Do you + your love dream of a fairy tale-inspired day…perhaps one where you say your vows in a castle? Well, you’re in the for royal treatment as we’ve rounded up these gorgeous châteaus that double as wedding venues! Whether you want to invite all your friends and extended family, or keep it small and intimate—we’re pretty sure you won’t be able to resist their charm!

Oh, and for those that think all the cool castles are located in Europe and you *wish* you could find something in the States…don’t you fret! We even found a few U.S.-based beauties! Without further ado, we invite you the explore the grounds. Let’s take a look!

Built in the 17th century, Château d’Effiat is a pretty dreamy spot to say your vows. Your reception can take place inside (incredible interiors!), or for a more relaxed, yet regal feeling—outside on the lawn. This venue is great for big parties as it can host up to 300 guests. Can you imagine just how magical a portrait in front of the château would be? Talk about a keepsake!

Château de Carsix is nestled within a beautifully landscaped estate in the village of St. Julien l’Ars—just south of the Loire Valley. Built in the 18th century, it combines the charm of rural location with the fine construction the nobility was known for.

Does the French countryside call your name? Do you imagine yourself road tripping through the Burgundy region and sampling all of their rich wines? Tucked away in a little town of Morlet in the Burgundy region is this darling gem. Château de Frétoy, which was built in the 1900s, was a gift to the French actress, Cecile Sorel, from her romantic partner at the time. Quite the gesture, no?

photo: Lifestories as seen on GWS in this wedding

You may recognize these dreamy photos from the Margo & Me wedding! The grand 16th-century Château d’Esclimont is now a luxe hotel and isn’t too far from the Cathédrale Notre-Dame de Chartres.

It’s said to be the oldest hotel in Italy, the historic La Badia di Orvieto is a former Benedictine Abbey and dates back to 1100. The classically furnished antique rooms will take you back to another time with their 14th-century frescos, and there is an on-site 12th-century Romanesque church and tower…which makes for the dreamiest location for a reception, in our opinion! If that’s not enough, the surrounding hills of the Umbria region are sure to stun while you cozy up in the ancient ruins under fairy lights.

Castello di Vincigliata is a dreamy Tuscan castle in the hills overlooking Florence that dates back to around the 1000s—but don’t you worry, it’s been renovated since then! The walled courtyard can seat up to 120, and there is a formal garden and large terrance for dancing and drink. Alternatively, there is another structure that can seat up to 300 guests; however, the rooms in the castle and small and best suited for small, intimate weddings…but that just encourages your guests to get to explore the region, of course!

Manorbier Castle is a fairy tale with its romantic setting by the sea (within 100 years of the beach!). You can enjoy the gardens, the impressive Great Hall, and the old vaulted chapel. The location offers a variety of options for weddings depending on the number of guests.

photo: From the Daisies as seen on GWS in this wedding

Looking for a castle with some ruins? Craigmillar Castle in Scotland is pretty spectacular. Here’s a little fun history for you: Mary Queen of Scots is said to have slept there in the so-called Queen Mary’s Room! The majestic charm of the castle has lasted through the ages and the surrounding city of Edinburgh isn’t too bad either. ;)

Eilean Donan Castle is a 13th century castle in the Highlands of Scotland. Situated at the point where three great sea lochs converge, and surrounded by stunning mountain scenery, Eilean Donan has become one of the most iconic images of Scotland and is recognized all over the world.

Hello, pink dream! Craigievar Castle is what fairy tales are made of…don’t you think? Surrounded by extensive parks and open woodland, Craigievar is ideal for intimate weddings or up to 100 on their grounds. We haven’t shared a real wedding here yet, so if you get married here, please share photos with us, we’d LOVE to see them! :)

Easily one of the most dramatic places to exchange your wedding vows in Northern Ireland, these medieval castle ruins, located atop a craggy cliff is home to the mythical “Mermaid’s Cave,”—which lies underneath an arched walkway and connects the castle to the mainland.Though the castle does not permit ceremonies to take place inside the ruins themselves, you CAN hold a ceremony in one of the surrounding farmer’s fields outside of the castle walls—for a small fee. Talk about a stunning backdrop! And, for GoT fans, this is the site that served as the home of Castle Greyjoy.

photo: Priscila Valentina Photography as seen on GWS in this elopement

This 83-room hotel was first erected in 1228 and today, guests can take a step back in time as they overlook the peaceful countryside and surround themselves with medieval-style architecture. Ashford Castle can accommodate over 160 guests for weddings and is also a state-of-the-art spa—so you + your wedding party can be completely relaxed! Oh, and did we mention it’s the former home of the Guinness family?

While The Unfinished Church isn’t technically a castle, we felt that it sort of blended well with some of the ruin venues featured in this post and didn’t want to skip over it! This impressive Gothic venue was begun in 1870, but was abandoned in 1899 when it was near completion. Today, it looms over the town of St. George and beckons for all to come take a peek…

While there aren’t quite as many amazing castles here in the US, we did find a few gems to get those castle vibes for those of you planning a wedding stateside….

Lyndhurst Mansion is a Gothic Revival country house (that quite honestly looks more like a castle), built in 1838, and is *cozy* in its 67-acre park beside the Hudson River. Note: It is closed during winter months…because nobody wants to deal with chilling temps!

Looking for something with an Old World sort of feeling in Los Angeles? The Hollywood Castle certainly fits the bill with its breathtaking views and unique stylings. It’s surrounded by gorgeous gardens and hidden away amongst the Hollywood Hills, yet it feels like a British castle!

photo: Nirav Patel as seen on GWS in this wedding

Who would’ve guessed that you can find a European-style castle in Southern California?! Kimberly Crest has over six acres of beautiful Italian style gardens, the grounds include curved stairways, waterfalls, koi ponds, a rose garden, and terraces that are over a century old.

Talk about balling on a budget—the Gillette Castle in East Haddam, Connecticut can be booked for outdoor ceremonies for $285! The 184-acre estate has a three-mile trail that loops around the grounds and a bunch of original oddities from when it was built as a home for the actor, William Hooker Gillette in 1919.

Where, oh where in the world would you like to say your vows? Know of a cool castle that allows weddings? Feel free to share in the comments below! 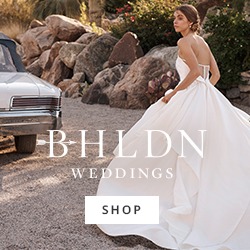