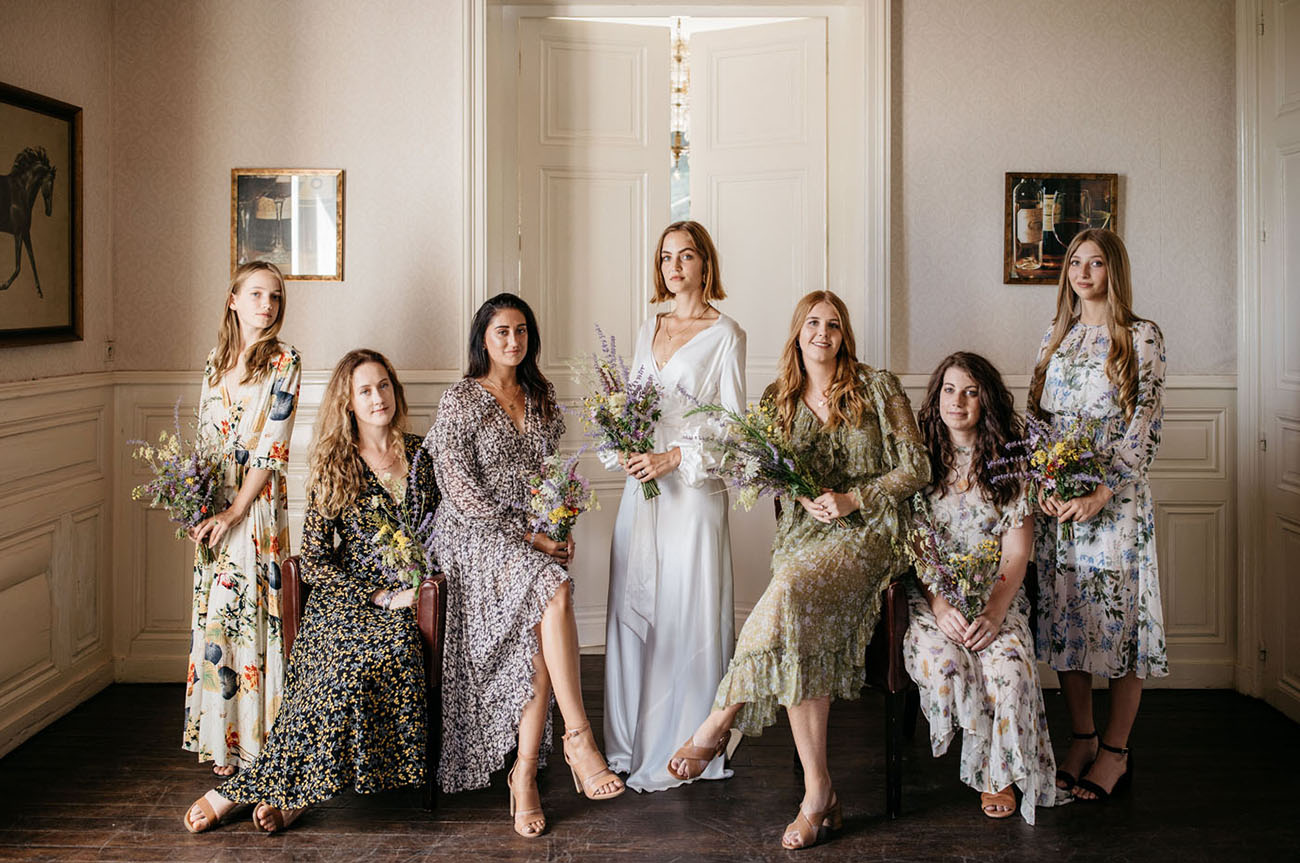 Does the French countryside call your name? Do you imagine yourself road tripping through the Burgundy region and sampling all of their rich wines? Bronte + Josh imagined just that and said their vows at Chateau de Fretoy in the small town of Morlet, in the Burgundy region. For three days they were joined with their friends and family who came from all over France and Australia (Josh’s family is Australian, while Bronte’s family is scattered about France—from Paris to Cannes).

Paying homage to both places, her dress was a combination of a Parisian designer, A La Robe, and an Australian designer, Lola Varma (from Perth). How sweet is that? Bronte shares with us: We spent 3 nights in the castle with 45 guests and feasted on local produce and wine from the surrounding vineyards. We had 75 guests on the day of the wedding and the day started with a friendly game of tennis between me + Josh, we then picked flowers in the surrounding fields for the bouquets, had the ceremony, and vin d’honneur and dinner followed.

Ready to explore the castle grounds? Let’s take the grand tour in the photos snapped by Lifestories: 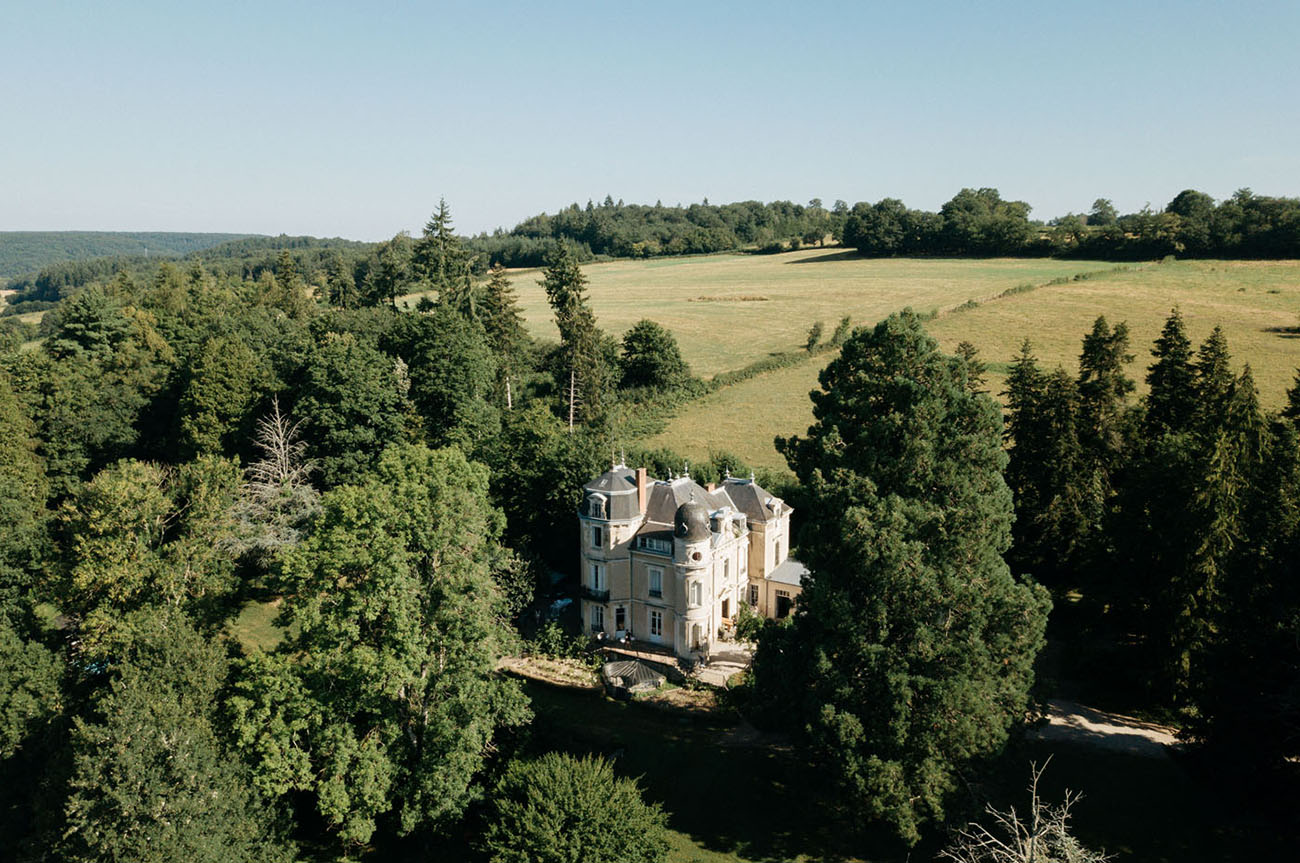 The castle, which was built in the 1900s, was a gift to the French actress, Cecile Sorel, from her romantic partner at the time. Quite the gesture, no? 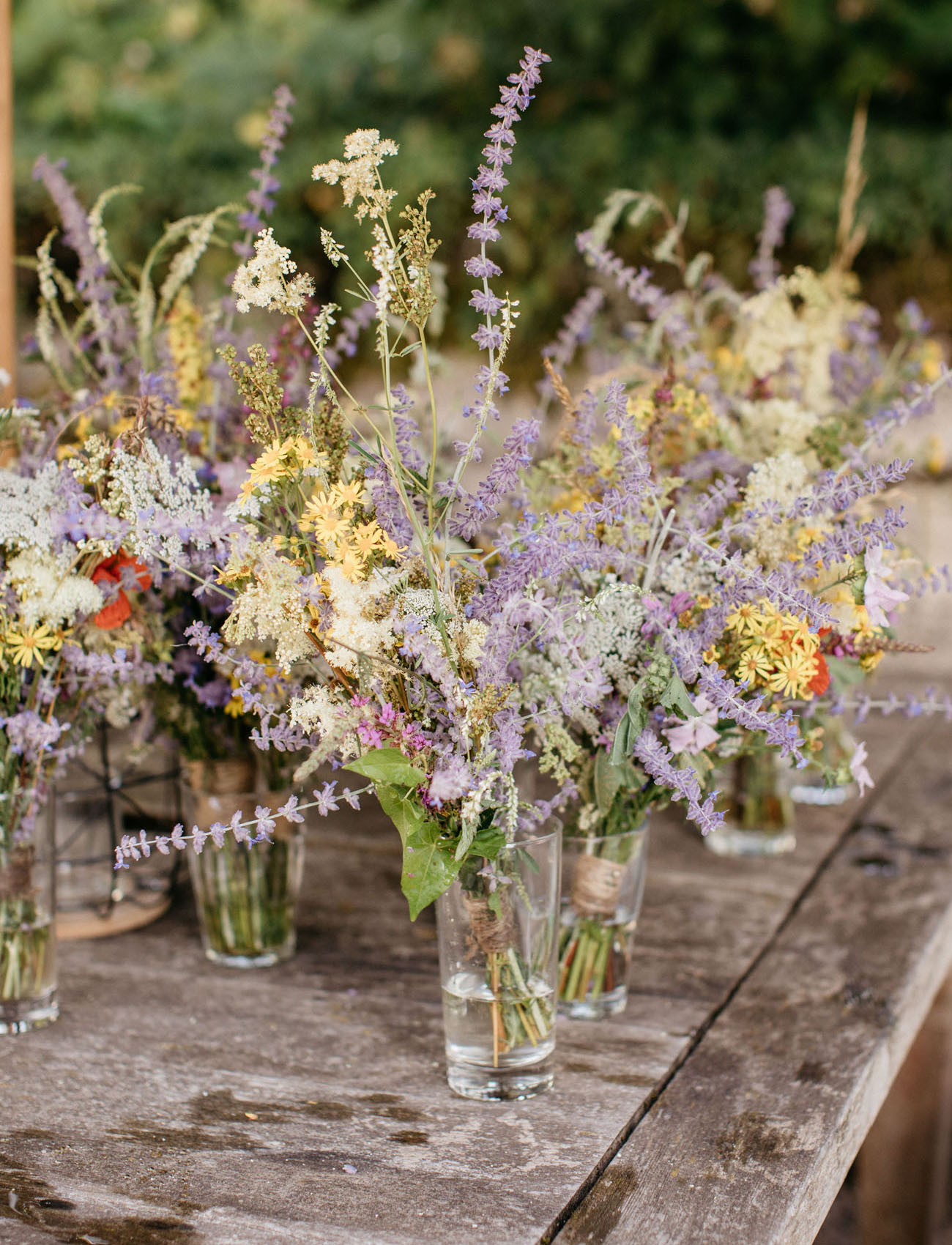 All the florals for the day were picked from the surrounding fields. Doesn’t that sound like a dream? 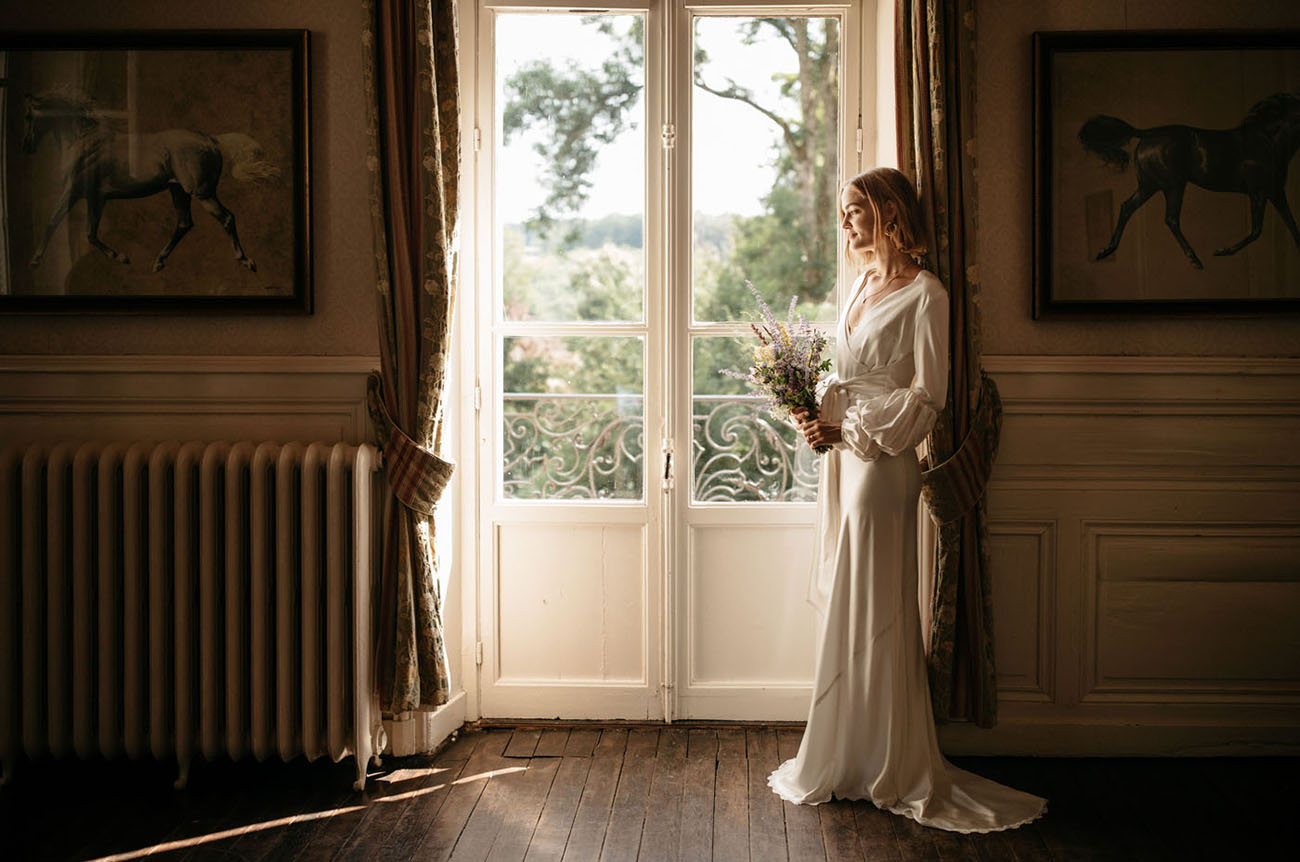 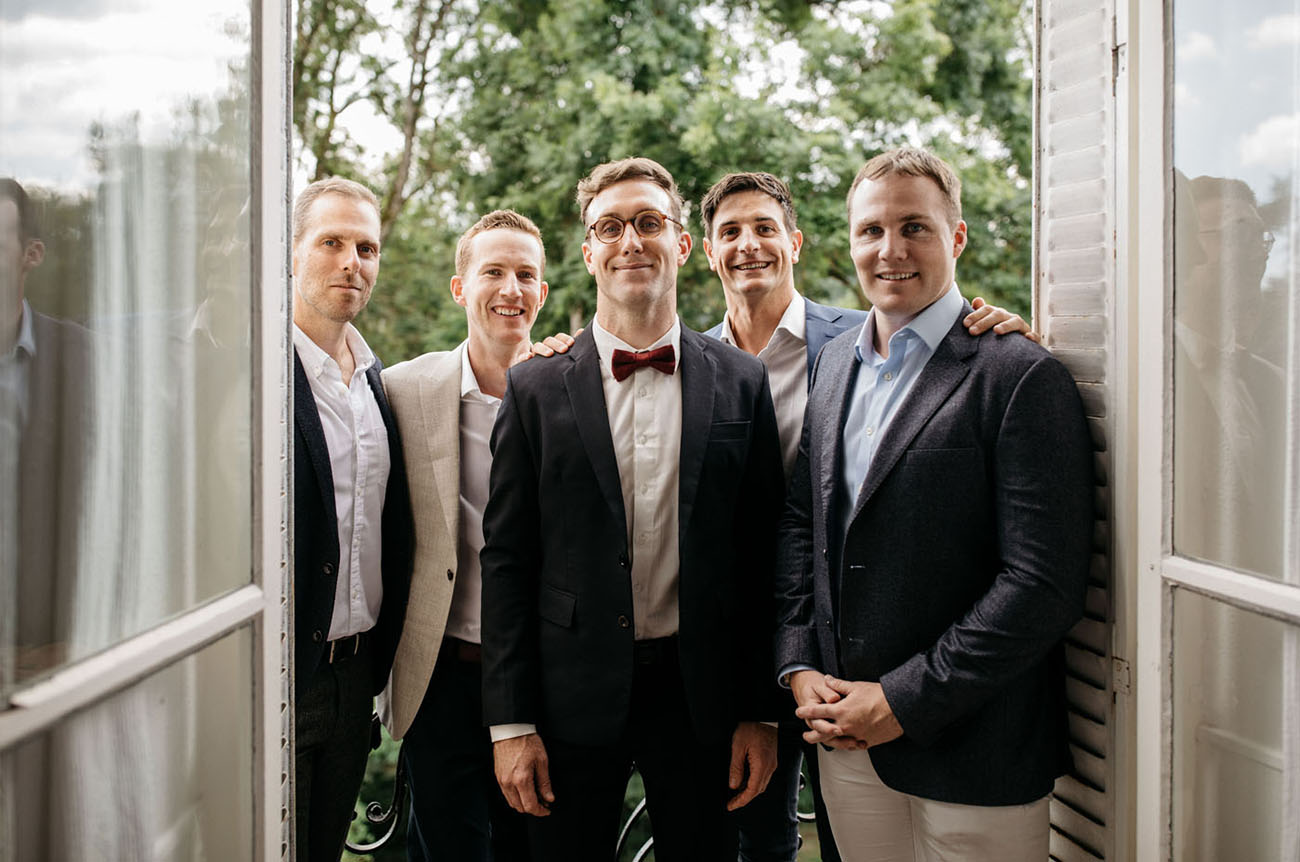 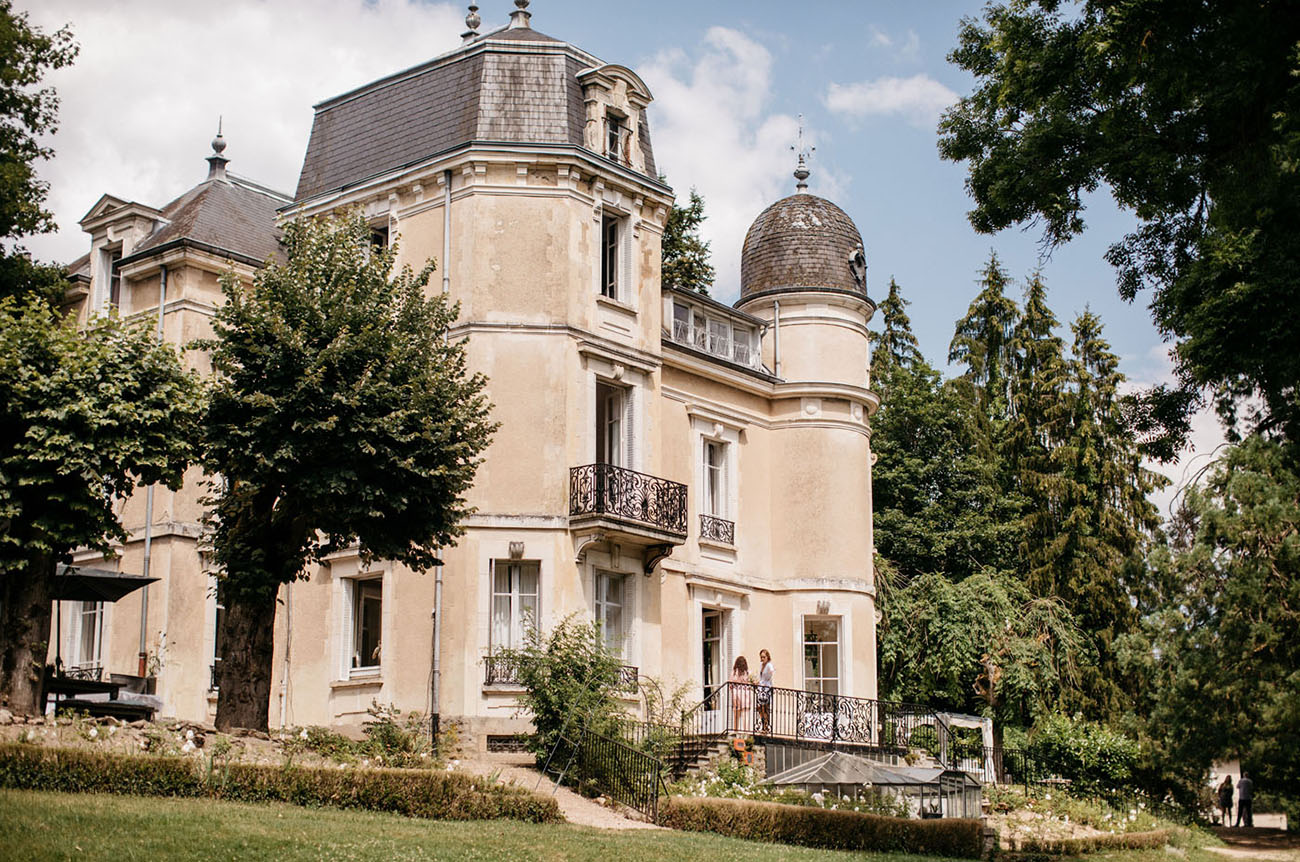 The tone was set instantly with a swinging jazz band playing in the tea gardens of the chateau as the staff served cold drinks and small plates of food. It was a great way to walk around and have a chat with the guests before the ceremony started and for the guests to unwind a little. 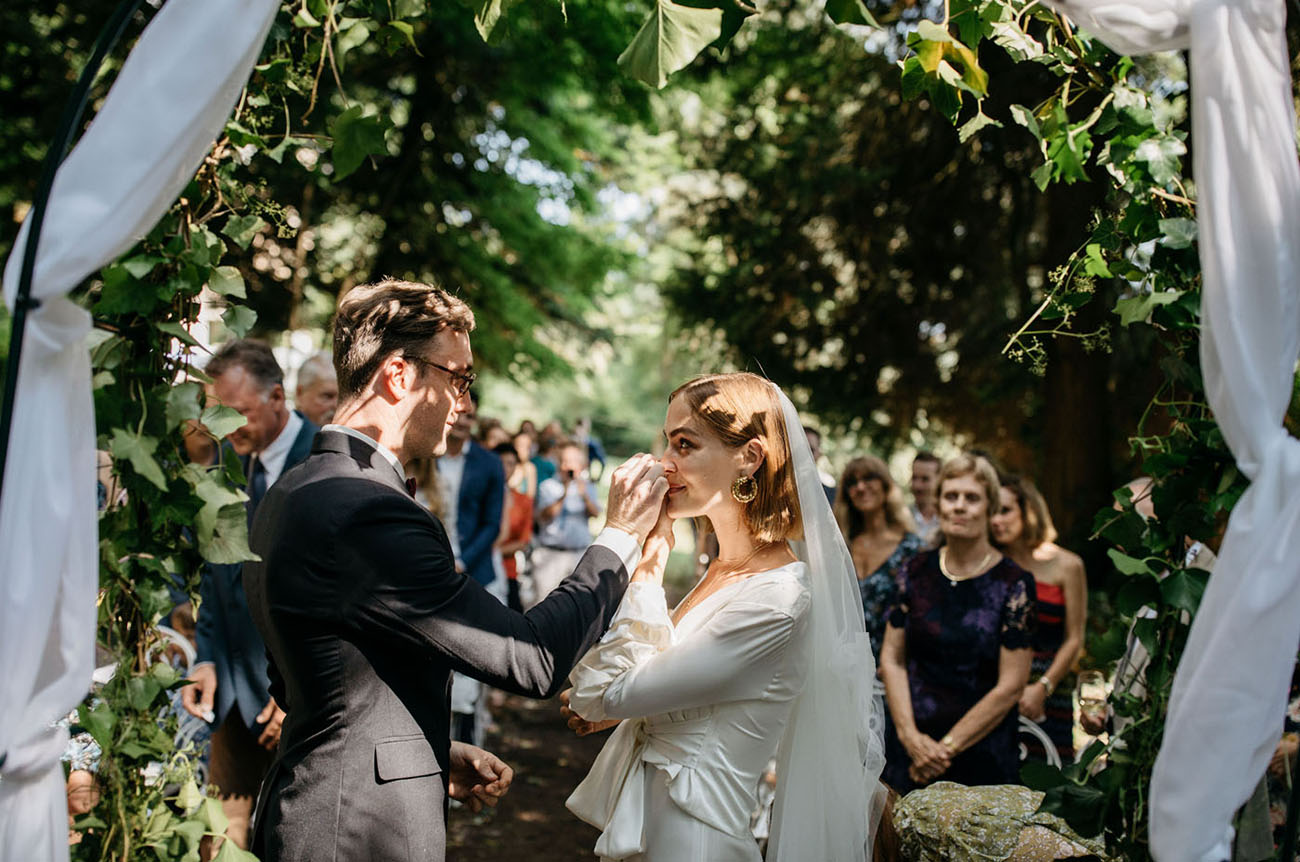 As Bronte walked down the aisle following in the path of her bridesmaids, my emotions took over. We were both in tears and couldn’t stop smiling at each other, as we looked at each other and the adoring eyes of our loved ones. The ceremony was very personal and in both French and English. We had both written our vows, which was a lovely touch as it gave us an opportunity to announce our love to each other in a way which we often take for granted. When else do you get to tell each other why and how you love each other in front of a small audience with your own words, it is an extraordinary thing and I’m glad we did so, as opposed to reading a passage of someone else’s words. And although it was a blur at the time, it is undoubtedly the most memorable moment of the day. 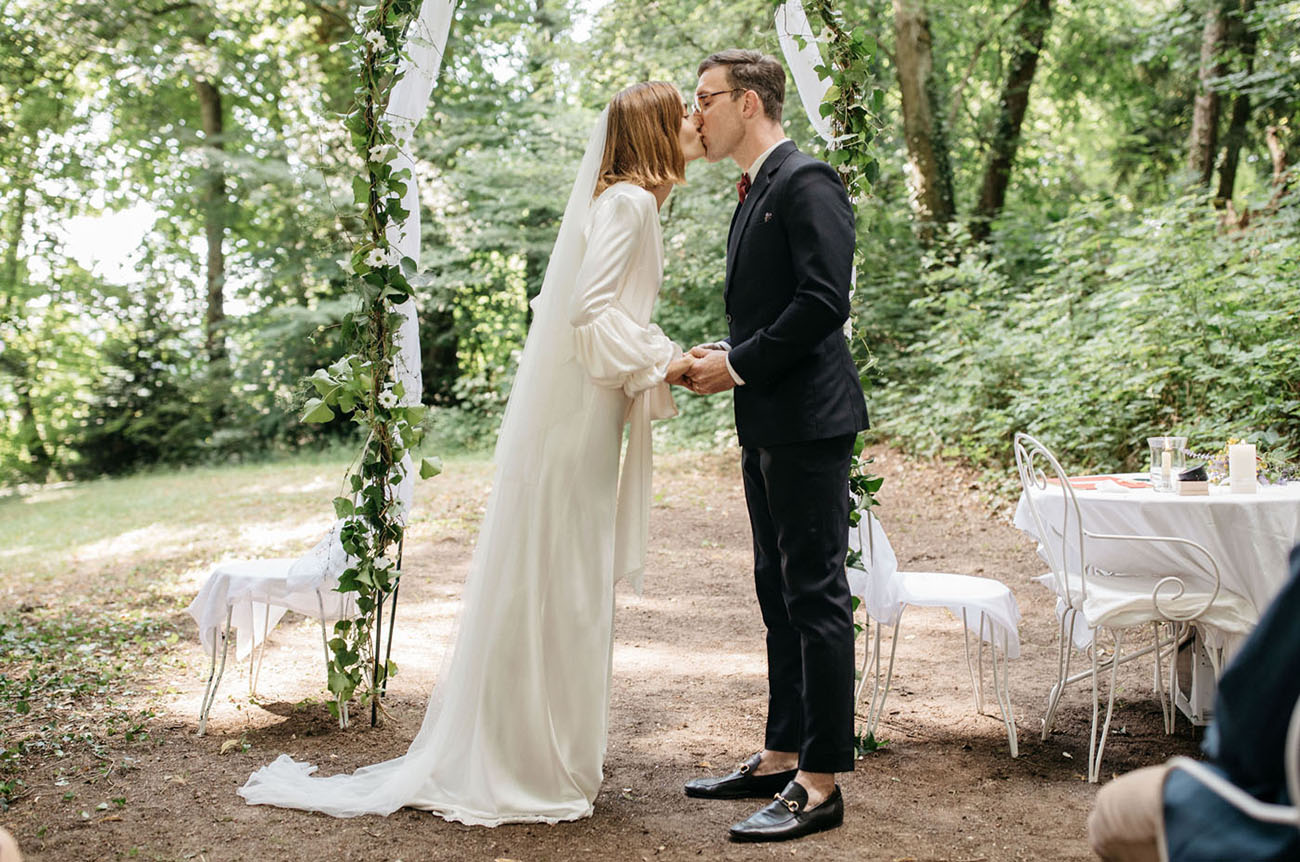 Josh shares: Bronte has always had an excellent eye for detail, and we are both of the opinion that some things are best done by yourself. It’s also a great way to personalize an event like the wedding and be part of the process during the day. We walked through the chateau grounds and surrounding fields with a few friends, picking flowers and plants that were native to the region.

Before long, we had a considerable quantity of beautiful lavender, poppies and other varieties which we made into bouquets, table arrangements and decoration for the arbor—under which we were married. It was a great way to have our personal touch to the wedding, too. 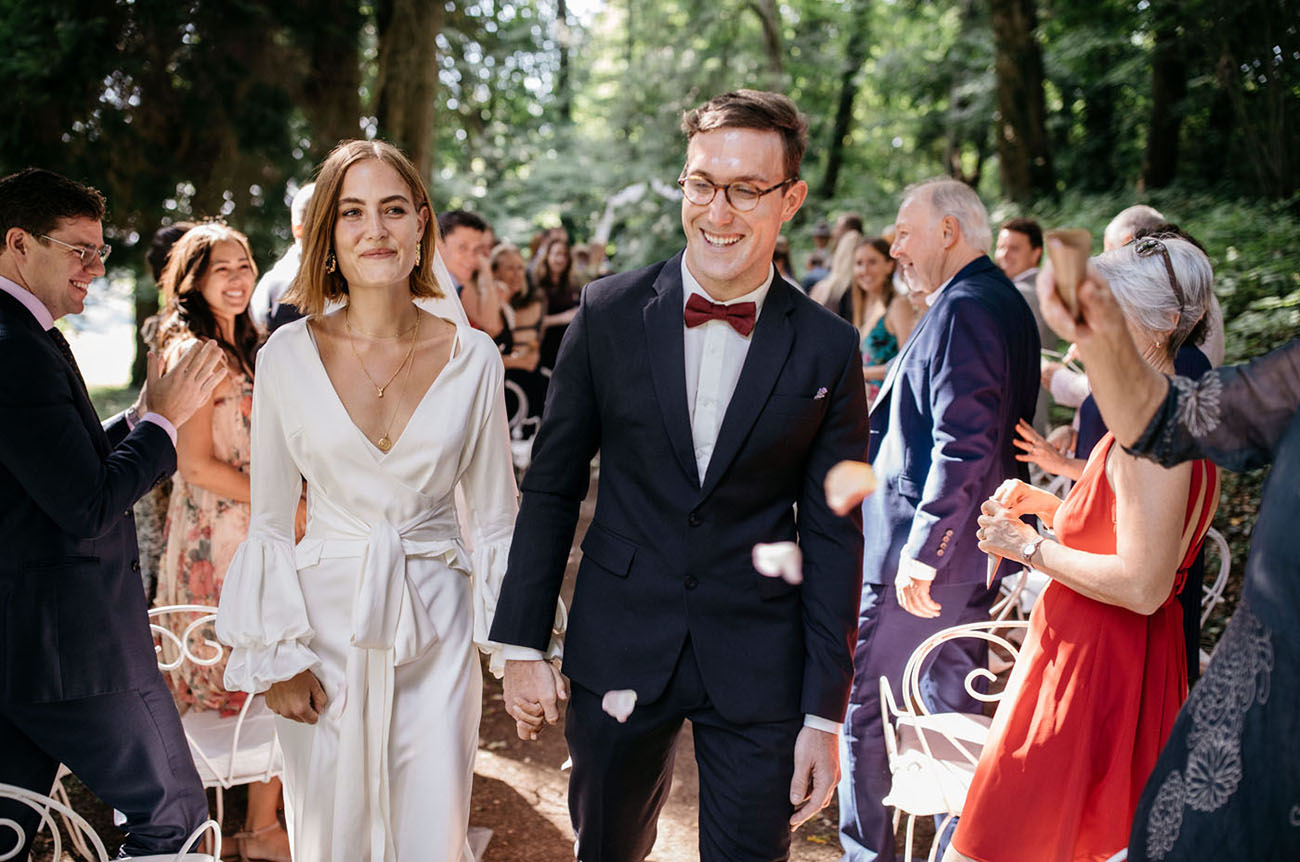 Do you love mismatched dresses of the bridesmaids as much as us? These gowns were a mix of Zimmermann and Ganni. 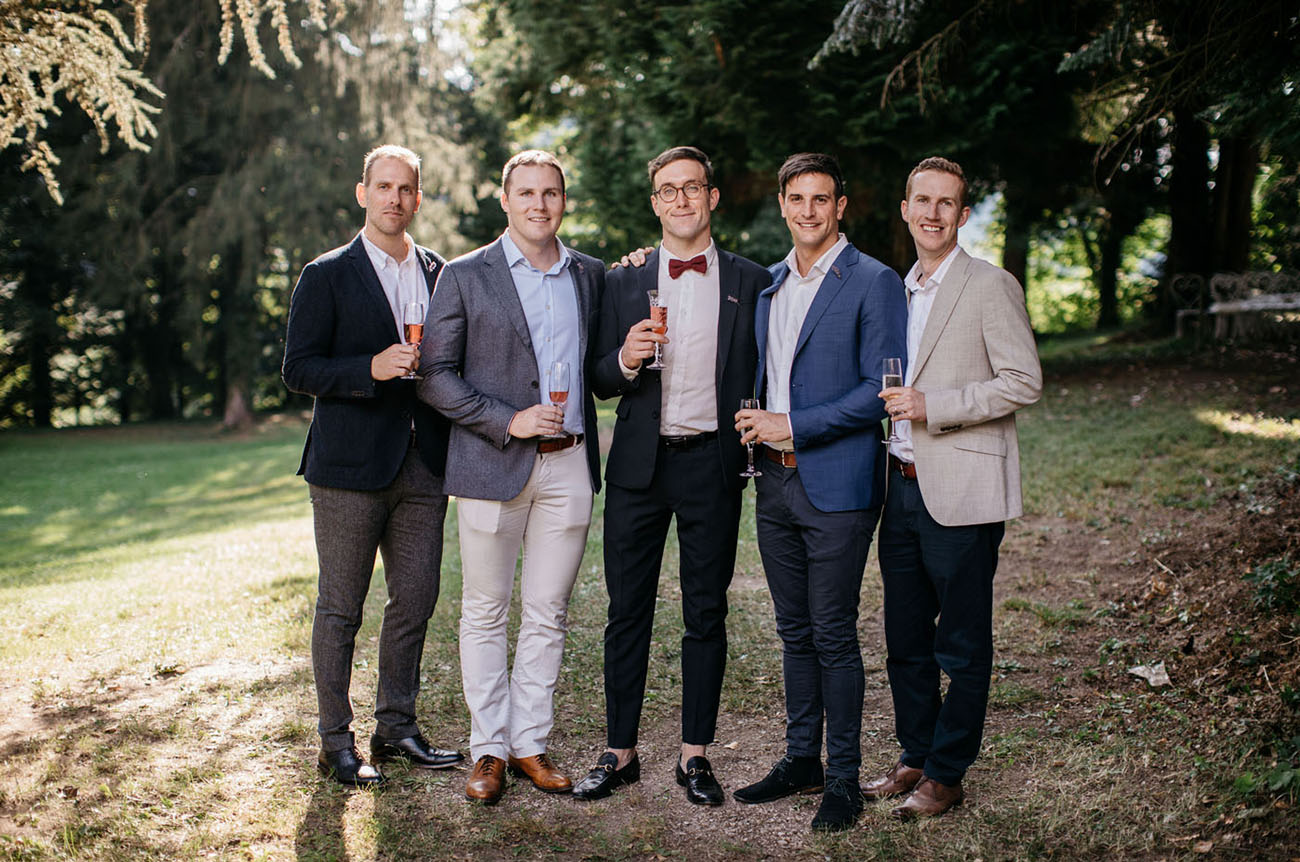 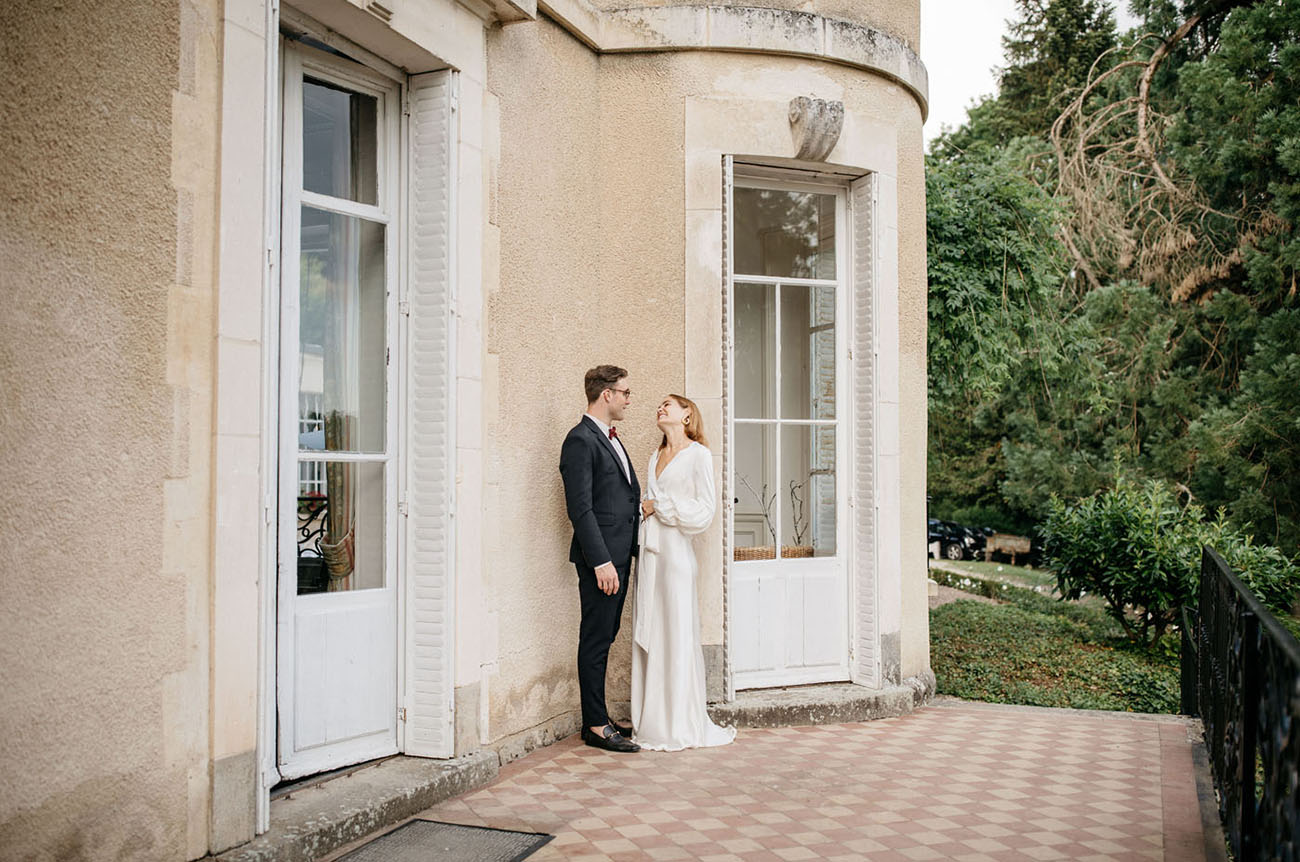 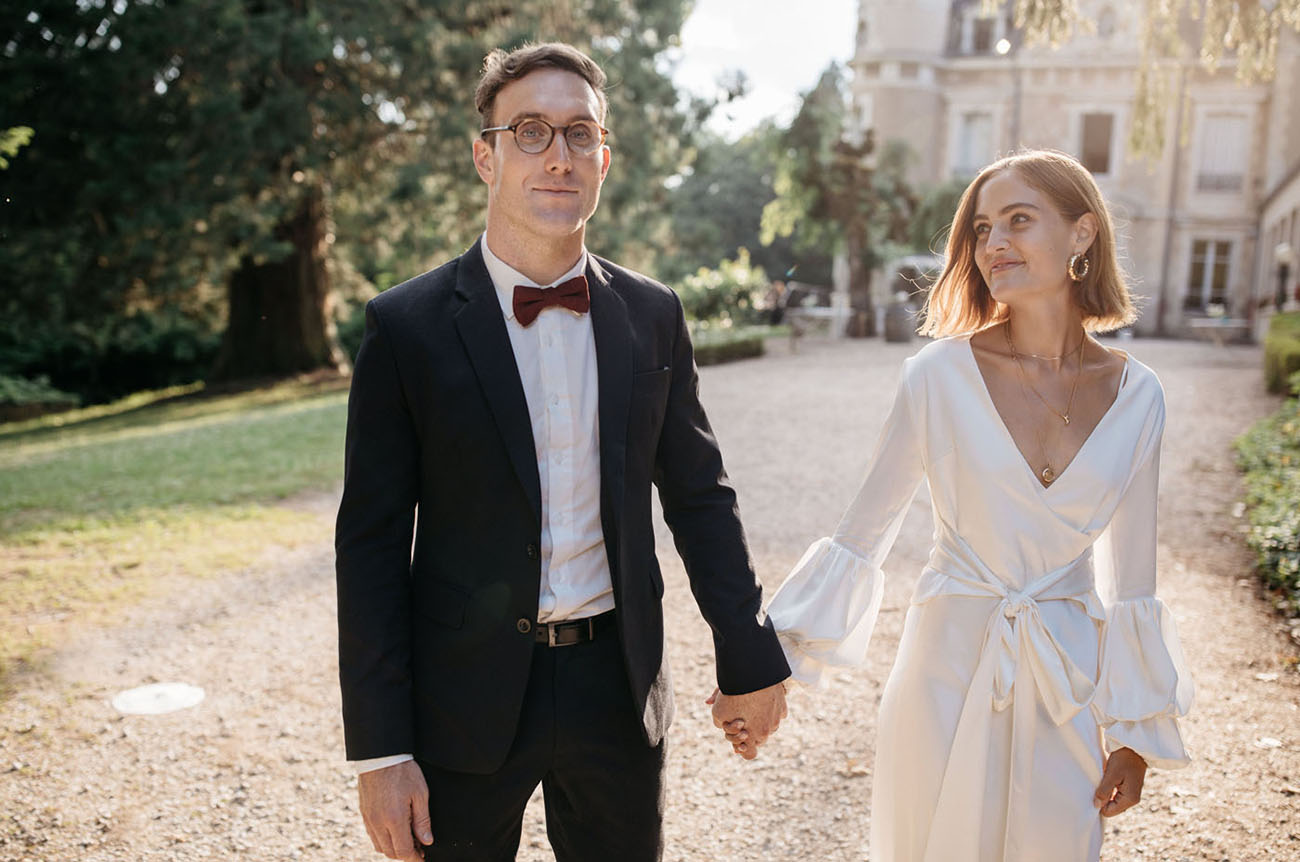 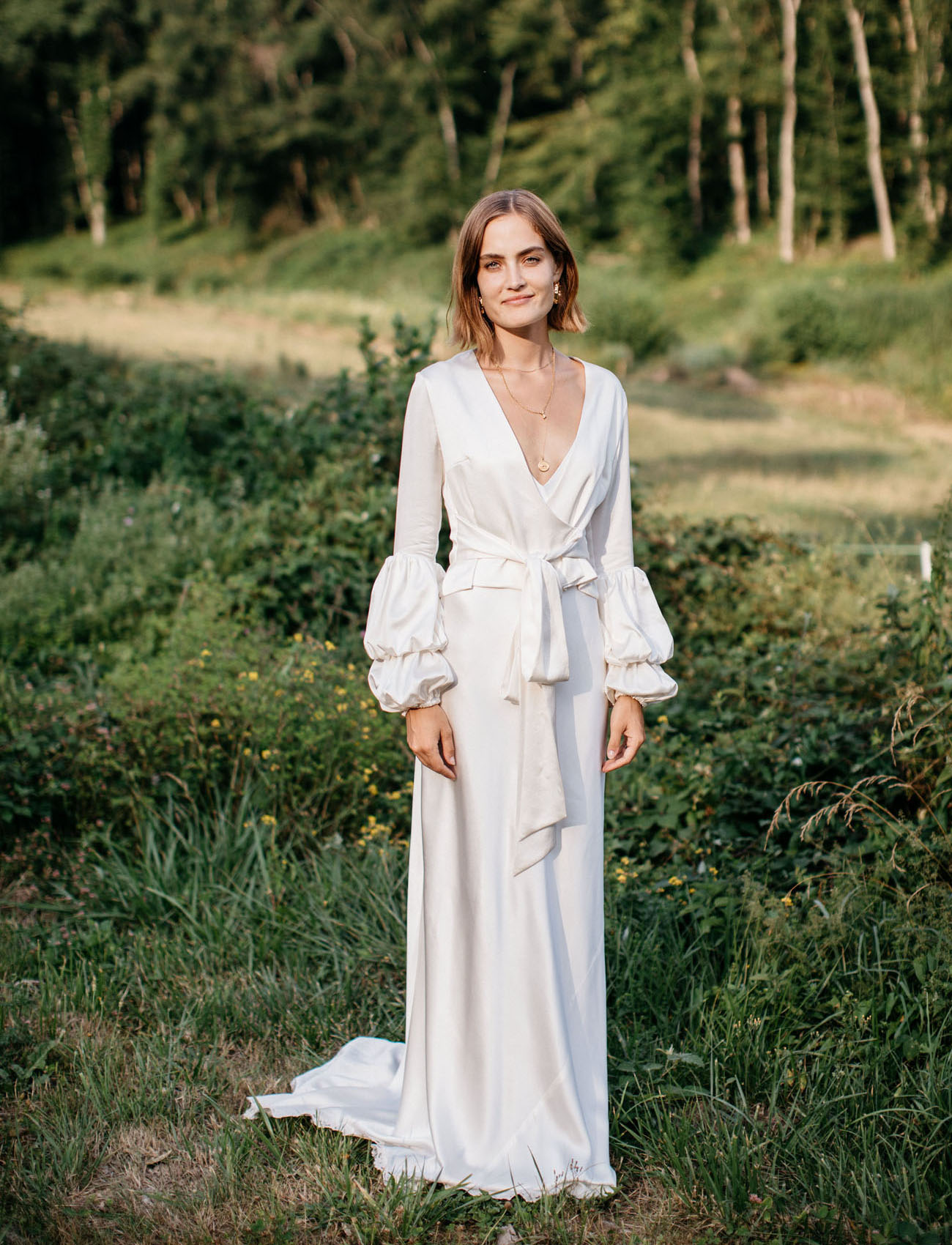 How sophisticated is this bridal look?! Bronte tells us: My dress was a combination of Parisian designer, A La Robe, and Australian (Perth) designer Lola Varma. My earrings were a pair of vintage YSL bought from Vestiare. 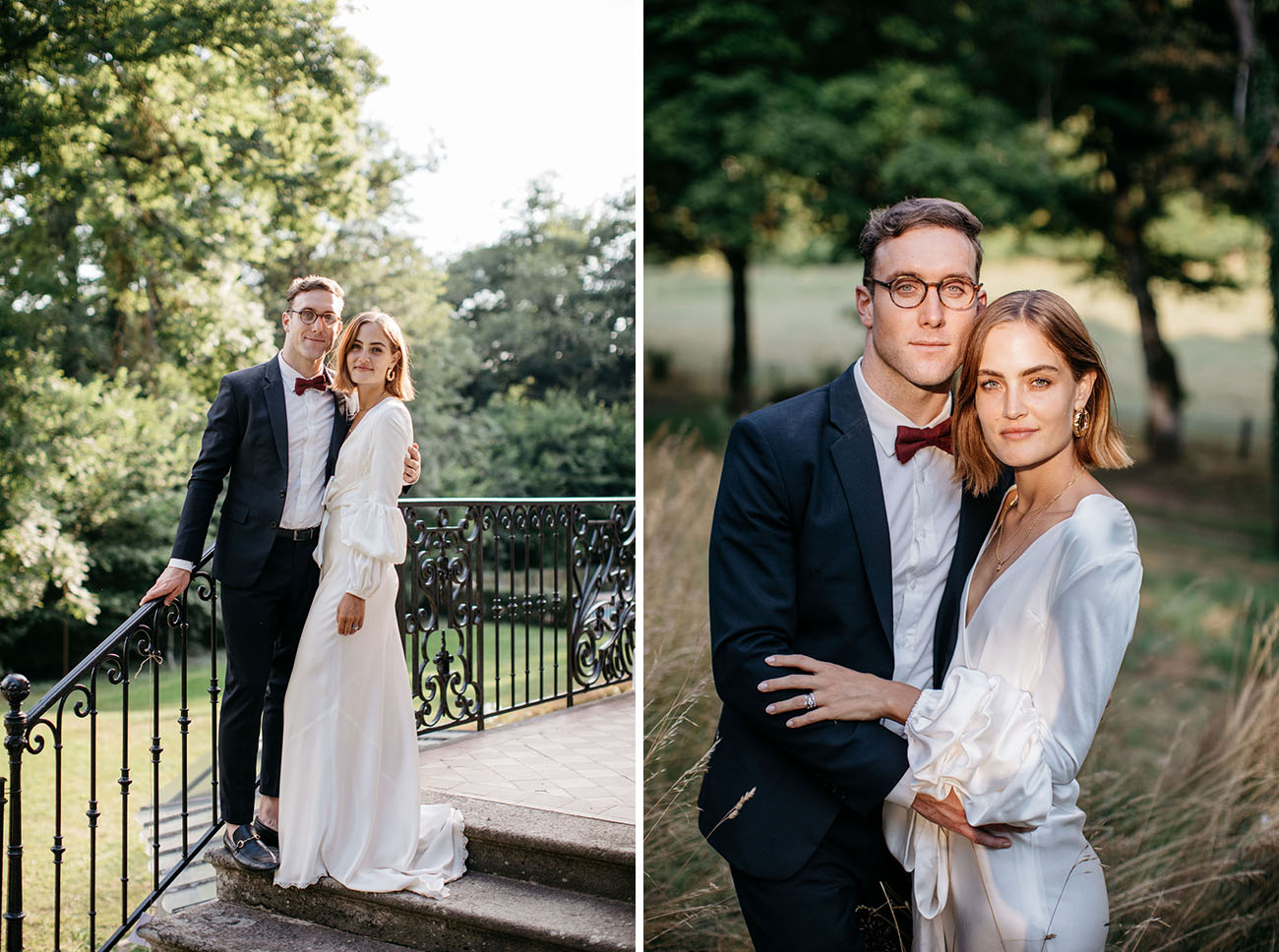 We both woke up excited with the prospect of sharing our special day with all of our family and friends and had agreed the night before to wake up early and play a game of tennis.

They both admit that they were not great at actually hitting the ball over the net, but it made for a memorable way to start off the big day! 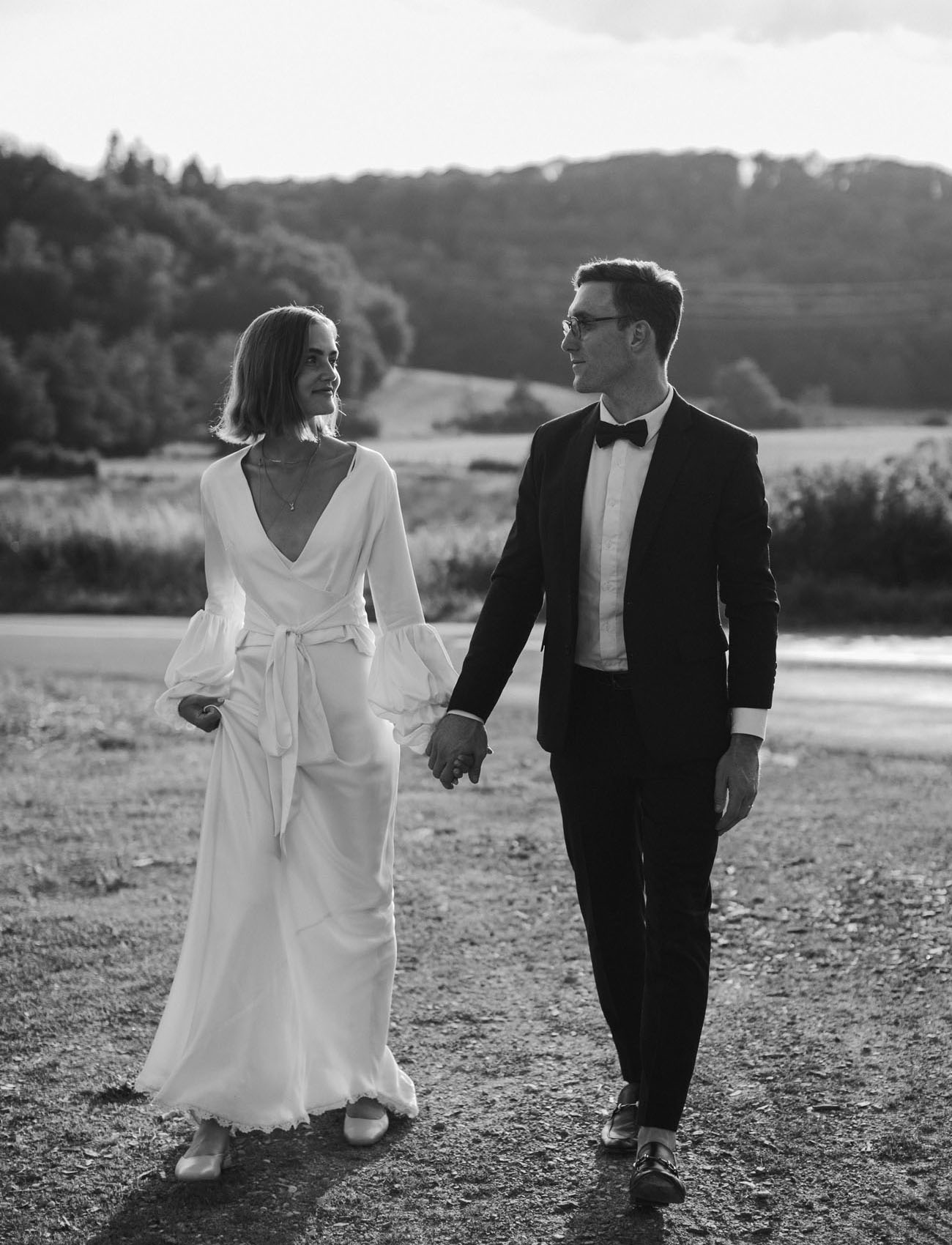 What better way to end the evening than with dinner in the garden? 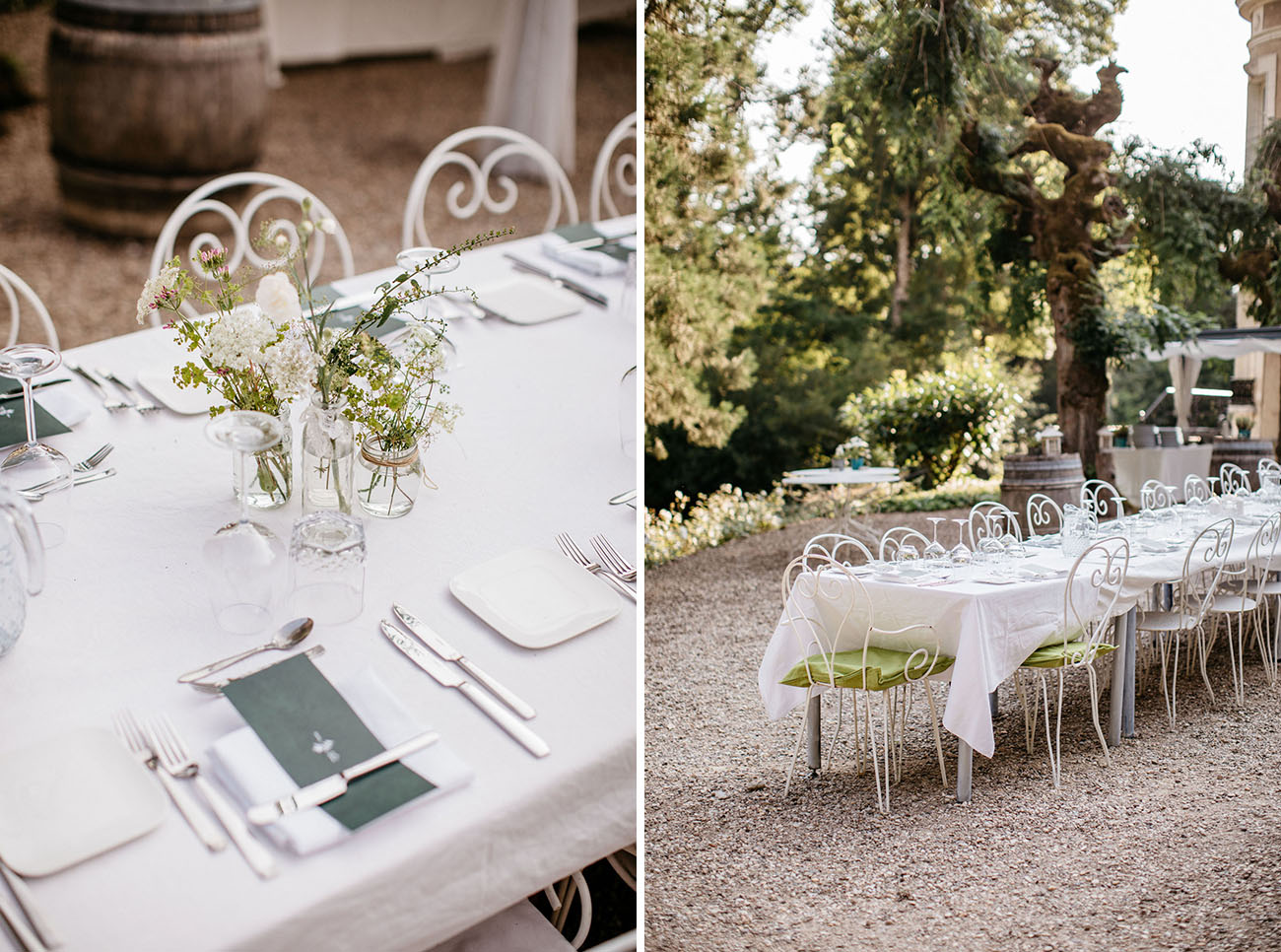 The two leave us with these parting words: With such a small wedding it was easy to have an intimacy that a lot of weddings miss out on. Everyone who attended wanted to be there and were old friends and close family. Knowing the efforts that many had come to join us on our day was humbling, and we both broke down multiple times before, during and after the wedding in recognition of family and our love for one another. It is a fantastic feeling to share something so special with people you genuinely care about and who care about you equally.

Congratulations to the both of you!