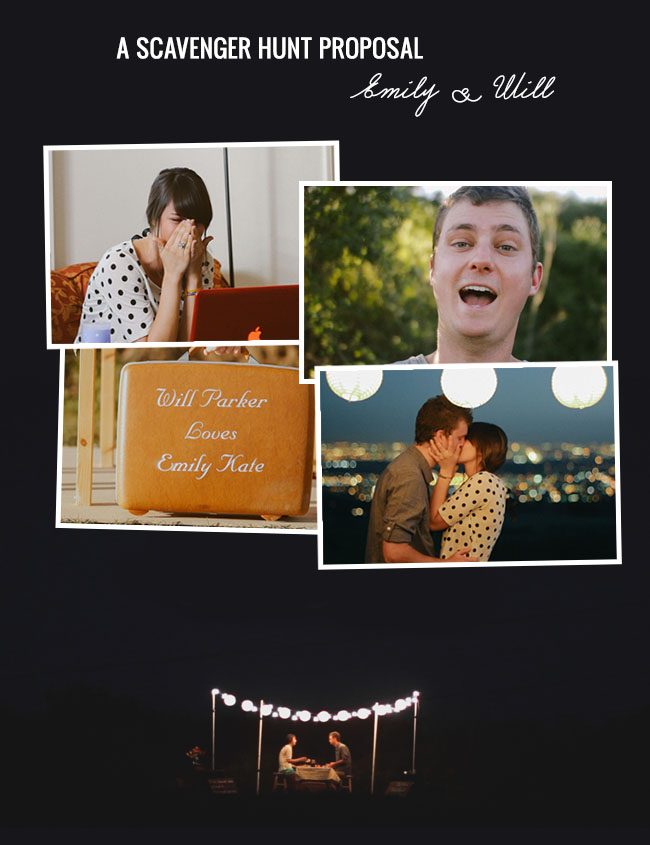 One of our most favorite things here at GWS is watching proposal videos – there is just something so real and emotional about the events leading up to that important question. And while we might often tear up while watching them (warning for the video below!), today’s proposal video sent over from Love Shot Productions is seriously the sweetest!

The story behind the film as told by Love Shot Productions:

5 days before he proposed, Will contacted us. His request was simple: Make me the coolest wedding proposal film you can think of!! This Friday I am asking the girl of my dreams to marry me. I’ve been planning this day for months. I don’t want to forget this moment!

Our interest was peaked, this looked like a really cool story to tell. However, what sealed the deal was when Will sent us over the timeline of the day. Upon opening the timeline we saw “Wills EPIC scavenger hunt” plastered across the top. From that moment on we knew this was going to be an adventure we couldn’t risk not capturing!

Will and Emily’s relationship is built on adventure. They both would rather plan something amazing for each other than go to the store and buy each other gifts. This personality trait is what inspired Will to create a proposal wrapped up in an Epic scavenger hunt.

The premise was simple. Emily would arrive at Wills house thinking they were going on a simple date. She would watch a film made by Will telling her they arn’t going on a date but instead she is going on a scavenger hunt. For the next 7 hours Emily would trek across the city collecting clues to eventually end up on a gorgeous mountain top where Will would be waiting for her.

When we talked to Will, we quickly realized that this day and his relationship with Emily was made possible from the help of so many other people. We really wanted to bring this out in the film. That is why we asked Emily’s best friend to film parts of the day with her iPhone. Sure this was unconventional and risky but it provided us with some amazing authentic footage of Emily hanging out with her best friends. We also made sure to focus on Will’s friends who devoted their whole day and past weeks to helping him prepare for this amazing event!

One final emotion we really wanted to capture was anticipation. We did this by interviewing Will and asking him what he was feeling. It was awesome hearing his heart and we feel this really let the audience connect with the story and root for him. Another thing we did was mic Will up about an hour before Emily came walking up the mountain. By doing this we got amazing sounds bites of Will being nervous and excited. This helped the audience feel like they were right there with him!

Will and Emily’s story was a blast to tell! I hope you enjoy watching it as much as we enjoyed making it!

Biggest congrats to Emily + Will and thanks so much for letting us share your story today!