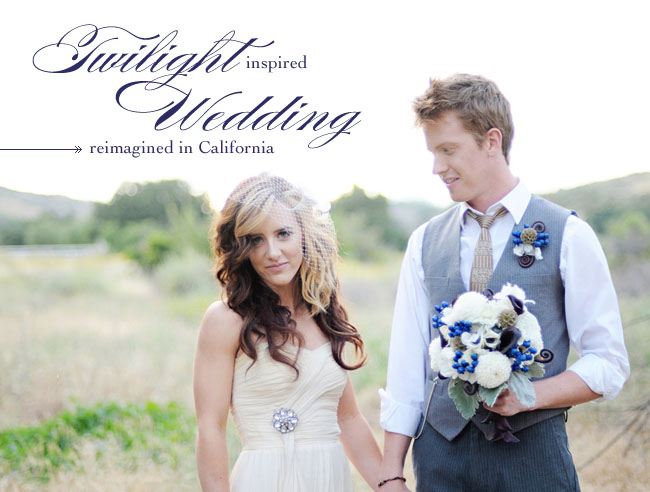 Ok, all you Twilight fans! If you’ve seen the trailer for the upcoming Twilight Saga: Breaking Dawn, you have seen some sneaks of the wedding between Bella + Edward. I LOVE the sneaks of the wedding – it looks like an amazing setting for a wedding. Well, Brienne (photographer) and Emilee (stylist) were also inspired by the upcoming wedding and decided to style a shoot around it – with a California twist along with some 1920’s art deco + vintage inspirations! I just love what they came up with. Not only is it beatuiful, there are some great ideas to steal for you brides planning right now. :) 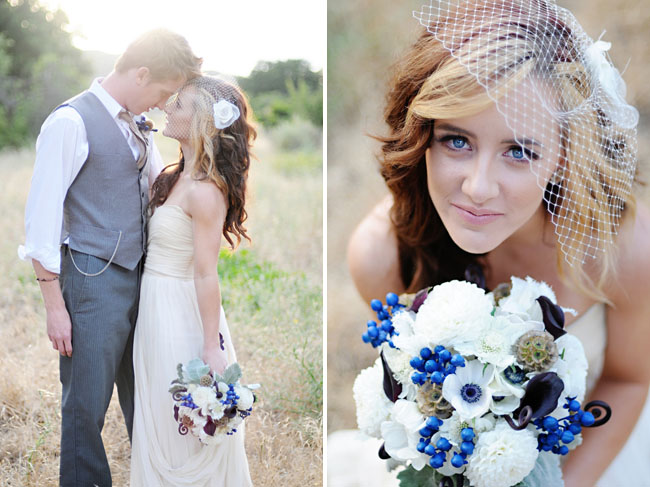 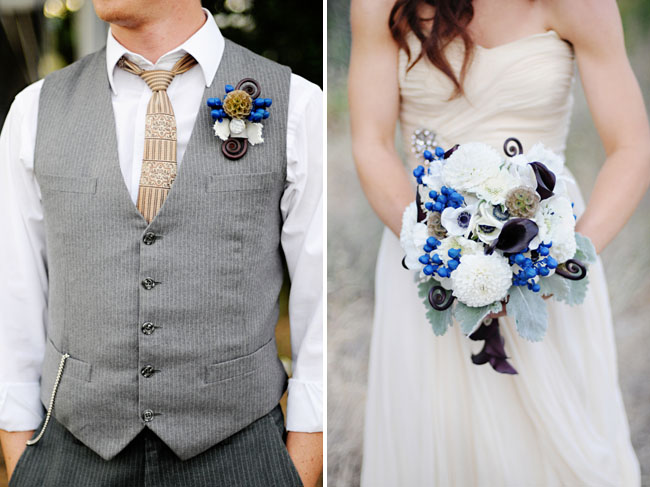 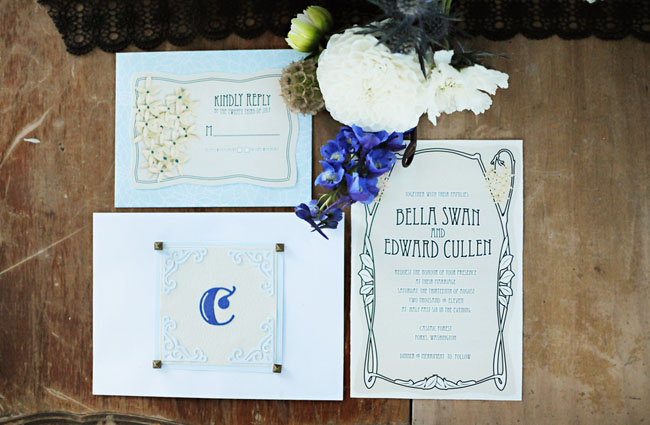 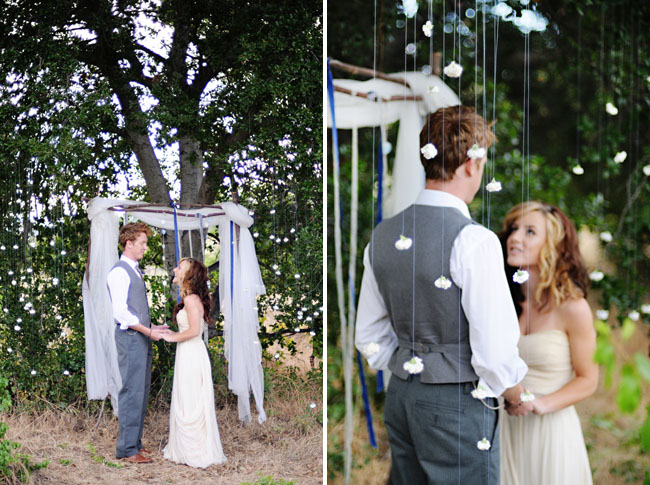 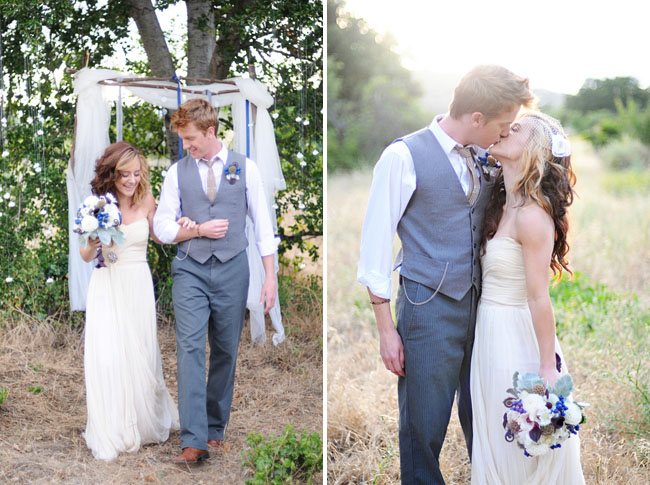 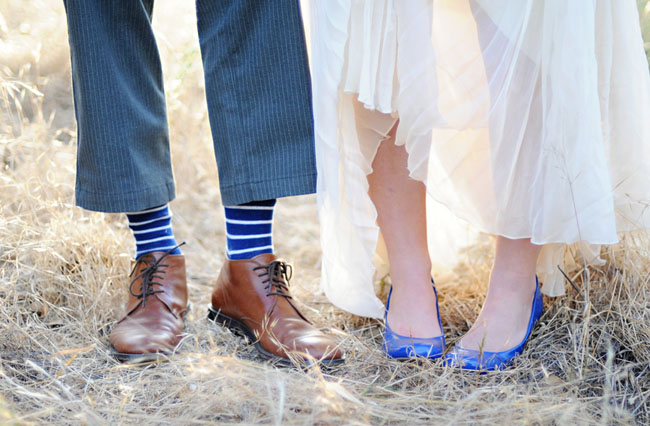 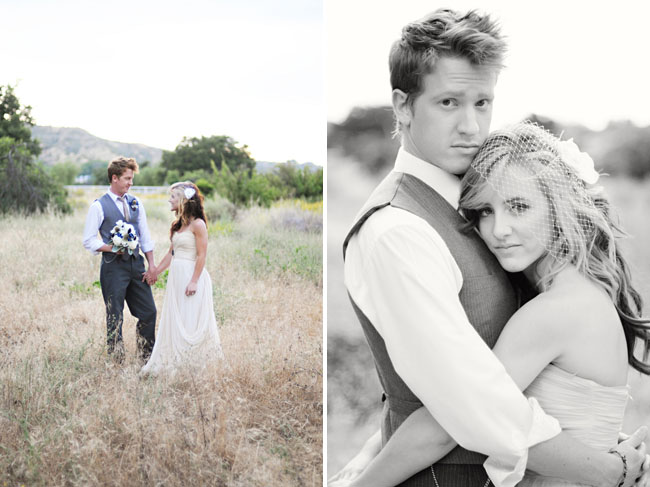 Certain elements of the shoot came directly from the book – the hanging flowers at the various locations, the art nouveau inspired details, and even the name cards were tied to chess pieces to reference the cover of the Breaking Dawn book. But from there they took some liberties. :) The color scheme was inspired from the hair combs given to Bella by her parents that contained sapphire stones. They interpreted the shoot with a bit more of a southern California feel, opting for a California “forest” of oaks and incorporating the colors of the forest into the design. I just love the natural palette of browns, whites and grays with pops of blues – so pretty! 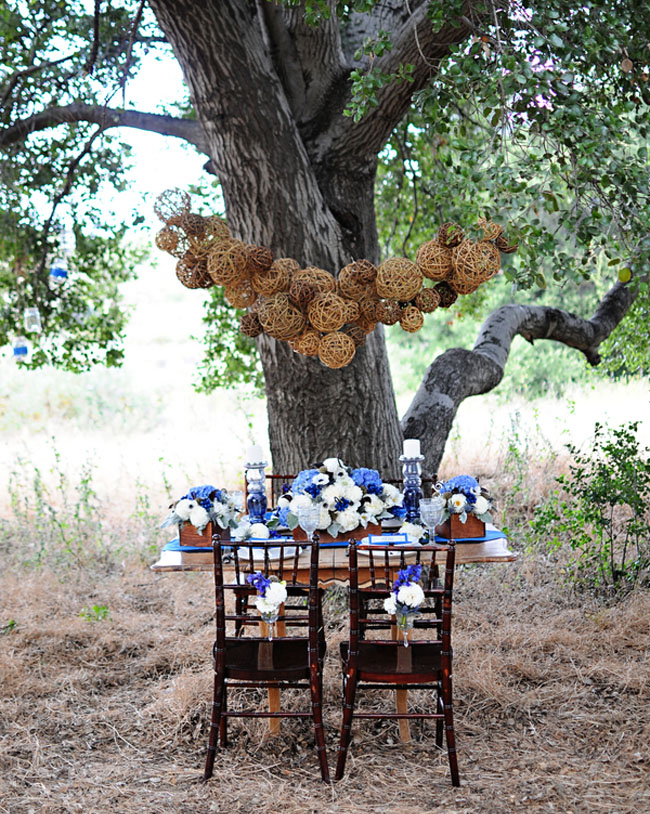 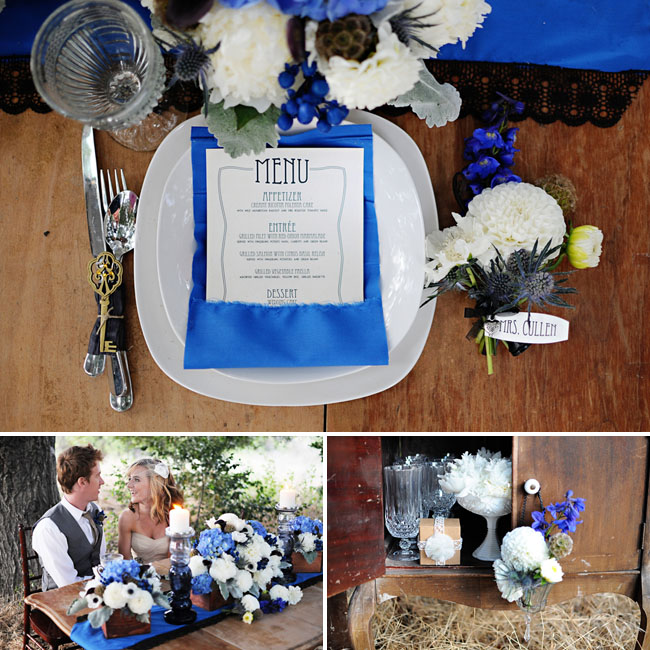 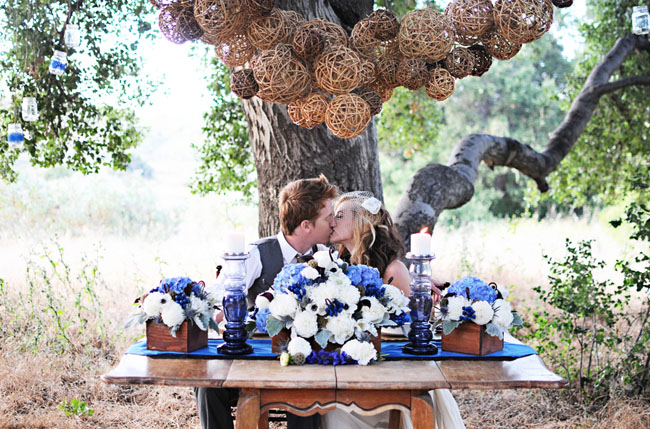 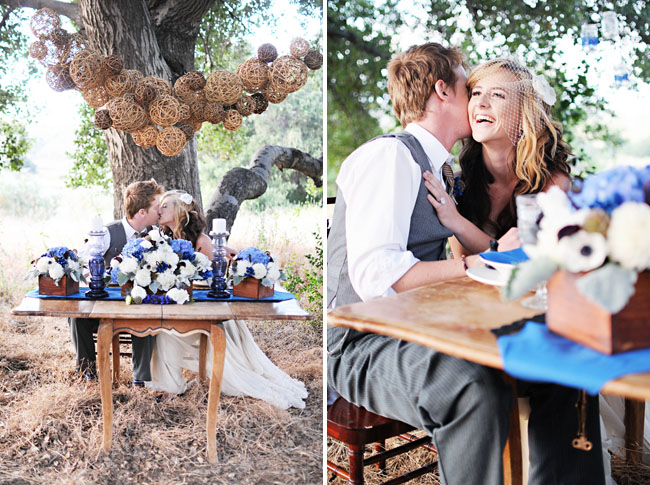 Love that the signature cocktail were Bloody Mary’s! 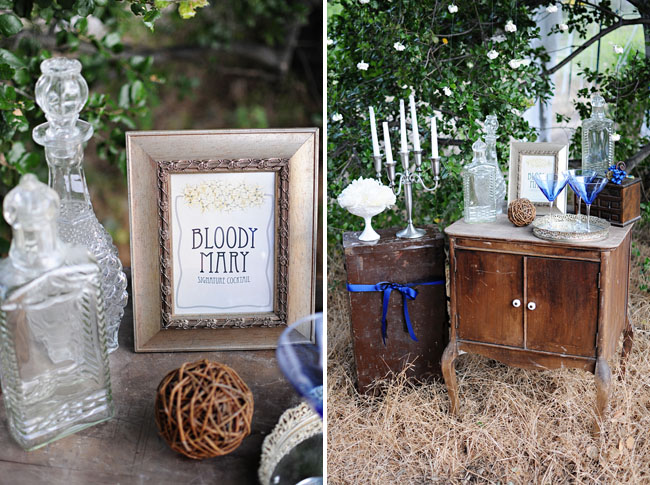 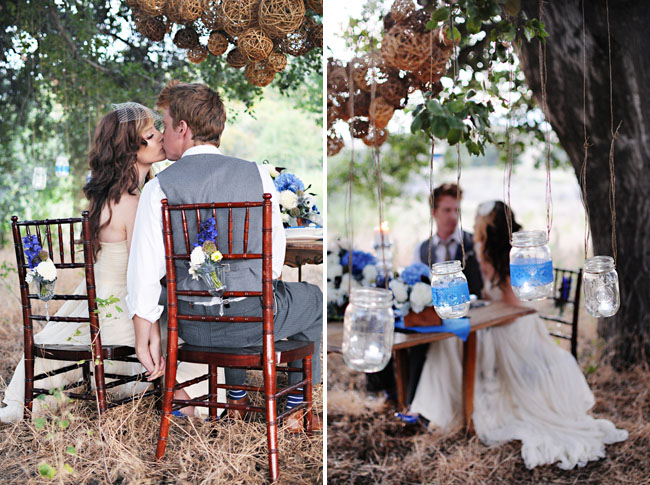 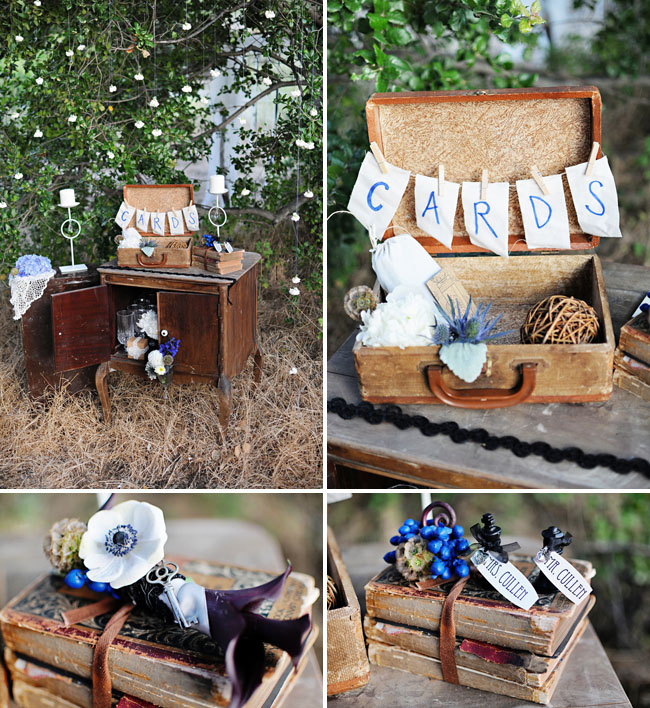 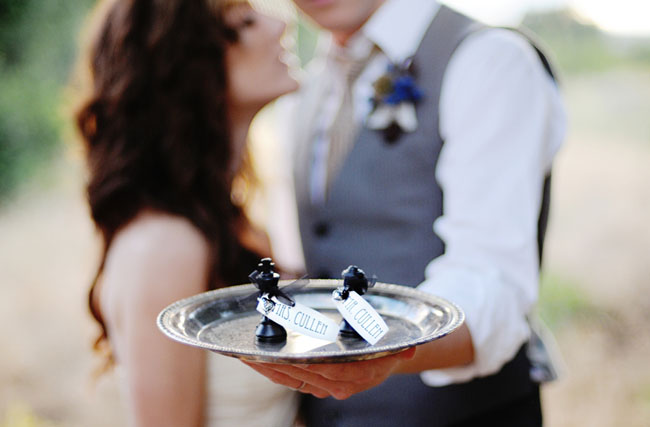 From Brienne, “We chose sunset and the time just after – quite literally twilight – to capture the moodiness and deep romantic elements of the “wedding.” Using glowing laced mason jars hanging from the trees and in our own version of the “clearing” we added our own twinkles and sparkles. The very last image of the shoot was the only image I had in my head from the very beginning of the planning of this shoot. I knew I wanted to re-create it, adding sparkles through the tea lights in the mason jars rather than Edward’s skin, and that the perfect time would be a very narrow window just after the sun had set and twilight had settled in. After placing my models, we set in to wait. It took a little while before I knew the moment was perfect, but as soon as I saw the image on the back of my camera, I knew we had it. The hills glowed their own blues and greens and greys, the shadows had stretched into their own blacks and the sparkles created an aura of light and romance that exactly captured my hope for the shoot.”

Such a fun idea for a shoot and not only is it fun to look at, but some great ideas for decor for your day. Thanks so much to the team for sharing their creative talents!