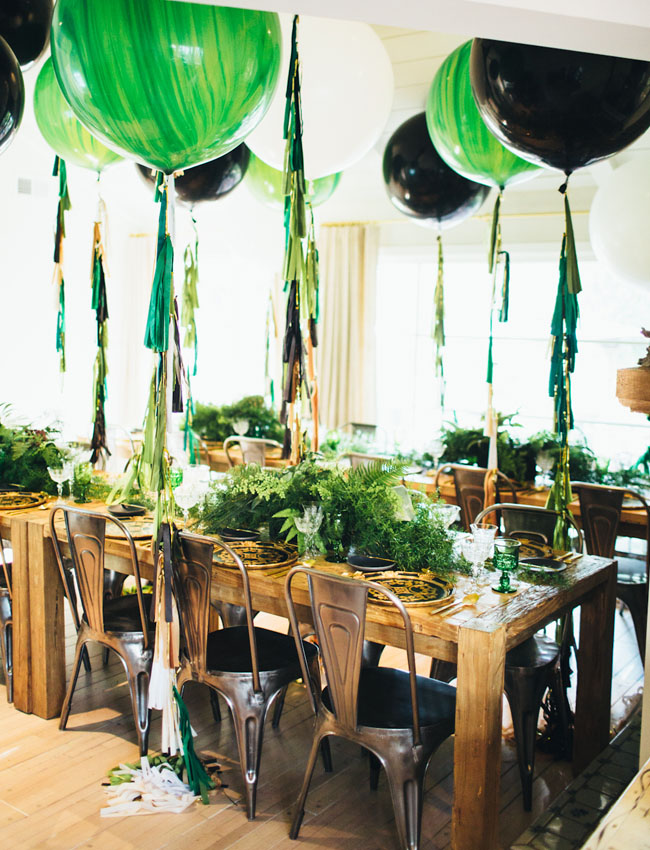 Every once in a while we think it’s fun to share events other than weddings to get a different kind of inspiration flowing. Because you just never know where you might spot that finishing-touch design element, fun color palette, or art piece that influences the whole composition of your day.

If you’ve been reading GWS for, like, more than a week, you’ve surely seen the stunning tableware pieces + styling from our good friends at Casa de Perrin. A few months ago, Diana of Casa threw her hubby, Josh, the most stylish 40th birthday bash, filled with so many great (and steal worthy) design ideas. Trust us, you’re sure to find lots of inspiration in the gorgeous images below by Paige Jones Photo for your wedding reception, rehearsal dinner or next dinner party and we’re so honored to get to share this event with you today! So be sure to read on because throughout the post, you’ll hear more from Diana about the design + event – and how she pulled off this amazing celebration without letting Josh in on the surprise! 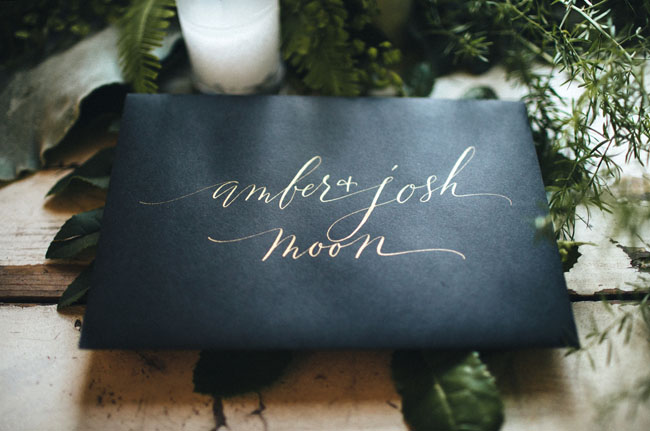 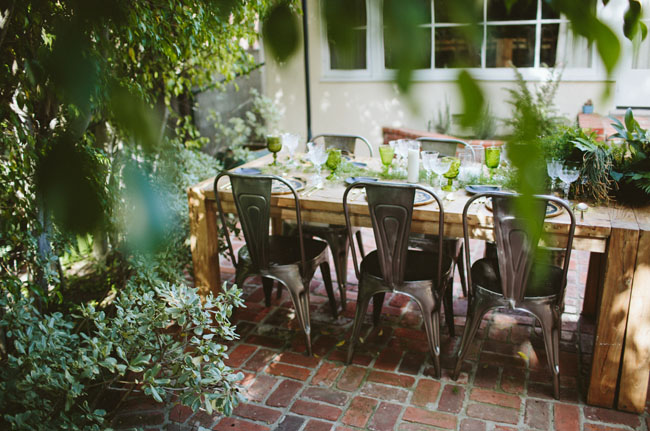 From Diana, Last September, Josh and I purchased our first house together in Brentwood, California. It was an undertaking, as there were lots of renovations and projects that needed to be done, so the two of us and our two dogs moved into essentially a construction zone (and in the midst of wedding season, oh my!) But we were so excited! We’d originally planned to have everything completely finished by Thanksgiving, as Thanksgiving is a really big holiday for us that we’ve hosted ever since we’ve been married. We invited family and friends far and wide, but much to our dismay, as the months and then weeks crept up on us the house was no where near complete. That, coupled with a loss in our family a week or so before the holiday, caused us to end up canceling the whole thing. It was a very sad time, to say the least. So a few months later, when Josh’s 40th birthday was coming up around the corner, I took the opportunity to essentially “reschedule” the Thanksgiving we were so looking forward to, and decided I would throw Josh a surprise 40th birthday party in our new home! 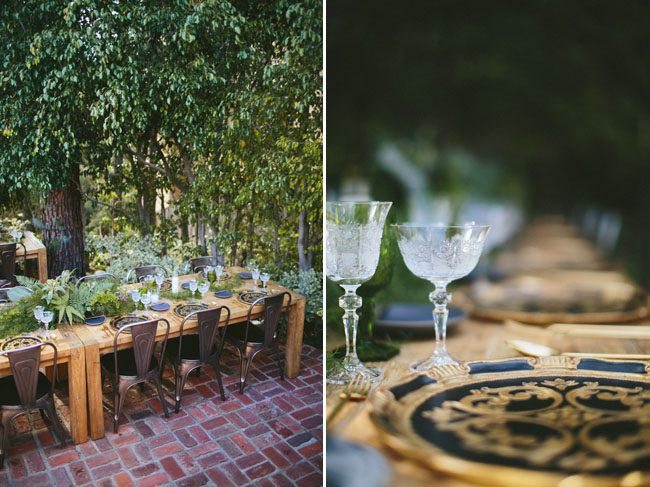 We have worked with Kristen of Moon Canyon Design on so many events in the past, and our styles and aesthetics aligned perfectly for Josh’s party. We were inspired by a variety of foraged greenery, long and natural arrangements to make the tables feel full, and the idea of incorporating as many elements that made it feel fitting in our forrest-like backyard as possible. Kristen even styled various ferns and leaves underneath plates and flatware, giving the tables that added overgrown and wild feeling. 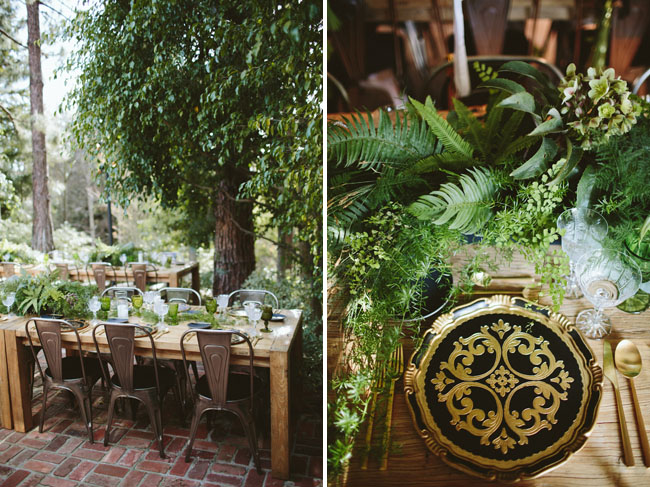 It’s no surprise that I’m inspired by table settings, so I wanted to shoot a #cdpdesignpresentation (see it here + many more design presentations on CdP’s instagram!) that would be the basis for the inspiration/color story of the day. I’m, however, not the resident photographer at CdP, so I had to trick Josh into shooting his own design under the guise that it was for a client of ours. We set the pieces down on paper, Josh commented on how it felt masculine, and I secretly knew he’d at least be into the table settings at his party. 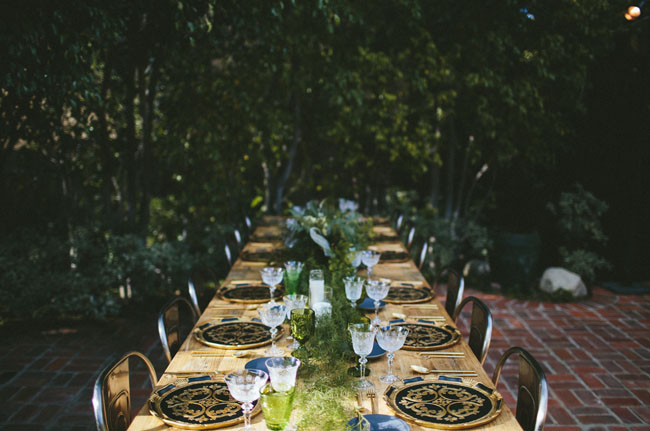 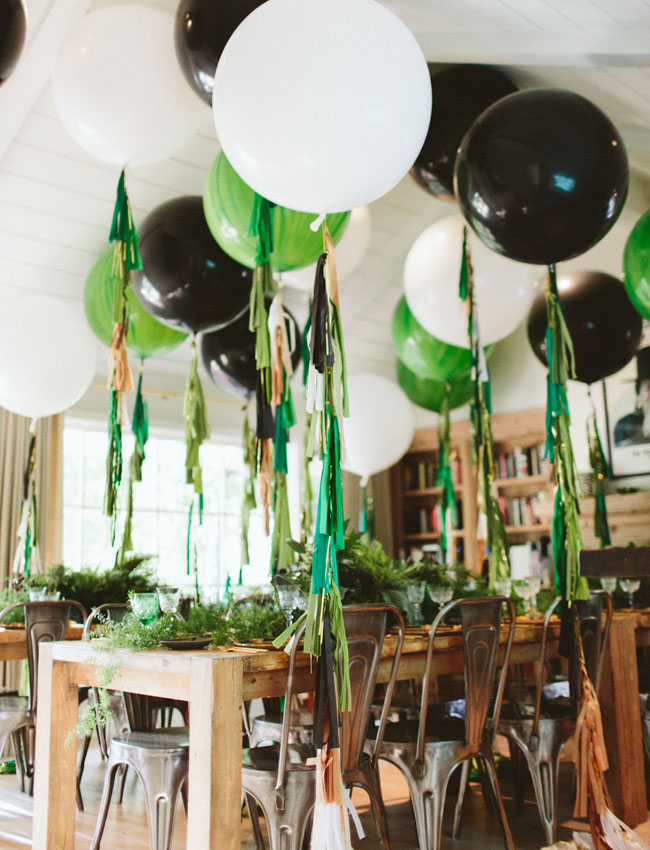 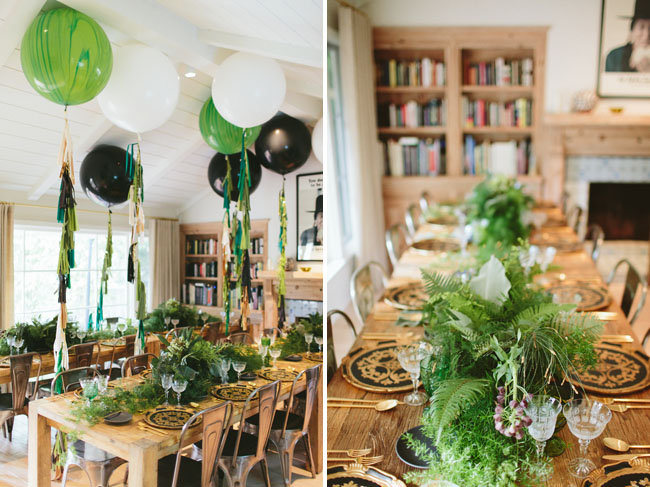 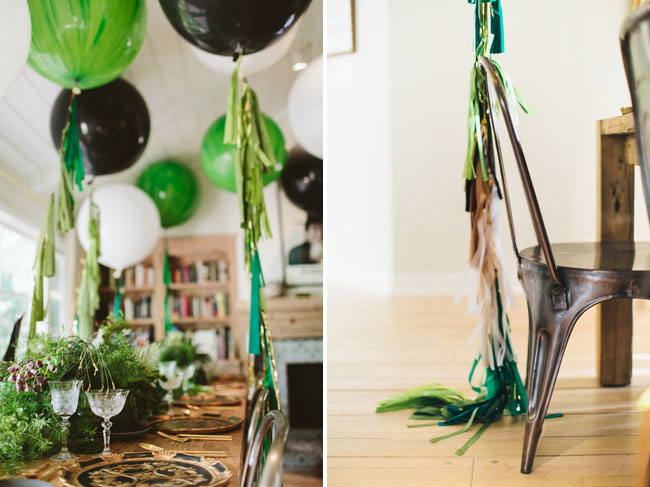 You are never too old for birthday balloons. Especially when they’re as fun as Geronimo Balloons! When gathering inspiration, we had come across a photo of green malachite plexiglass (which we ended up making custom coasters out of!) so I was overjoyed to find a similarly inspired green malachite balloon on the Geronimo website! 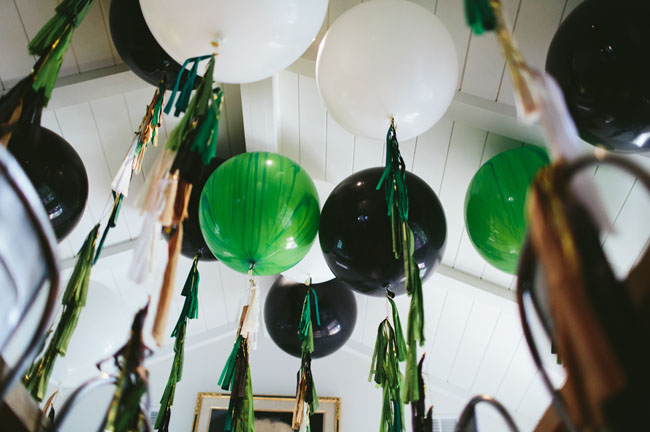 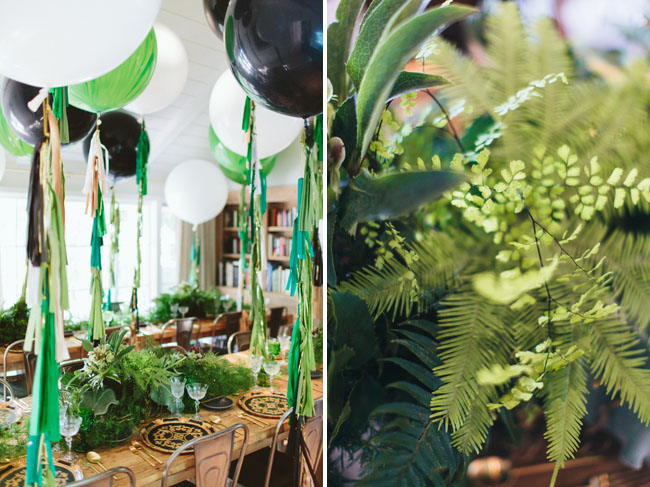 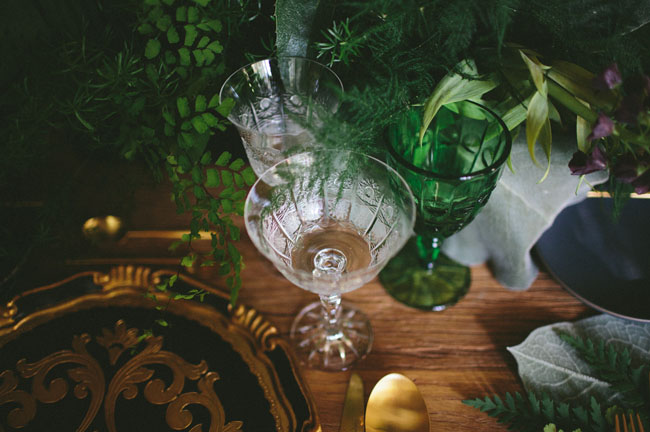 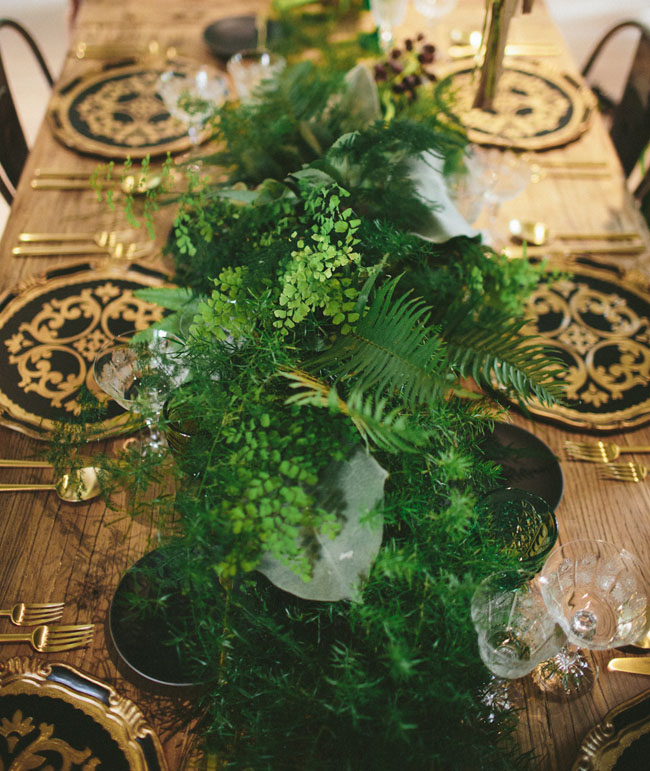 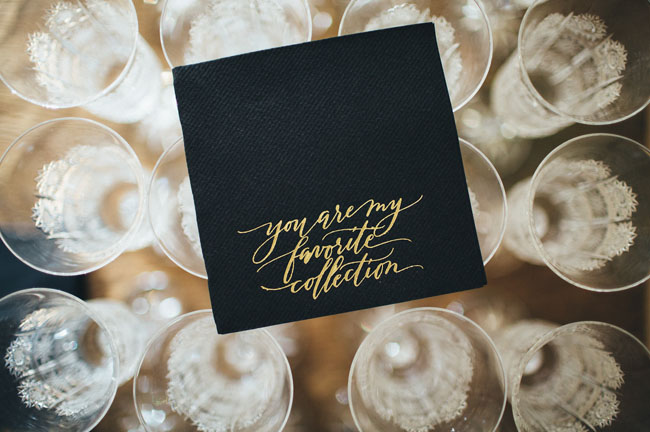 We have known Amber Moon of Amber Moon Designs / Pitbulls & Posies since the very beginning of CdP. We did our first styled shoot together, we shared studio space at the old warehouse, and over the past few years have built a friendship we’re so grateful for. It was a no-brainer that Amber Moon would design the the paper and collateral pieces for Josh’s party. 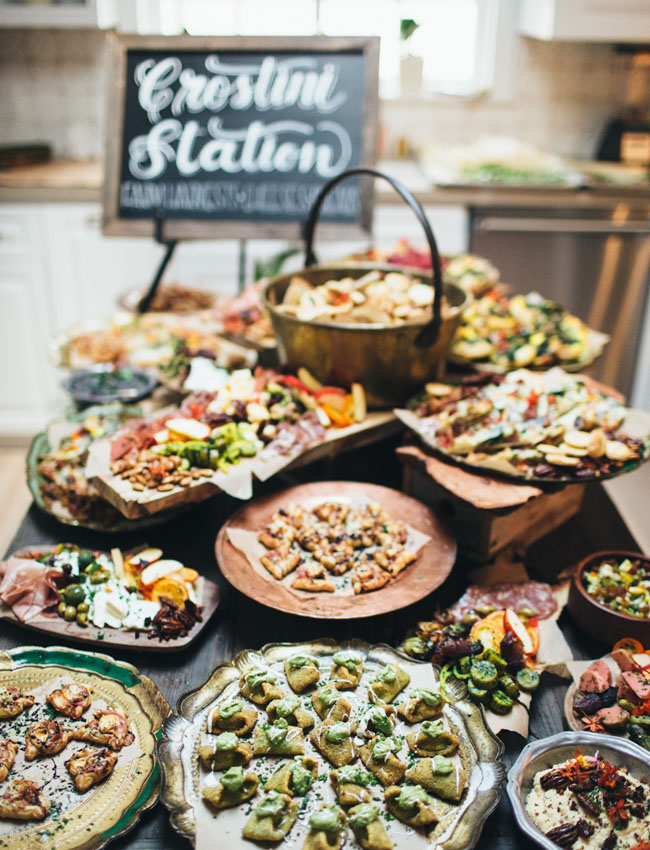 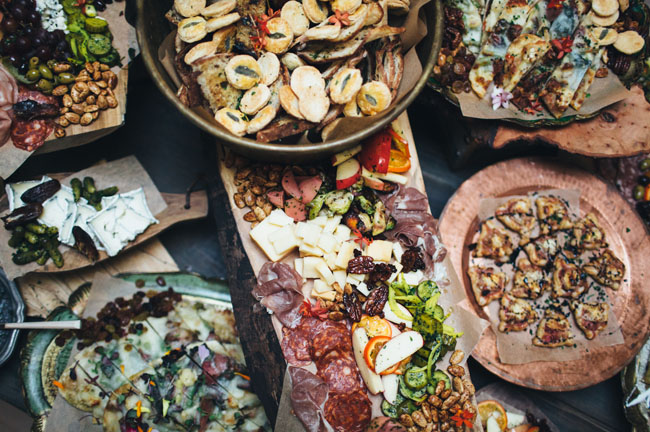 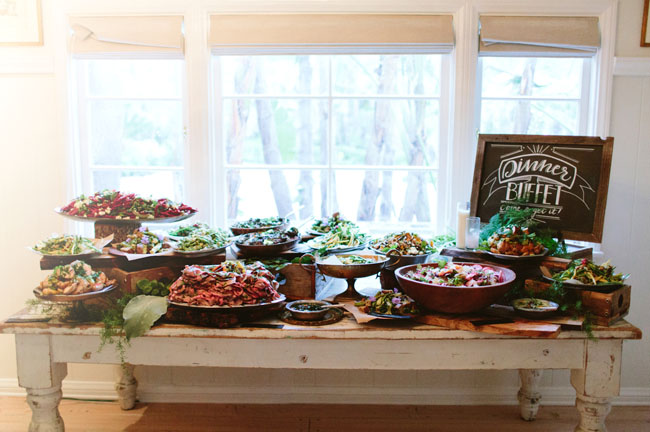 Heirloom LA catered our own engagement party, rehearsal dinner and wedding (which was featured here on GWS!), as well as various holidays and occasions we’ve hosted since then. Matt and Tara are not only amazing chefs and business owners, but incredibly sincere humans who we are lucky to call friends. The food they provided for Josh’s party was made with so much love and care, and could truly be tasted in everything from the stationary appetizers and crostini bar to the dinner and sweets buffet. 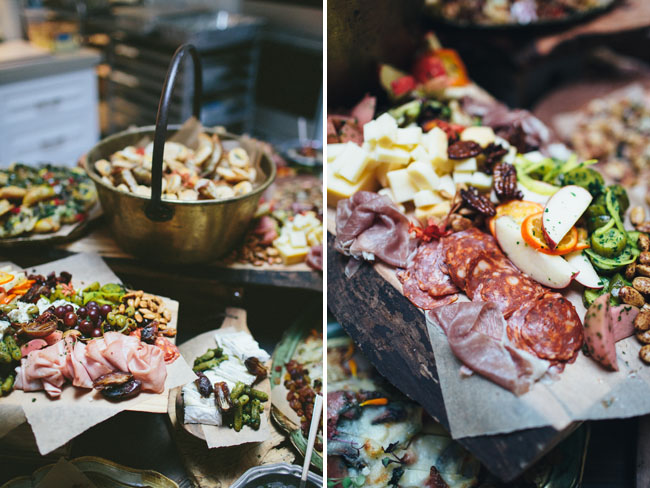 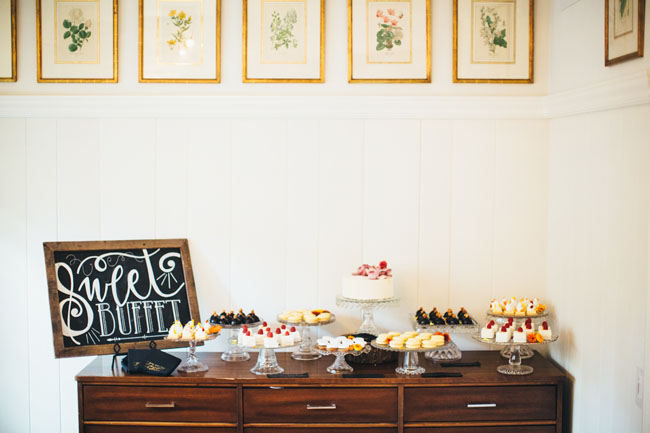 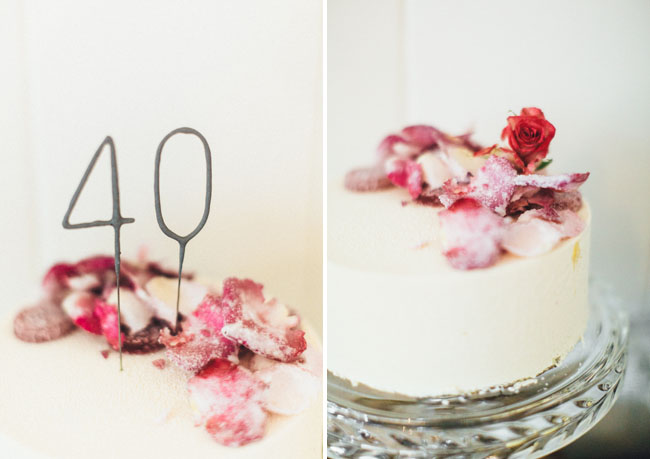 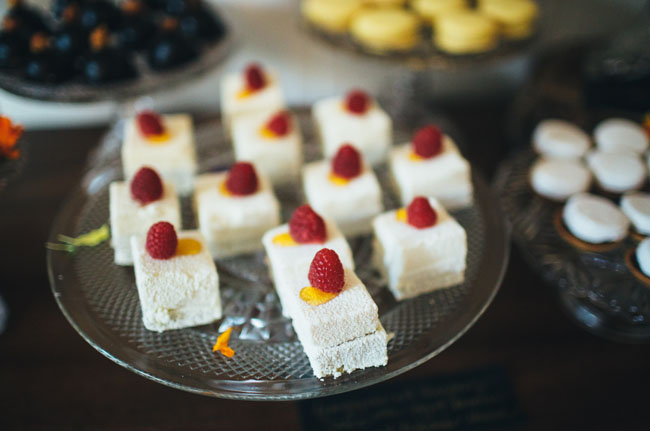 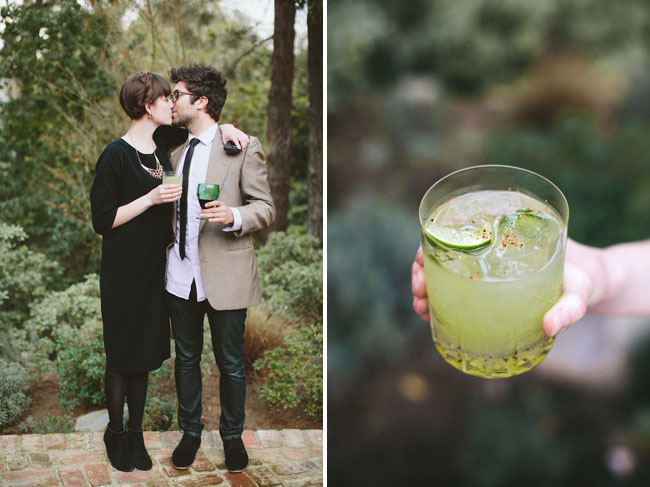 Wasn’t that so much fun?! We hope this party leaves you feeling inspired by some great design ideas!

Happy (belated) Birthday, Josh! And thanks so much to Diana + the team for sharing!