I’m so excited to share these beautiful wedding photos by the lovely and talented Leigh Miller! I love the location – a fun red barn, the red anemones, and the bride’s shoes are stunning – wait until you hear the amazing story behind them! This wedding was at the picturesque Strawberry Farms in Irvine, CA. If you are looking for a red barn in socal – this is your spot! Manuela and Eric are just the cutest couple! A short (ok, it’s a bit long, but fun read!) story about Manuela’s fun shoe adventure as told by Manuela…

This is the incredible true story about how i became the proud owner of the most fabulous pair of shoes. my wedding shoes (which i will totally re-wear but store in a glass box so i can always look at them when not wearing them)

last year i bought the fall ‘o8 instyle weddings magazine. in it i saw and immediately fell in love with a beautiful pair of stuart weitzman gold shoes with a bow detailed of swarovski crystals. these shoes were beautiful. at first i just lusted over them by peeking at their picture every now and then. then i started getting curious as to where i could find them. the magazine gave the number to the beverly hills stuart store so finally i called them…just to see if they had them in case i would ever want to tempt myself even more and go try them on.

however, by the time i called the store it was already winter time and the magazine was now ‘old’. the shoes were no longer “in season.” the salesman said they don’t have them and haven’t had them for a while (even though they just appeared in a magazine a couple of months ago). this set back, which would normally have meant a dead-end, only made these shoes more of a challenge, making me even more curious and determined to find them. just to try them on, of course.

i started looking on line. googling anything remotely related to the description of the shoes. never have my search terms been so creative. what i found most odd was that i couldn’t find ANY trace of these shoes anywhere. it’s as if they didn’t exist at all. the more time passed though, the more frustrated i got. when i gave up, my amazing and loving fiance became determined to find them for me. so we called around and after many many many dead ends not only online but with numerous stores with everyone telling us that they’ll “look into it and get back to us”, we called the stuart store in san diego. the girl that i spoke with seemed just as helpful as all the other people and said exactly the same shpeal of “looking into it” for us.

a few days later she called saying that the shoe is discontinued and has been for 2 years so there’s really no way to get it anymore.

her second call said that she’s waiting to see if stuart (yes, as in mr. stuart weitzman) will approve the sale of the last shoe of it’s kind left – the actual shoe used for the picture in the magazine – which so happened to be a size 6 (my size)!! we had to wait about a week for stuart to come back to the states for the oscars (i know, right???) in order for him to give his answer. finally he came and, bless him, sold me the shoe!!!!

when i finally opened the box i realized how much more beautiful they are in person than in the initial magazine photo.

Don’t you just love that story? Determination pays off :) Oh, and who says grooms don’t care about the wedding? Eric picked out the lovely color combo for the wedding – red and lavender – nice job! :) Congrats to both of you and thanks so much for sharing some stories and your photos with us. 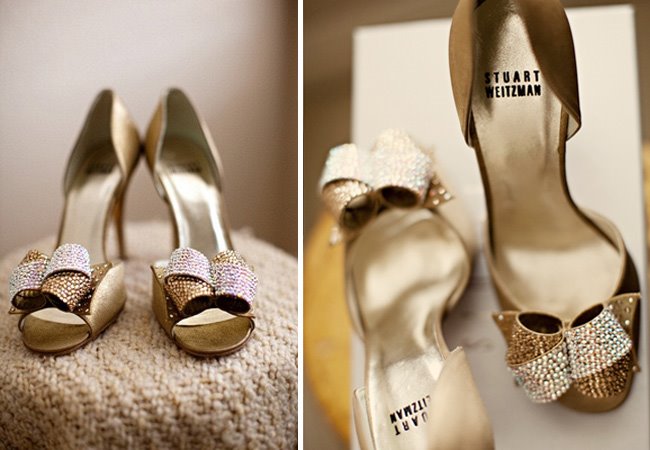 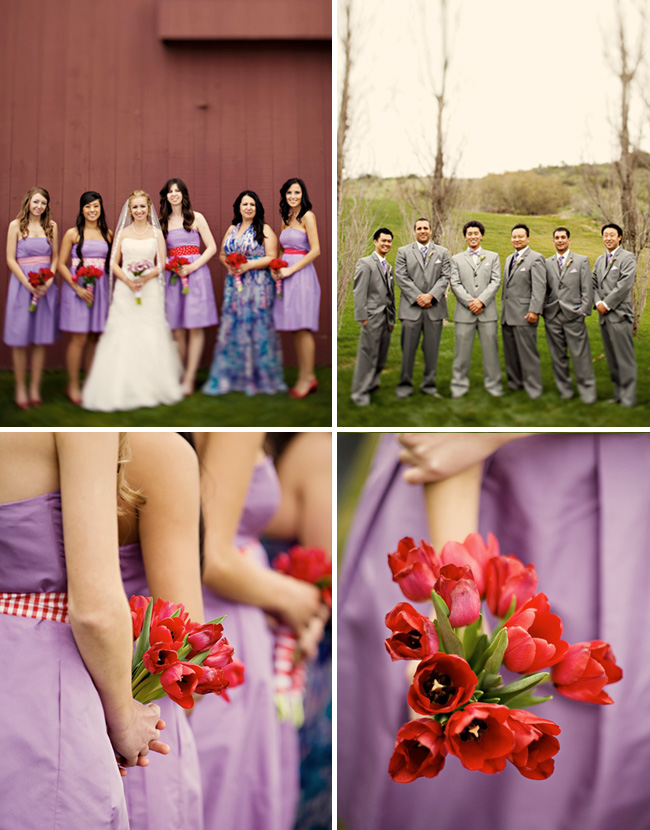 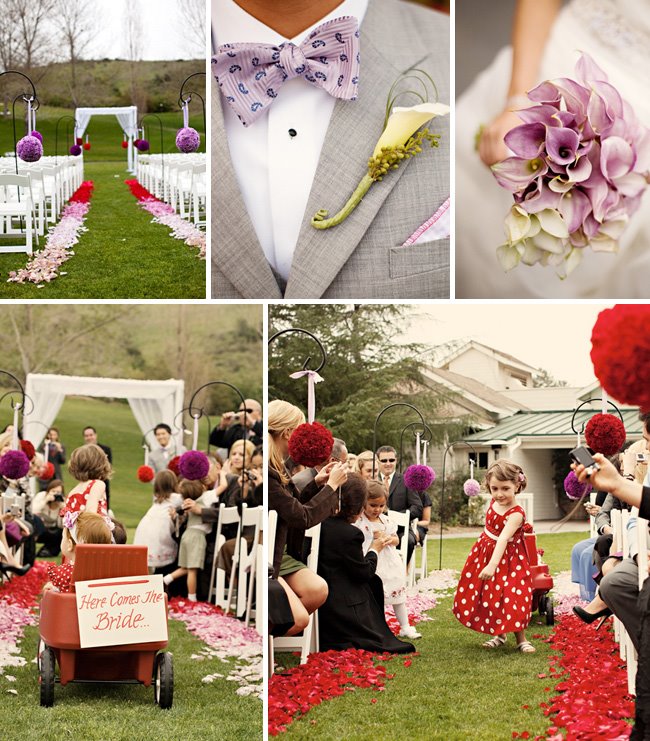 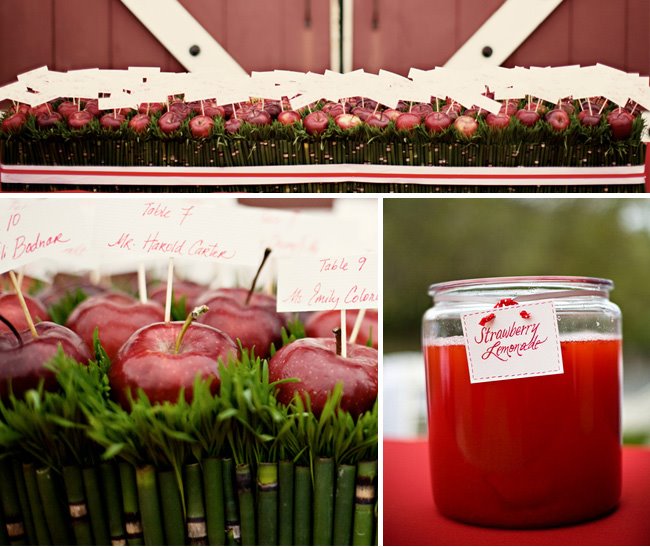 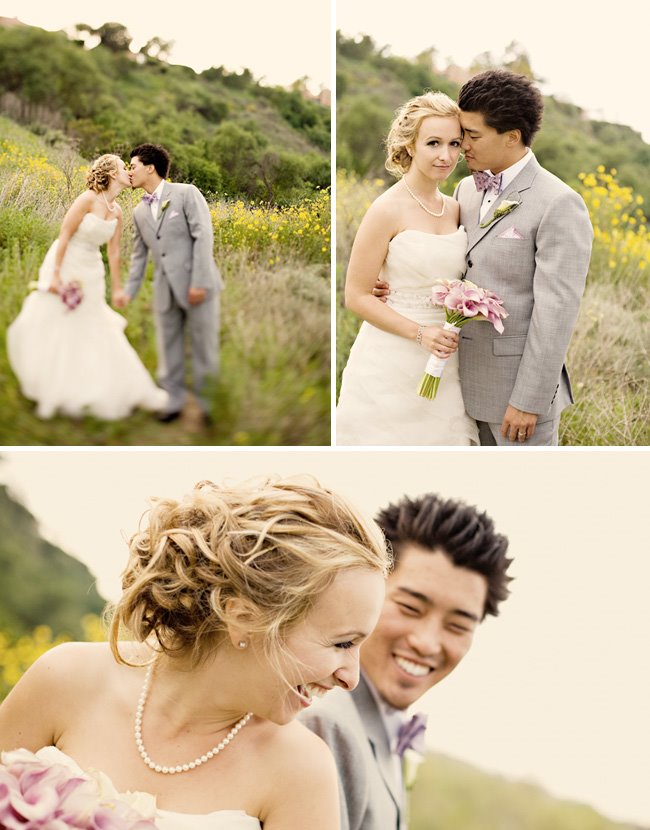 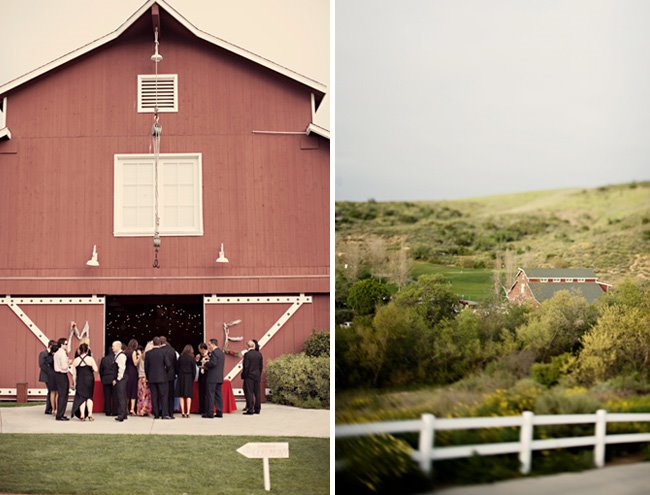 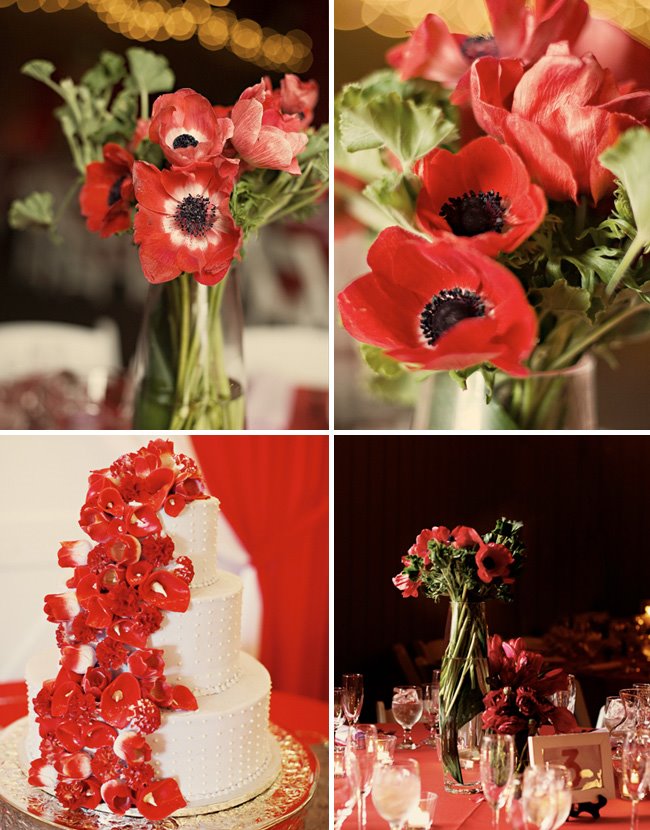 more details
bride’s dress: Marissa – purchased from Erin Cole. The veil i wore for the ceremony is the same one that my sister wore and purchased from Erin Cole 2 years ago.
bridesmaid dresses: J Crew. The sashes were made by me and my mom
groom’s bow tie: Barbara Blank, New York (from Bloomingdales)
florals: Claudia Johnston, friend and florist
catering: Strawberry Farms Golf Course
music: Esquires Big Band
event coordinator: Strawberry Farms Event Coordinator, Heather Howery helped me put all my ideas together in a way that made sense and ended up looking wonderful. She took care of putting up all the arrangements on the day of and helped get me organized throughout the planning process.

There are lots more photos on Leigh’s Blog, and check out their super cute engagement session also. Thanks so much Leigh!