Today I’m excited to share the wedding of our Dream Love Shoot winners – Caitlin + Simon! You might remember that Simon is the Captain of a ship in Bermuda and Caitlin runs logistics there. They run a program where they teach children how to sail. :) They met on the ship and now spend most of the year at sea or in Bermuda were they live. They decided to get married in Boston were Caitlin’s family is from and then had a second wedding reception in Sydney. for Simon’s family + friends who are still in Sydney. They loved Caroline Tran and her work so much (who wouldn’t!?) that they decided to hire Caroline to photograph their wedding after working with her for their engagement shoot. :) Their wedding is just so perfect + pretty and I’m excited to share it with you guys today! Thanks to Caitlin + Simon for sharing some details into the day also. Love you guys! 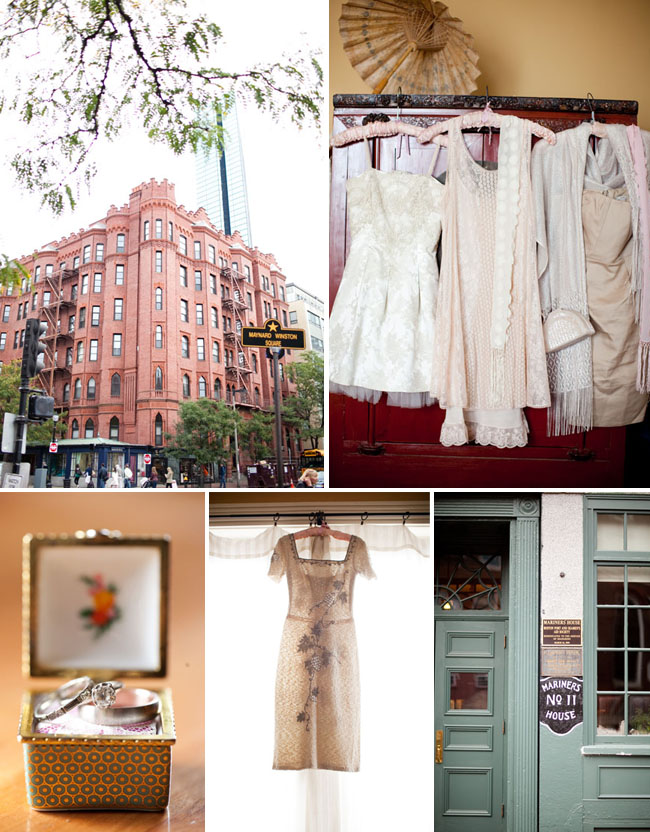 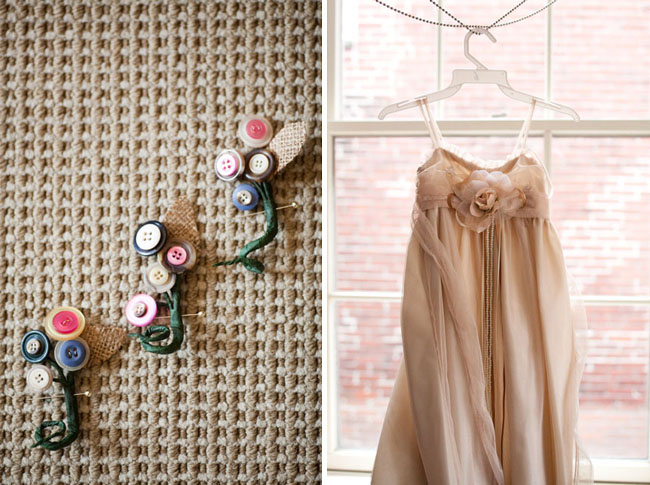 When we finally decided on The Boston Public Library at Copley, it was feeling really late in the game and we just needed SOMEWHERE to get married. Our first five potential venues turned us down—“NO WEDDINGS”. Each “No” was pretty heartbreaking, because it meant starting from square one and letting go of all of the planning/decorating/etc. that I had prematurely launched into. Don’t get me wrong, BPL is absolutely gorgeous — it was just a bit grander than what I had initially been after. Initial venue guidelines: somewhere near the water, kinda funky, less traditional, and a place we felt connected with. It was the connection bit that brought us to the library.

The inspiration of the day became making BPL feel like what I had initially wanted in a venue and we had a lot of fun making our ceremony in the library’s courtyard feel more like a backyard wedding. We kept it simple — not wanting to detract from the space. When it came time for the reception the feel was more bistro than backyard, but still very low-key and relaxed. 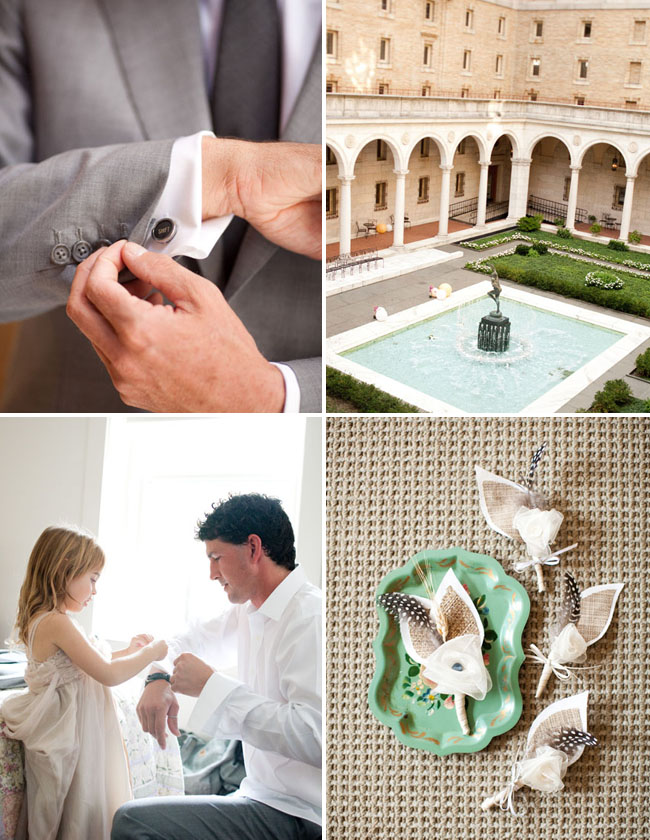 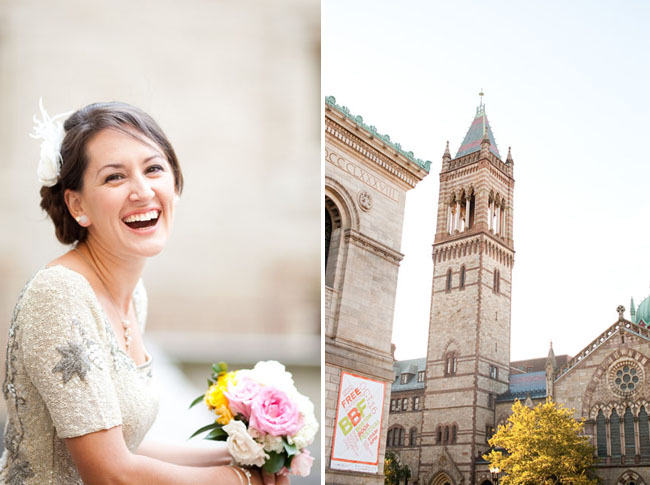 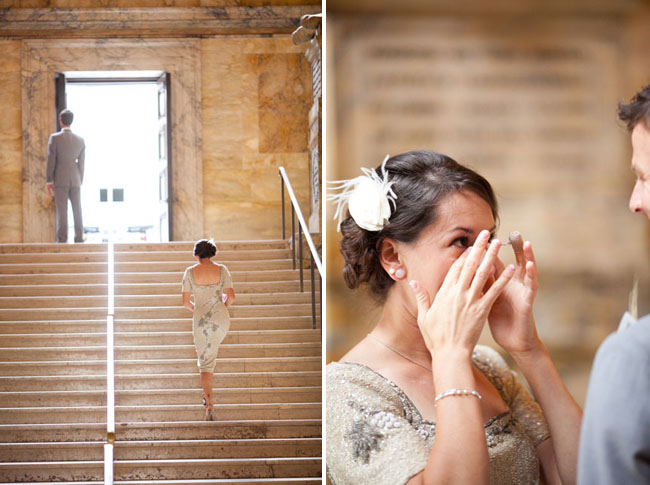 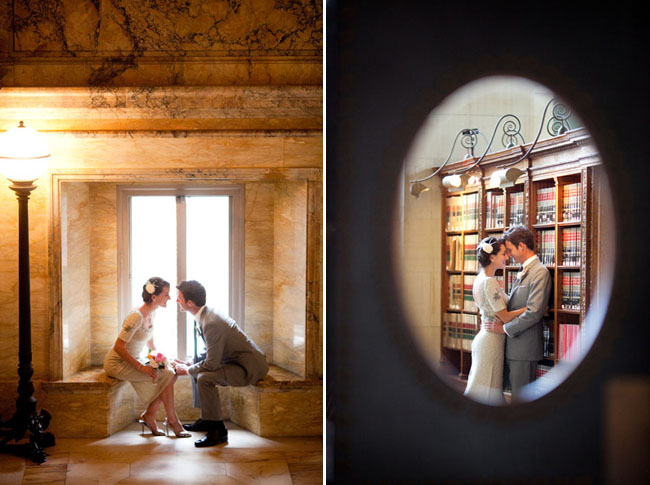 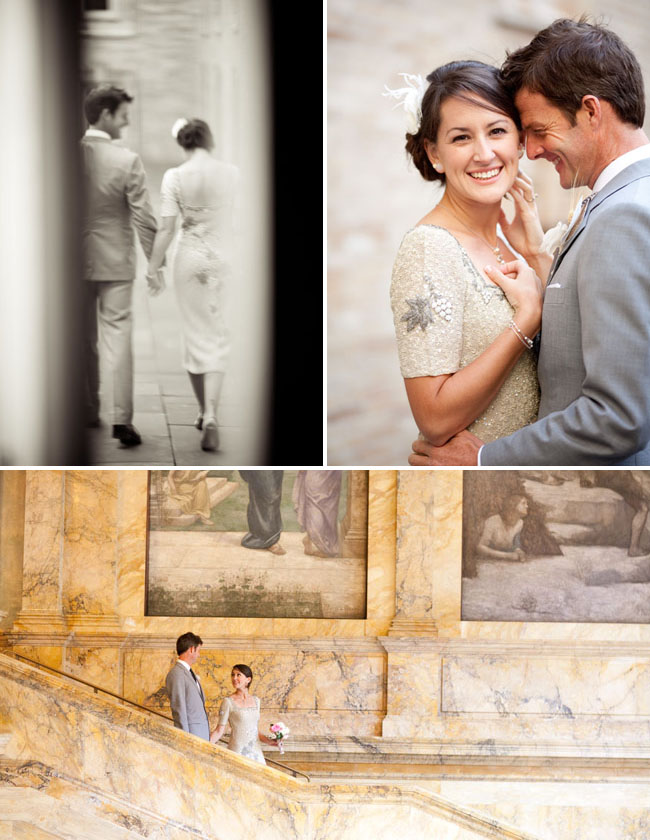 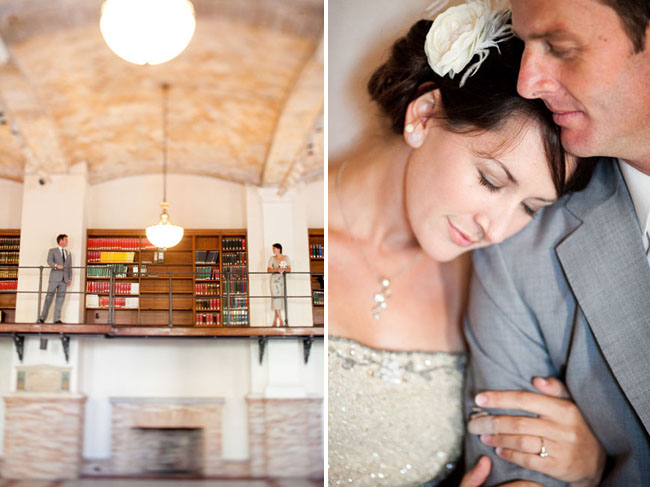 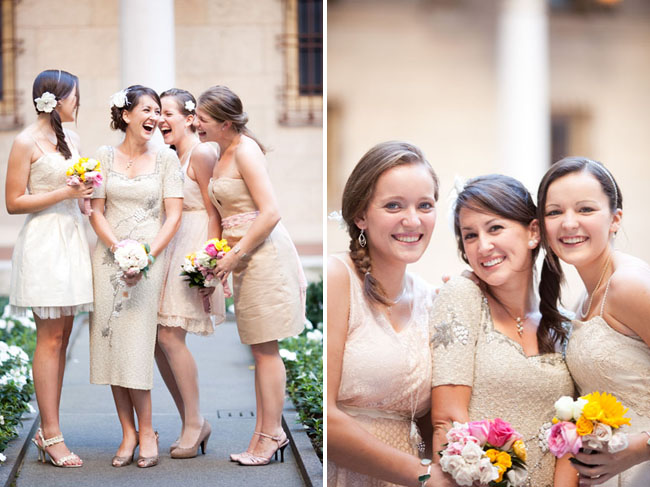 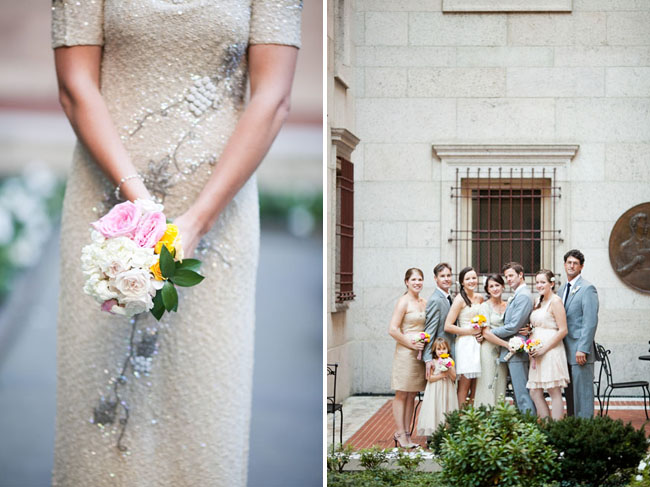 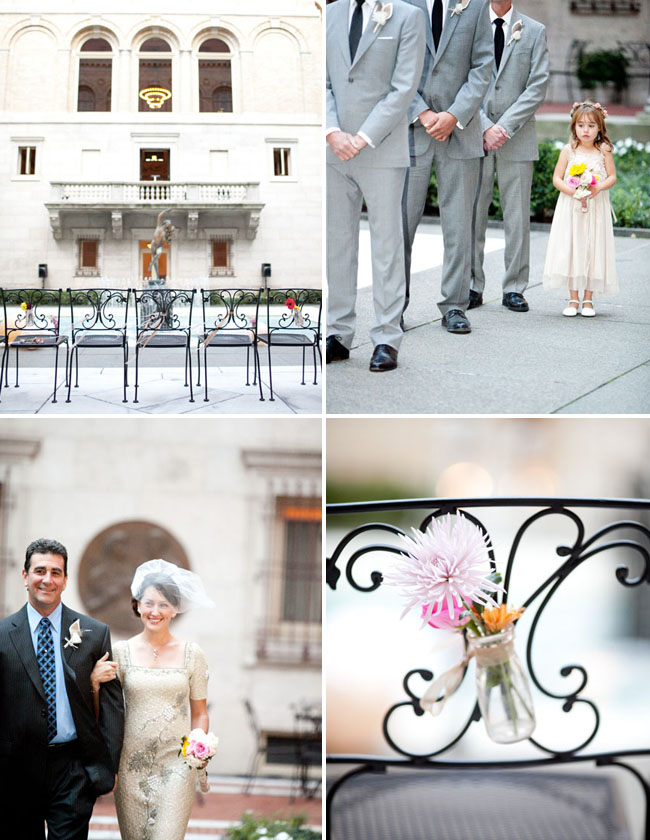 Most memorable moment of your wedding day? I walked to the Boston String Quartets arrangement of Ben Harper and Jack Johnson’s cover of Bob Marley’s “High Tide or Low Tide”— it was the most beautiful thing I’ve ever heard. Another moment that was pure bliss was immediately after the ceremony — a HUGE weight lifted, my nerves eased, and all of the crazy, emotional, ridiculousness just dissipated and I looked at Simon and started nodding. 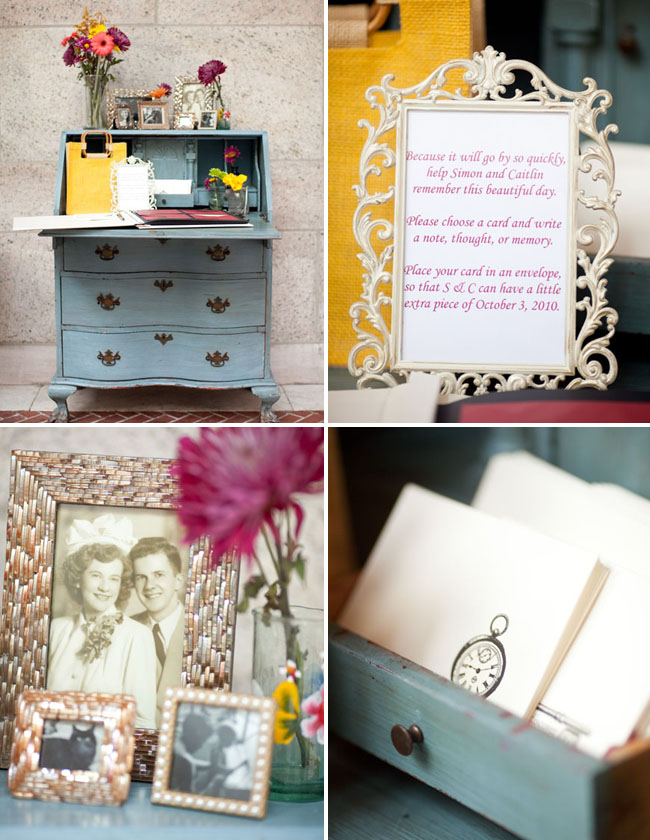 Early in the planning, it was definitely a Caitlin show, but creating something that both Simon and I would feel good about became the primary goal — or “theme”. We wrote down adjectives that describe us. Me: edgy, scrappy, thrifty. Simon: stable, clean, crisp.

Some cool stuff came out of it — like mixing burlap with onyx and orchids and stitching string lights to large patio umbrellas. We didn’t want to be too tied to anything in particular, so we didn’t have “colors”, but the choices we made were very intentional. On the day, there were some recurring themes that just sort of manifested themselves.

When it came to attire, a timeless look was really important to me—I tried to stay away from fads. Simple, classic, pretty. I didn’t want it to seem like we were all in costume. I ended up making inspiration boards, which helped a lot. I made one for ceremony and bridal party attire and one for reception.

Love this bit from Simon, “Two weeks before our wedding we were dealing with a hurricane at sea. Our wedding was much more intense, and more exhilarating. There was a bite to the breeze as the evening descended and my beautiful bride entered in that stunning dress. I will never forget the feeling of the strings resonating through the courtyard as the fountain silenced. We smiled and suppressed shivers throughout the ceremony, then we read each other the vows we had written and suddenly we were married. I think we kissed before we were pronounced. Then it was just a warm sea of congratulations ebbing into a cocktail party of cool people and incredible food. Friends of ours becoming friends of each other. Stealing a secret first dance with Caitlin after the speeches, before anyone noticed, trying to remember salsa and just loving each other. DJ on the juliet balcony above, market umbrellas and little paper lanterns a surrounding blur. It was perfect. All of it.”

Any advice for those planning now?

I think my advice would be to take an hour a couple days before the wedding to remember what it’s all about. It’s so easy to get caught up in the details, which is [unfortunately] exactly what I did. The fact
that we were actually getting married didn’t hit me until about 8 minutes before go time — at which time I burst into tears and started hyperventilating until Simon came into the bridal suite and helped slow my breathing. It was very stressful and emotionally draining and I think a little breathing time prior would have been smart. Also, if it can be avoided, I wouldn’t plan from afar. So much was left until the last minute and it added additional stress.

I would recommend a second wedding — our Sydney event was really chill and a blast. Because we had already done it once, the rollercoaster ride of emotions wasn’t there. It was still emotional and beautiful, but a lot less painful. Oh, and if you prefer a less structured event, I’d recommend providing guests with that information. We had a cocktail reception and I felt like many of our guests were looking around wondering what was next. Woops!!

Everything I know about weddings, I learned from Green Wedding Shoes. Seriously. Thanks Jen!!