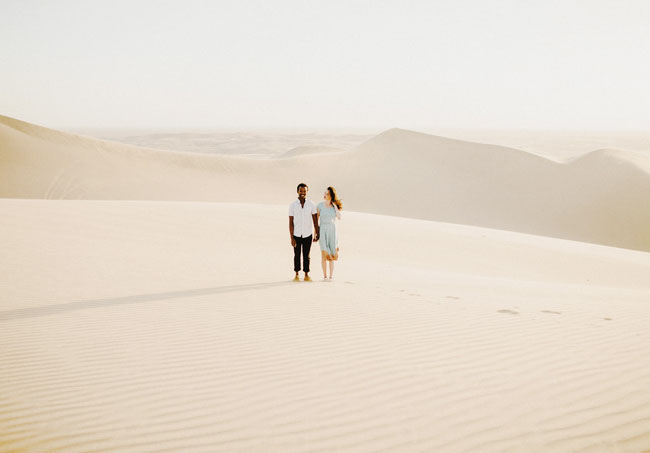 Alexandra + Odwa have a pretty amazing love story. Odwa is from Africa and Alexandra met him there on a missionary trip. It truly shows that you never know when or where you will meet your true love! I just love their story and they are sharing a he said/she said version of it at the end of the post, so if you love a great love story, please read it. :) Big thanks to Tyler Branch Photo for the seriously gorgeous photos! It truly looks like the desert of Africa where they met, but it’s actually here in Cali! 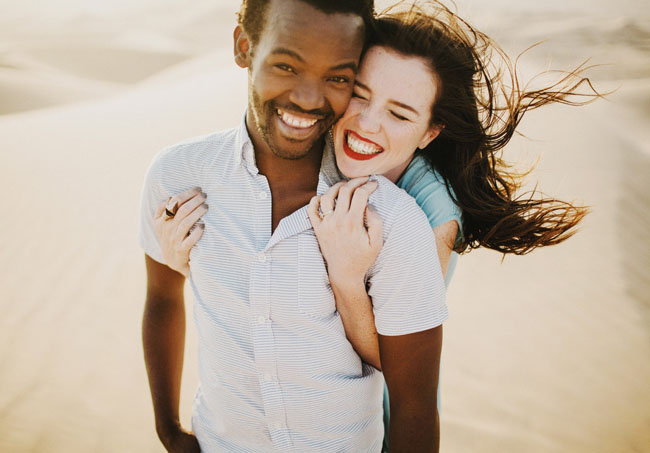 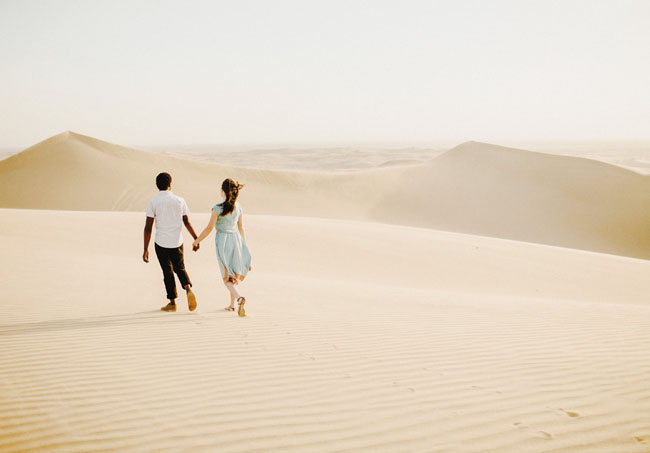 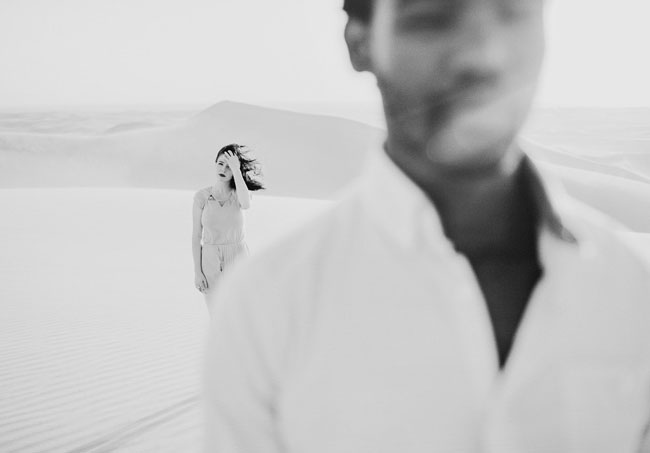 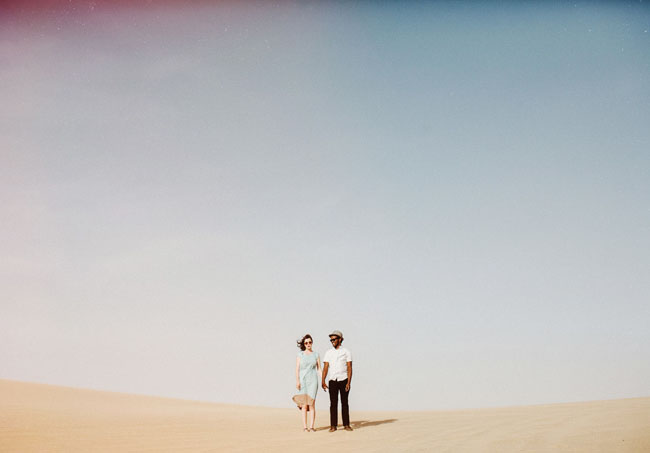 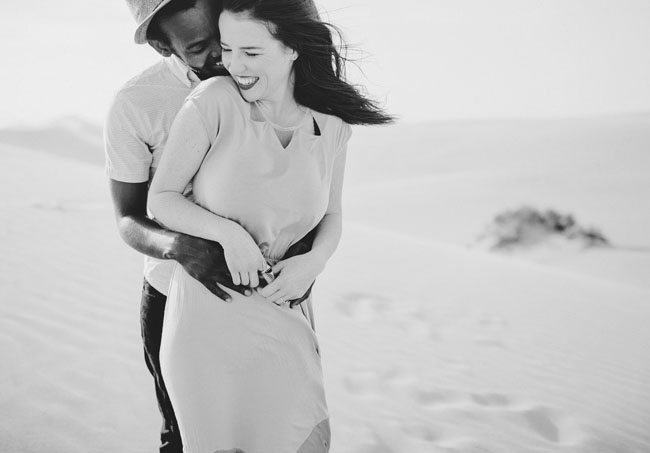 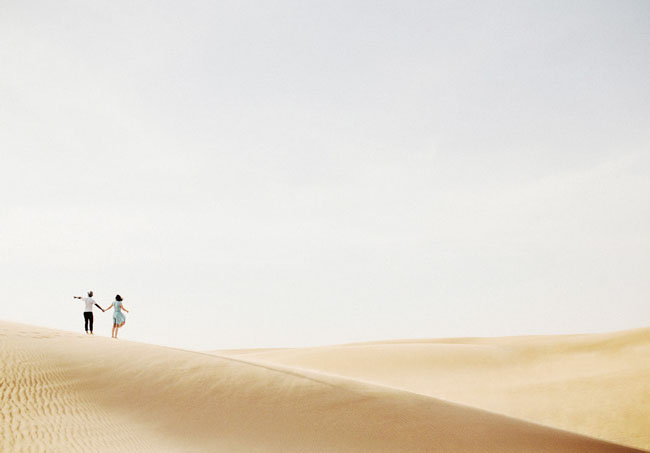 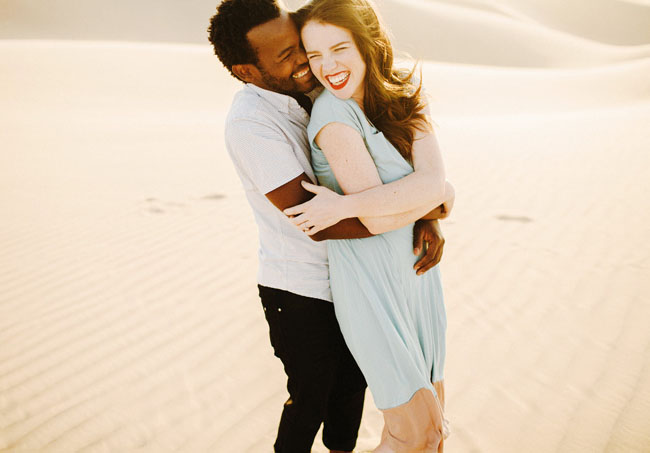 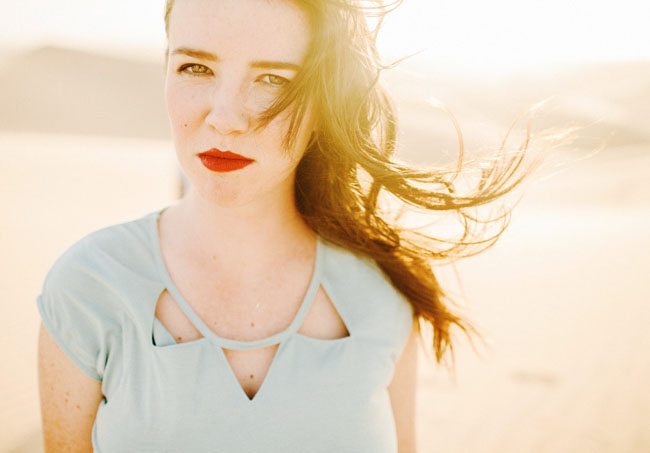 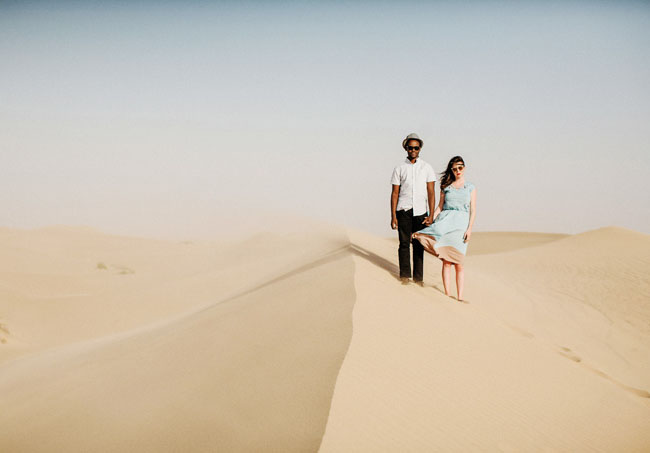 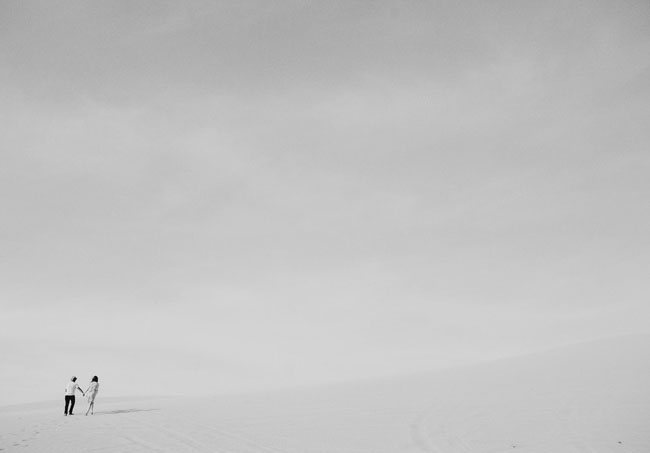 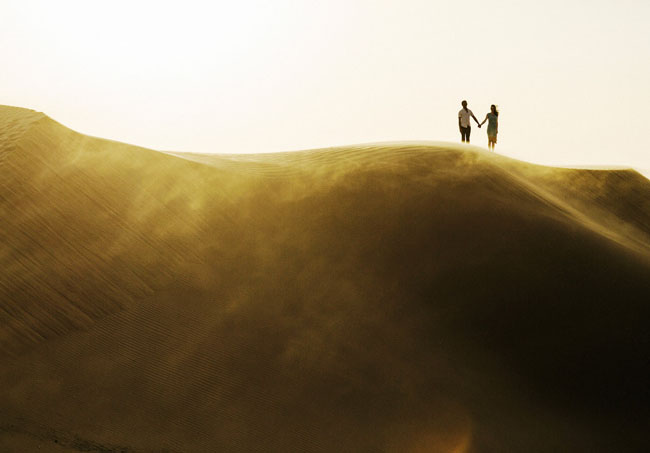 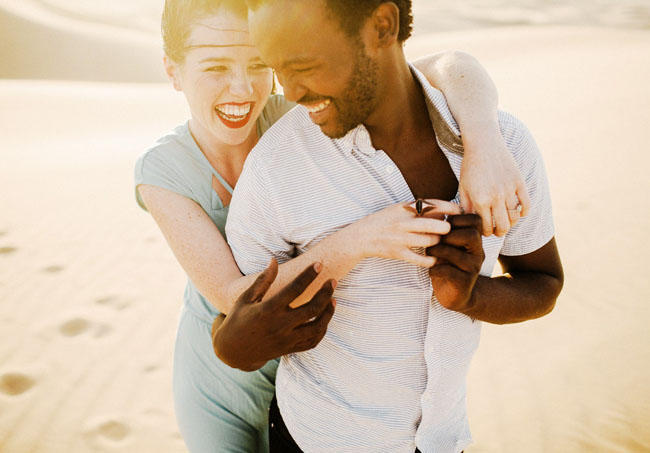 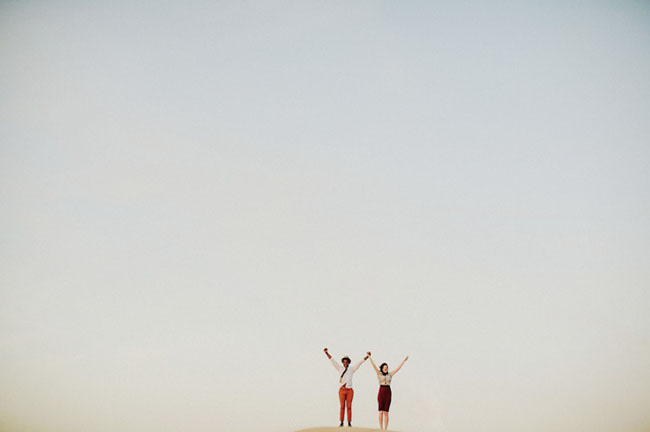 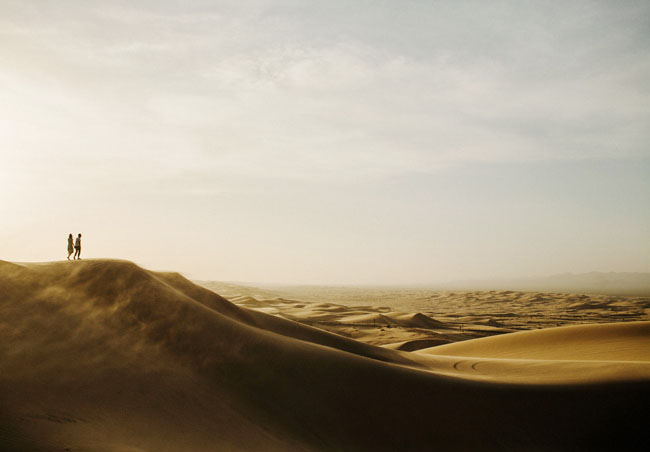 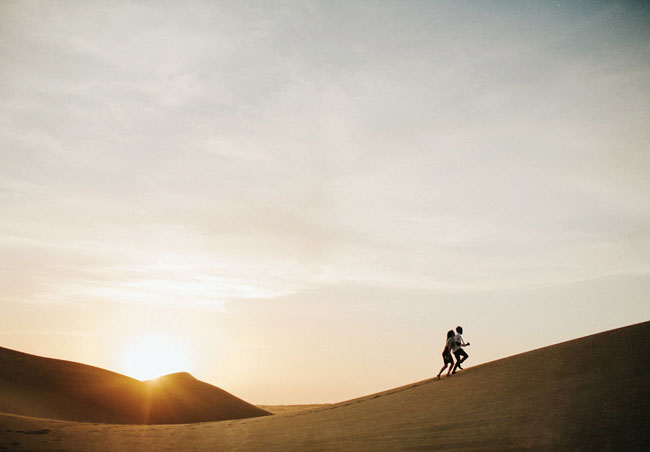 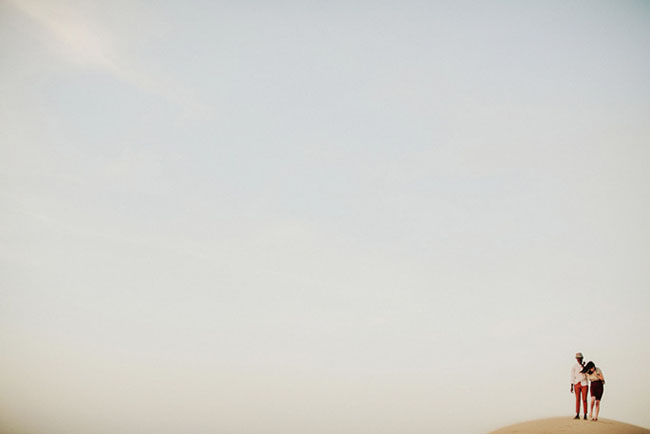 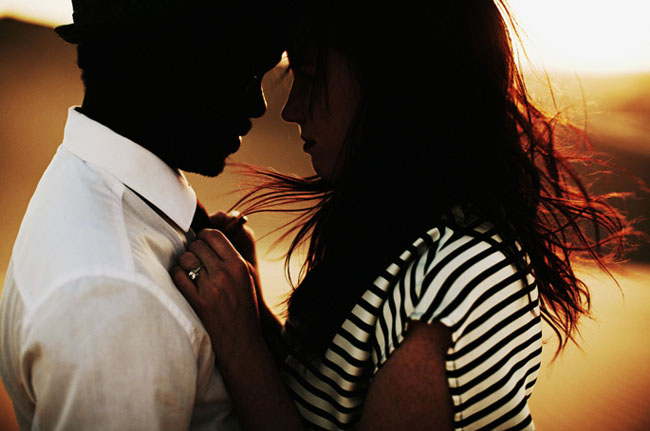 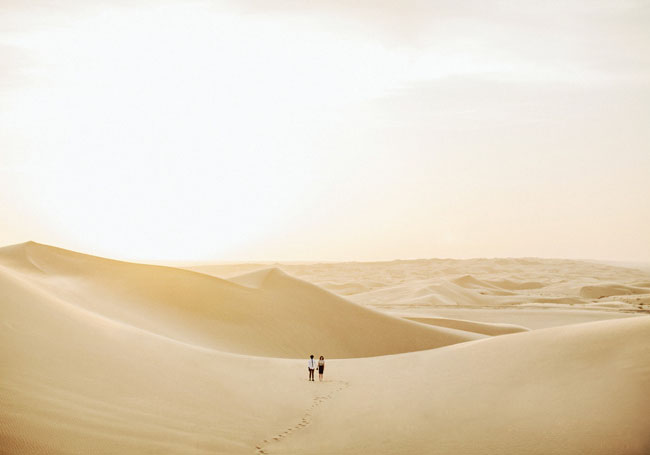 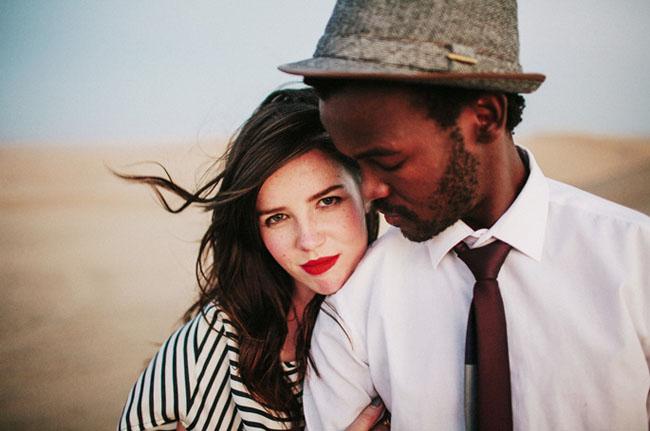 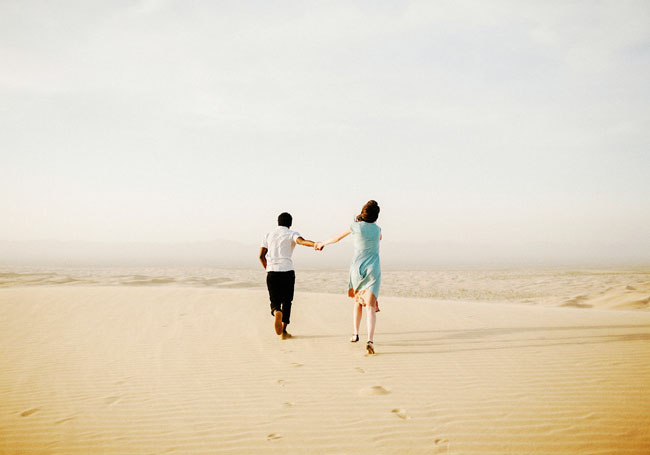 Alexandra: I’m originally from Long Beach, California. I went to cosmetology school out of high school and became a hairstyle in Naples, California. In 2009 one of my clients came in one day telling me about the work she does with teenage girls living in a township in Kayamandi, South Africa. My roommates and I joined her for coffee to discuss the possibility of us sponsoring one of the girls and by the end of the conversation we were not only going to sponsor a girl, but we were on the list of 20+ people to go to South Africa that July for two weeks.

Odwa: 2009 was the year of preparation of the World Cup in South Africa. We were all excited for the guests we would have in Kayamandi. It meant a lot for everyone who lived there. I was teaching art at an organization, called Kuyasa, in the township and my students and I were very excited about this opportunity we had. We became very busy with designing bracelets and vuvuzelas with beads and anything that will attract tourists to our art program. That year I probably spent 50% of my time in the art room researching about the World Cup. My boss asked me to paint the walls of the organization to draw the youth in. That got me excited because that meant a lot of people would be able to see my work.

Alexandra: My two best friends and I landed in Cape Town with the rest of the team in July 2010, excited for the weeks ahead. The World Cup had just ended so there was still excitement in the air for South Africa. That first week we spent time with the girls in the group home in Kayamandi, met the girl we’d been sponsoring, and headed to Kuyasa to help out with whatever was needed.

Odwa: The whole world had come to South Africa for the World Cup and we had to entertain them. Germany, Netherlands, Australia, ALL in South Africa. So, at this point, only two weeks after they’d gone, I was exhausted. I’d had enough of tourists and just wanted to be alone. But, to my demise, 20+ Americans had just landed in Cape Town and were on their way to us. The week they arrived at Kuyasa it was like a whirl-wind…crazy and loud. At this point we’d seen so many groups of tourists they all began to blur together. Feeling anti-social I went down to get my lunch. I was tired, it was loud, there were kids everywhere. Then there were these three girls making the most noise, playing with kids. I noticed them because they seemed comfortable, like this was there home. I greeted, they greeted back. That’s when I first met Alex, with her bright red hair. But it wasn’t love at first sight.

Alexandra: I don’t remember that. All I know is that I was having the time of my life and in those two weeks I decided I’d move there the following year. So I did. I quit my job, gave my stuff away and in July 2011 I moved to Kayamandi.

Odwa: Everyone knew she was coming. Everyone was talking about her. She was famous before she even arrived. I decided to what I usually do: the opposite of what everyone else was doing. I stayed as far away from her as possible.

Alexandra: The guy in the art room seemed interesting. I love art, I love music, so I would always pop in to see Odwa and ask him to fill me in on his latest projects.

Odwa: One night I needed a guy to talk to but I didn’t trust very easily because of my previous experiences with the guys in the community. So after I debated in my head about who I could talk to, I decided to talk to Sylvester, who had similar past experiences to me. The coincidence was that he was Alex’s roommate. I’d never been to that house because I preferred to live alone, but I went anyway. I got there, hoping that Alexandra wasn’t there so I could speak freely to Sylvester. I knocked at the door and no one opened. I just stood there, thinking I should go back home. When I was about to walk away, Alex opened the door.

Alexandra: I was new, so I didn’t realize that it was weird for Odwa to be at my house. I did what any hostess would do, invited him in for coffee and cookies and we sat at the table where he somehow started telling me his entire life story, which, I also didn’t realize at the time, was a rare moment in history.

Odwa: This began the 3 month long friendship which lead to people being concerned about the “white missionary” hanging out with the “mysterious loner/ex-thug” which forced us to talk about our feelings for one another.

Alexandra: On October 27, 2011 we told each other, “I love you”, which wasn’t supposed to happen. I am white, he is black, and in LA that’s totally cool but in Stellenbosch, South Africa it’s downright wrong. According to Kayamandi churches, dating is a sin but we decided we wanted to use these difficulties and our relationships to teach the kids around us and the rest of the community as much as we could, with all of our faults, about what real love looks like.

Odwa: Against all odds, on January 2, 2013 I asked Alexandra to marry me and she said, “You’re lying!!” followed by a, “Yes.” We couldn’t be happier and we are grateful for all the challenges we have faced because it forced us to know without a doubt that we are both willing to fight for each other, whatever it takes, and we are blessed to be able to share our story with you. It was worth it and we know that it’s only the beginning.

Biggest congrats you two! We wish you all the best and can’t wait for your wedding!!