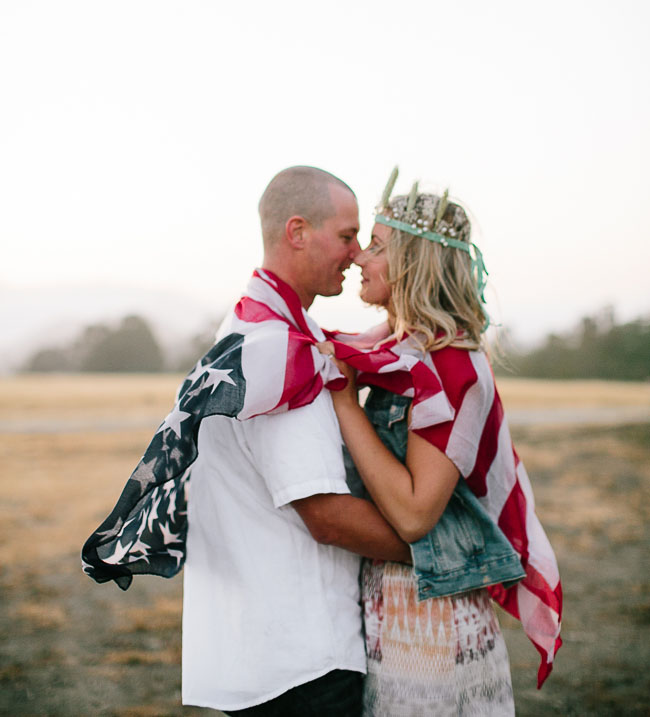 We love it when couples decide to go big with a fun theme for their engagement session. And Krysta + Eric’s whimsical styled engagement shoot, captured by Mirelle Carmichael Photography, felt like just the right way to end the week + gear up for the holiday weekend ahead!

A day embracing all things red, white, and blue was more than fitting for this fun couple who are both from California, but met in Hawaii. Two free spirits who really embrace life + all the adventure and beauty the US has to offer. When styling the setting, Kate from Noonan’s Wine Country Designs really ran with the Americana theme, taking the color palette to the next level with textured flowers and foliages, that felt representative of fireworks, gracing the table for two set up on ranch’s historic bridge. And, of course, it was a must for the shoot to end with this cute couple lounging on the front porch, sparklers in hand! Love it! 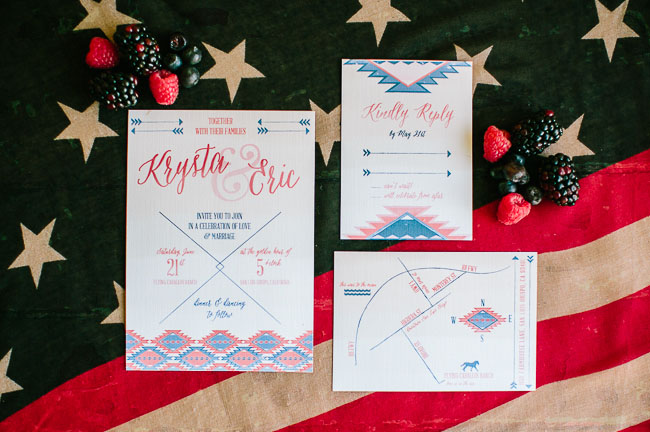 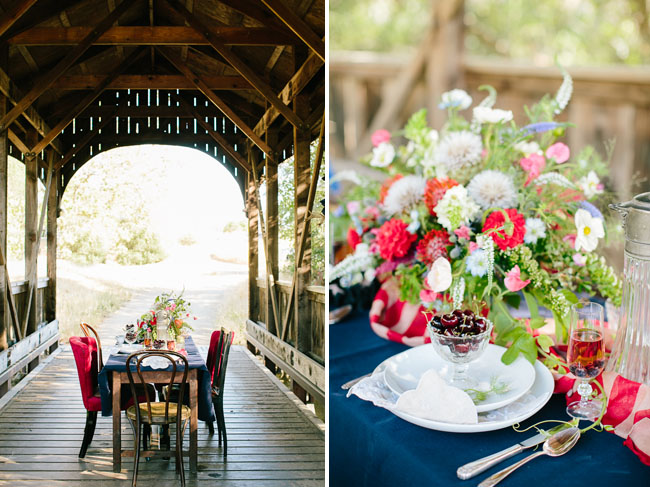 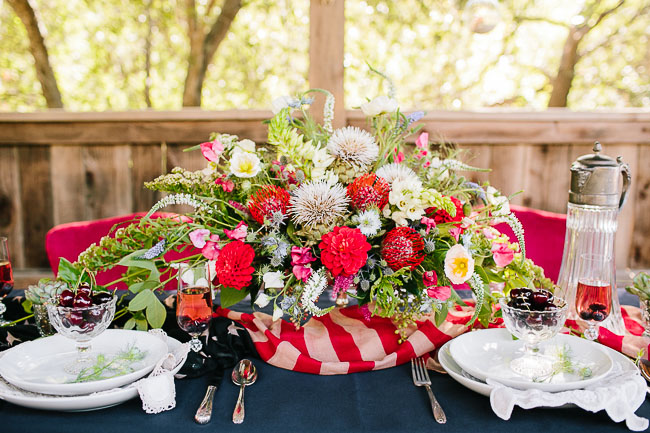 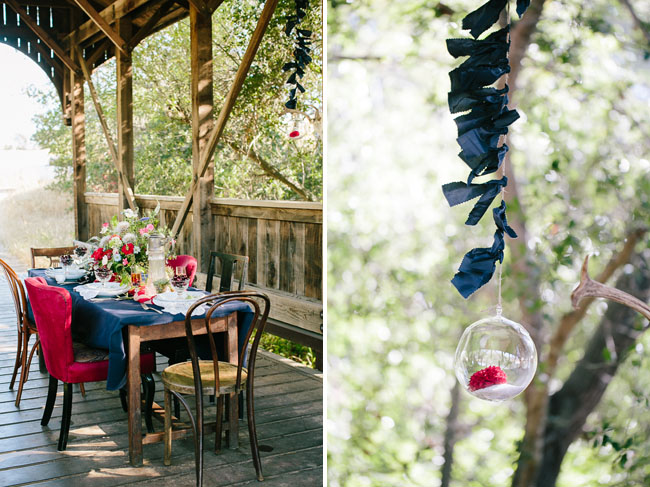 To really get that firework-like effect, Kate went with blooming artichokes, paired with red summer dahlias and pin cushion proteas. Icelandic poppies, white veronica and trailing foliages were used as accents to bring in a wild, overgrown feel. 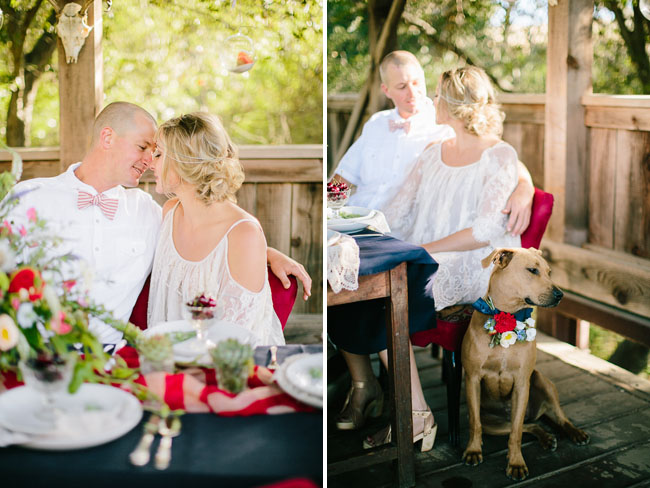 There’s really nothing cuter than a pup in a floral collar! 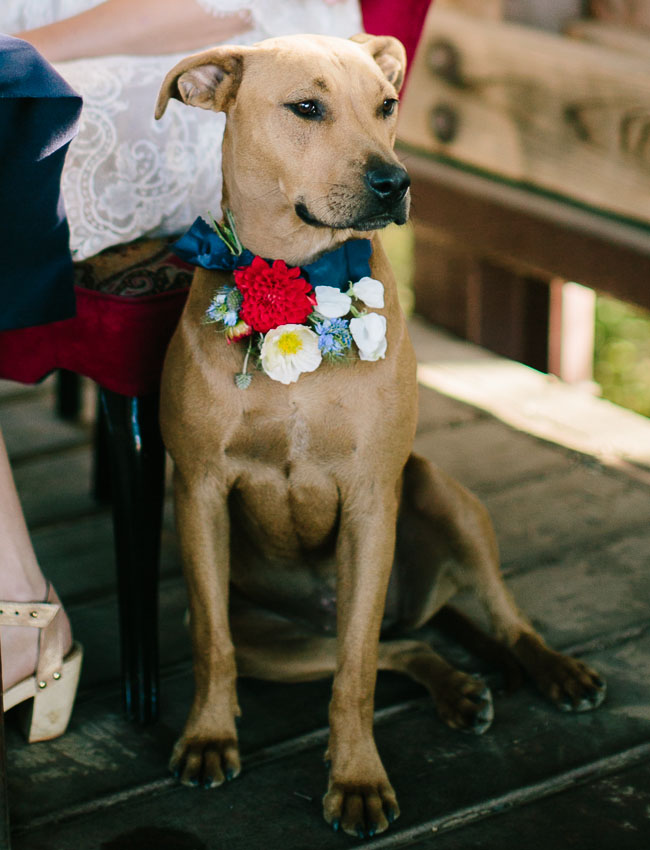 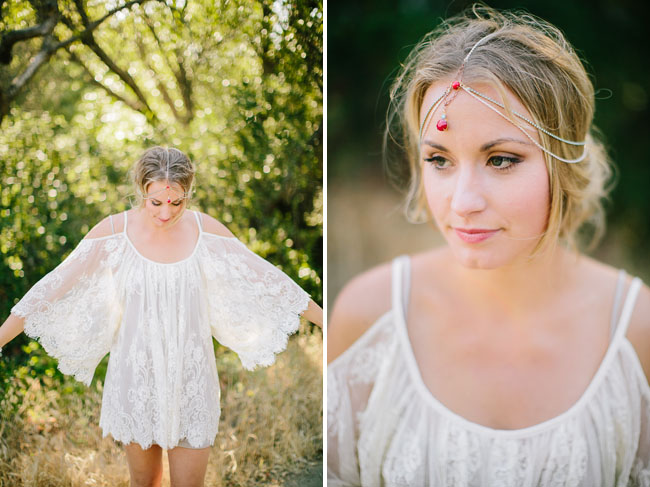 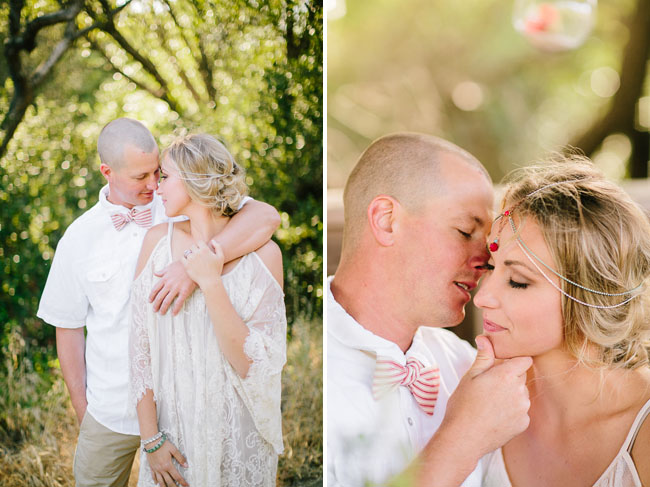 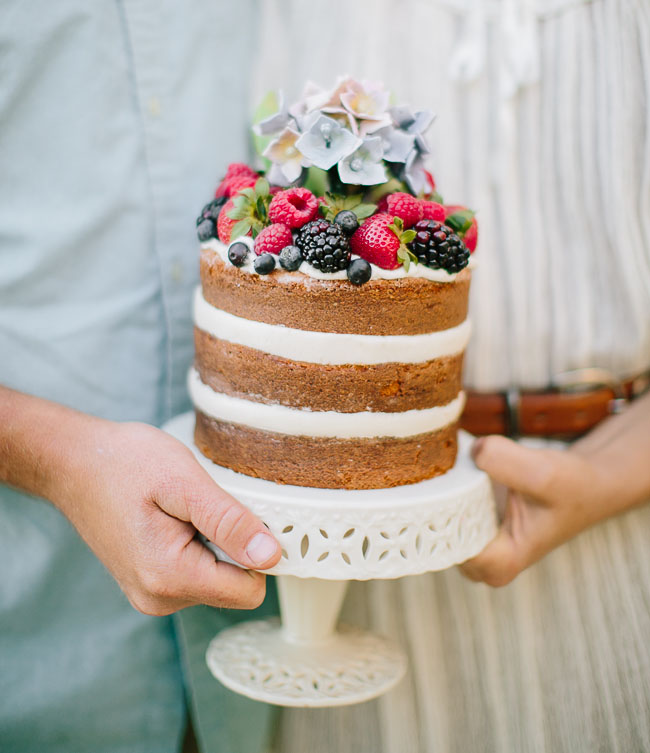 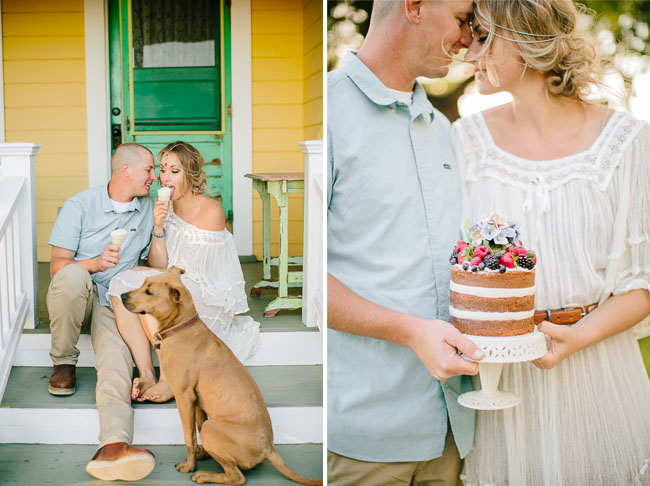 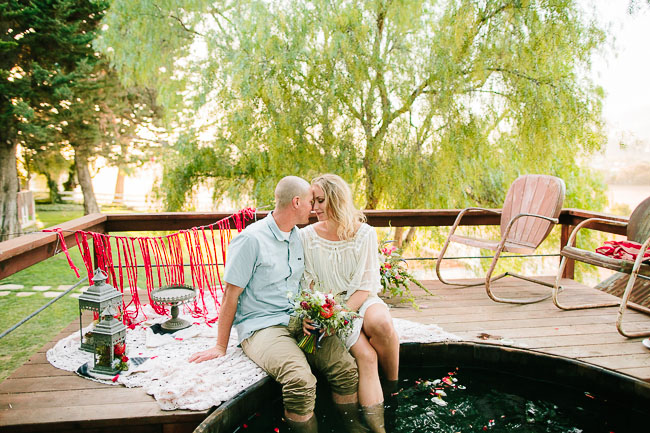 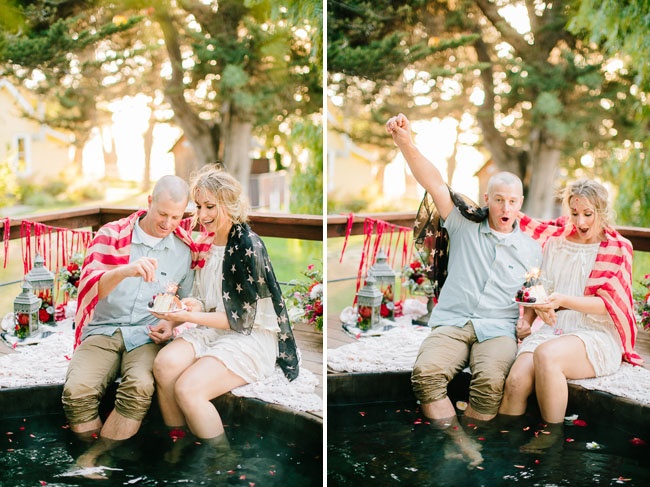 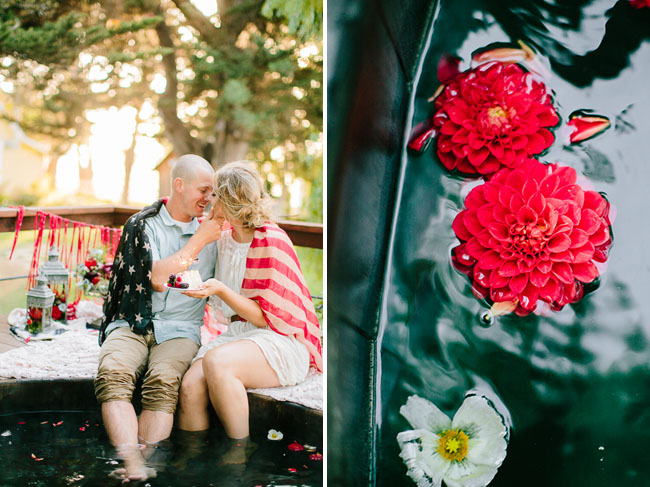 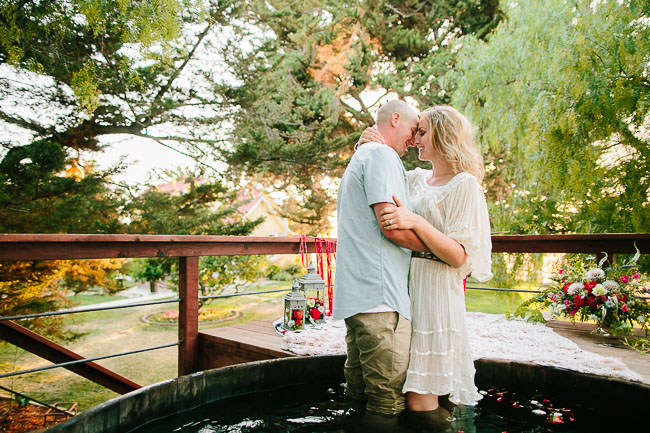 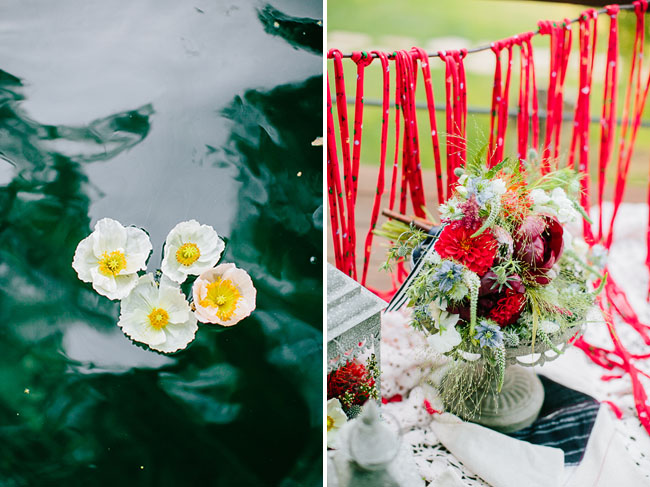 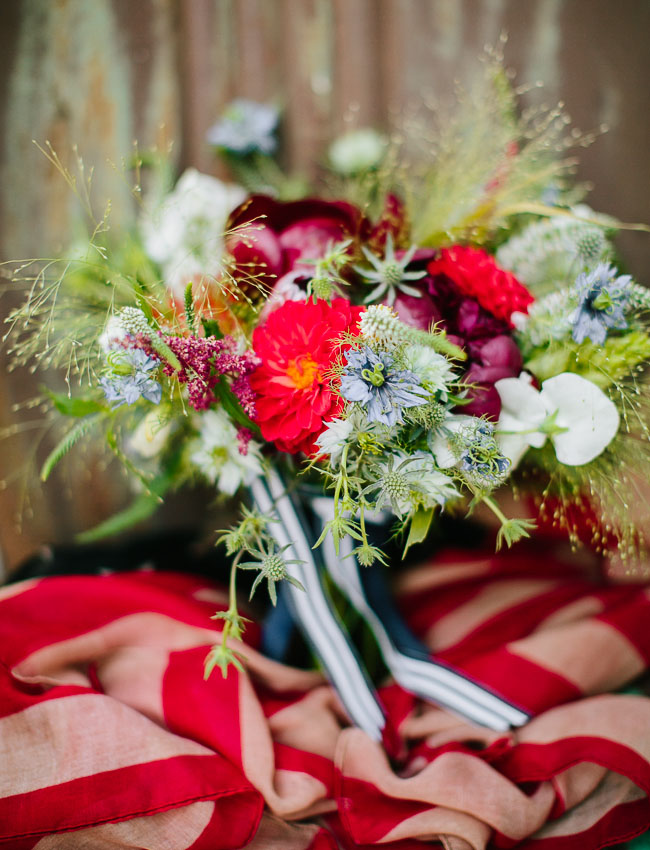 Loving those sweet shots of K+ A above! And how great is that liberty crown Krysta is wearing in the next couple shots? It was crafted by Cheryl Tivar from vintage velvet ribbon and wheat! So awesome. 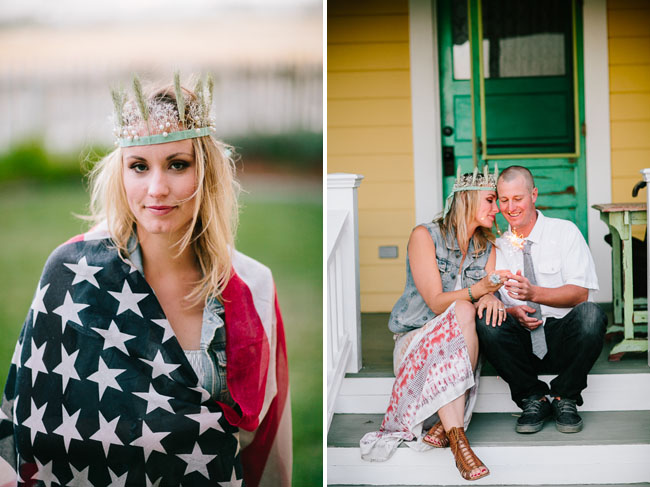 Krysta + Eric have a super sweet story to share with us, but first we want to wish you all a happy Fourth of July! Have a safe + fun holiday and we’ll see you right back here on Monday with a super sweet camp wedding! :)

Eric is from Half Moon Bay in Northern California and had lived there most of his life. I am a Santa Barbara local and had lived there for most of my life as well. After awhile both Eric and I got hit with a little wanderlust, and still having not met, we both independently decided to take off from our homelands and transplant ourselves somewhere tropical…and what better place than Hawaii; a land of rainbows and waterfalls. We met in Hawaii through a mutual friend on the way to a BBQ. During that BBQ Eric was tenacious and persistent enough in his gentlemanly pursuit of me, that at midnight I agreed to take a walk to the beach with him to gaze at the full moon and take in the beauty of the tropical night. There must have been something special in the air that evening because we talked for hours and hours and had to be pulled away by our friends to all go home. The next morning I awoke to two texts from Eric on my phone. The first text read, “I love you”, and the second text read, “Wait, no someday I will”. I smiled.

During the next several months we worked, played, and moved in together in Hawaii and about a year later decided to move back home to California. There we met each other’s families and closest friends, went on road trips and hikes, and shared holiday gatherings.

Eric proposed on May 23, 2013, on a beautiful hiking trail in Montara where the views were breathtaking! The entire coastline stretched across for miles and the deep valleys lead to views of the city behind them. Being so high the temperature had dropped significantly! I turned and asked Eric for my jacket. He knelt down, unzipped the backpack and handed me the sweatshirt. I went back to embracing the view. Noticing he wasn’t standing there yet, I turned and saw him on one knee, with a little black box in his hand.

“I have been in love with you since the day I laid eyes on you…” I didn’t even let him finish I jumped on top of him and screamed, WHAT? OMG! Taken back. Eric said, ” Is that a yes?” To which I replied, “Yes, yes, yes! A BIG FAT YES!”

Congrats, Krysta + Eric, and best wishes for your upcoming wedding!