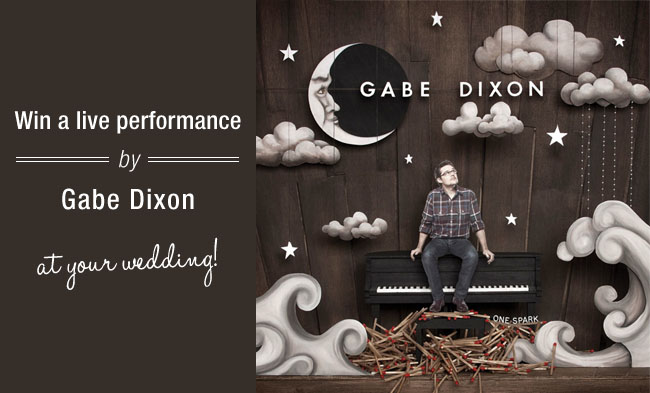 A few weeks ago, we announced a pretty rad contest – the chance to win a performance by singer songwriter Gabe Dixon at your wedding reception. And today we have the four finalists! Read their sweet stories about their favorite story of them as a couple and let us know which couple you think most deserves to have Gabe play their reception. And if you missed it, Gabe has such a perfect wedding song called My Favorite which we gave away the mp3 to (along with a song called Even the Rain) which you can download both tracks.

*****Super excited to announce the winners of the live performance from Gabe Dixon at their wedding! The winning couple is…….Jae + Brent!!! Congrats you two!***** 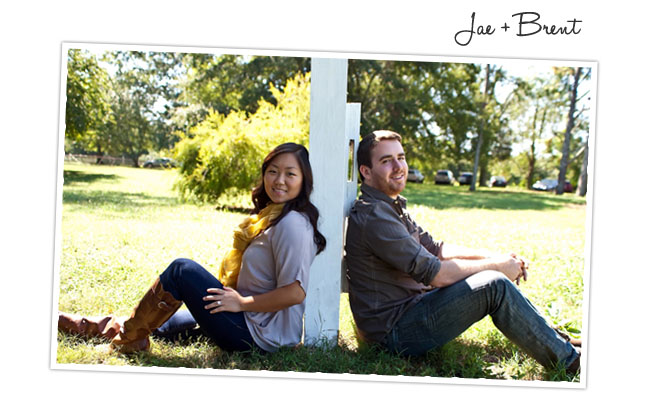 During high school, I was a sports jock. I played baseball my entire life since I was 4. I was starting short-stop for the Varsity Team when I was only in 8th grade and played every year. We won state championships and everything and I met my fiancé Jae in the 10th grade during a P.E. class we had together. Over the year I realized I had to be with her. Not like puppy love, I had to actually be with her. I would look forward to going to school every day and seeing her as often as I could. Anyways, Jae was an all-star soccer player and I found out one day during baseball practice that the boy and girl soccer teams got to practice together every day and even travel to games together. Even though I had never played much soccer in my life, I decided to up and quit baseball my senior year, even though I had scholarship opportunities. My coach and parents were furious as you can imagine, but my teammates all understood and quite frankly were tired of hearing me talk about her every game and practice. My heart wasn’t in baseball any more, it was with her.

Anyways, soccer season came around and I showed up for the tryouts. Everyone was confused and I had been practicing and watching YouTube videos on how to play soccer so I had gotten pretty good at it! I tried out for the team and made it. I got to see Jae every day during and after school and we became good friends. So good that we began dating during our 3rd game! It’s been 6 years now and we are finally engaged high school sweet hearts. I’ve had to pay for my college tuition ever since instead of baseball scholarships and I wouldn’t change a thing. It was all worth it and I would do it all again. Me and my fiancé have listened to Gabe for the past 7 years, driving to Nashville to see his shows any chance we get. Being that I can’t afford a lavish wedding, if Gabe showed up at our wedding I believe my fiancé would just die… Thanks for this opportunity guys! 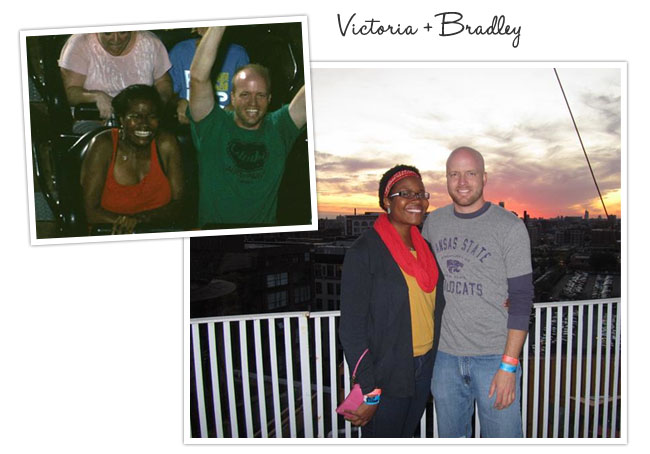 It was about a year into the rekindling of our relationship that the infamous bet was made. It was based on a challenge that would force both of us to face our fears. No matter how many times I have talked her through it, Victoria has an irrational fear of roller coasters. No matter how many times she has explained to me, I still cannot understand the joy found in a guilty pleasure like the story of a werewolf and vampire love triangle. The bet required her to ride two roller coasters at our local amusement park; while I, on the other hand, would have to sit through two hours of a recent movie release of the inane story of a lonely girl torn between two mythological creatures.

At the amusement park, to prep for a larger ride, we first went on the giant swinging ship. This previously-thought mild ride induced involuntary, blood-curdling screams from Victoria. Since passengers faced each other, I couldn’t help but notice their concern with one of them mouthing, “Are you OK?” to Victoria. At first, I had thought she was having fun, but a quick glance at her furrowed brow and deathly grip made me realize how serious this was. Feeling guilty, I asked her if she wanted to be done for the day, but she insisted that with a break and “…never going on that thing again,” she would be fine and would fulfill her end of the deal. In fact, she went beyond and rode three roller coasters and many other rides that day, simply to spoil me in spite of her fear.

And I sat through all two hours of the longing glances and desperate phrases on the movie screen and found that, because Victoria’s hand was firmly in mine, that I could handle this challenge and it wasn’t time wasted. From this, I realized the importance of a person who can both spoil and challenge you in a relationship. Victoria challenges me to make me stronger, even if it’s not easy. But she will also spoil me to remind me it is all for love and to make me happy. As long as she is there, I’m sure I always will be.

The top picture is on one of the roller coasters. Don’t make my mistake and think her show of fear is a smile. Then, the bottom is on a roof in St. Louis prior to seeing Gabe Dixon in concert this past year. 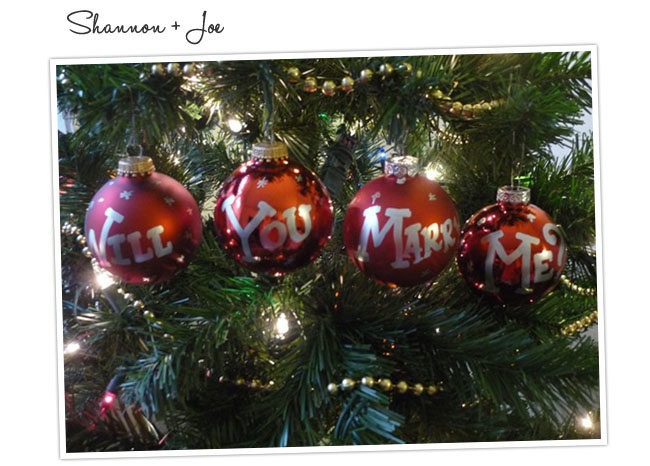 I have to admit that our proposal story is one of my favorites. We had been dating for over five years and were currently doing the long distance thing. I lived and worked in Chicago and Joe, my then-boyfriend, worked in St. Clair Shores, MI. We visited each other once or twice a month, and on one special visit early in December, he surprised me by taking an earlier train into Chicago, bringing with him this mini Christmas tree he wanted to decorate at my apartment. We were hanging the ornaments, him handing them to me one at a time. He hands me one in particular, which only says “Will.” And, of course, I say, “Who the heck is Will?” He shrugs it off and says these ornaments belonged to his mom. “Umm… okay.” I proceed to hang it in the very back. The next ornament says “You.” I start putting two and two together and look at him, anticipating the next ornament. He has them both in his hands – “Marry” and “Me?” I felt myself get pulled into a surreal moment of disbelief, and then he hands my the bulbs, gets down on knee, pulls out a ring, and asks me to spend the rest of my life with him. Of course, the answer was yes. It was the best night of my life, and the perfect proposal. A little bit funny, a little romantic, and completely adorable. We rearranged those ornaments (since one was hiding in the back and the others had become strewn across the couch in all the excitement) and took this photo below.

Kent and I met at the Ride of Silence in May 2010 at the International Velodrome at Bloomer Park, Rochester MI. I was riding in honor of my ex-husband who was killed while riding his bike in Newport Beach CA in July 2009. Kent was a volunteer at the event. We started talking after the ride and I could tell there was an immediate attraction. However, he did not ask for my phone number and I thought I would never see or hear from him again.

About a month later, I got an email from Kent asking if I would be interested in having dinner with him. He knew I was from Louisville KY and that I worked for the US government. The event organizer was able to determine who I was from that limited info and gave him my email address. We had our first date on 6/24/2010 and have been together ever since. On our six month anniversary, Christmas Eve 2010, we were running in the snow in Bloomer Park and came across the velodrome where we met. He got down on his knee and proposed to me. We will be married 10/11/2012 at a destination wedding, but will be having a reception the following weekend in Louisville to celebrate with our families & friends.

We heard Gabe Dixon at a Live Lunch (wfpk) in Louisville and would love to have him perform at our celebration reception.