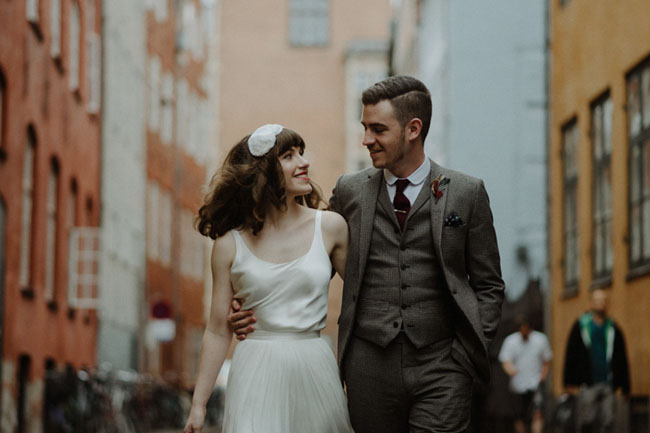 Over the years, we’ve seen + shared our fair share of stunning elopements in breathtaking natural environments, but to see one in the heart of a bustling + beautiful urban city like Copenhagen is a major treat. Kate + Danny are super down-to-earth-and laid-back Aussies who decided to kick off their 6-week European vacation by secretly getting married in a way that was meaningful to them. On a cold + rainy morning, they tied the knot in Copenhagen’s beautiful city hall and then spent the rest of the day exploring the colorful + charming city streets with their amazing photographers, Dylan + Joanna of The Kitcheners.

Kate + Danny share, We have been together for nearly four years now and have been discussing marriage for at least 3 of those years. Eloping (in secret) in a country as beautiful as Denmark was the only version of a ‘wedding’ that did not have any drawbacks for us. We never liked the idea of a large wedding; we were worried we would feel pressure to ‘perform’ to a crowd when we wanted to focus on each other. We also chose to elope (no proposal, no official engagement, no giving away of the bride etc.) as a way to maintain the equality that we have in our relationship. 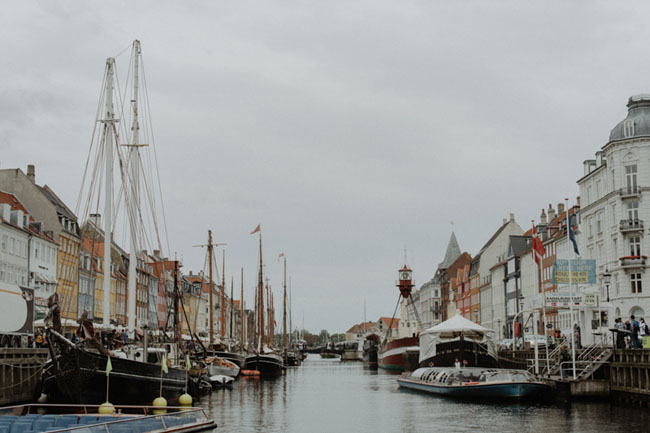 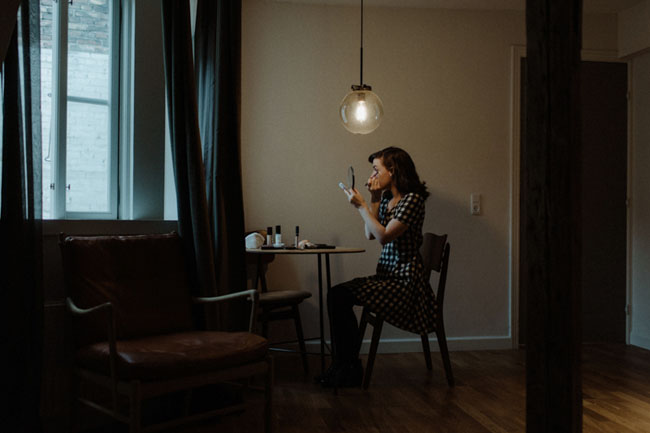 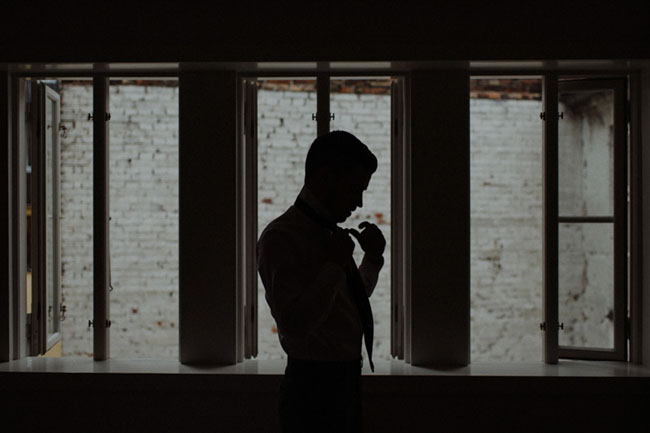 Danny: I absolutely broke down when I saw Kate in her dress. I’m a pretty emotional person to begin with but seeing her there, looking so elegant and beautiful made everything feel real. You can see in the photos she tilts her head and smiles at me after I’ve seen the dress for the first time. She does this head tilt every time I cry and it only serves to make me cry more. Every time she has ever given me this look, I go weak and when she gave me this look, on this day, I’ve never felt so strongly about a person in my life.

Kate: Choosing the most memorable moment is almost impossible! Highlights for me are the amount of people that stopped us in the street to congratulate us (Danes are the nicest people!), the magical feeling once we walked out of the town hall and realised it was done, we were married! And of course, the fact that Danny cried at almost every turn! I never ‘bought in’ to weddings in that way before; in as much as that you could feel so much on a pre-planned, designated day. But it was almost overwhelming how happy I was. 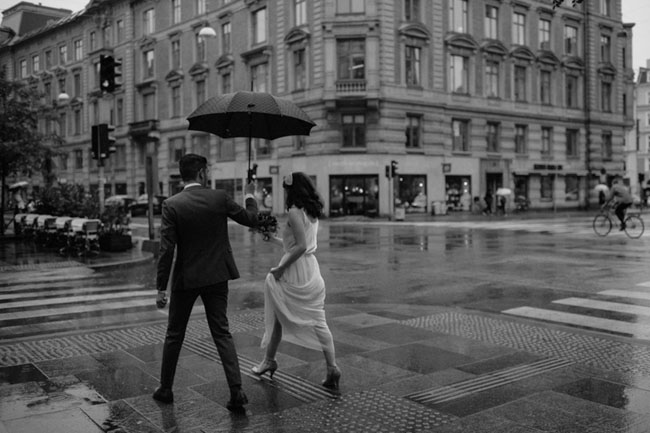 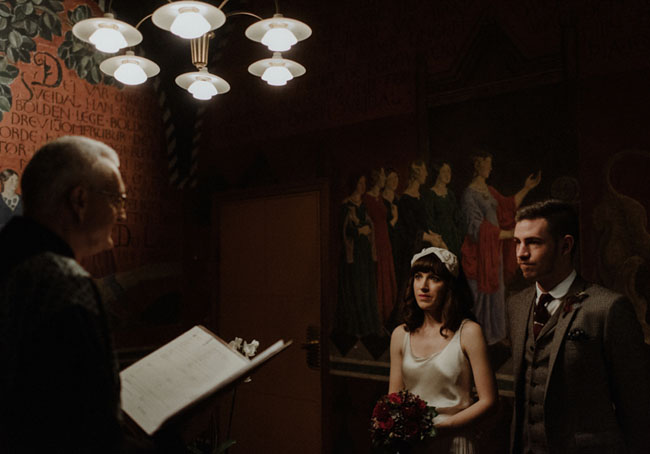 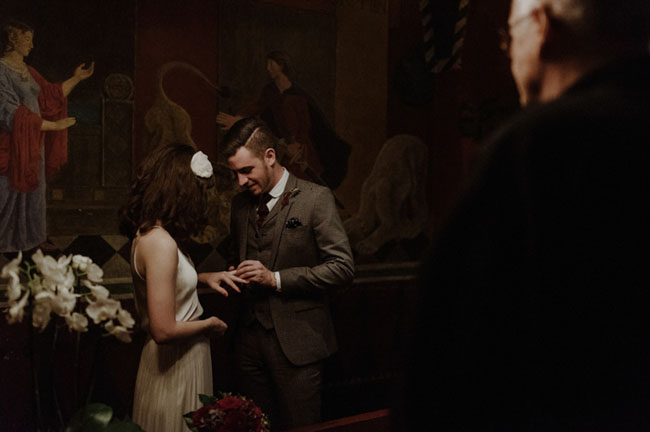 Eloping in secret suited our personalities perfectly; we have done everything in our relationship so far on our own as a team and this was no different, so of course the planning was shared equally between us. The moment our family found out the first thing they said is ‘this is so you!’ having it be a surprise also meant that we got some of the most excited and lovely responses from friends and family. 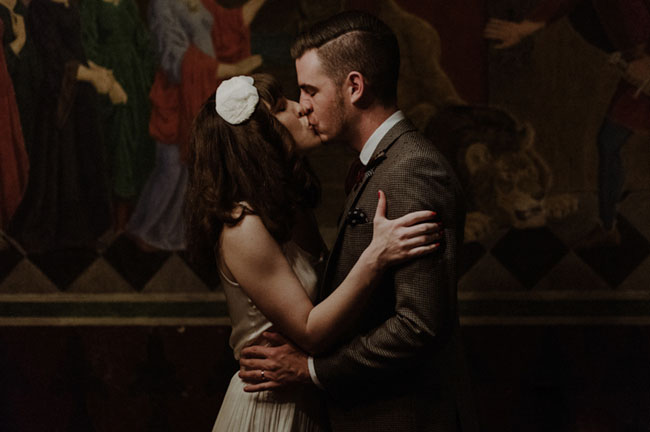 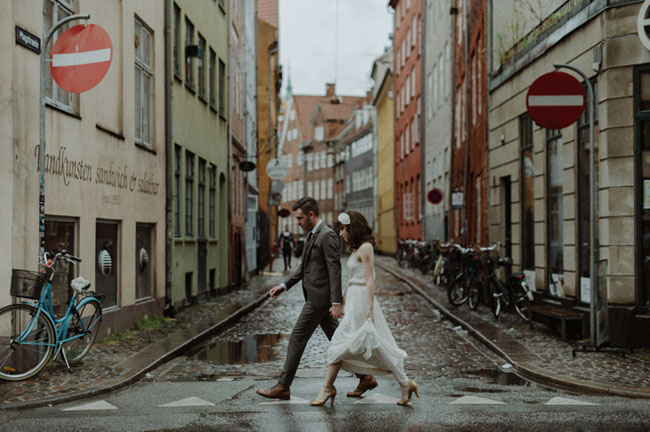 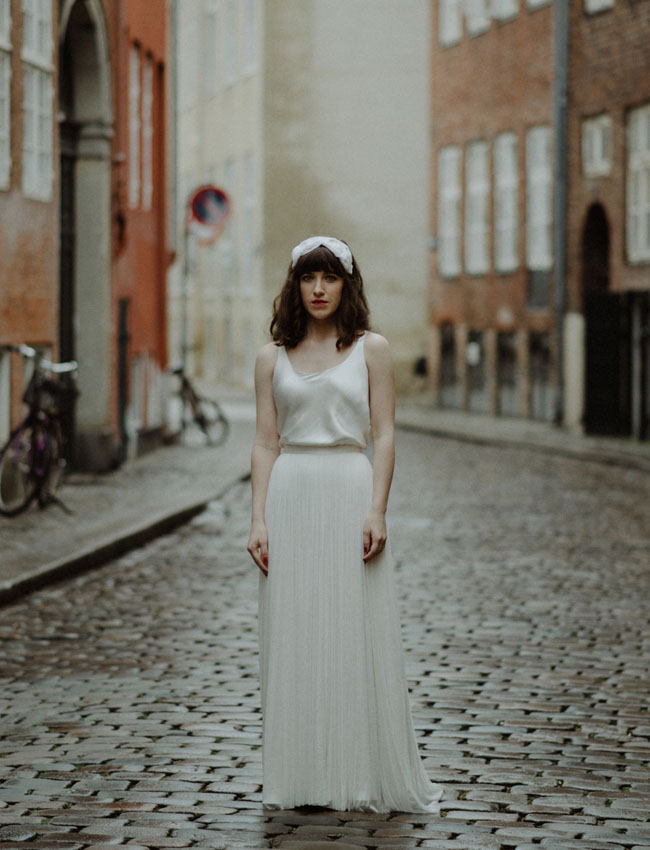 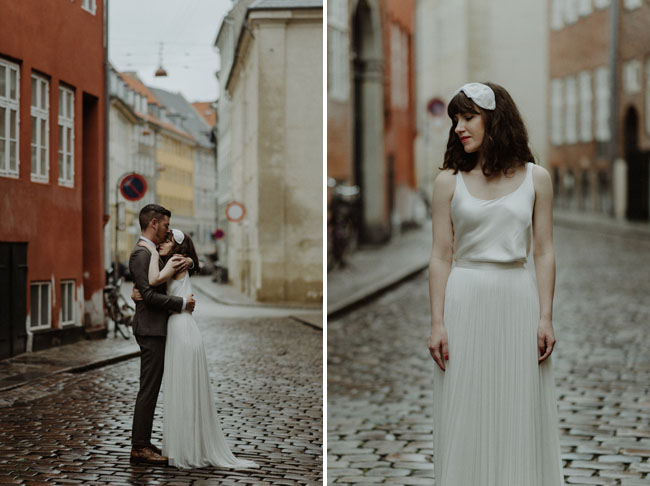 Kate’s darling wedding day look was pieced together from BHLDN. She’s wearing the Anika Tulle Skirt & In Perpetuity Camisole. Her headpiece was a vintage find from Etsy + her shoes were Chelsea Crew via ModCloth. 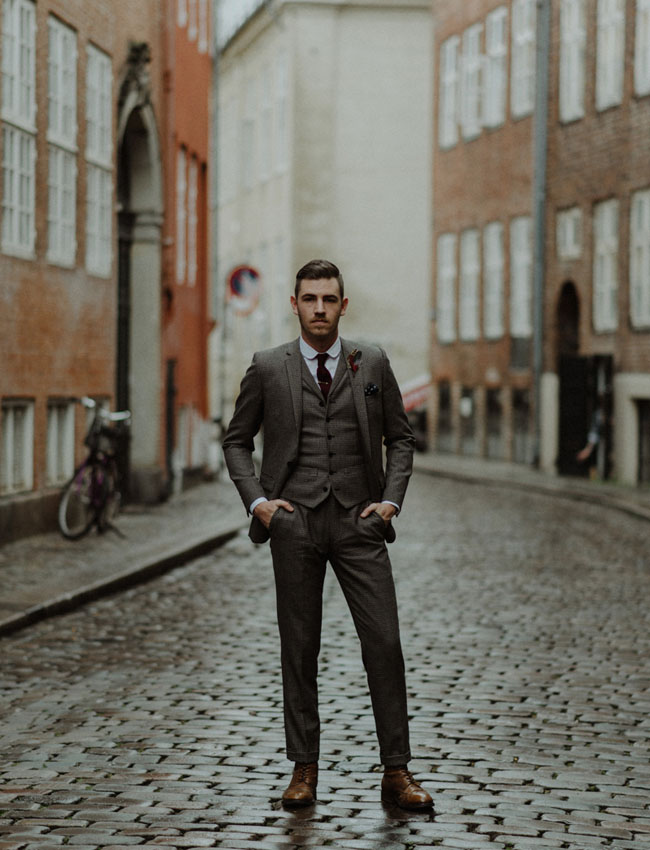 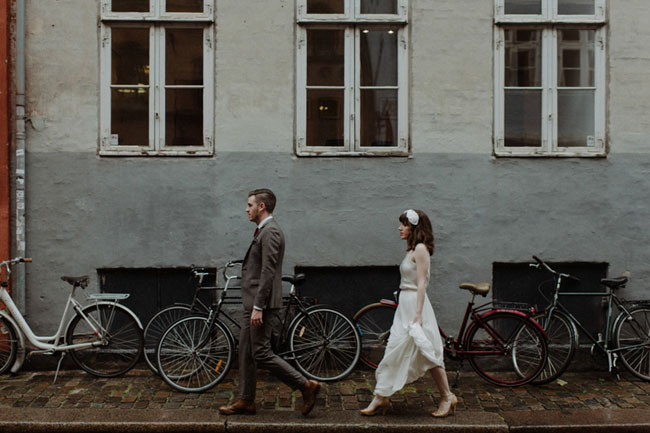 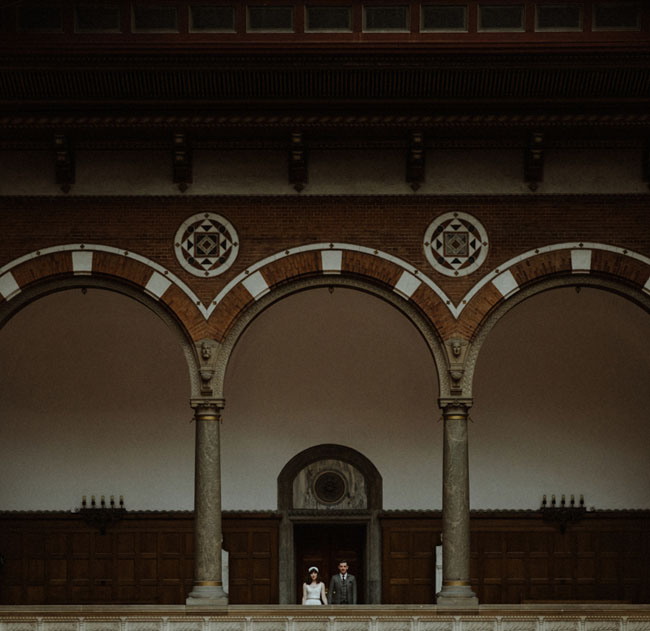 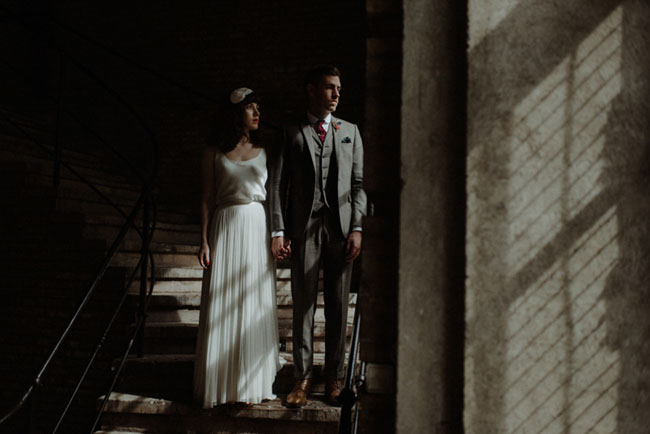 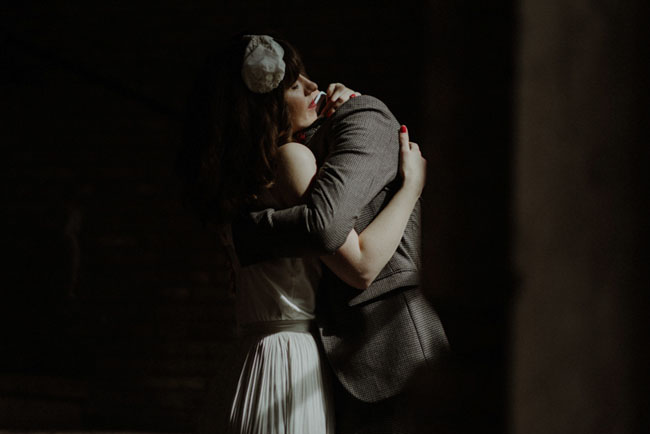 Why did Kate + Danny decide to elope in Copenhagen? They say, Denmark is also a very socially progressive country; being one of the first in the world to legalise same sex marriage. Neither of us ever liked the idea of getting married in our home country (Australia), where the celebrant is legally obligated to say that marriage is between a ‘man and a woman to the exclusion of all others’. Getting married in a country that not only accepts but celebrates same sex marriage (as well as opposite sex marriage of course!) had the outcome of making the day more meaningful for us.
And also… it just sounded like so much fun! 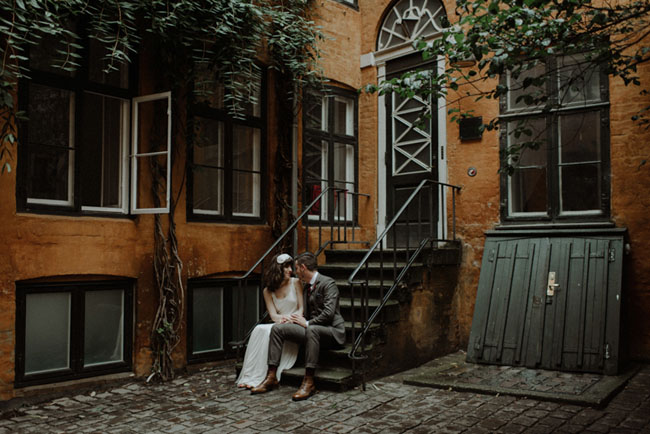 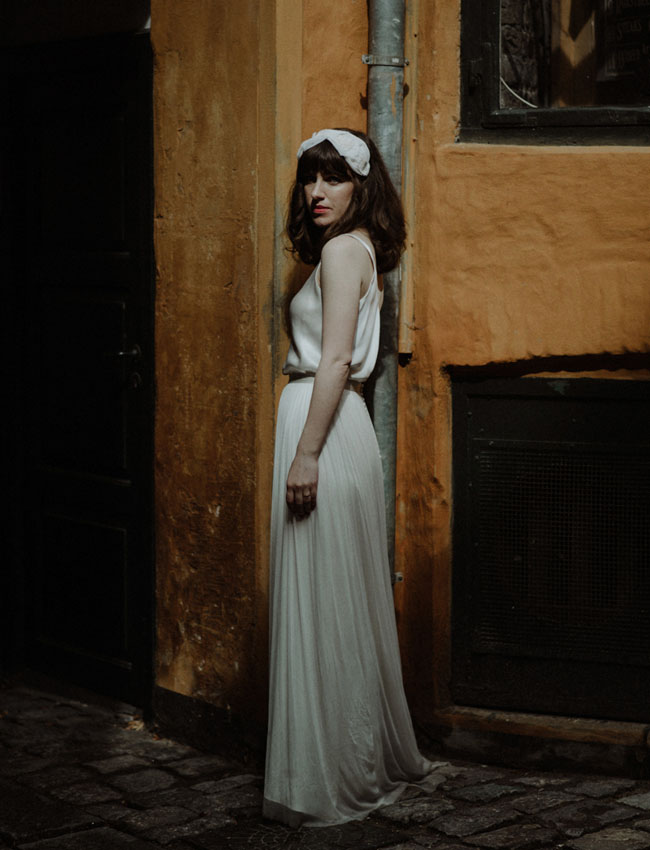 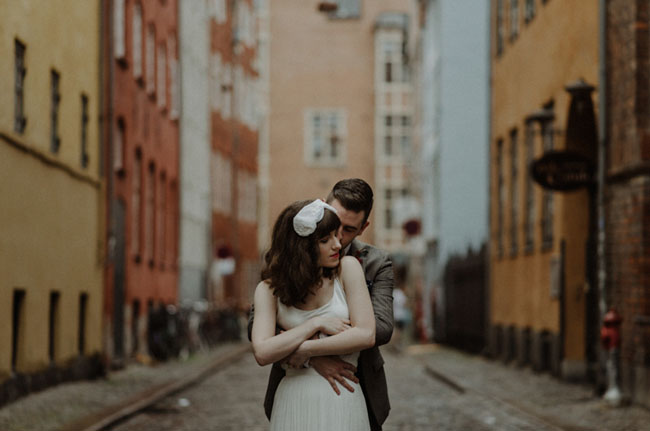 Do it! It’s an amazing experience that brings the focus back onto the couple celebrating their relationship and away from keeping an army of guests entertained.

Spend your money where it matters to you most. For us it was the photographs (shout out to the Kitcheners!), as these are what we will be looking back on in 60 years.

If you are travelling to have the elopement, it can seem daunting to think that you have to organise multiple aspects from halfway around the world. In reality it wasn’t, we had a lot of help from some genuinely nice people who helped us do things like process our documents at Copenhagen Town Hall in advance.

To be honest, the only advice worth giving is just to do what feels right and what suits the couple. Nothing about our elopement was more or less difficult than any other type of wedding, if it makes you happy and means something to you, there shouldn’t be a problem