Katie and Paul Towers were married on September 20th, at her parent’s home in Palo Cedro, CA (far Northern part of the state). She documented her planning process on her wonderful blog – A Backyard Wedding. For you future brides, there is lots of great information on how to have a wonderful day while not spending a fortune – and really making it about the two of you. When I saw these photos, I knew I just had to share. They had a lot of great ideas that turned out beautiful. Photography by Bradford & Mia Shepherd. 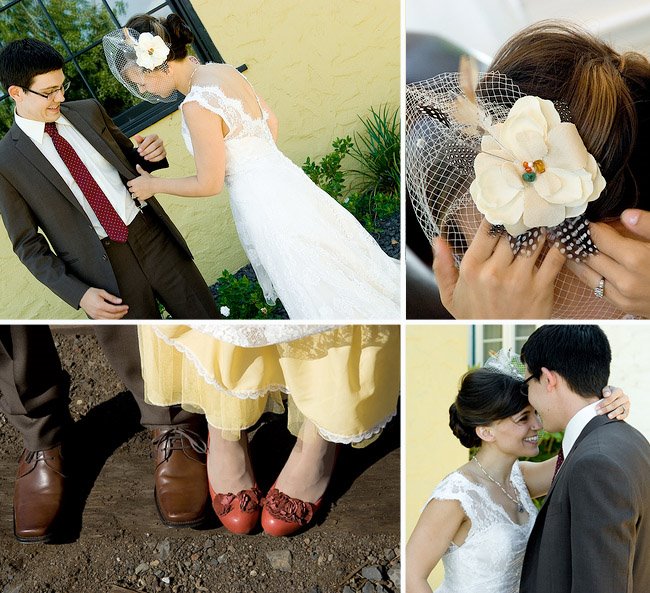 Katie wore a Casablanca dress (style 1816) and she made the veil/flower combo herself! Love her red shoes! The bridal party walked around town before the ceremony to get some fun photos. 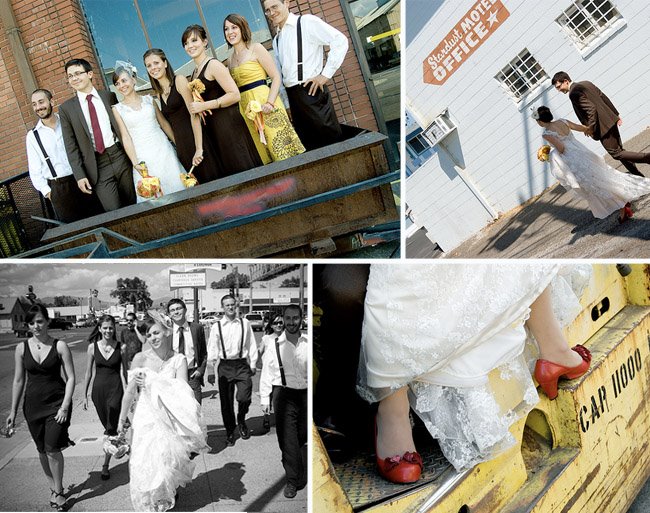 The ceremony was held in her parent’s pecan orchard (how cool is that!) and the reception was in the backyard at her parent’s house. We had the main dishes catered, but my mom made the salads and appetizers with the help of a family friend (who stepped in that day to help my mom when it was clear she shouldn’t be doing it herself like she was insisting upon). The food, particularly the stuff we made, was so freaking good. Also, our caterers source all their stuff locally and we tried to use as much local foods as possible in ours, while still sticking to our budget. In total our food cost $15 a person and we had a lot leftover. 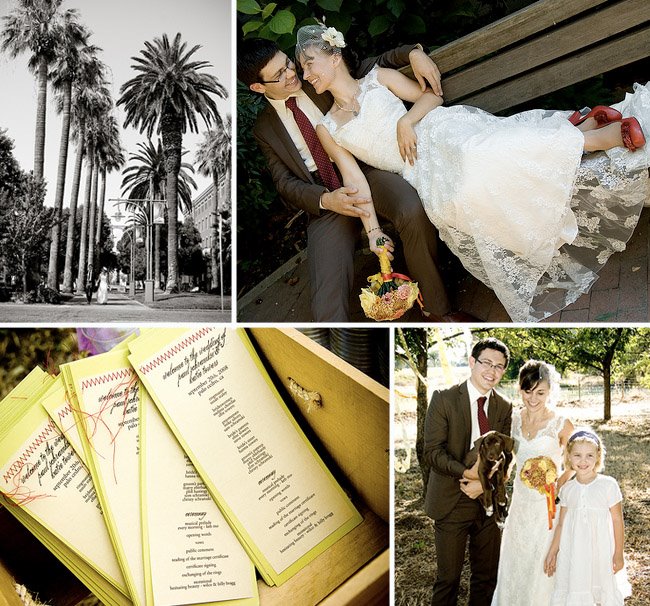 Paul’s wedding band is from Ash Hilton – who we featured here earlier in the week! The design on his ring is two curly plants loving on each other. Ash is the sweetest, most helpful, charming, lovely artist I’ve worked with on Etsy. I almost gave up vintage and matching had him make me a band too, but I have short tiny fingers and his designs don’t really work on a thin band. Katie’s ring was designed by Ellie at Greenlake Jewelry Works based out of Seattle. They have a great online design process where you show them things you like and they create sketches and work with you to find something you like. They also use ethical stones.

We walked in to “Every Morning” by Keb Mo, which is beautiful, but since we never practiced anything before the actual ceremony was about three minutes longer than the 30 seconds it took us all to gather in the front. That ended with me making a big “cut” sign to our friend in charge of music and everyone laughing at the endless music. Silly things like that, my dogs deciding that they needed to hang out with us during the ceremony and my little cousin having to run up and grab my puppy who was attacking my dress, and horses making horse noises in the background really made our ceremony personal for us. – love this! 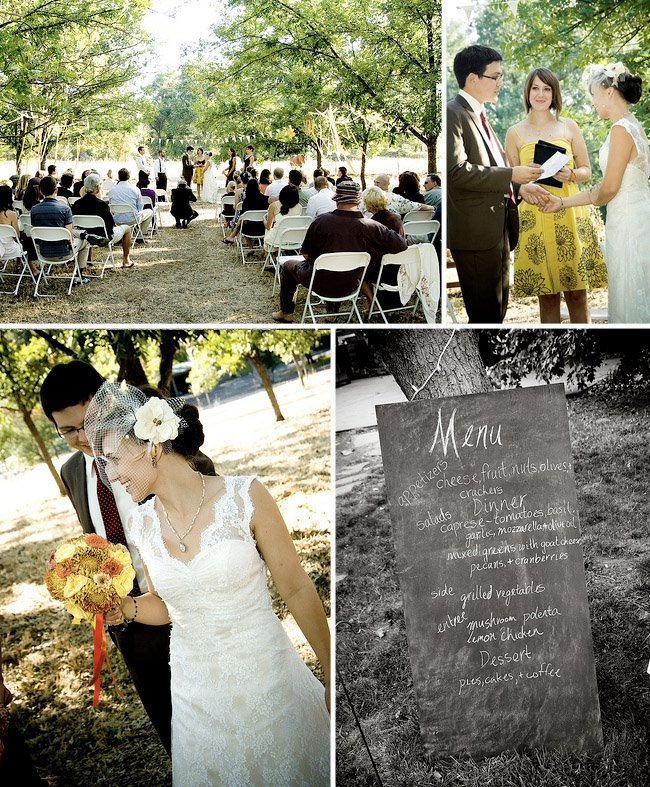 Katie did her own flowers. Some were ordered online from the flower exchange (roses, mums, and snapdragons) and some were purchased from a farm stand (zinnias) down the street. Both looked great, and even though we ended up with flowers in varieties and colors totally different than I ever thought I’d have at my wedding, it worked and looked amazing. Bottom line is that it’s hard to mess up flowers. I love all the vintage glasses they used for the centerpieces and the different fabrics. 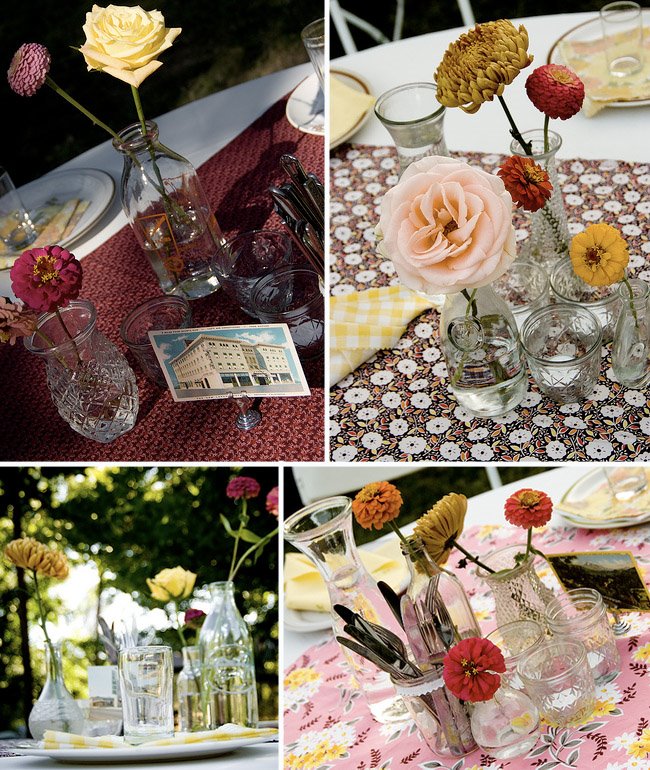 They also had a great photobooth which was a huge hit.

If you are thinking of creating your own photobooth like Katie did, here are some tips from Kaite on how she created hers:

For our photobooth we took two large sheets of fabric (upholstery cloth works better because it’s wider) and stapled them to the overhang on my parent’s deck. You could also make some sort of frame to hang the fabric from, or hang it from a tree. I own a ton of hats, but I also bought some other props like a boa and silly glasses from a local party store (they were cheap). I made mustaches from felt.

I stuck all the props on a table and put a polaroid camera and a box of film on the table with a cork board and a sign to take a picture for the board. A few people took extras to take home with them, which was fine because we bought a ton of film before they decided to stop making it! A bunch of people also took pictures with their digital cameras, so I could see this also working if you just had a digital camera set up for people to use.

People loved it. Way more than I thought they would. Like it was seriously in use for both days surrounding the wedding and the entire wedding reception. My parents even left up the fabric for a few days after the wedding because their friends kept taking pictures in front of it. 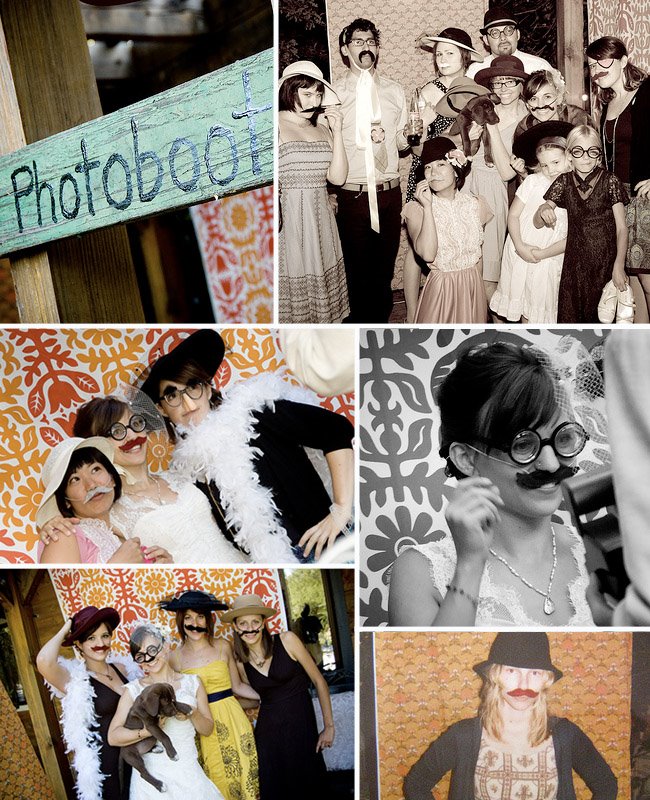 The cakes & pies were made in Sacramento and brought up by friends the day of the wedding. For 90 people we bought 6 7″ cakes (2 each of 3 flavors) and 6 pies (3 each of 2 flavors). We had two whole cakes and 1 entire pie leftover (although i hid the pie so that wasn’t a surprise). People ended up sharing pieces to try different flavors so we used a lot less than what serving guides say you’d need.

Some additional hits + misses from Katie:

Hits:
– The photobooth was packed all night
– The ceremony being totally relaxed and trusting others to make it special.
– The food, particularly the food we made and the desserts.
– Having puppies running around.
– Wearing a dress I felt comfortable mucking up.
– Having a friend dj. He played great music (lots of soul, funk, indie stuff, mixed with some hip hop for the masses).
– The mismatched dishes and vases that we spent MONTHS thrifting. People loved them and we are now using our favorites in our house instead of having registered for dishes.
– Being open to things not being perfect. I love pretty, expensive things, but with our $10,000 budget I had to pick my battles. I’m pretty sure we stayed within a few hundred of the budget (I know we didn’t go over by more
than $200 at most).

Misses:
– Most people missed the guestbook, which wasn’t really that big of a deal as I wasn’t ever even set on having one in the first place.
– Not being clear with my husband before the reception that I’d like to spend time with him. He had a lot of friends there that he hadn’t seen in a long time (whereas most of my friends are local) so he wanted to run around and talk to all of them. I totally supported that but in retrospect I’m a little sad that we spent very little time together at the reception. I felt like I spent a little bit too much time wandering around alone while my friend & family hung out in little groups around me (I think assuming that I was busy, occupied, etc).

To read even more details, check out A Backyard Wedding. Thanks so much for sharing with us and congrats again to both of you!