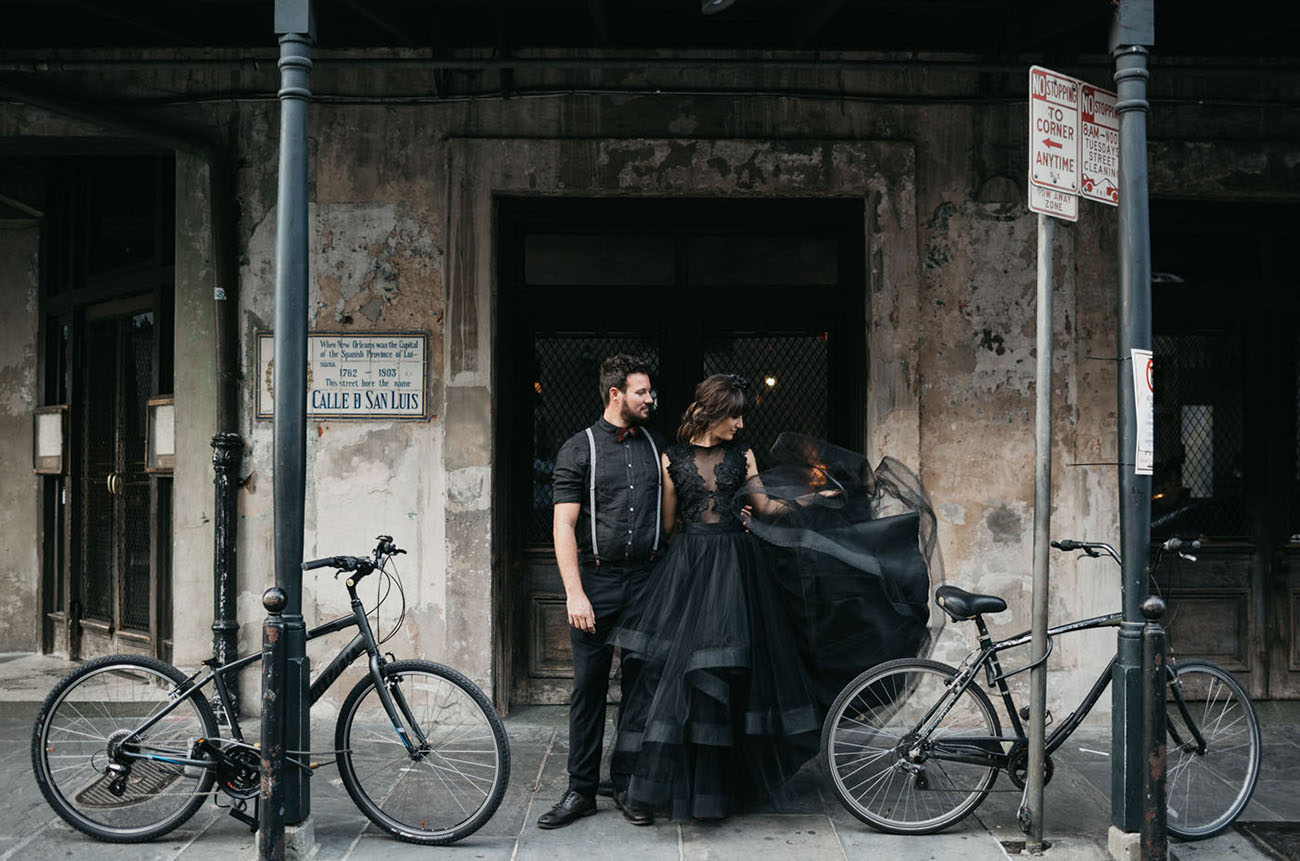 Ready for one wild story? Nadia + Sern met while working on a yacht. He’s from South Africa, and she’s from Australia. As they both are constantly working days at sea, they planned this elopement in 3 months and brought only 7 of their closest friends.

They wed on a Thursday. She wore black. They shared personal vows in the courtyard of The Pharmacy Museum in New Orleans. Today’s epic elopement is a reminder that when it comes to your wedding, there are no rules! Instead of a cake, they had a cheese tower. Afterwards, they all headed to a bar where they drank Negronis and then signed their names on the ceiling. Their first dance was done as they passed a trumpet player while walking down Royal Street.

Just wait until you see all the photos by Hannah McSwain… Your jaw is going to drop! 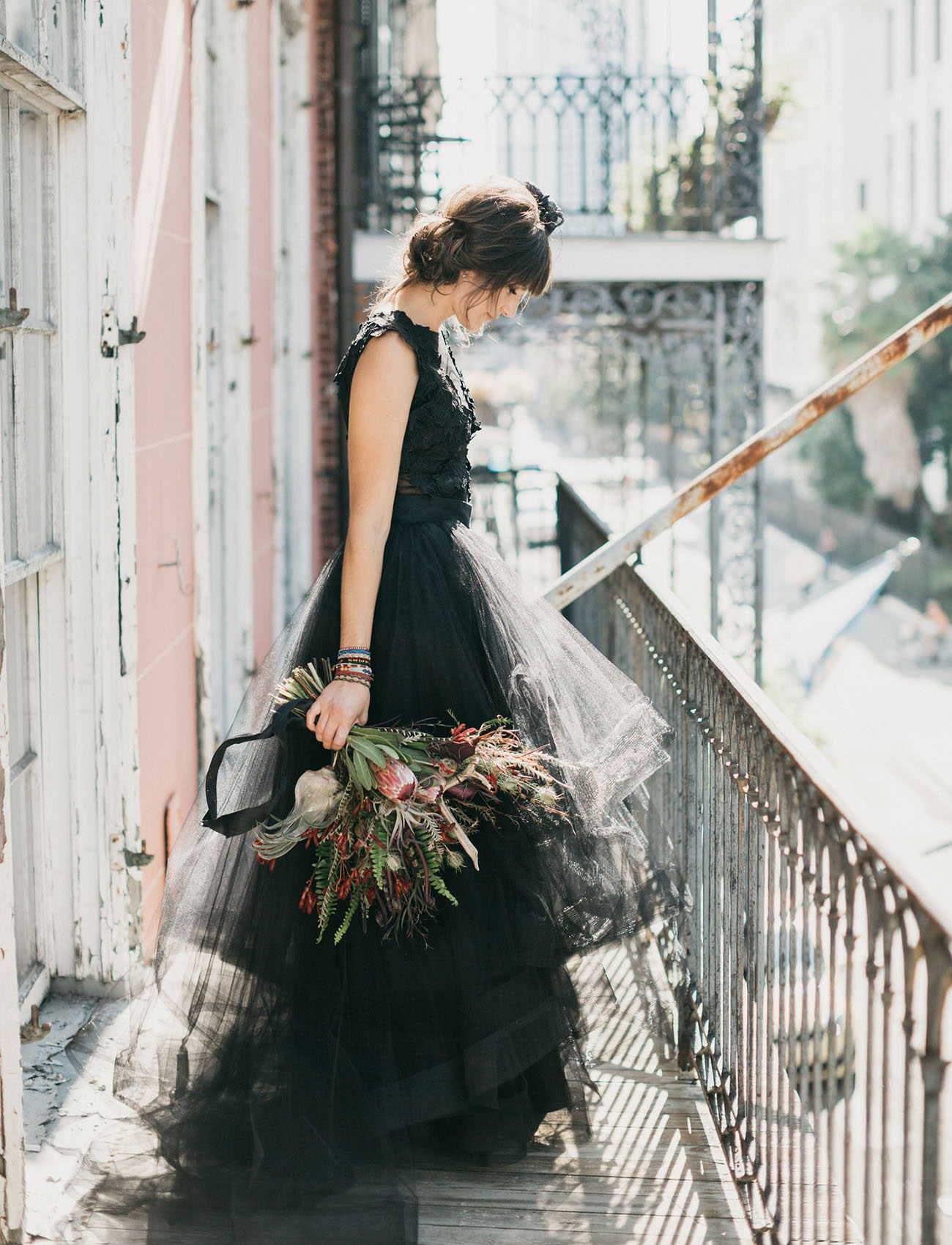 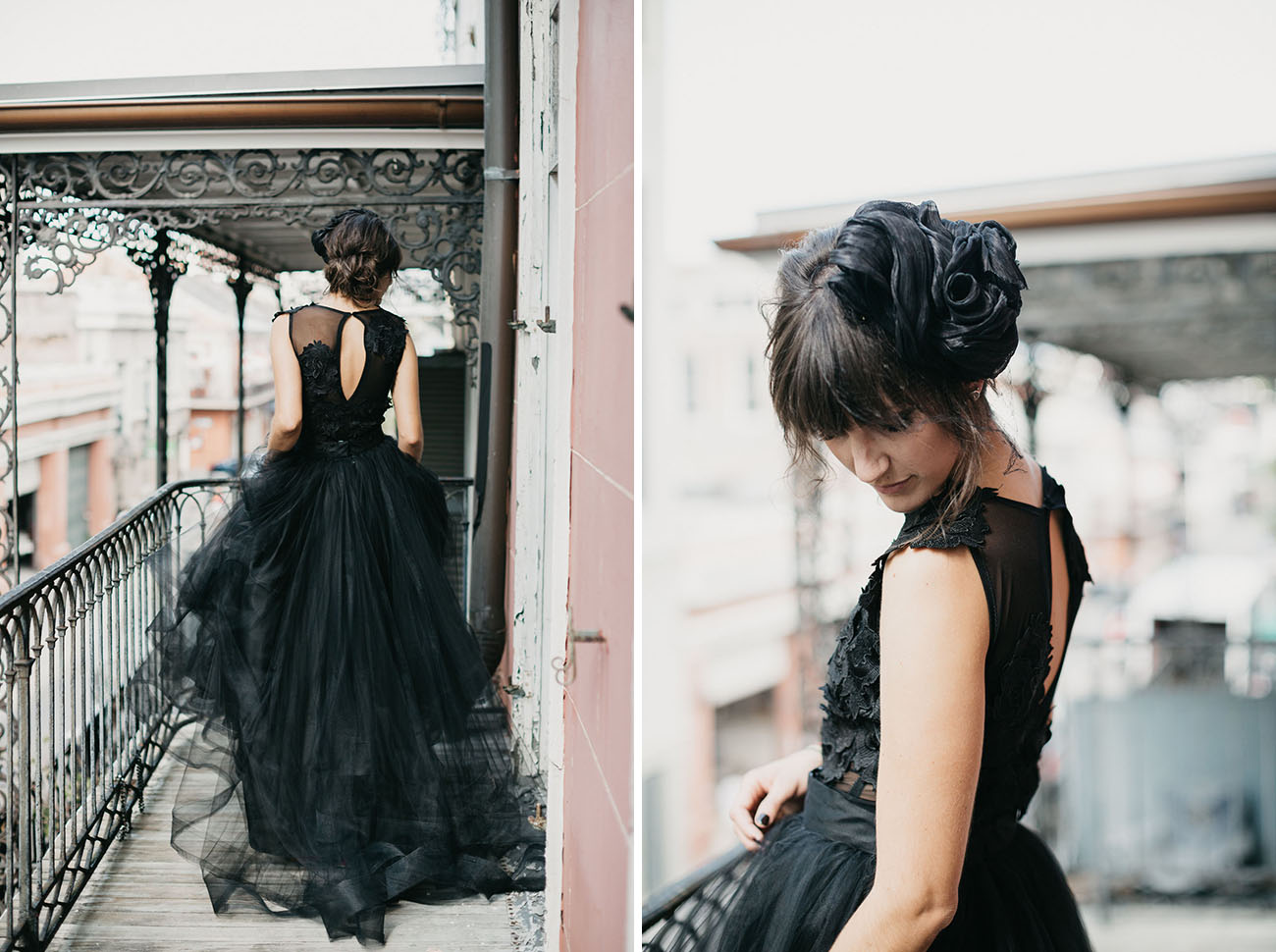 THAT DRESS! Nadia wore one incredible ensemble from Sweet Caroline.

She shares: I had always had trouble envisioning myself being married in white, because my entire life I have been happiest in black (with the occasional streak of red). When my fiancé proposed to me with a black diamond because of my “weirdness,” we evidently had a running theme. Luckily he also looks rather dashing in black! I fell in love with that ethereal dress by Sweet Caroline Styles on Etsy, and in response chose a black diamond embedded in meteorite and whisky barrel for his ring. 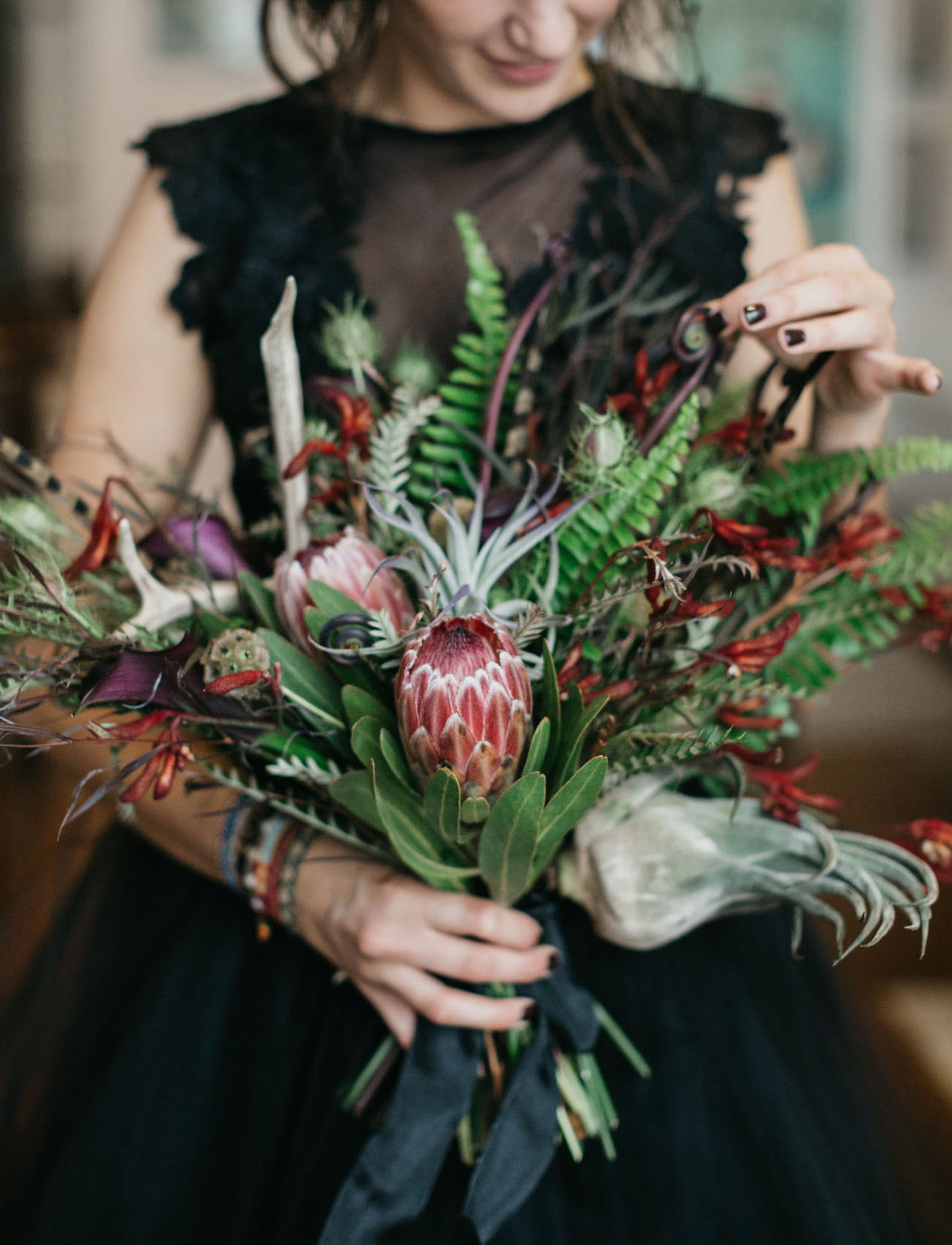 Pick-a-Petal helped us craft a bouquet that was perfectly us… He’s South African, so I included red Proteas in my bouquet, some red Kangaroo Paws for my Australia, and a deer antler for the USA where we tied the knot. 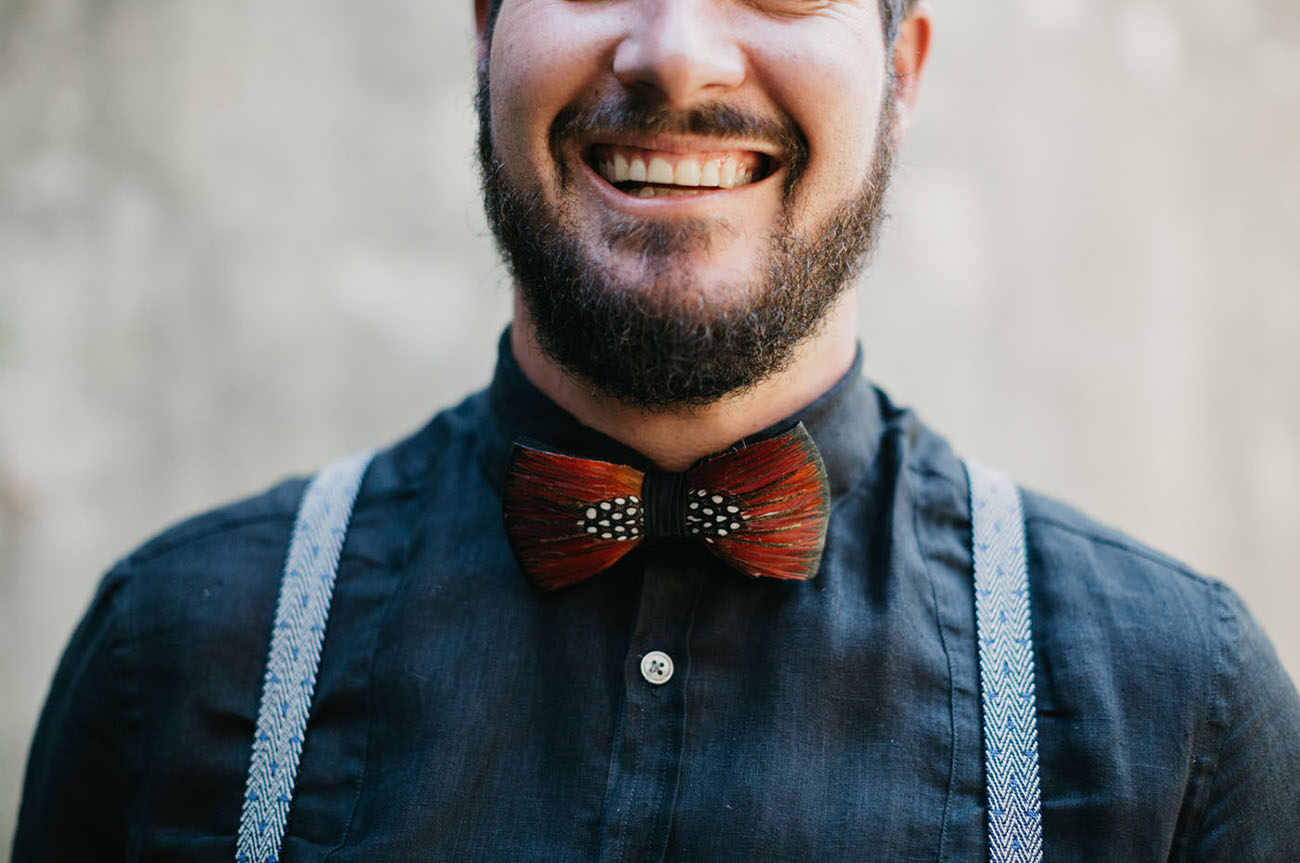 Sern’s so clever — he knew that Nadia’s shoe would be bright red and found a red bowtie from Brackish Bowties with guinea fowl feathers. 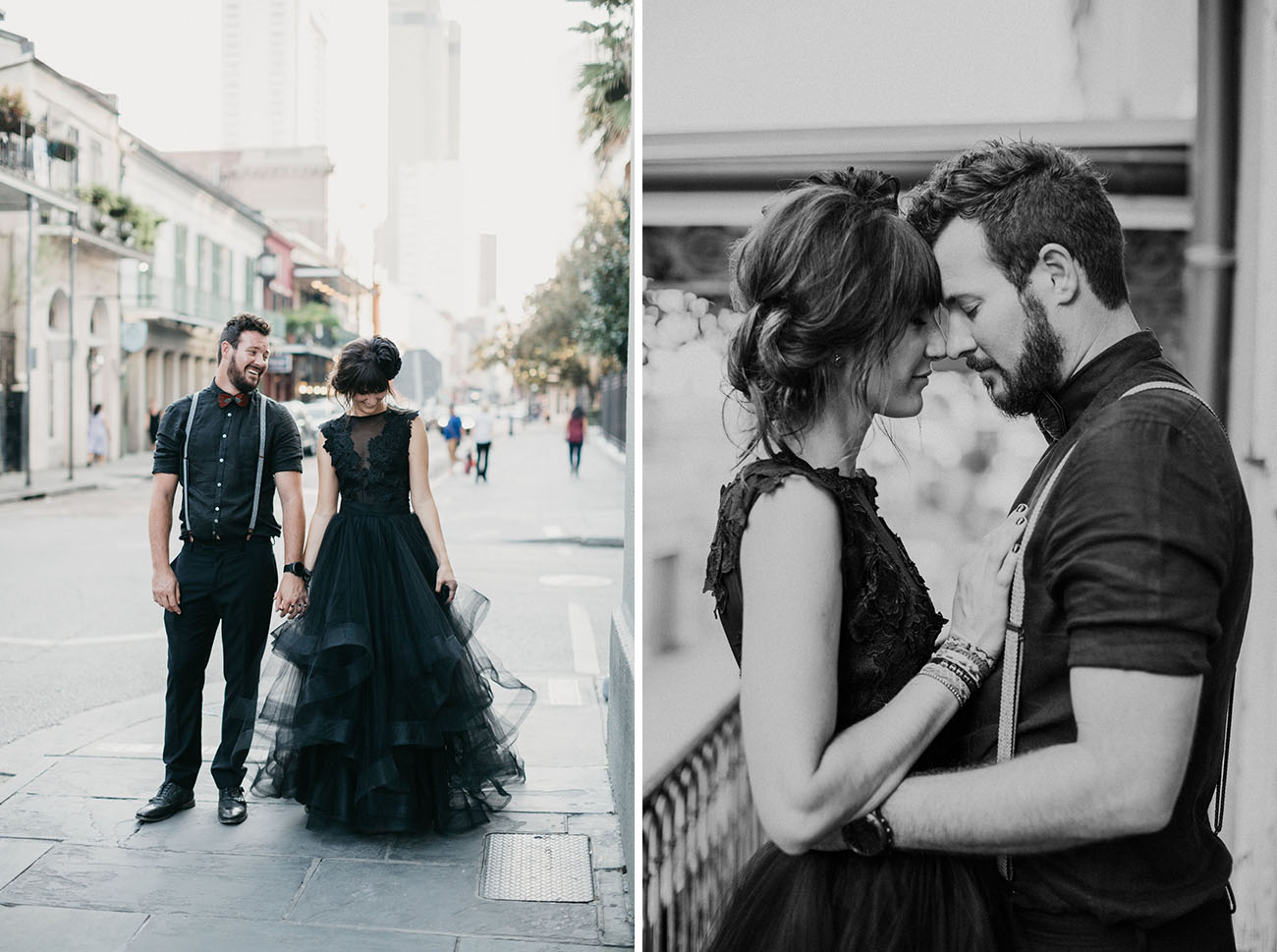 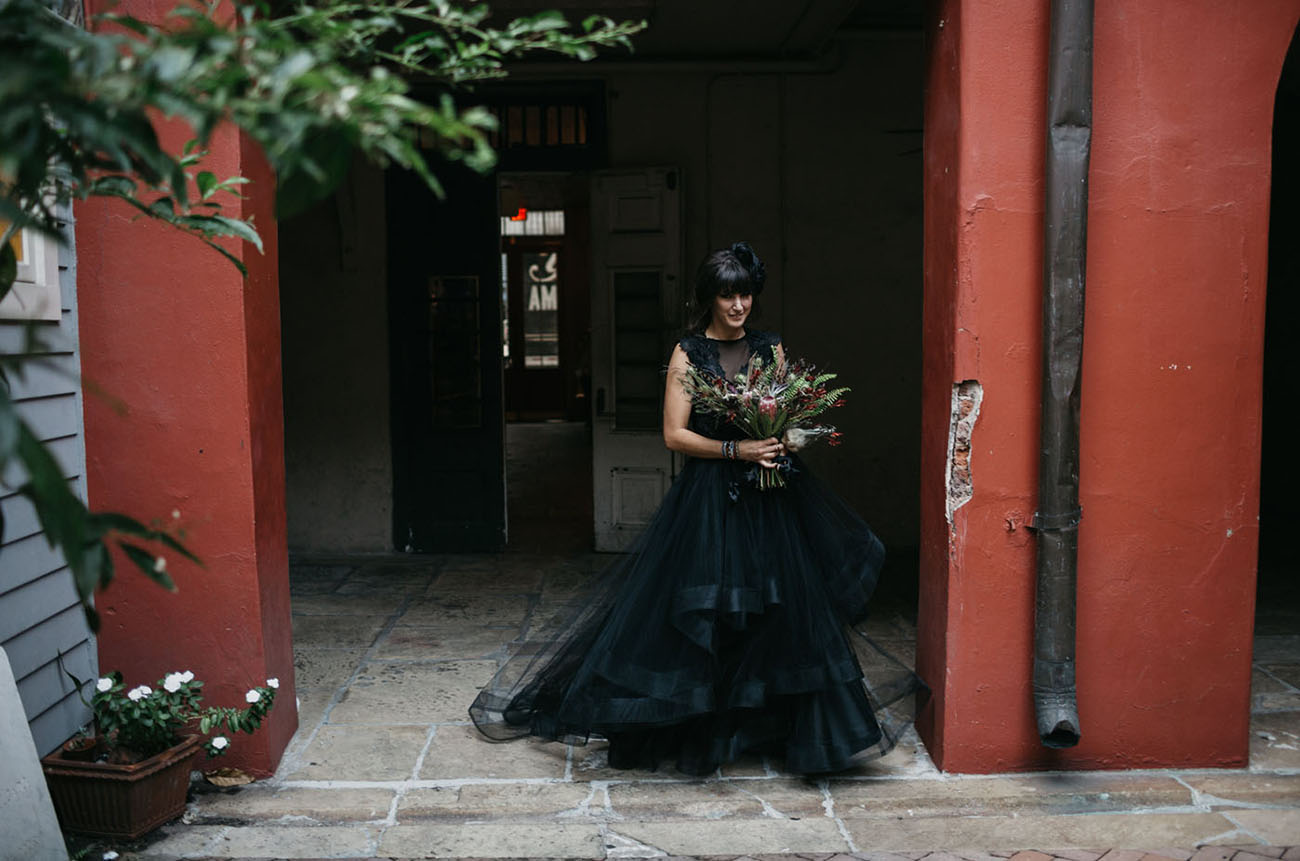 Processional: Jackie And Wilson by Hozier, a song we both adore by an artist we discovered together.

Recessional: A playlist created by the best man & maid of honor, who asked all of our friends via online to contribute music that reminded them of us.

First Dance: Passing a lone trumpet player casually leaning on the dimly-lit sidewalk, the best man thought fast and asked him for a tune. He suggested 'something New Orleans?' and proceeded with a sultry solo. We did indeed dance. We still don't know what the song was. Standing in front of my man and our celebrant, flooded with the relief of finality and dying of laughter at his barely contained tears after I myself had just spent three hours trying not to have a heart attack. 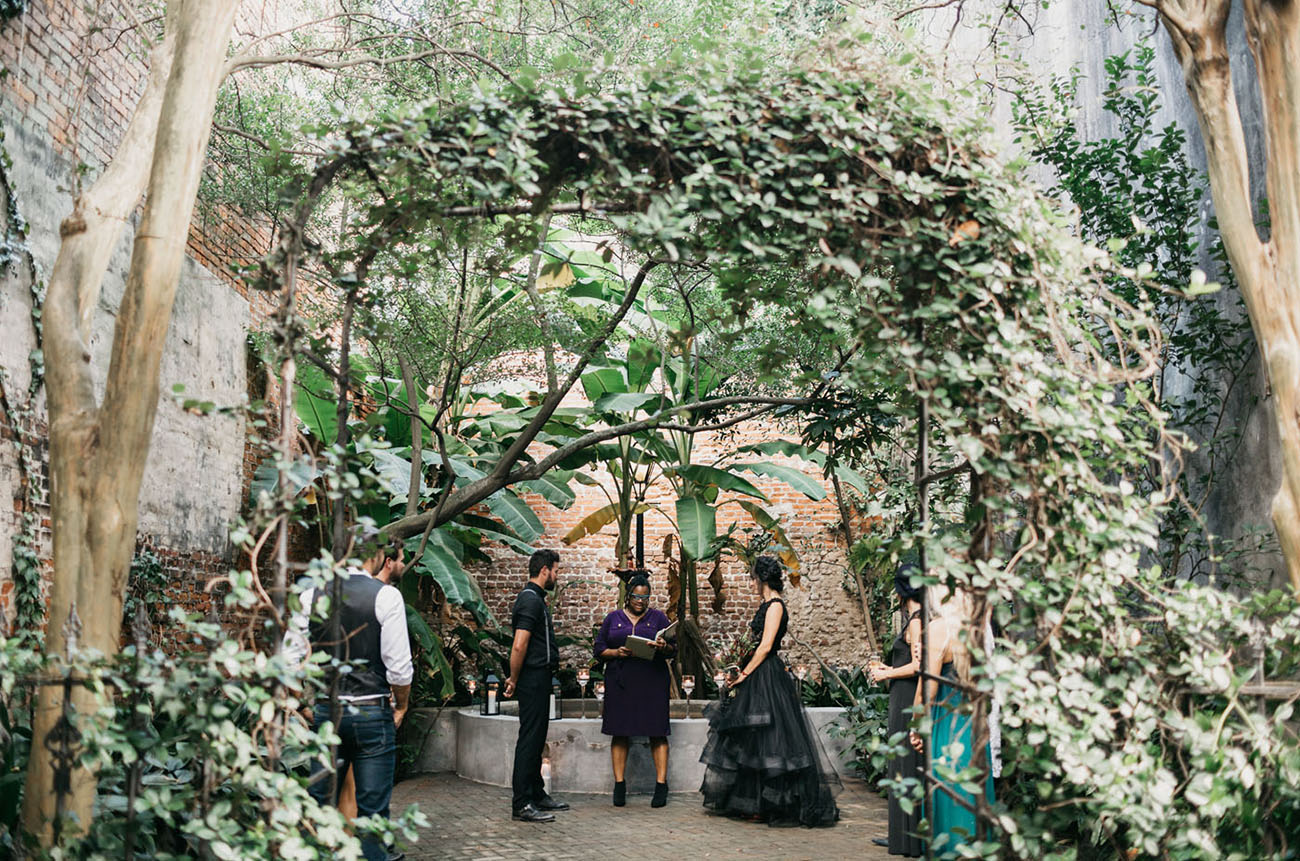 The ceremony by the gorgeous LaToya of Waning Moon was brief, funny, joyful and non-religious (just like us!), and our reading was a bittersweet poem I wrote a couple of years ago when we were about to be separated by sea for work. 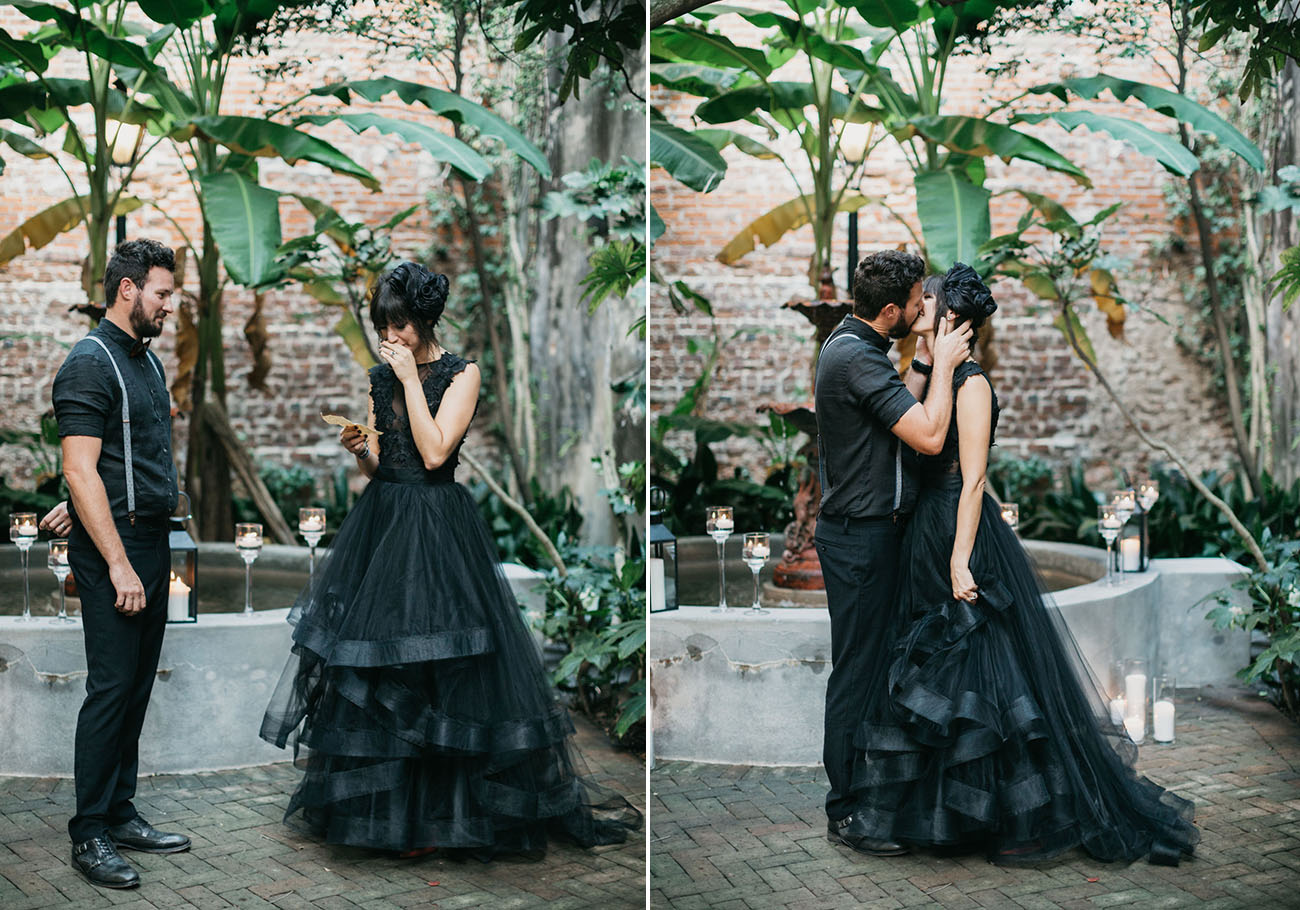 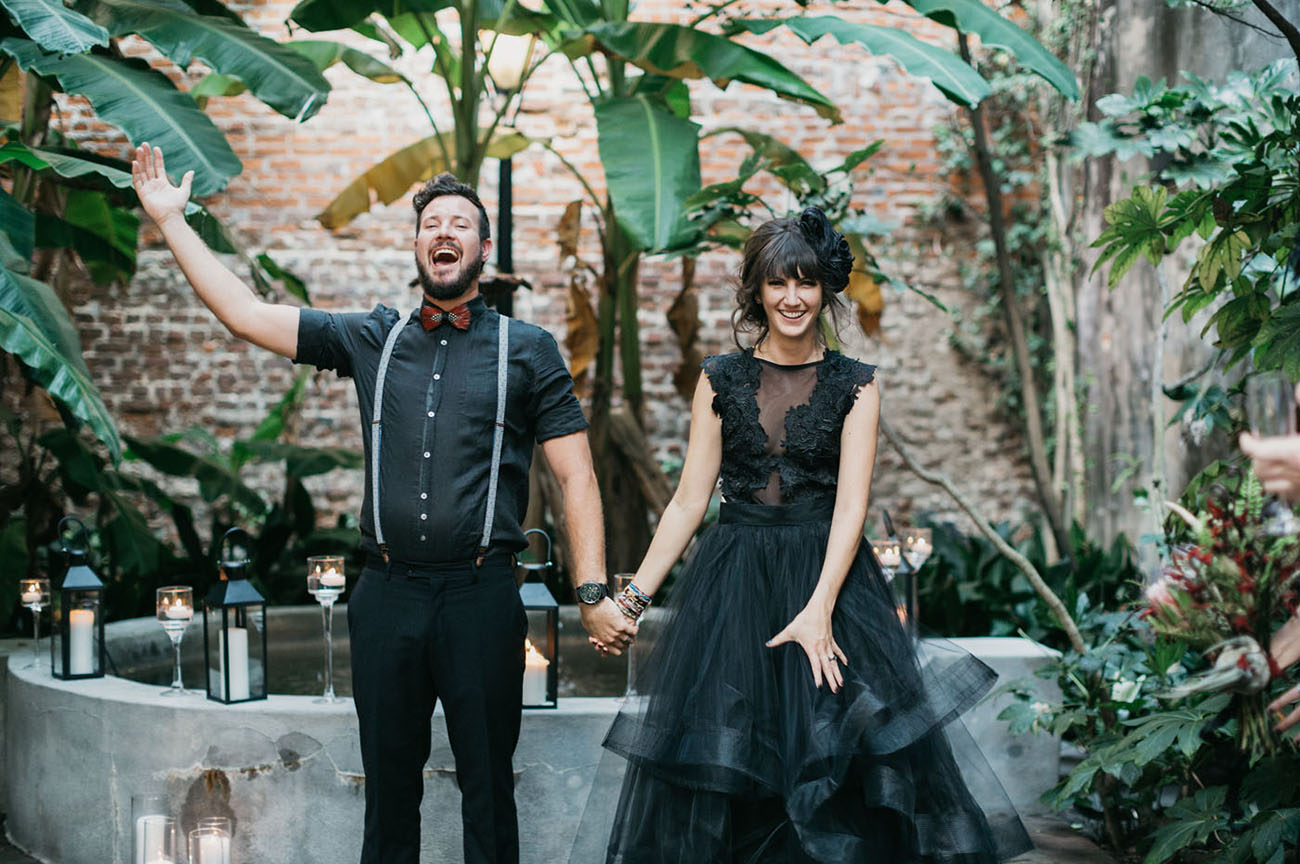 As for Nadia’s epic headpiece that completed the dark + sultry look? It was crafted by her MOH, Alicia of Tattered Gossamer, out of banana fiber headpieces. 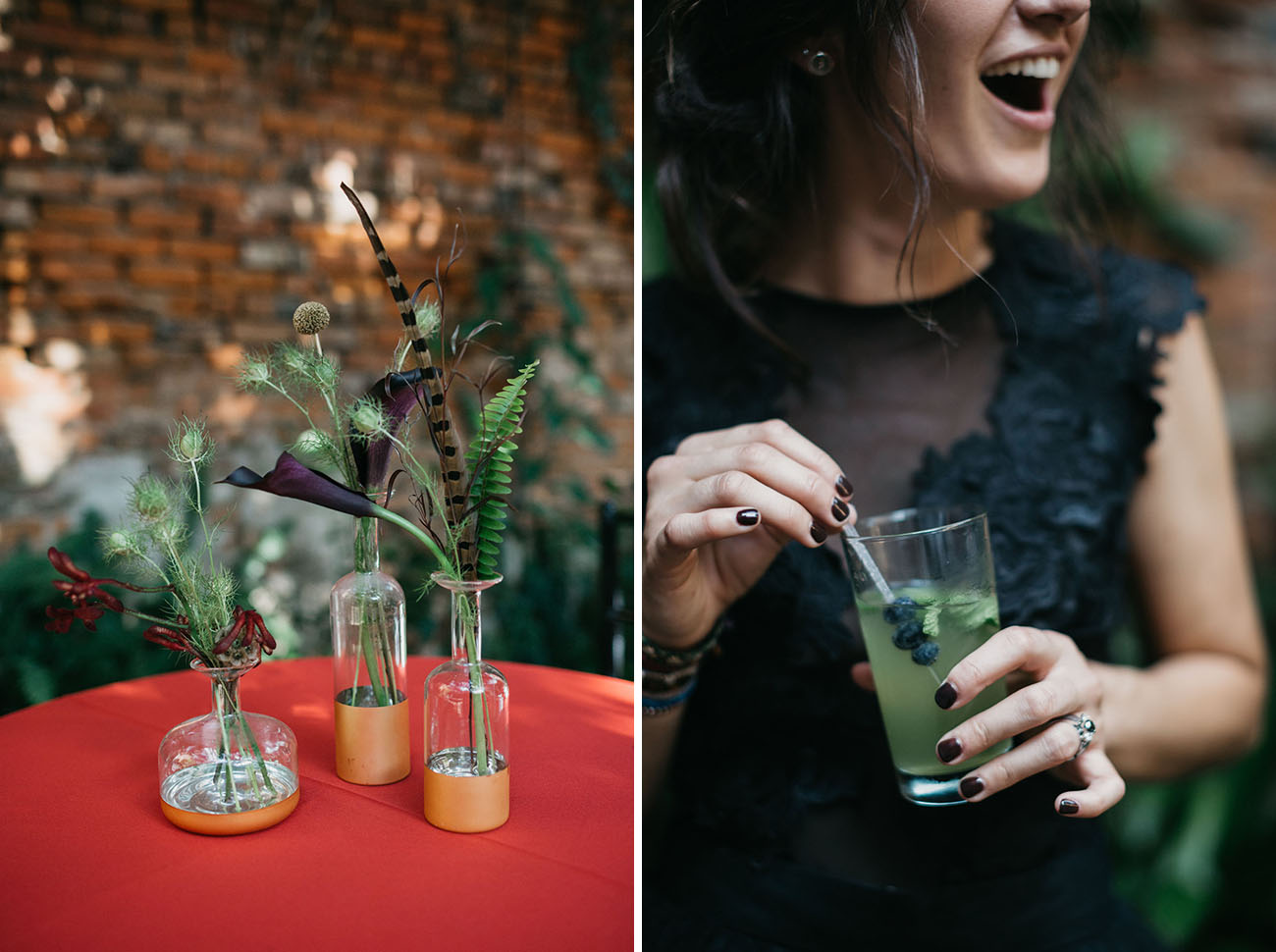 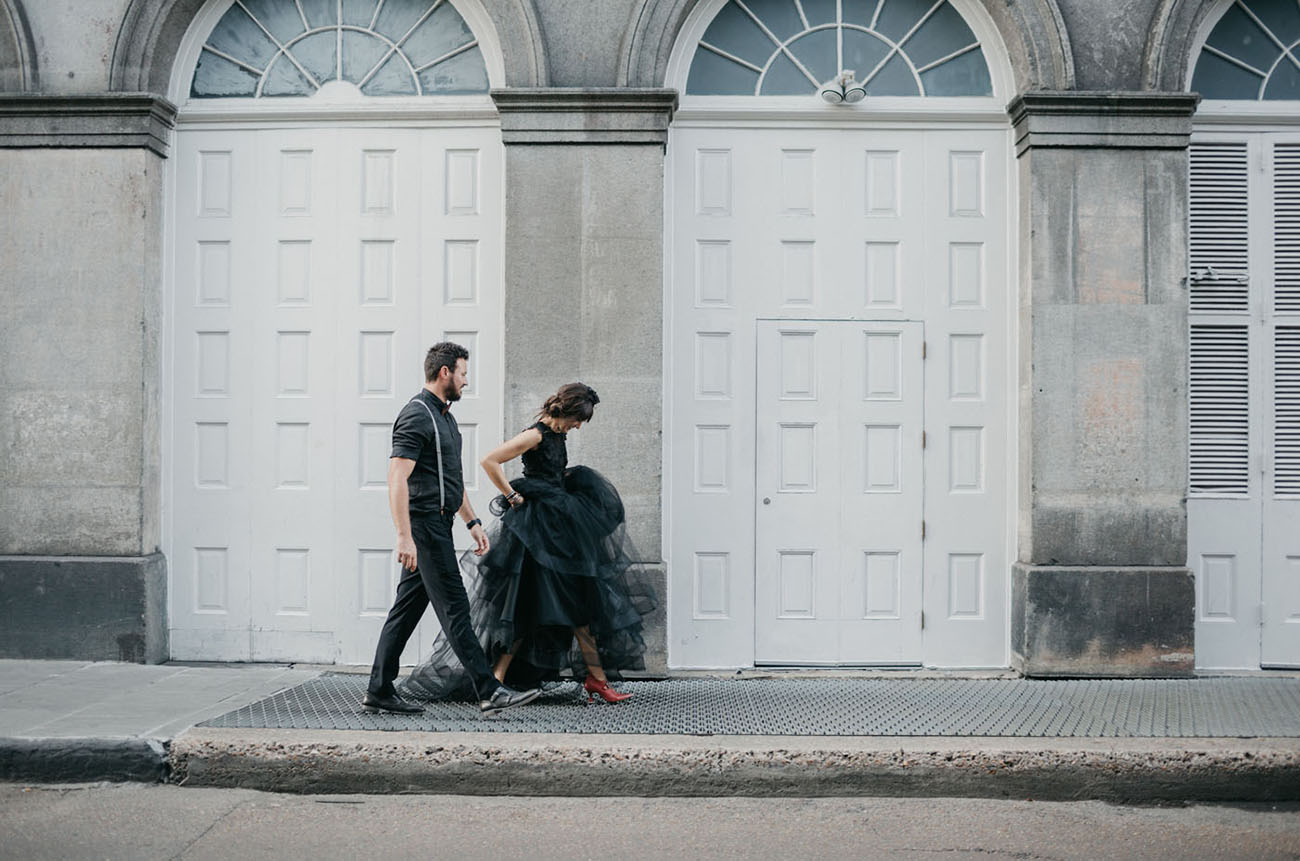 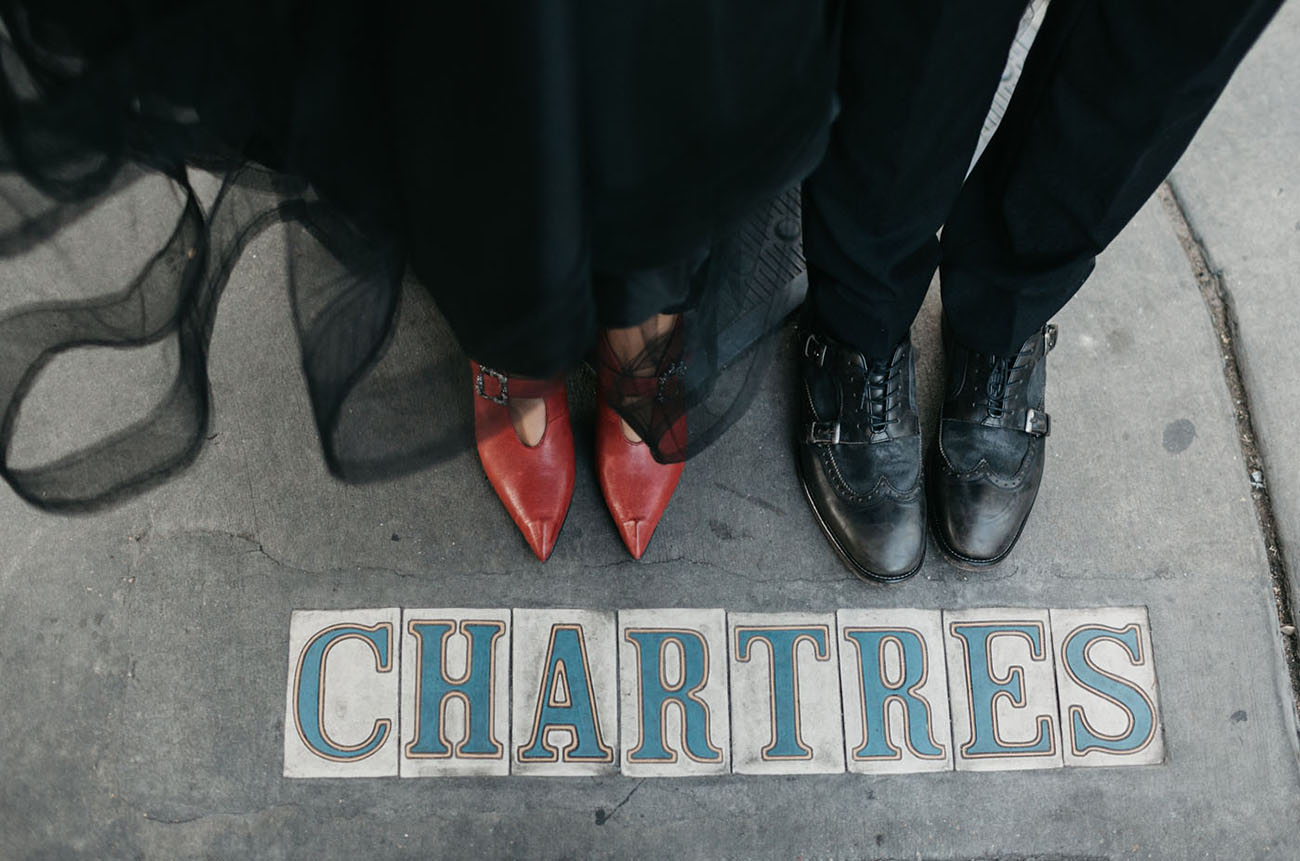 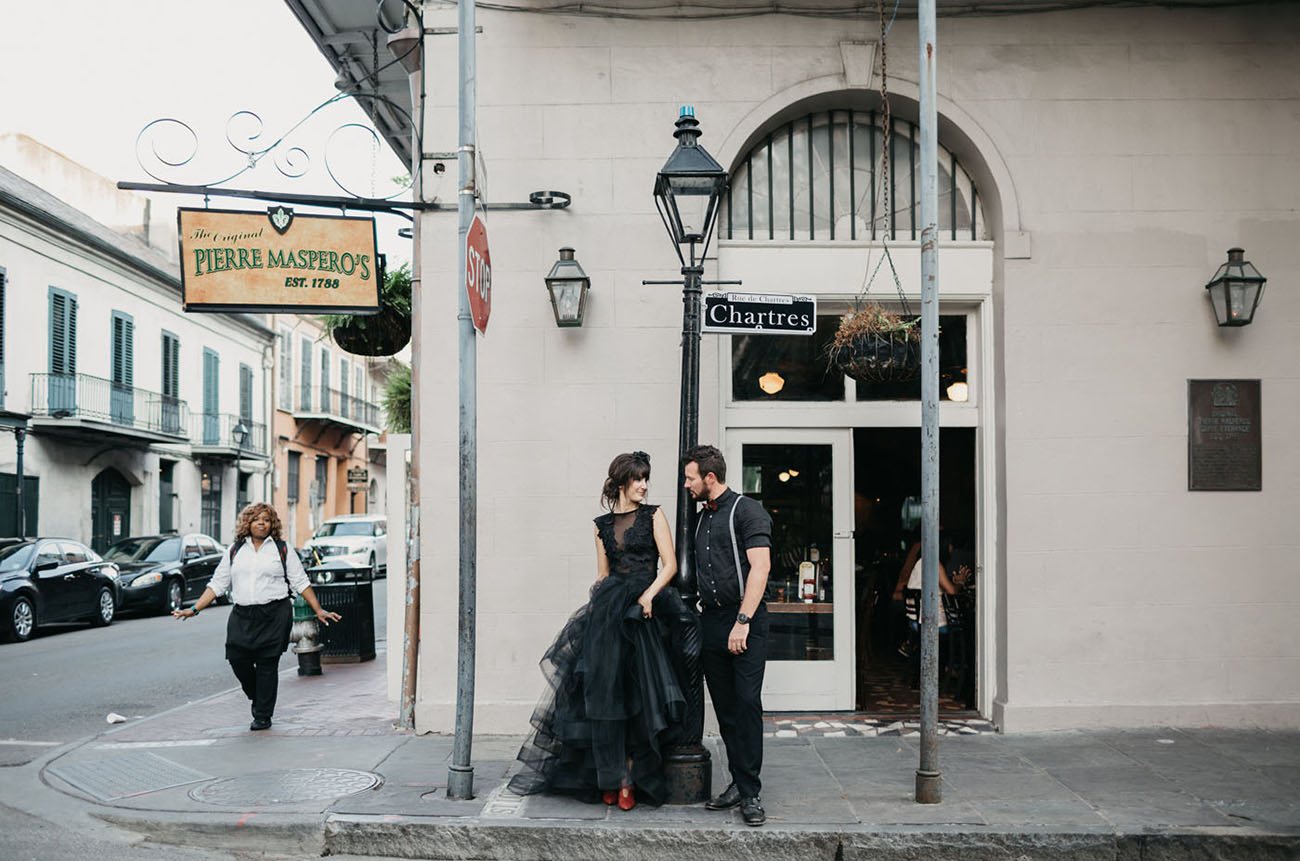 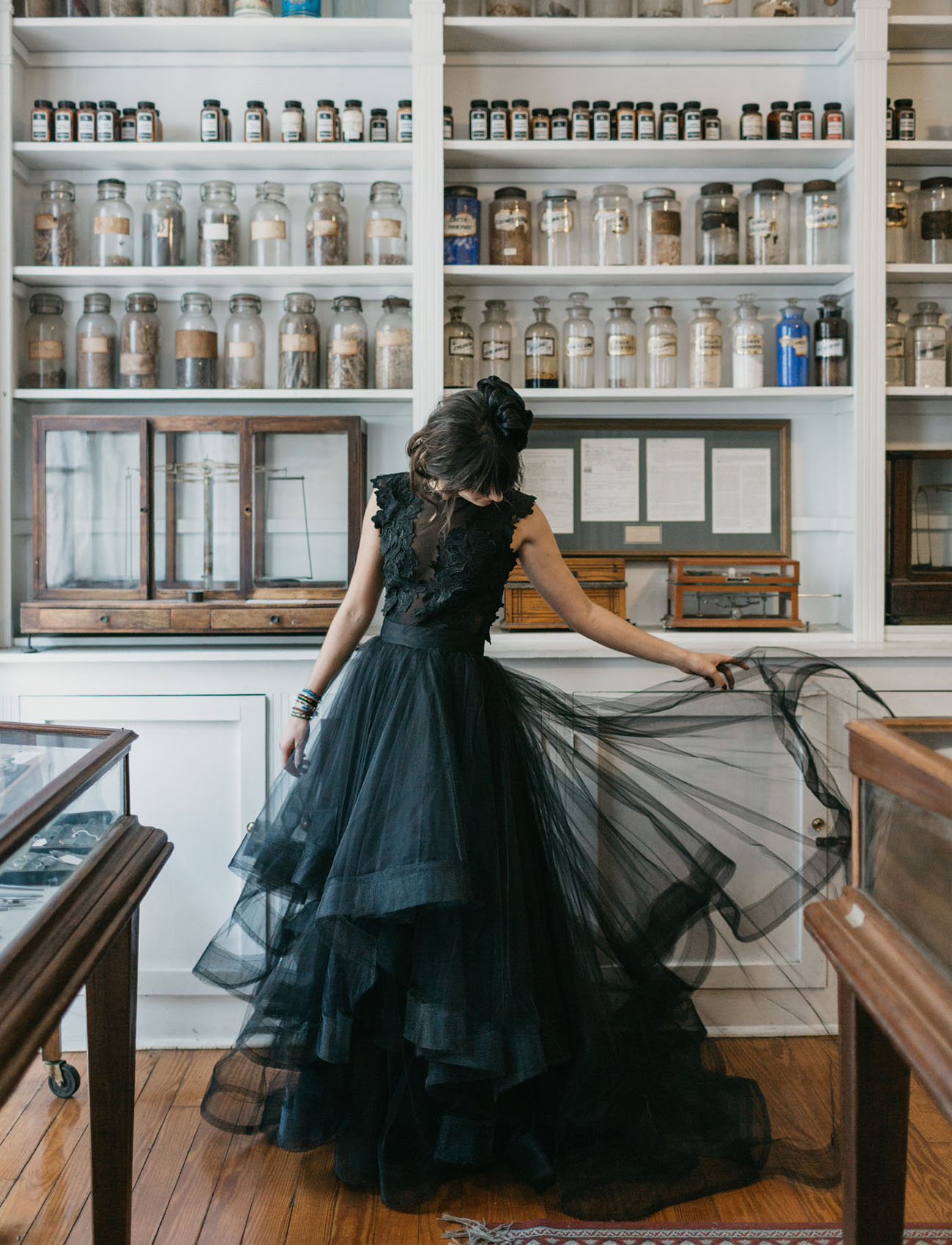 Fun Fact: The Pharmacy Museum in New Orleans has some pretty cool history… Louis J. Dufilho, Jr., fondly known as America’s First Licensed Pharmacist, made his major contribution to the field of pharmacy in 1816 in New Orleans. In 1804, the State of Louisiana, mandated that a licensing examination was required for pharmacists wishing to practice. Louis J. Dufilho, Jr. was the first to pass said licensing exam, making his pharmacy the first legitimate United States apothecary shop. 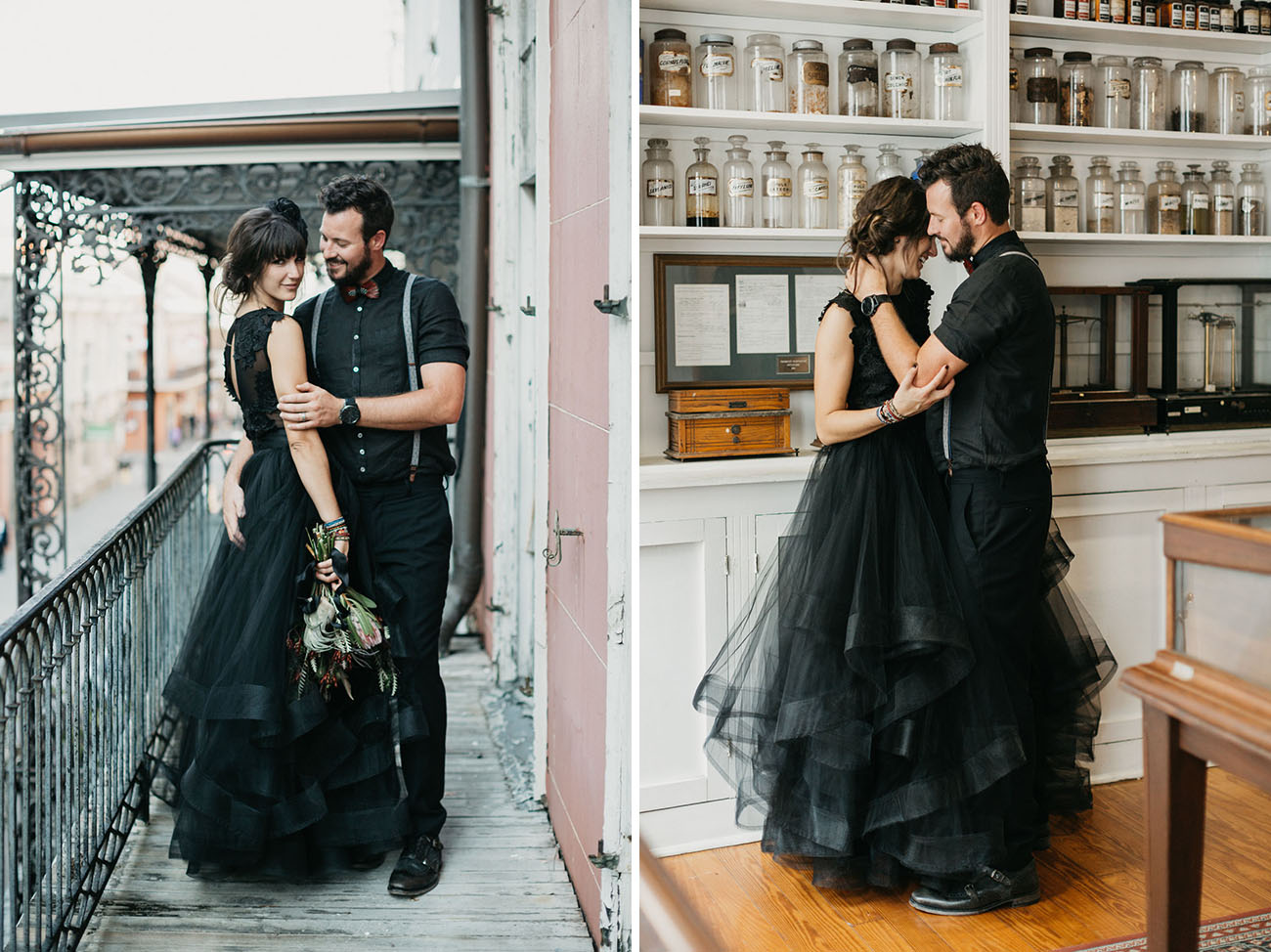 Their photographer, Hannah, shares: My advice for brides planning now is sometimes trying to have too much control over every aspect of the day can set high expectations. It’s ok to let go. It’s ok to just let things happen and to remember that you don’t have to play by anyone’s rules but your own. If you want to wear black, wear black. If you want only a handful of people there, do it.

To top it all off: As Sern’s not one for sweets, I was much more excited by the idea of a cheese tower, so we scrapped the cake thing and added oysters to be available along with my favorite champagne (discovered working aboard a yacht) throughout the ceremony.

Sounds splendid to us!! We’re in love with the way N+S made the day uniquely their own… What out-of-the-box locations do you think could be cool for an elopement ceremony?