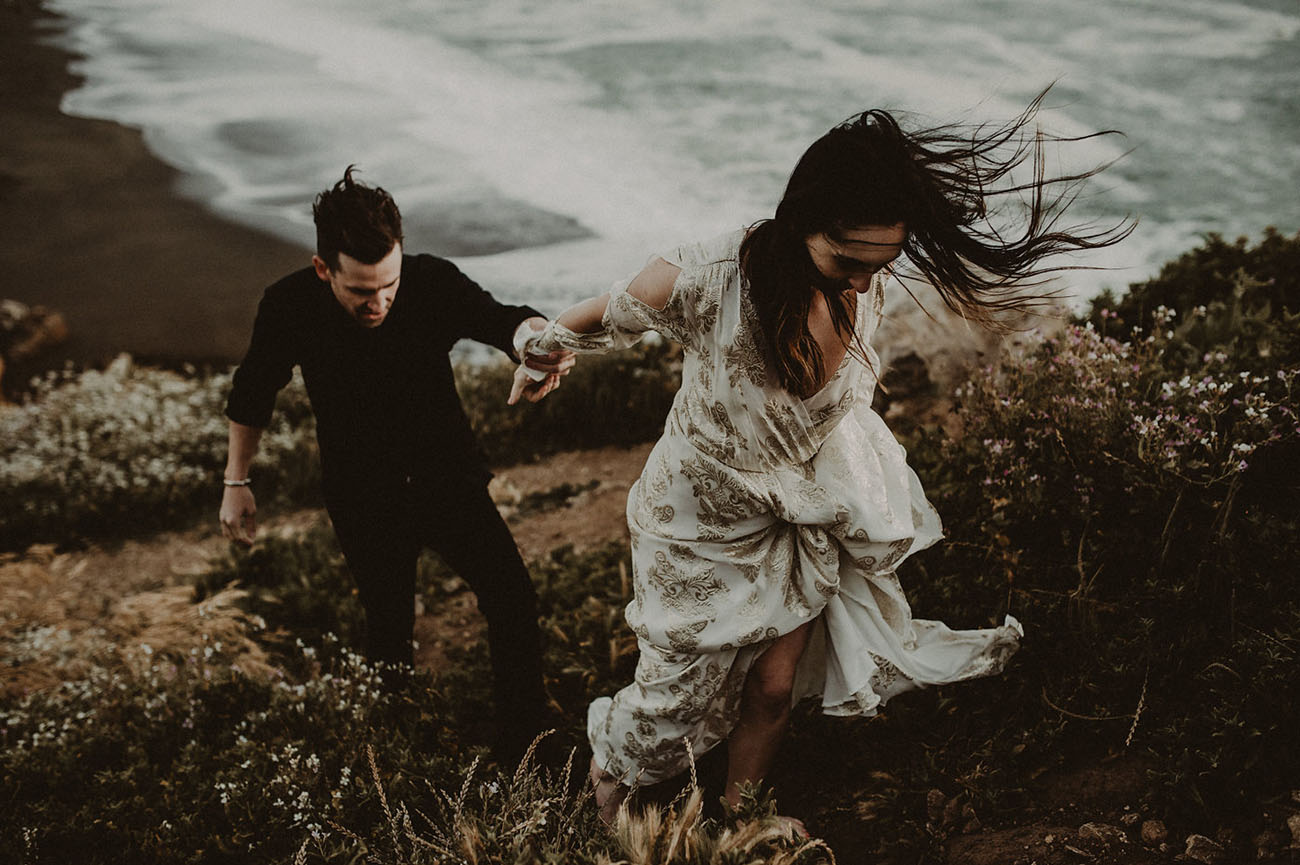 Being engaged is a magical time… A time that comes with trying out the new title of “fiancé” (and possibly resorting back to boyfriend or girlfriend, because it feels more natural), a time to plan for the future (and sometimes tell others ‘No. We don’t have a wedding date yet.’), but mostly it’s a time to embrace the present moment with the one you love. We here at GWS wholeheartedly believe that it’s an important time to capture — with photos, with memories, with sweet notes. That way the two of you can reflect on those moments and that time period in your life in the years to come.

The moment we saw this adventurous engagement session in San Francisco, we knew we had to share! Originally from Seattle, Michaela + Sean met back in 2013. Michaela spills We met on a dating app and quickly found out that we not only lived in the same city, and same neighborhood, but on the very same street, just a block away! Since then, we’ve always called it “magnets” — drawn together in an unexplainable way.

We talked from morning till night but hadn’t met in person until a month later. The first night we met, we went to a local dive bar. He smiled at me and did this little dance to the music, a dance he does when he’s goofing off and having a blast… It put the biggest smile on my face and knocked the wind out of me. Mere days later, M called her mom saying she’d met her match. We’ll share the rest of their sweet story below in the photos captured by The Moody Romantic! 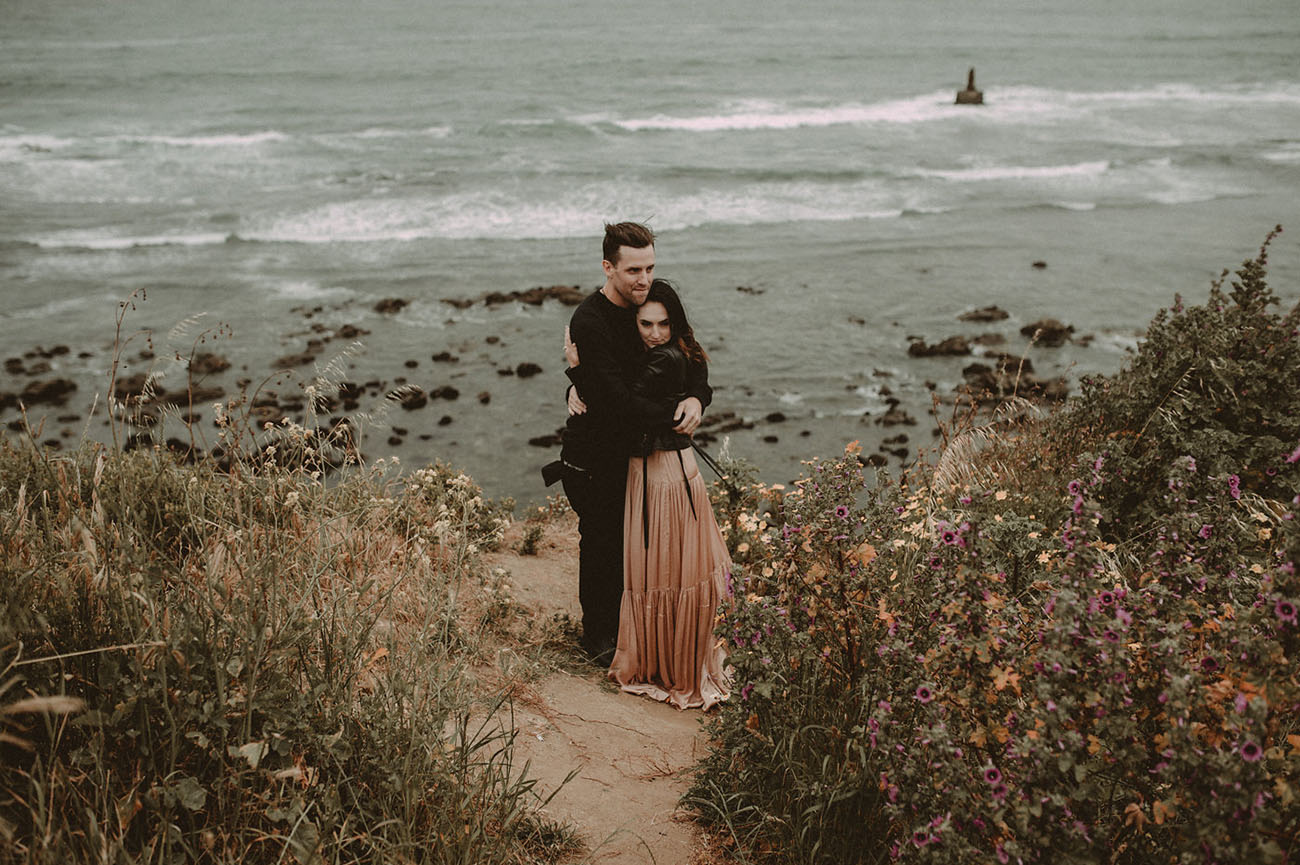 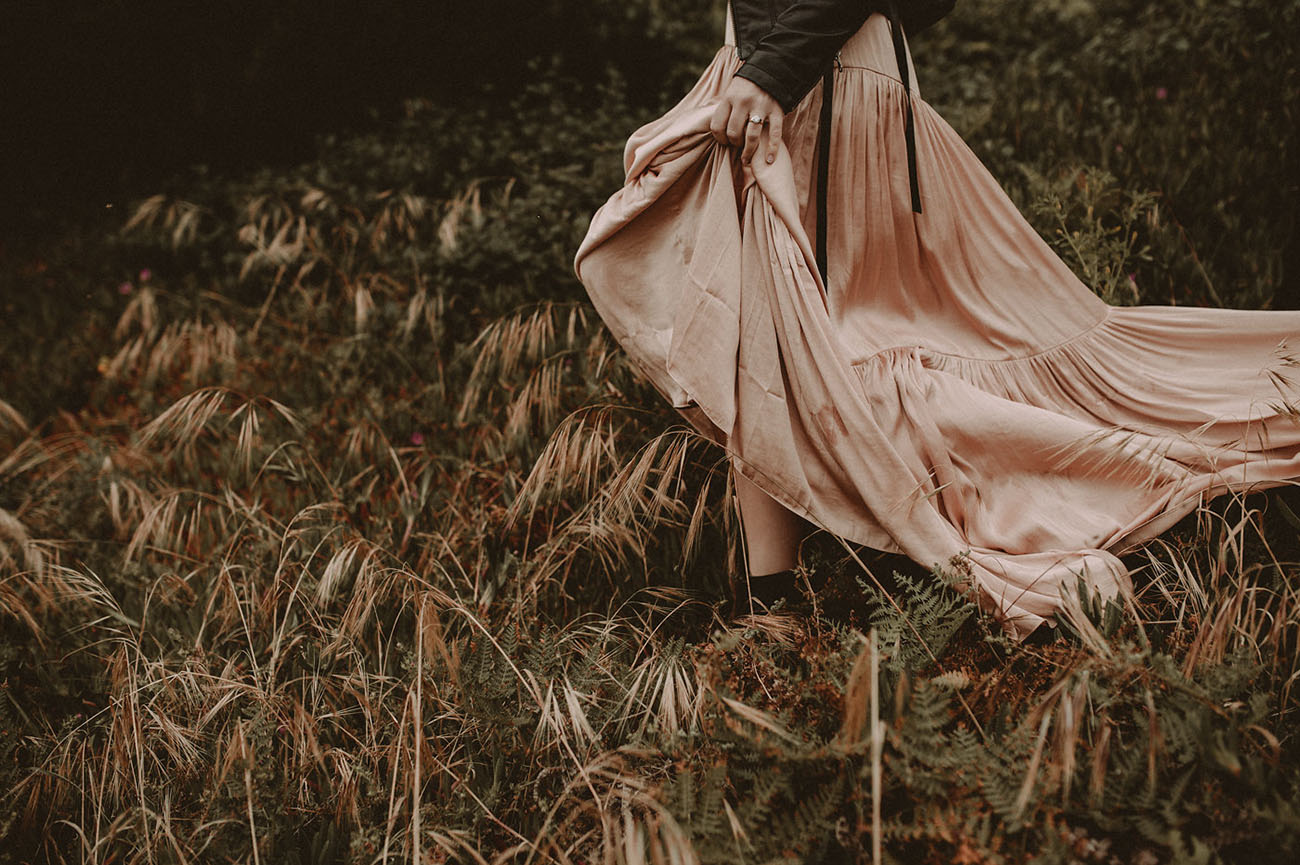 Michaela’s first dusty rose dress is by Free People. One tip we like to give to all our readers — when taking engagement photos, wear something you feel AMAZING in. If you feel comfortable + confident, it will show in pictures and make them all the more magical. 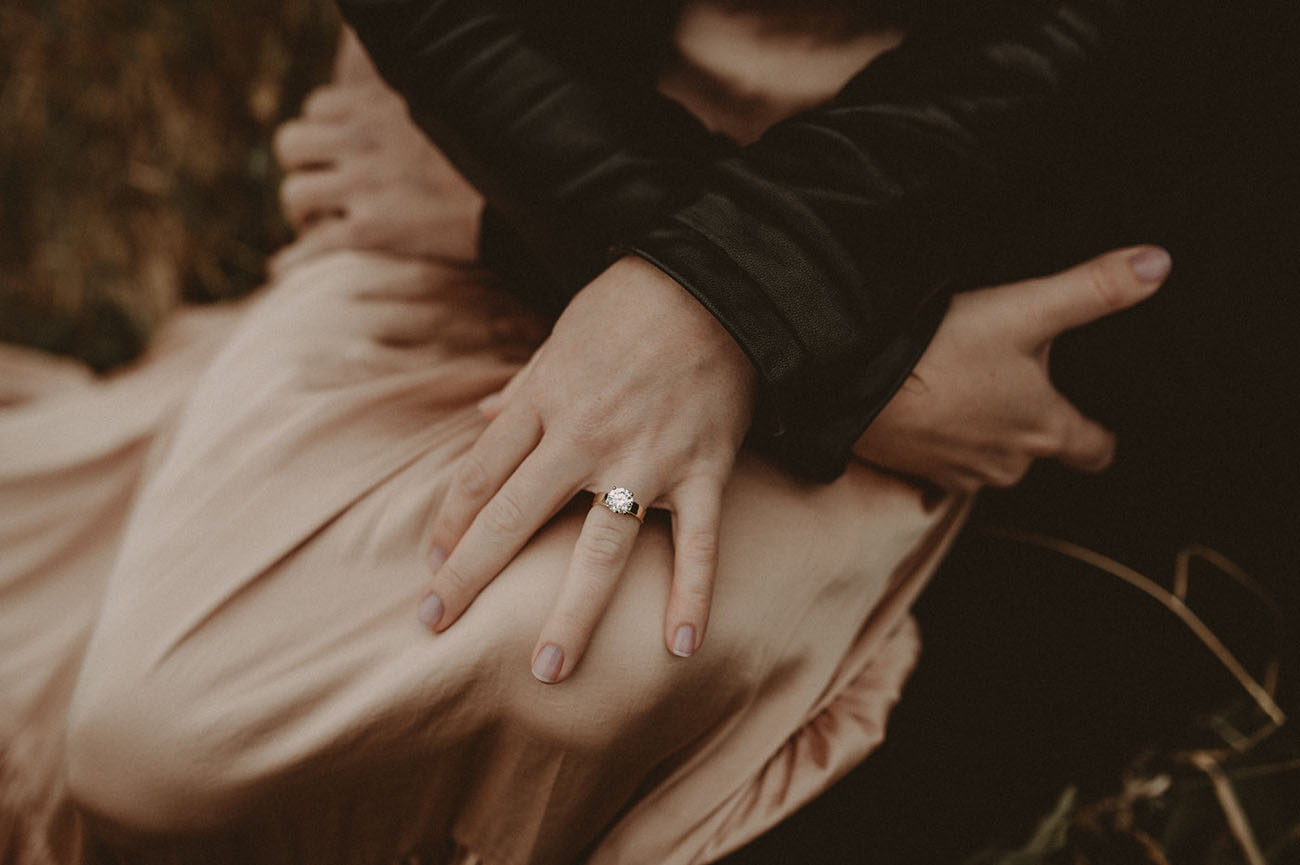 Isn’t that a STUNNER?! Michaela spills a little about the proposal: Last December we went to New York City for our annual pre-holiday trip. I cried the first time Sean took me to NYC. We returned to the Rockefeller Christmas Tree I first saw three years ago and as we stood on the side watching the ice skating, Sean asked, “Are you ready?” Confused and not understanding what he meant, I didn’t know what to think… He got down on his knee and and asked me to marry him! We complete each other and cannot wait to start our new adventure into marriage. Dig Michaela’s style as much as us? Here are a few of our favorite dresses to wear to your own engagement session! 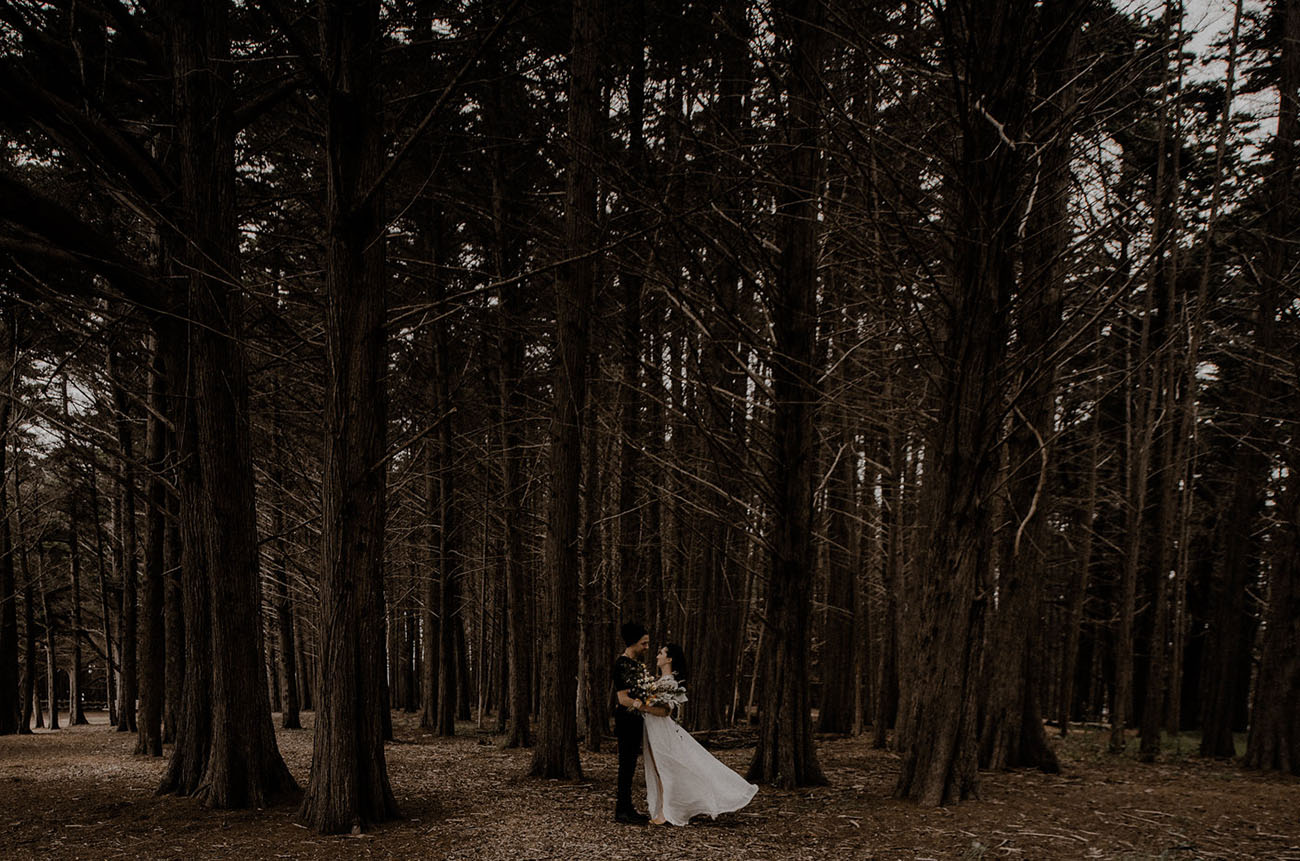 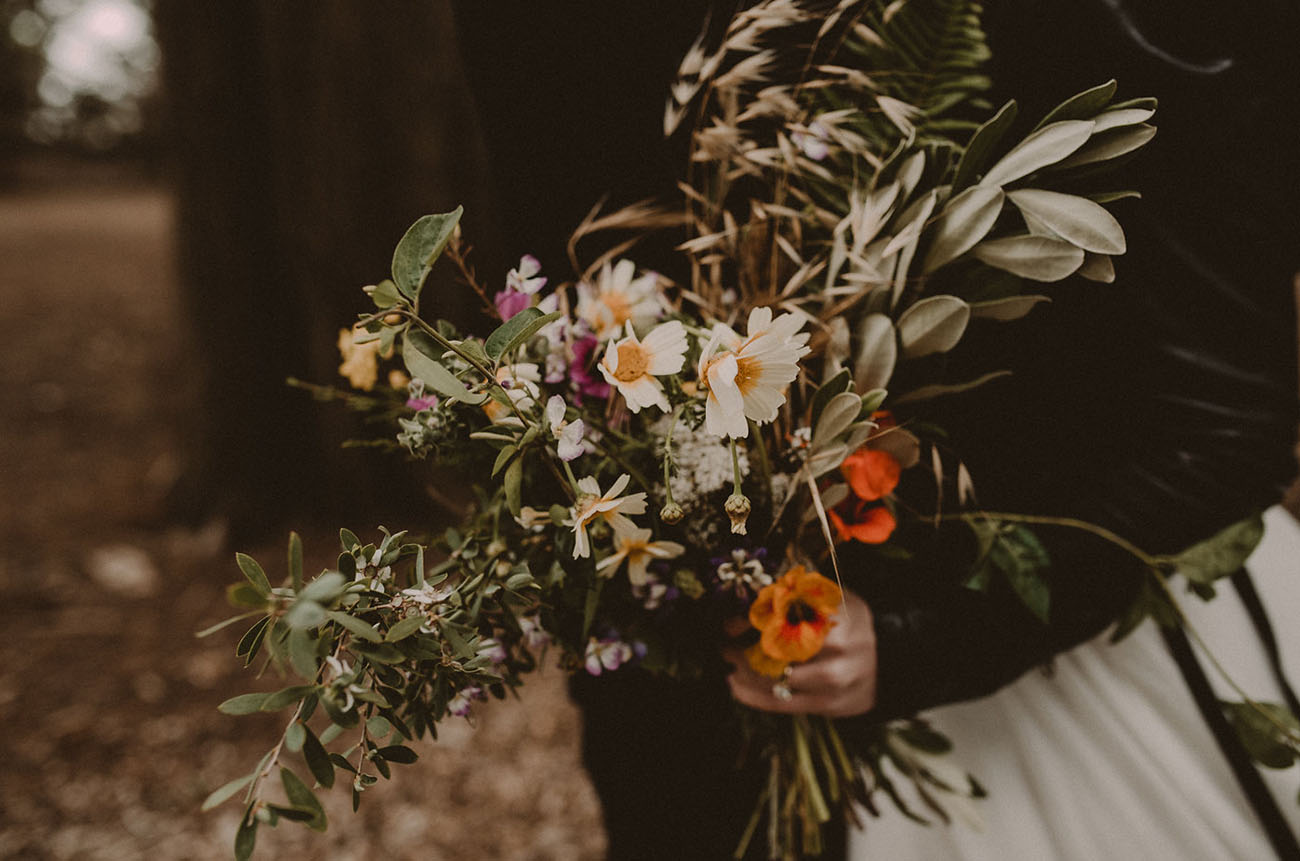 Tip two: Florals always make for a fun prop! Whether it’s a flower crown, a bouquet, or perhaps a circle of petals/used as a backdrop… We’re particularly fond of these posies put together by Yellow Thistle Designs! 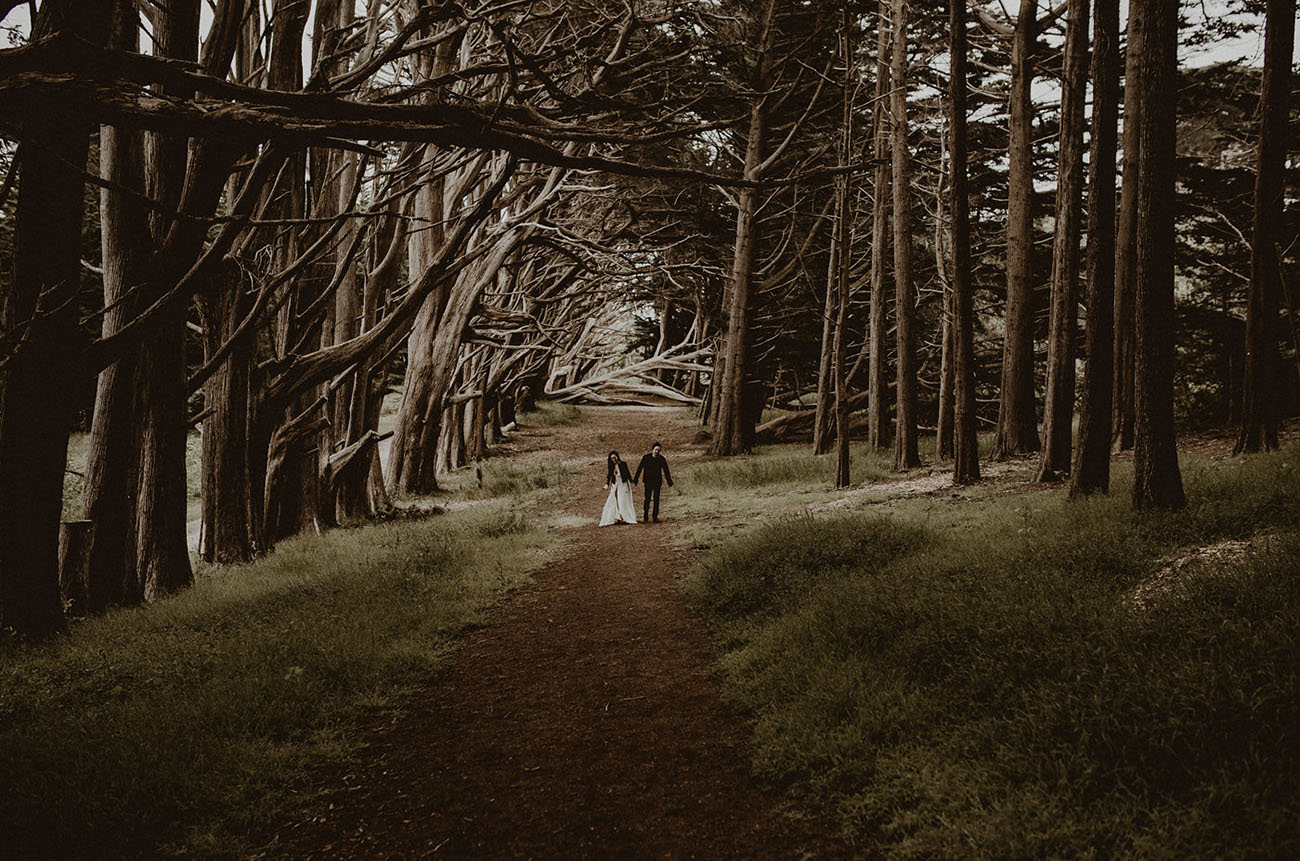 I’m not sure I believe in love at first sight or soul mates but something happened when we met. It was so easy to let the walls fall down, to be ourselves all the time… From the goofy side to the serious side, we just felt comfortable through it all. After spending an entire weekend together I called my mom and said “he’s it.” 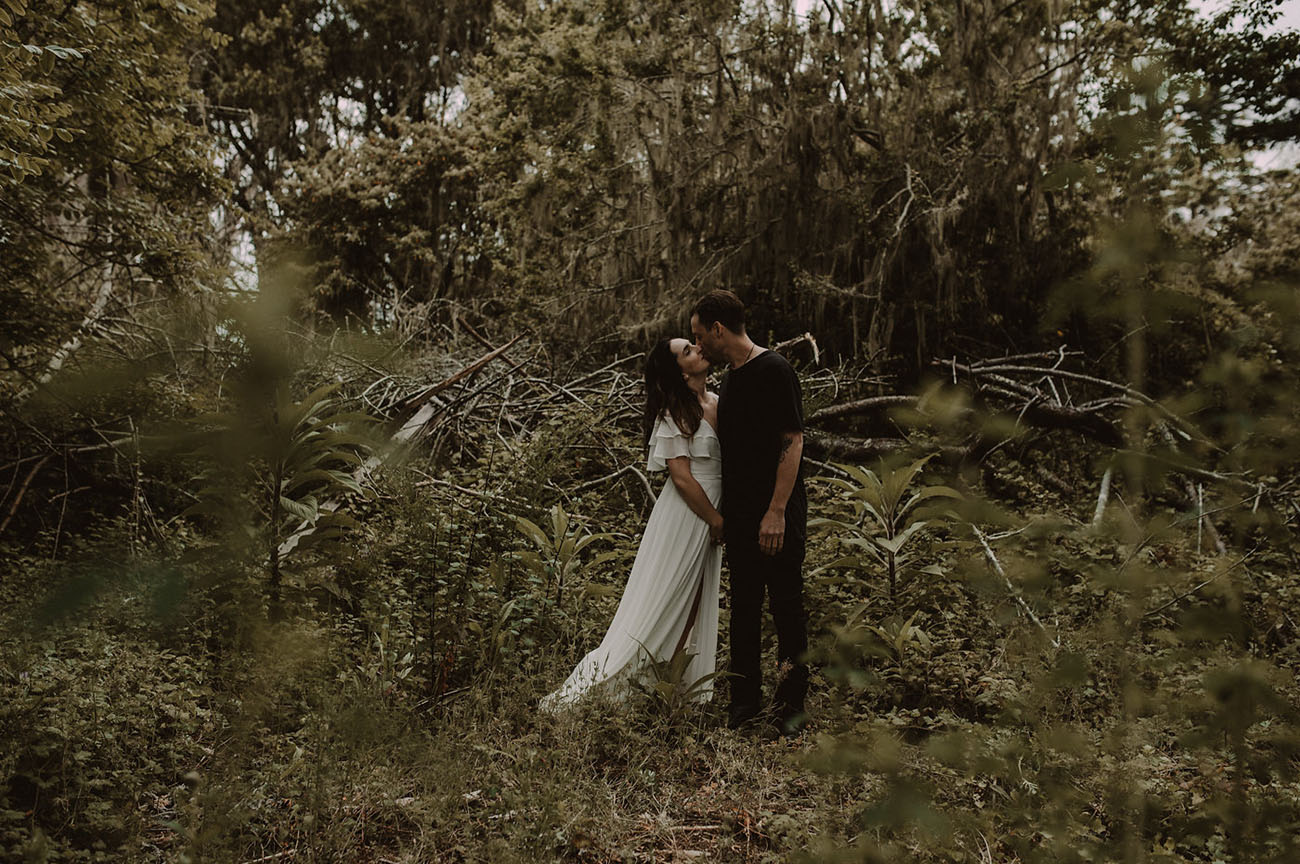 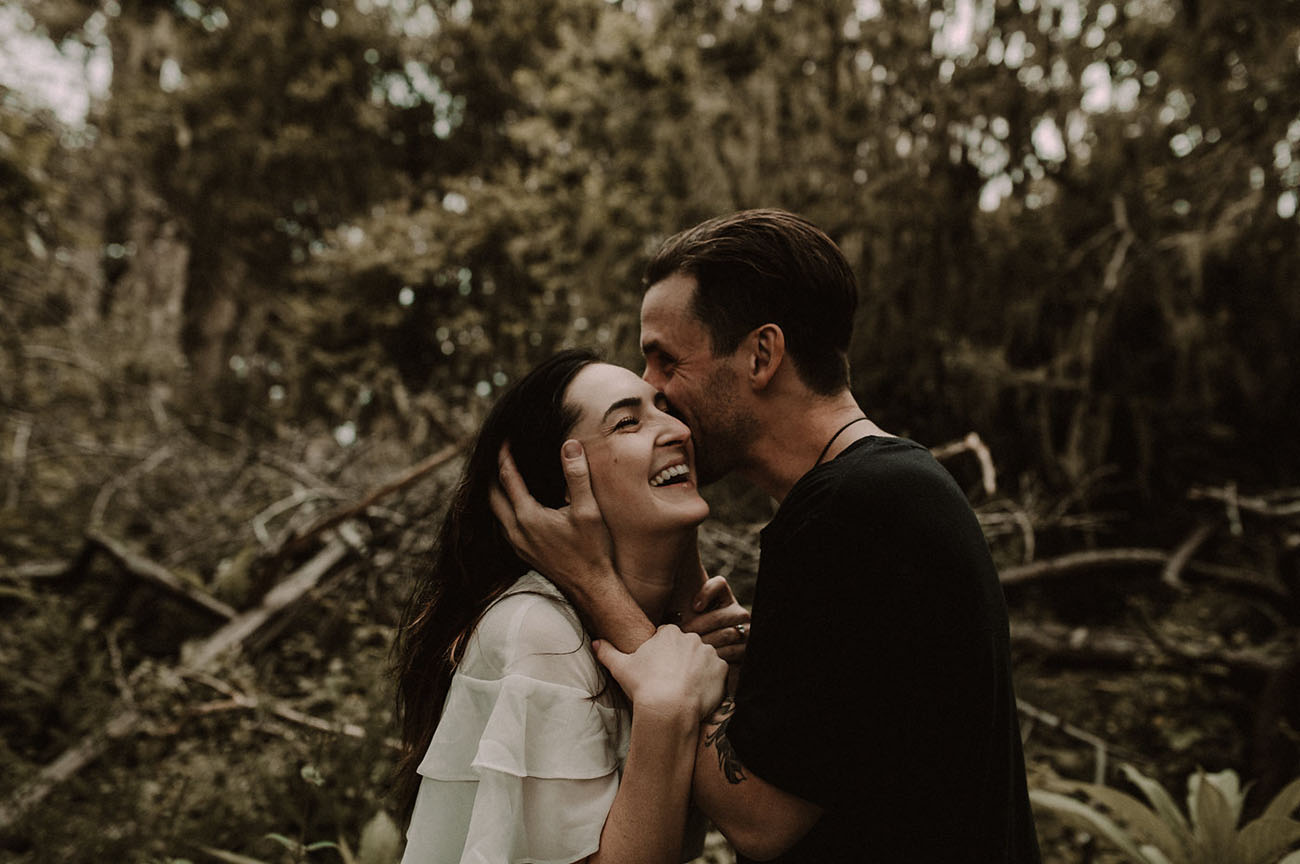 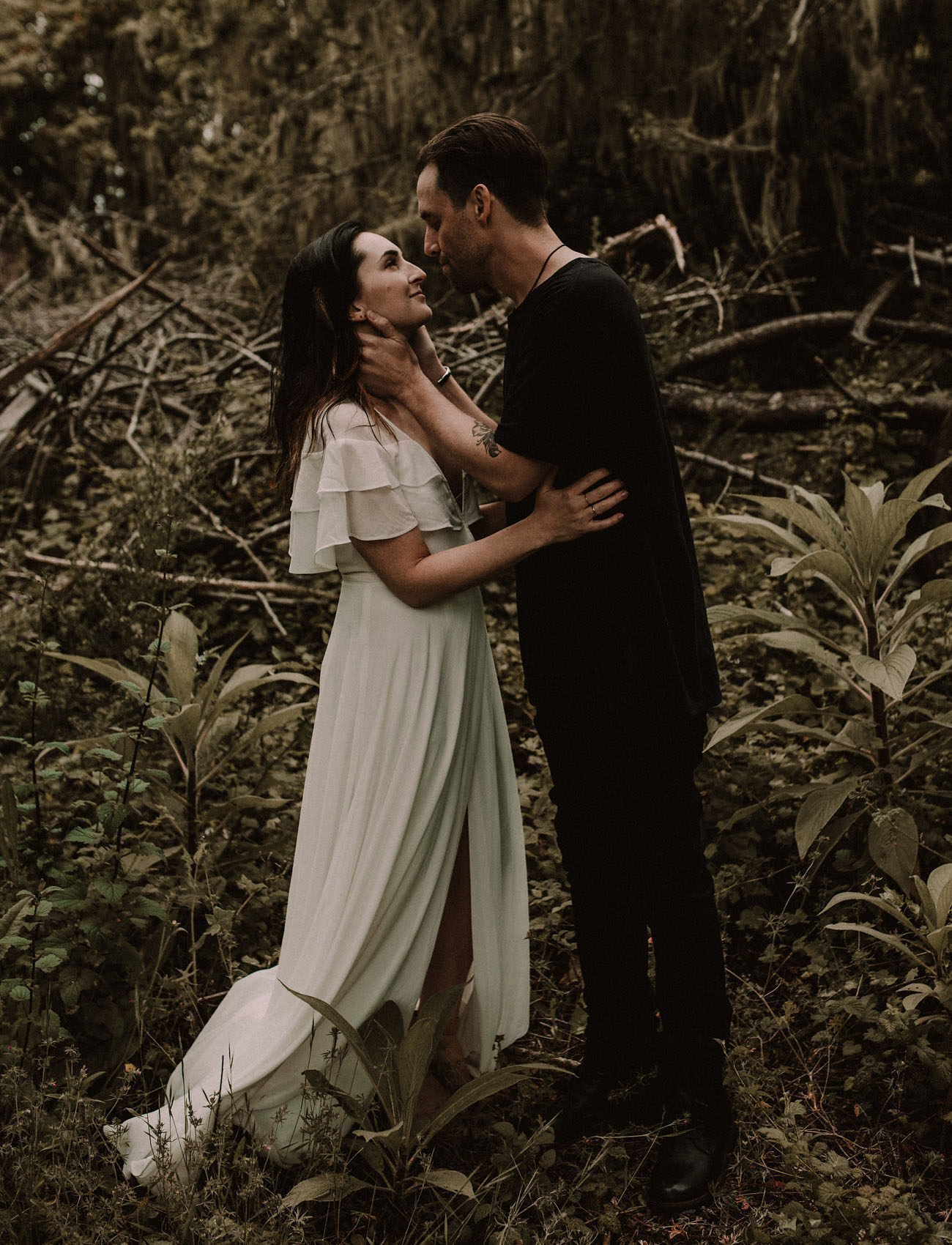 Photographer The Moody Romantic tells us: After shooting in their home (and a brief stop and In-N-Out), we headed to the beach. They chose a location that had sentimental meaning to them; they visited this spot while they were dating. We went a magical shoreline, a place that held special memories for these two (side note: if you’re trying to pick a place for a shoot, think about locations that have nostalgic value. I promise it will add magic to the shoot). The hills were spotted with coastal wildflowers. The sea was hedged by a rocky cliffside. We also stumbled across the most freaking magical forest path I’ve ever seen – I legitimately felt like we were in Lord of the Rings. 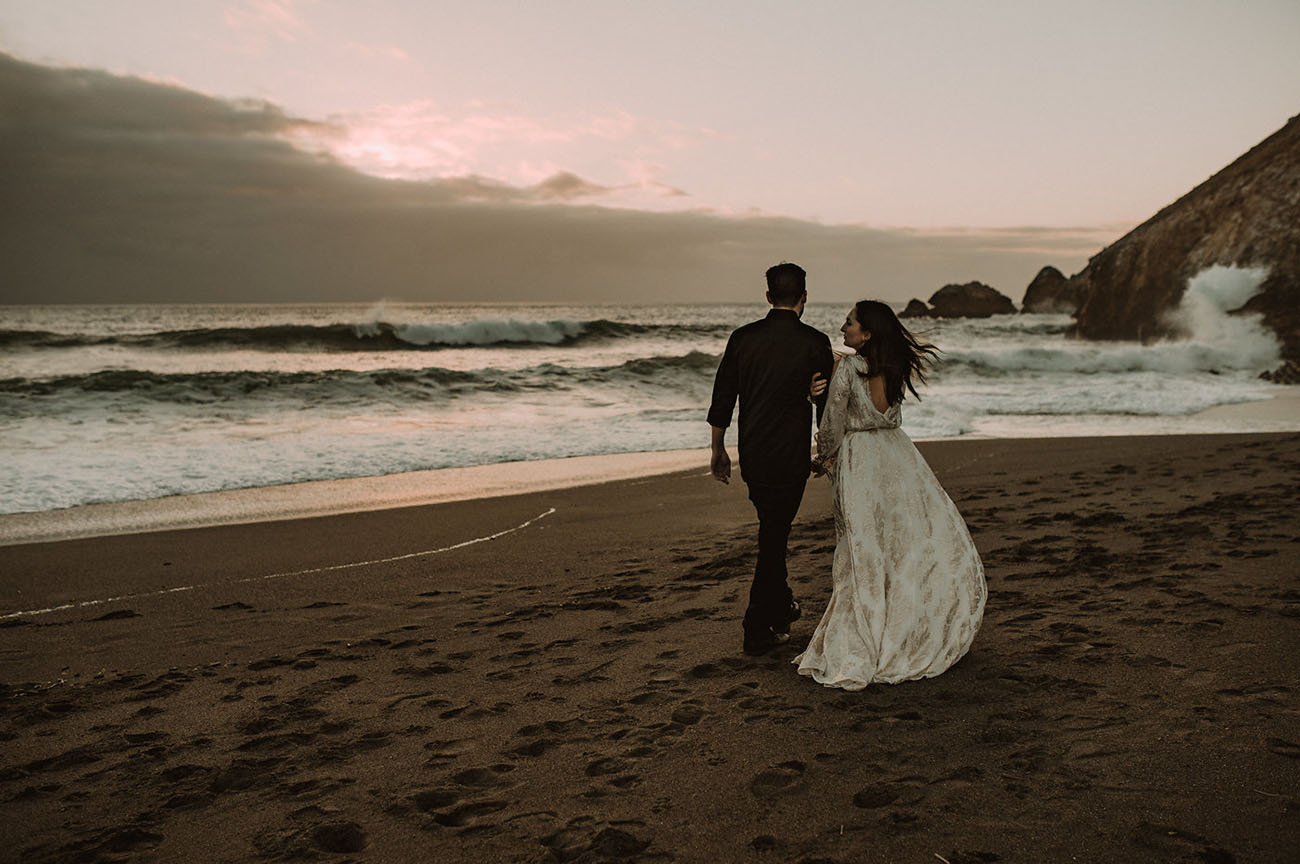 The day was cloudy which made for cool moody lighting, but as the time for sunset approached, we were hoping for sun. We hopped in the car and started driving, looking for a break in the clouds. We had almost given up hope when we came around a hill and saw the last gleaming bit of sun peaking behind the clouds on a really stunning beach. 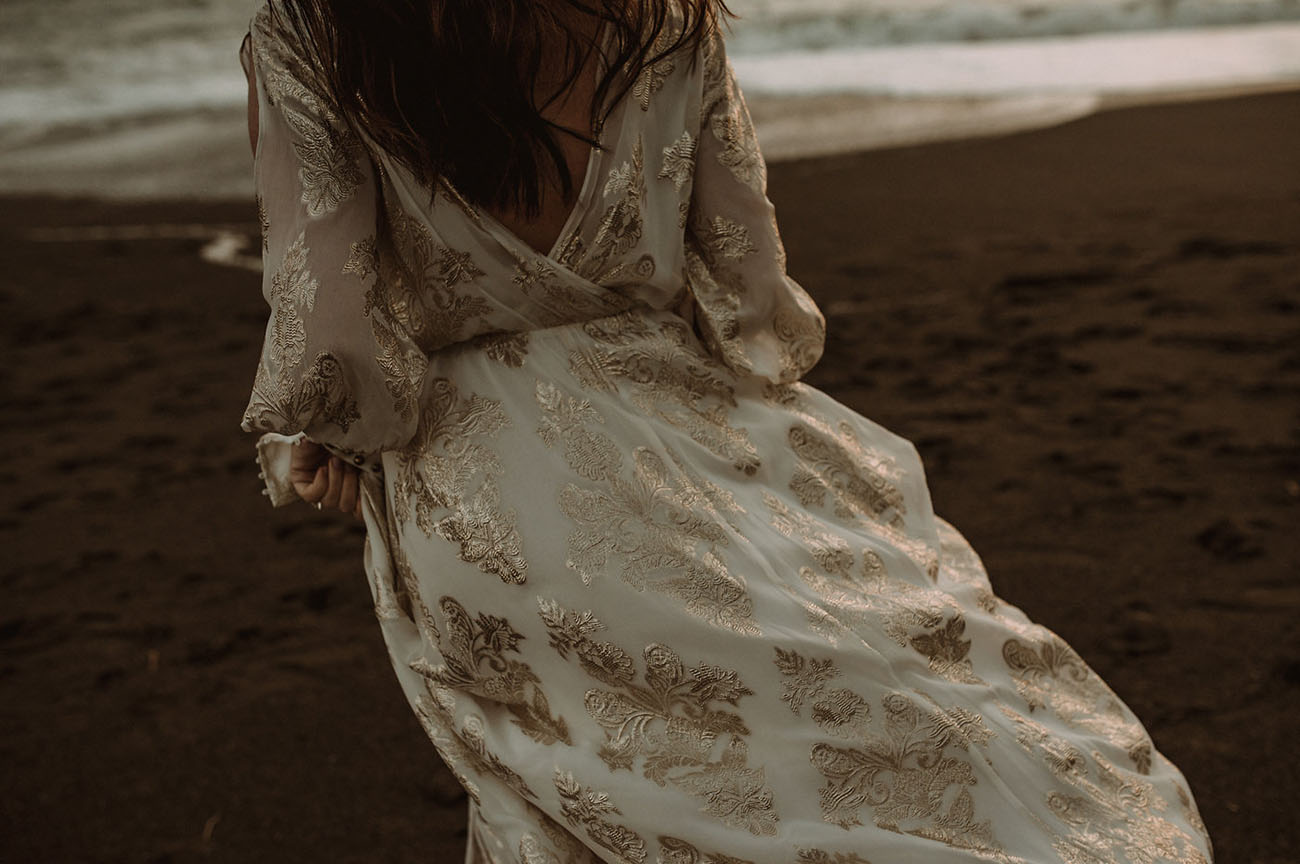 This gilded gold dress is from We Are Kindred from Australia… The way it catches the light is just too good! 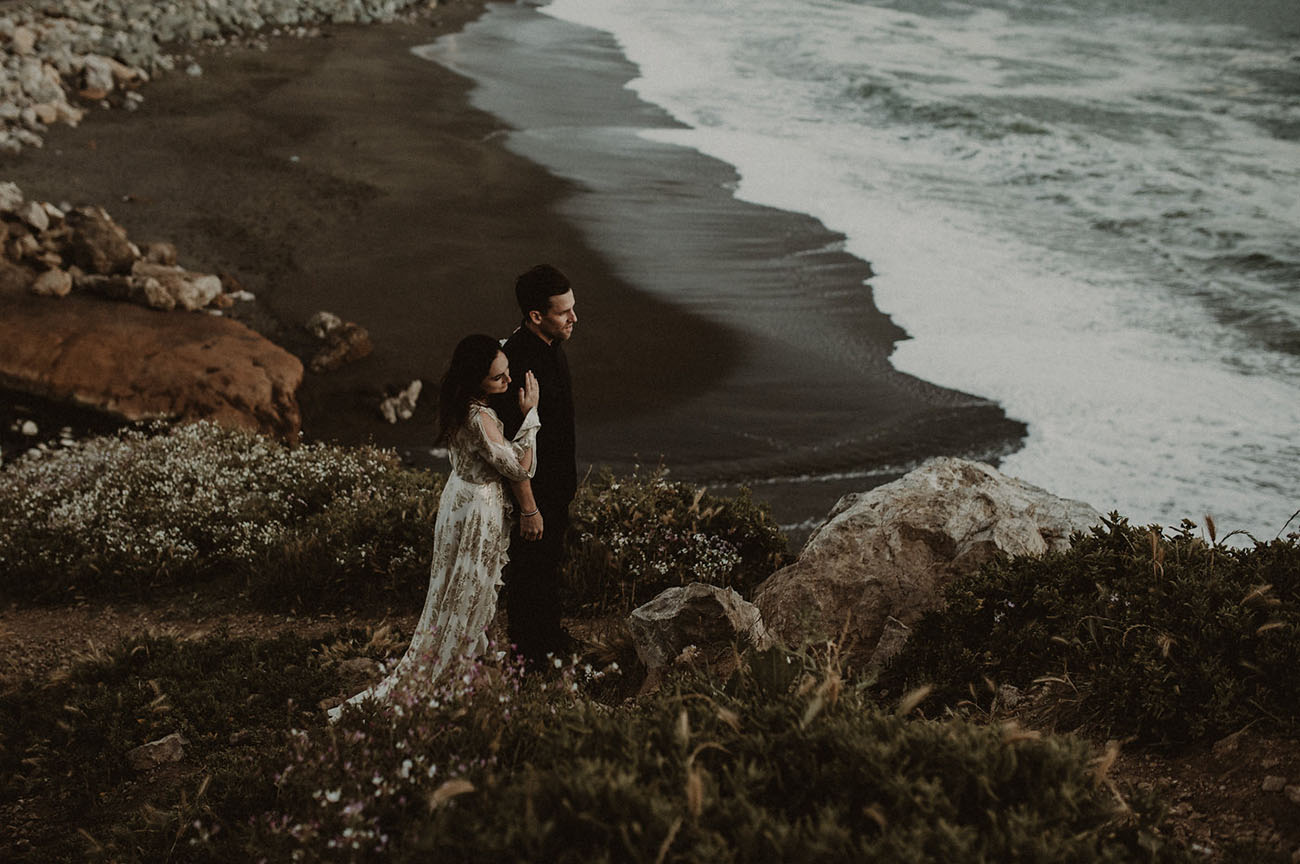 So, we’re curious — if you are planning on doing an engagement shoot, where would you want your photos taken? And especially for those couples hailing from San Francisco, where would you go there?! We can’t wait to hear all about the creative locales you come up with.