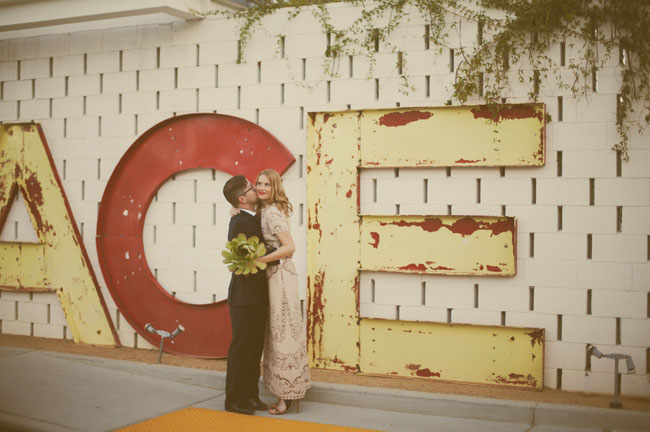 Heather + Nate’s whimsical, modern Ace Hotel wedding, captured beautifully by Feather Love, was packed with tons of unique personal touches that really allowed them to make the day their own. But at the end of the day, they put most of their focus on hosting a good party, where everyone would have an amazing time. Totally my kind of wedding! I’m crazy in love with Heather’s incredible blush-hued Valentino dress, which she pared with the most unusual veil I’ve ever seen – seriously, wait until you see it! And be sure to read about her inspiration behind it! Here’s more from the couple about the day:

There wasn’t any real main “inspiration” for the wedding. We just wanted to make the wedding as fun as possible. We met at art school, and our relationship blossomed out of some crazy art school dance parties. So, for the wedding we wanted to make sure everyone got on the dance floor. We chose the desert because we’ve always loved going out to Joshua Tree, but there weren’t any hotels there that could hold the entire wedding crew, so we decided on the Ace. I liked the idea of the desert also, because it is such a surreal landscape, and I thought of the whole idea of getting married as a surreal moment. Such a huge life change… 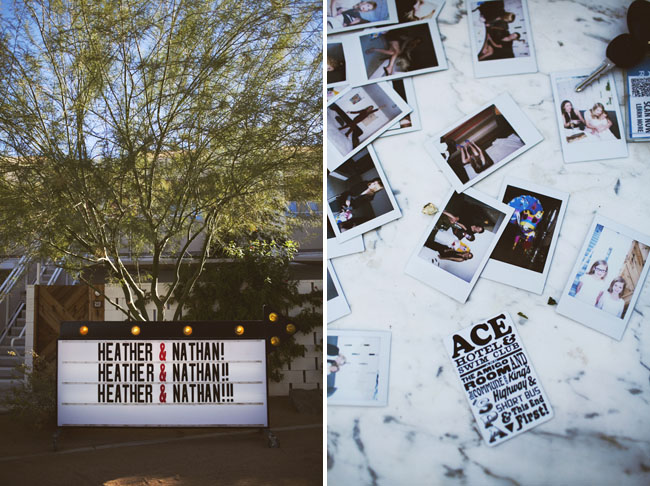 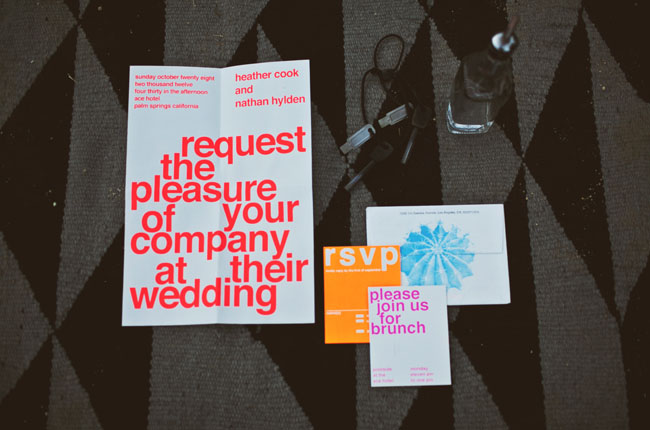 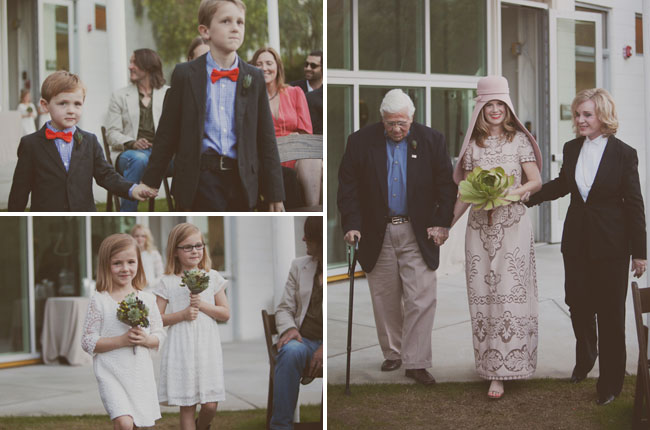 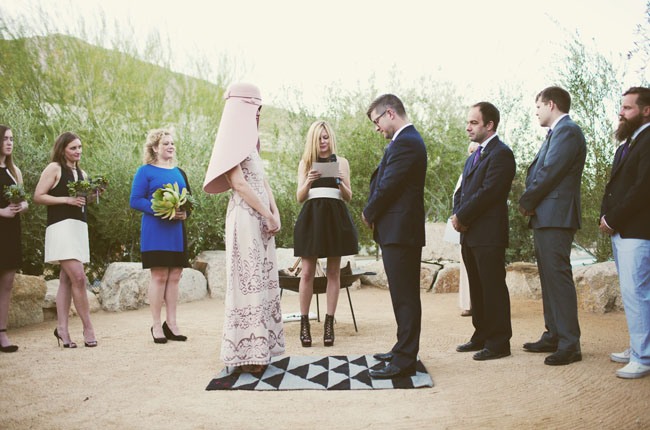 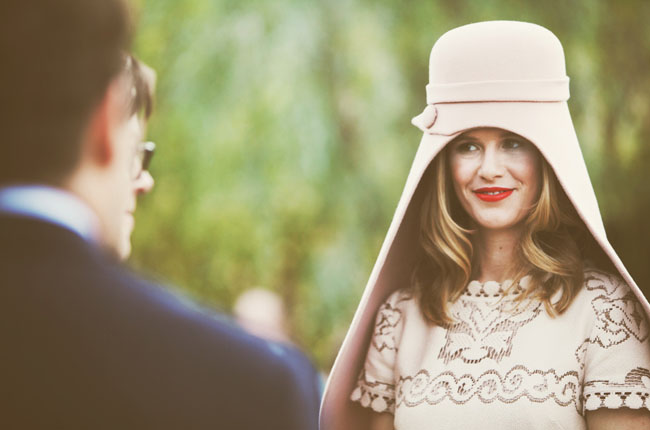 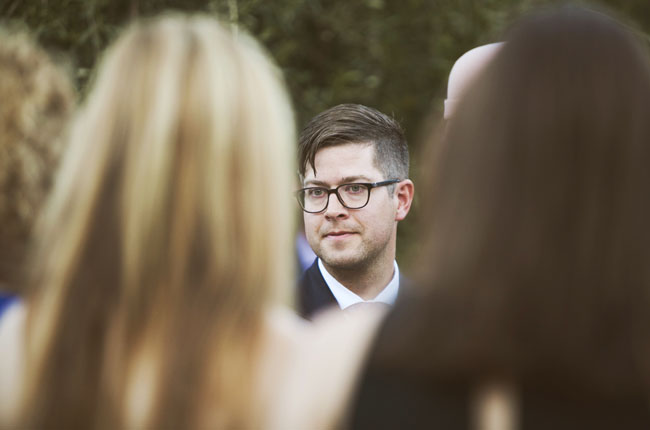 Nate composed a single tone song that lasted 2 minutes. (Very John Cage). It played during our ceremony, and while it played we just stared into each other eyes. It became a great moment to pause and be in the moment. It was also funny because the audience didn't know what was happening, so they'd occasionally laugh. It really reflected our love of minimalist art, humor, and each other. 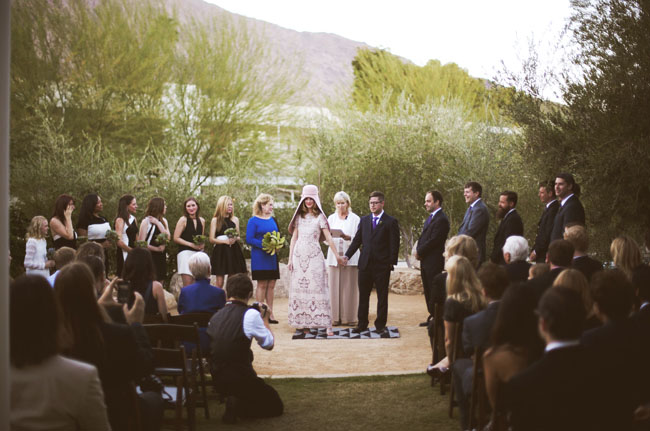 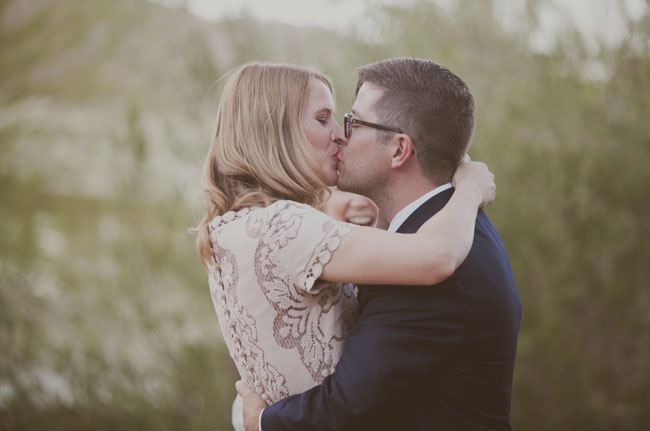 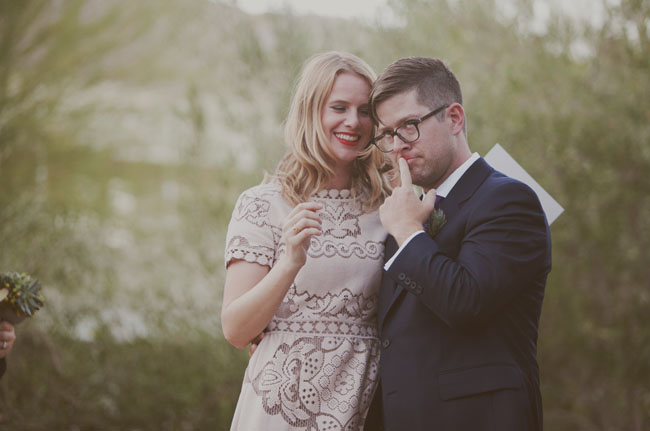 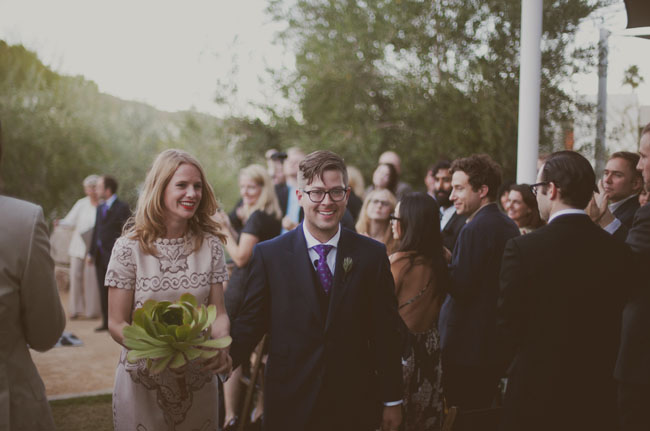 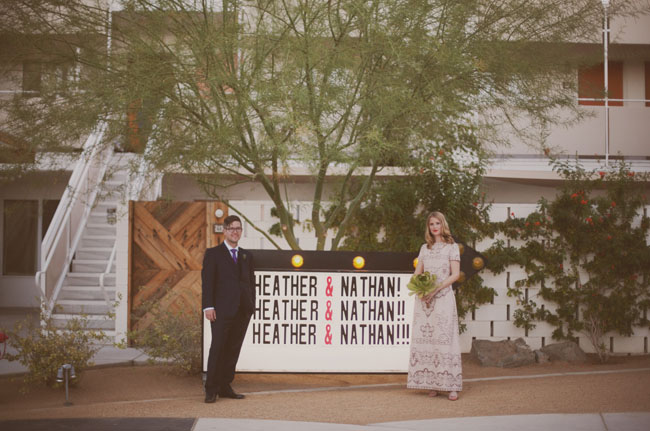 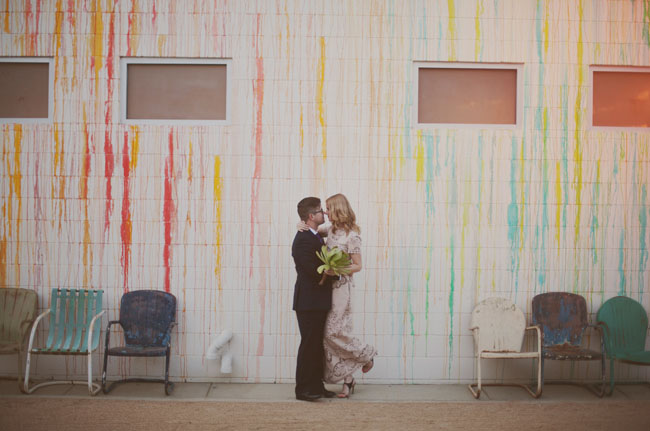 Now for the inspiration behind Heather’s ultra-modern wedding “veil”! :) She initially wanted a version of the famous Balenciaga hats (the original of which was from 1965), but when she tried to order one, they were sold out. So she commissioned a custom-made headpiece from Gunner Fox, who has made a bunch of hats for movies, like Gangs of New York! From Heather, I thought of the hat as a modern take on a veil. It also had a combination of surrealism and humor. So fun + unique, right?! 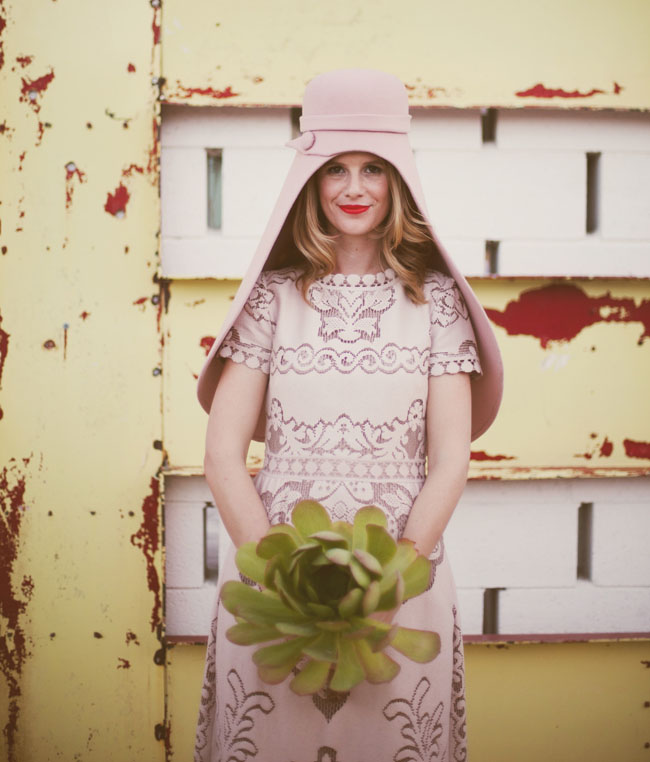 And how much do you love her giant succulent “bouquet”?! So rad. 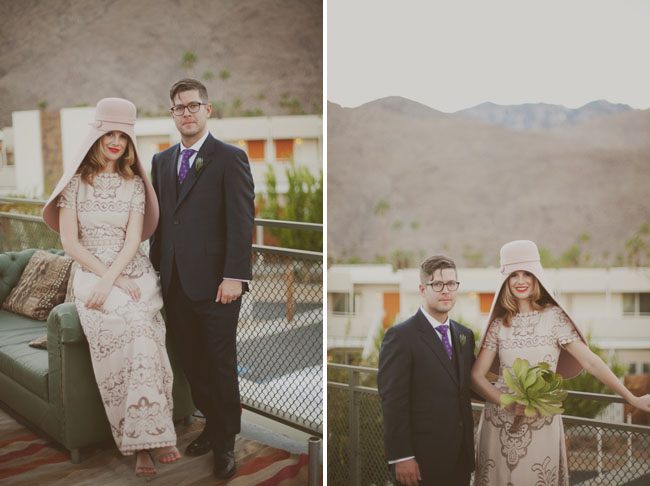 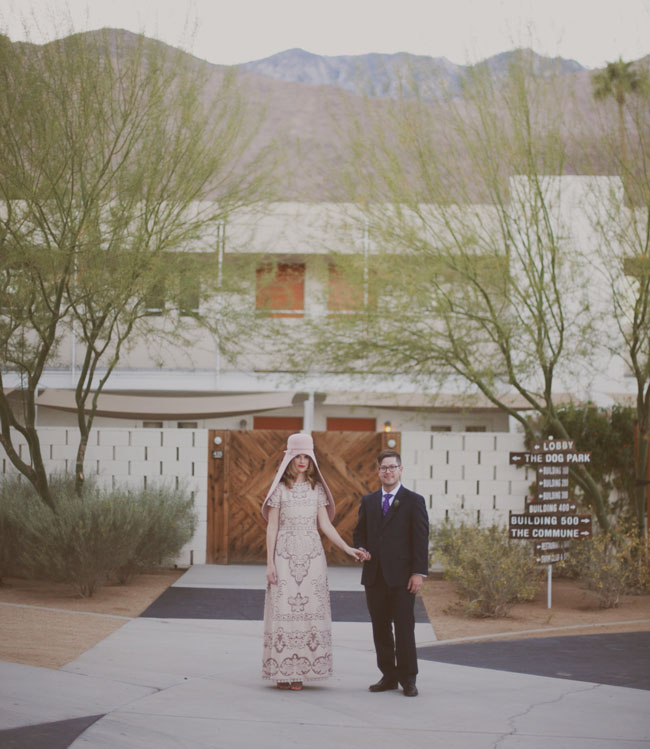 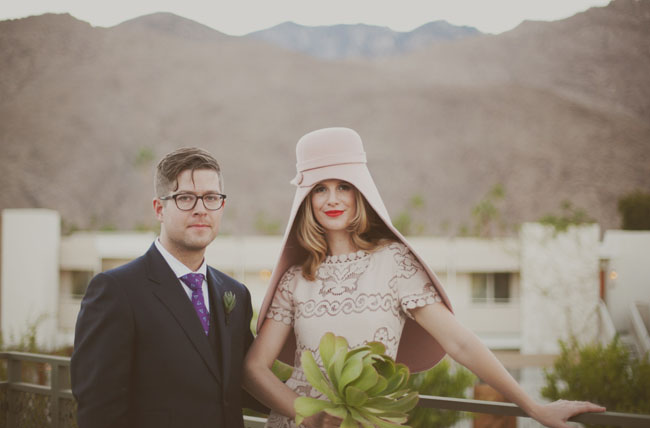 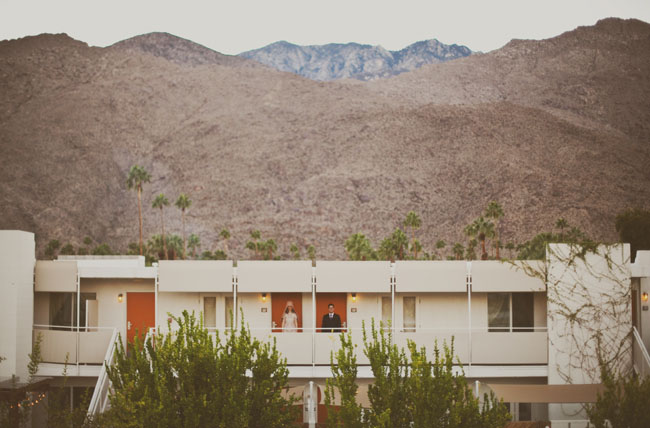 I didn’t want all the girls in the same cheesey bridesmaid dress, so, I gave them simple guidelines: black + white colorblock dresses. They went out and found their own. That way they got a dress they liked, and they would all look cohesive together. They also picked out their own shoes – I encouraged them to have fun with it. As you can see one of my best friends bought some fun studded shoes! They did their own hair and make up…I wanted everyone to look like themselves. 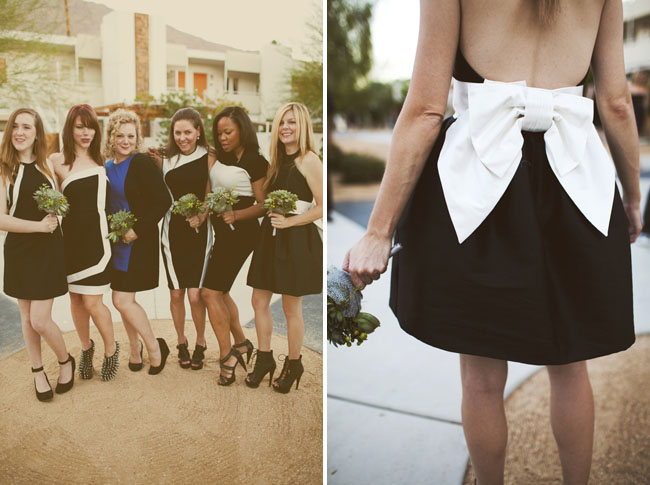 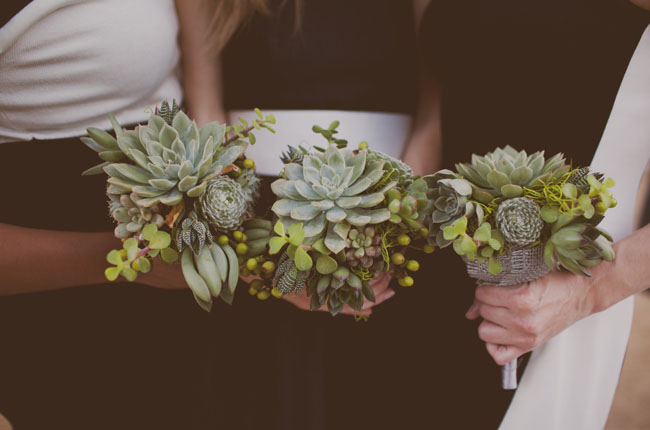 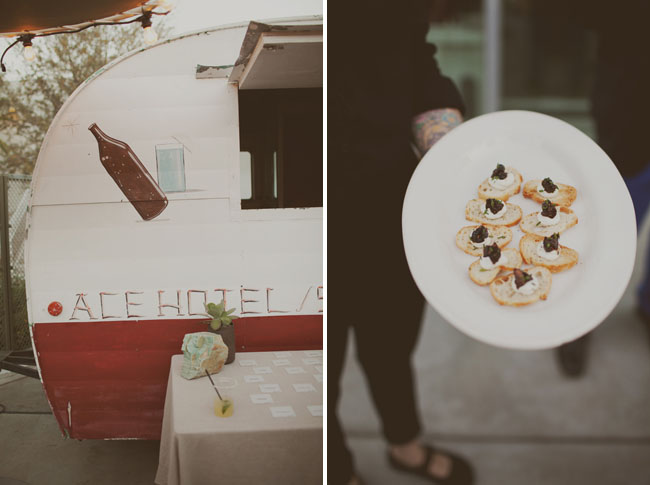 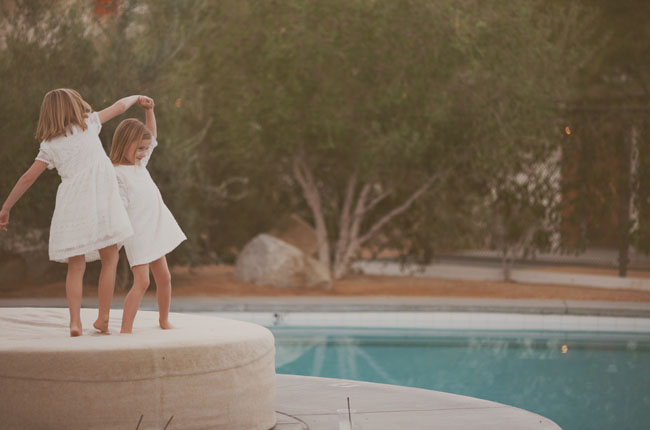 Heather made all of the succulent + cactus centerpieces herself and sleek metal house numbers were used in lieu of traditional table numbers. Love the fun, modern vibe they bring to the reception design. 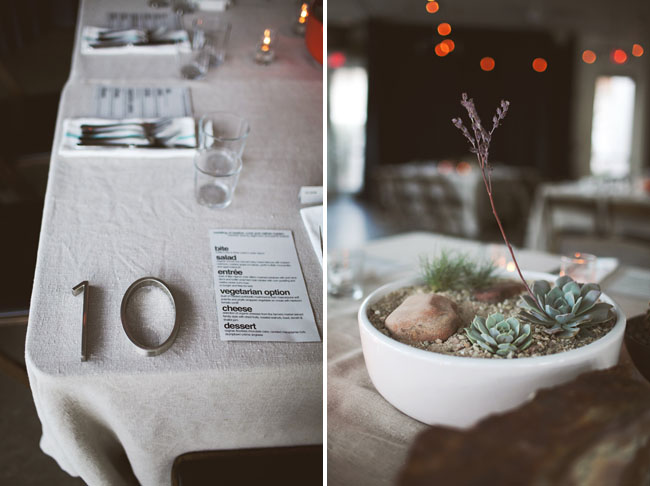 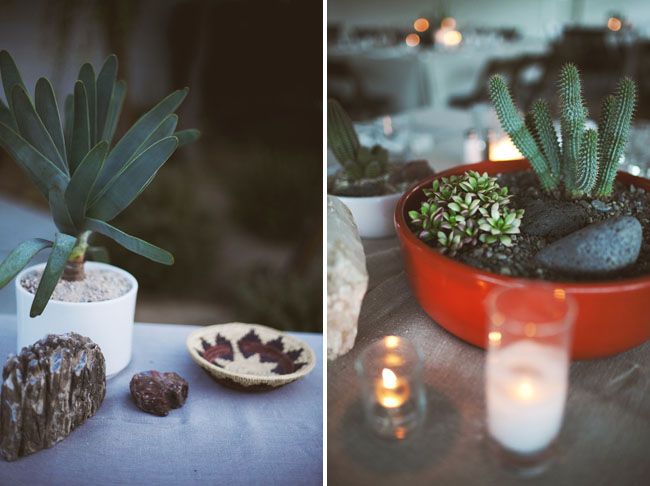 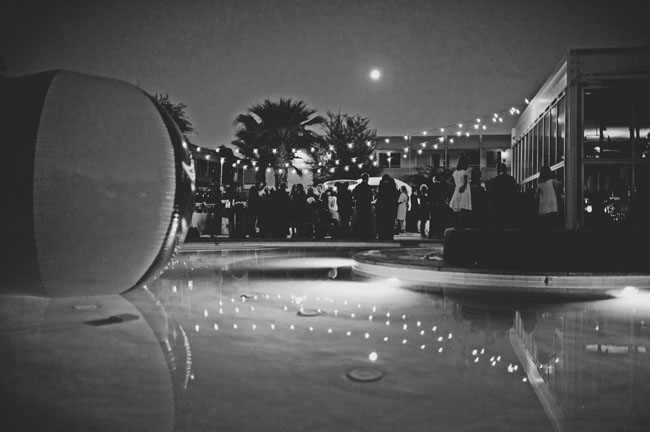 Heather + Nate, congratulations + thank you so much for sharing your day with us!

Oh, and if you love Feather Love’s work, Noa is now offering a special for couples that would love to hire her but can’t quite afford her rates. One couple per month will get 31% off her rate – more info found here.