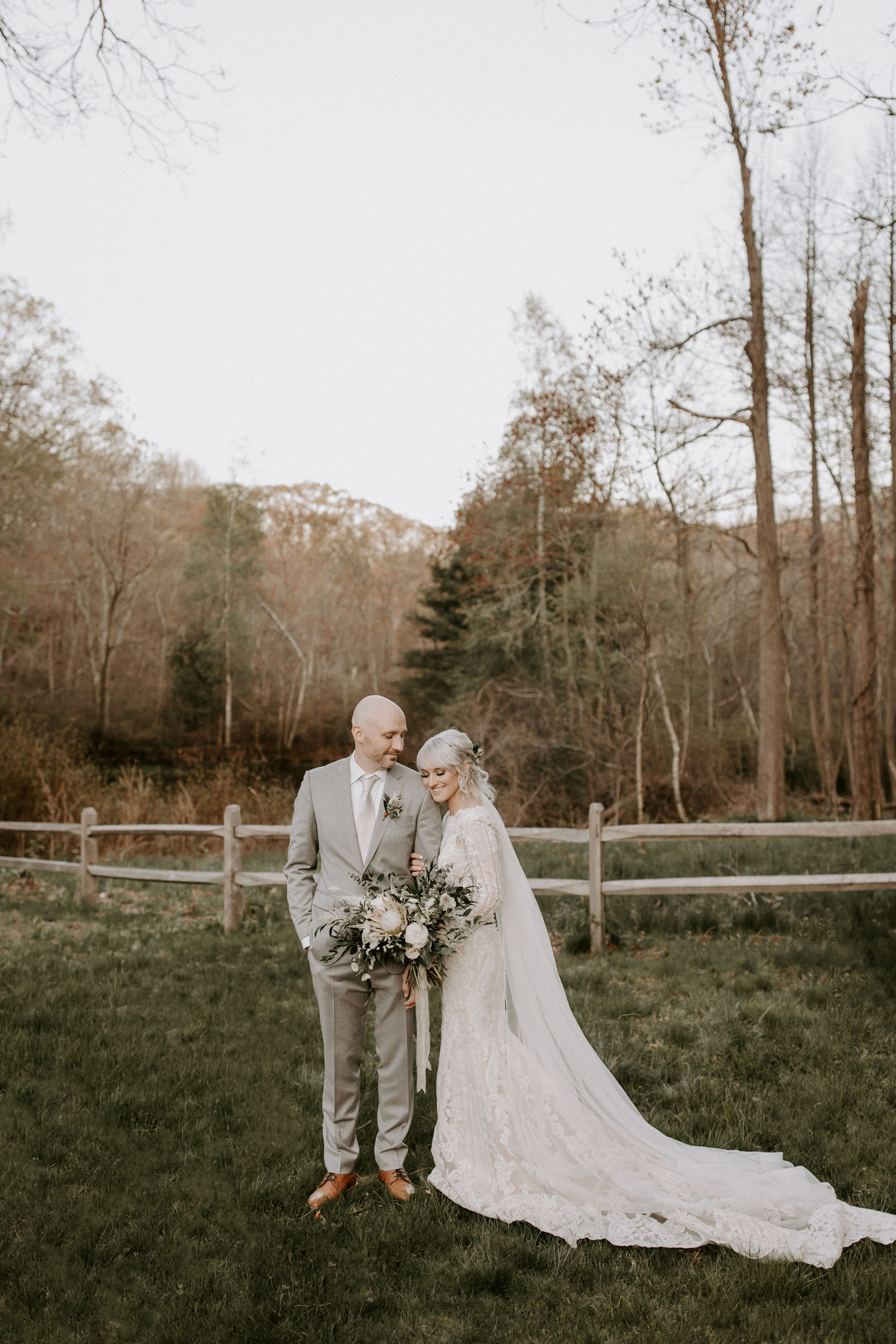 Cue the tissues. Alesha and Bruce’s wedding story is a reminder of what truly is important in life and will definitely leave you teary-eyed after reading.

The couple, who had already had to reschedule their special day due to the pandemic, finally was able to throw their intimate and welcoming wedding at Briar Barn Inn in Rowley, MA, until more tragedy struck.

According to Julianne Lesinski of Scarlet Roots Photography, while getting ready for the wedding, Alesha’s father unexpectedly suffered a heart-attack and had to be rushed to the hospital in an ambulance. “It was just hours before Alesha was set to walk down the aisle,” says Julianne. Thankfully, he was able to recover, but the hospital determined he wouldn’t be able to attend the ceremony or walk Alesha down the aisle that day. While most couples would have had to cancel their wedding, the hospital staff and a team of amazing wedding vendors jumped into action, instead. With approval from the doctors, they were able to pull off an impromptu ceremony at the Beverly Hospital—so that Alesha’s father could still be part of the special day and even walk her down the aisle.

“Alesha and Bruce had high spirits through it all,” says Julianne. “They reminded us that the most important detail of a wedding day is the love, support, and connection with one another.” Alesha, too is grateful for having a vendor team that went above and beyond for them during their wedding day. “It underscored the importance of finding vendors that not only can achieve your wedding vision, but also fit you as a couple,” says Alesha. See more of their emotional-filled wedding below to learn more about their heartfelt day. 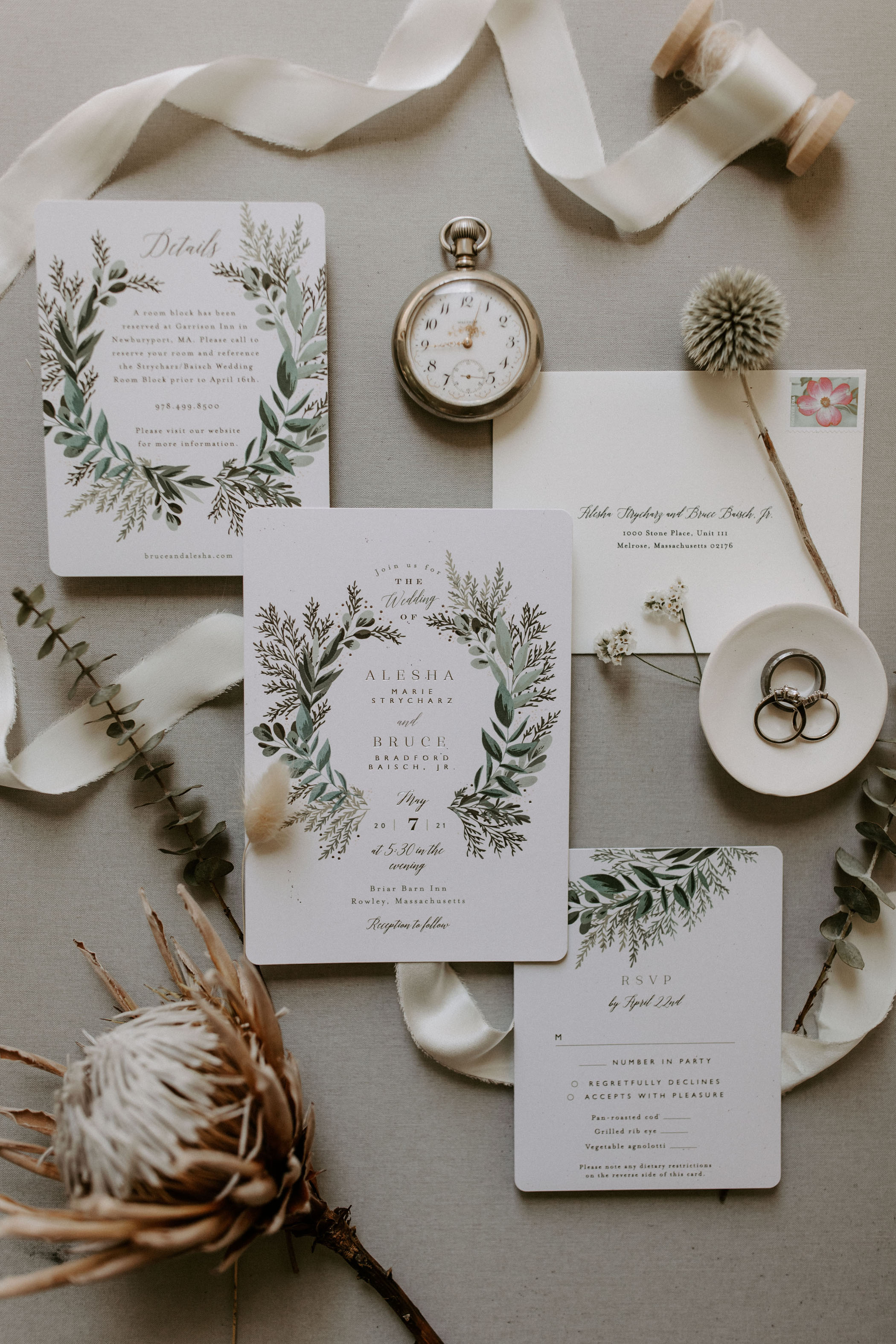 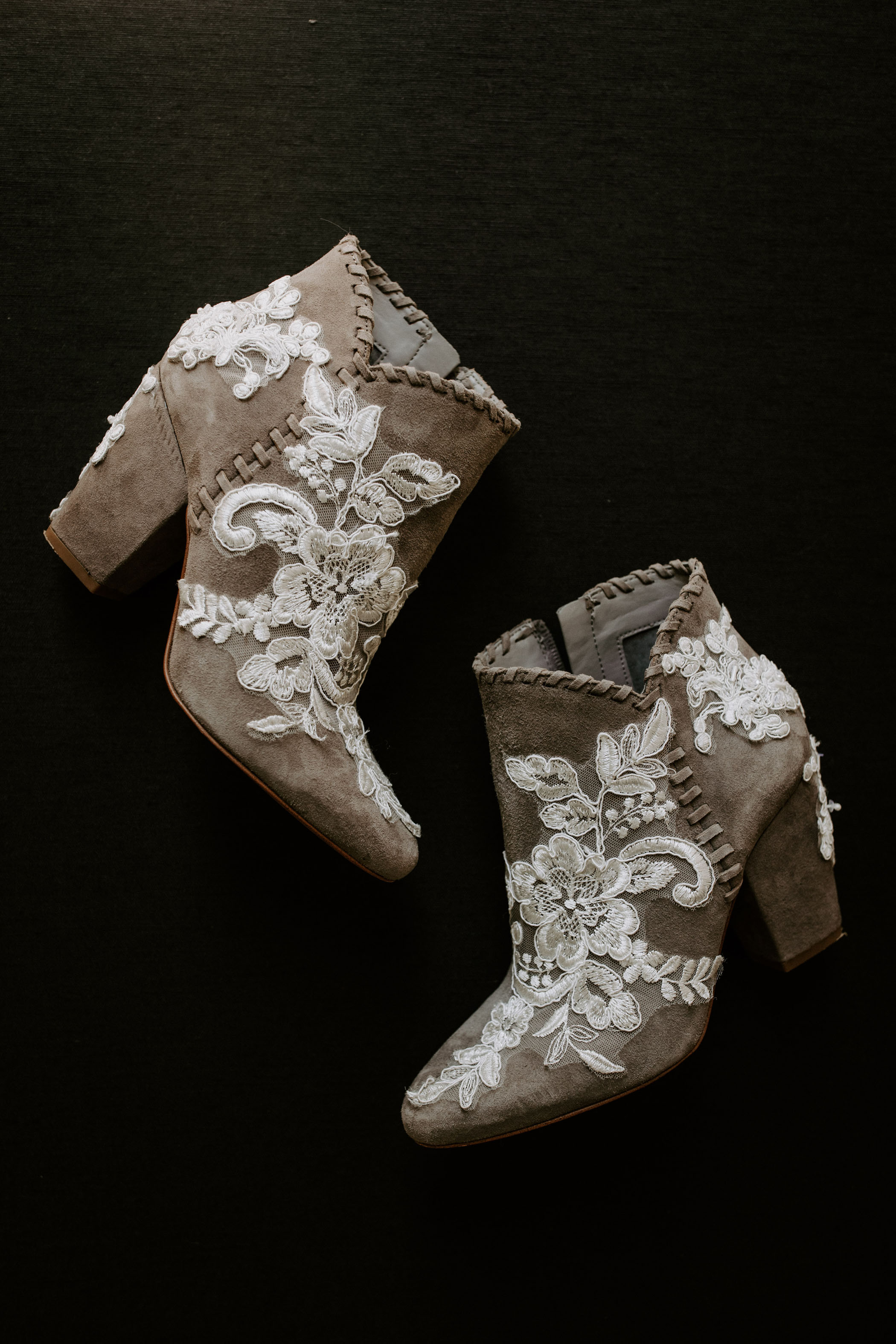 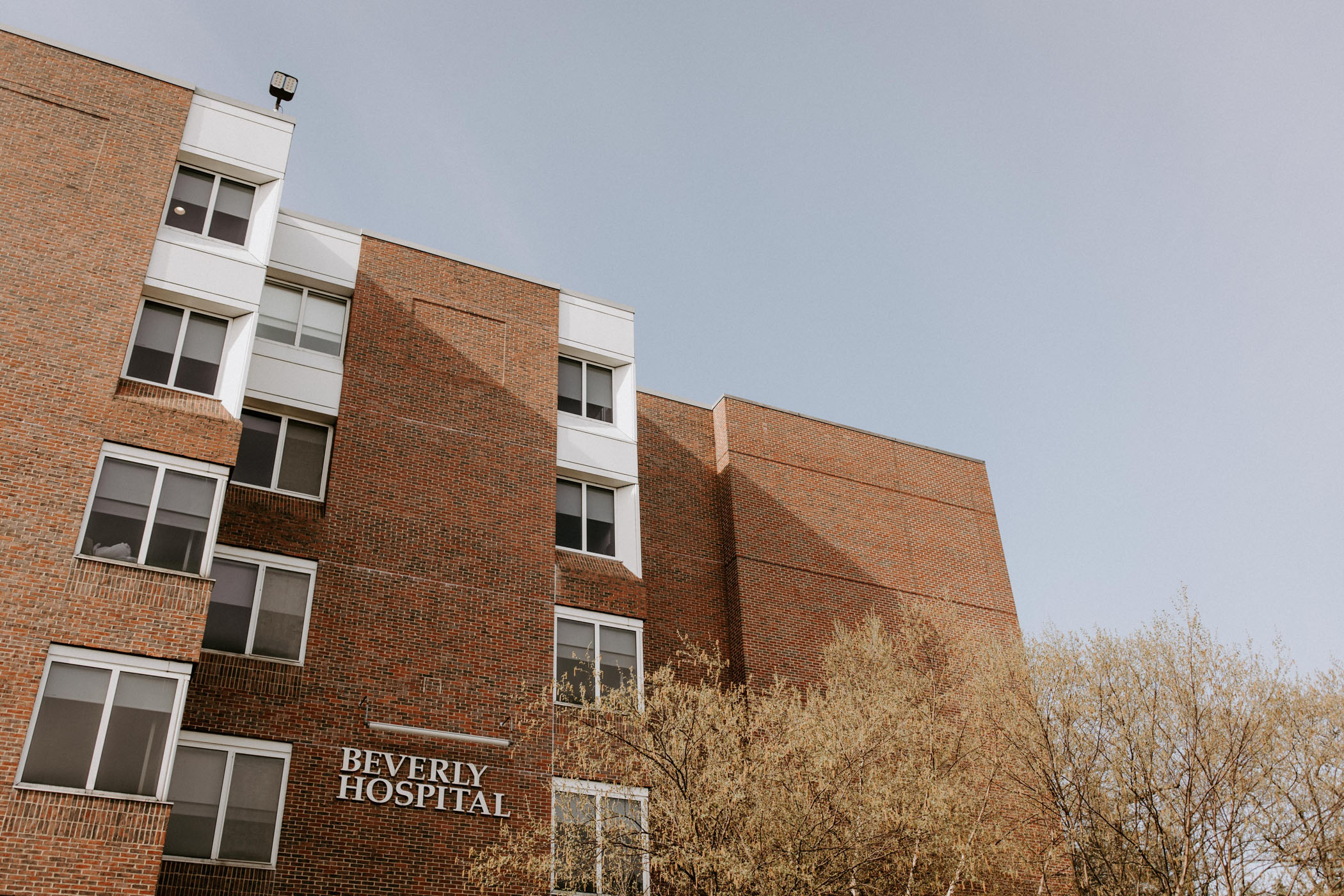 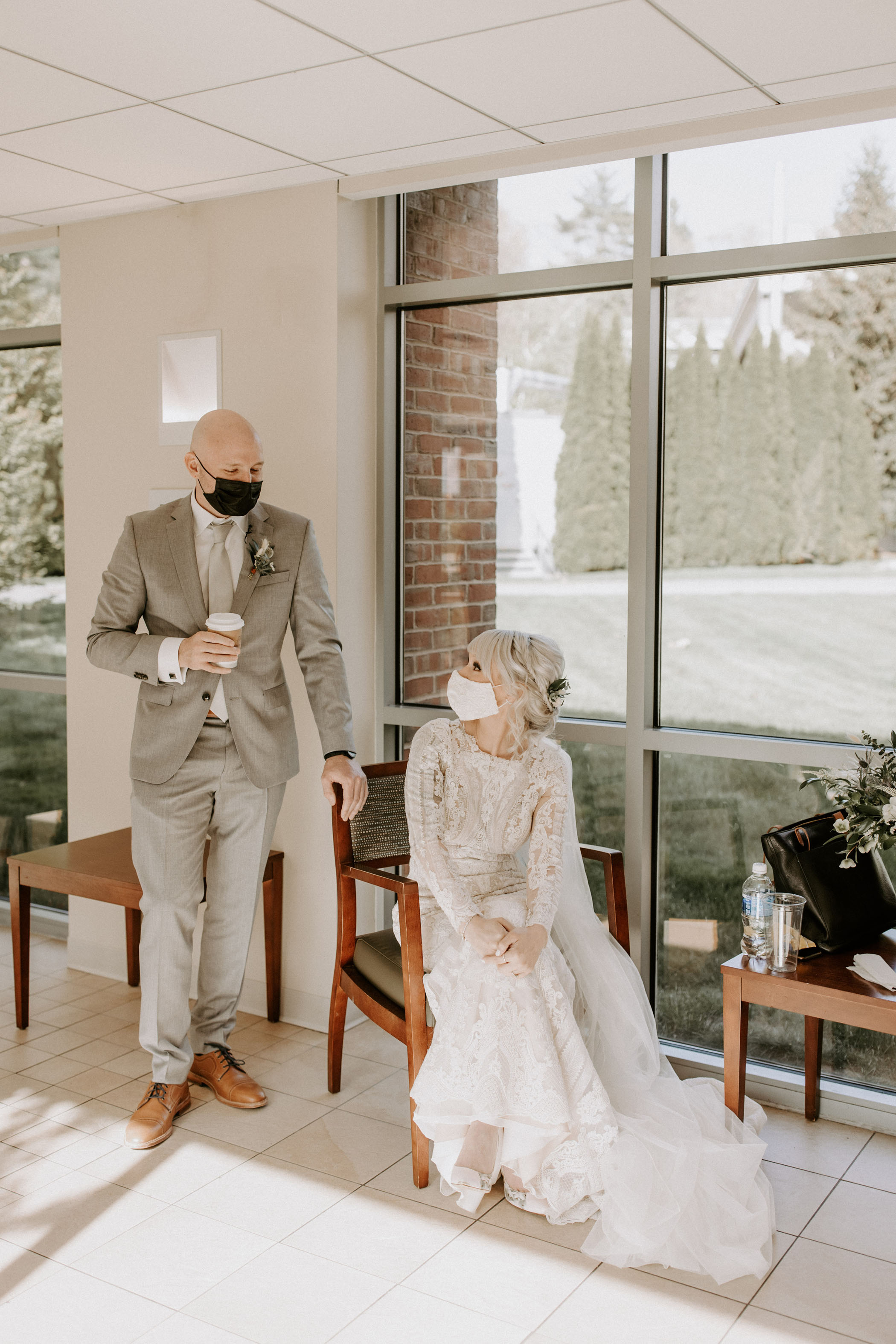 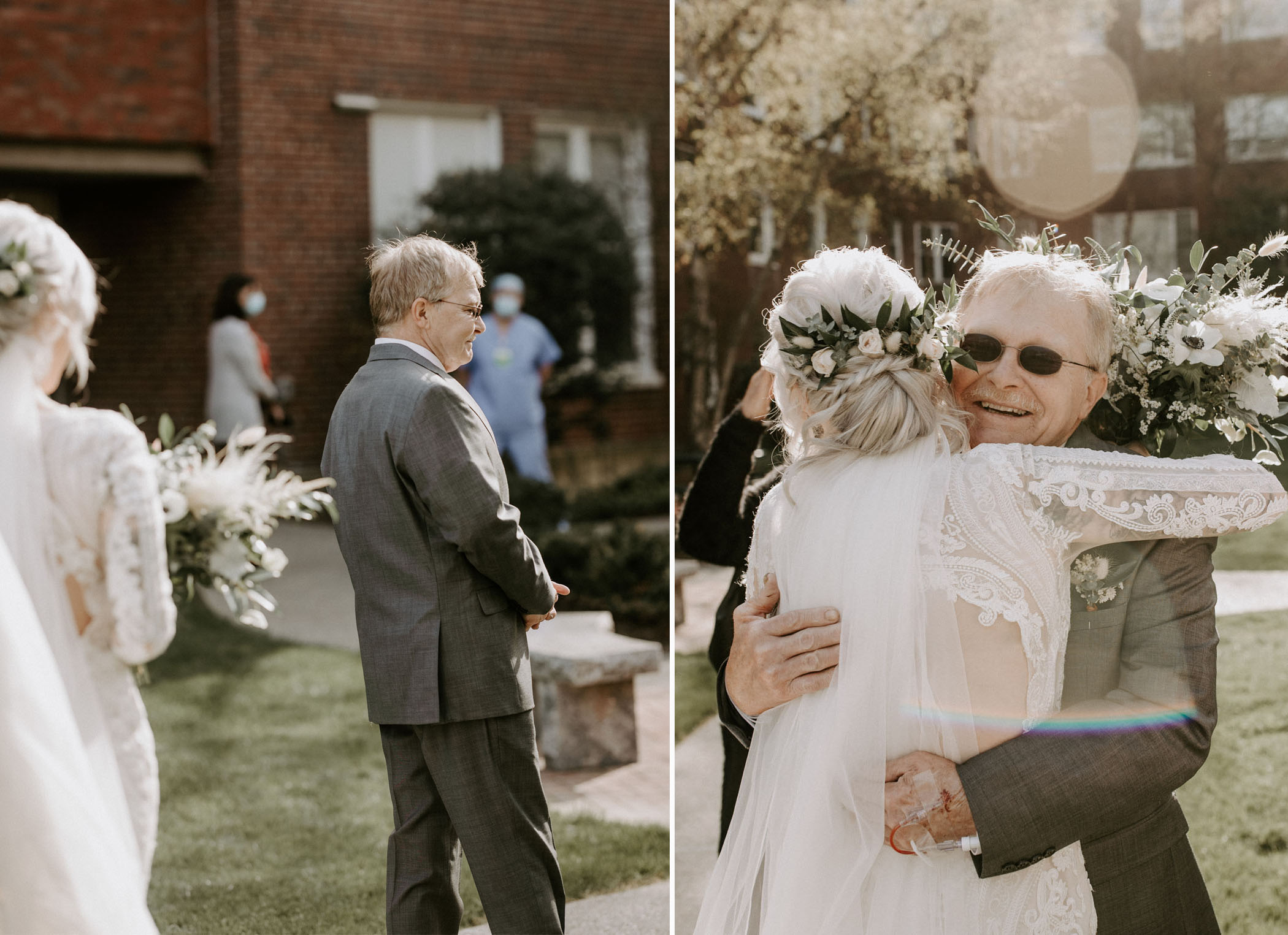 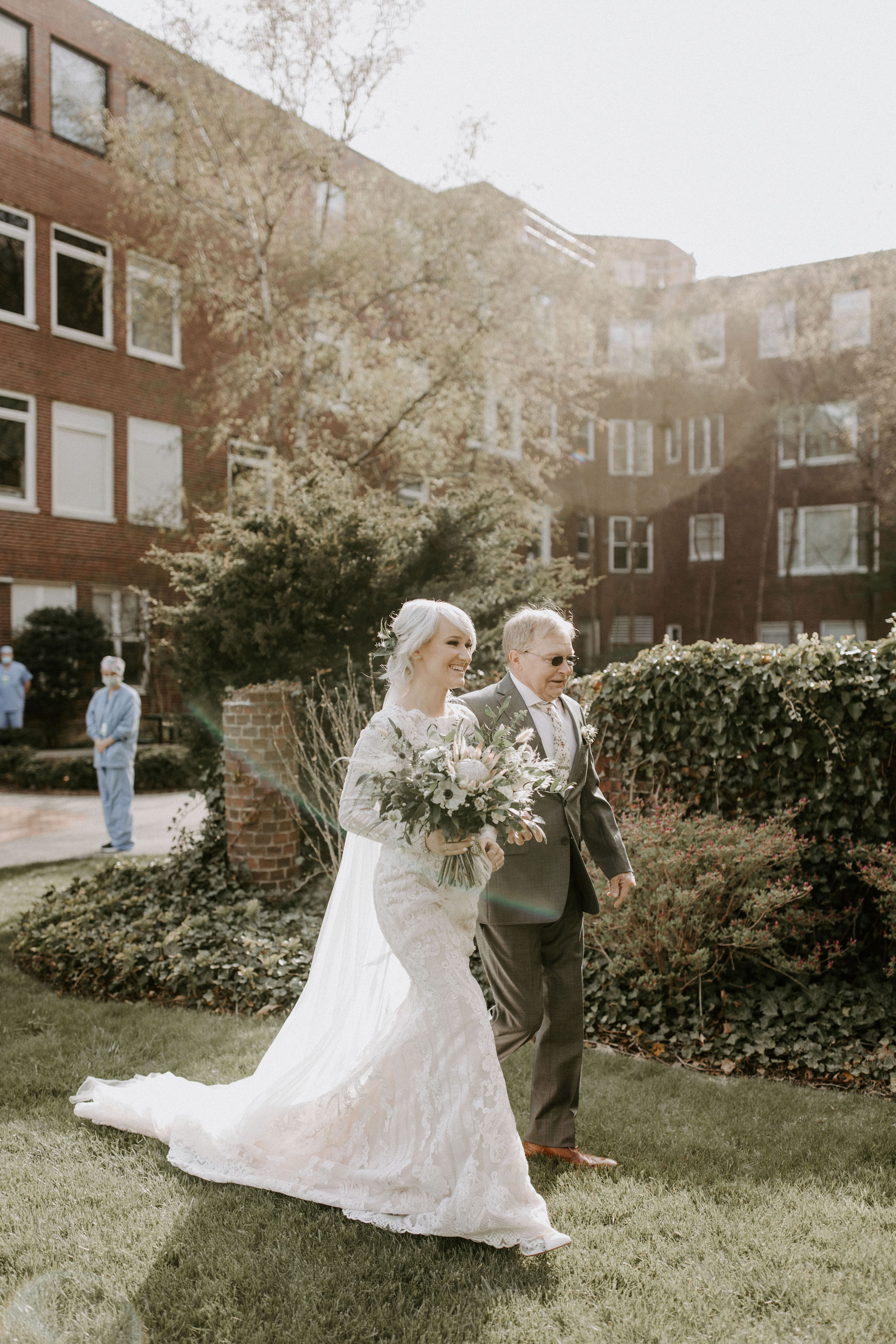 There were truly so many, but being married in the courtyard of Beverly Hospital is by far the most memorable moment! After all of the unknown immediately after my dad’s heart attack that morning, it was an amazing feeling to have him be able to walk me down the aisle knowing that his cardiac care team was just steps away. 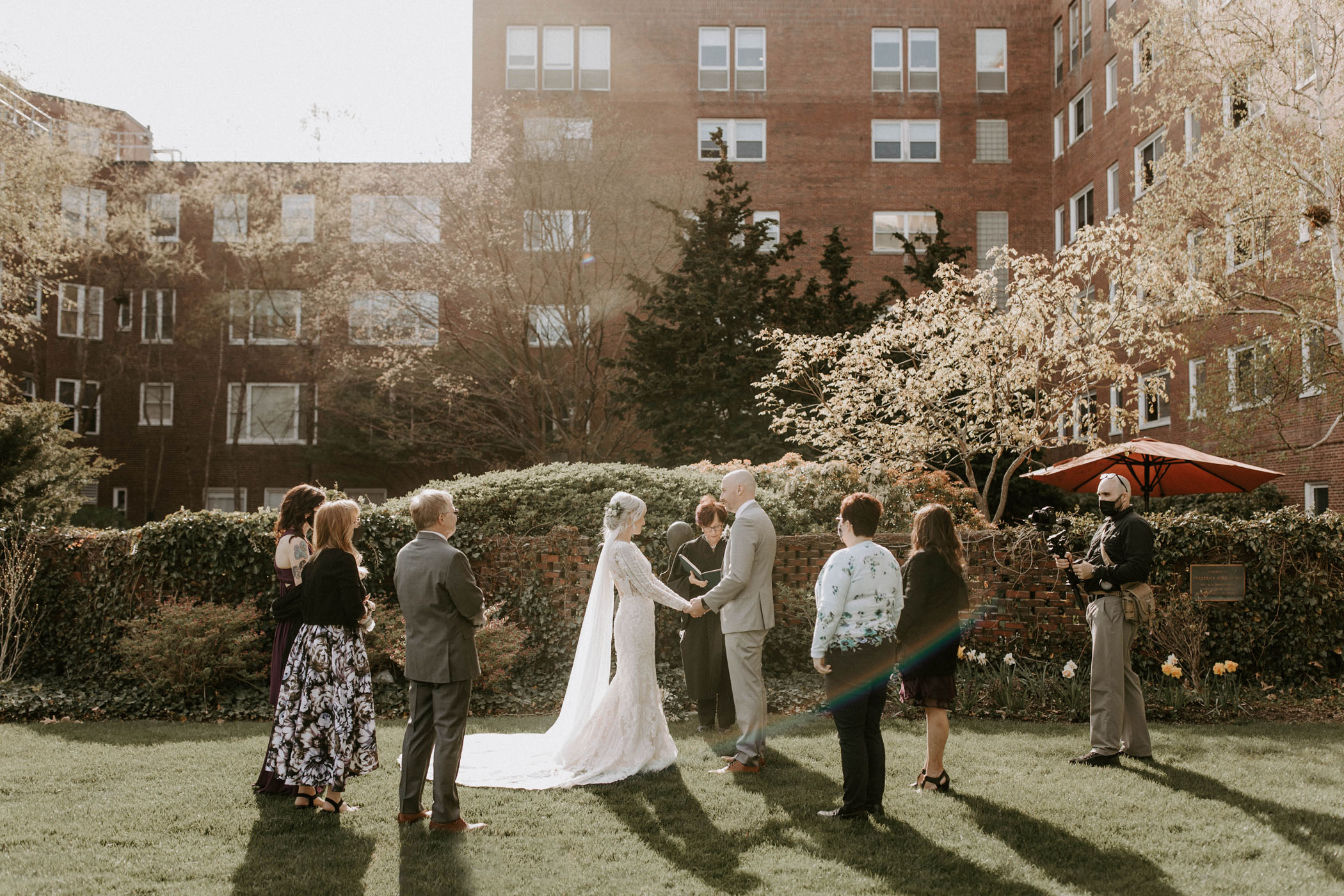 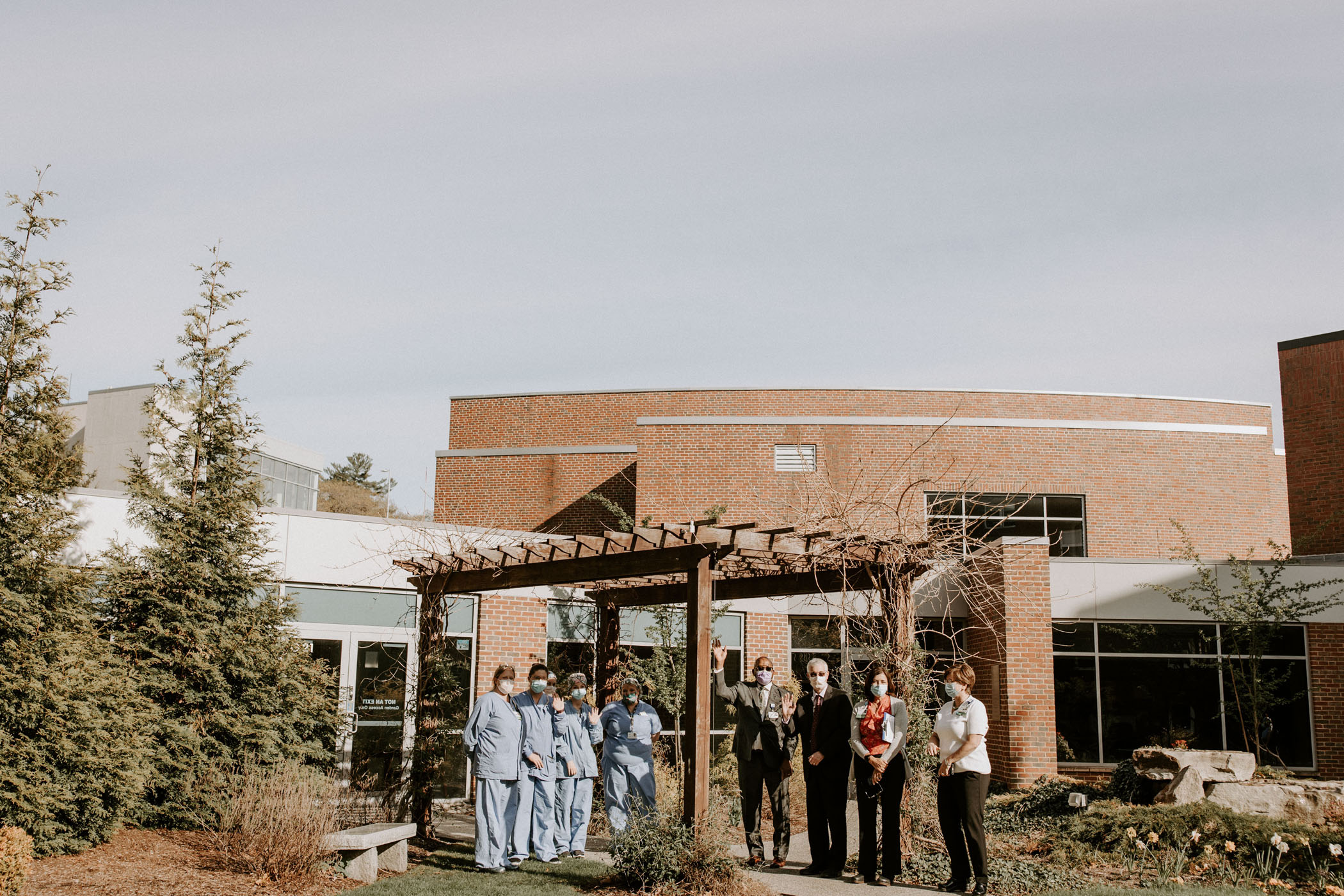 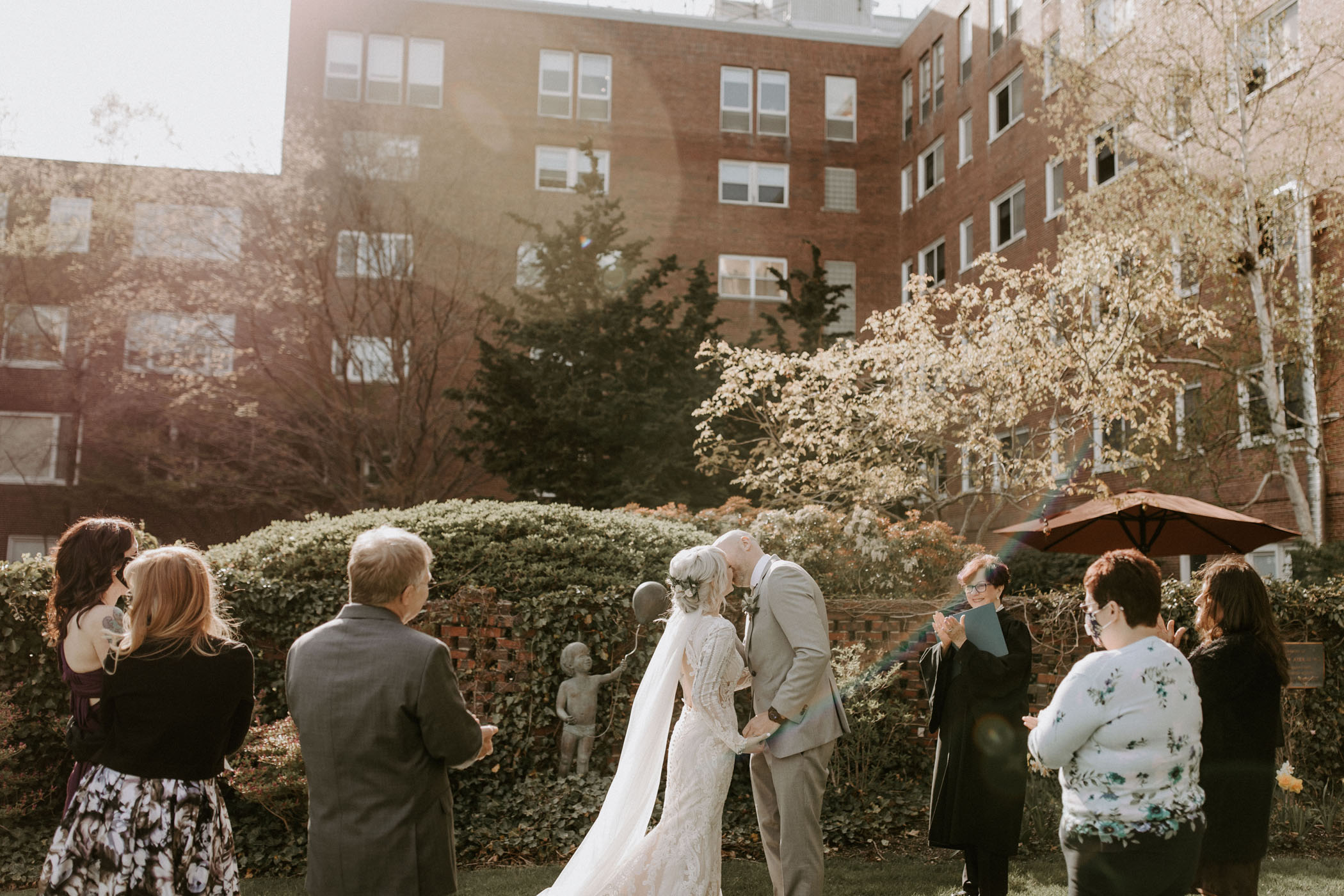 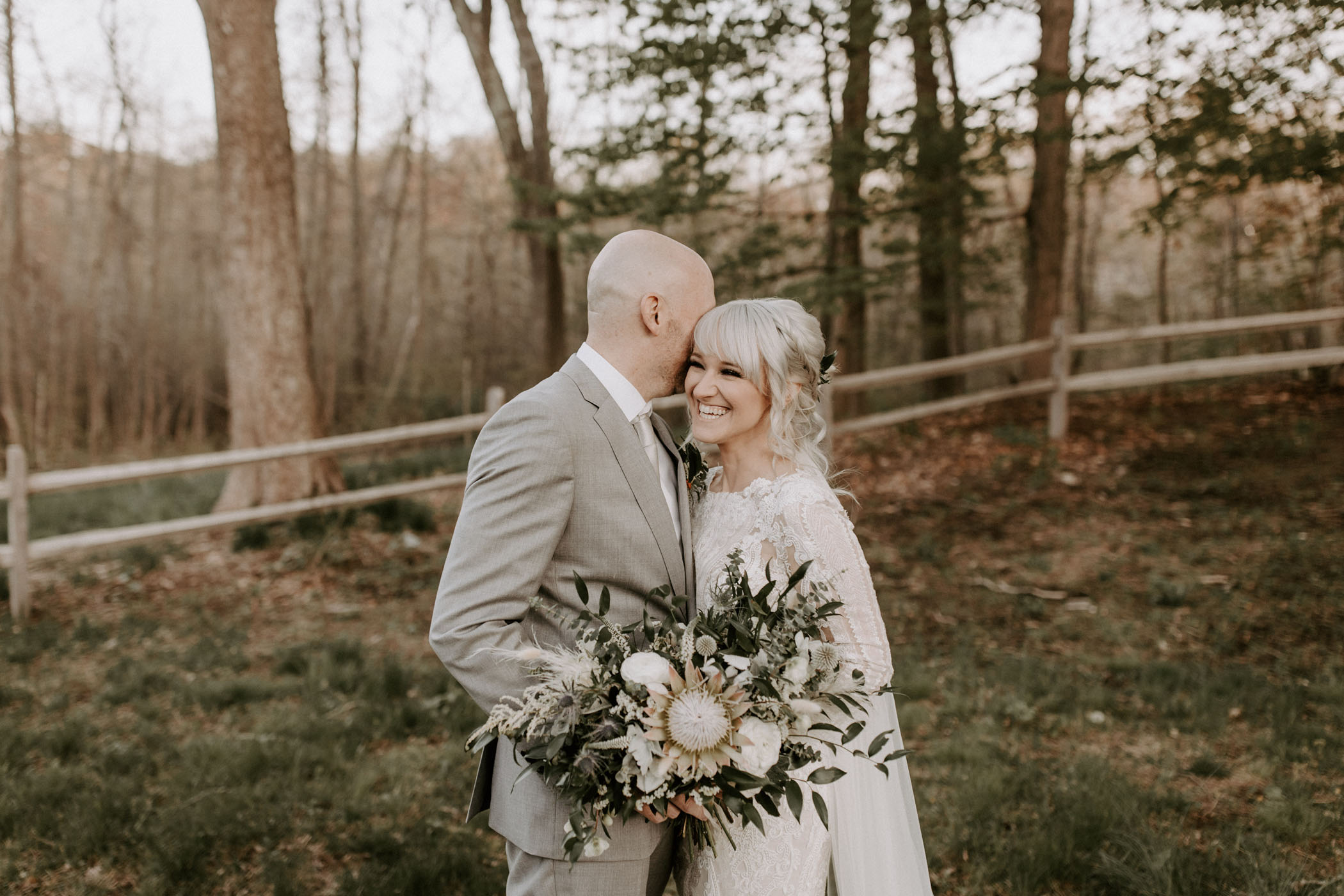 Alesha says she found her effortlessly elegant gown in July of 2020. “It was right when fitting rooms were allowed to reopen after the first COVID-19 lockdown,” explains Alesha. Adding that with the new safety protocols it was far more clinical than the bubbly “Say Yes to the Dress” episodes that she had religiously watched. However, despite the changes and guidelines she was able to find her oh-so romantic lace sleeved Badgley Mishcka gown. “It was the first dress I tried on and I immediately knew it was the dress,” says Alesha. She tried on other gowns after, but nothing compared. She also had a telling sign in the salon, too. “My dad called me while I was trying it on the second time at the end of the appointment,” says Alesha.  “I took that as my confirmation it was the ‘one.'” 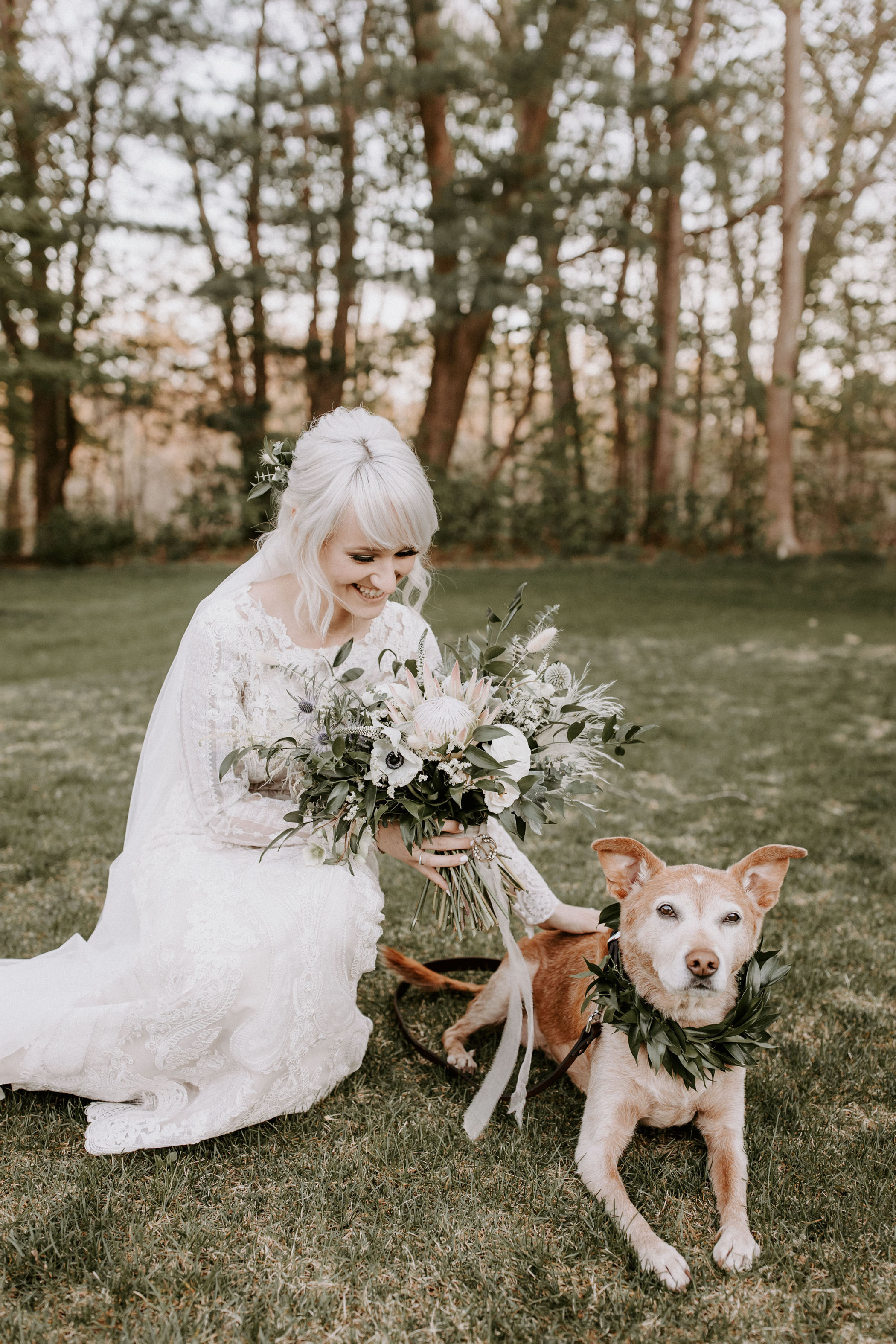 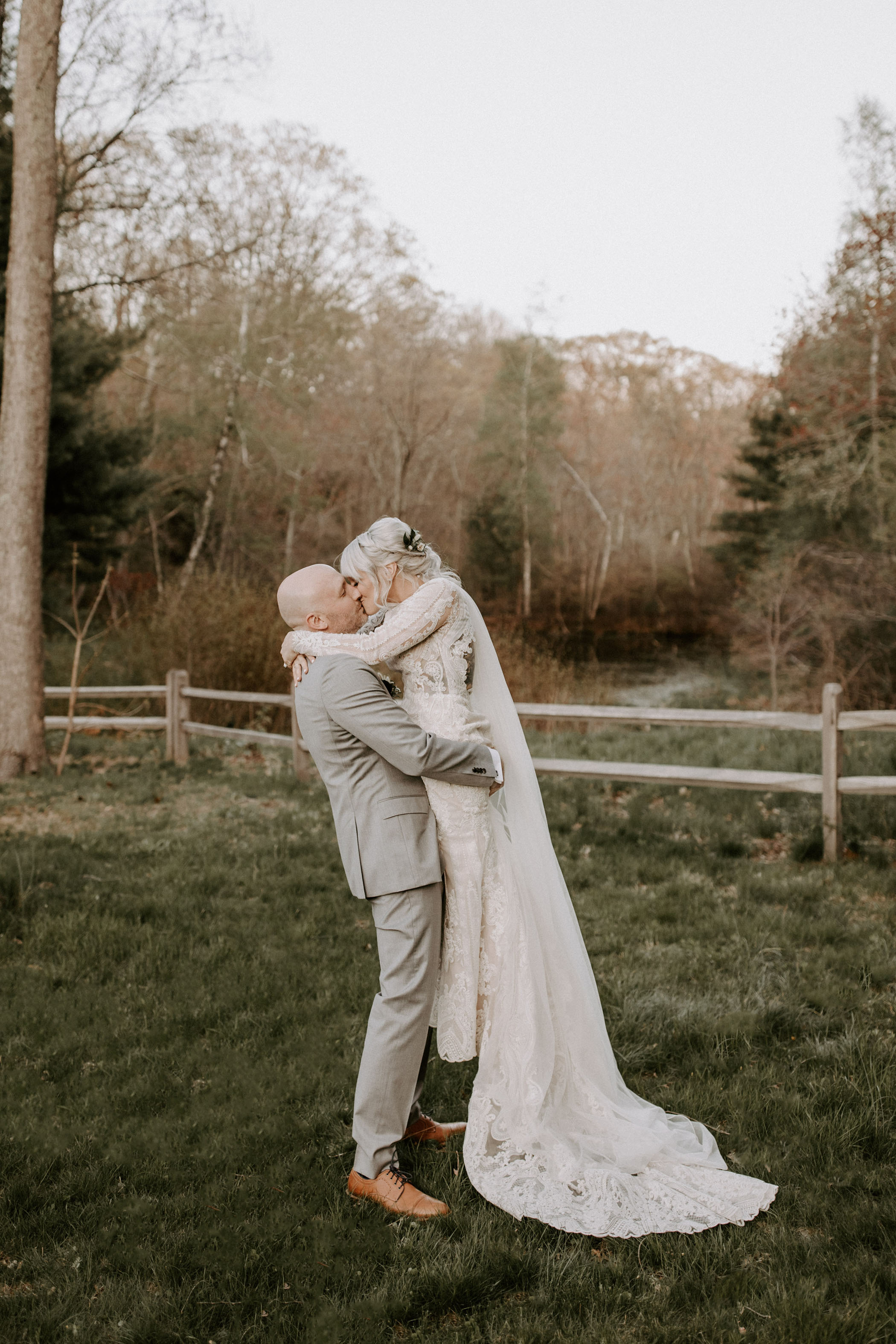 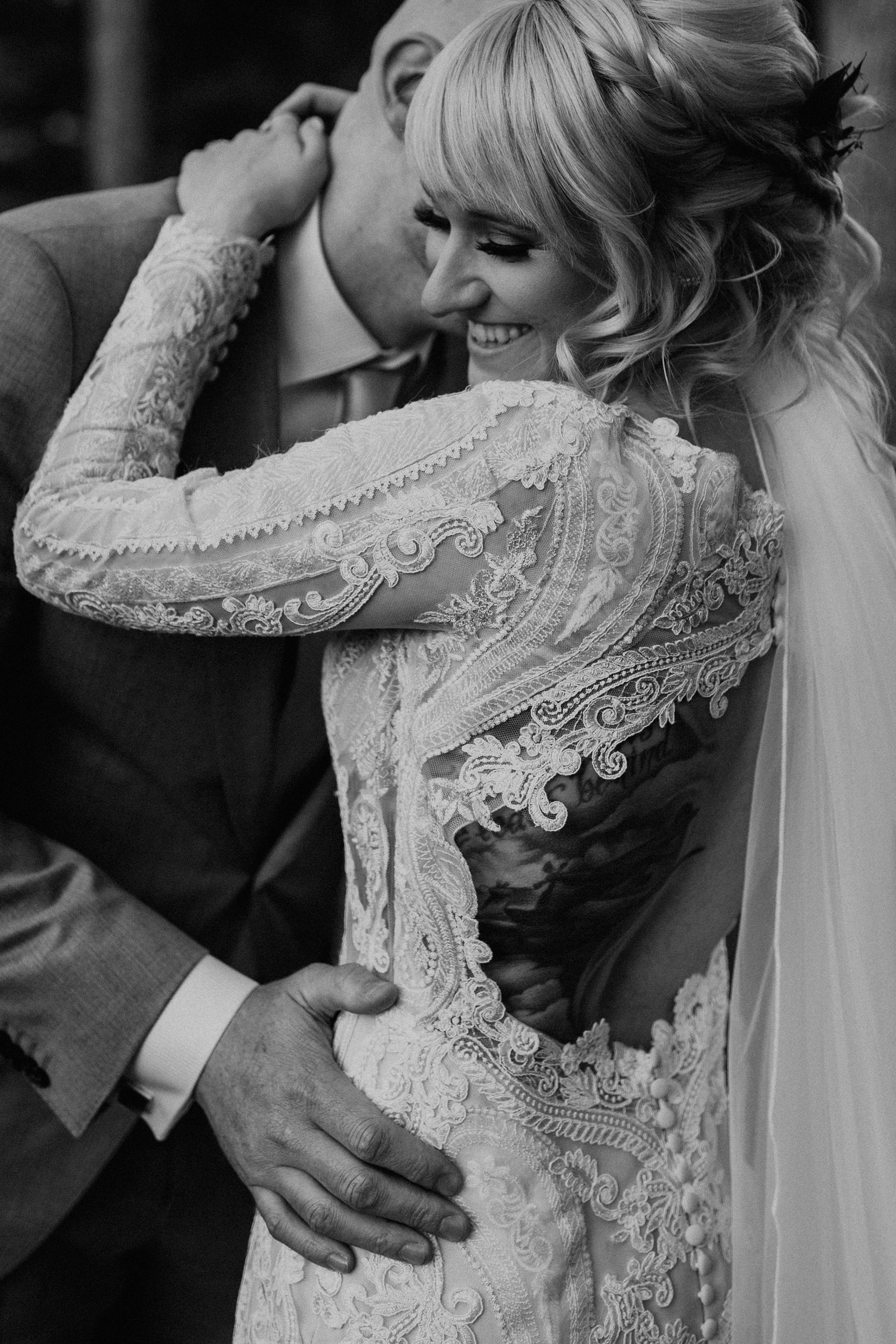 Alesha and Bruce say the inspiration behind their wedding was their shared love of Massachusetts’ North Shore and New England’s natural beauty. “We wanted lots of textured greenery, mixed materials, like metals and wood, and varying shades of Atlantic blues, greens, and grays. We both love great hospitality and the warmth and joy it can bring to others, so we wanted our wedding day to be one our guests remembered for being intimate and welcoming, yet still beautiful and elegant. Especially being one of the first weddings many of our guests attended post-pandemic,” says Alesha. 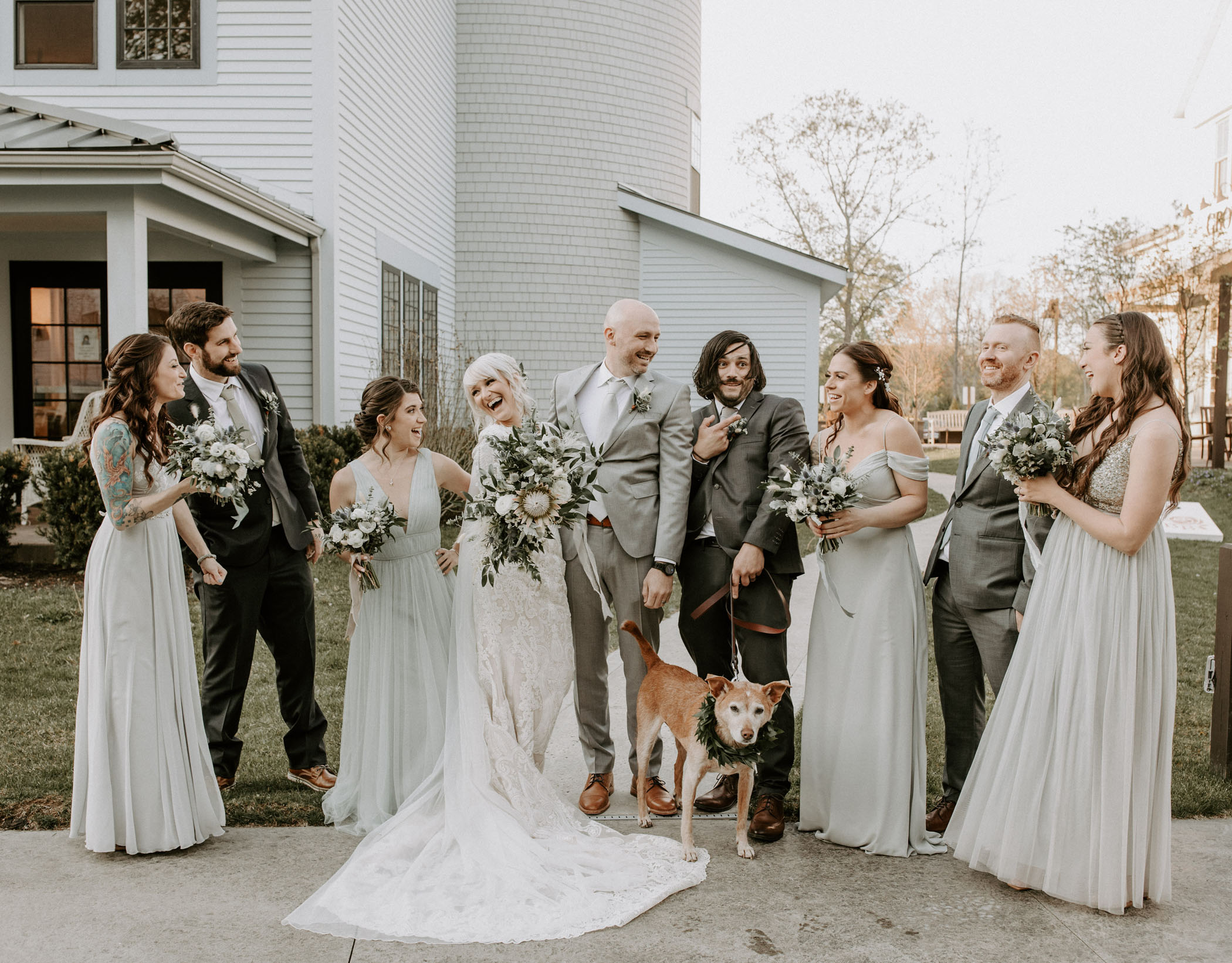 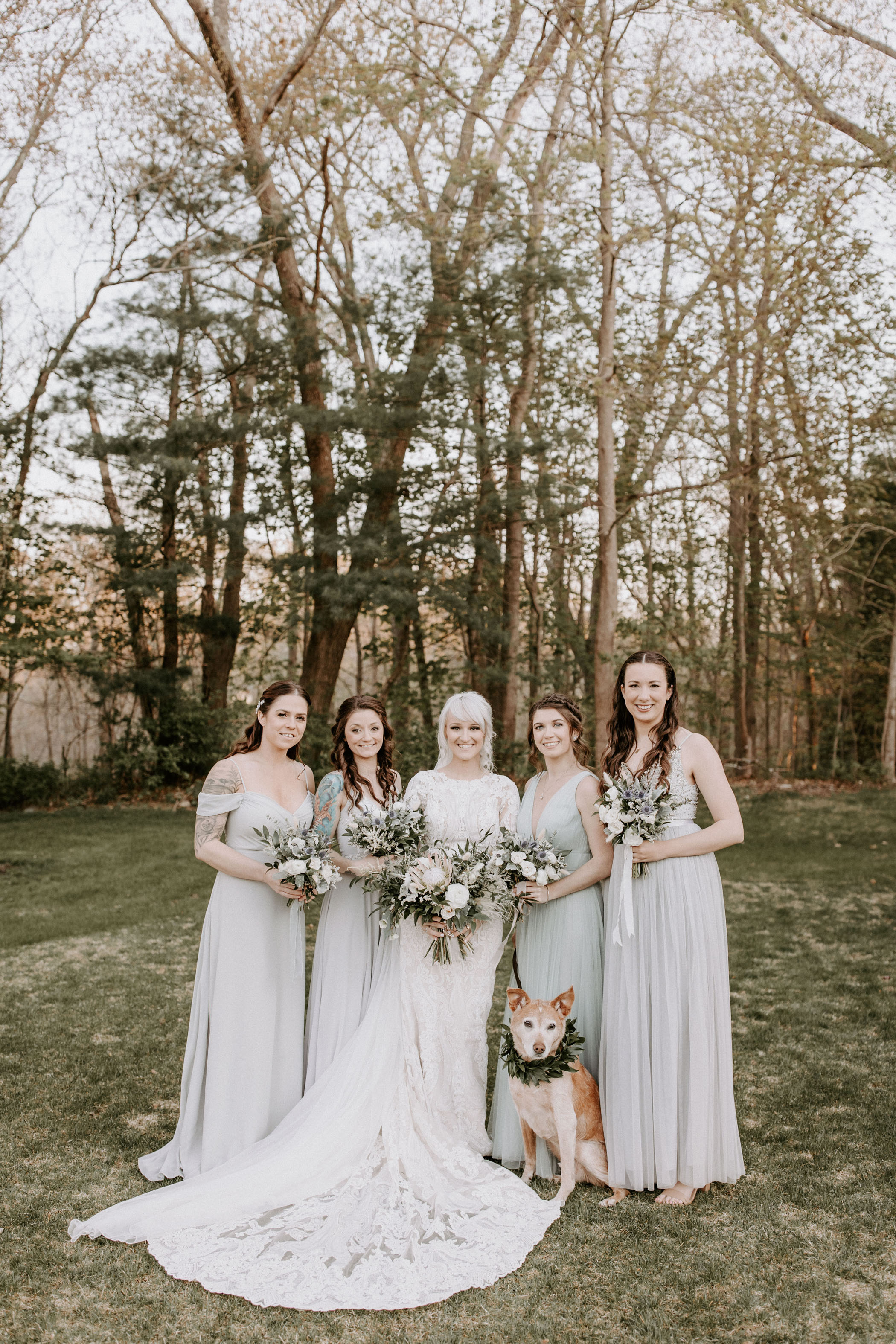 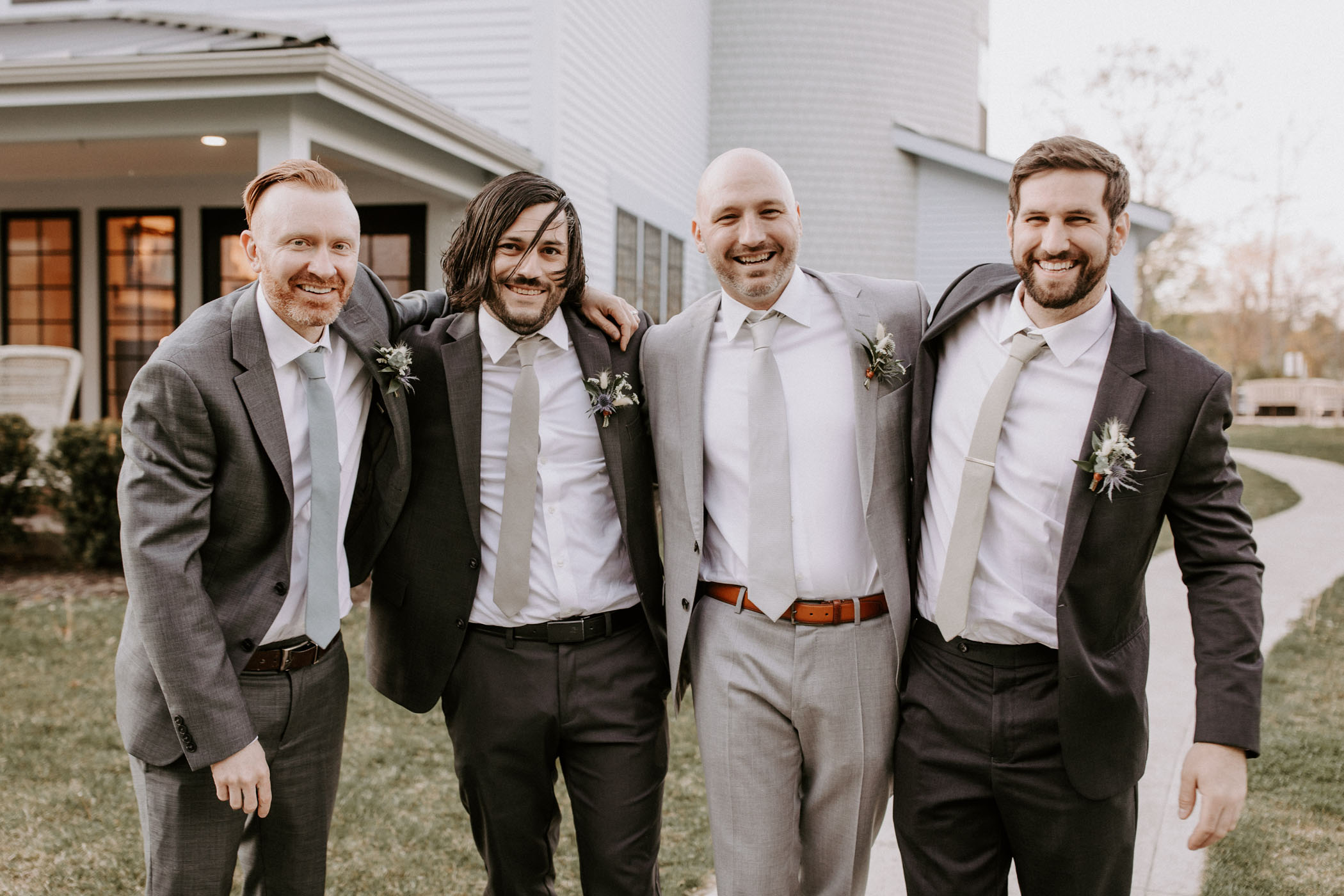 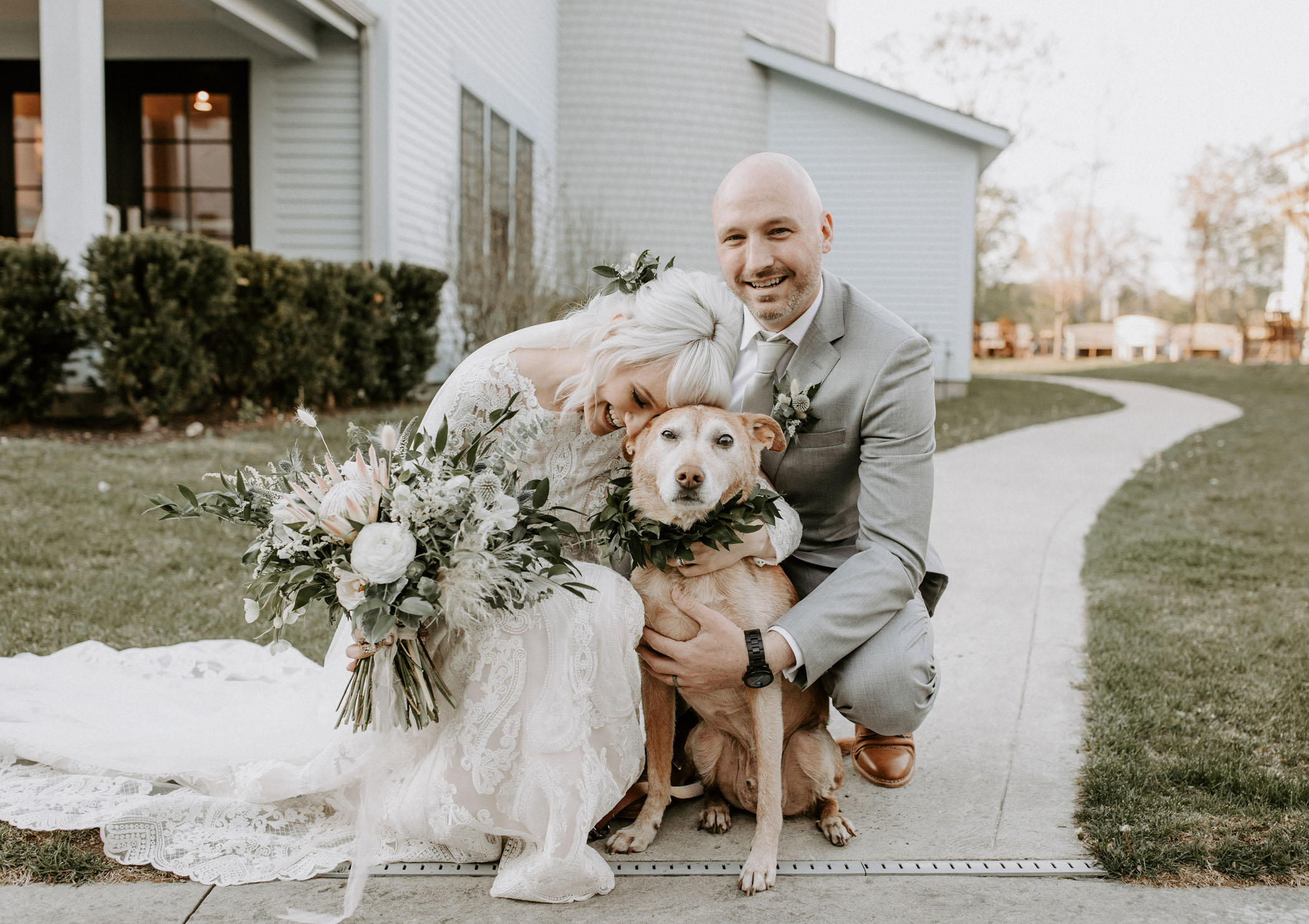 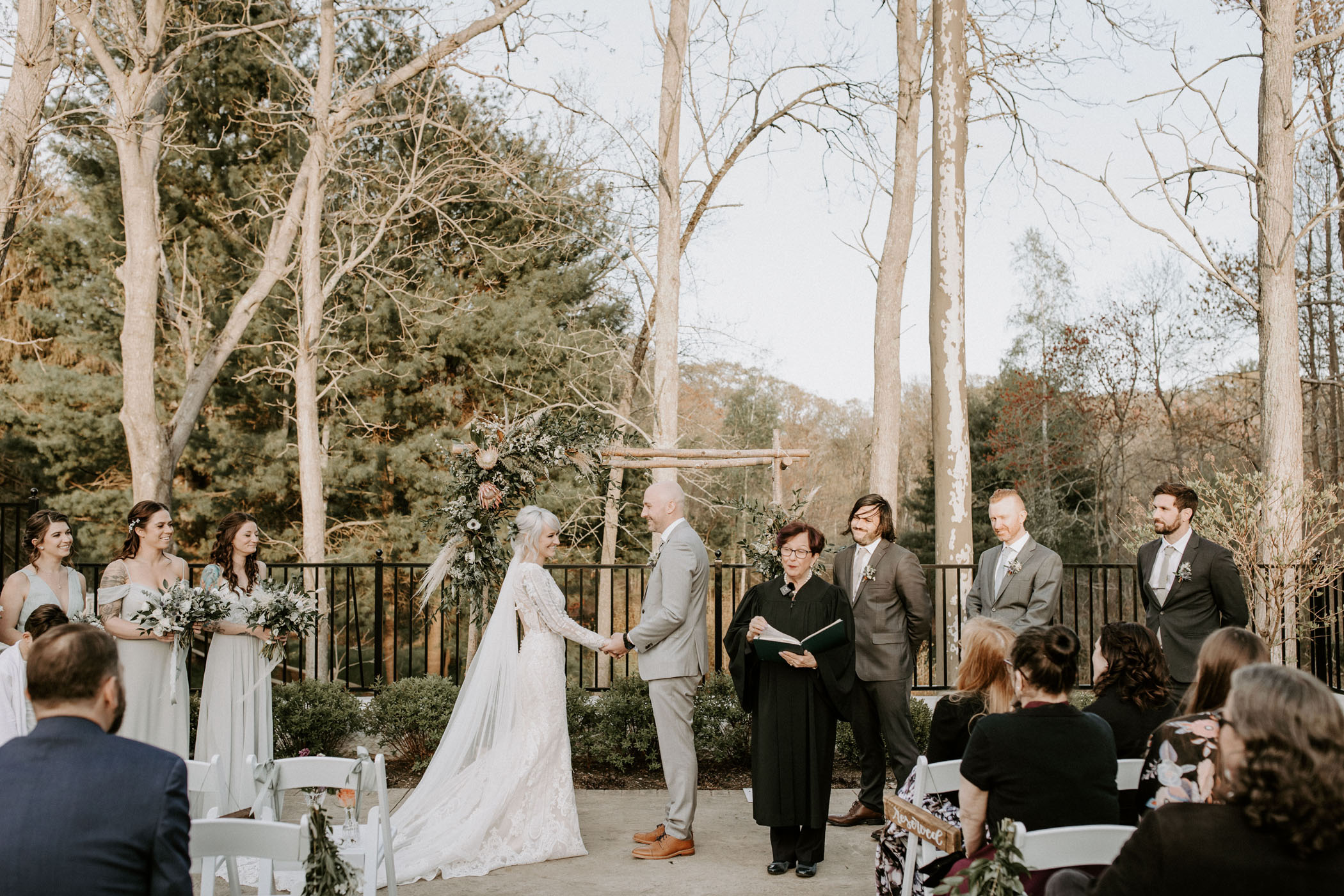 First Dance: I Will Follow You into the Dark by YUNGBLUD & Halsey 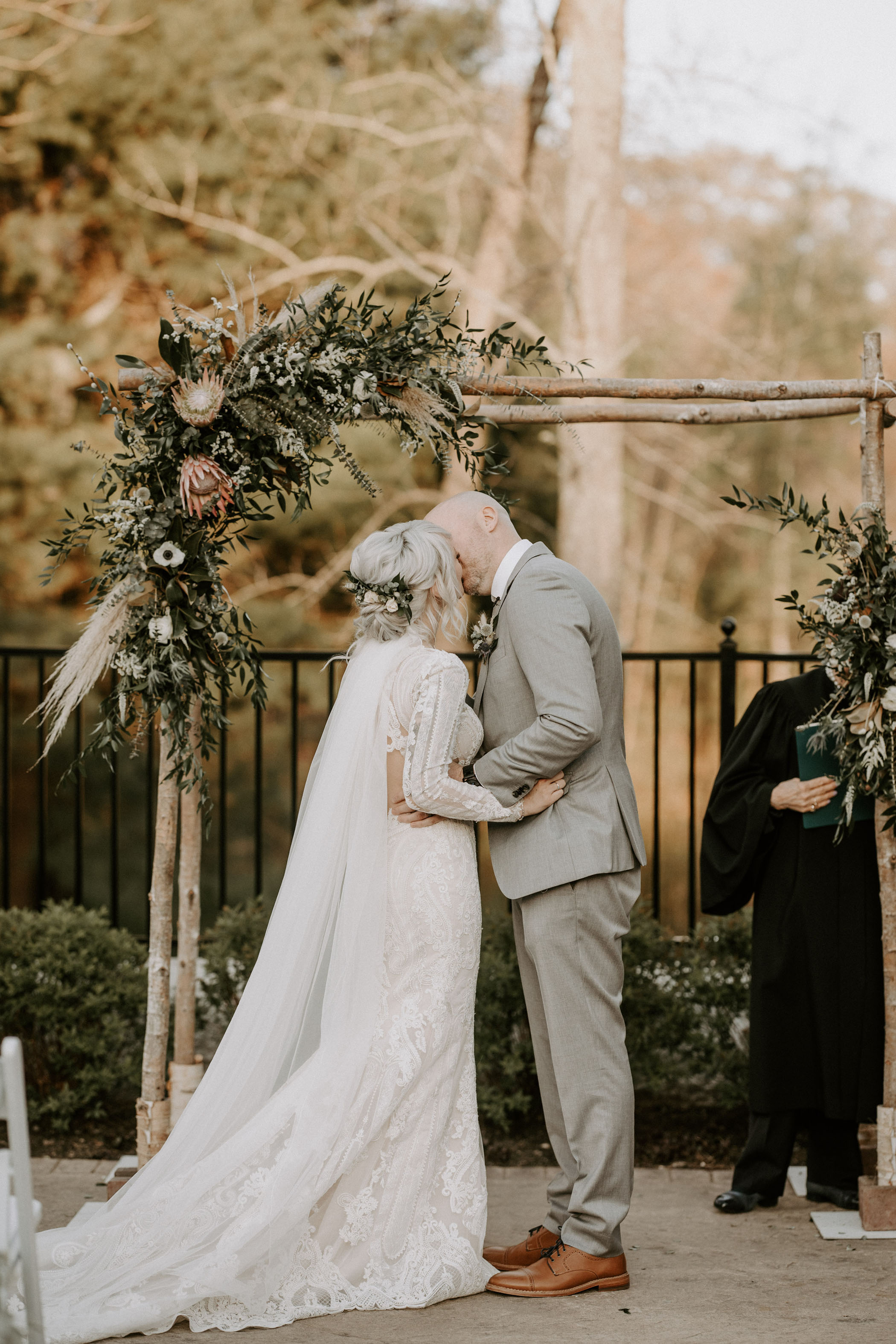 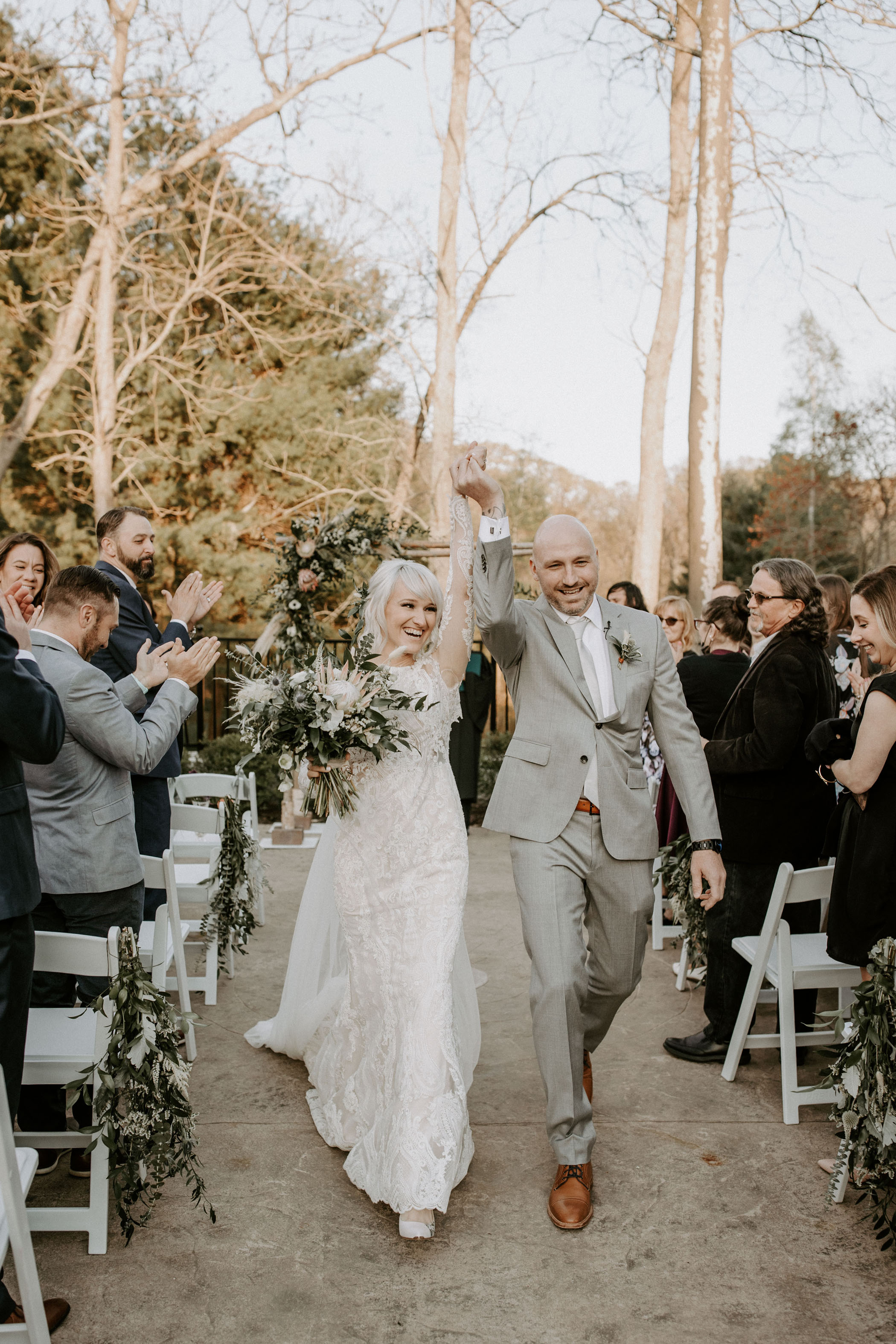 Don’t fret over the little things that may (and will) go wrong. Even the most perfectly planned day can change in a moment. Trust in your vendors, your partner, and your wedding party. Your day will be exactly how it was meant to be. Cherish each moment, because it goes by just as fast as everyone says. Oh, and if you’re on the fence, get the videographer :) 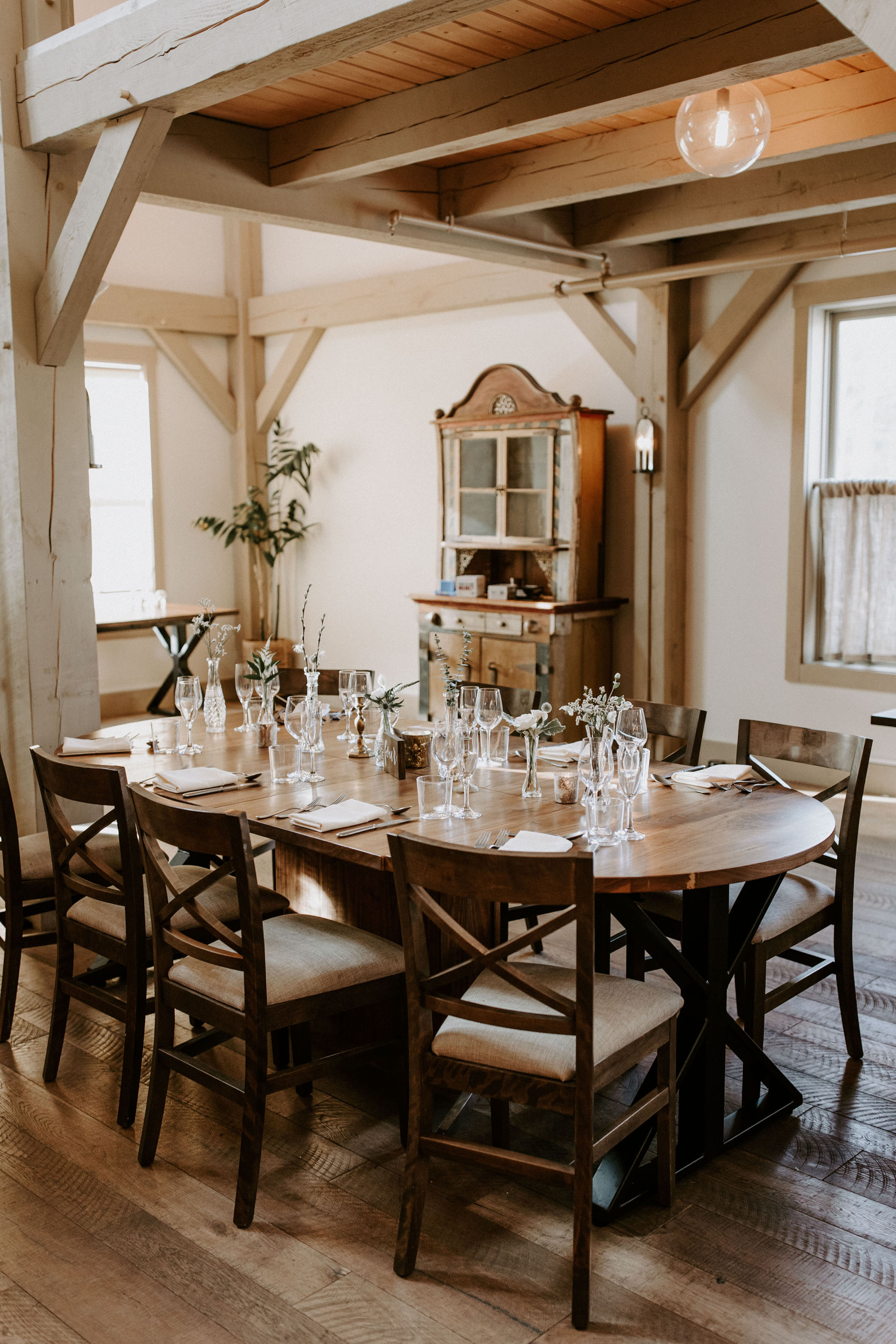 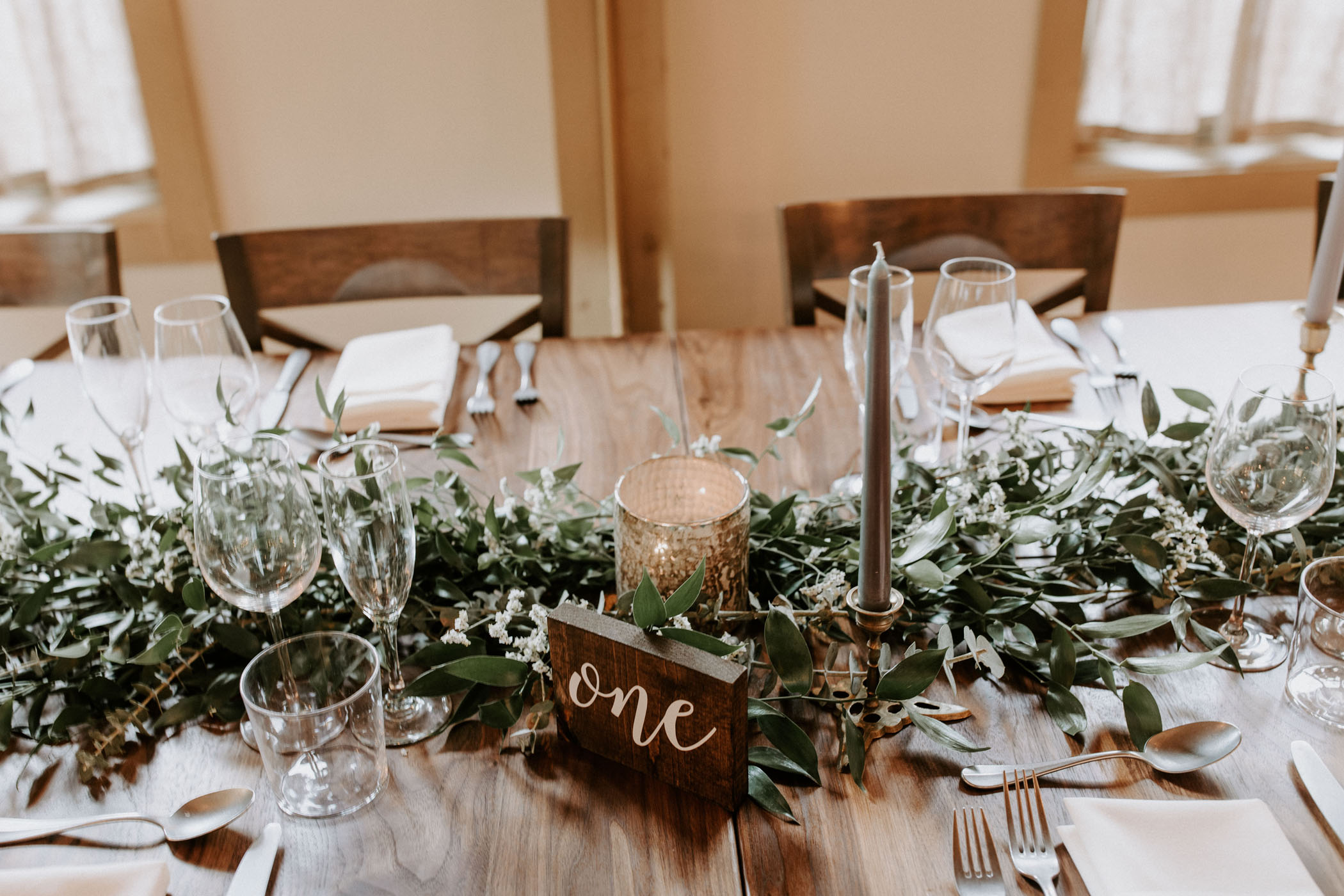 At the end of the night, a three-tiered nearly-naked frosted cake adorned with fresh greenery, thistle, and roses was cut and served.

And don’t miss their film below by Beabout Exposure