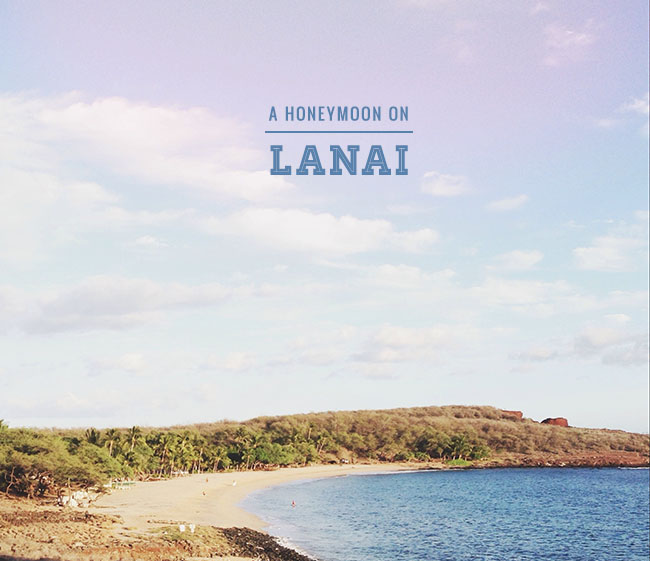 Last week we shared our trip to Maui and the brand new Andaz Hotel. After spending 5 wonderful days there, we drove up the coast to Lahaina and hopped a ferry to the island of Lanai, which we now call the lovely hidden gem of Hawaii. On the ferry ride over, we were greeted by a school of dolphins swimming with the ferry – like they were guiding us to Lanai, so fun!

A bit about Lanai….it’s the sixth largest Hawaiian island with a population of just over 3,100 and since it’s just a short 45 minute ferry ride from Maui, it makes a fun excursion if you’re already planning to visit Maui. Lanai isn’t as well known as some of the other Hawaiian islands, but we think that’s going to change over the next few years. Here’s a fun fact, 98% of Lanai was recently bought by Oracle CEO Larry Ellison (Jason was excited to learn this) and the state owns the remaining 2 percent. Ellison reportedly plans to invest as much as $500 million to add to and improve the island’s infrastructure and to create an environmentally friendly agricultural industry – so lots of new things happening for Lanai in the near future!

As for visiting Lanai….if you are looking to really get away from it all – Lanai is the island for you.  From the minute you step ashore, it feels like you’re on a private island. There are only 3 hotels on the island. One hotel on the beach (Four Seasons Resort Lanai at Manele Bay), one in Lanai City (Hotel Lanai – only 11 rooms here), and the last is in the mountains (Four Seasons Resort Lanai, The Lodge at Koele). So, 3 very different hotels for you to choose from. We just love Hawaiian beaches, so we chose to stay at the Four Seasons Resort Lanai at Manele Bay. It’s right on the beach (yep, the gorgeous beach above!) and also has a great pool overlooking the water.

You won’t need to rent a car on Lanai, as there are only 30 miles of paved roads (unless you want to go off roading, more about that later) – plus, if you stay at one of the Four Season resorts they have shuttles to take you from one resort to the other and into Lanai City. Upon arriving at Lanai, we were greeted by a bellman from the Four Seasons and taken on a quick 10 minute drive to the resort. 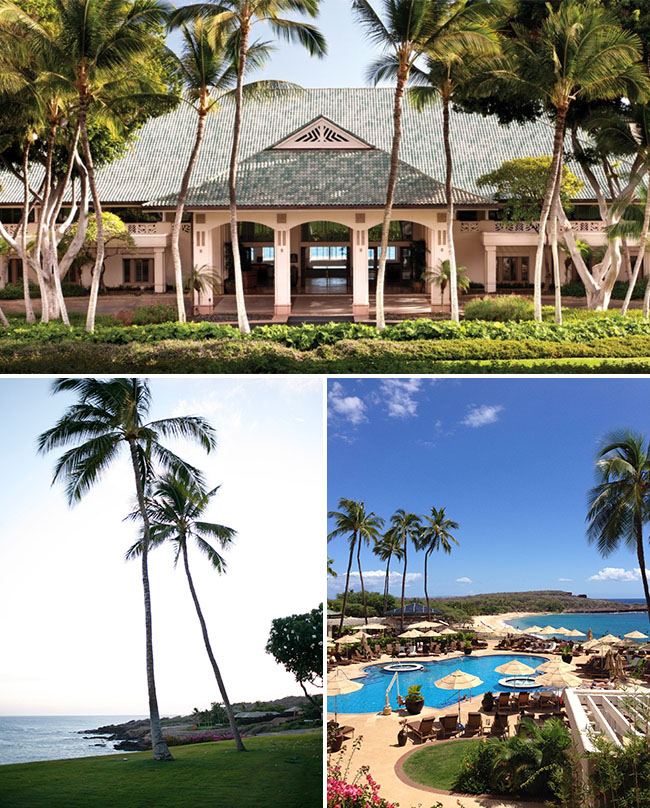 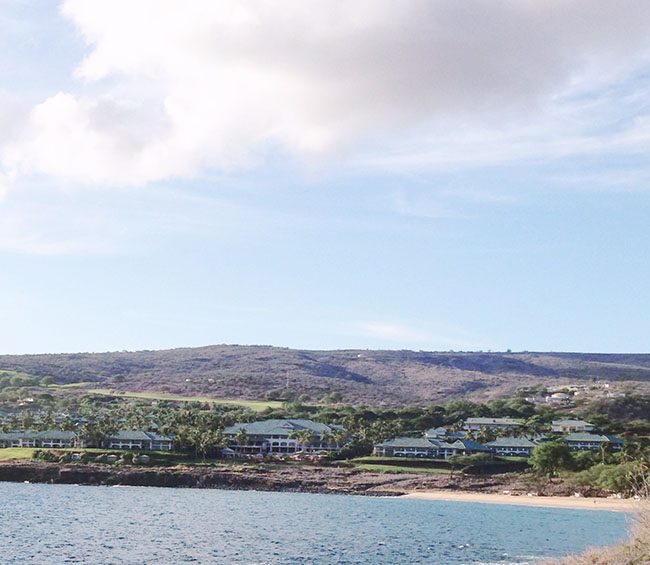 The Four Seasons Resort Lanai at Manele Bay has some really great restaurants. The first night we were treated to dinner at Nobu to celebrate our 5th anniversary. I’ve heard amazing things about Nobu (there is one in Malibu near us, but we haven’t made it there yet), so I was really looking forward to this meal. After chatting with our server, we decided to do omakase – meaning we were going to leave our menu up to the chef.

It was truly one of the best meals of my life! Since we were going omakase, our server asked us a few questions – about spice and what type of sushi we typically like – to determine what the chef should create for us. It was super fun not knowing what was coming next. Below is our first course – the presentation of everything was stunning… 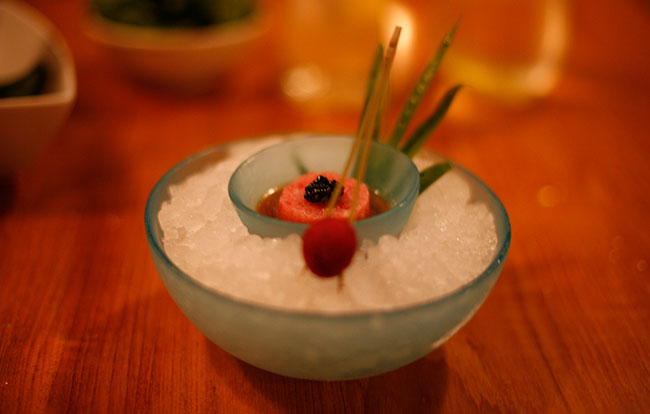 and the restaurant had an insane view… 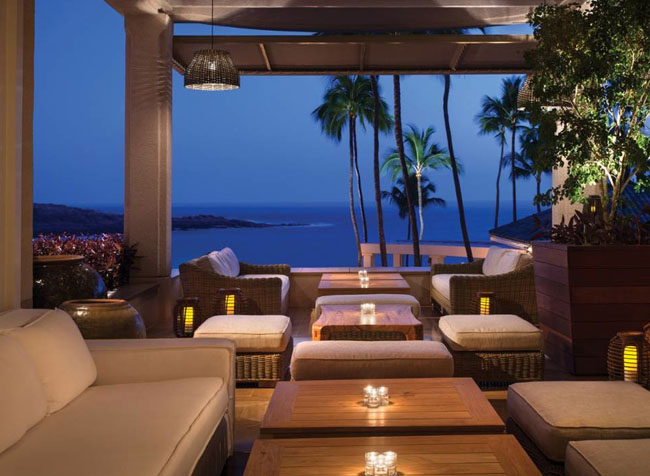 Another fun part about the hotel– you can order Nobu by the pool if you decide that you feel like sushi for lunch or just a snack! Loved that… Another night we did dinner in the Ocean Hale. This was a private cabana for dinner overlooking the ocean. Such a romantic + amazing evening, it felt like we had the island all to ourselves. :) This setting would be perfect if you eloped and wanted a private dinner – or just a romantic dinner if you are there celebrating your anniversary. In addition to the amazing food and view, the Ocean Hale offers a couch for the two of you to enjoy cocktails before and after dinner, and the most amazing binoculars that are powerful enough to allow you to star gaze and even see the craters on the moon! Such a fun evening…it’s tough to decide if we liked the setting or the meal more….both were fantastic.

The last night we took the shuttle up to the other Four Seasons resort – The Lodge at Koele. It is up in the mountains and has a definite, rustic lodge feel that’s unlike any other setting on the island. The resort there is gorgeous also – and a totally different vibe from the beach. Fun to mix it up. We had another amazing dinner and then enjoyed some drinks while listening to music in the lounge there. 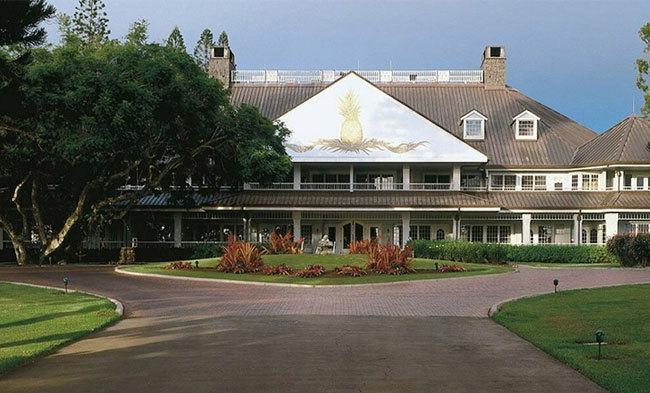 We decided to explore the island one day and took a jeep to check out the remote parts of the island. Since the island only has 30 miles of paved road, 80% of the trip was off road on dirt, gravel, beach and some big rocks in some places. Turns out Sienna loves off roading too! :) We headed out to Shipwreck Beach, stumbled across the abandoned Club Lanai and then the historic Malamalama Church that was recently rebuilt set among the beautiful palm trees – so perfect for a wedding for you brides with a sense of adventure! Although it is really out in the middle of nowhere! Any brides up to the challenge of marrying here, send us your pics :) 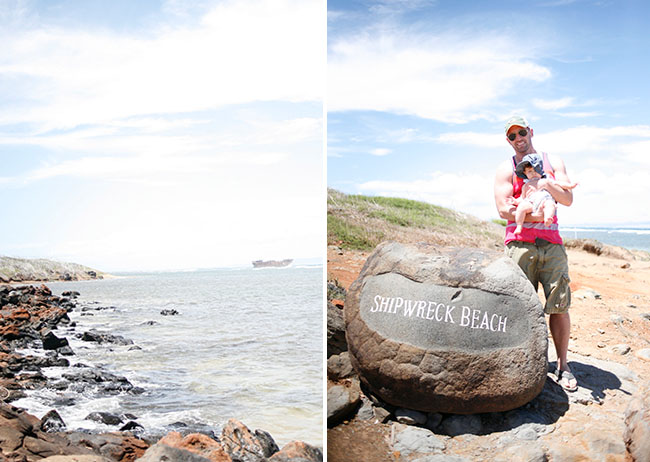 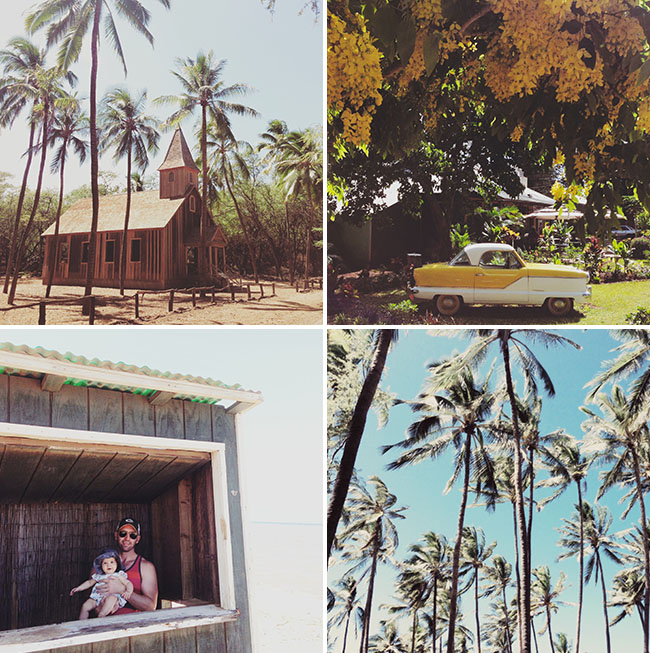 If off roading isn’t your idea of fun, you can access a lot of great activities right from the Four Seasons Resort Lanai at Manele Bay. We took a light stroll out to Sweetheart Rock (seen below), then another along the coast and up to the golf course. Other activities on site include: scuba diving, snorkeling, surfing, golf, spa, kayaking and whale watching. Some lucky guests get to see dolphins when out on early morning snorkeling trips in the bay. 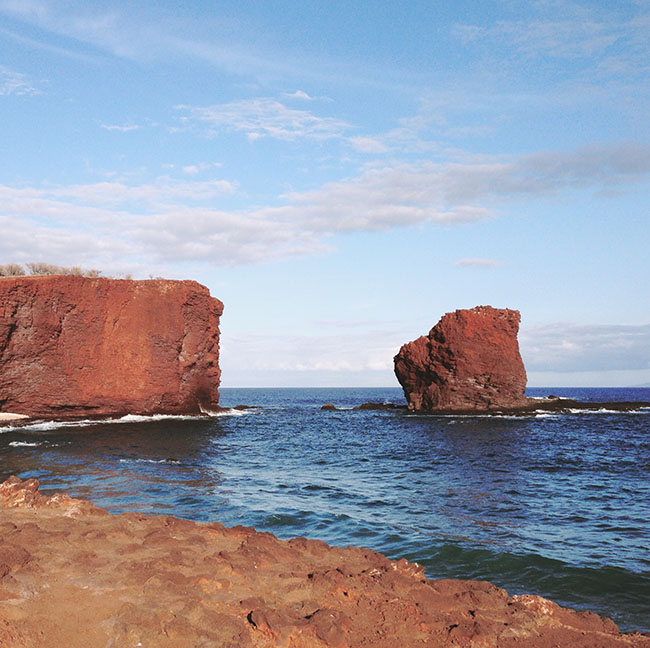 Simply put, Lanai is a relaxing island….it’s very easy to get yourself on island time here. With the great Four Seasons restaurants, fun hikes, and a beautiful beach that is never crowded (they always have a seat for you), it would make a great stop for a honeymoon or anniversary trip (I especially love pairing it with Maui).

You didn’t think we forgot about weddings, did you? We actually hosted a Google Plus Hangout on Air all about weddings in Hawaii and Lanai with the wedding team of Four Seasons Resort Lanai. If you missed our live broadcast, you can watch it below now.

It was fun to talk with Four Seasons’ wedding team about all of their services and fun things they do for weddings. Fun fact (Jason loves this fact too….tech guys on islands:) – Bill Gates was married in Lanai at the 12th Hole. :) Thanks again to Hector and Allison for sharing your stories! If you are looking to get married in Lanai, you will be in great hands!

Thinking of visiting Lanai? Big thanks to Katie at Ever After Honeymoons for helping us book our stay here. If you are interested in going to Lanai, I definitely recommend working with Katie as all her clients receive complimentary breakfast daily, a $100 spa credit, and a room upgrade if available at check in! :)

Learn more about the island at Four Seasons Resort Lanai at Manele Bay and if you’ve visited Lanai yourself, we’d love to hear your thoughts and stories in our comments below :)