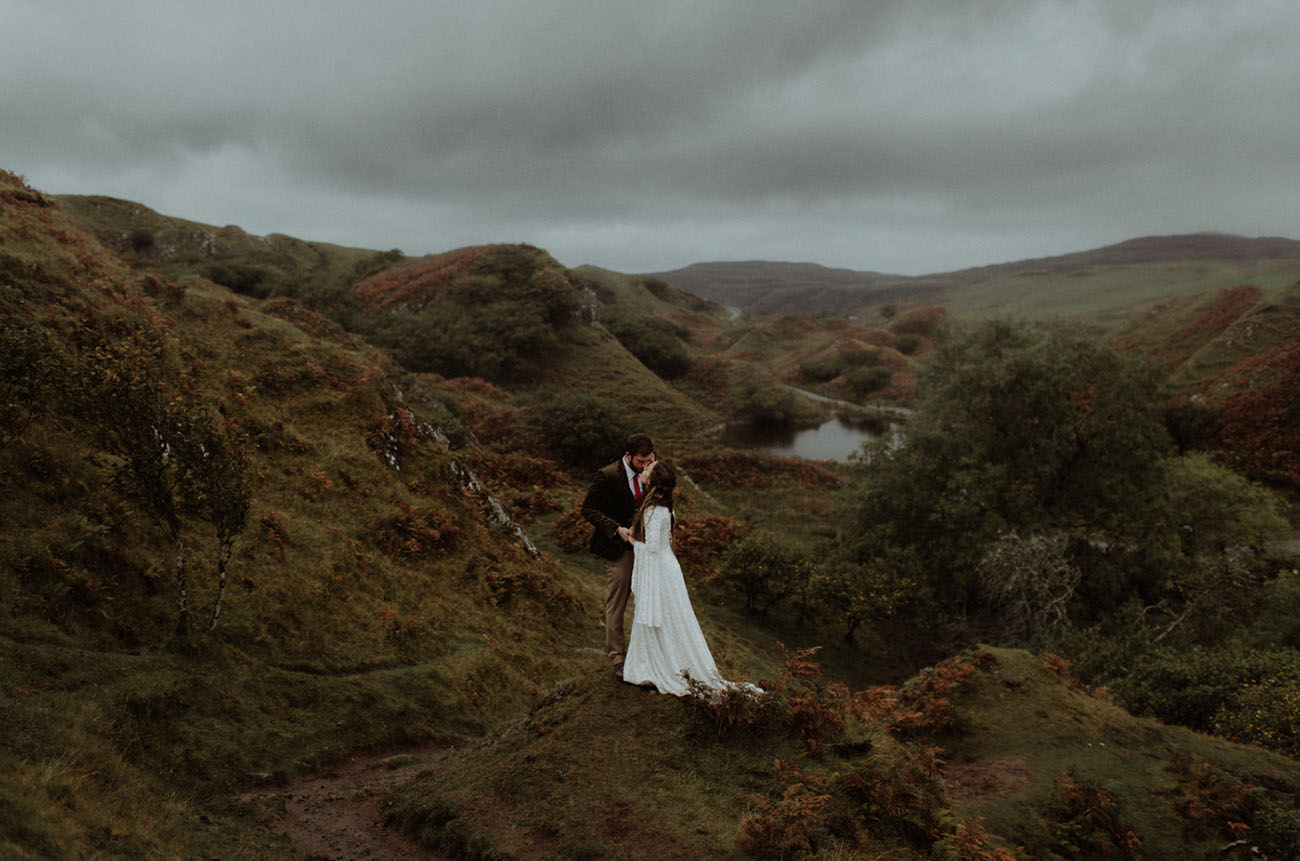 My friends, you might want to grab a tissue or handkerchief for this one… because it’s an emotional tearjerker. Nicole never dreamt of having a traditional wedding, and after the loss of her sister a few years ago, she couldn’t imagine the day without her. Our hearts poured out to Nicole as we read her love story with Gustav, and how they ultimately found Isle of Skye in Scotland — because of N’s sister.

Here’s Nicole with the backstory: I searched for places on the Outer Banks of North Carolina, a location very dear to my heart where my family vacationed every summer, but I decided it would be best to find a location of ’emotional neutrality’ for us. I looked at venues in Connecticut and New York, near where we grew up, and venues out in California, where we live now. Each venue felt inexplicably wrong, and I didn’t know if this was because I just hadn’t looked in the right places, or if it was because I still wasn’t really ready to plan a wedding, but something kept telling me that a piece of this whole puzzle was missing, and I didn’t know what it was.

Then one afternoon, I was back online looking at beautiful, fairy-like woodland canyon venues north of LA, but I couldn’t get over the ‘wrongness.’ I said to myself, “Oh screw it, I should just search ‘elopement Isle of Skye.’ At the least the pretty pictures will take my mind off all this.” The images of rolling green ferns, and moody grey skies, and entirely other worldly vistas popped onto my screen… I realized that this search had not been a casual distraction, but rather a moment of brilliantly divine inspiration.

I scrolled through the breathtaking photos (all of which were taken by the fiercely talented photographer team, The Kitcheners), and tears began rolling down my face. This was right. Suddenly I knew, without having to think about it, that it was my sister, Kim, who’d whispered in my ear as I sat there frustrated at my computer. It was she who’d led me to this place. She had been the missing piece every single time I’d tried to picture my wedding. I needed her there, in whatever way she could be. I needed to have the kind of wedding that allowed for all the emotions that would inevitably arise that day, when faced with the fact that she could not be there in body. 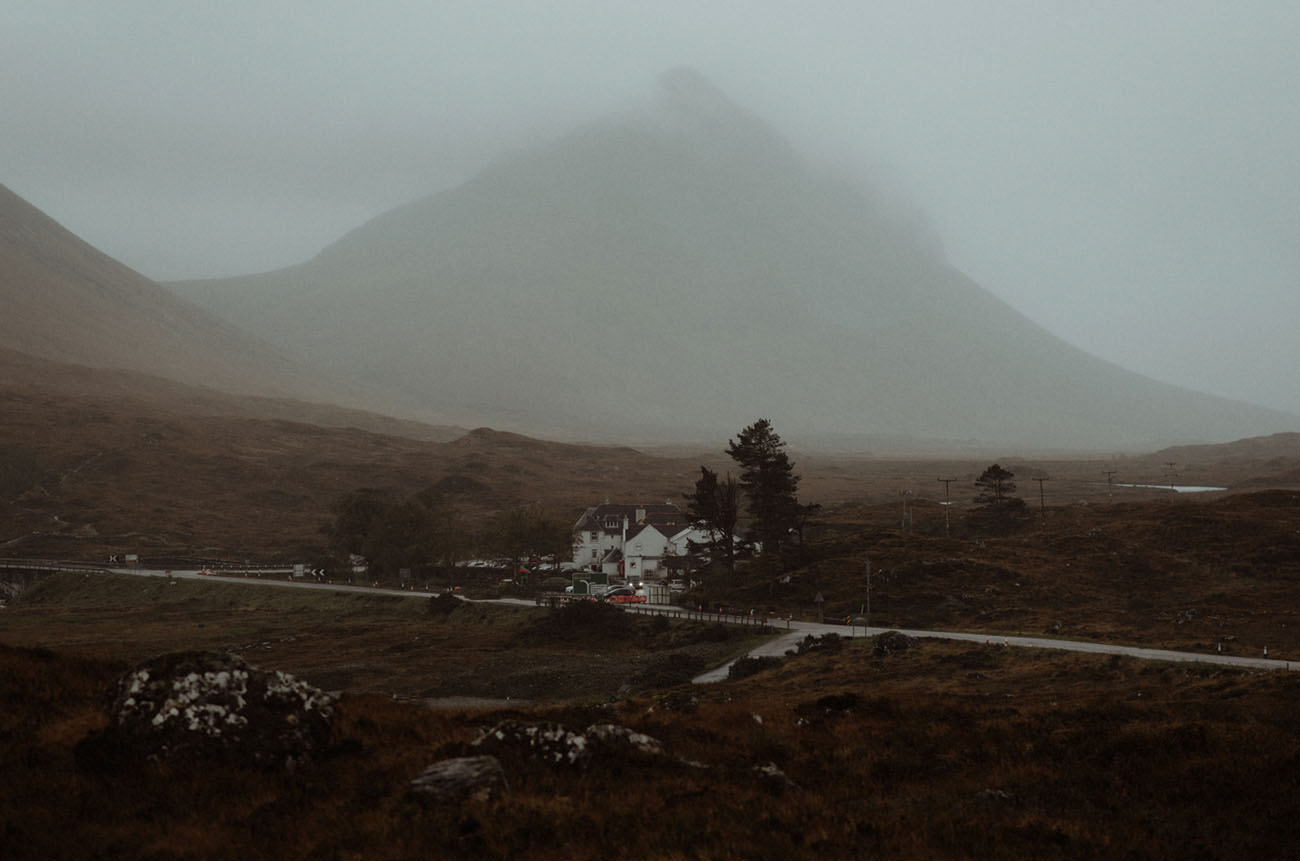 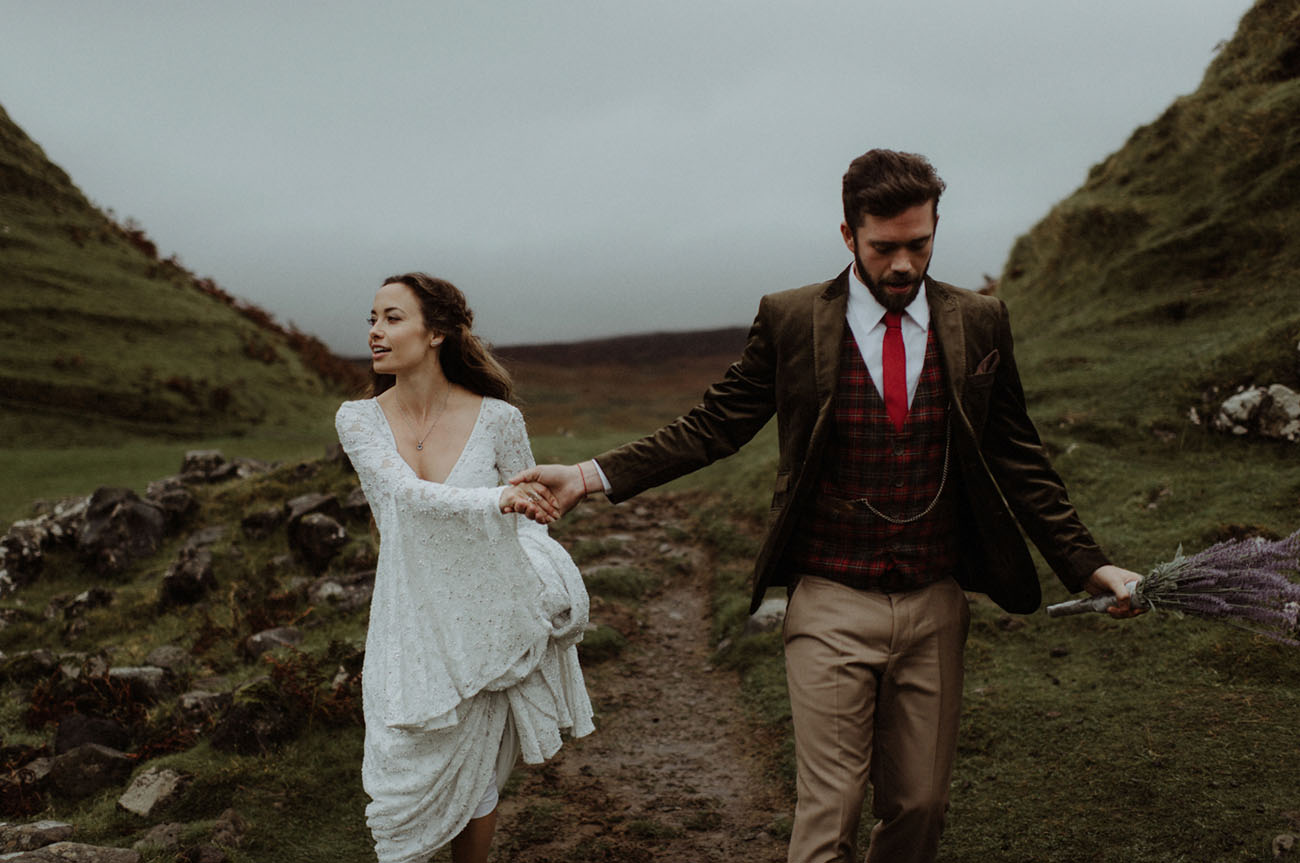 Nicole shares: To top it all off, Kim and I always had a strong connection to fairies (and even talked of getting matching fairy tattoos); as I sat at my computer processing what had just happened, I realized the first photos that had come up in my Isle of Skye elopement search — the photos I fell in love with instantly — were those The Kitcheners had taken in a tiny area of the island named none other than Fairy Glen. It was magic, pure and simple and undeniable. It was Kim. It was right. I sent the images to Gustav, and he said he couldn’t think of a better way to start our life together. And so the Isle of Skye wedding in Fairy Glen was set in stone, as it had been in the stars, and I felt at home with Gustav, and with Kim, in all of it. 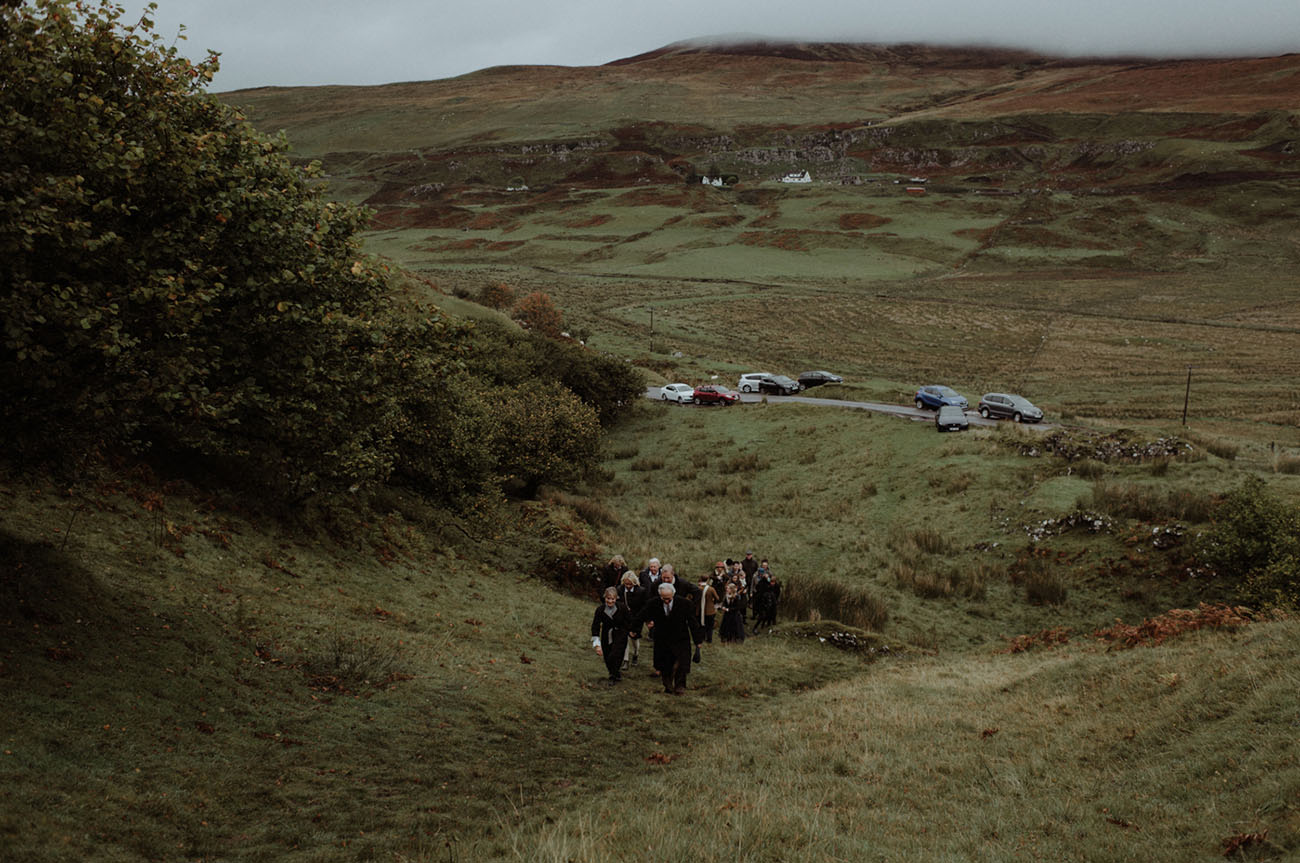 One of the most memorable moments of that day was seeing our families come over the top of the hill into Fairy Glen — seeing them see us and the glen for the first time. No one except Gustav, our minister, and myself had actually been to Fairy Glen (we'd taken the 30 minute drive from our hotel the day before to pick the exact spot where the ceremony would take place), so it will thrilling to watch the looks on our family members' faces as they took in the other worldly scenery for the first time.

Both of our mothers were crying as they saw us standing there together, so that definitely tugged hard on our heartstrings. See, we'd decided at 1am the night before that instead of setting everyone up at the ceremony spot and having me processing into the glen, we'd have our families come up to us; "come into what you two already know to be true," as our wonderful minister, Mark, put it.

This last minute decision came because I just kept feeling uneasy every time I thought about processing in the typical fashion, and I finally realized that this was largely because my sister wouldn't be proceeding me in the processional, so the whole tradition felt wrong. Since Gustav had been my rock since my sister's passing, and because we'd planned this crazy adventure wedding together and our families knew little of what to expect anyway, we decided it just felt right to start out standing there together, supporting one another as we watched our families take in the beauty of the glen, and the enormity of what we were creating that day. It was a really, really special moment. 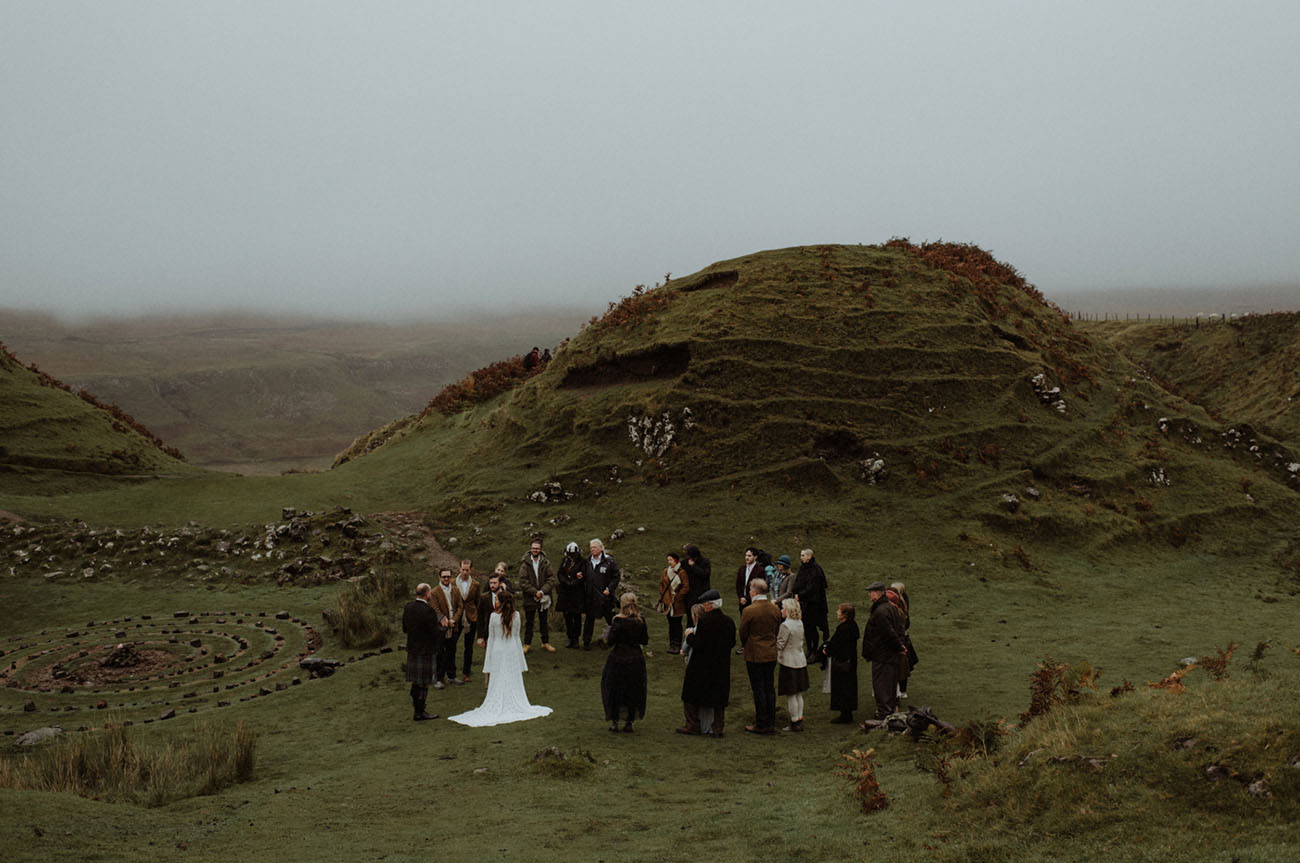 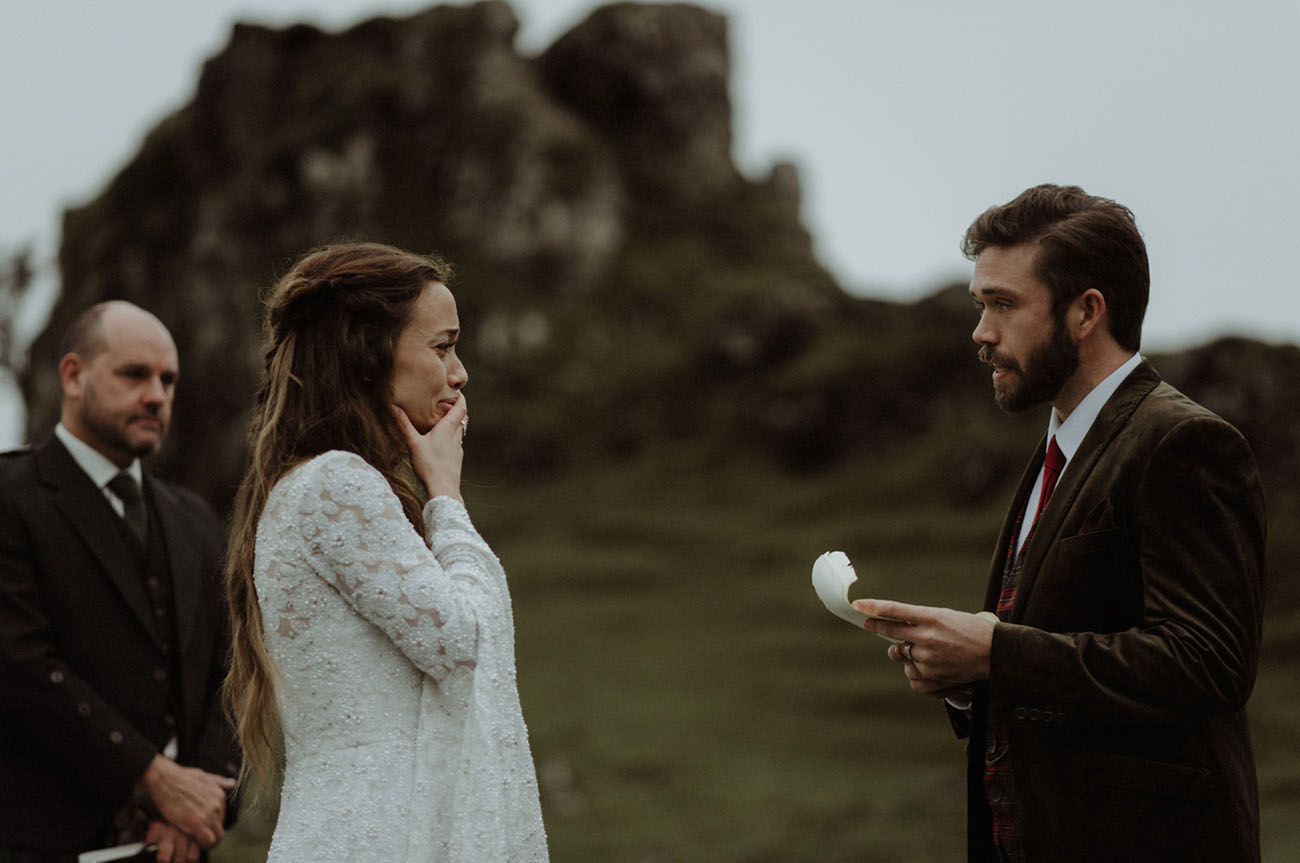 Gustav and I had two extended conversations over wine and dinner in the months leading up to our wedding about what we felt we needed and wanted from each other, and what we felt we could honestly promise each other in our marriage. We even took the 5 Love Languages test during one of these conversations, which was really illuminating in its own right. 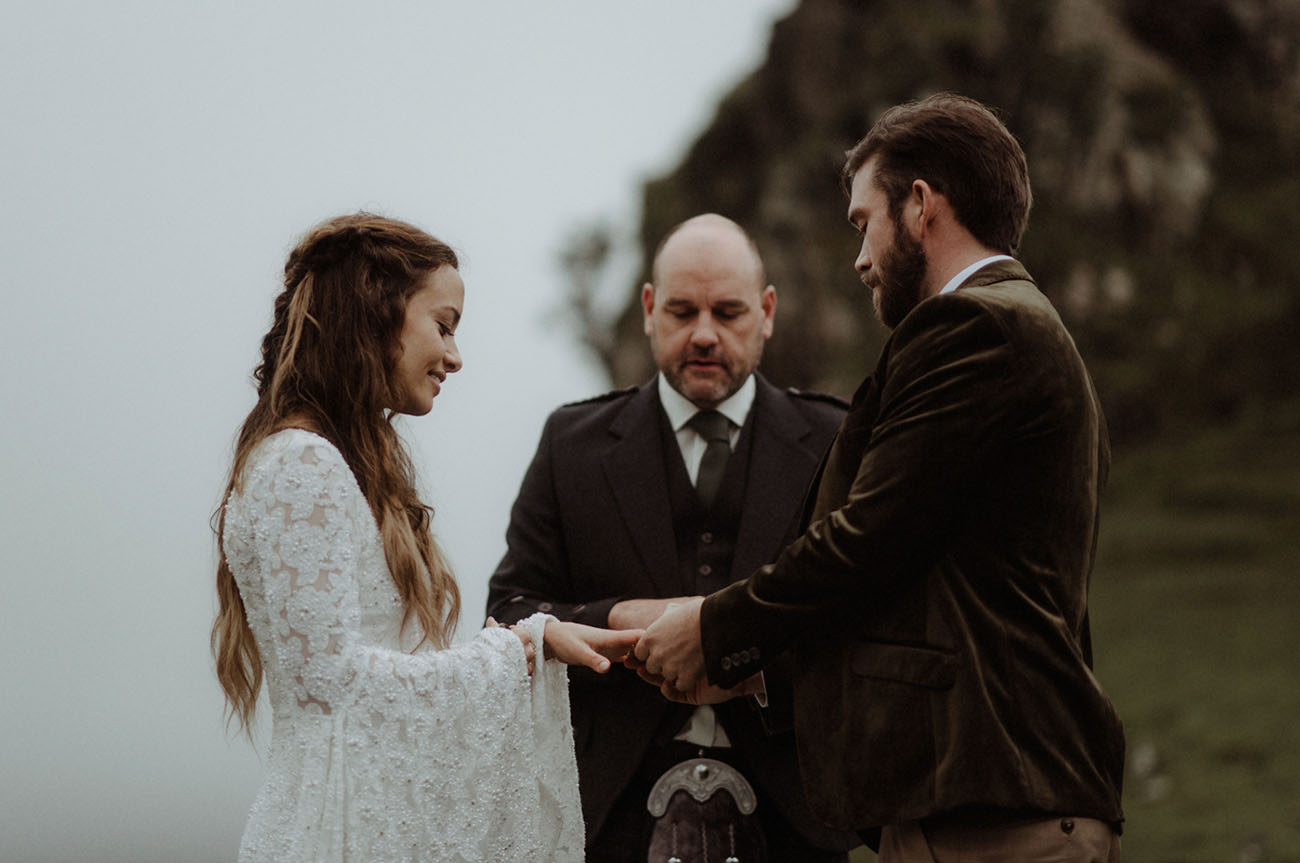 Everything we discussed in these conversations ended up being the basis for our vows, so when we stood across from each other on our wedding day, we knew exactly what the other one needed to hear, and what we had mutually agreed that we could give one another over the course of our lives. This led to vows that were a great mix of romance, practicality and partnership. Having those pre-vows conversations was a very powerful, important exercise for us, and I would highly recommend it to all couples out there. 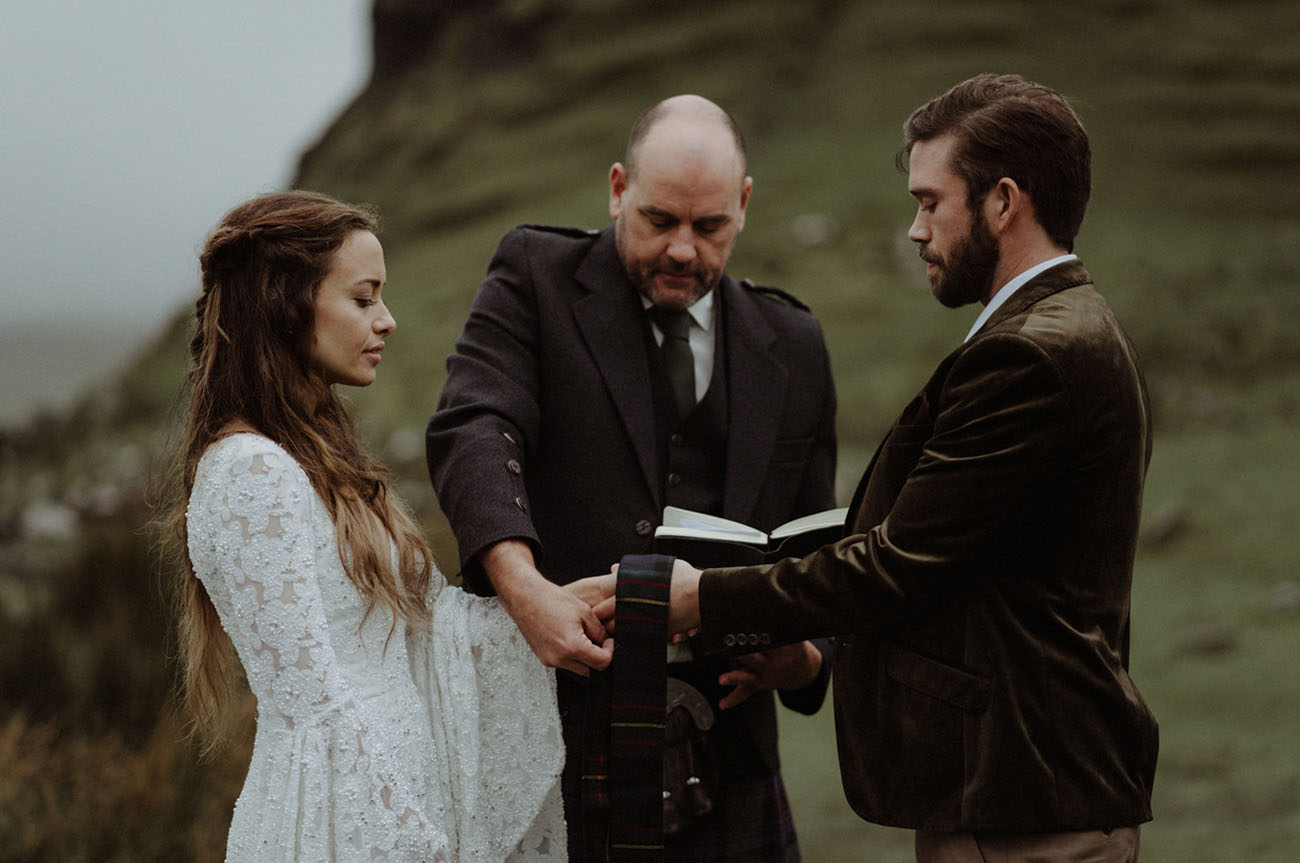 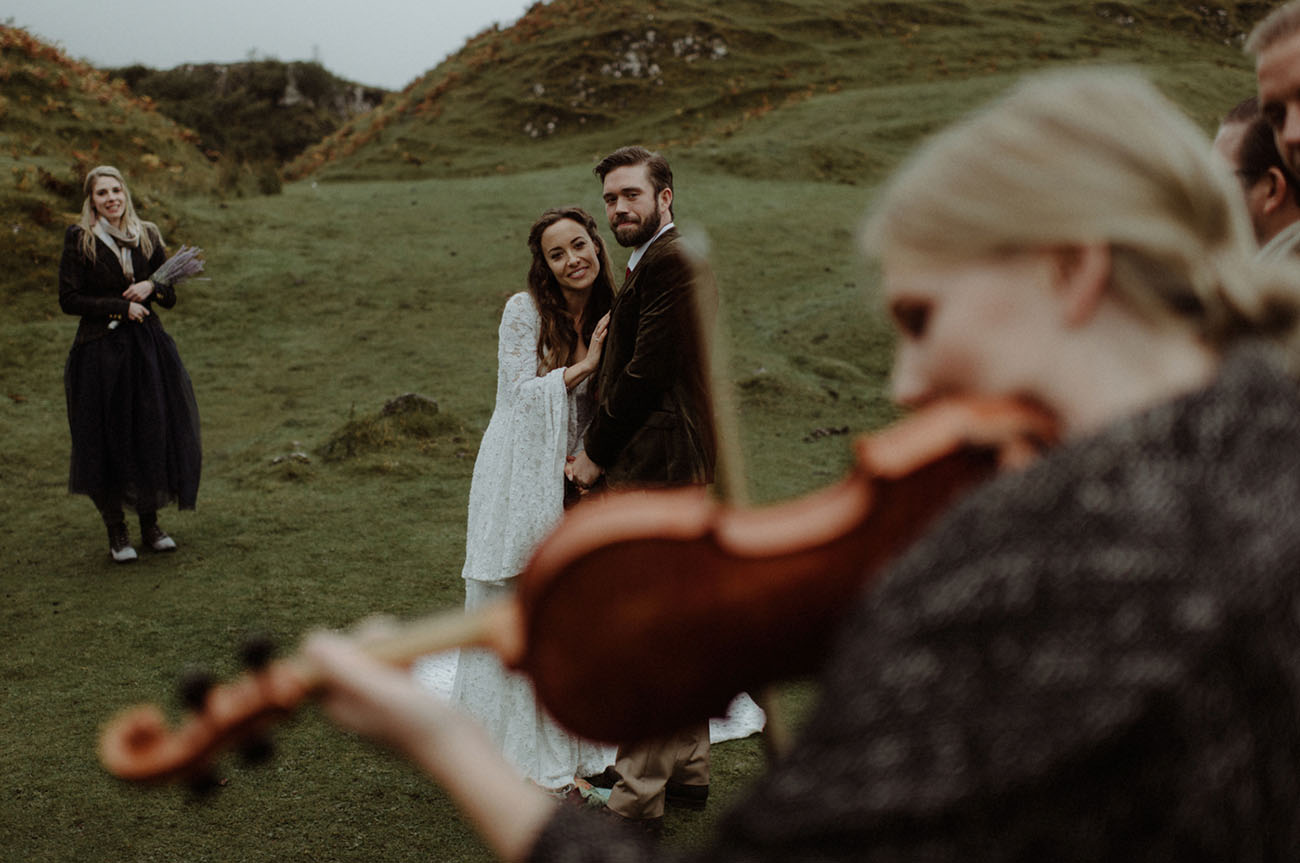 Recessional: Valsen Till Mig by Sofia Karlsson, played on violin by their friend, Hannah 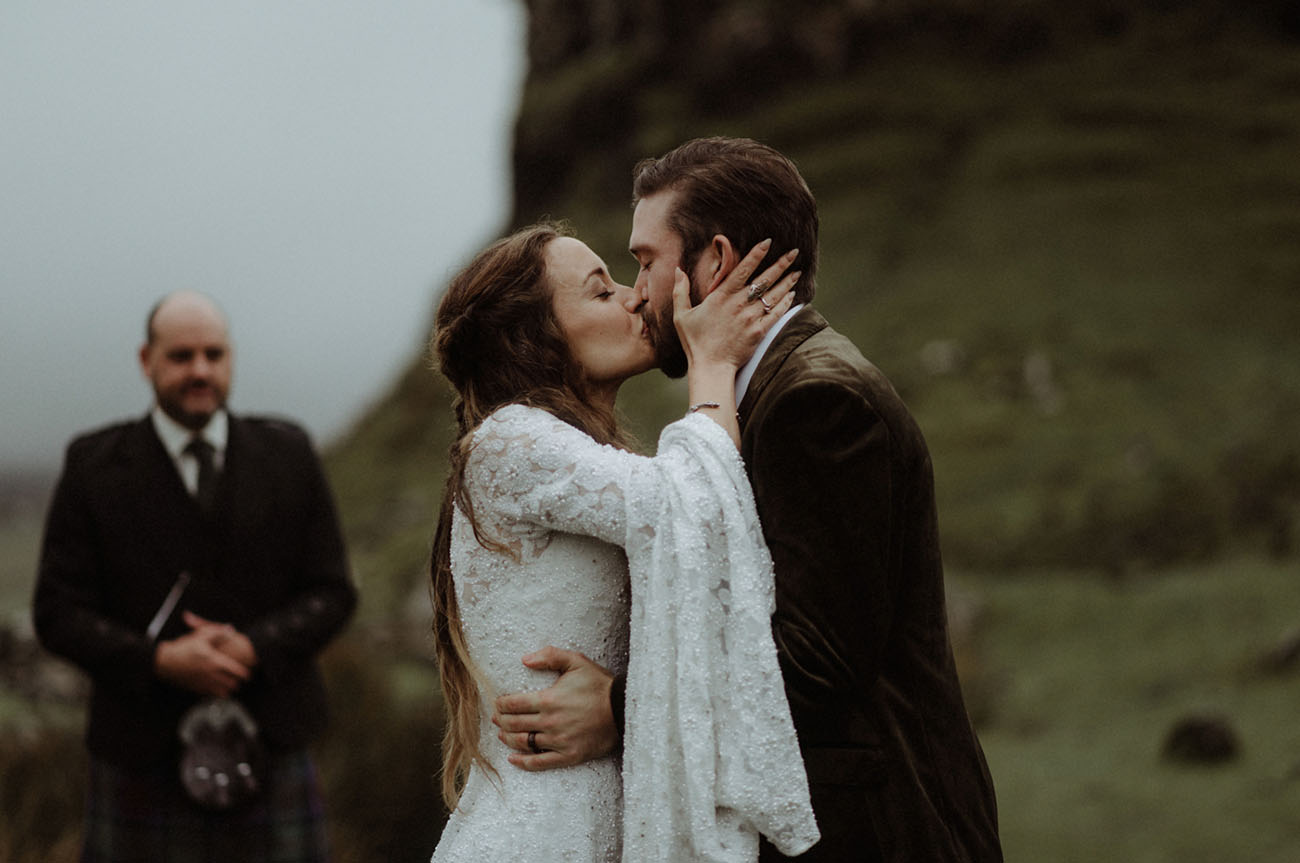 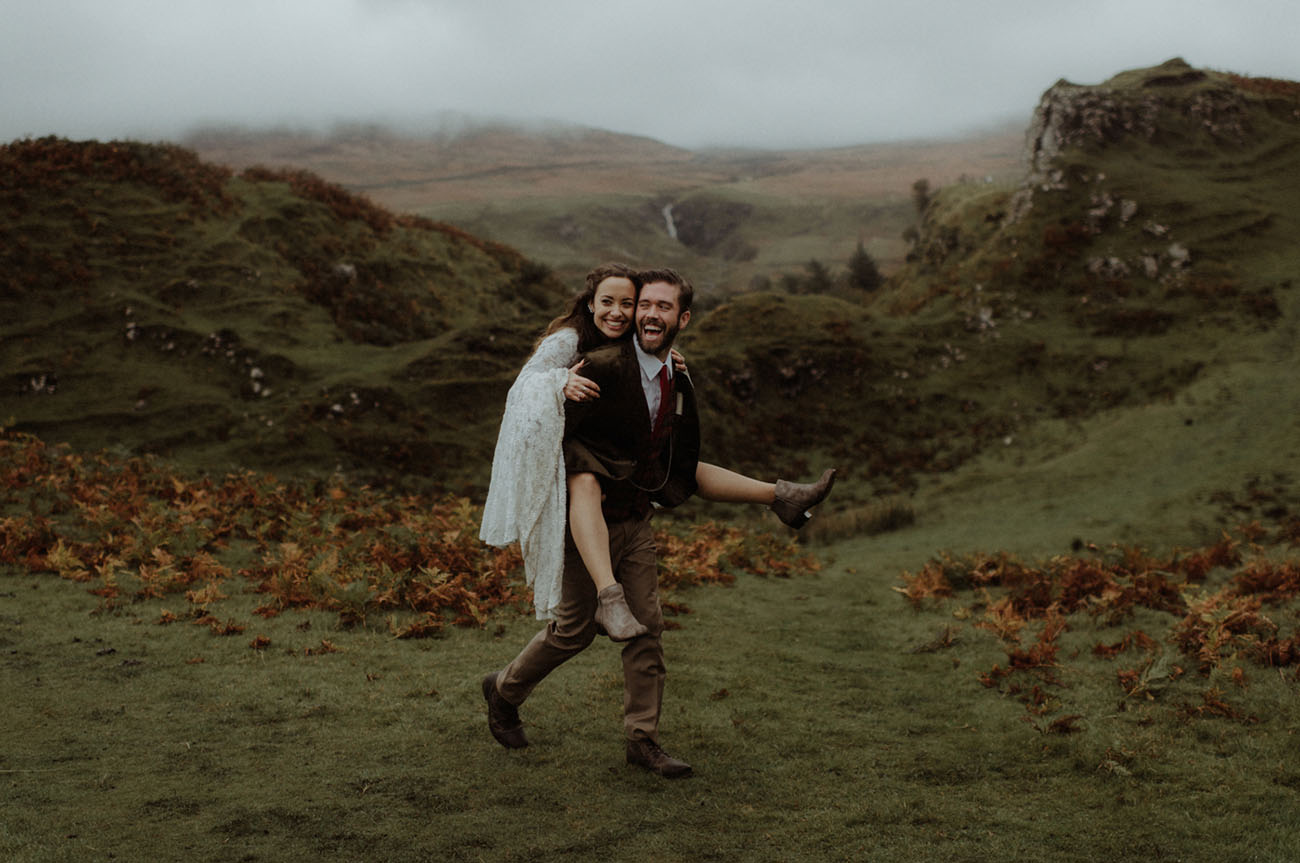 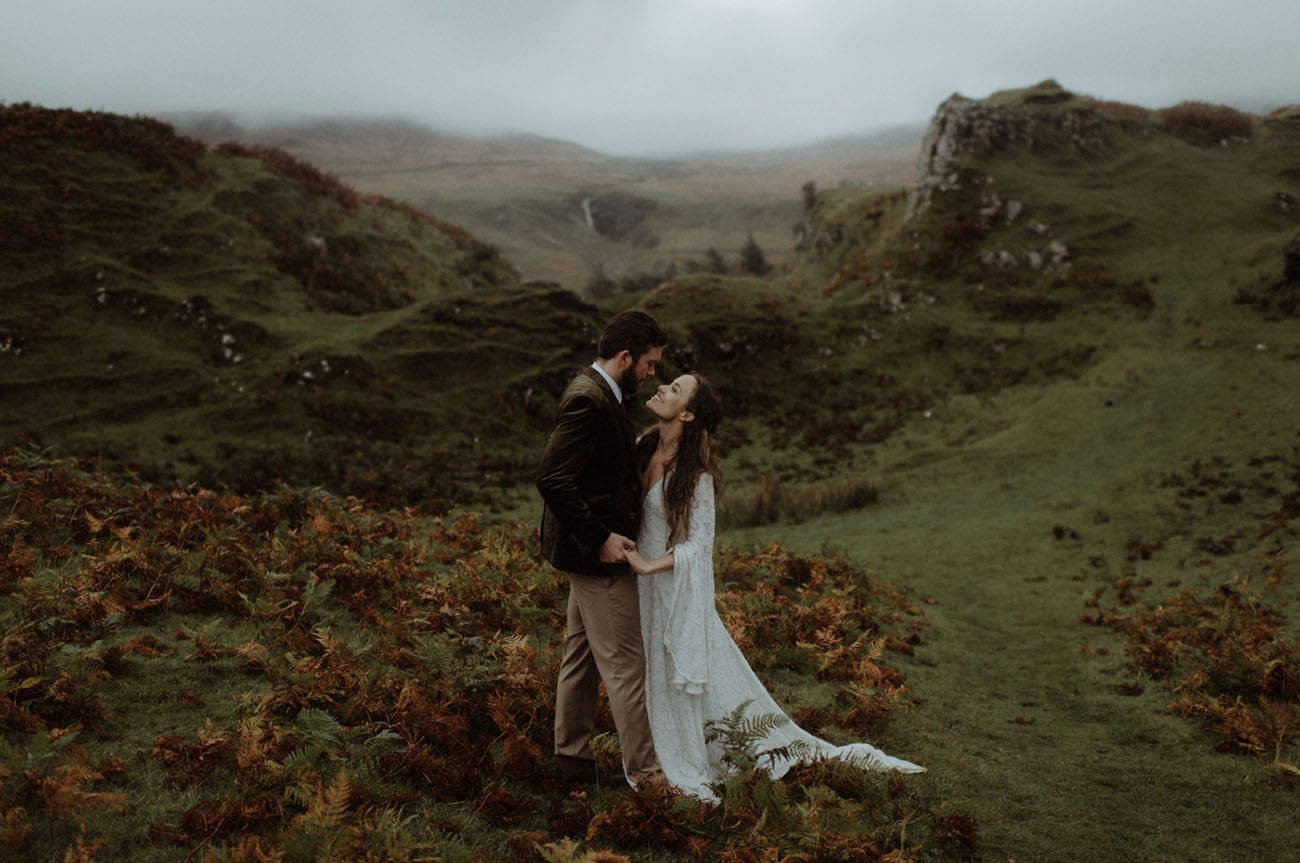 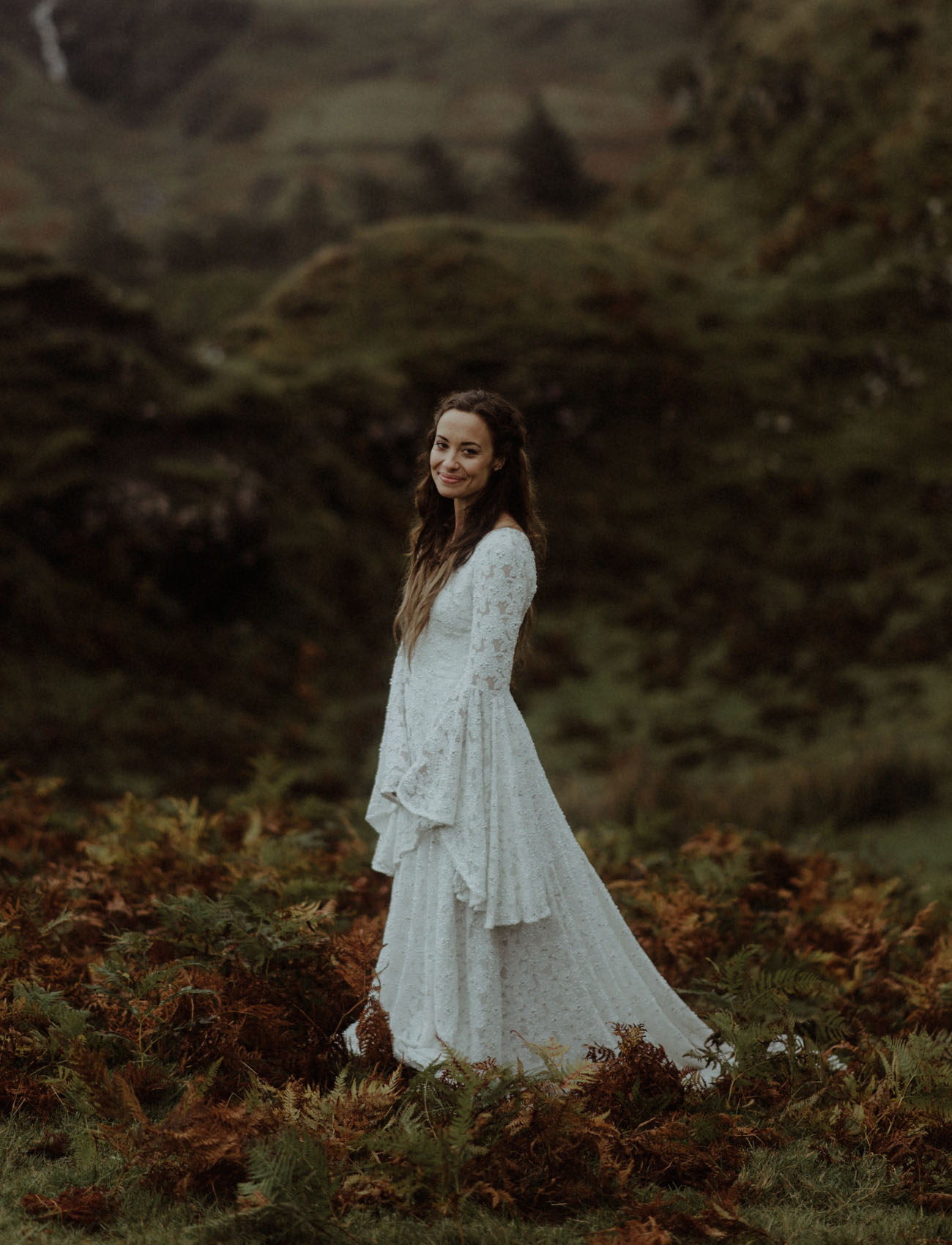 We’d be remiss if we didn’t mention Nicole’s absolute stunning Odylyne The Ceremony gown. Take a look at those flowing sleeves + delicate beading… 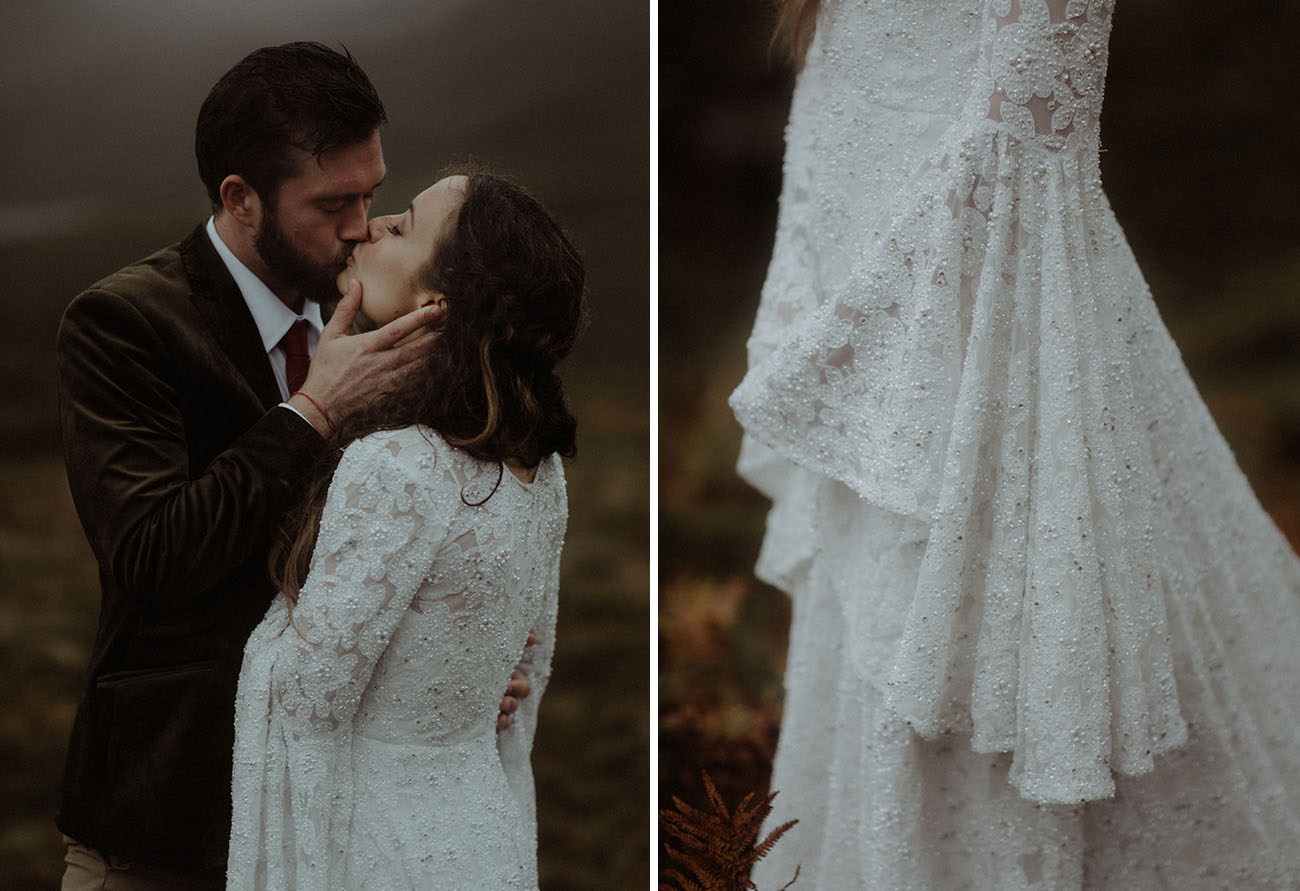 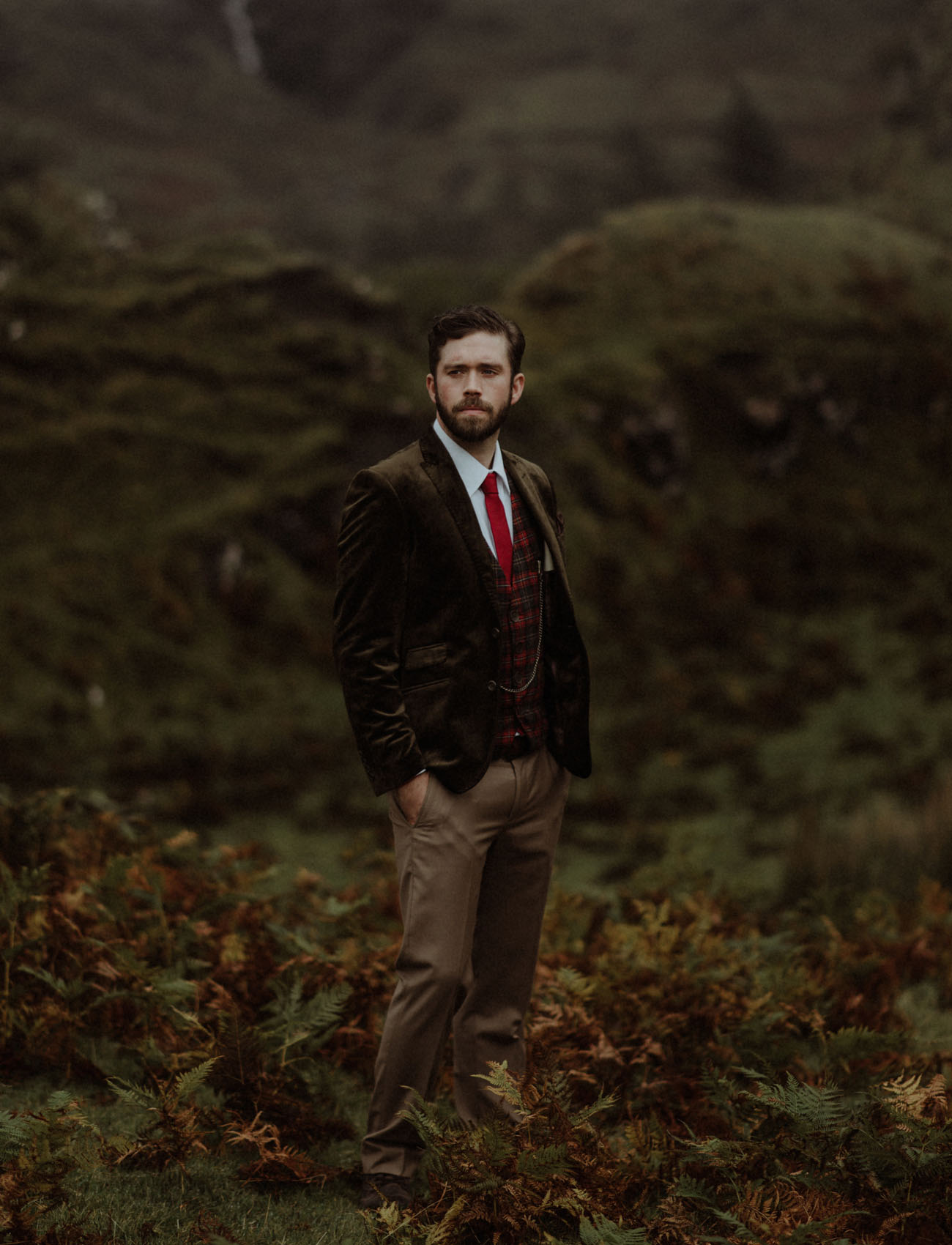 Gustav looked dapper as ever in a velvet suit jacket, and brought in a pop of plaid with his vest. 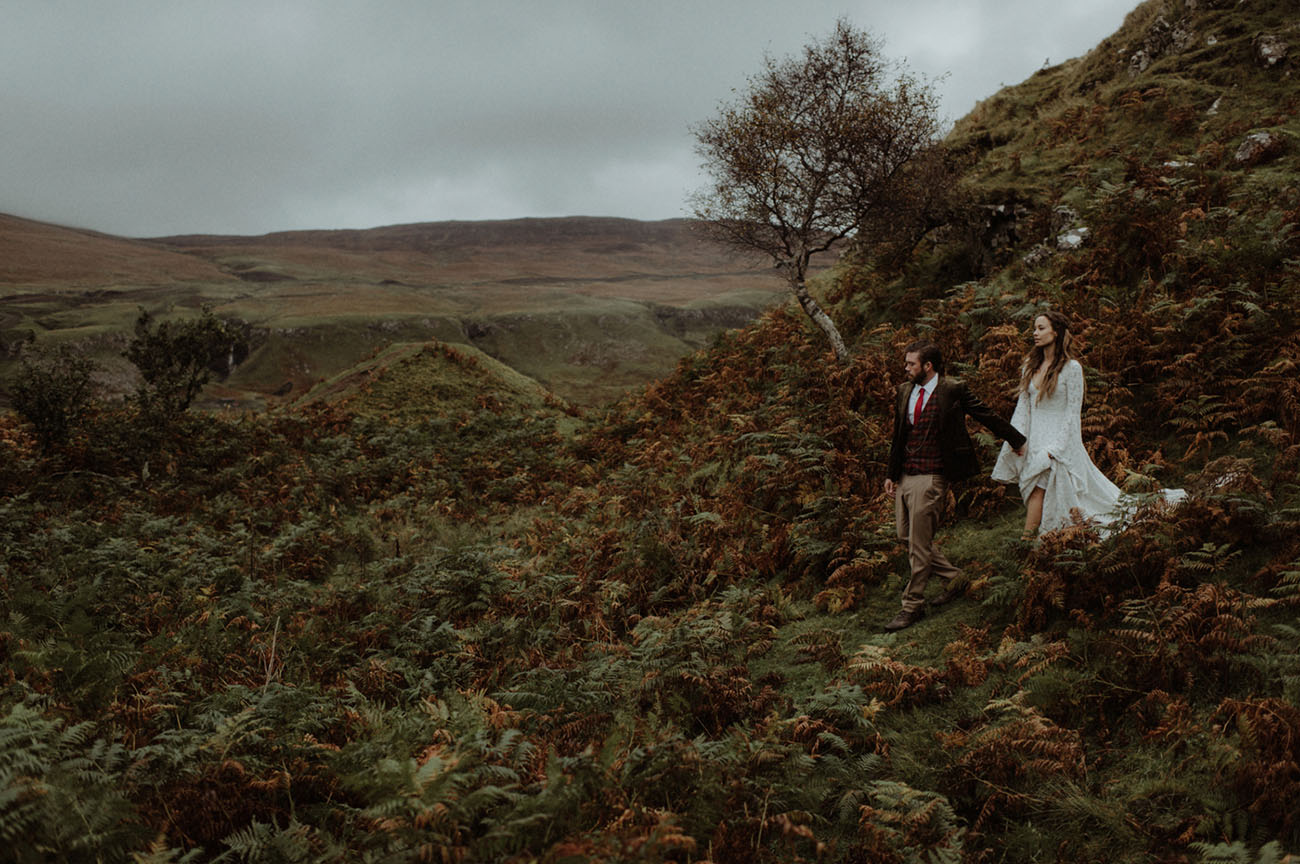 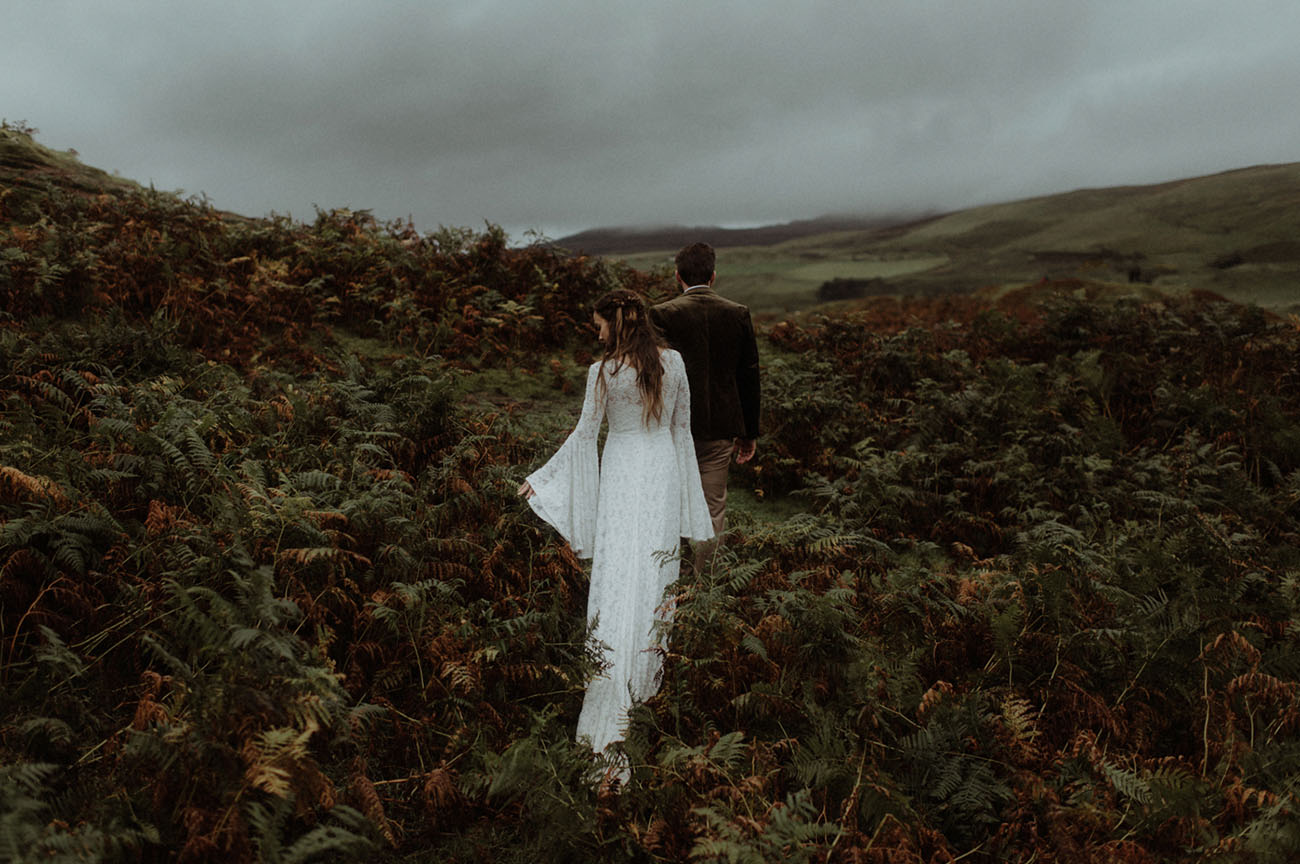 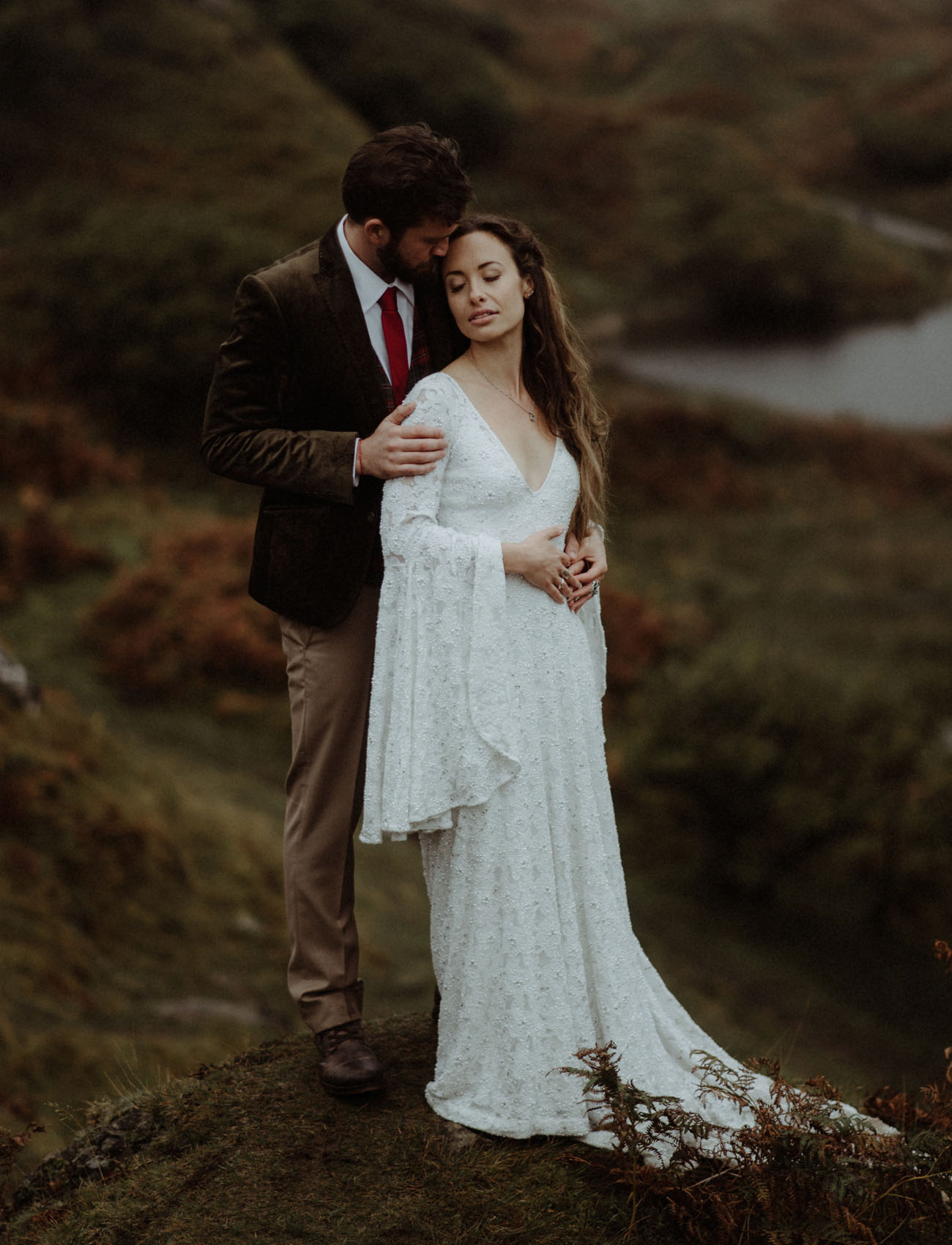 Photographer, Dylan of The Kitcheners shares: One moment that I’ll never forget happened during the morning preparations… Nicole’s grandmother, who passed away some time ago, left behind a necklace and for many years it was sadly missing. Nicole’s mum was packing her bags for Scotland, she discovered the missing necklace and brought it to surprise Nicole on her wedding day.

The moment when Nicole’s mum surprised her with the necklace to wear on her wedding day, she erupted in tears. It was so beautiful. 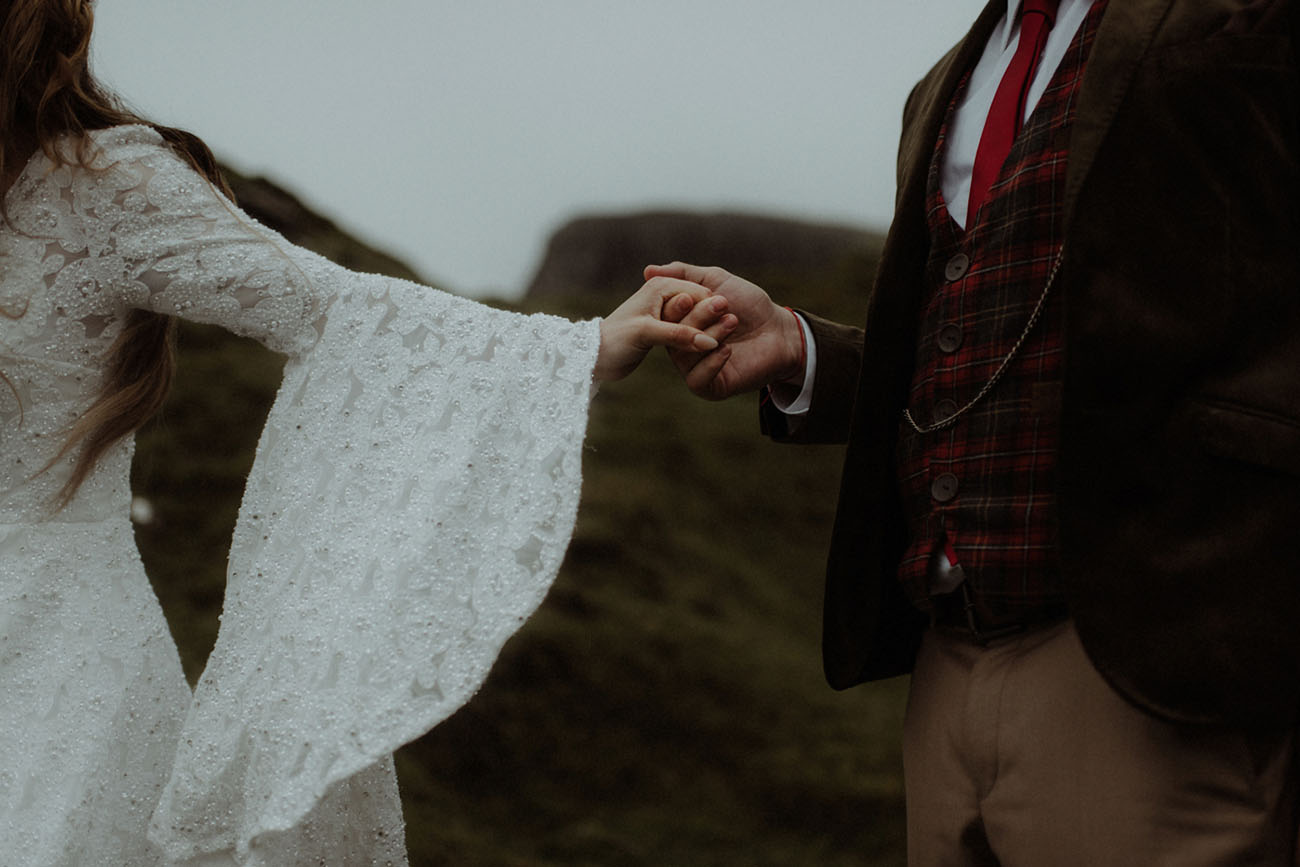 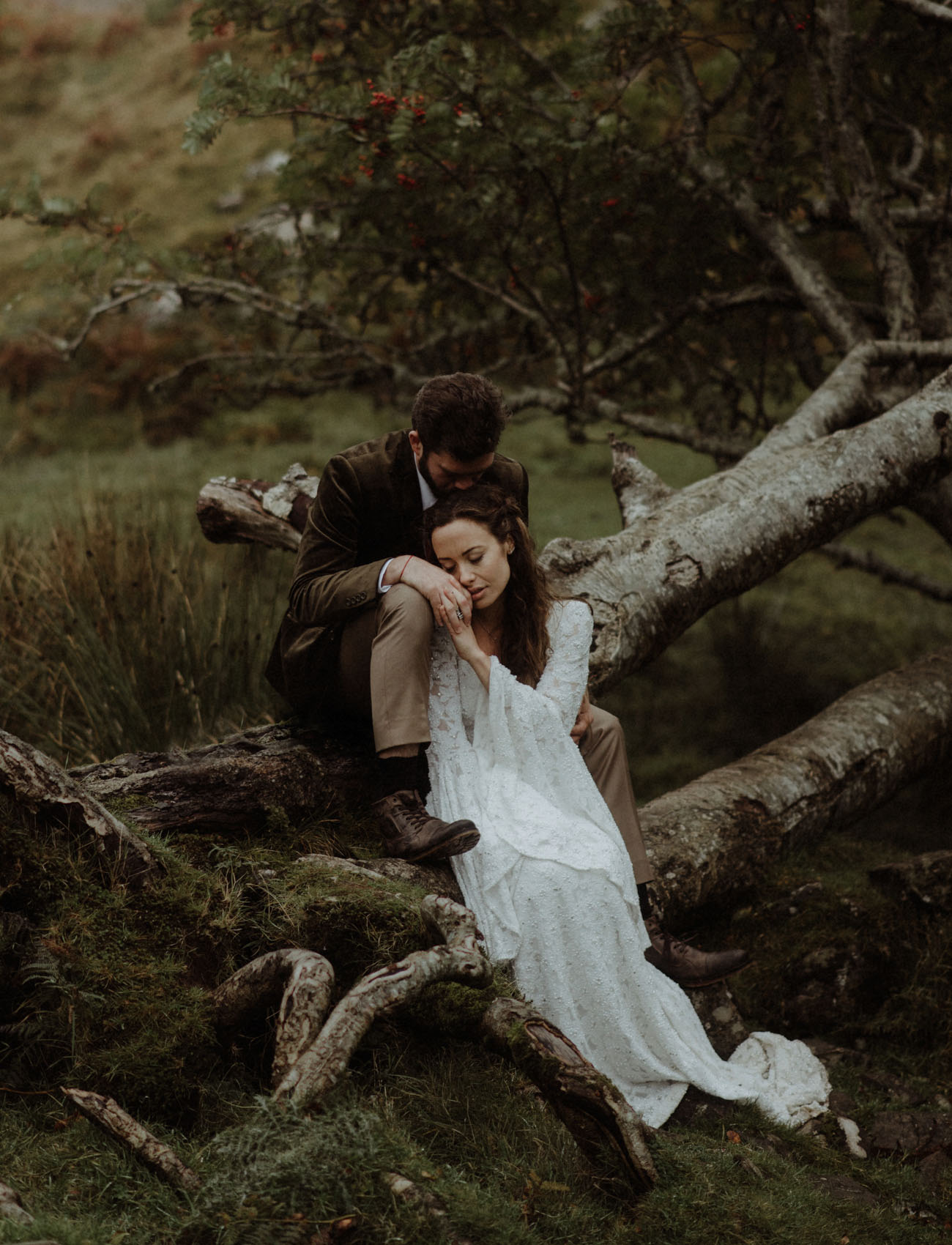 Seriously GORGEOUS. You can just feel all the emotions in this photo… holy smokes. 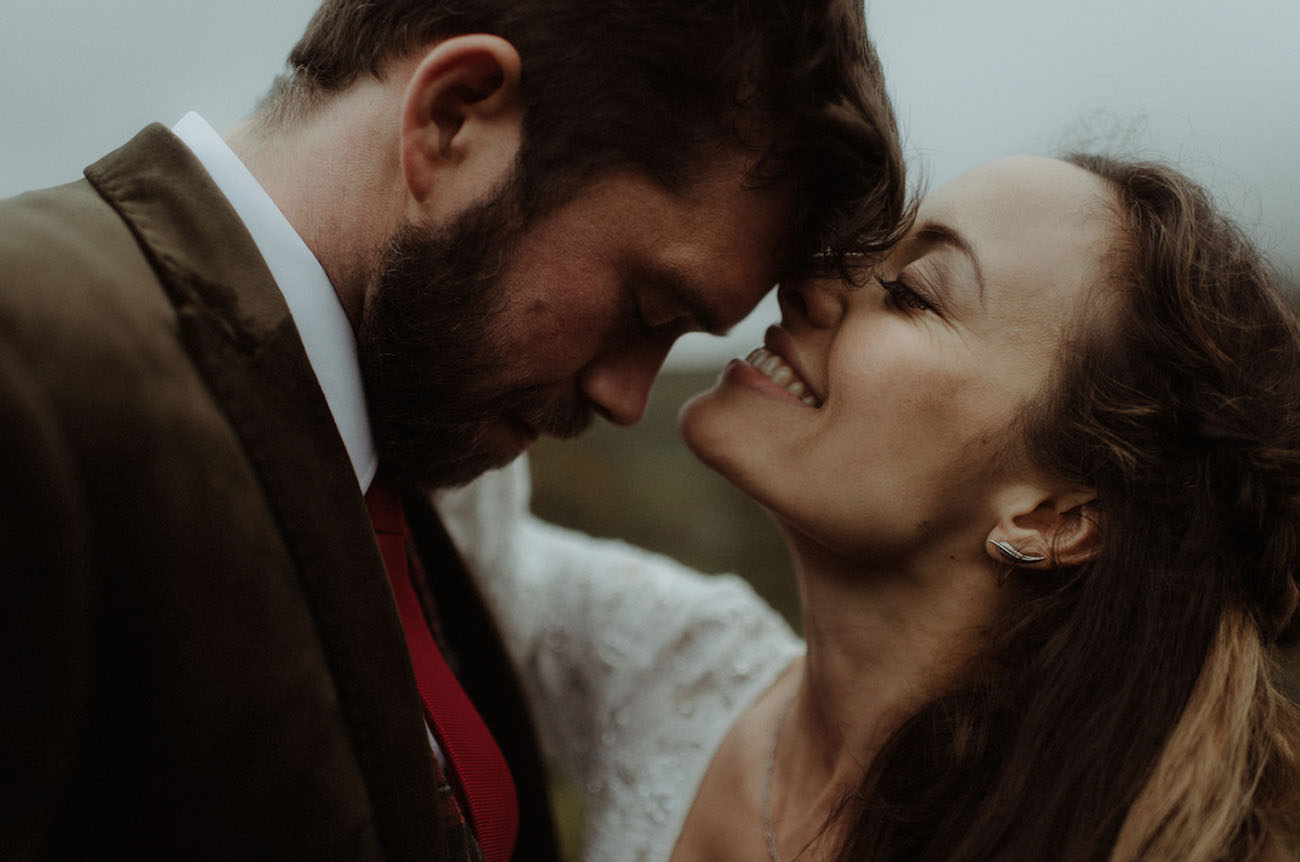 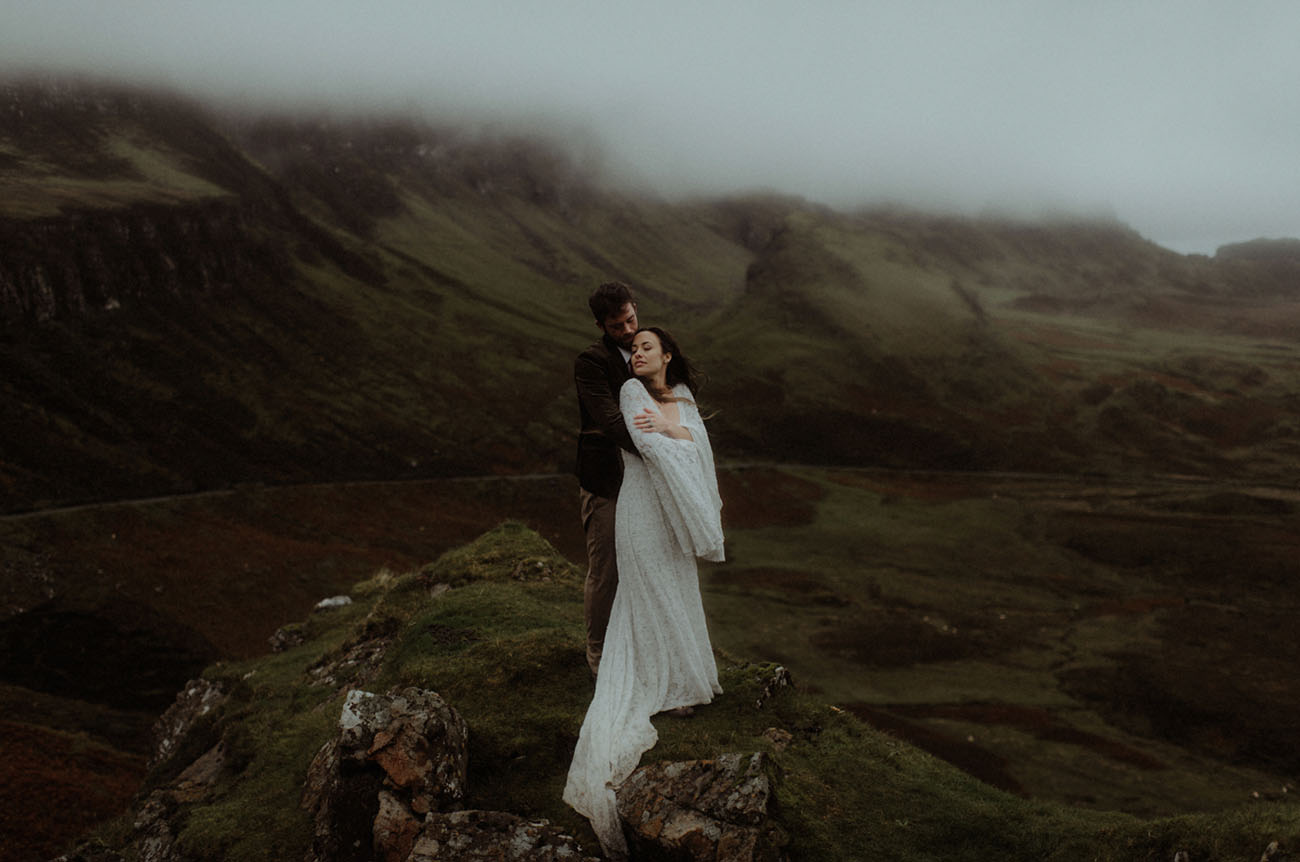 The best advice I can give is do it in your own time, in your own way. If something doesn't feel right, then don't do it. Your gut is telling you it's not right for a reason, and you will find another alternative that suits you and your partner better. Don't be afraid to think outside the box; from the wedding party, to the processional, to the vows, to the dinner, the dancing, the bouquet toss, you name it — it's so easy to get inundated with images/ideas of what a wedding is "supposed" to look/be like.

Remember that you don't have to adhere to all/any of the typical wedding traditions if you don't want to —you can create new traditions of your own, or bring in alternative traditions from other cultures/religions/communities if you want to. There is so much joy to be found in being creative about your day, and in surprising your friends and family with new/unique elements of your ceremony or reception that they would never have expected.

I also highly recommend really planning the ceremony together (as opposed to the bride taking most of that on herself). Our ceremony was so special because we really took the time to choose passages, music, and rituals that spoke to both of us, and we had several planning conversations with our minister (a dear friend of ours) in the process, so that he could bring his expertise and unique touch to it, as well. 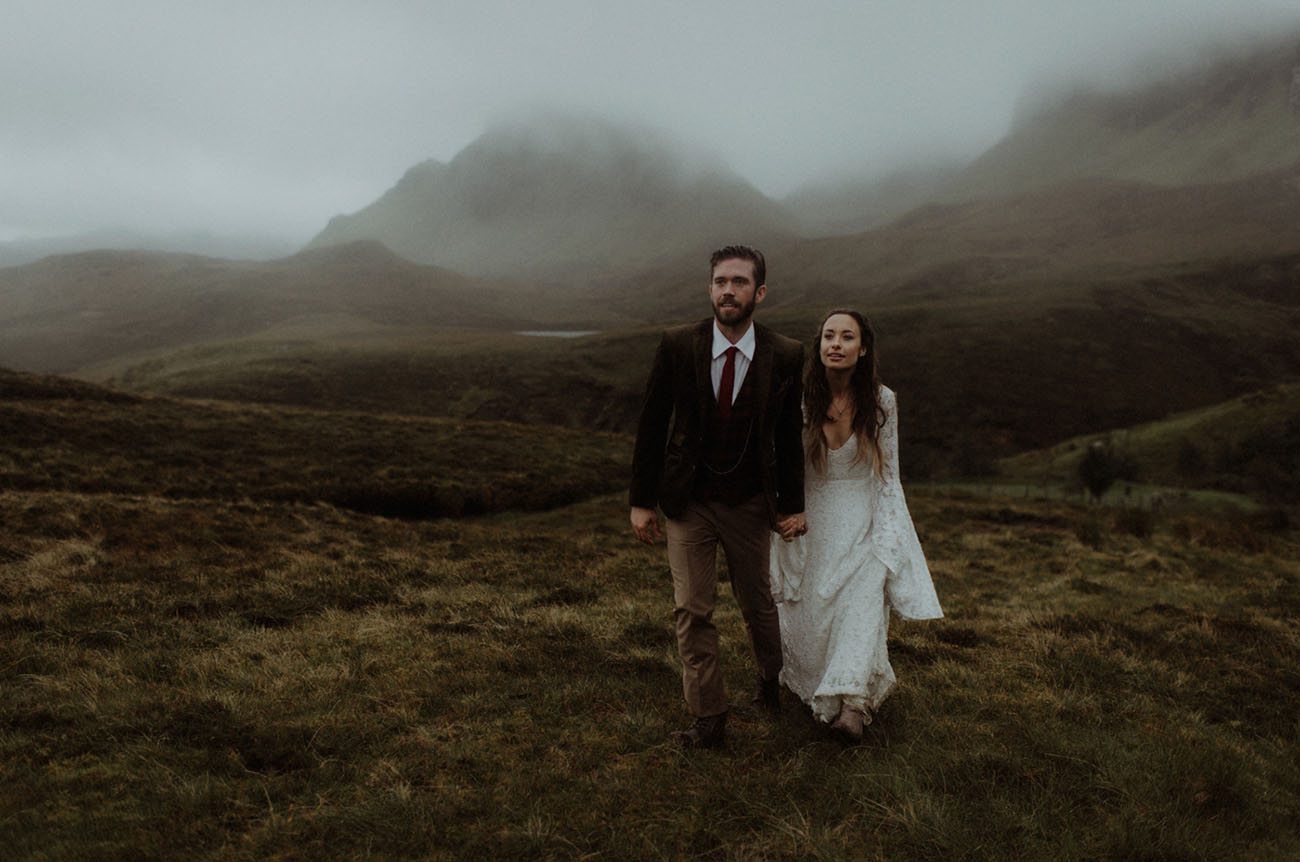 Is anyone in tears of happiness for these two? So incredibly mystifying, enchanting, and filled with love.