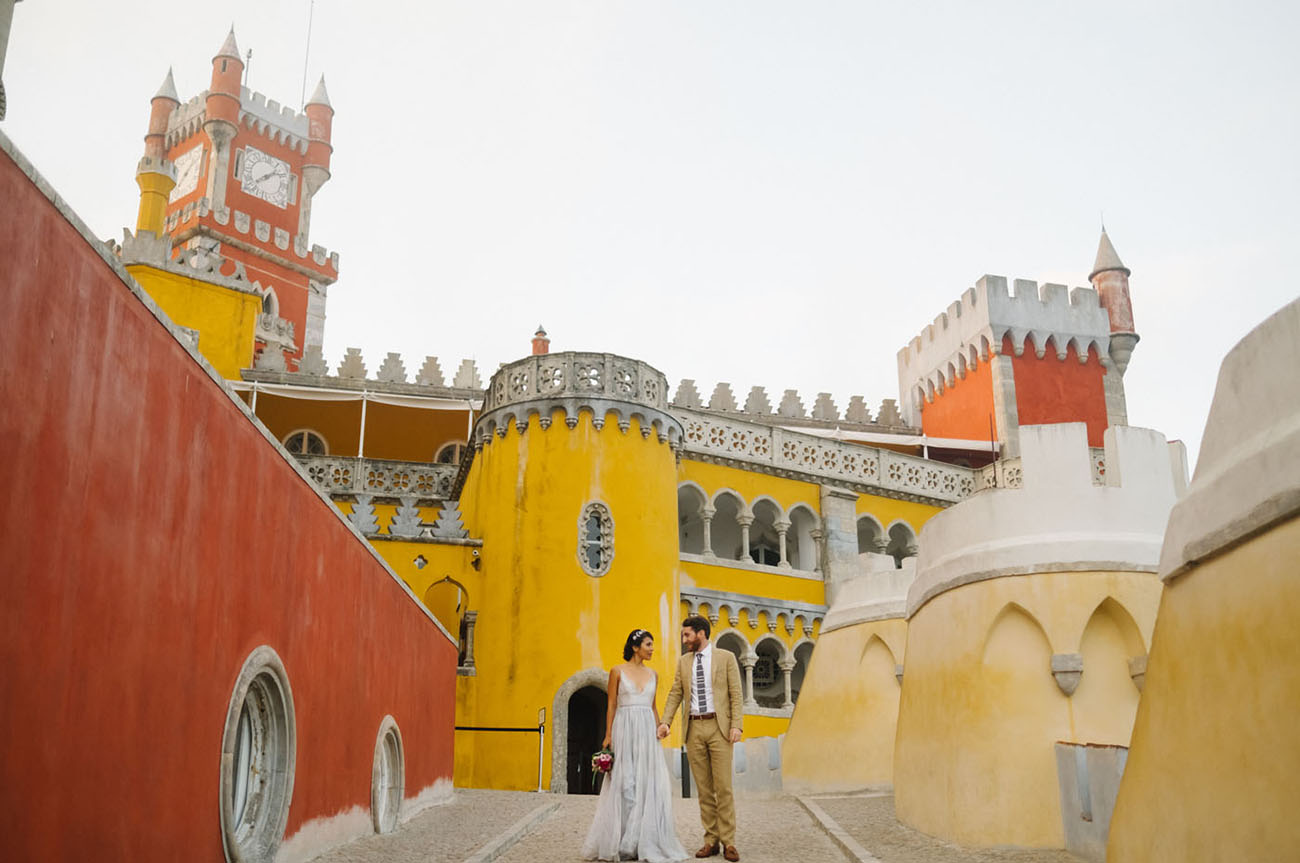 When Nicole and John got engaged, they immediately knew they didn’t want anything that resembled a large, traditional wedding. Rather, they wanted to do something that incorporated their sense of adventure…and that’s where the endless options come in! Having never been to Portugal, they decided on Pena Palace in Sintra—prepared to be surprised by whatever they found.

Nicole tells us: We had never been to Portugal before but it had been on our list of places to go and we decided to go in blind. Again, an adventure. Pena Palace was the summer home of the Portuguese royal family and was finished being built in 1854. We felt that if we could pull this off, it would be an extraordinary locale for our elopement. I opted to plan our elopement without a wedding planner which was at times stressful but also kept me in control of what was going on. The most important thing for us was to find a photographer that would be down for this crazy stunt and who knew the area well. 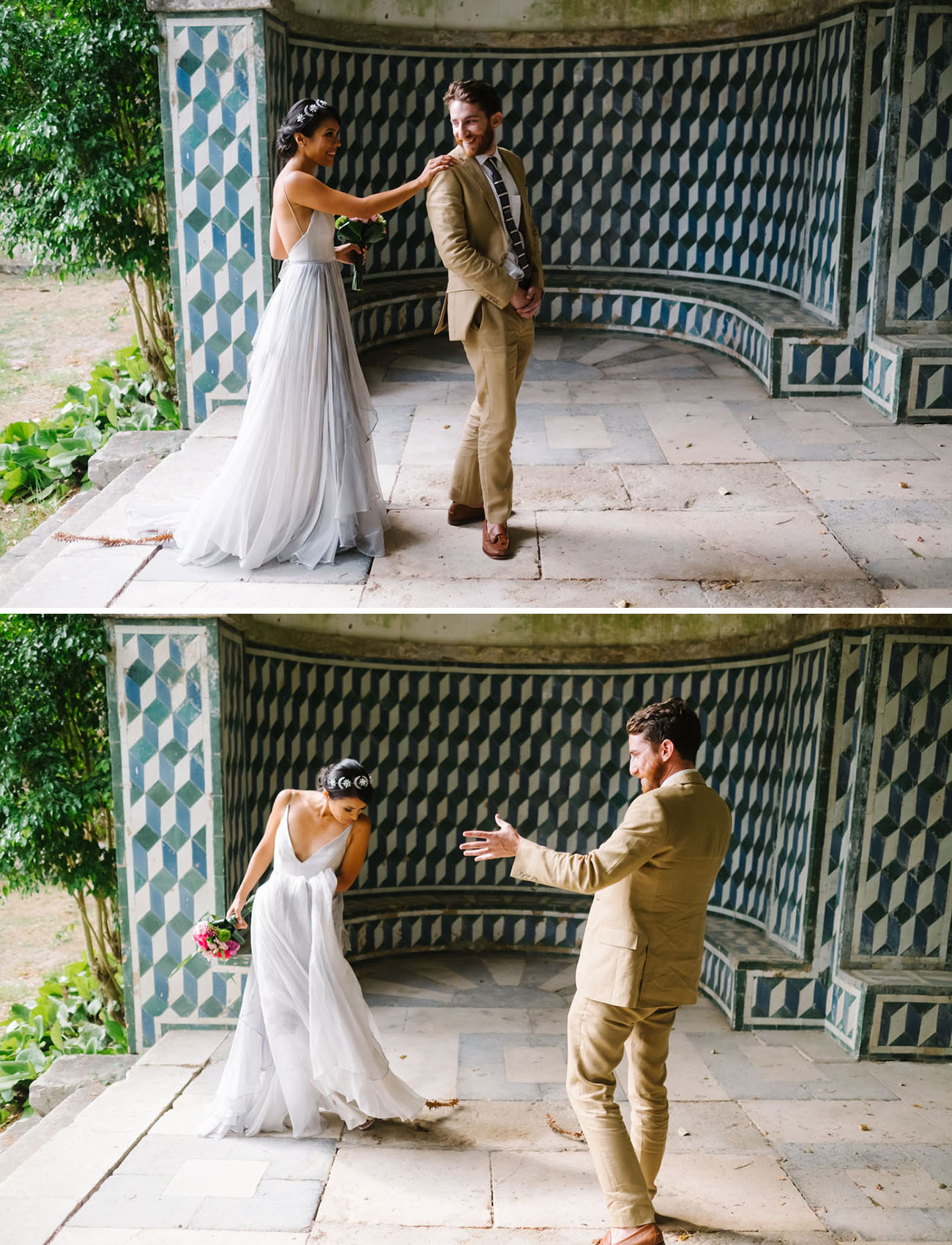 N+J stayed at the Ritz Carlton Penha Longa, which was where they had their first look. The resort was a former palace built on 14th century monastery ruins…and the first look set the tone for what was in store.

When the place is brimming with amazing tile work, you’ve got to make use of it, right? 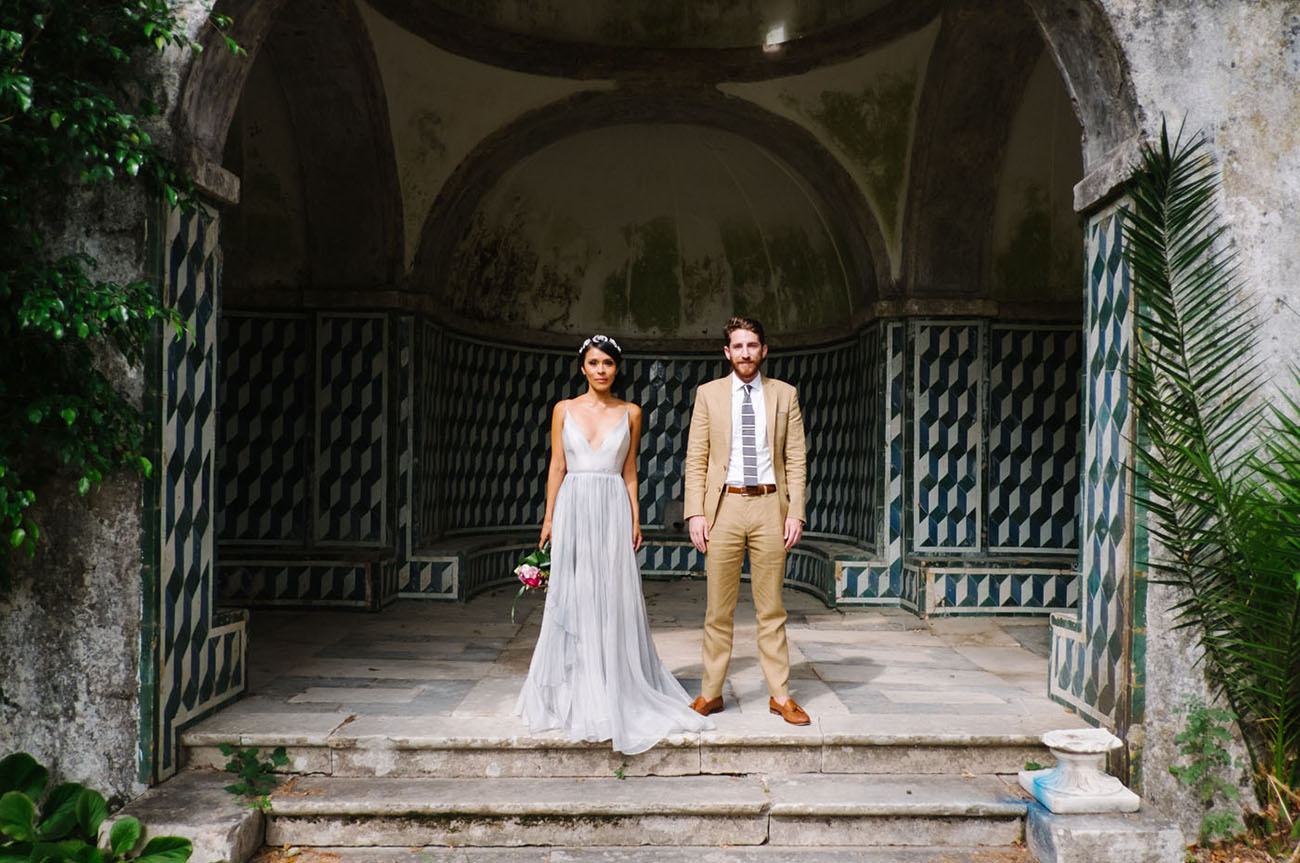 When we arrived to the castle, there was a mom with two little kids. She stopped us and said that her kids wanted to take a picture with us because they thought I was a princess that lived in the castle. Her super cute son had a toy shield and sword with him and he held them up, protecting me, when we took the picture. It was really sweet. Nicole wore a Leanne Marshall with a soft tulle skirt. How stunning is that subtle gray hue?

Portraits in the Palace 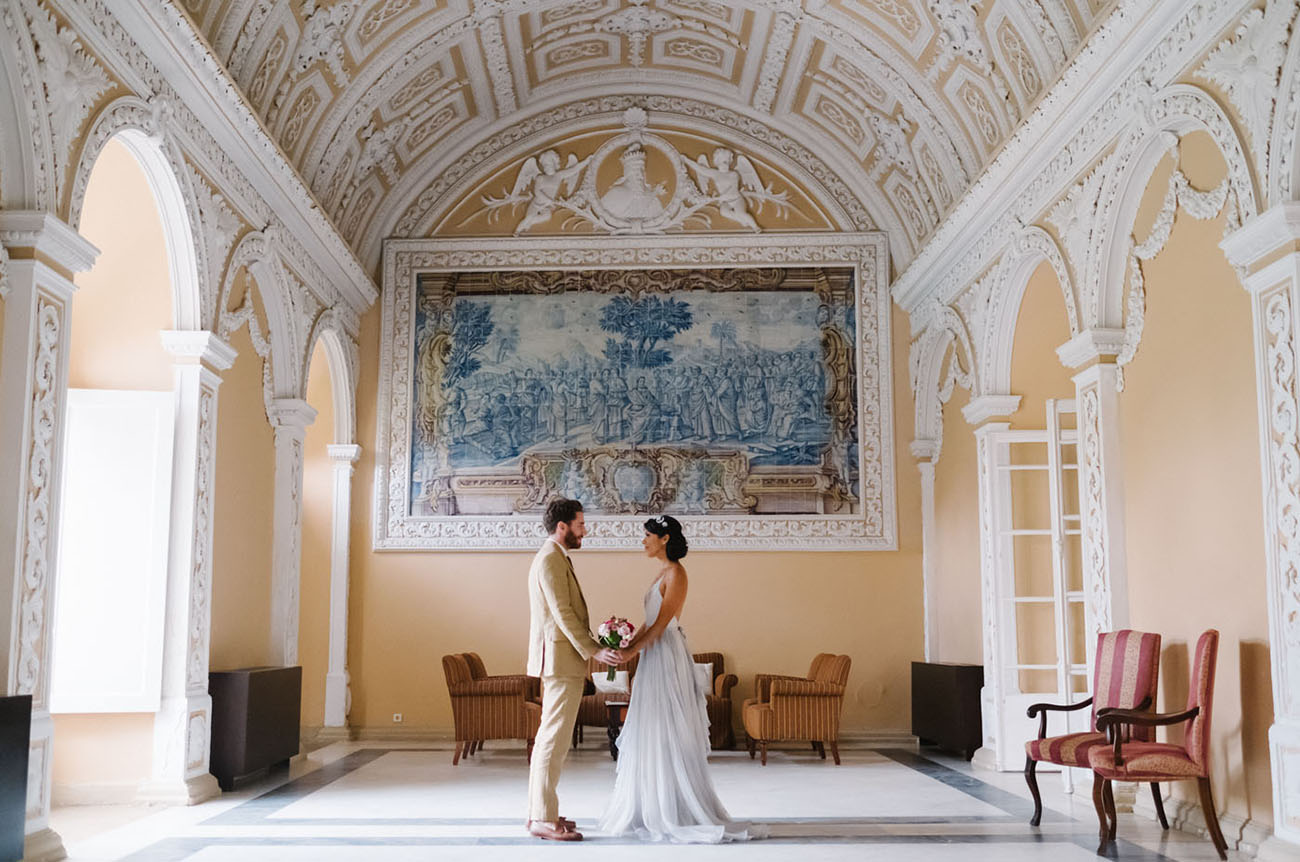 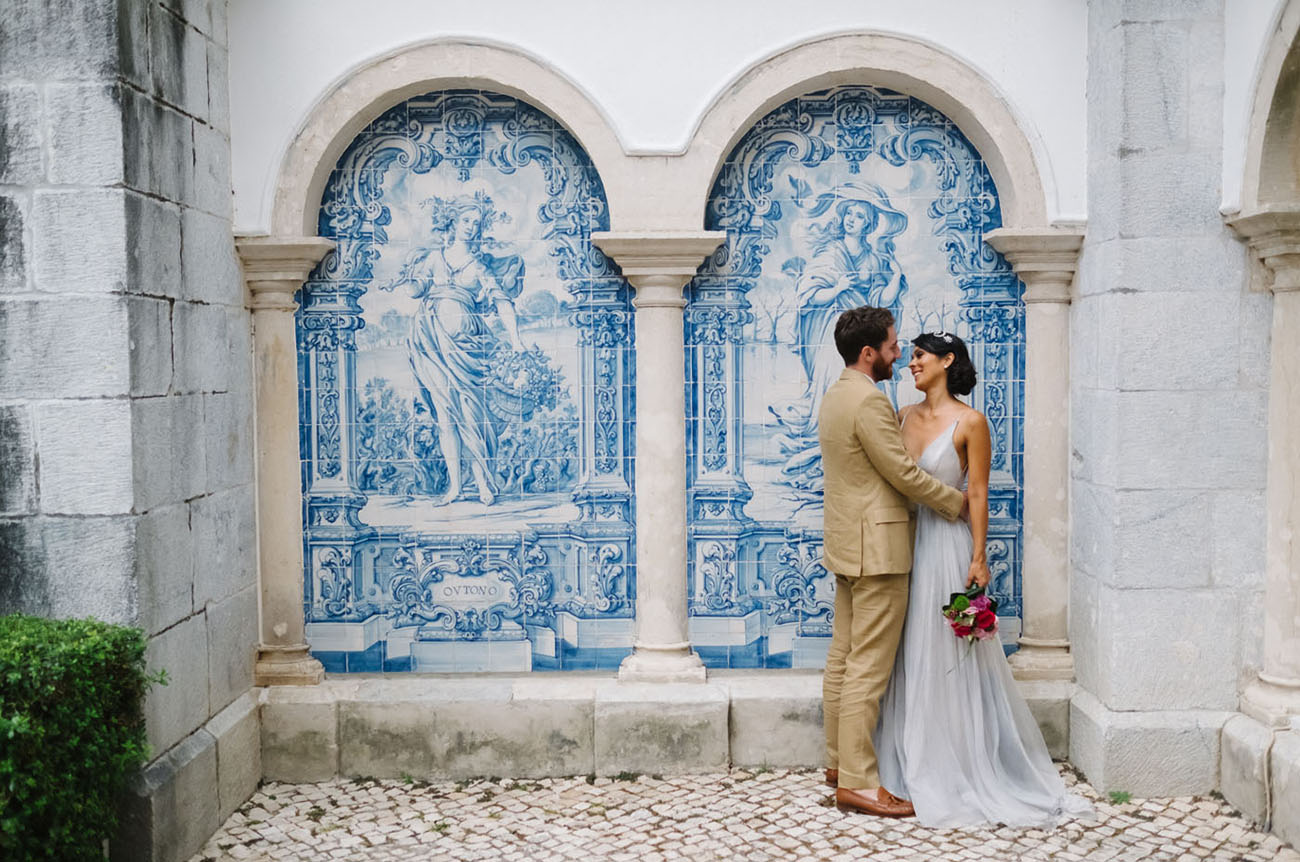 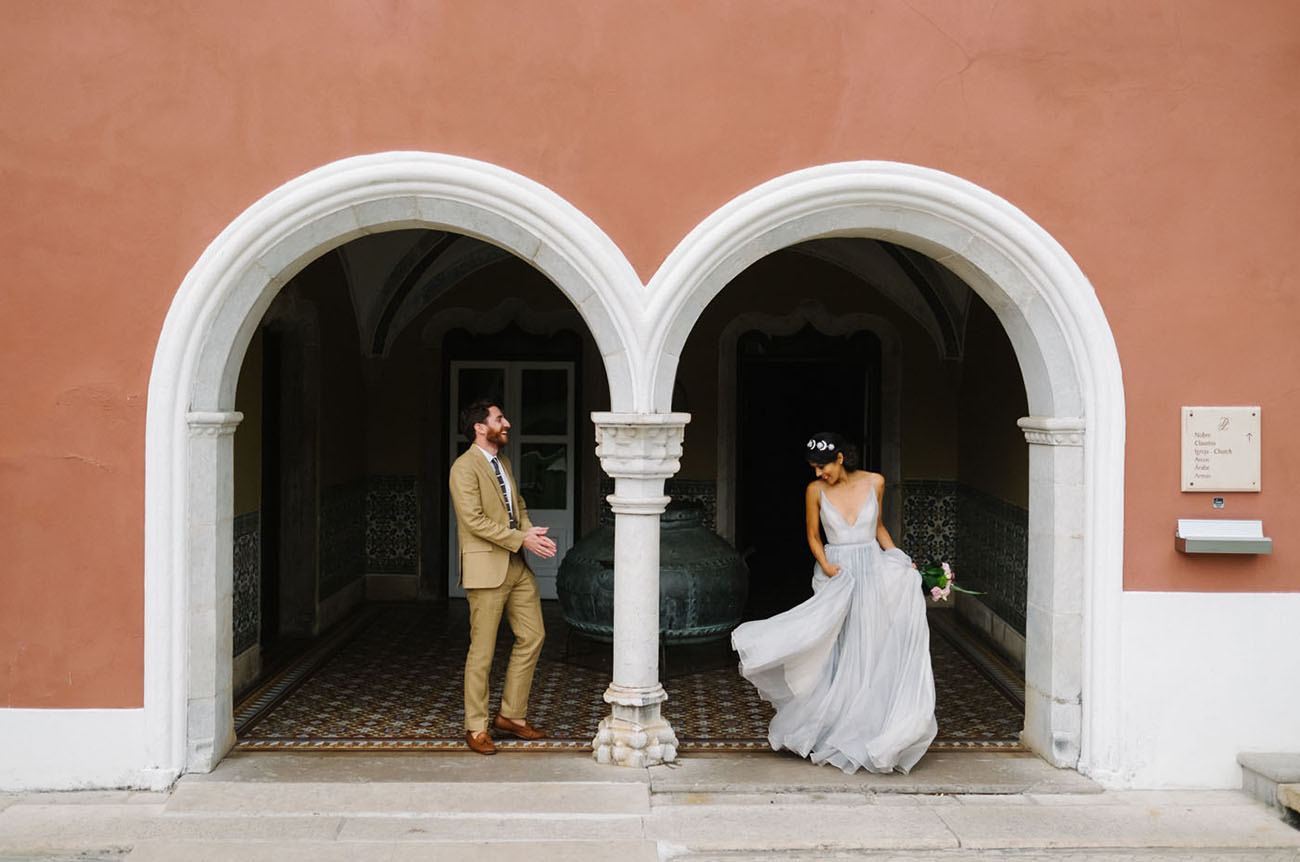 Pena Palace is situated at the very top of the mountain. Despite driving as far as they could go, they still had to trek another 20 minutes uphill… Nicole did this in her wedding dress + heels, no less! 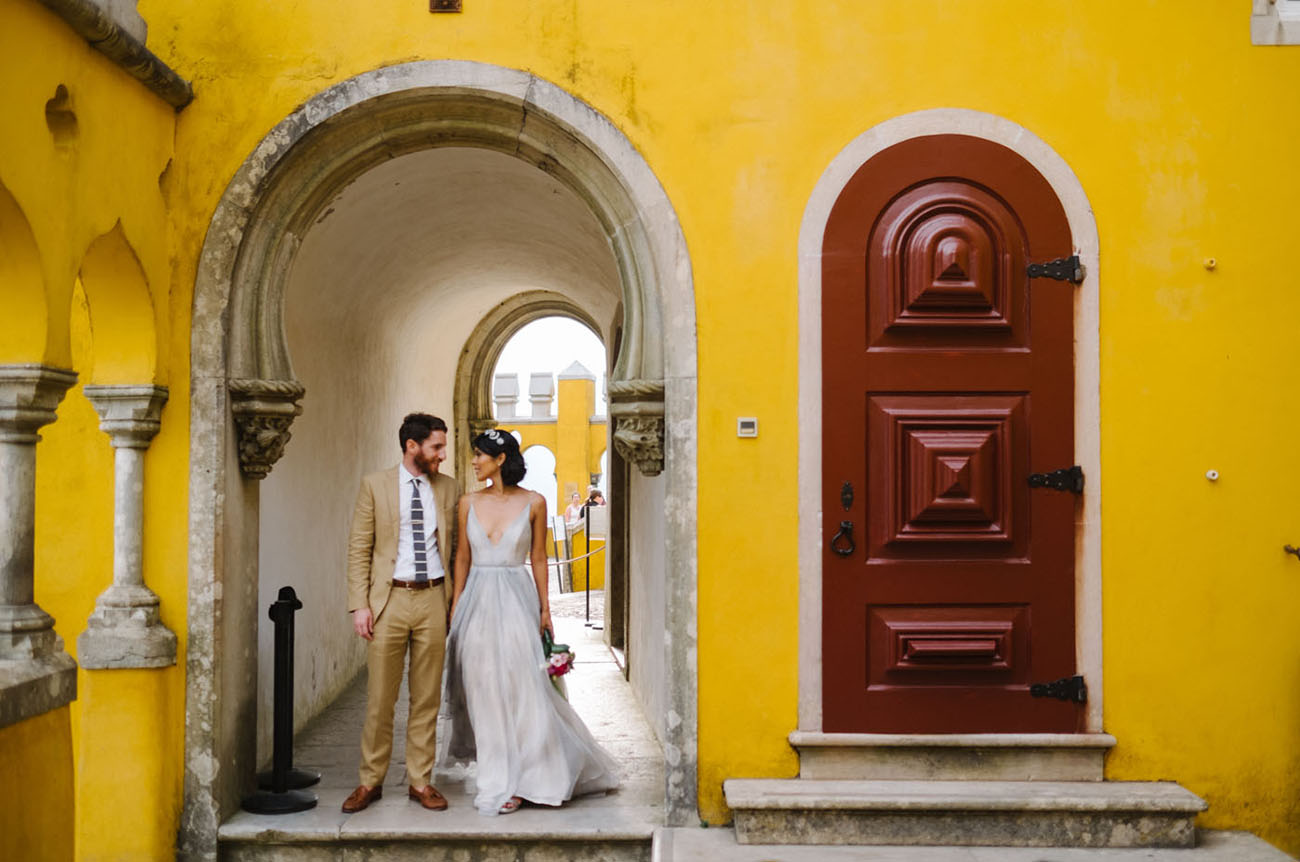 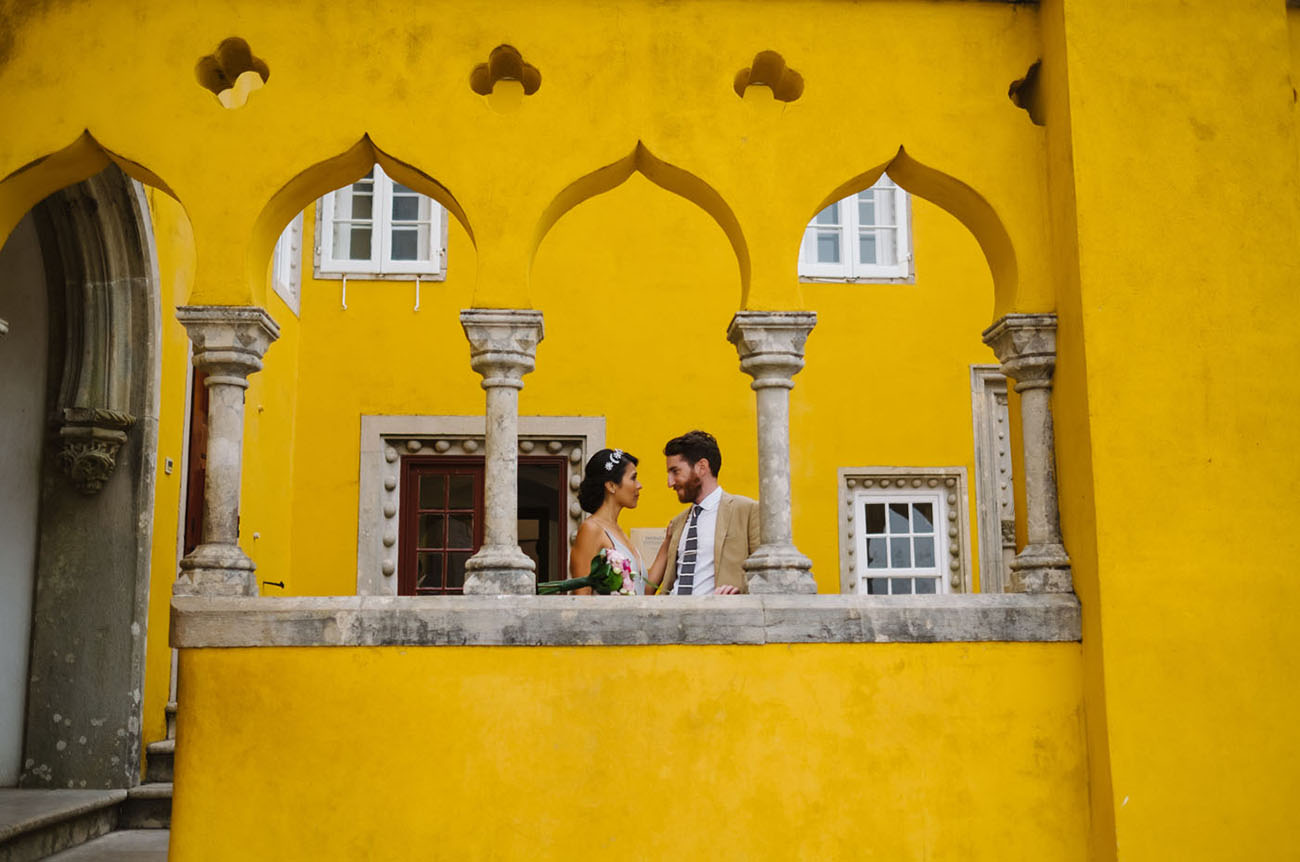 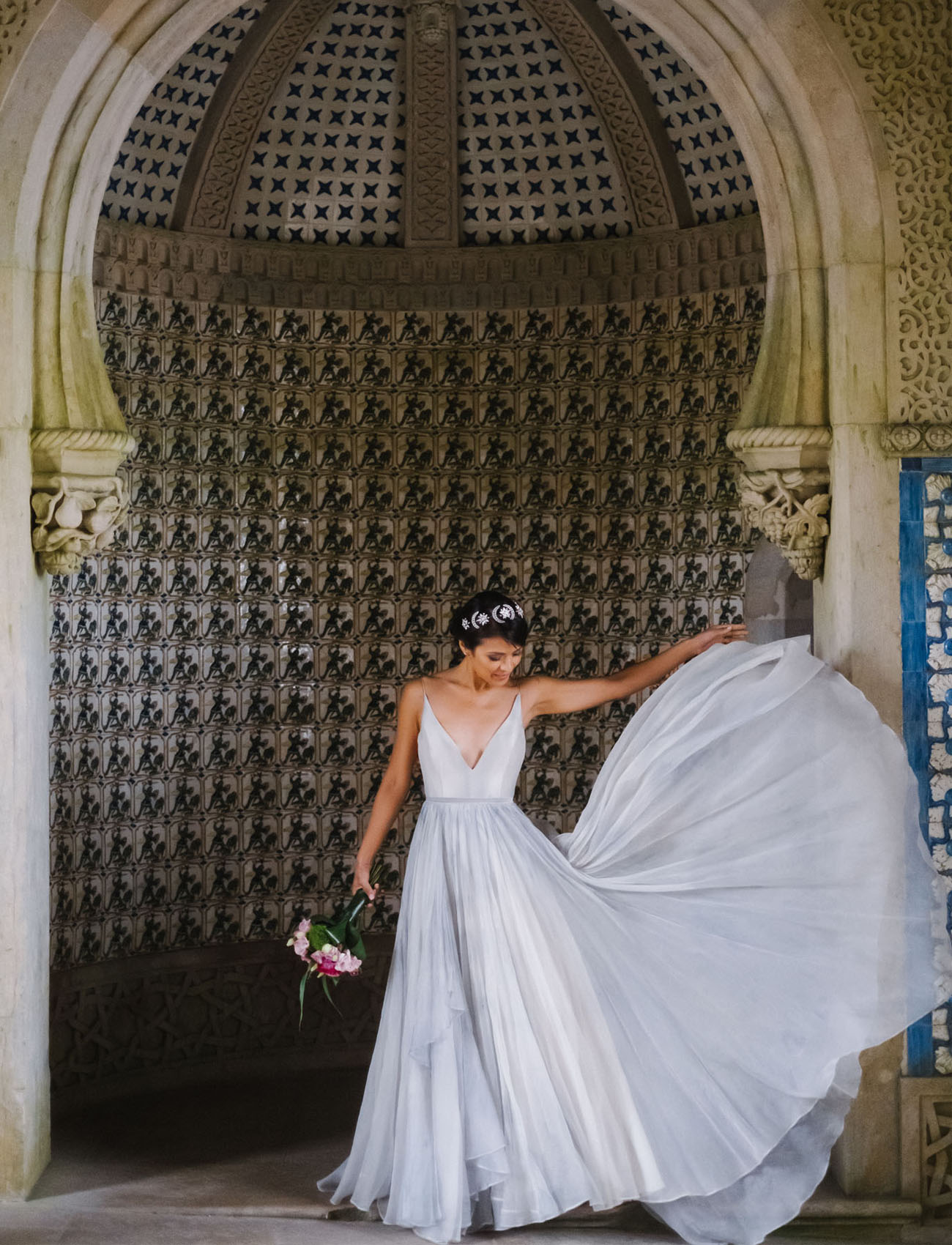 Are you eyeing the bride’s Jennifer Behr star hairpiece? So chic! 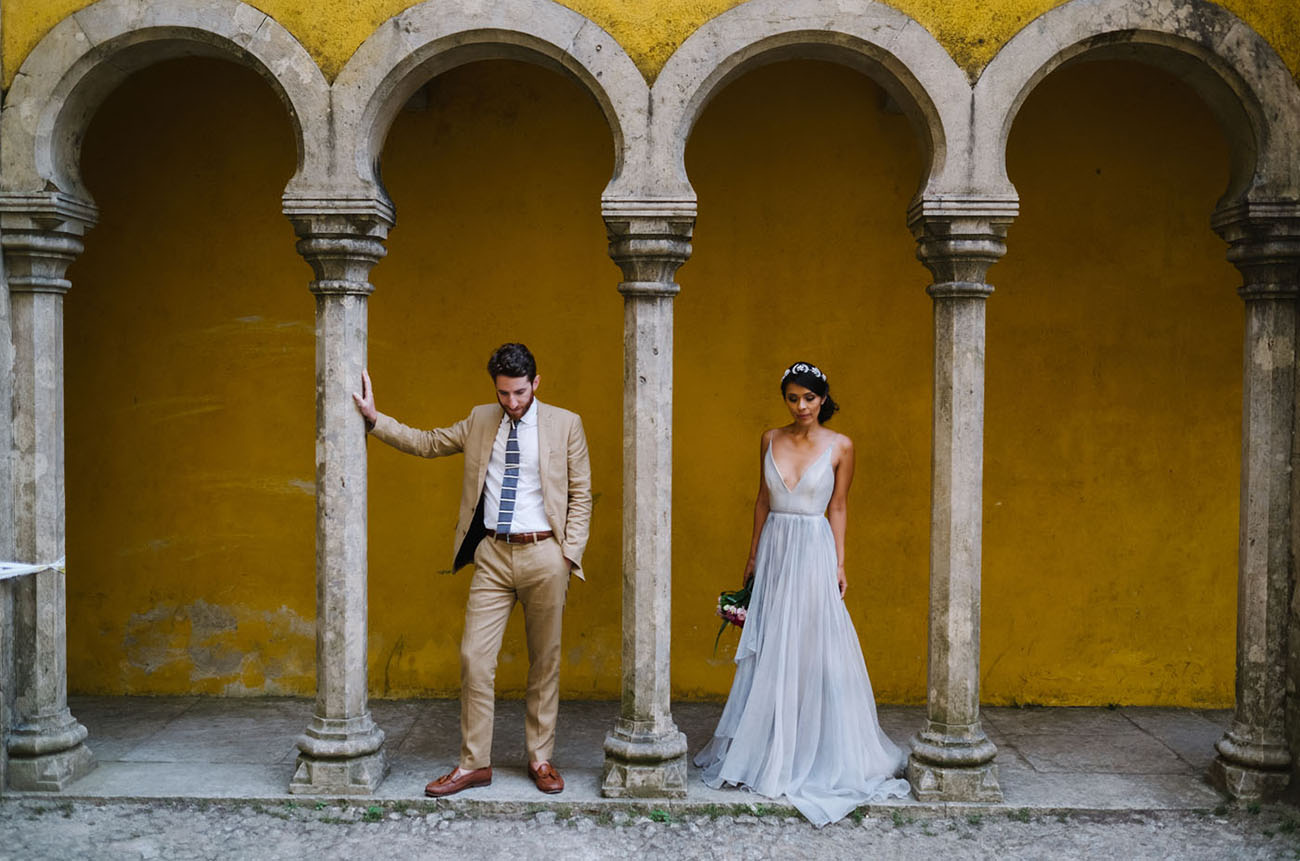 Royalty for a Day Can’t get over those colors!! 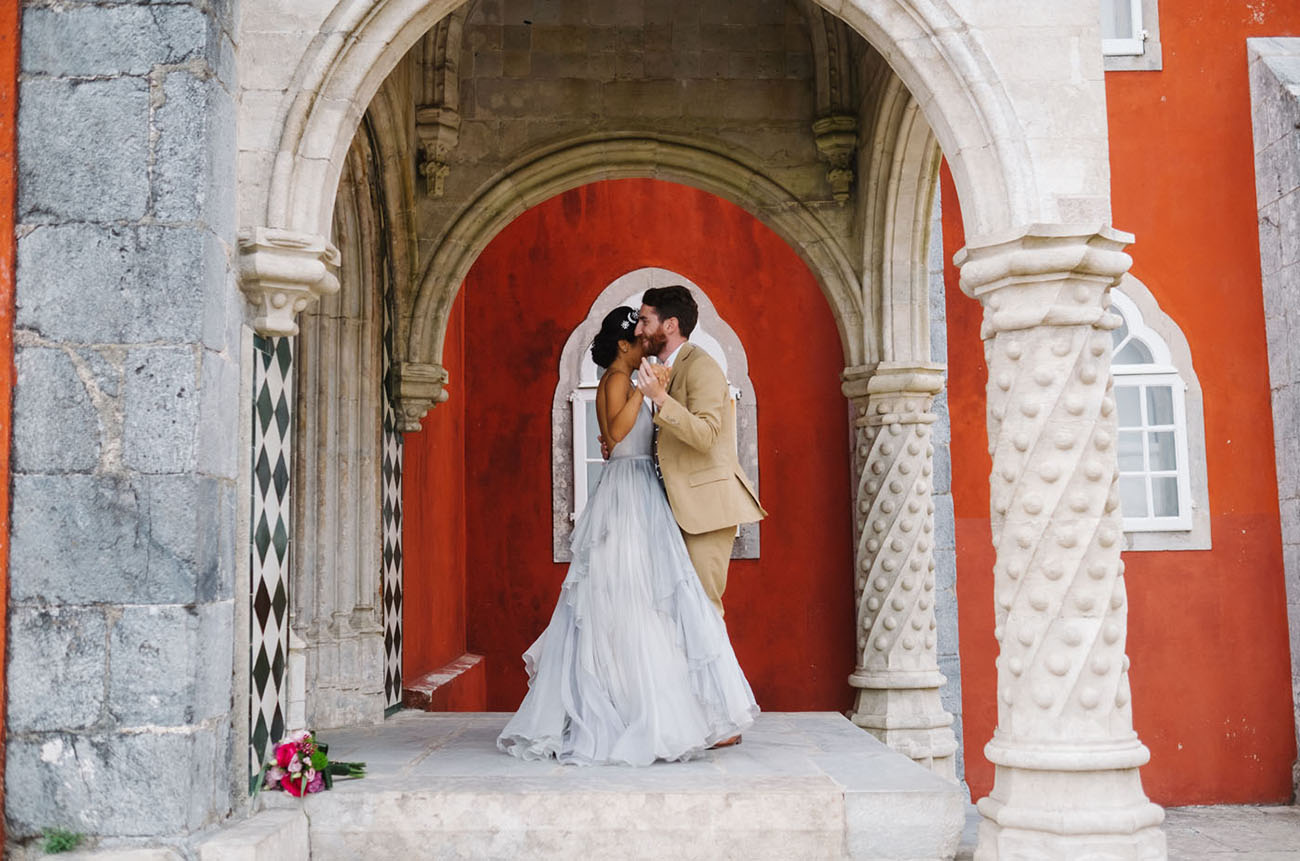 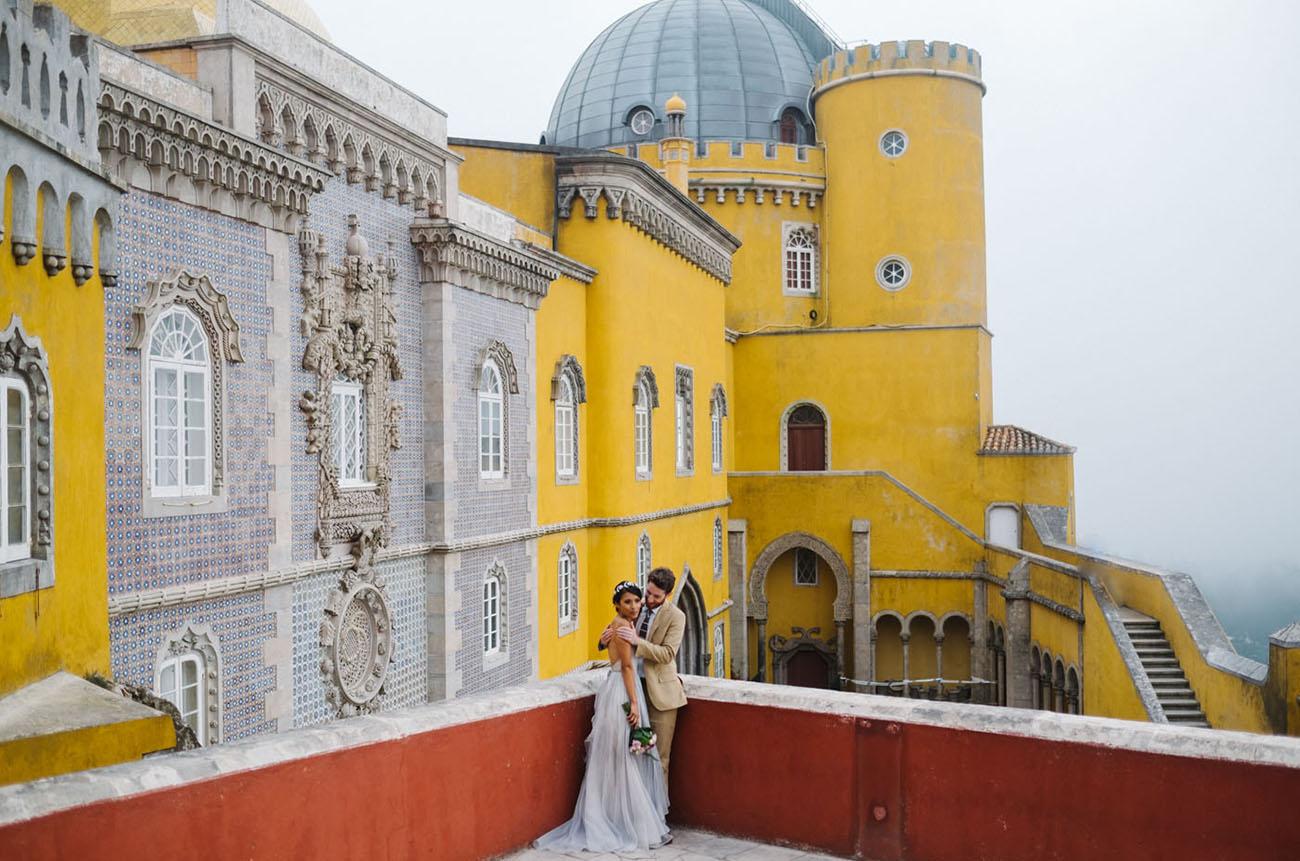 We wanted the day to feel magical and meaningful. I don’t know that we had any specific inspiration in mind but we were definitely set in finding a stunning locale. Once we saw Pena Palace, we were just blown away by how beautiful it was and how it’s situated so far up a mountain that you feel like you’re in the clouds. We’ve always found ourselves climbing up ridiculous hills every time we’ve gone abroad. This was no exception. We took it all in stride and were thrilled to be on this adventure together. 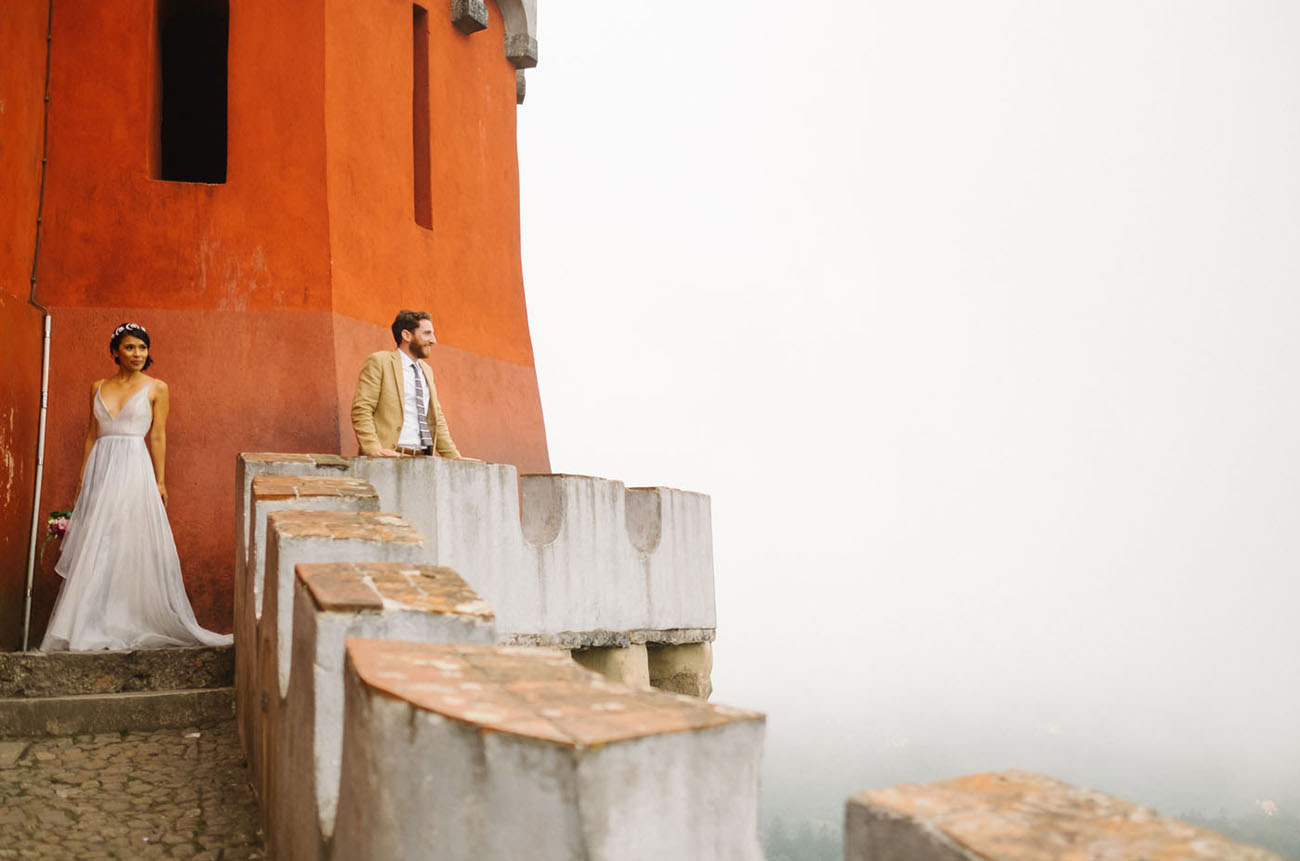 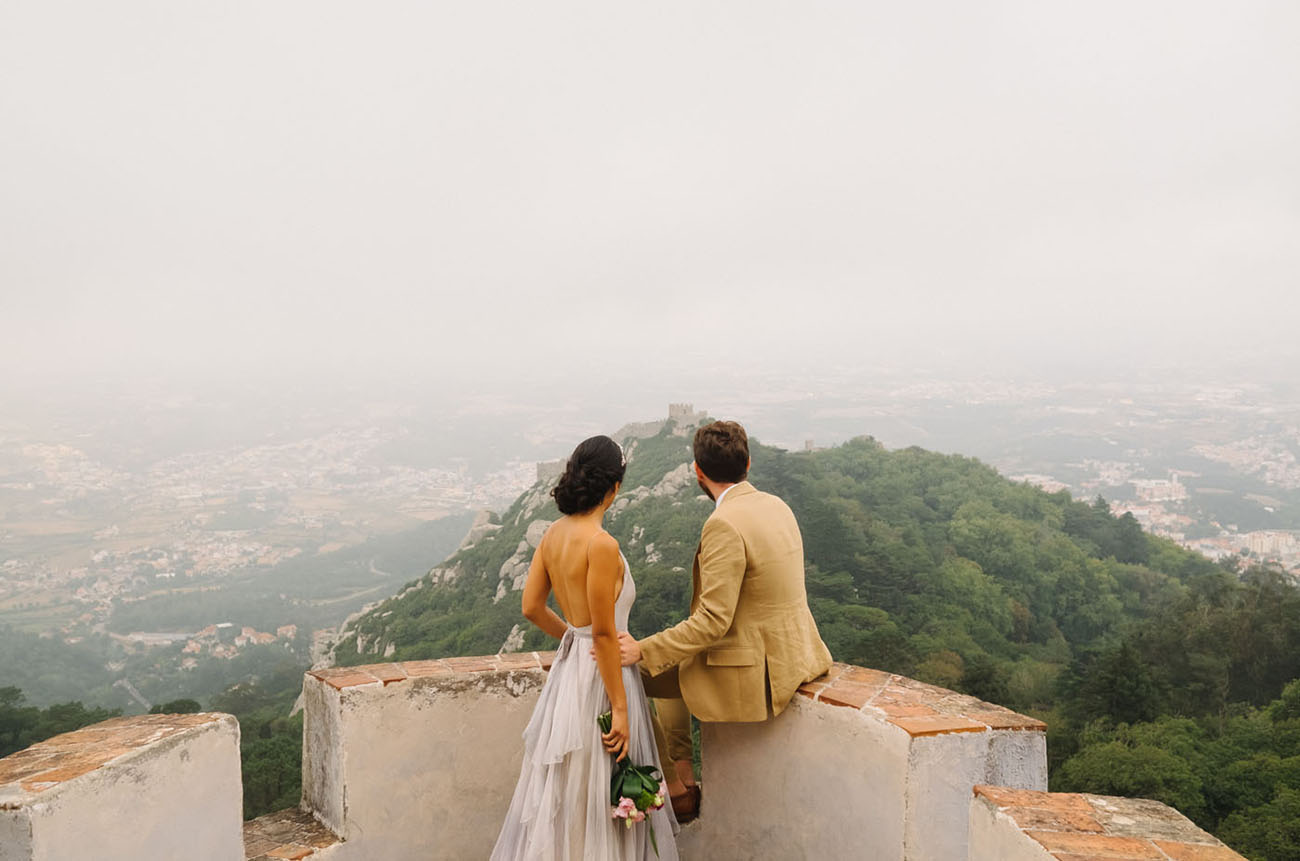 At the top of the palace, you can see the Moors castle across the way, all of Sintra, and as far as Lisbon—which is about a 30 minutes drive away. Such a spectacular view, no? 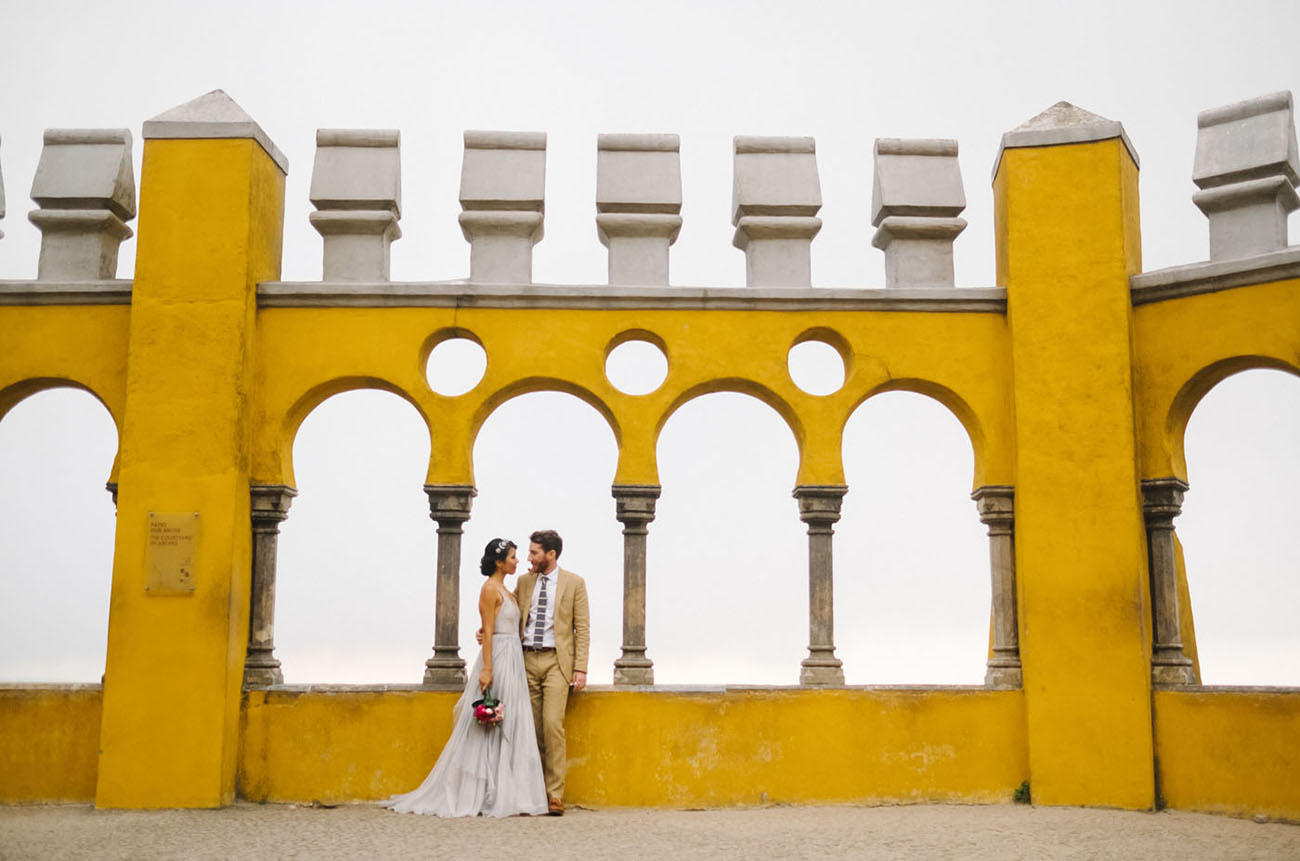 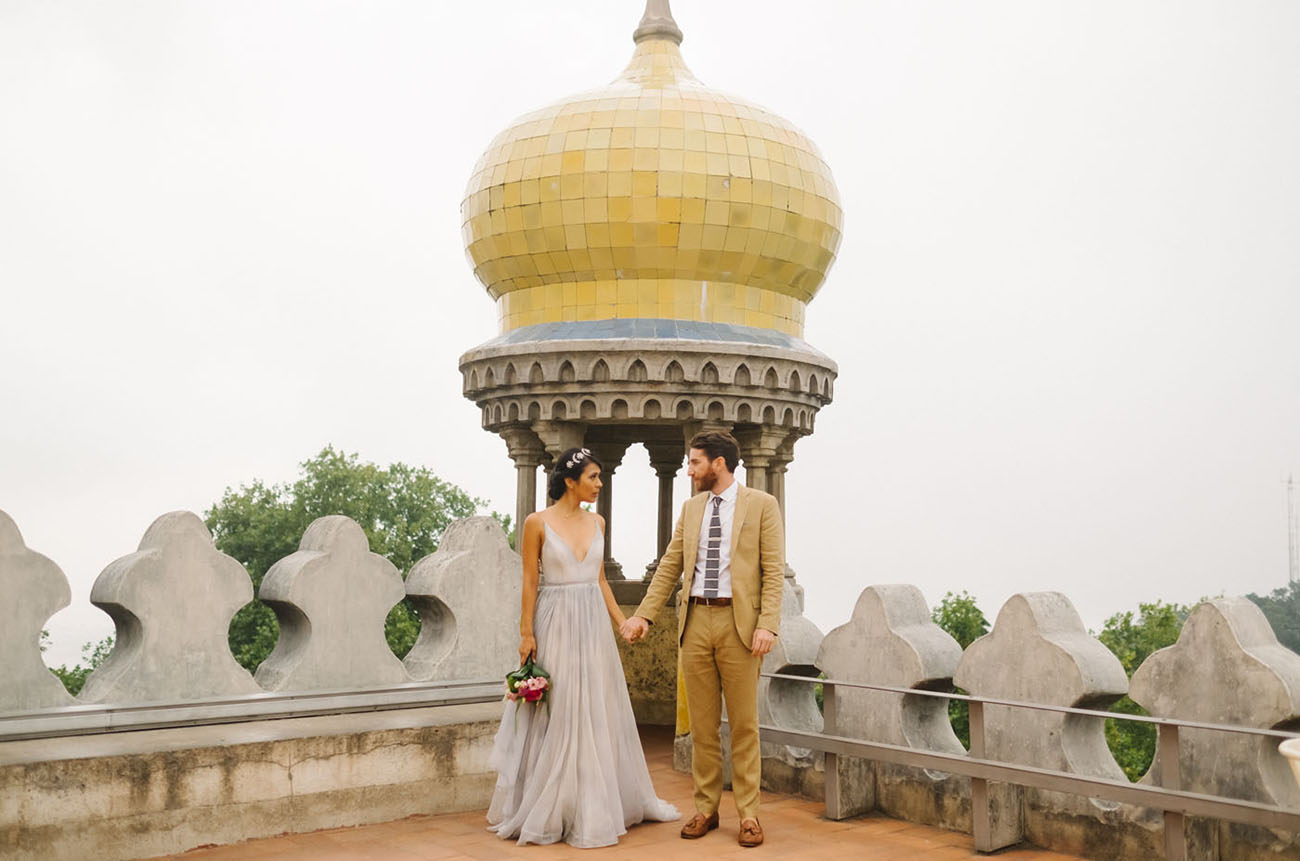 My advice for planning an elopement is to make things as uncomplicated as possible. If some aspect of the elopement starts feeling stressful, cut it out. The whole point is that you never lose focus on each other. Flowers, decorations, etc are not the priority in this set up. Also, get a good photographer! Beautiful pictures are the way you can include your friends and families in the experience.

Our photographer also had knowledge of the area and other people who work in the wedding industry. He gave me a list of people who did hair and makeup when I didn’t know where to look. He even showed us a cool bar to celebrate at after our amazing wedding dinner at Bel Canto in Lisbon. He helped guide us through the process and also took beautiful pictures. 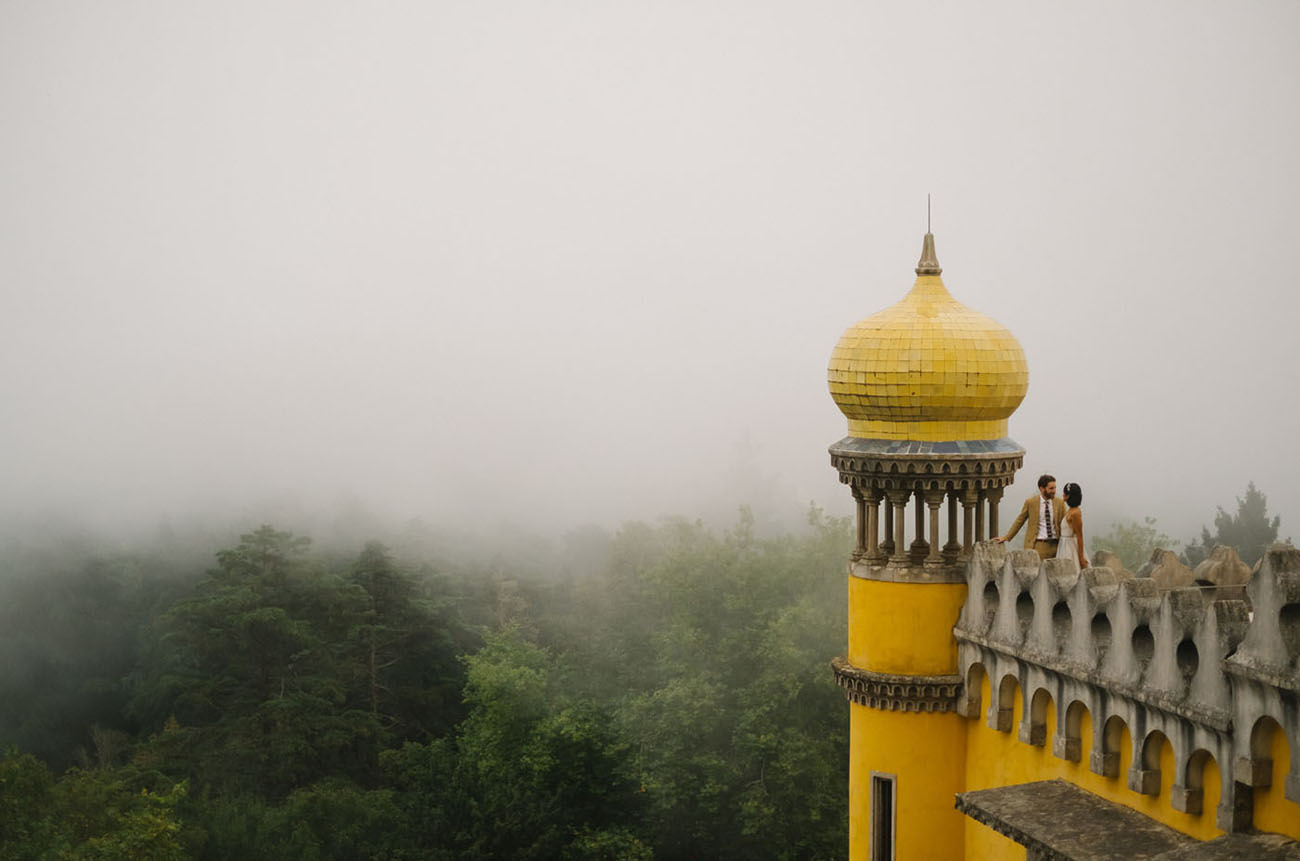 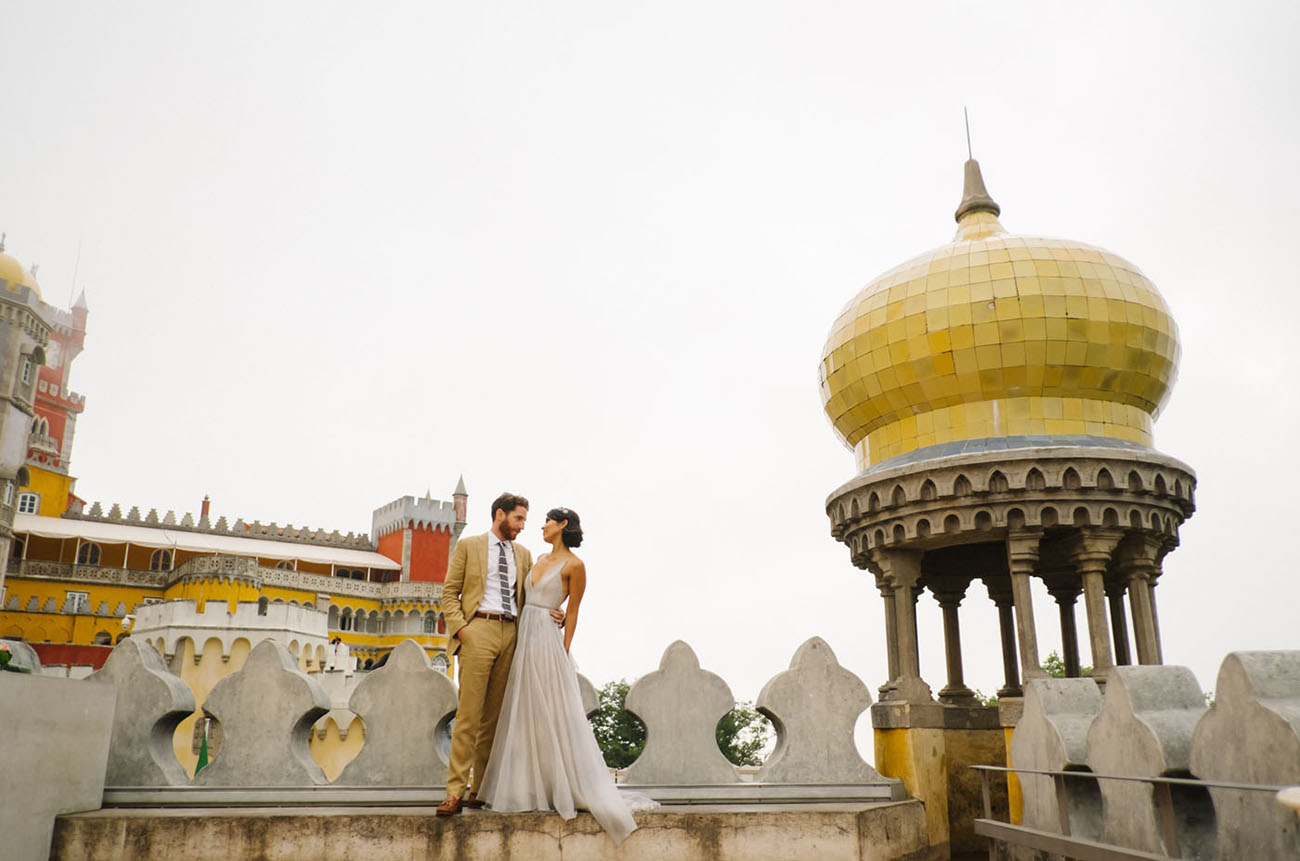 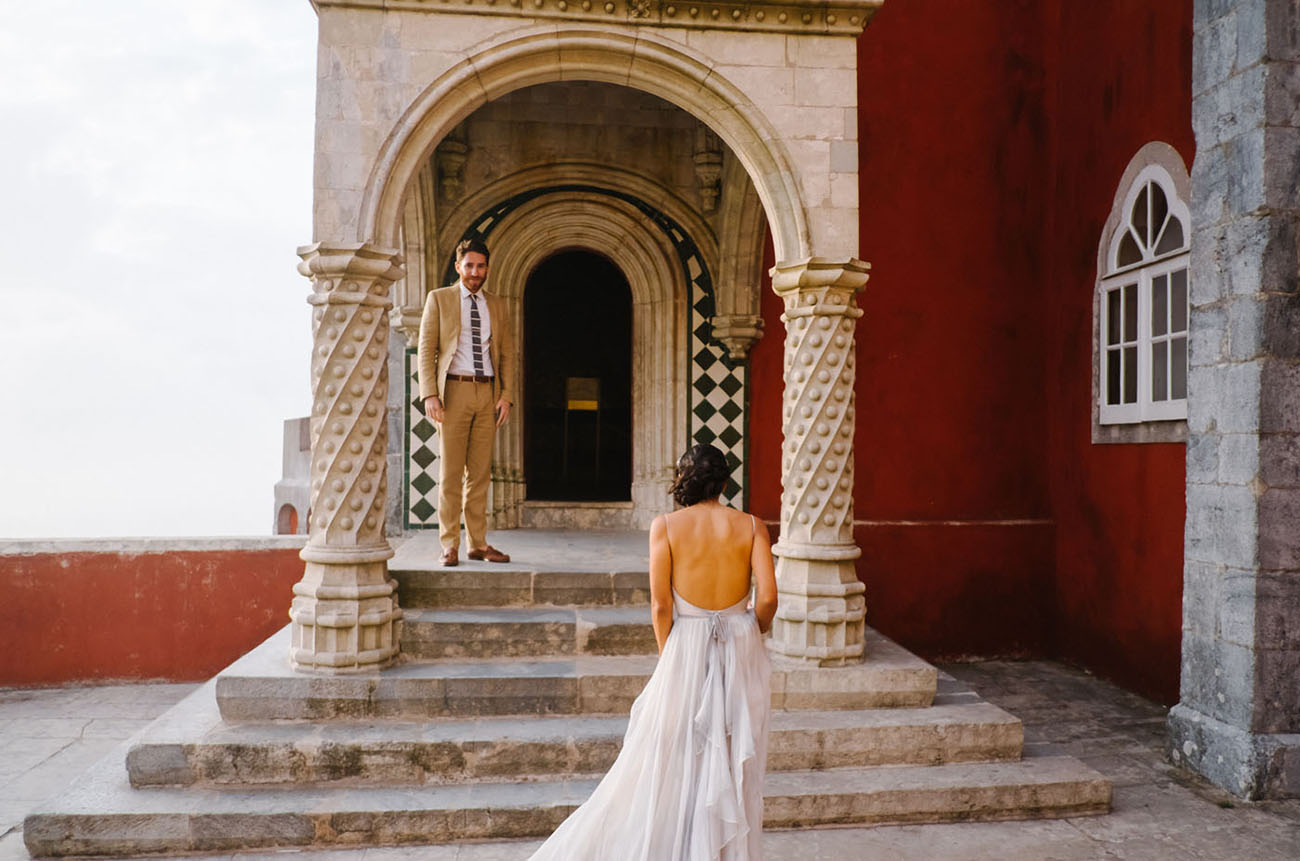 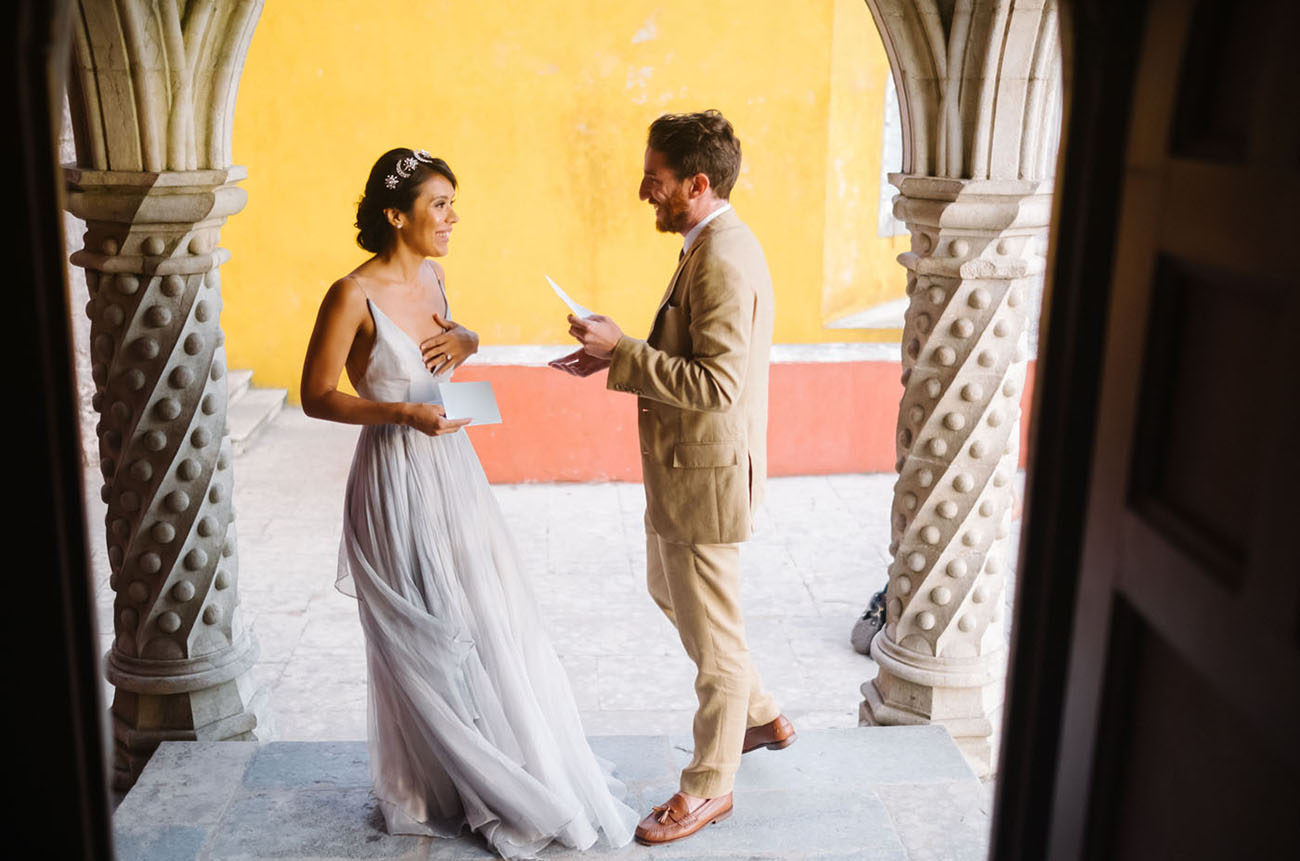 We exchanged vows in front of the palace chapel in almost complete privacy. A series of fortunate events led this to happen…we picked a Tuesday, later in the day, knowing that crowds would be smaller on a weekday around closing time. Rain was in the forecast (which never came) and it was much cooler than normal.

The only people that witnessed our vows, besides each other, were our photographer and the security guard in charge of locking up the chapel. It was amazing to have that space to ourselves to share such an emotional moment. 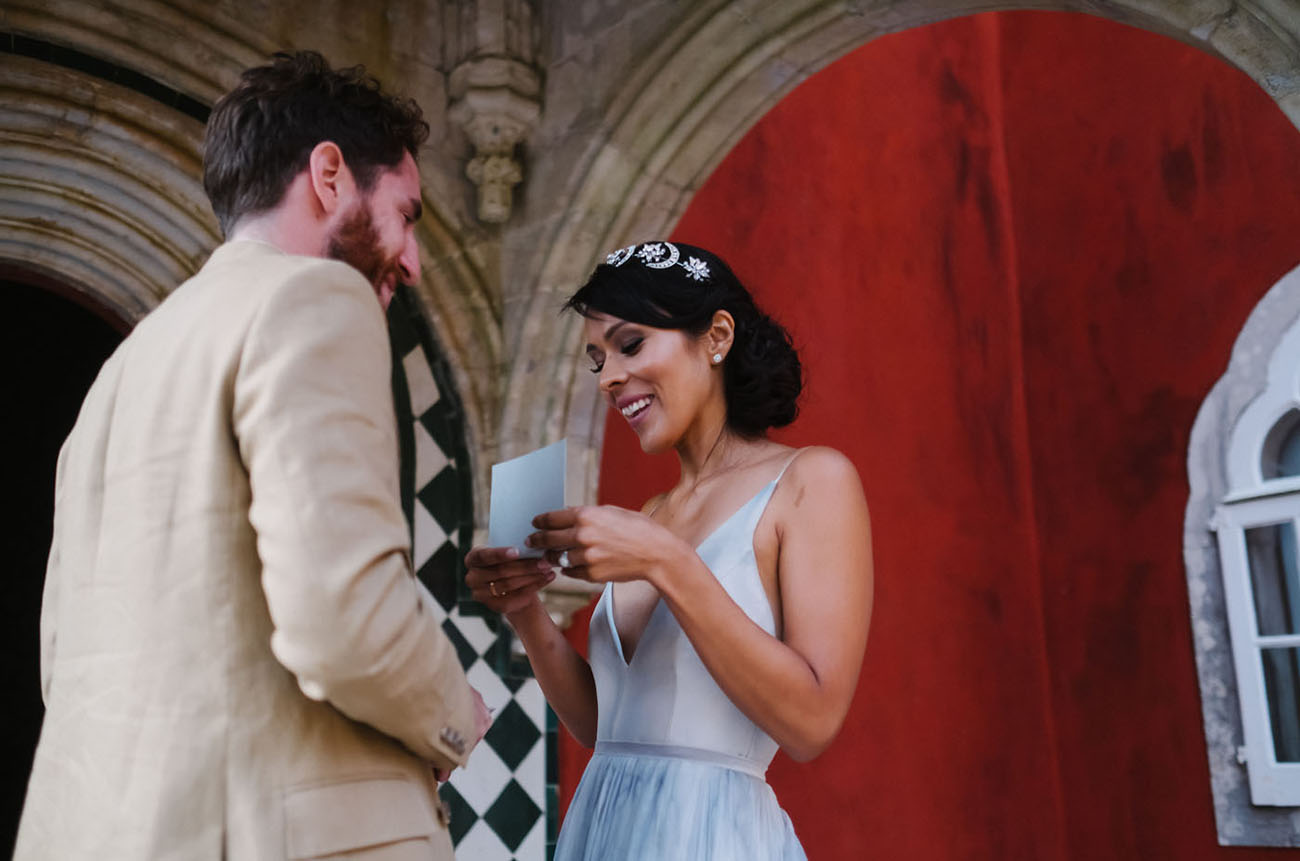 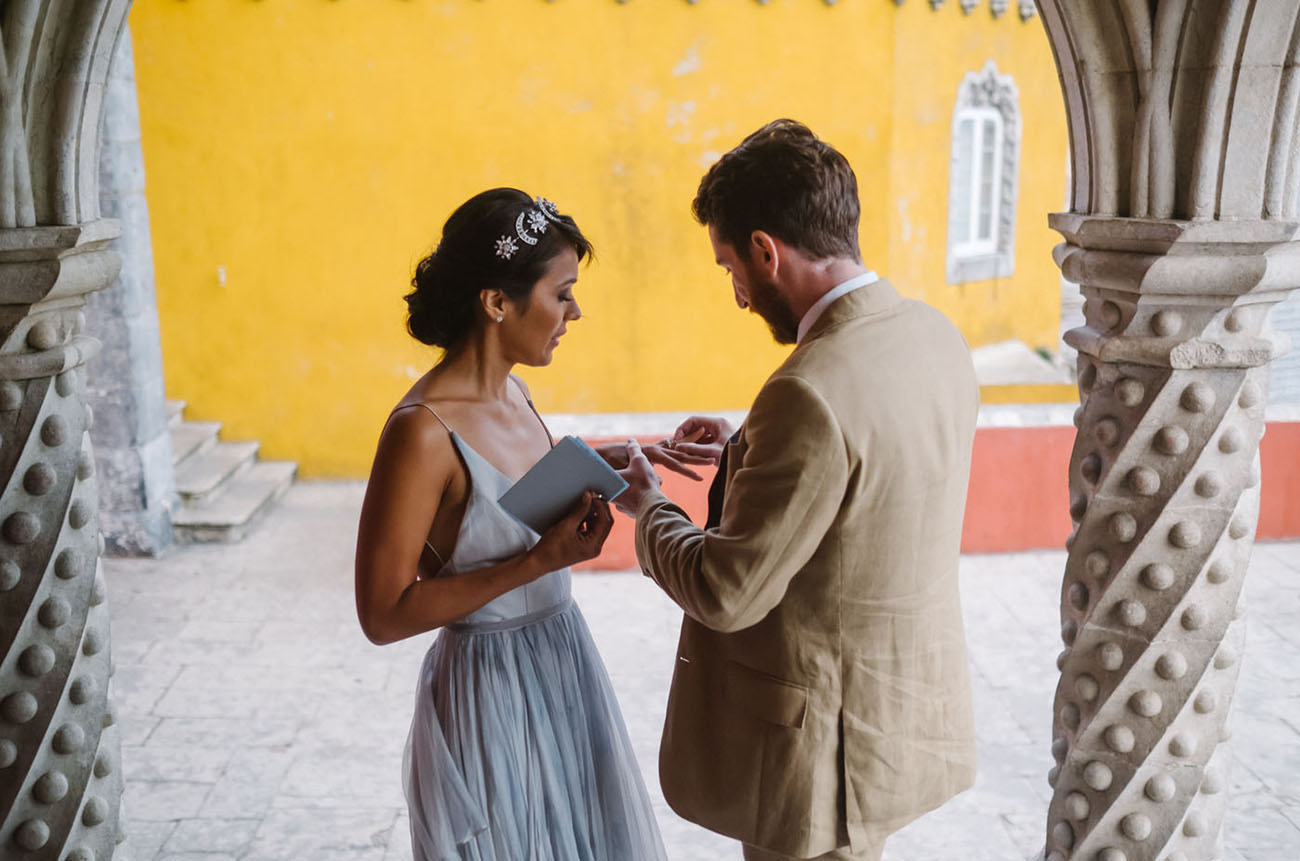 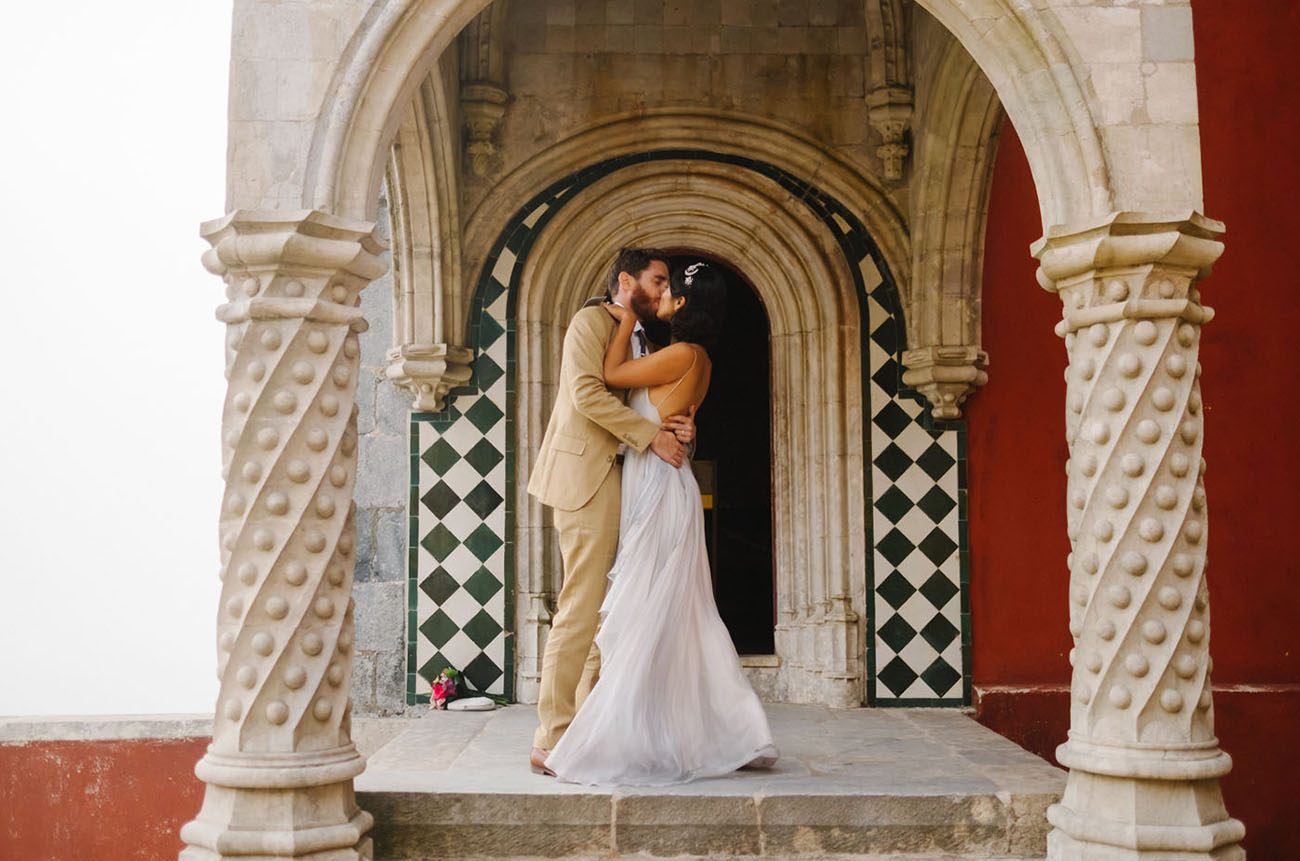 We had a brief first dance, trekked it back down the mountain, and hopped in the car heading to Lisbon. We had picked Bel Canto, a two-star Michelin restaurant as our wedding dinner. The food was extraordinary. They took great care of us and even made us a small wedding cake.

My advice to brides is to stick to their guns and plan a day that reflects what the couple is all about. Taking risks also pays off!

What a spectacular day! Congrats, to the both of you!!