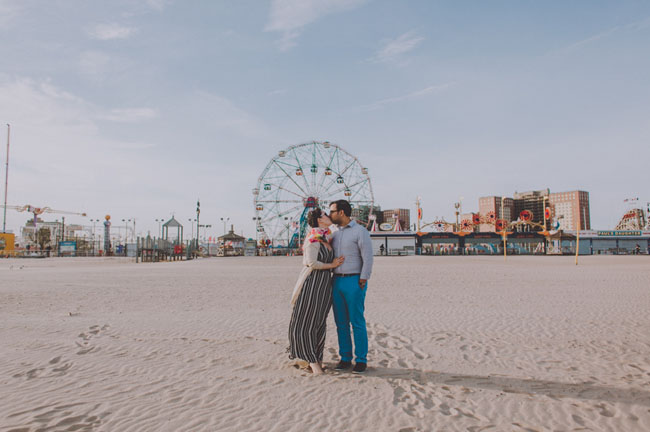 Happy Friday, friends! We couldn’t think of a better way to roll into the weekend than with this super fun Coney Island engagement shoot, captured by Amber Gress! The bride-to-be, Thea, is the talented lady behind the ultra lovely bridal accessory line Hushed Commotion, so we weren’t really surprised to see that she + her fiancé, Rachit, have some pretty spot-on style. Thea is rockin’ that decorated halo braid, bright fuschia lip + fun striped frock like nobody’s business. Right?! Such a fun match for the festive surroundings. Why don’t we hear a bit about how she + Rachit met before getting right to all the photo goodness:

Rachit and I have a somewhat fun “how we met” story – it all started on Twitter. Both of us are from NC, but we met in NYC. A mutual friend of ours “announced” Rachit on Twitter when we moved up to NYC and I decided to hit the FOLLOW button. As time went by we noticed we had a lot in common, especially when it came to food and adventures each one of us embarked on around NYC. After about 3 months of banter back and forth on Twitter, I asking him out on a food “friend date”. We had a blast. Two and a half weeks, and 5 dates later it was pretty obvious that we were both really excited about this. Rachit had planned a long trip home to NC for three weeks that month, so we parted ways but kept in touch. The day he got back, we arranged another food adventure in Bushwick and the rest is history: 4 and a half years later we are still taking adventures and still obviously really excited (and in love!) with each other. 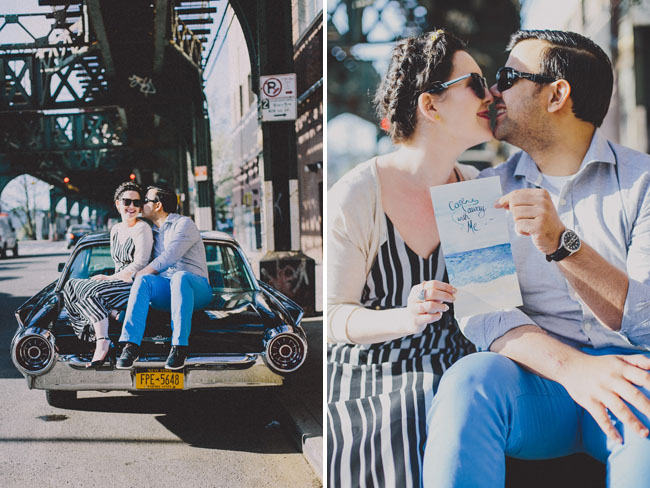 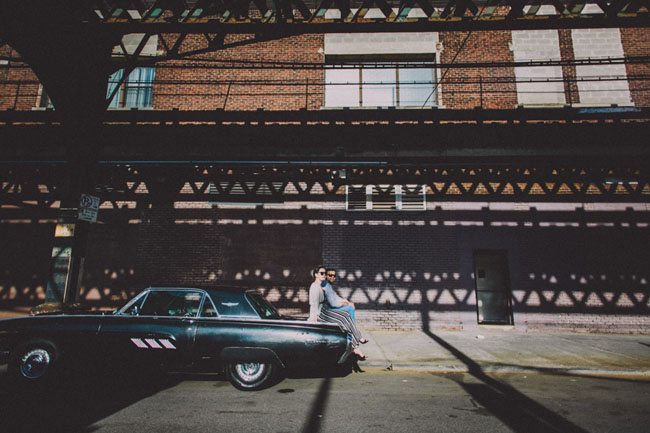 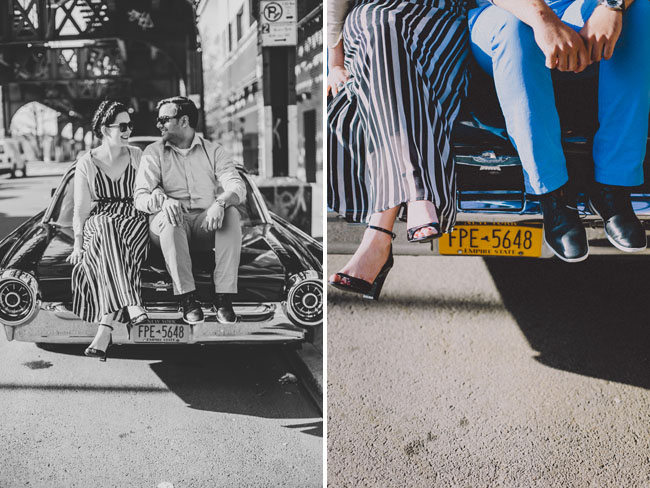 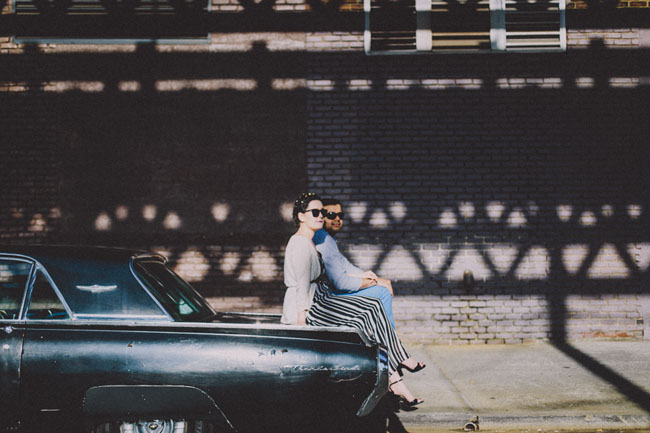 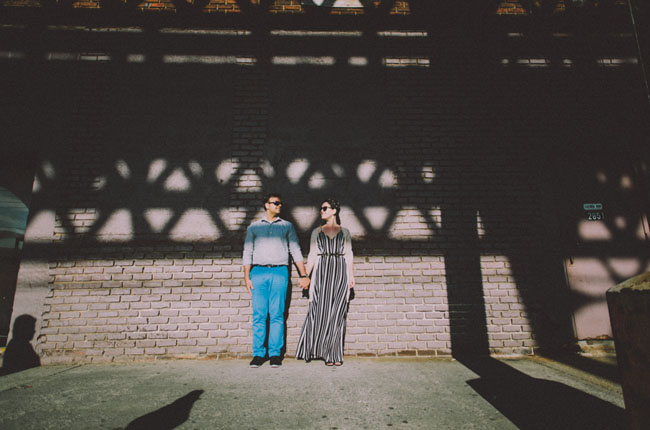 When I planned our engagement afternoon, I wanted it to feel like an extension of ourselves. We often take day trips outside of NY or to out of the way parts of the 5 boroughs, so when a friend of Ambers had a super sweet Thunderbird we could borrow – it all became clear. Rachit loves cars and I love anything vintage. 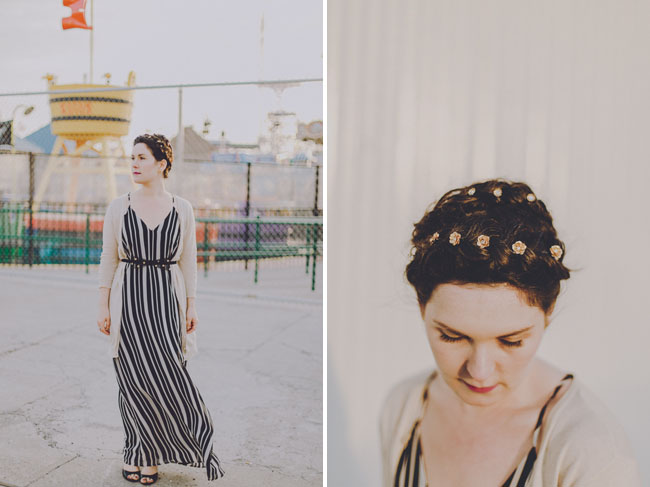 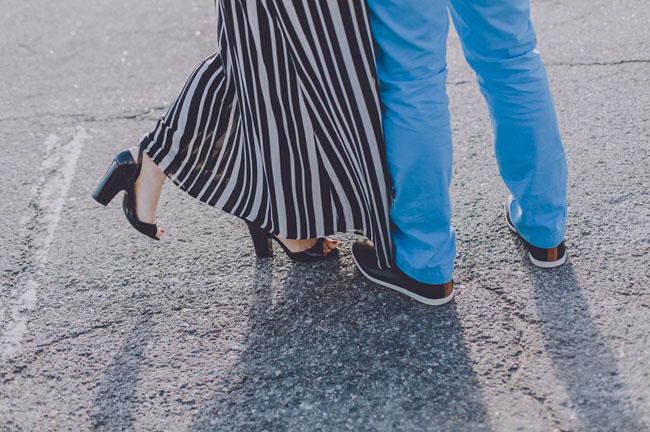 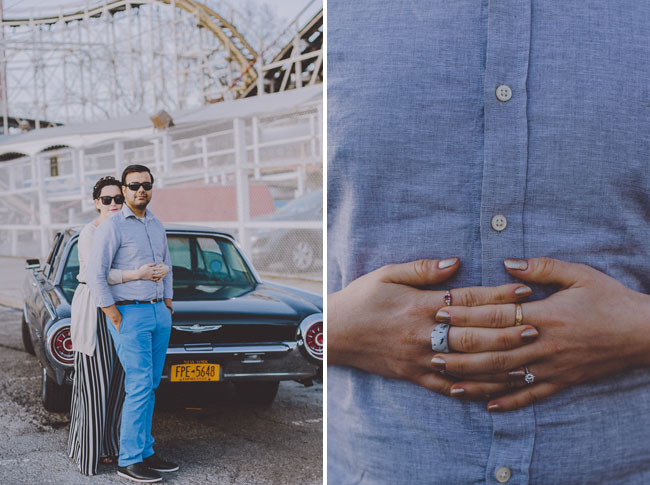 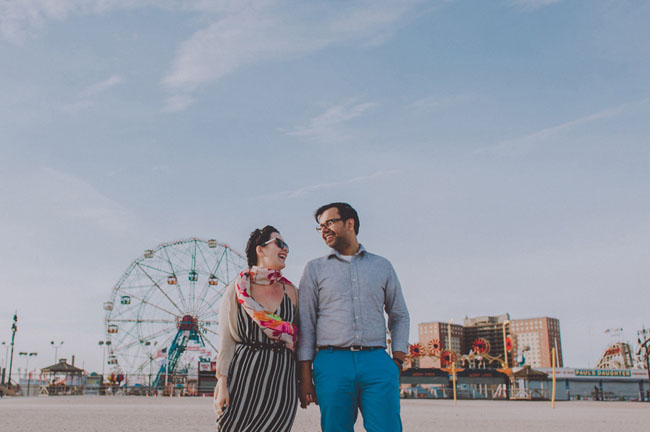 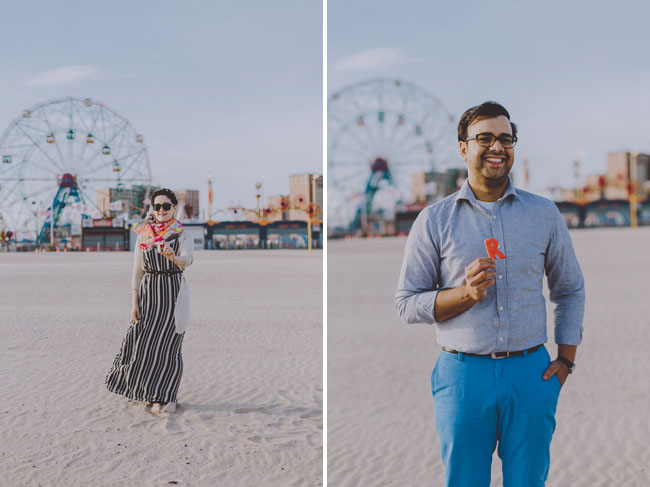 Thea + Rachit enjoyed champagne + cookies during the shoot. Shouldn’t all e-sessions include such delish luxuries? We think so! 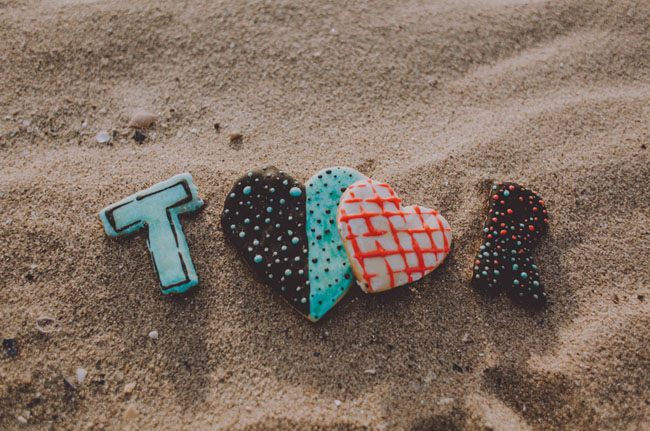 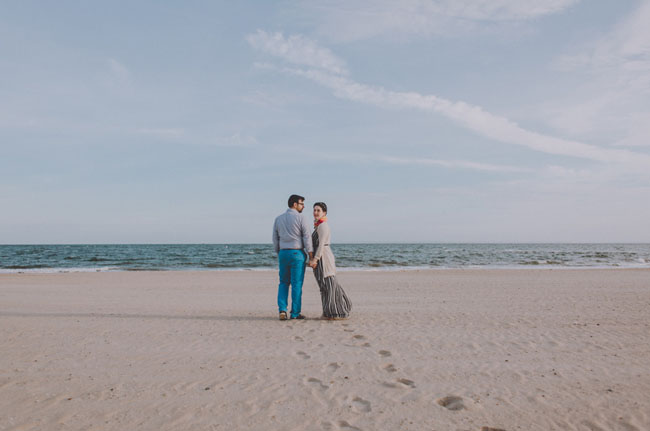 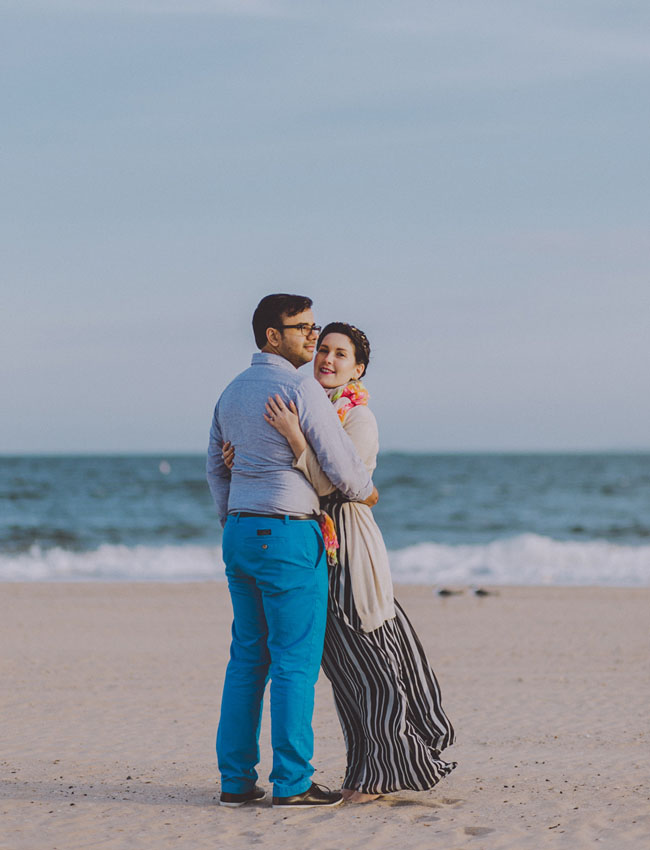 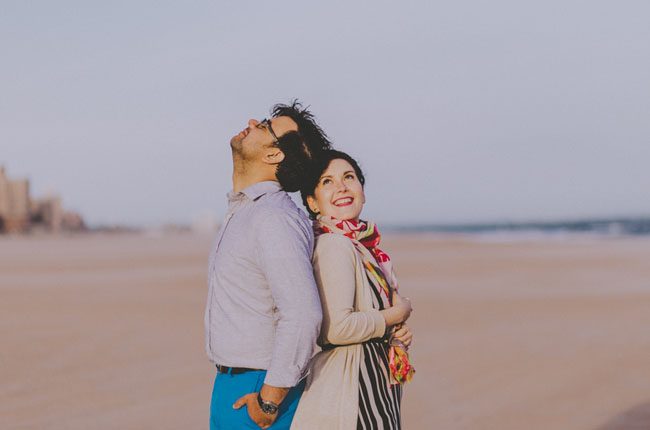 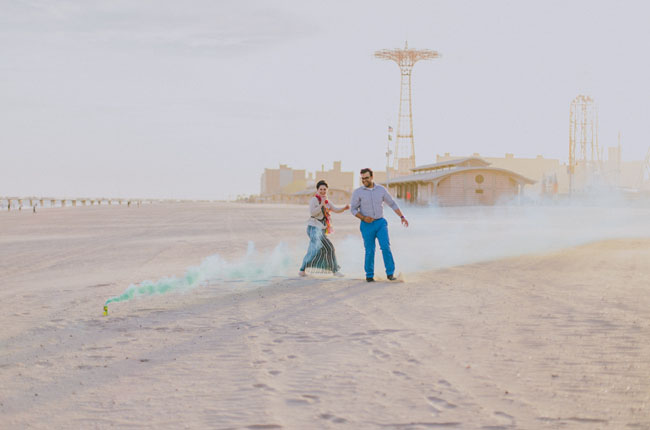 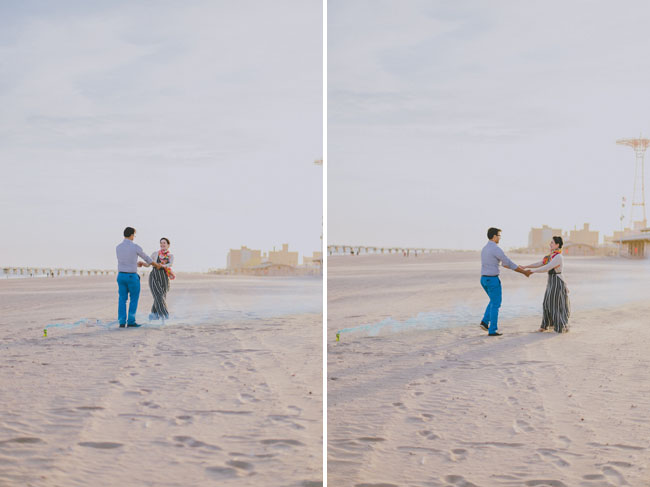 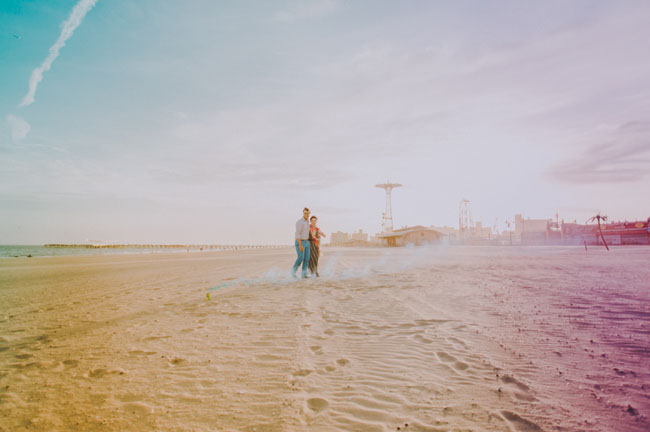 Obsessed with these frames filled with colorful holi powder! 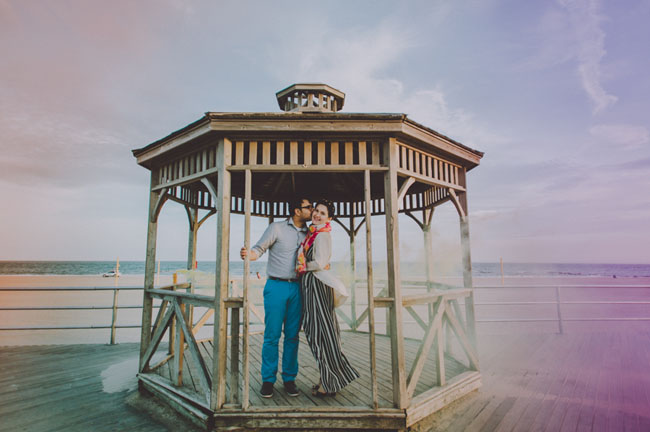 Such a fun shoot! Big congrats to Thea + Rachit and best wishes for your upcoming wedding!