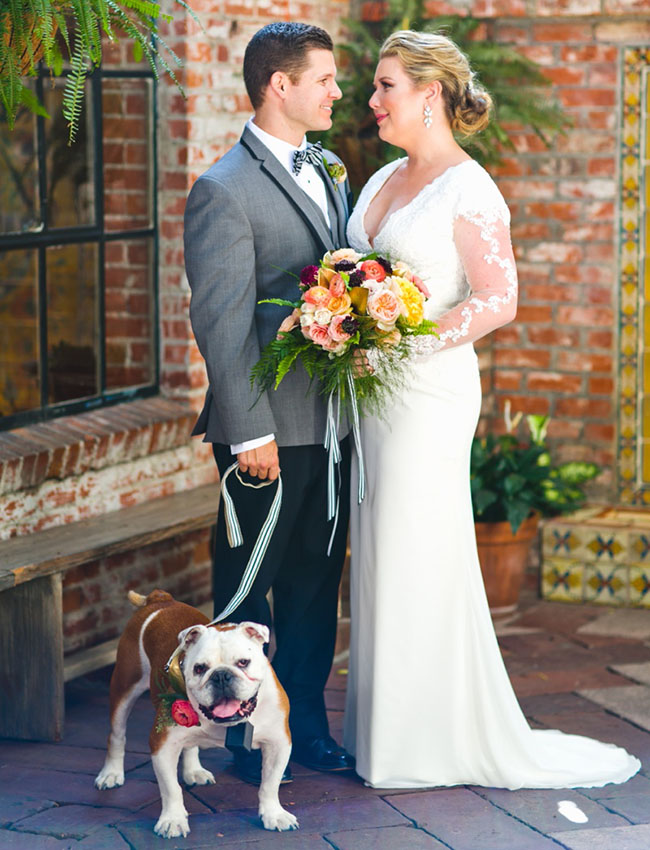 It doesn’t get much better than today’s sweet wedding, planned by the lovely Kristeen LaBrot at LA’s own Carondelet House. Brittany + Brian infused the setting with plenty of DIY details that were reflective of the two of them. Britt said, To make sure it wasn’t all about me (cringe – I am a complete non-believer in the ‘it is your day’ mentality) and it was really about us, the decorations I chose reflected both of us. I loved the black and white awnings outside of the venue and decided to use that masculine graphic inside as well. The modern black and white mixed with the gorgeous romantic flowers in rustic wood boxes were beautiful together.

She goes on to say, The goal was to throw a beautiful, heartfelt, classy, and ultimately, really fun dinner party where we’d just happened to have gotten married a few moments earlier. That really put the onus on us to make sure that we set the right tone.

Spoiler Alert: they so, totally achieved their goal. Just wait ’til you see all the pretty Jackie Wonders captured from the day! 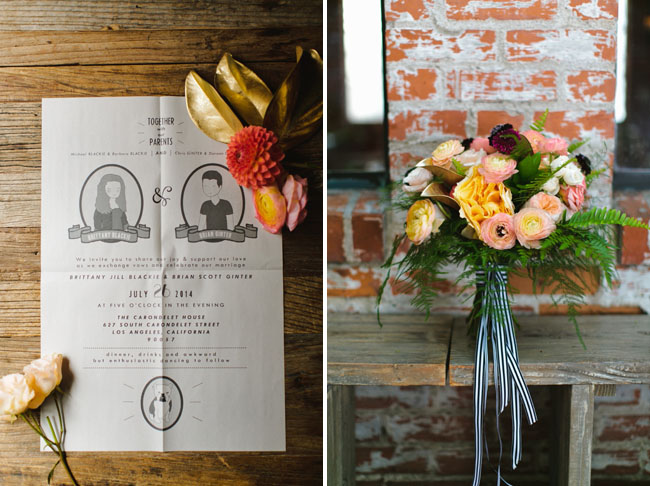 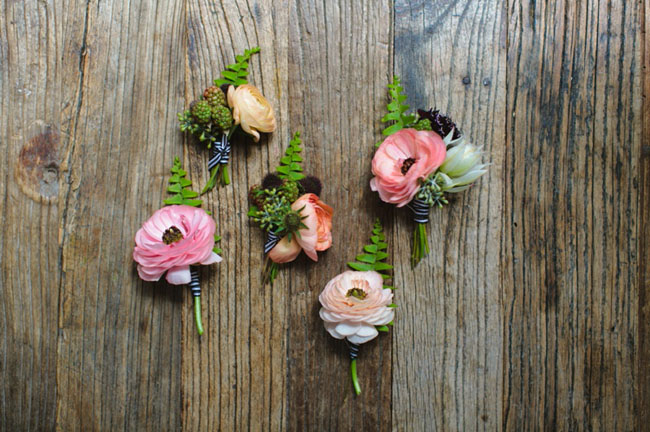 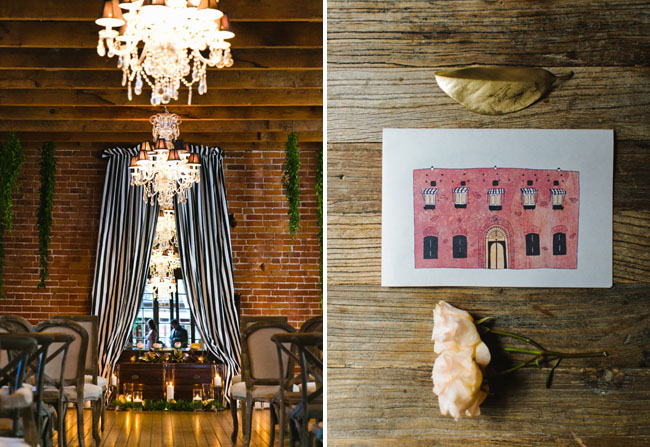 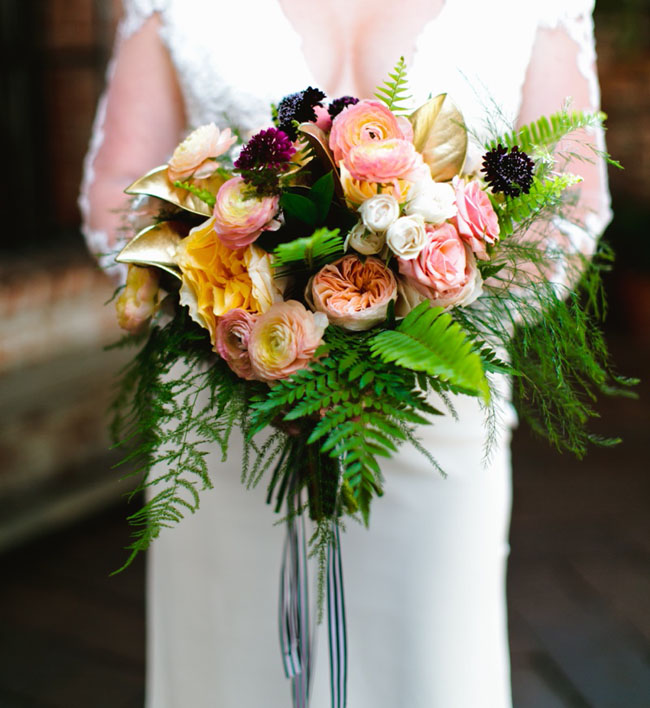 The Little Branch knows how to whip up a good bouquet! Adoring this pretty garden rose + ranunculus filled beauty. 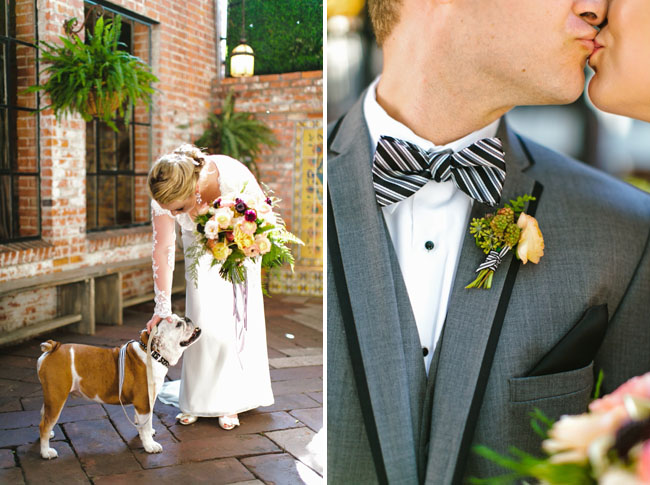 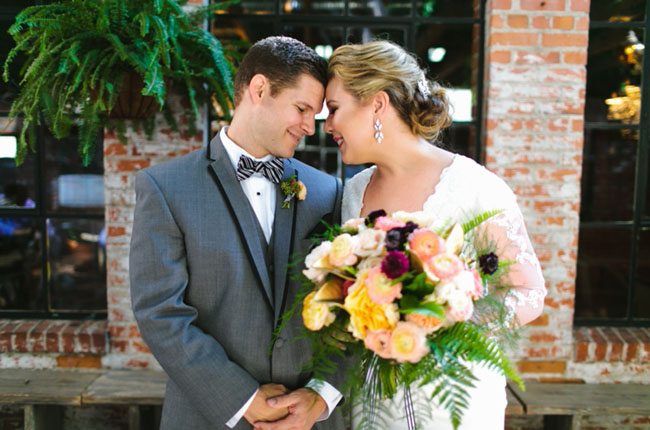 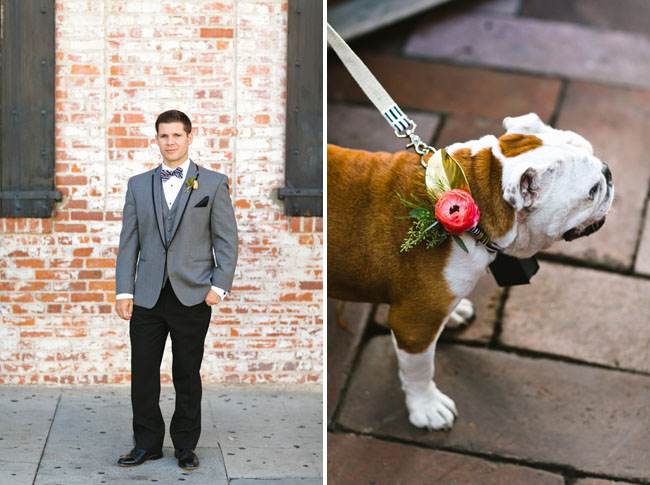 B+ B’s guests were given a clue from the get-go that they were attending a wedding just a bit different than the norm: Rocco, their bulldog, was the unofficial ring bearer! 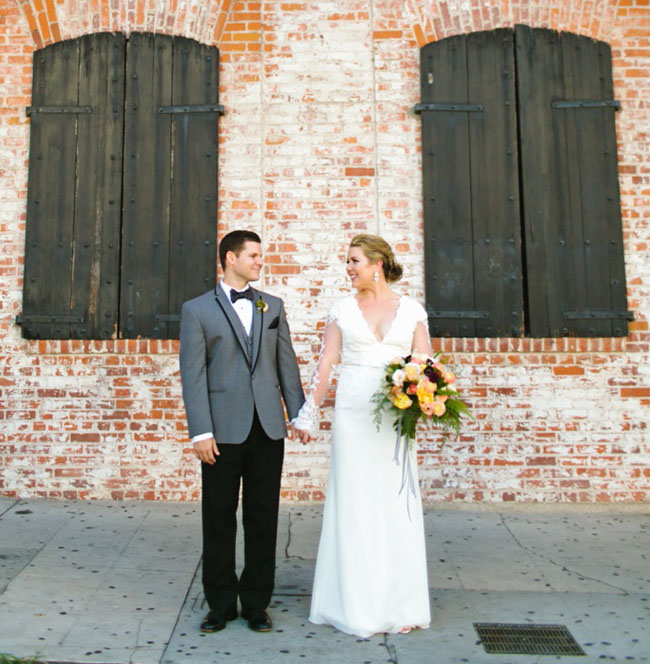 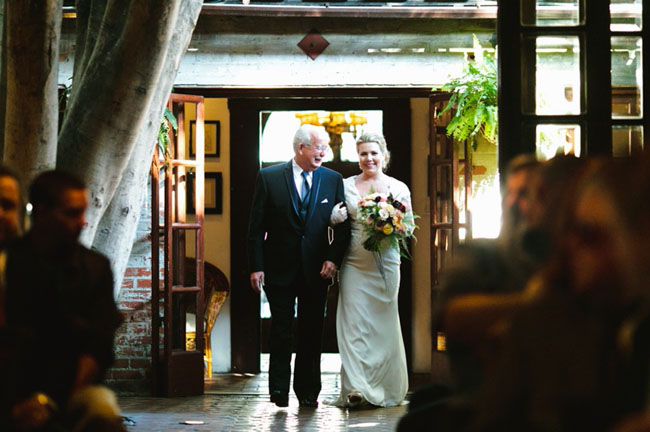 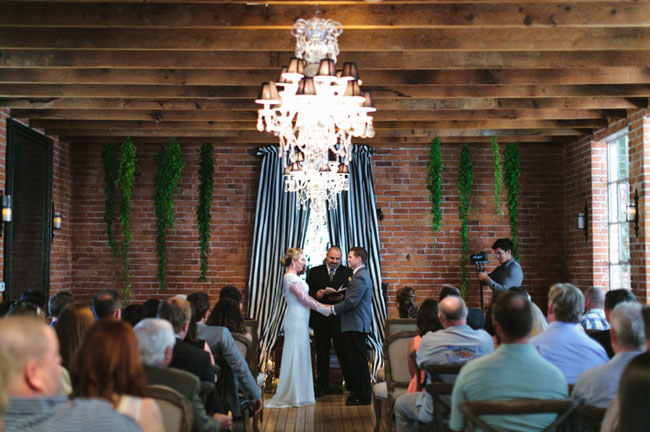 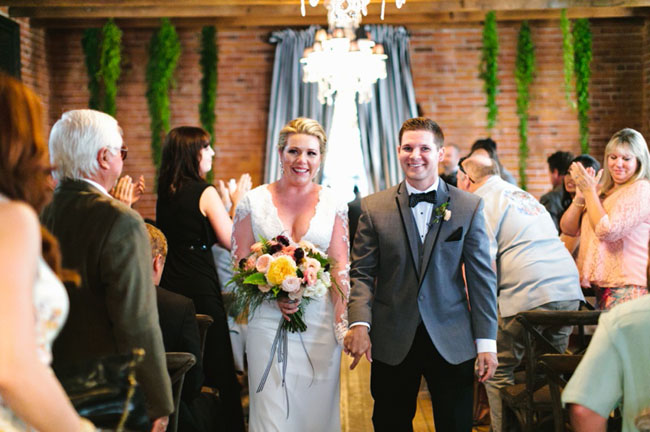 There were so many amazing moments but for me there are 2 that I will never forget. One is when
Brian and I were together after the ceremony. We had just taken photos and were alone for the
first time after being married. We were in the back alley behind the venue getting ready for our
grand entrance. For me time stood still. It was so nice to be alone and look at him and see how
happy he was. It made my heart melt and explode at the same time. I was and am still so
overjoyed that he is my person.

The second was the welcome speech my dad gave just as everyone sat down at dinner. He spoke
so eloquently about individuality, support and partnership within a marriage. He and my mother
were, and are, so happy and proud of both of us. Their happy faces are something I’ll cherish
forever. 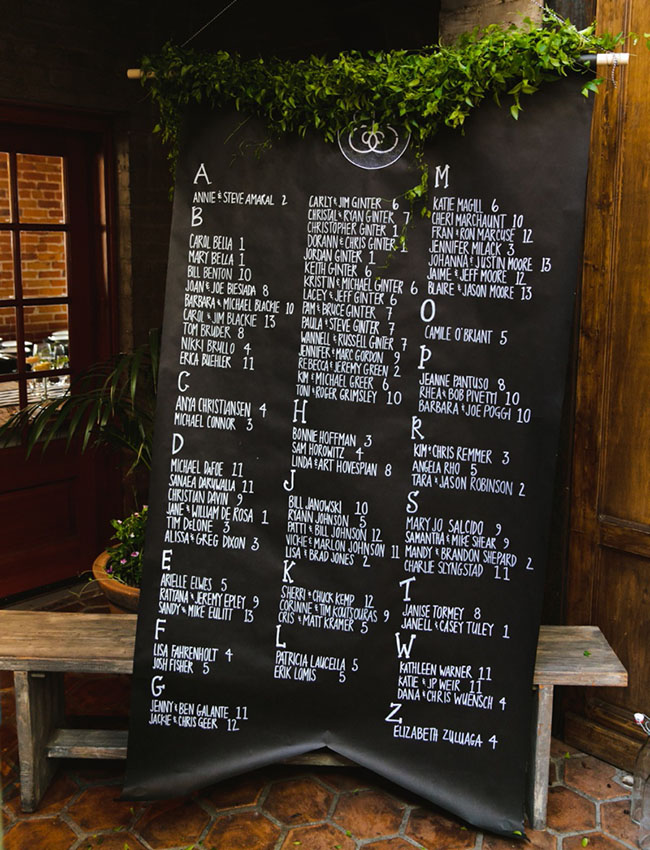 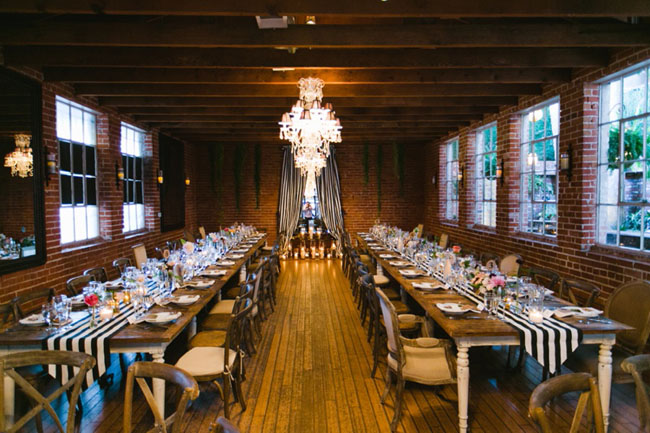 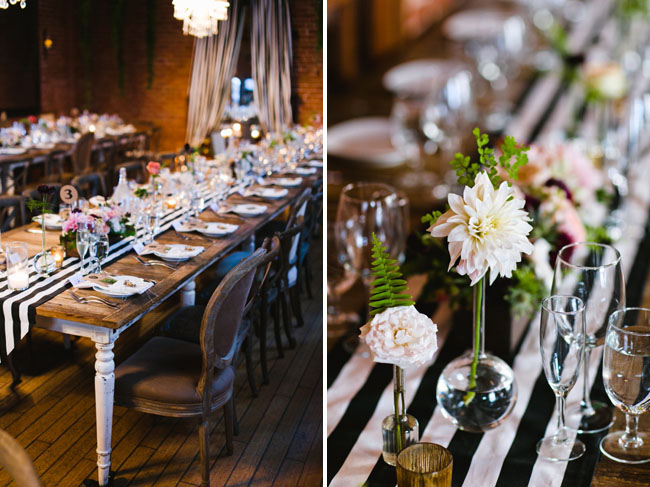 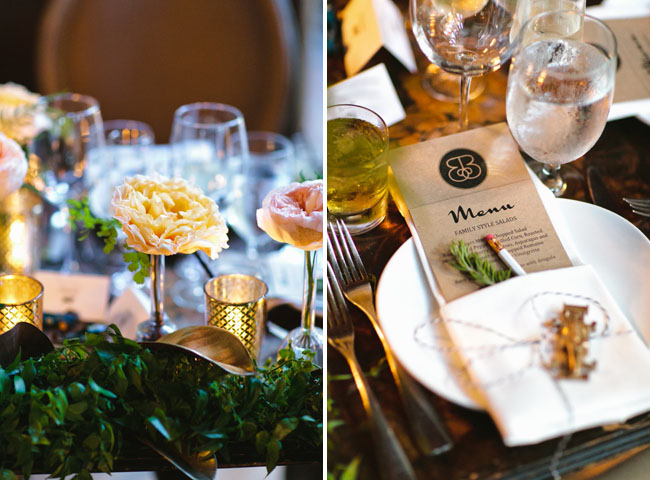 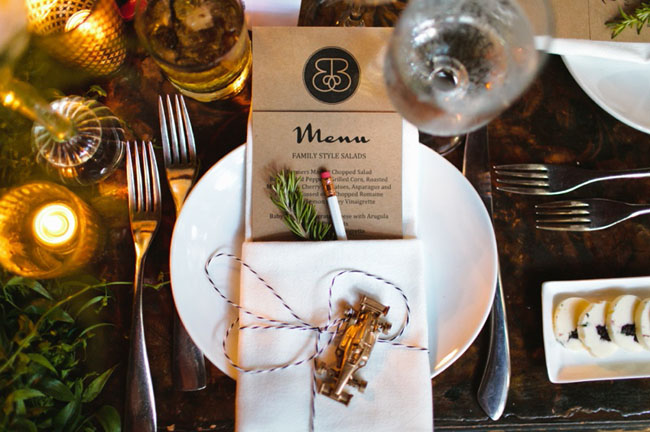 We race cars as a hobby so gold painted race cars were on all the place settings. Instead of the ‘his’ and ‘hers’ seat signs I made our ‘Shortstop’ and ‘3rd Base’ for our respective positions in softball where we met and it all began. 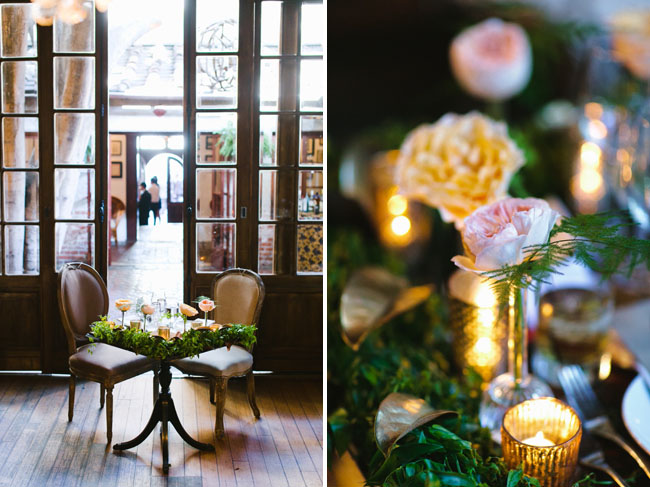 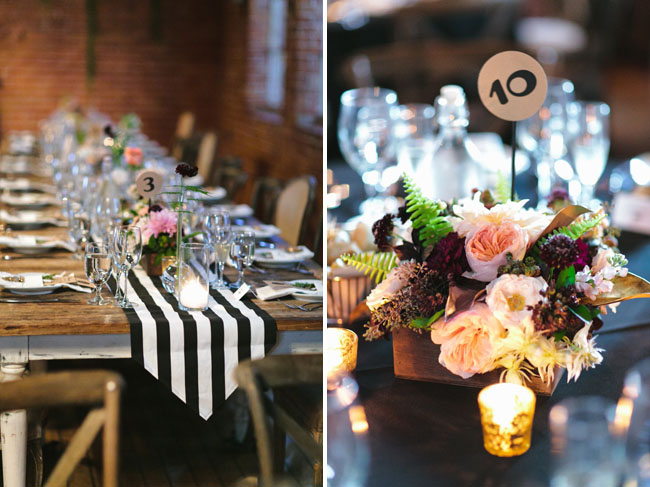 Try to plan a low-key morning on the day of your wedding. Whatever you typically do to chill out –
do it. You hopefully will have everything prepared by then anyhow. Brian and I hung out that
morning which was so nice and I think really helped with my nerves later on. I then had a nice
casual breakfast with my best girlfriends before the real hectic preparation began. That nice slow
going morning set my mood and the pace for the day.

I feel uncomfortable being the center of attention which is obviously a problem at your own
wedding! I know this is a common fear and anxiety. I would just say to other shy and/or nervous
brides or grooms that this is your wedding and if something is going to give you the hives – don’t
do it. (I literally break into a rash when I’m in front of large groups and get nervous – hence our
five minute ceremony!) Those anxieties led to us skip things like the garter toss. Not one perso
has mentioned to me the things we didn’t do. They have however mentioned how happy w
looked and how much fun our wedding was.

If you can, hire a coordinator. Many of the details I mentioned above happened seamlessly
because I had Kristeen LaBrot running the show. She allowed me to enjoy the day so much more
because I was no longer worrying about, well anything. It was wonderful to know that all of those
details and all my worries that we’d spoken about in the weeks and months leading up to the
wedding were in her capable hands.