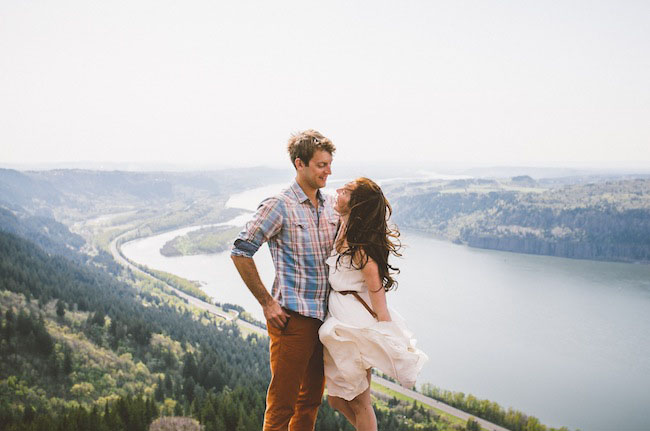 When a couple LOVES the great outdoors as much as Kara + Pete do, it’s a must that it be the backdrop for their engagement photos. We like to think your engagement session is the perfect opportunity to play around a bit + have fun! And it sounds like these two agree with that notion! For them it was only a matter of finding the perfect spot, so when their talented photographer, Christy Cassano-Meyer, presented them the idea of hiking Angels Rest in the Columbia River Gorge (almost 5 miles and 1500 feet of elevation!) they were nothing but excited and ready for the adventure! And the results are nothing but stunning. We’re sure Kara + Pete will cherish these photos for years + years to come! 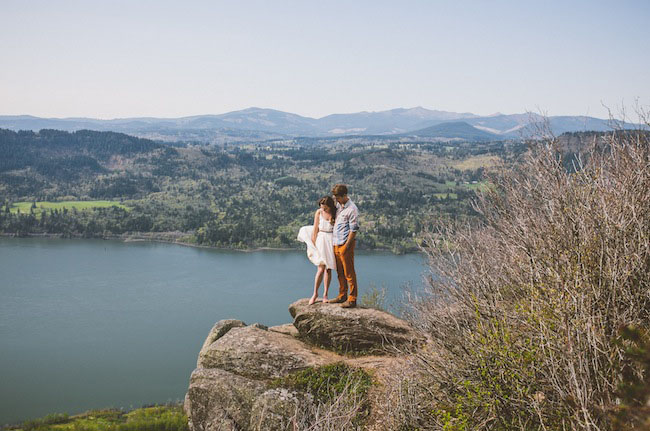 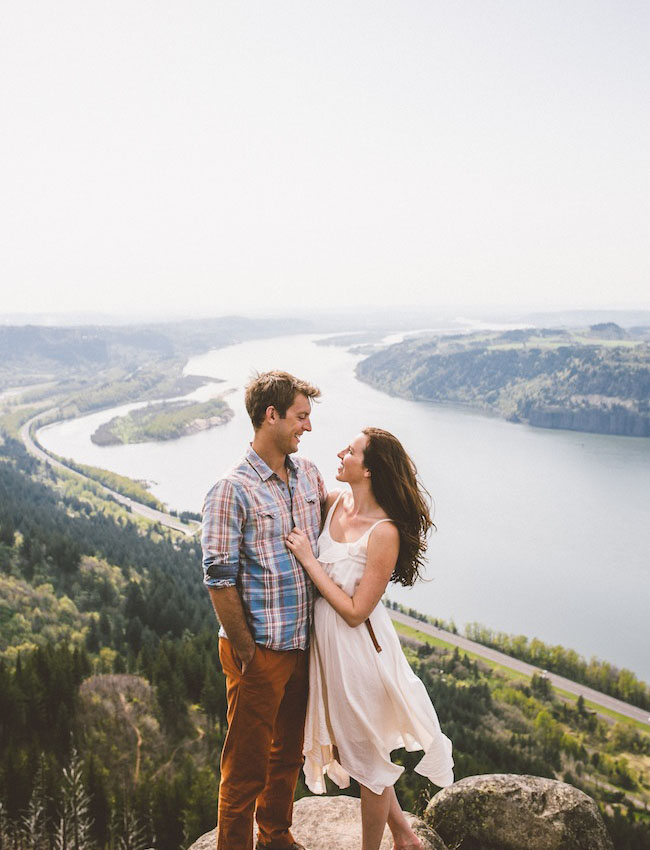 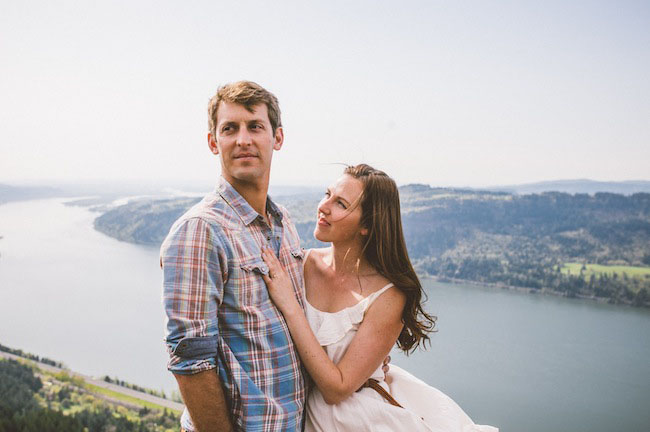 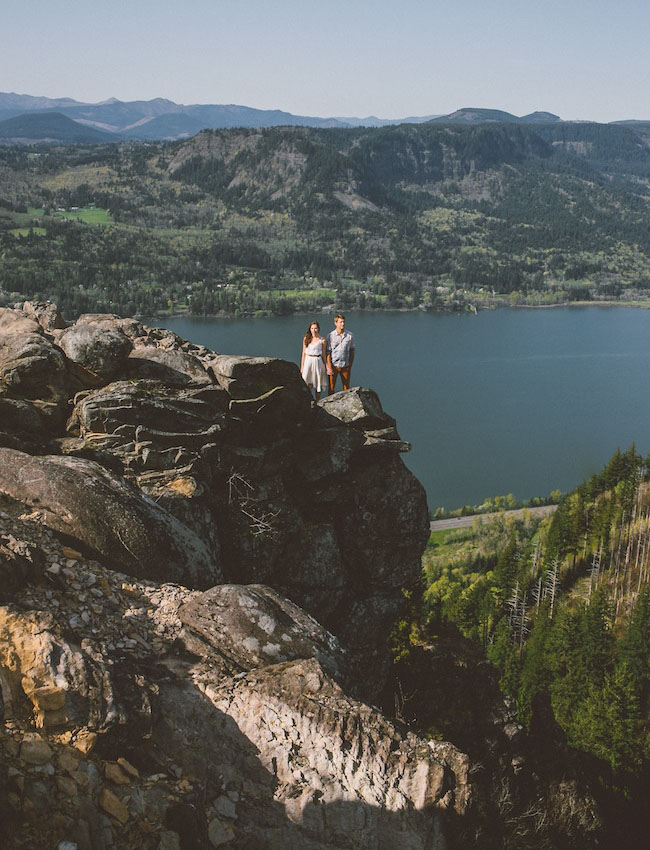 From Christy, The day of the hike they were total troopers! We drove the hour outside of the city of Portland together ready for the hike. They packed two changes of clothing each, plus makeup for Kara, and we began the climb. After reaching the top, they put on their first outfit, but after taking a few photos we realized the sun was still too high in the sky. So, we hiked down halfway to the forested area, changed into the second outfit and snapped away. After that, we climbed back up to the top!! It was closer to sunset now and after another outfit change we caught the last hour of daylight. The view is stunning, and these will forever be some of my favorite photos ever taken! Oh, and by the way, we stayed up there so long we hiked down almost entirely in the dark. It was a pretty awesome day. 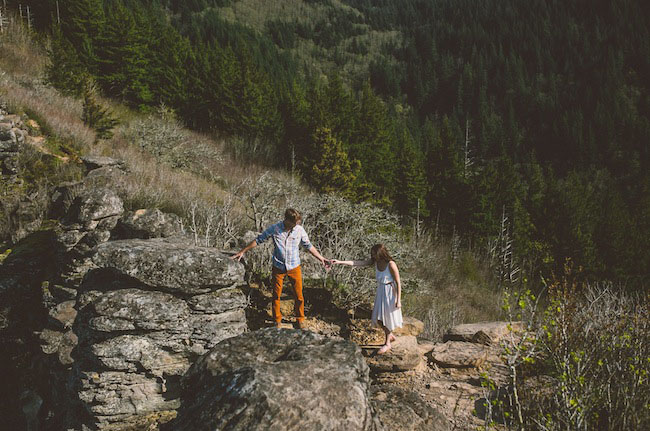 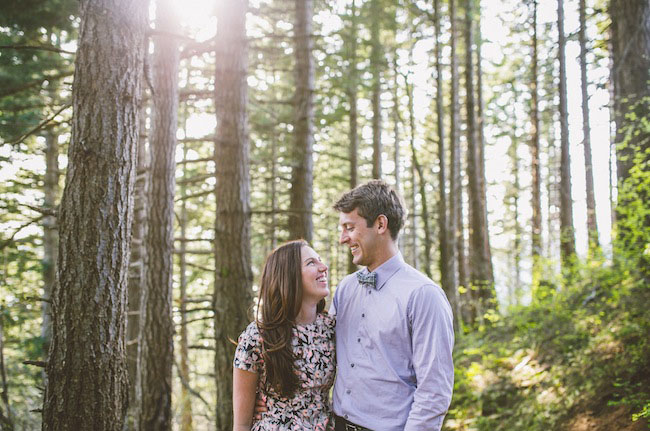 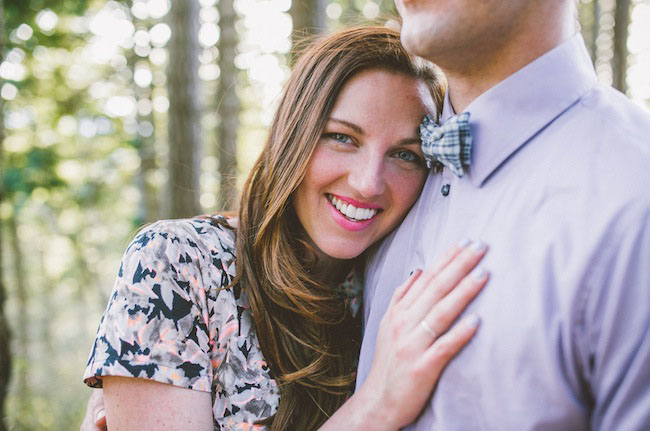 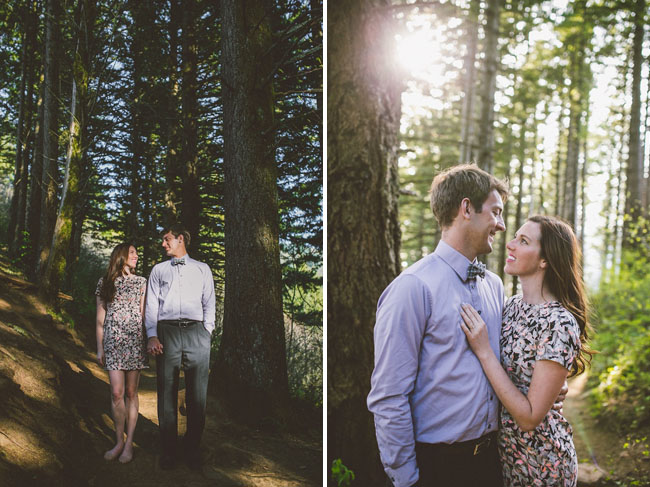 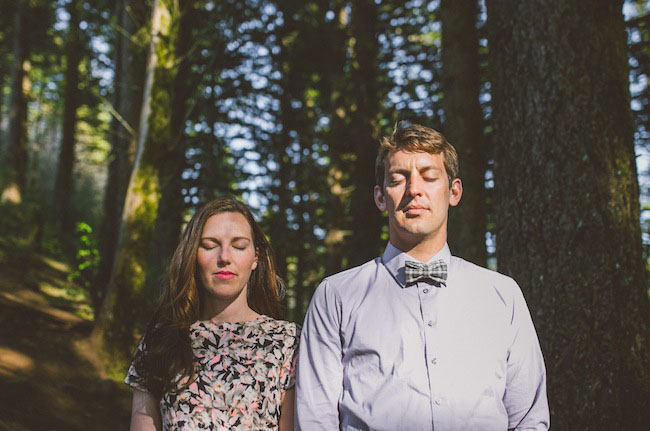 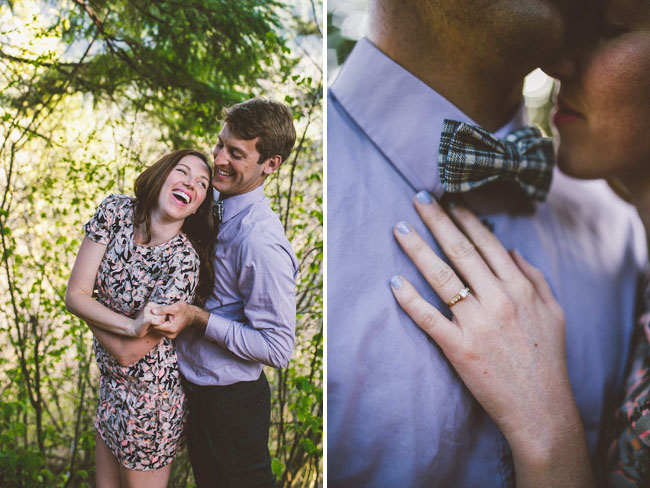 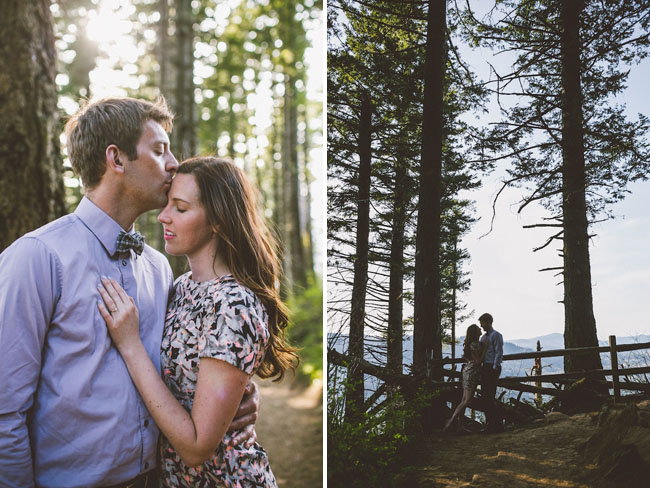 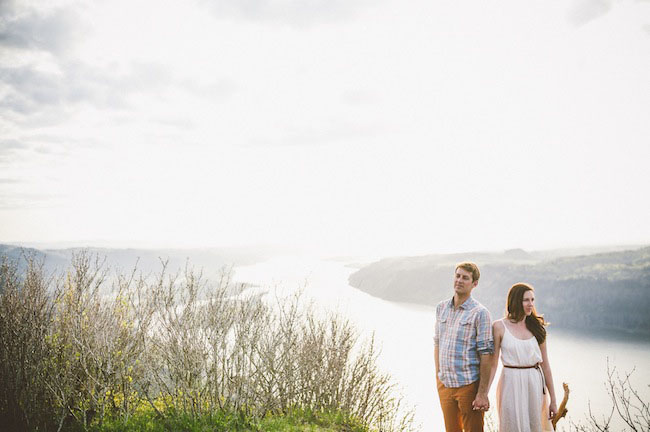 Such a gorgeous spot! 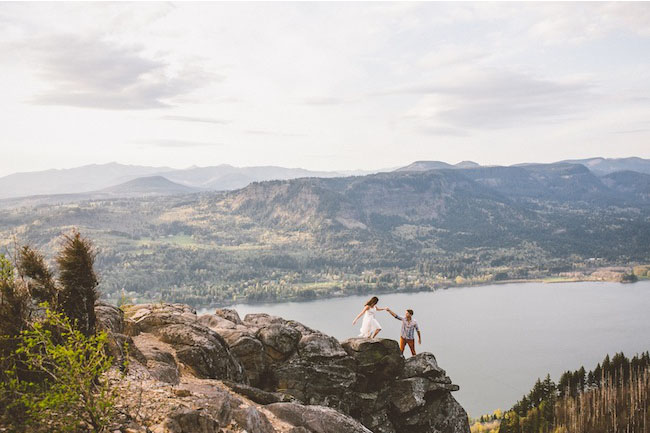 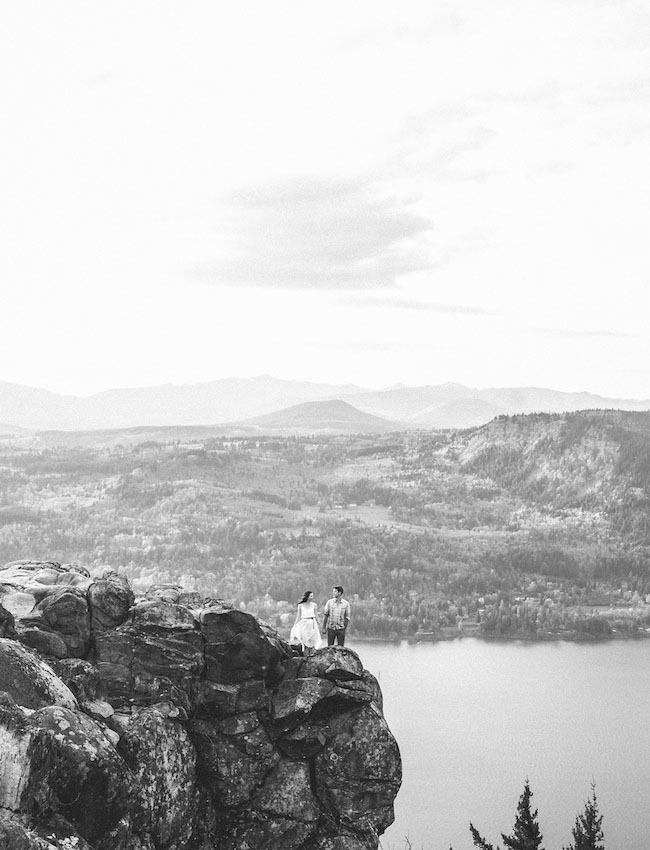 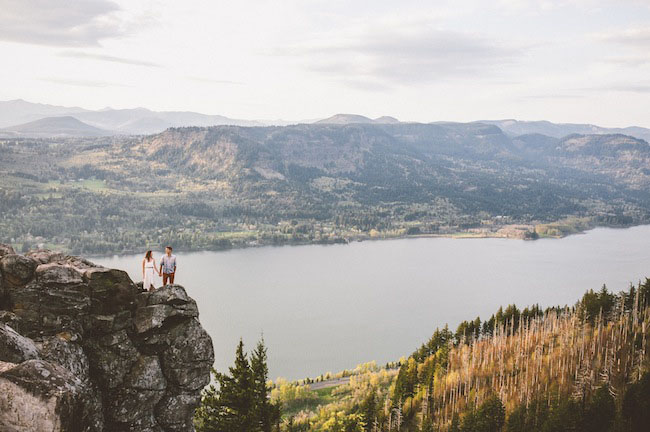 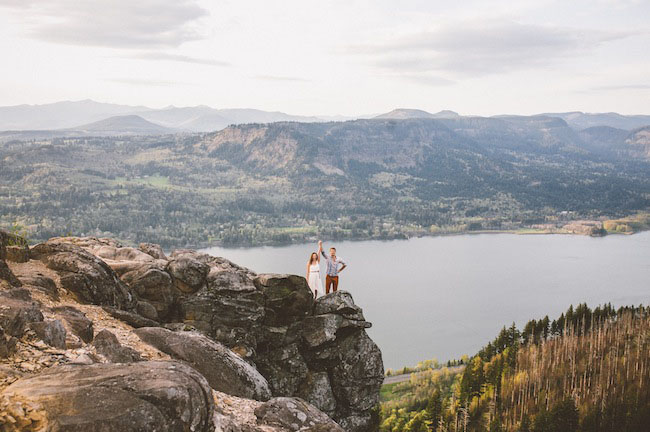 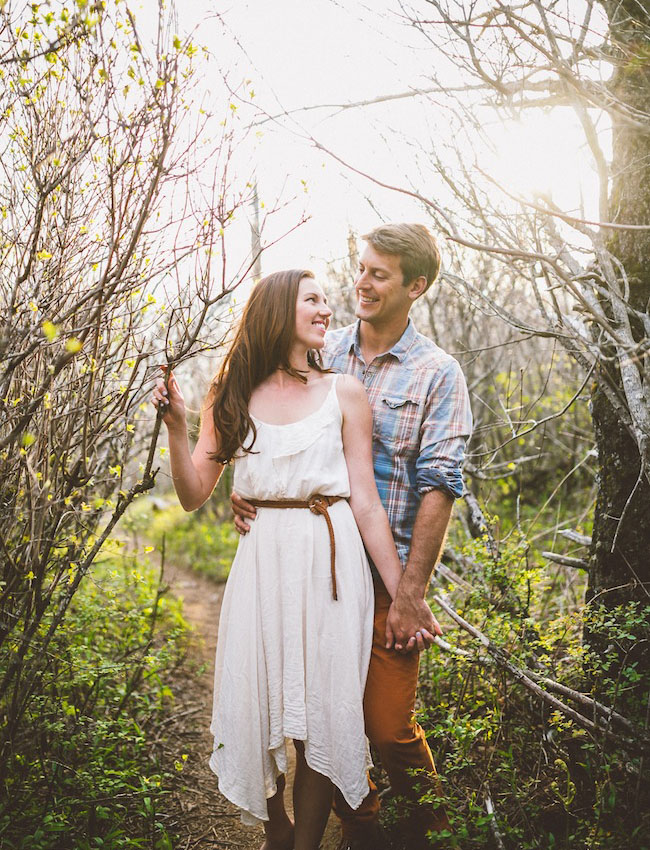 Kara shares how she + Pete met and their super sweet proposal story below:

Pete and I met on a streetcar in Portland, OR. He was on his way to have knee surgery due to a backpacking injury and I struck up a conversation with him about why he was carrying crutches. After chatting, we realized we were both going back to school to become Physician Assistants. For months, we were simply friends, classmates and study buddies, but at the stroke of midnight on New Year’s Eve we shared our first kiss.

I had lived in New York City, a place close to my heart, prior to moving to Portland. Pete contacted family and close friends in secret to help coordinate an engagement dinner party at The Dutch restaurant in SoHo months before he proposed. Still in Portland, Pete proposed one evening on the iconic Hawthorne Bridge before whisking me a away on a flight to NYC. It was an unforgettable surprise to show up to dinner across the country and be greeted by everyone I love.

End Note: Our hard work has paid off! A few weeks ago, we were both accepted to the same Physician Assistant program in Southern California. We will be starting school this August and will marry in 2015.

Congrats on everything Kara + Pete! And best wishes from all of us at GWS!