Rob + David went on their first road trip together to Colorado this past summer. It was there that David started thinking about a meaningful way to propose to the love of his life. As this was a momentous trip to them, David thought why not take Rob to the Maroon Bells in Colorado later that fall for their first photoshoot together?

David tells us: I also knew I didn’t just want to randomly surprise him with a ring. Rob likes to express himself through letters, so I thought I’d write him one too, and ask the question in the end. Rob and I had never hired a photographer to take our picture, so I thought I’d tell him we would finally be hiring one on this trip instead of taking our own picture on a self-timer. I got in contact with Sheena Shahangian Photography, and together we planned the details of the session over several weeks.

Let’s see how they pulled off the surprise and all the heart-warming images!! 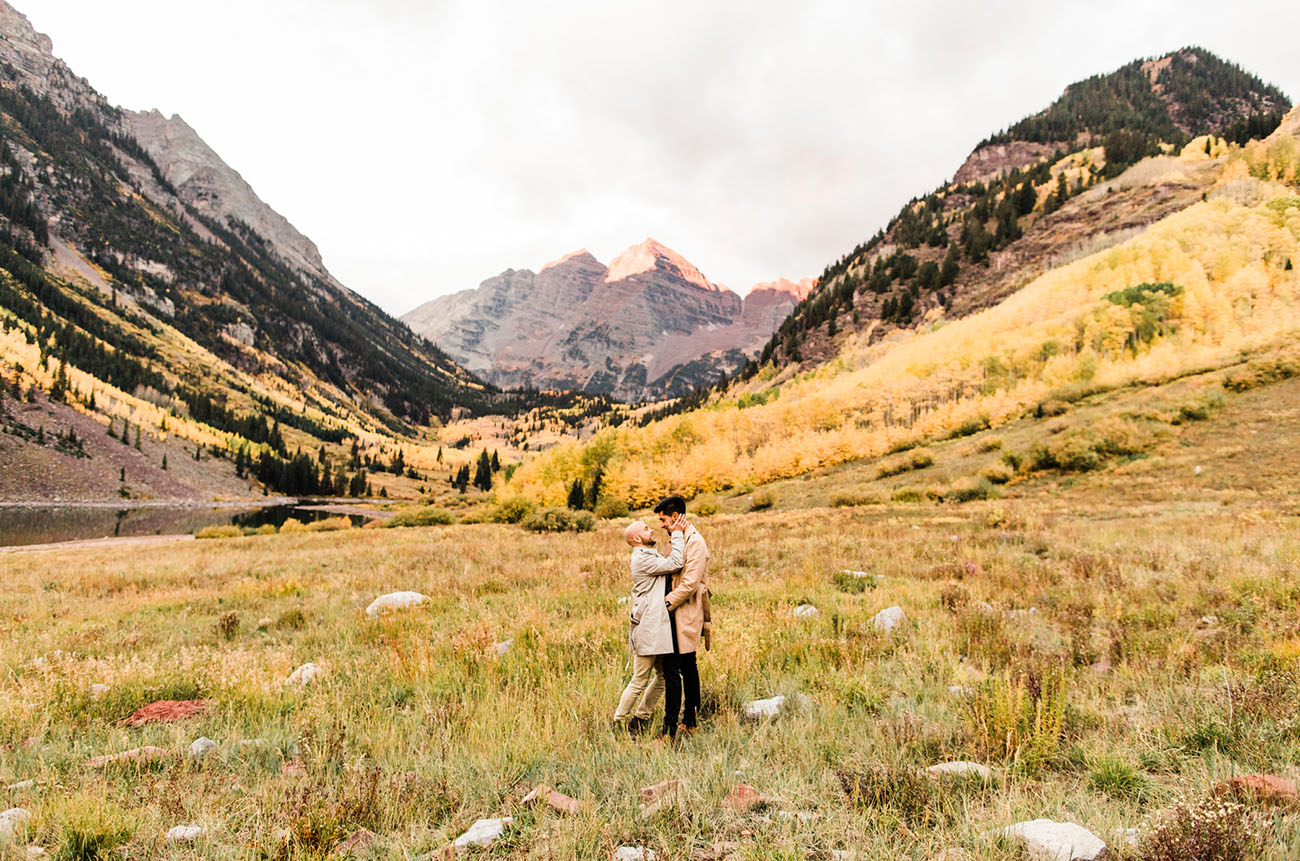 We don’t get a lot of the autumnal hues at our home office in Southern California…but we do know that this is straight up DREAMY. 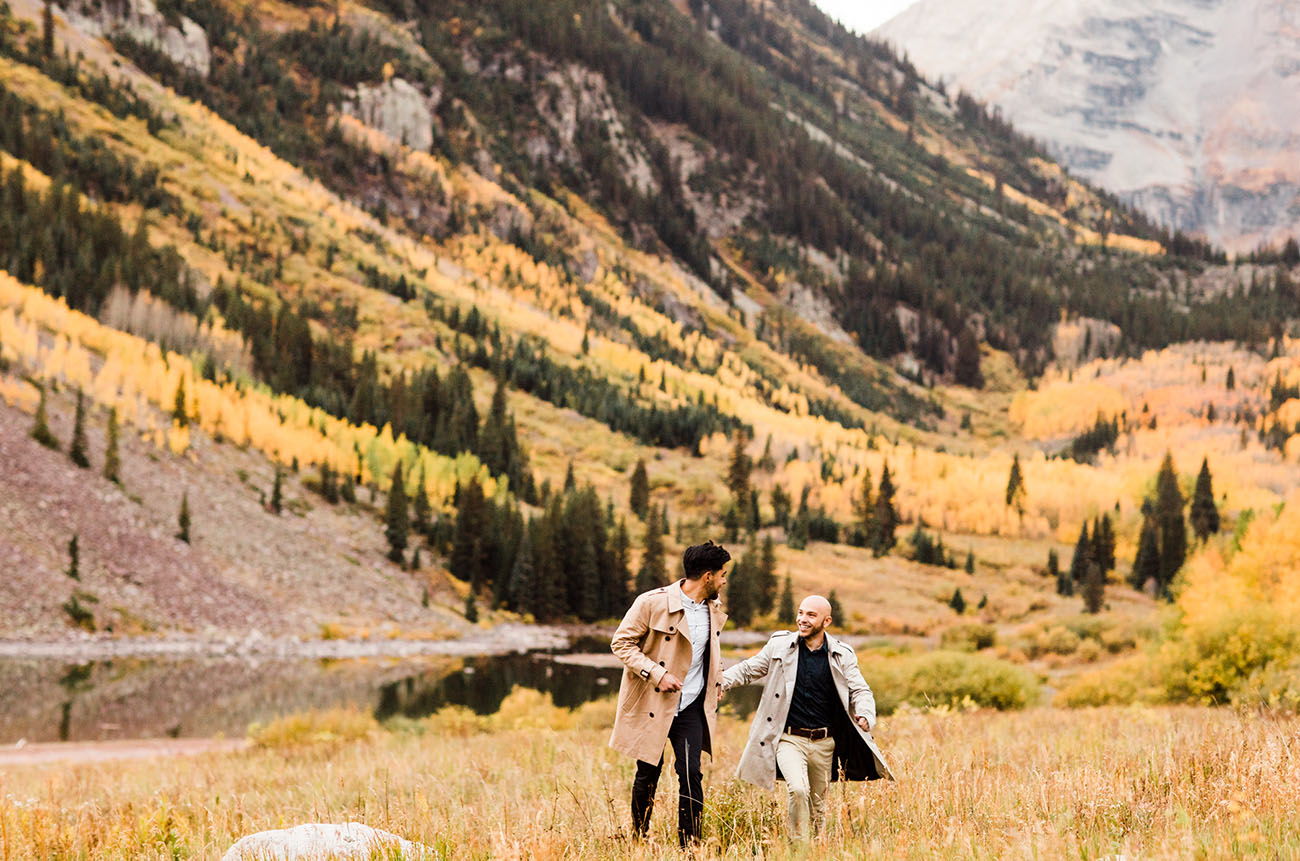 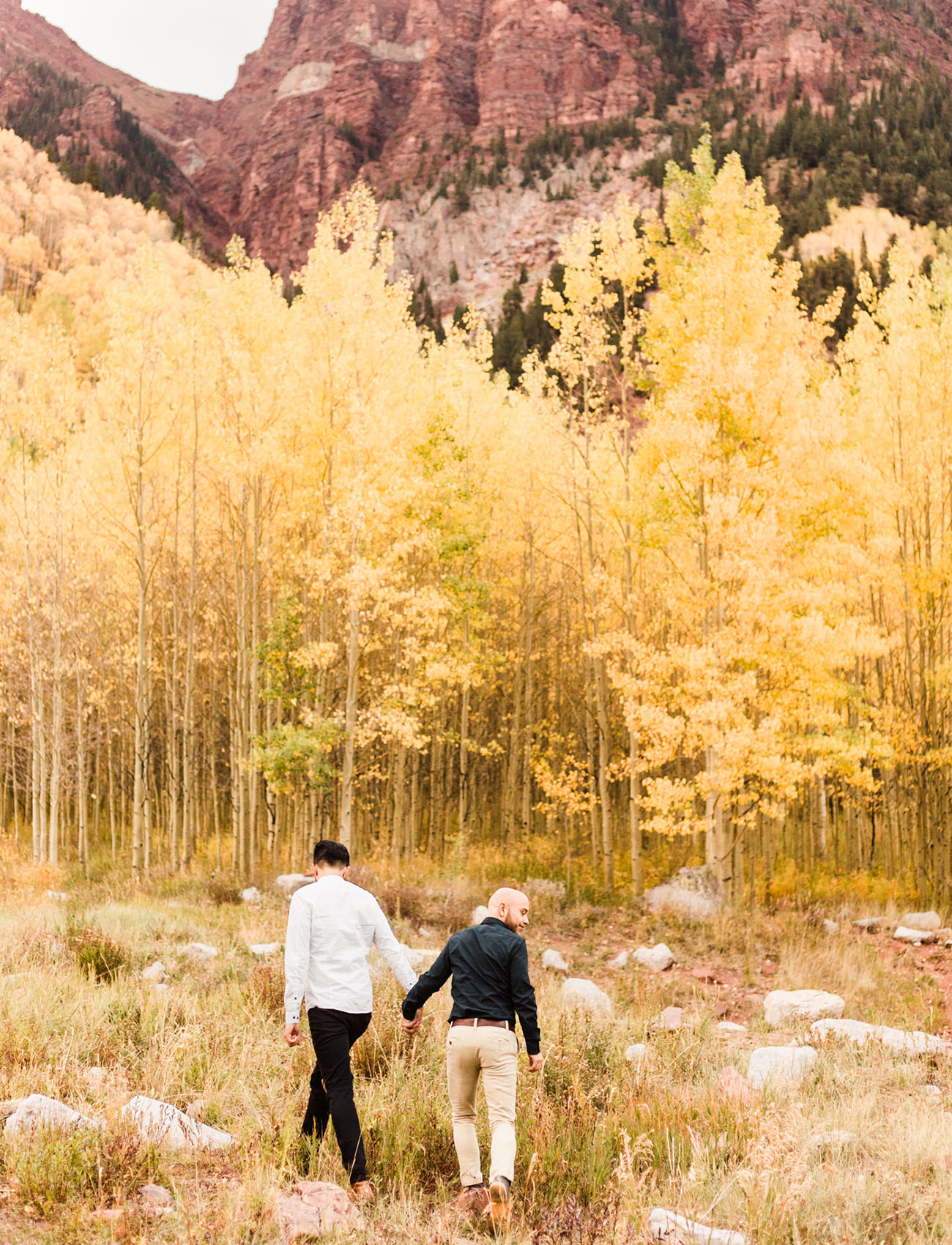 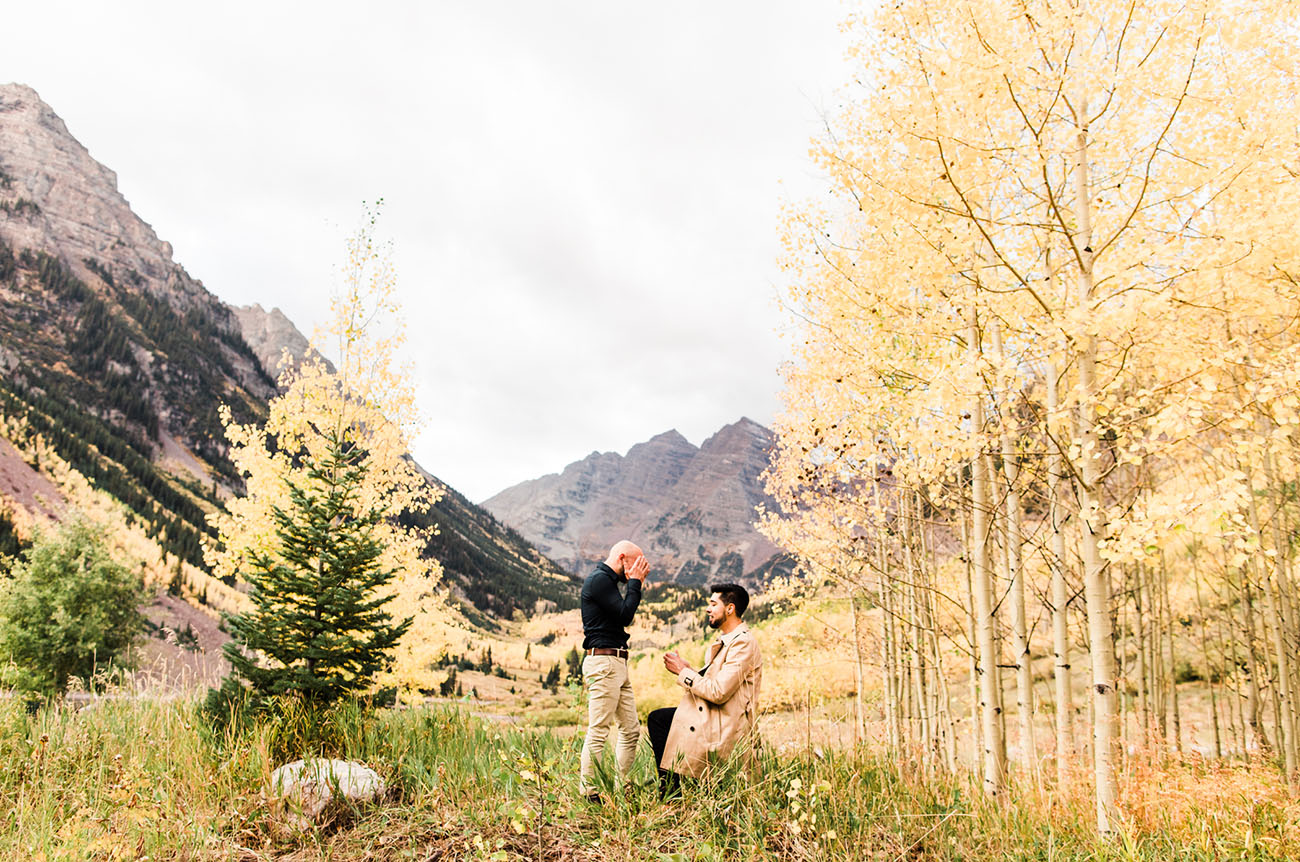 David shares: When the day finally came, I was anxious for sunrise, which is when I wound finally read this letter to Rob and ask him to marry me. We did several pictures in the dark before sunrise, then sat around in the grass trying to keep each other warm. When sunrise finally came, I was more nervous than ever. After reading just a few words, we were both in tears. The letter referenced a letter he had written to me months before, and this was my reply. At the end of this letter I got on one knee, and the rest was history. 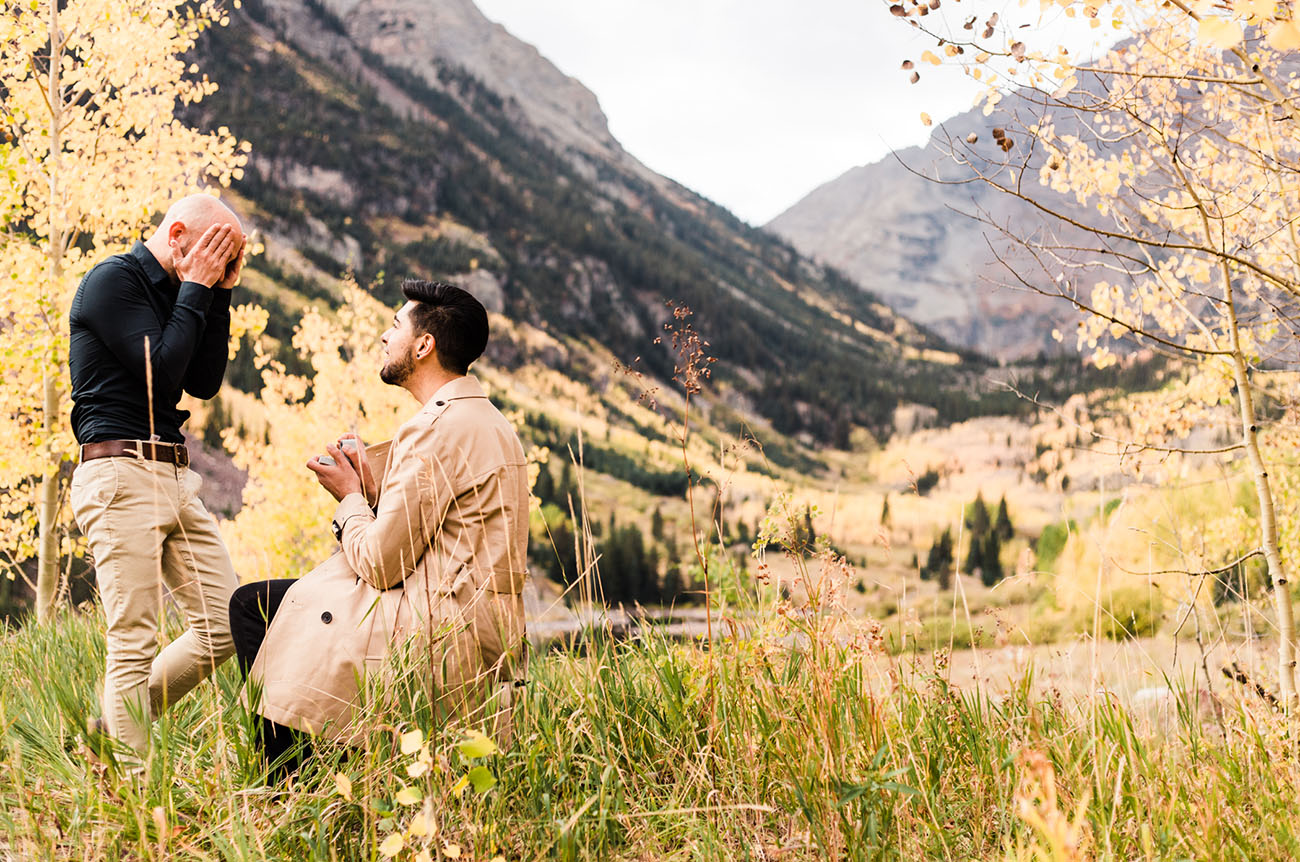 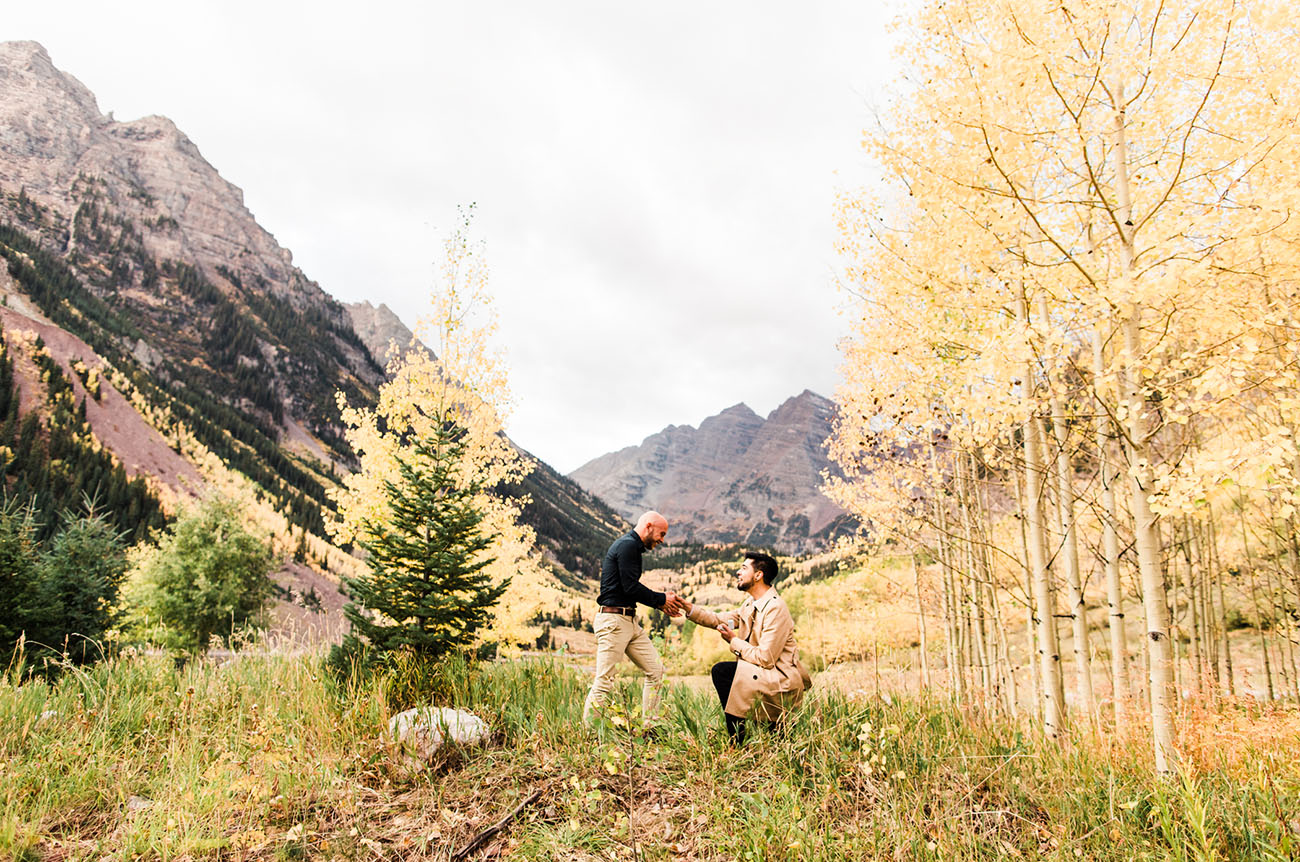 ALL THE FEELS. Yes!! 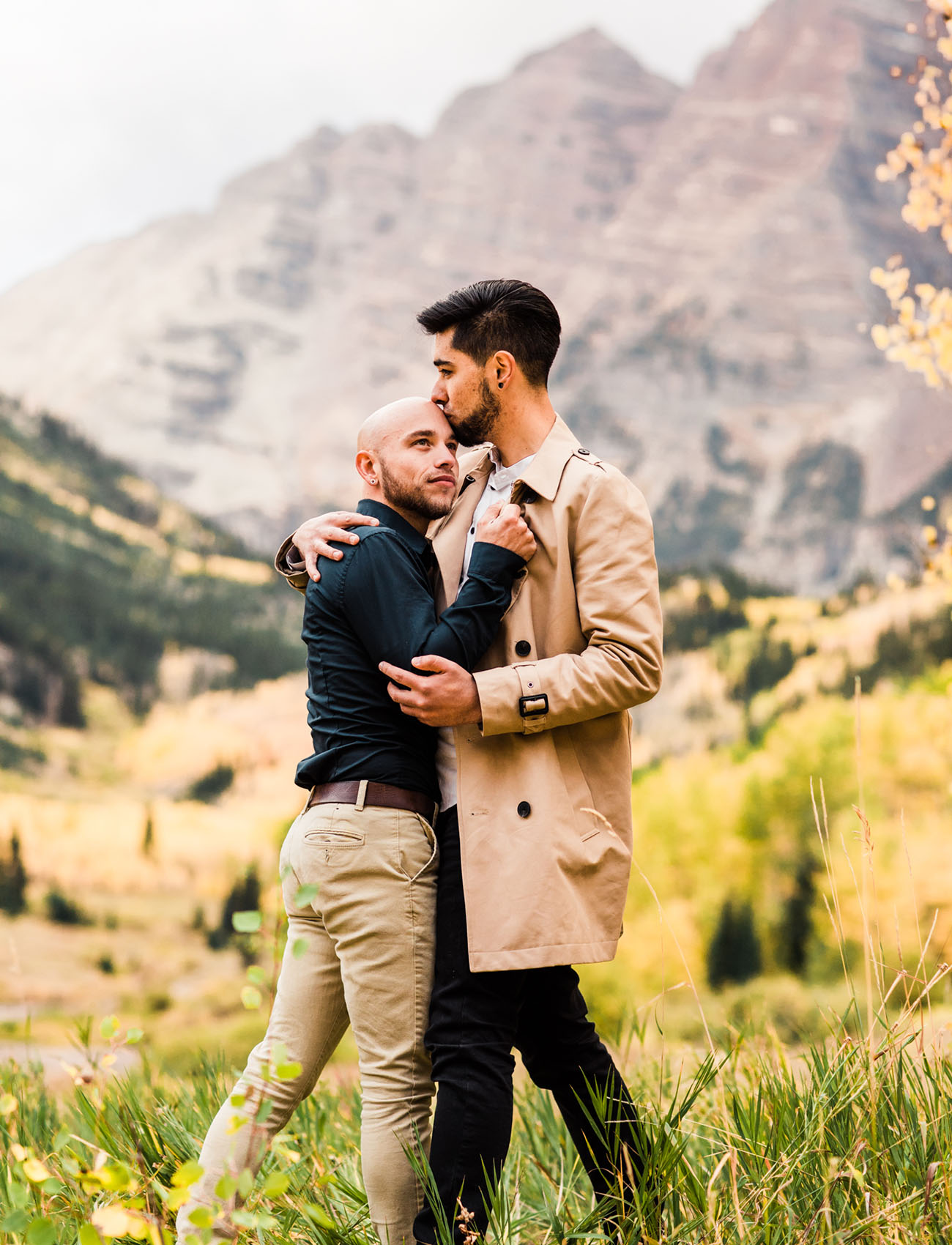 Now, we get Rob’s perspective…and how he was surprised! On September 24th, we started the day waking up at 3:30 a.m. I was really excited as we had never hired a photographer to take our pictures before. Sheena met David and I outside our hotel at 4:00 am, and we followed them to the Maroon Bells, one of my favorite places in Colorado. It was still pretty dark out, but she told us that she wanted to get there early to capture the amazing sunrise, and so we could witness the beautiful alpenglow. These two have serious style, don’t you think? Here are a few pieces to create similar looks: 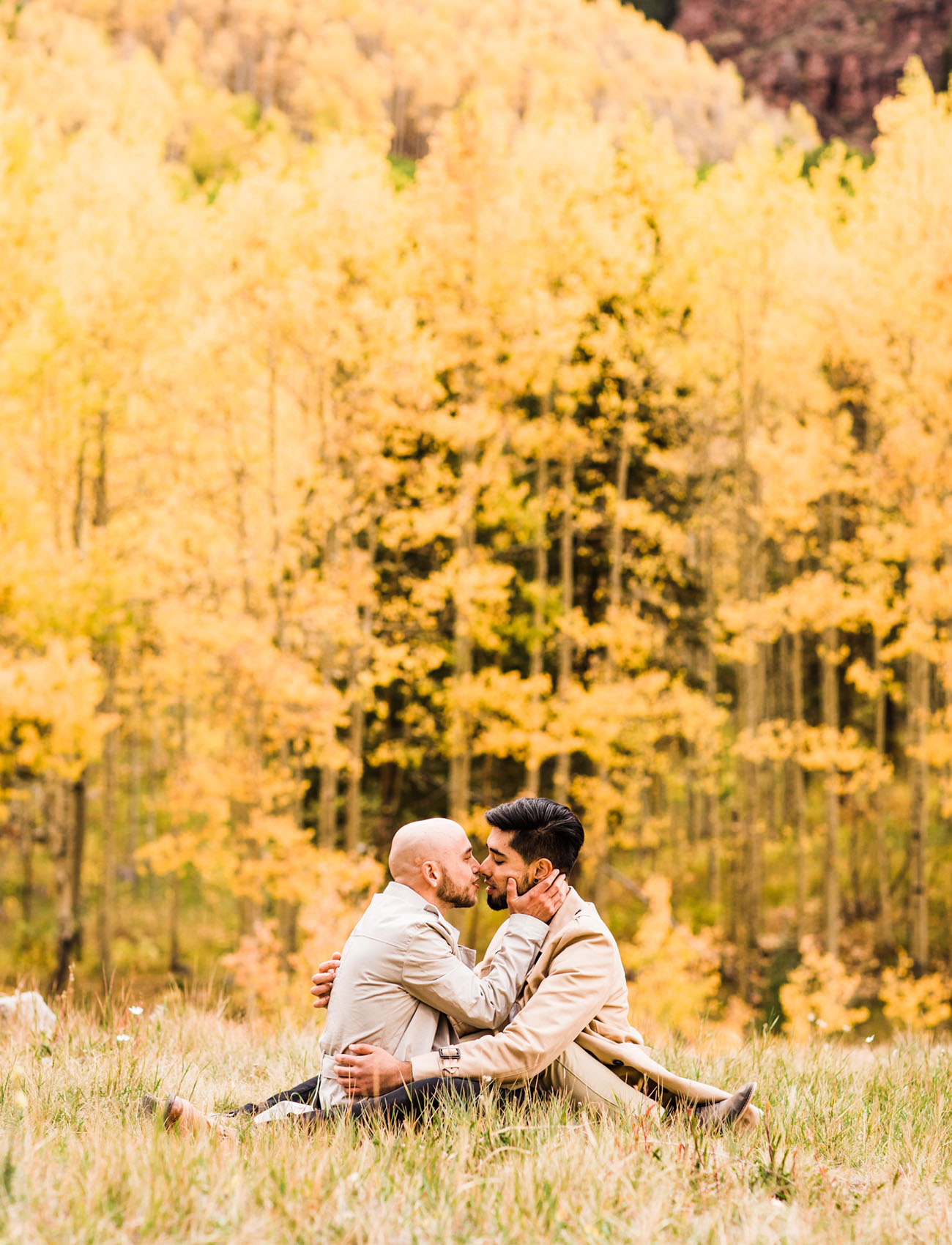 We went to various spots in the open field and throughout the dense forest of aspen trees taking pictures. Later, Sheena looked at the both of use with a smirk and said, “I think I have an idea.” She told us that I was going to go “airborne,” and David was going to throw me in the air.

My first thought, no way, I’m staying firmly on the ground, I’m already at a high enough altitude. They carry on with their plan, talking amongst themselves about the idea, telling me to go over somewhere else as they discuss this master plan of theirs. I could tell this was going to be a surprise, and was very curious on how they thought they were going to pull it off because I was telling myself “do not cave in, I’m staying on the ground.” 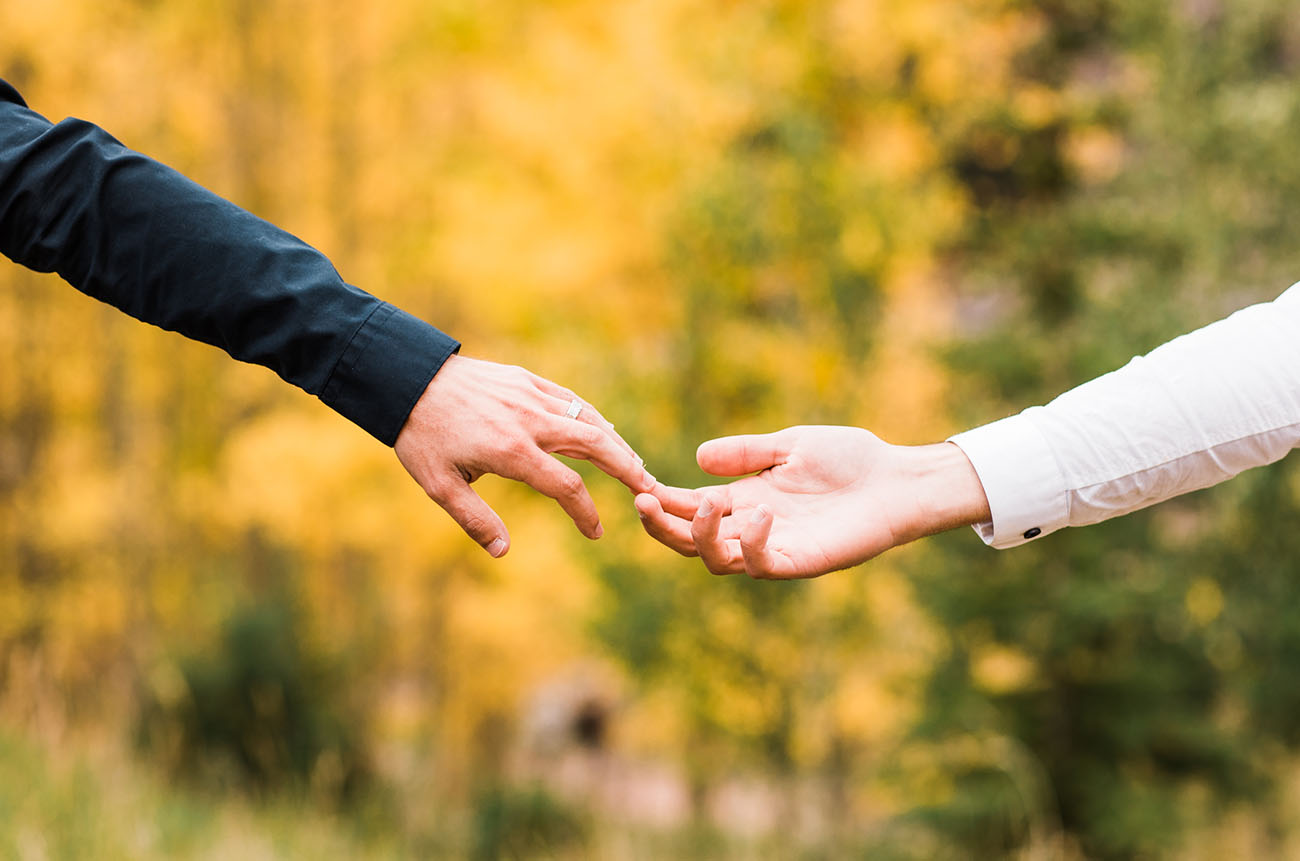 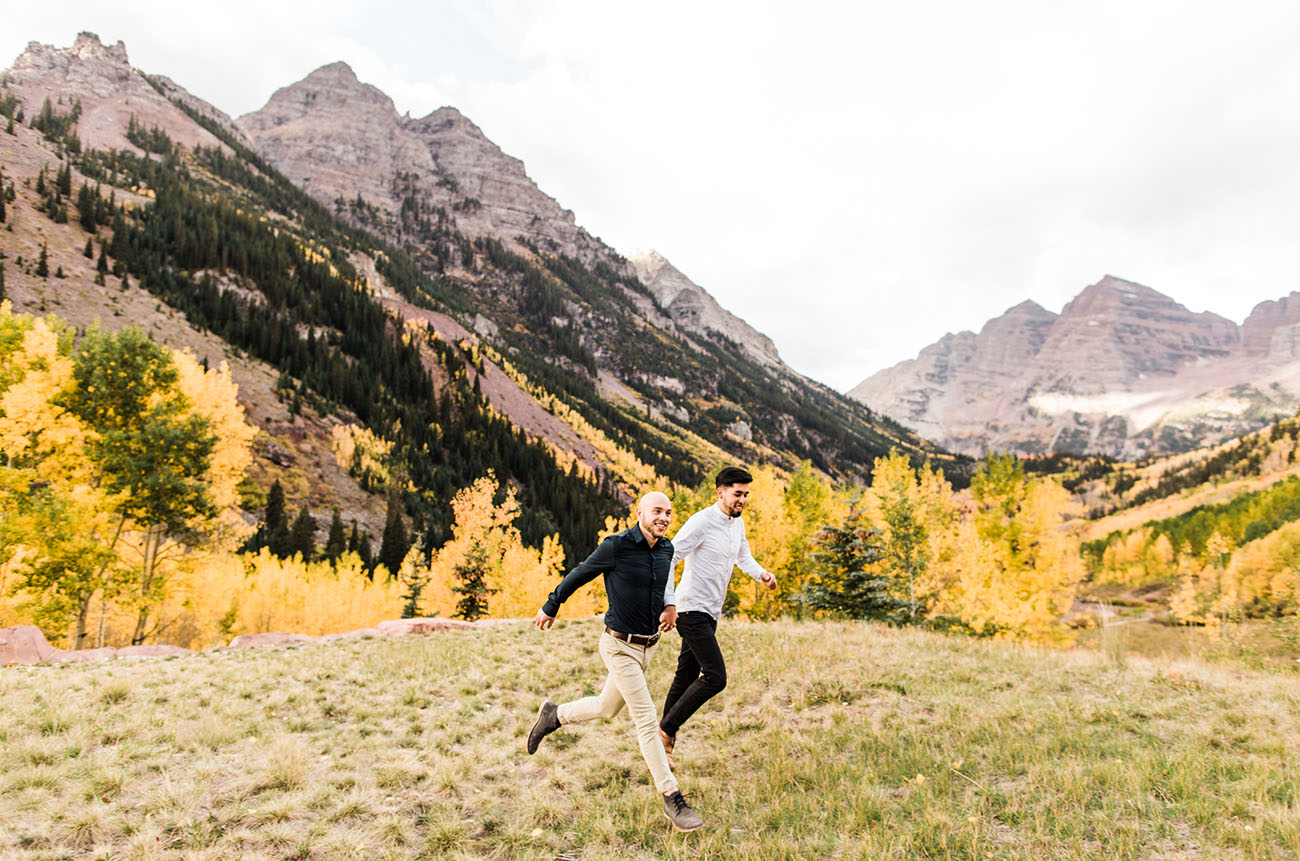 They finish up with their private discussion and we continue with the photo session, feeling a bit nervous. We took some pictures on the top of a small hill. Sheena then looked at me and said “Rob, are you ready?!” I went from feeling nervous to feeling scared. Still not knowing what they had planned. I could tell something was about to happen, I noticed Sheena looking at David. David grabs my hand and looks at me, his face is more serious. He tells me he has a letter he would like to read to me.

Writing letters is one of my ways I tell him how much I love and care for him. He isn’t much of a writer, so I knew this letter was going to be very special and meaningful to me. The tears were already rolling, and he hadn’t even started reading yet. As he read the letter, I was almost speechless. The letter was referencing another letter I had written to him months ago, and this was his reply. He gets to the end of the letter that reads, “I want to be your lifetime lover, companion, and best friend. I want to offer you my commitment, my honesty, my trust and my love. Rob, will you jump into this river with me and marry me?” 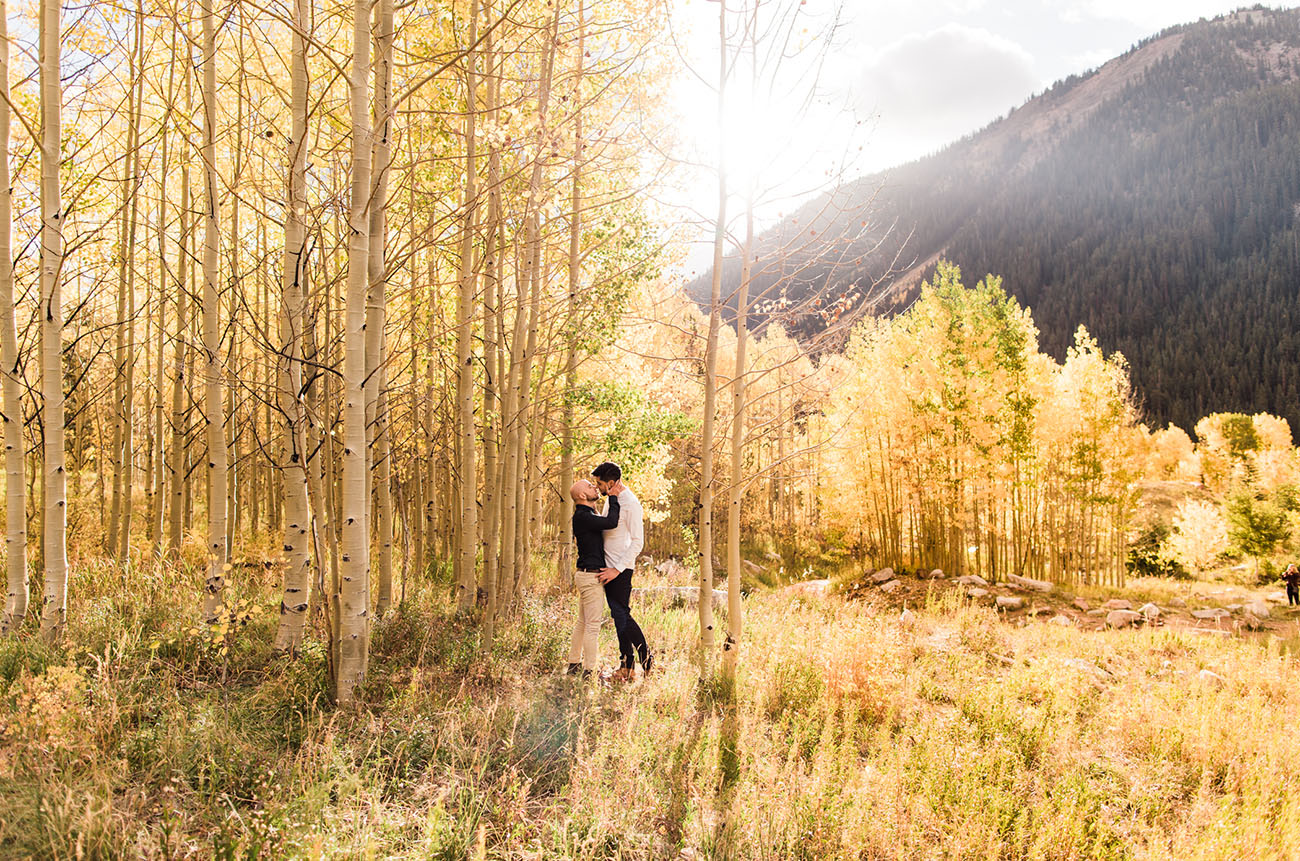 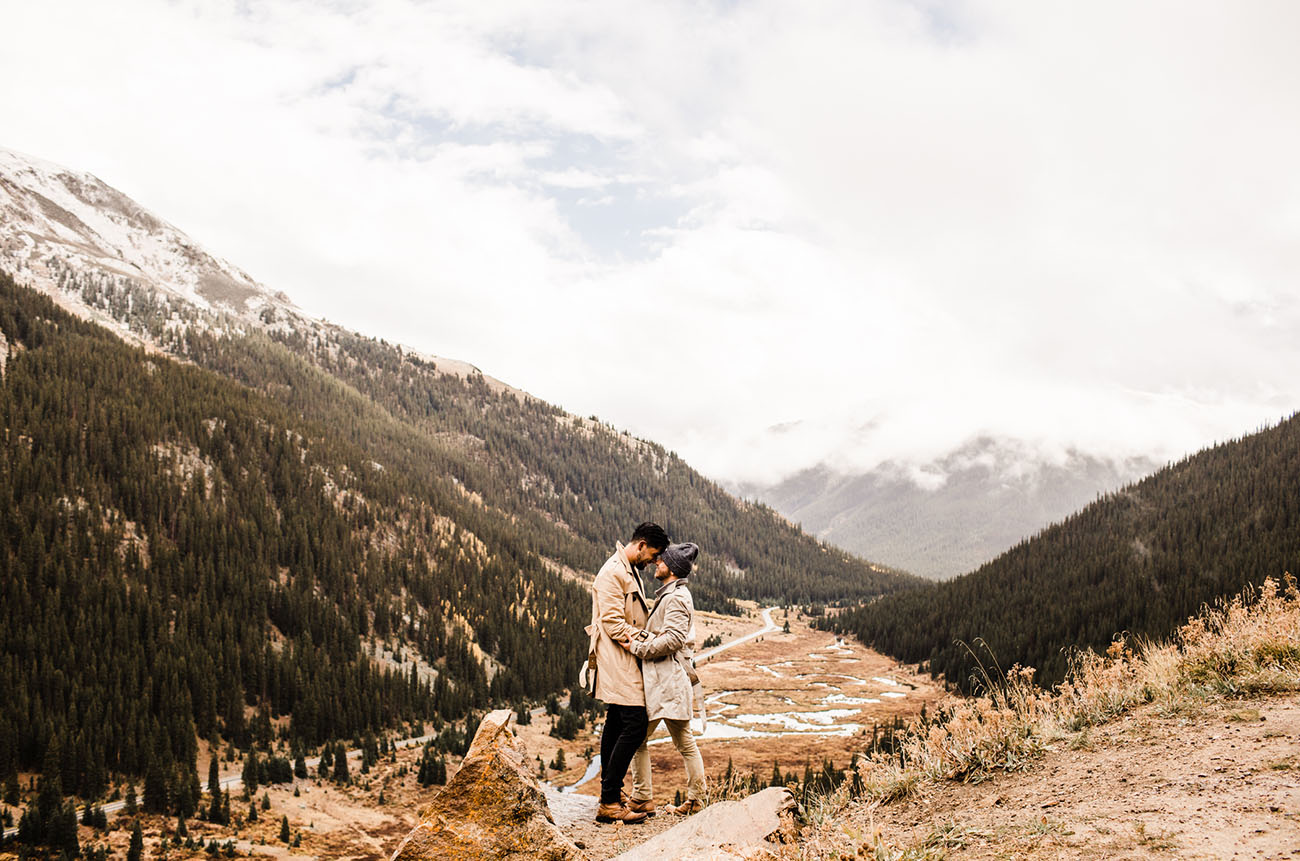 He asked me the same question that I had been wanting to ask him for months. I was so happy that he saw the same potential to be my future husband as I saw in him. After a long hug, and wiping our tears and getting ourselves put back together, we continued our photo session. This time with a shiny new ring.

Caught in the Snow! 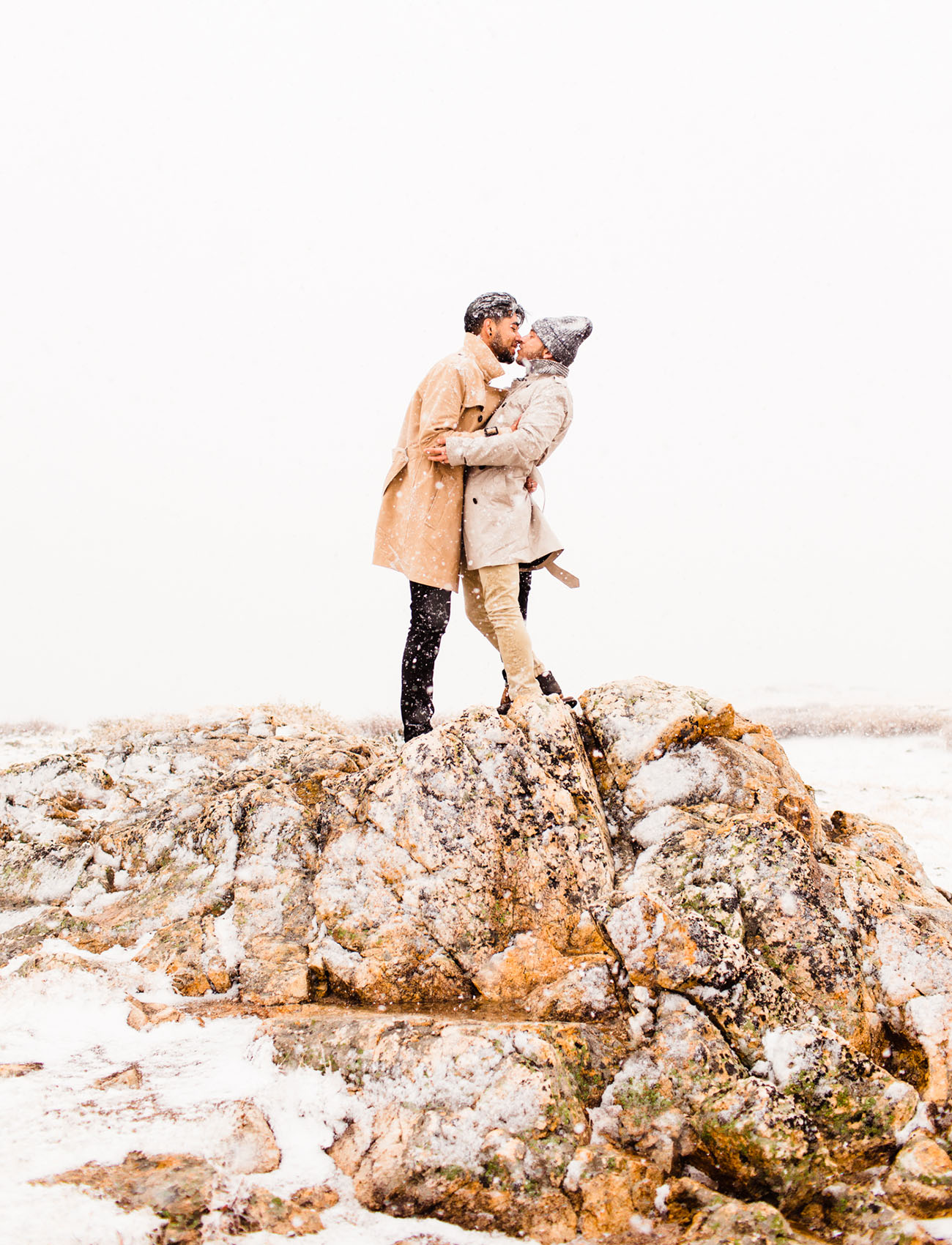 How magical is this?!

Their photographer, Sheena, tells us: We spent the rest of the afternoon wandering around all of the beauty Aspen has to offer, including making our way up over 12,000 feet in elevation. In just a matter of a few hours, and a drive up some windy mountain roads, we went from fall colors to an icy, intense mountain snowfall.

That’s the beautiful part of Colorado’s mountains: the ability to experience multiple seasons in a single day. It truly was a magical day; Colorado showing off for a beautiful couple celebrating the beginning of their new life together. 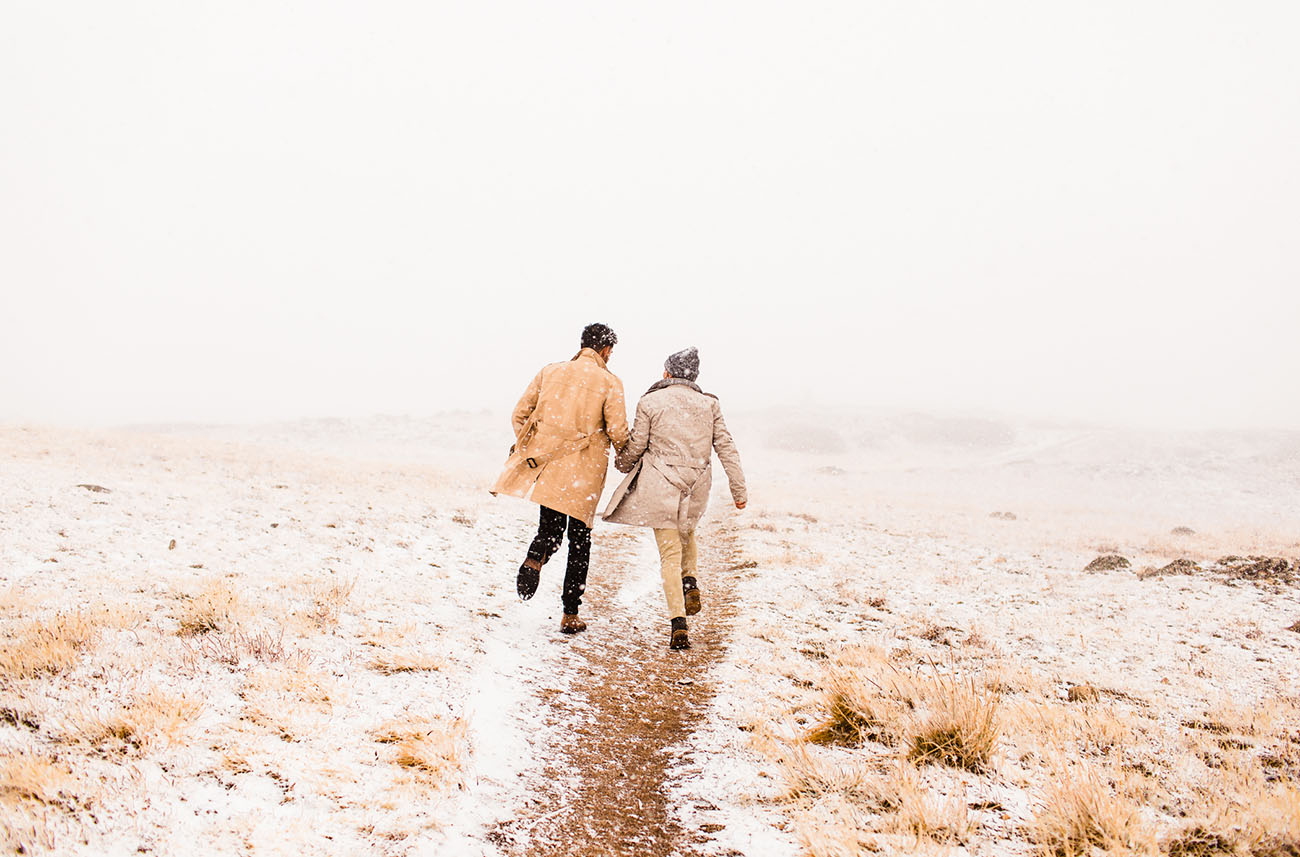 My eyes may possibly be welling up with tears… 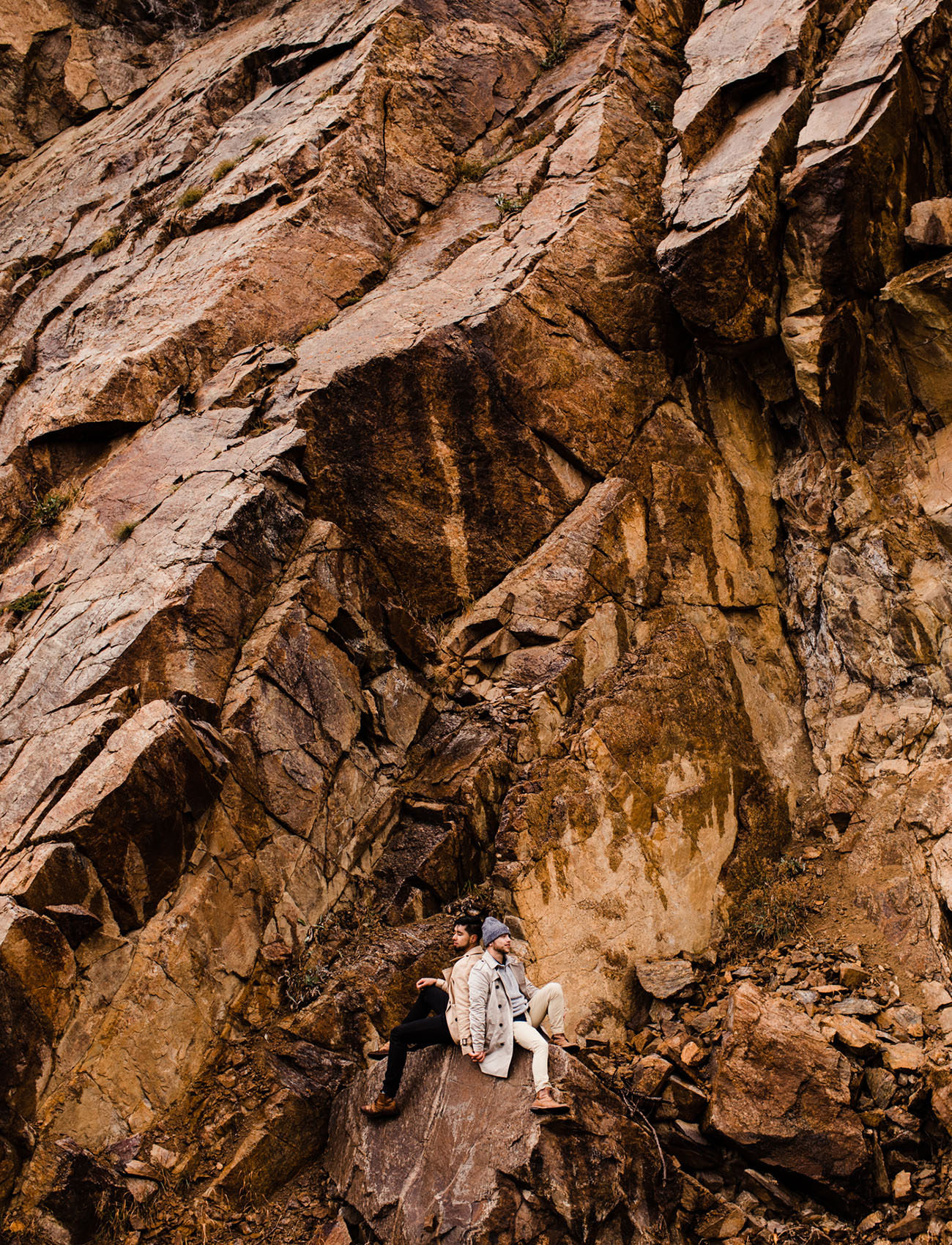 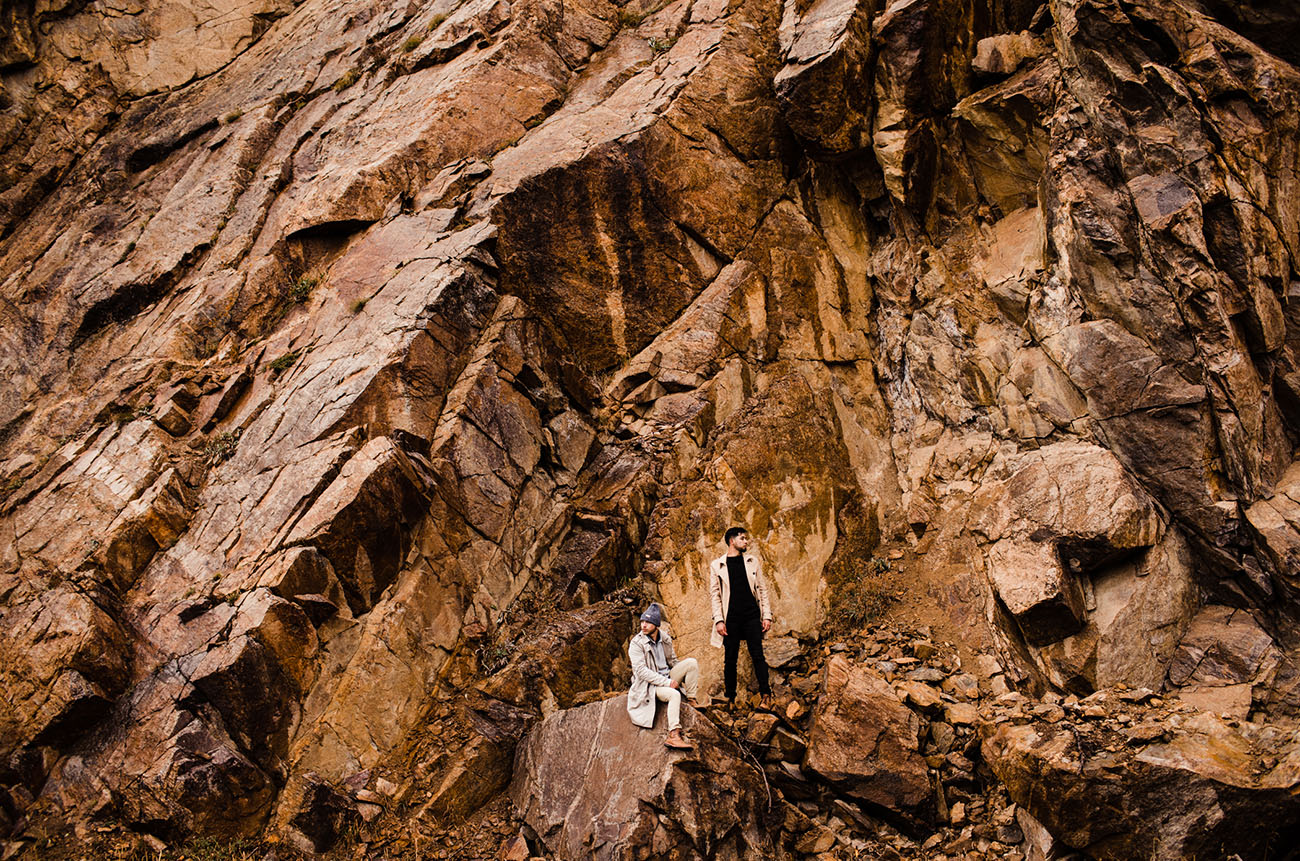