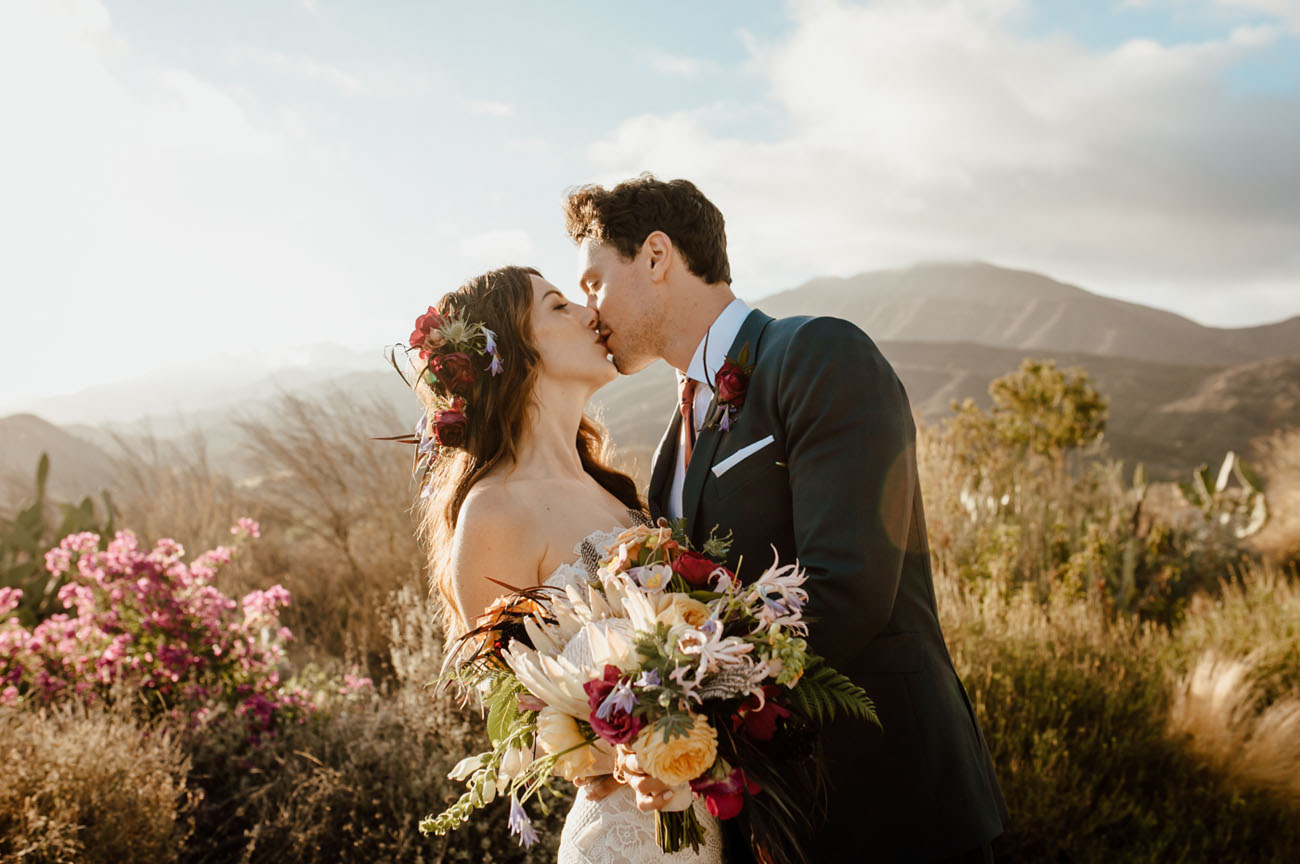 For Kristel + Michael, if love were a physical place, it would be Ojai, California. Being from LA, the two first vacationed in Ojai while they were dating and knew firsthand the magic the town possessed. They were inspired by its spirit: organic, reflective, accepting, bohemian, and graceful. So for them, that had to be the place, and designer Wild Heart Events made it all come together.

K+M tell us We were inspired by nature, and the story of Ojai, as well as our own design aesthetics and personal styles. We wanted an eclectic, gypsy bohemian feel to reflect the bride, and modern mid-century elements to reflect the groom. The merging of the two styles worked out better than we could have imagined! We focused much of our planning on music, and really wanted to move the vibe along with music through the night. We featured an outdoor record lounge with vintage records for the guests upon arrival to set the laid back tone from the start – everything from Henry Mancini to Hall & Oates to Paul Simon. Then, we had a jazz trio (Django Foxtrot) play the ceremony and during cocktail hour. Our first dance to Chet Baker set off a romantic jazzy dinner soundtrack focusing on moon themed songs to go with our full moon, and eventually the night moved into a seriously dance throwback DJ set. Everyone was on the floor dancing, and the final song was “Dancing in the Moonlight” by King Harvest.

Let’s head to Ojai to see all the magic captured by The Gathering Season Photographers! 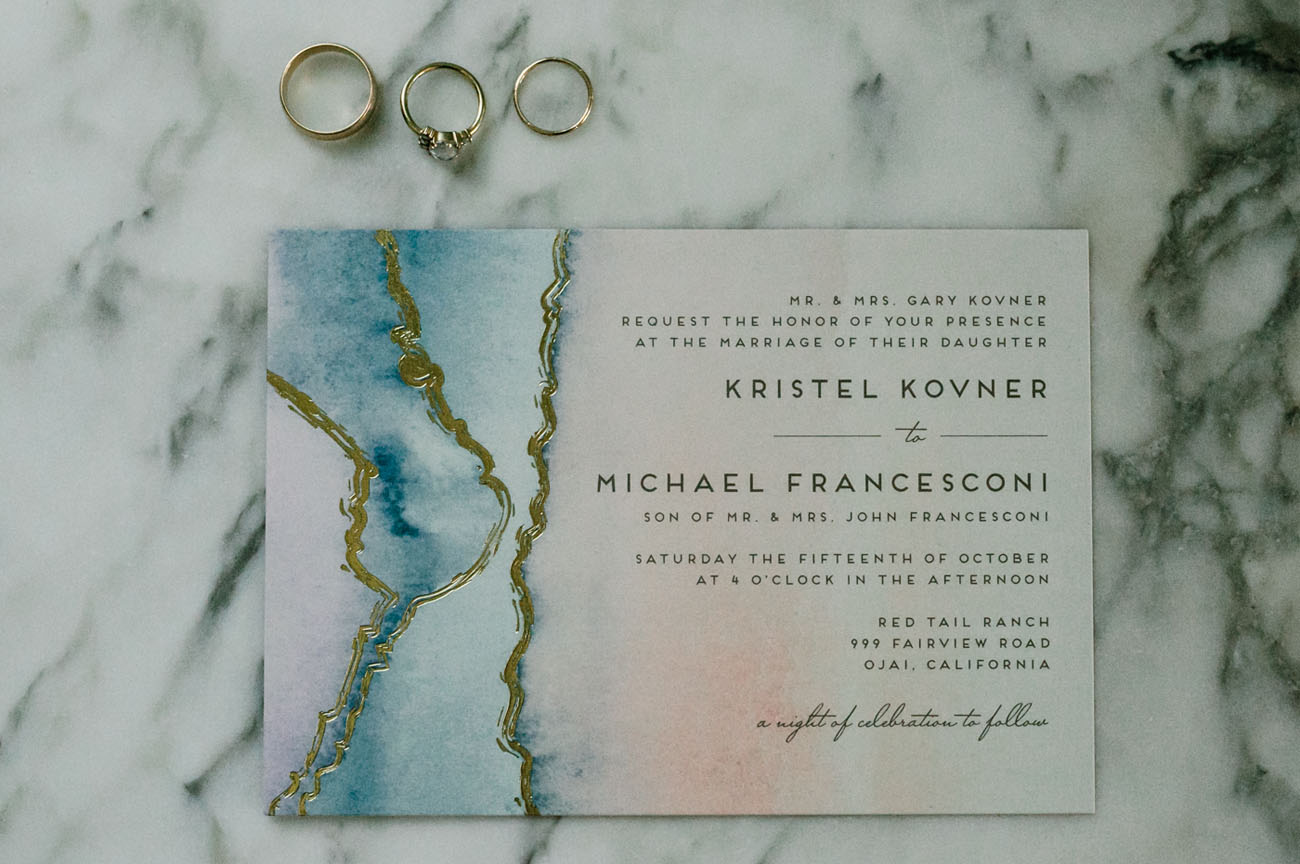 Whimsical watercolors with a touch of gold… How gorgeous is this invitation by Honey Paper? 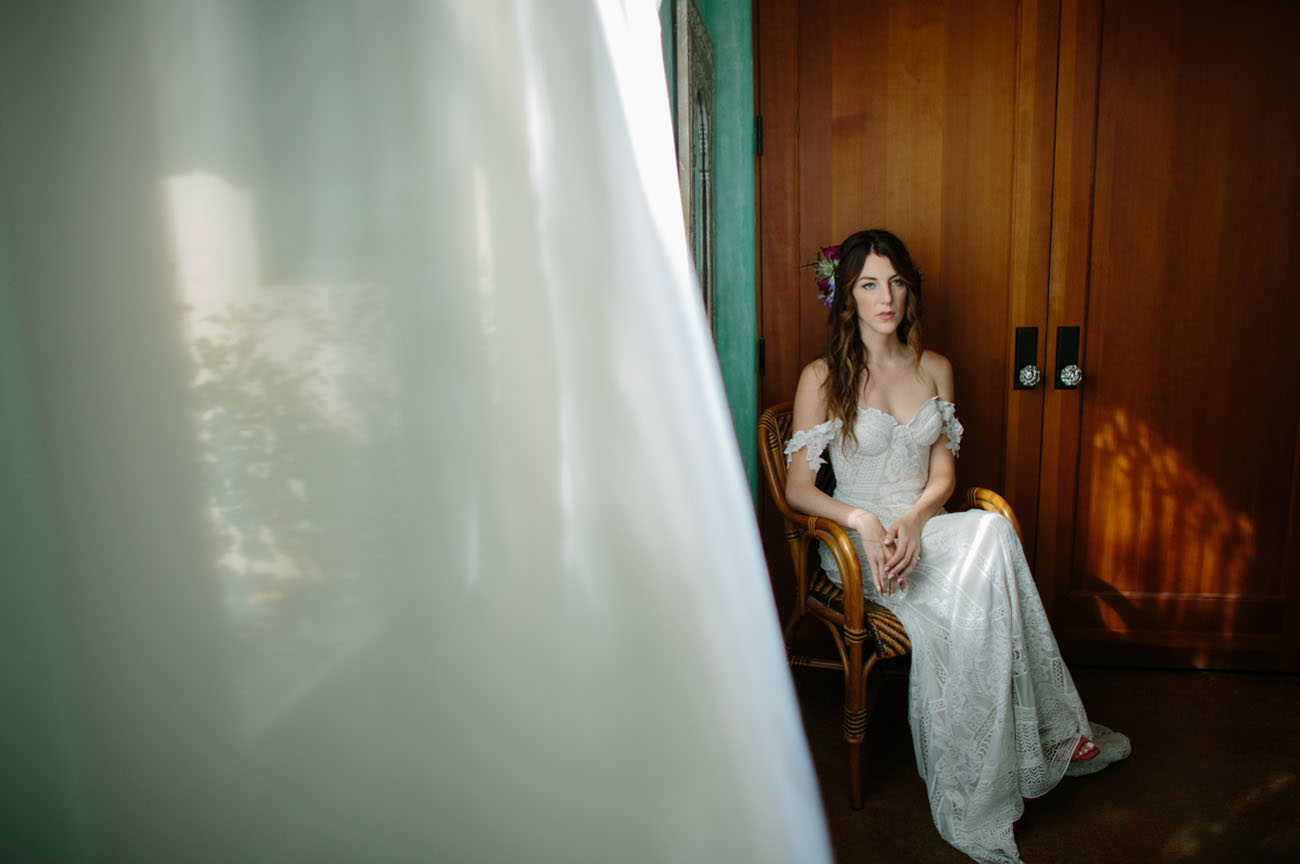 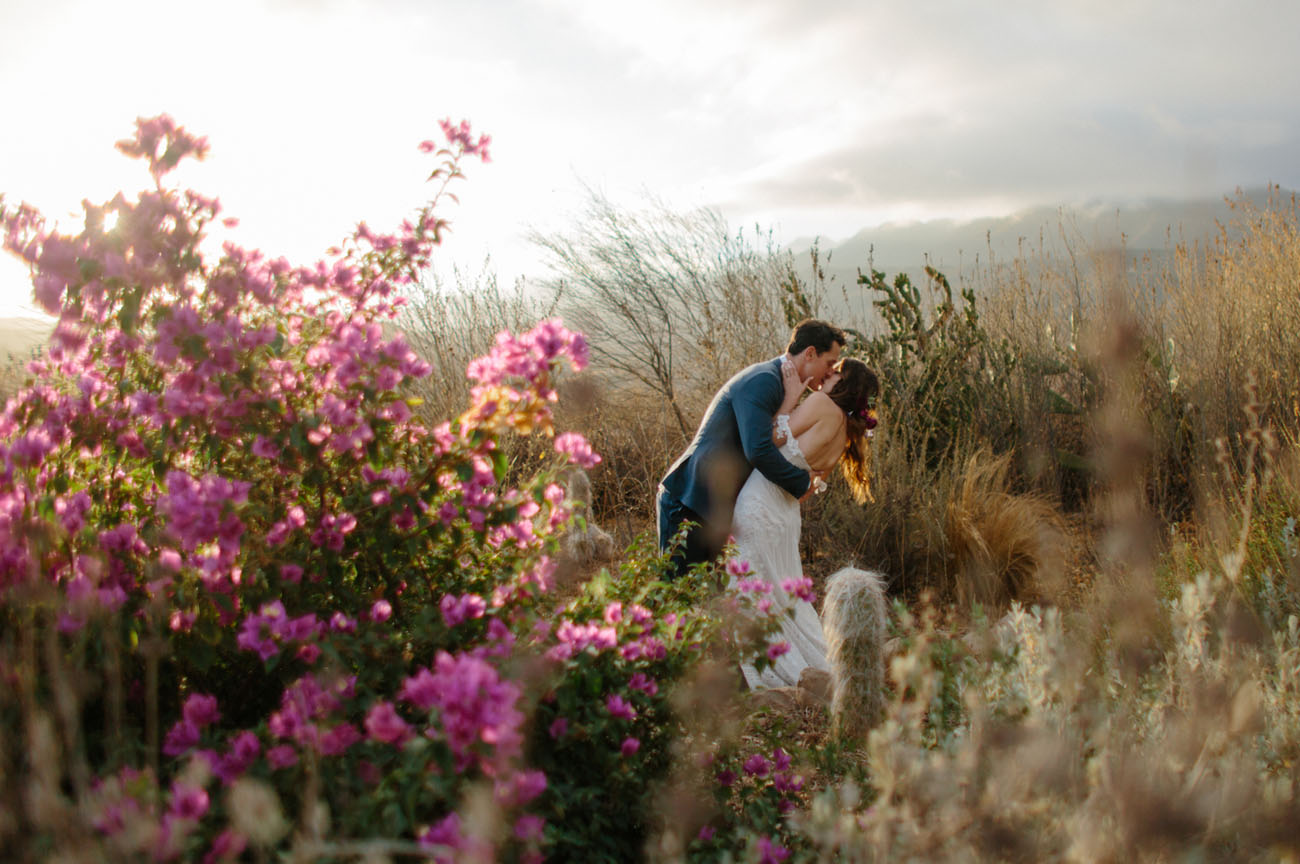 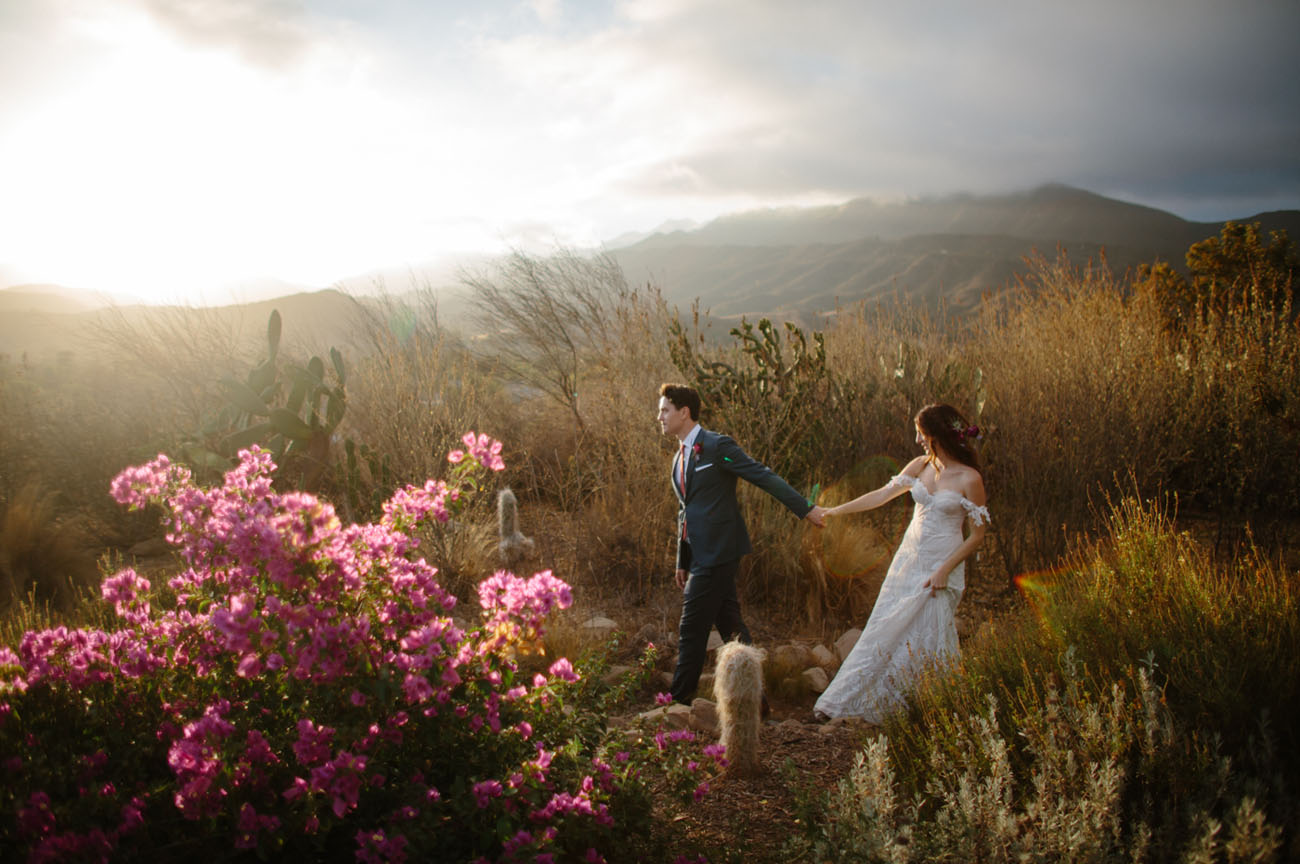 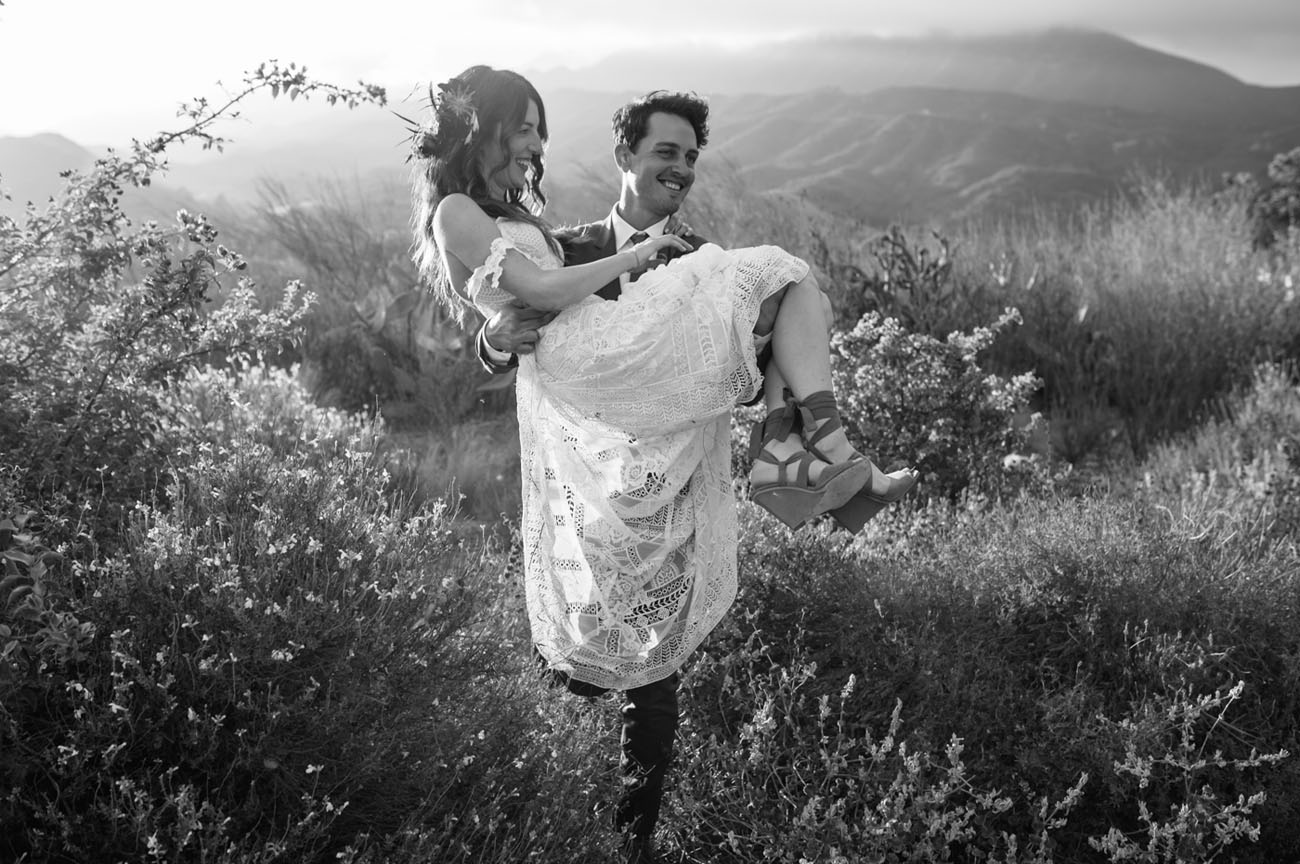 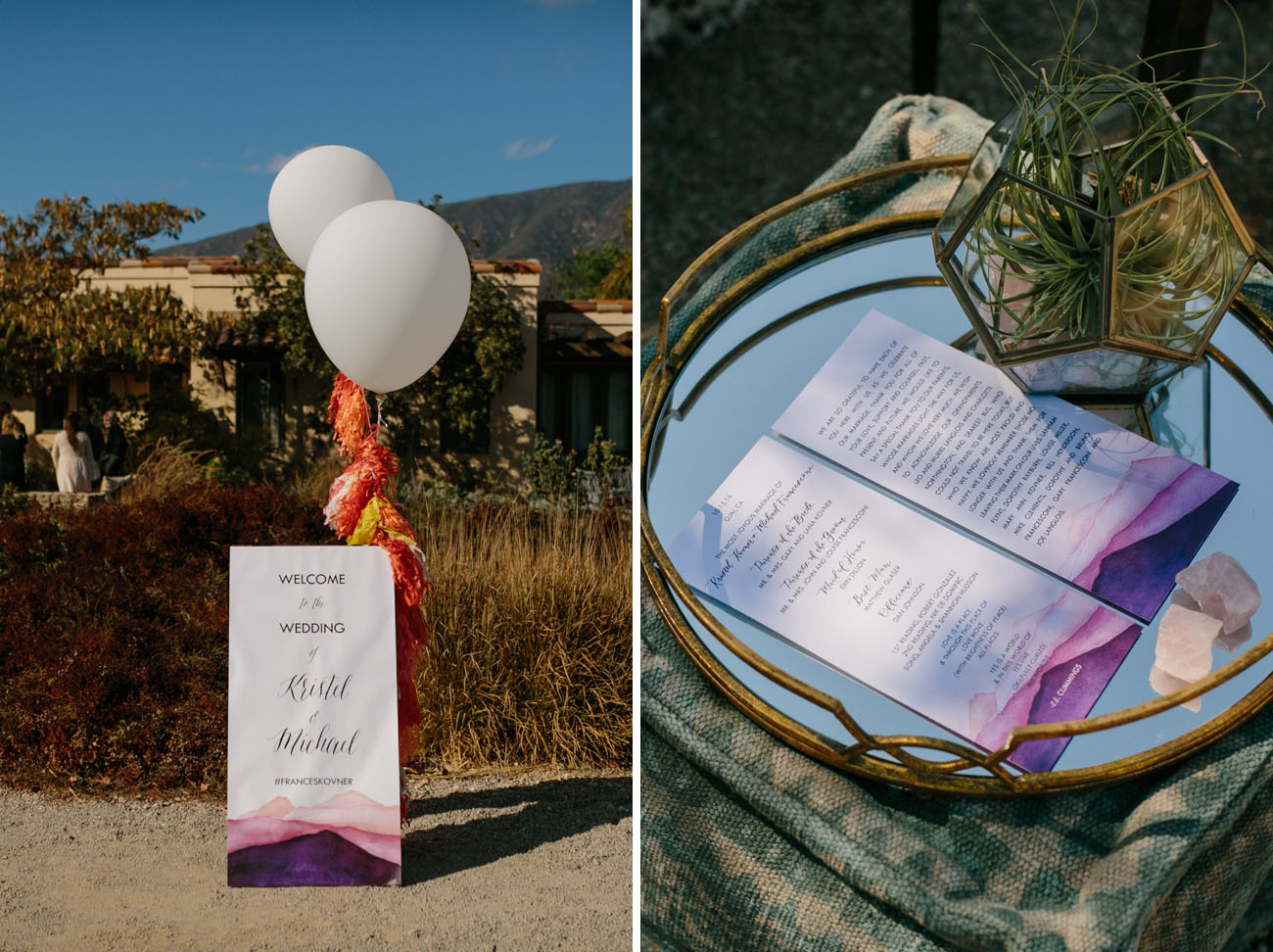 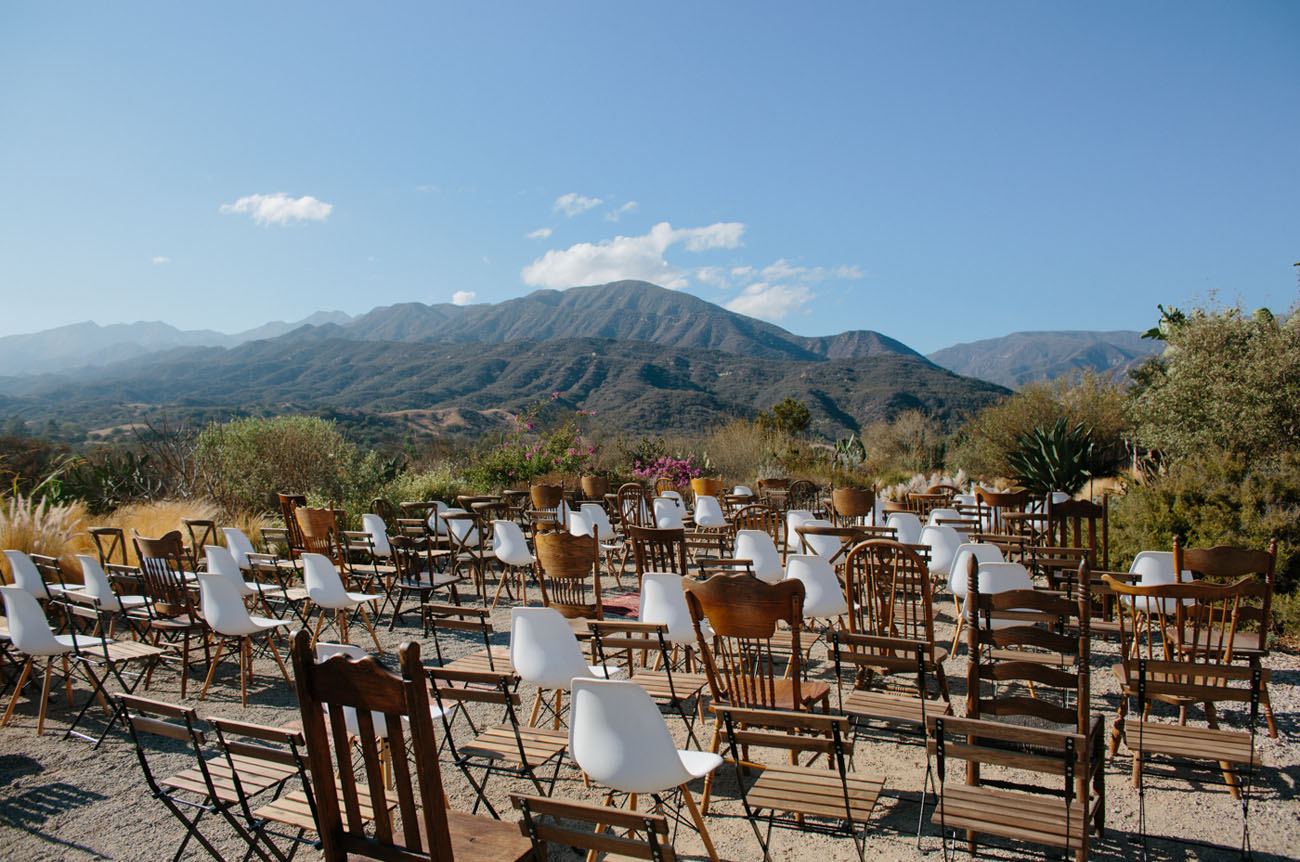 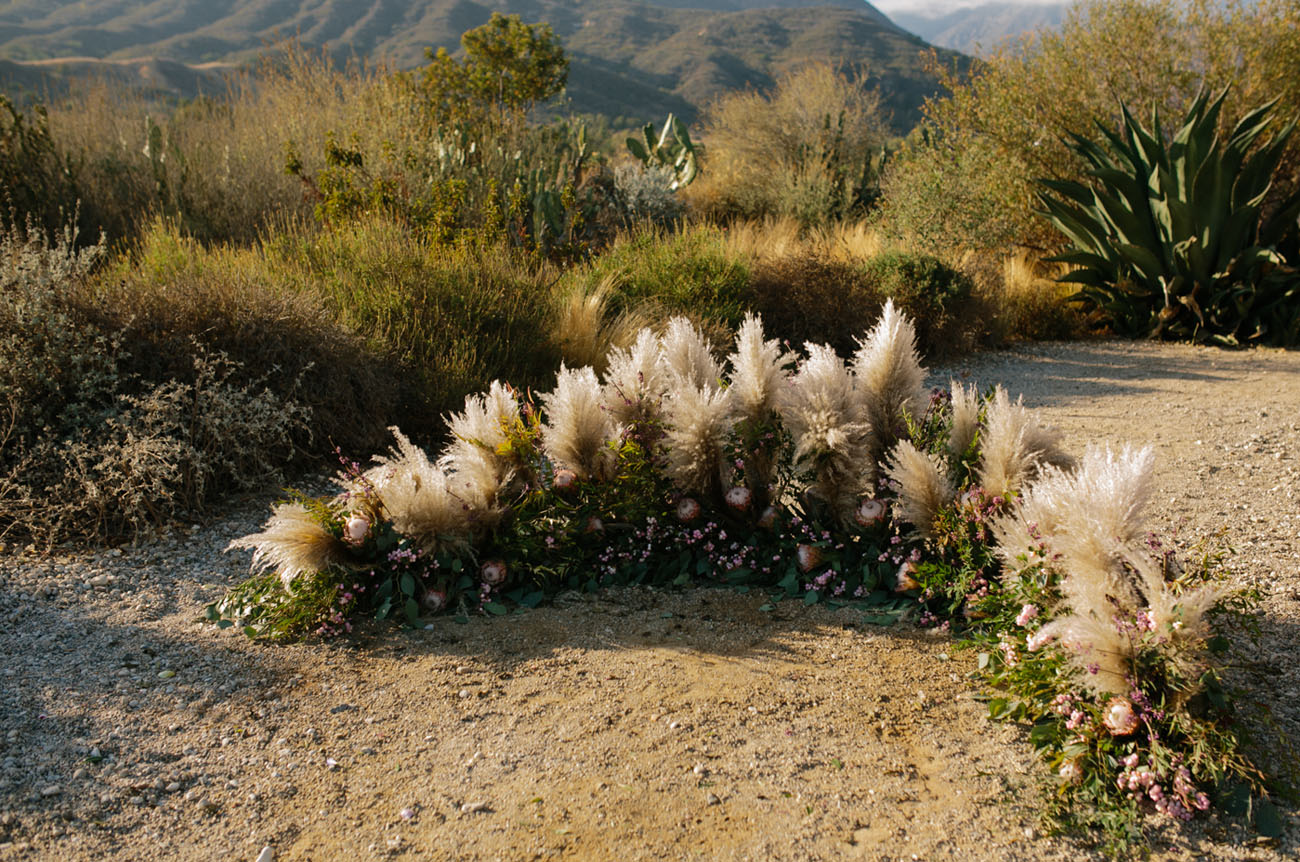 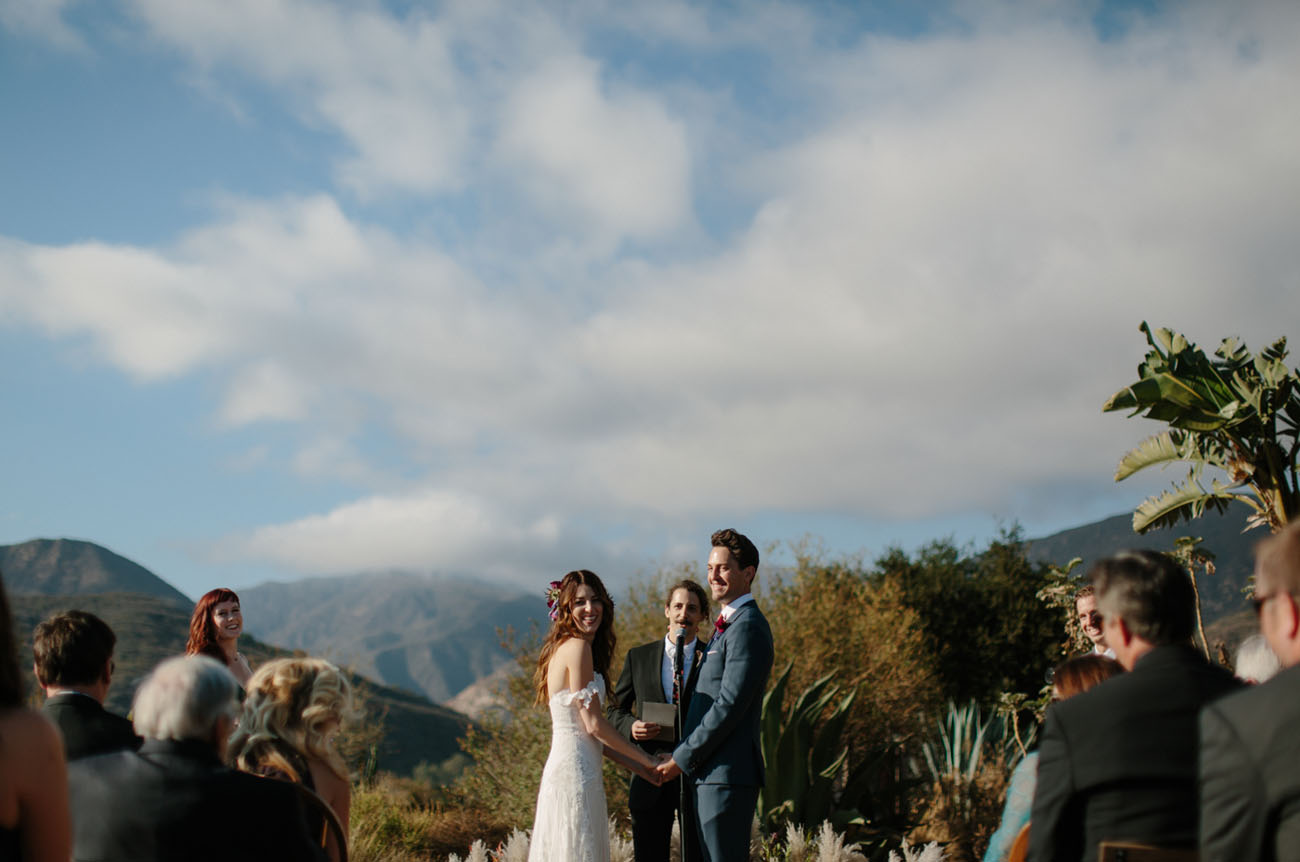 Kristel: Exchanging our vows we wrote for one another during the ceremony. There was such a peacefulness up there in front of our loved ones, looking out over the beautiful valley; and I’ll never forget the way he was looking at me, as though he was looking directly into my soul.

Michael: Three or four songs into dinner, at the most beautifully curated tables, as the family-style dinner was being passed across our head-table of family and friends, Que Sera, by Doris Day, came on and our two families burst into spontaneous song, and then so too did the entire wedding party. "Whatever will be, will be, the future's not ours to see, Que será, será." It's genuinely unforgettable. 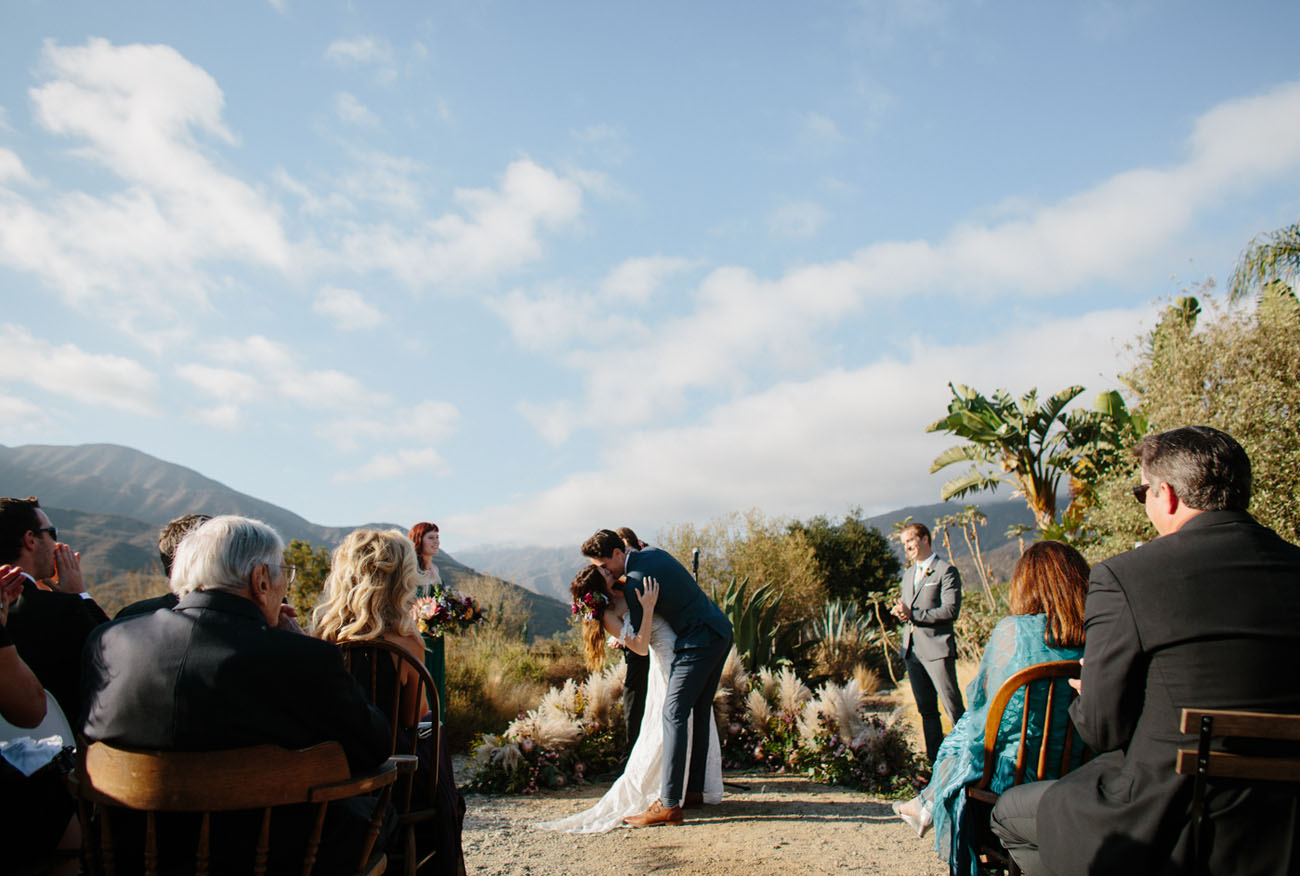 Recessional: Just Like Heaven by The Cure (Instrumental played by Django Foxtrot) The florals by Ella & Louie were inspired by eclectic jewel tones, with a focus on seasonal, local wildflowers, to look as though they were picked from the surrounding property. Feathers were used in the boutonnieres, bouquet, and in the bride’s hair. 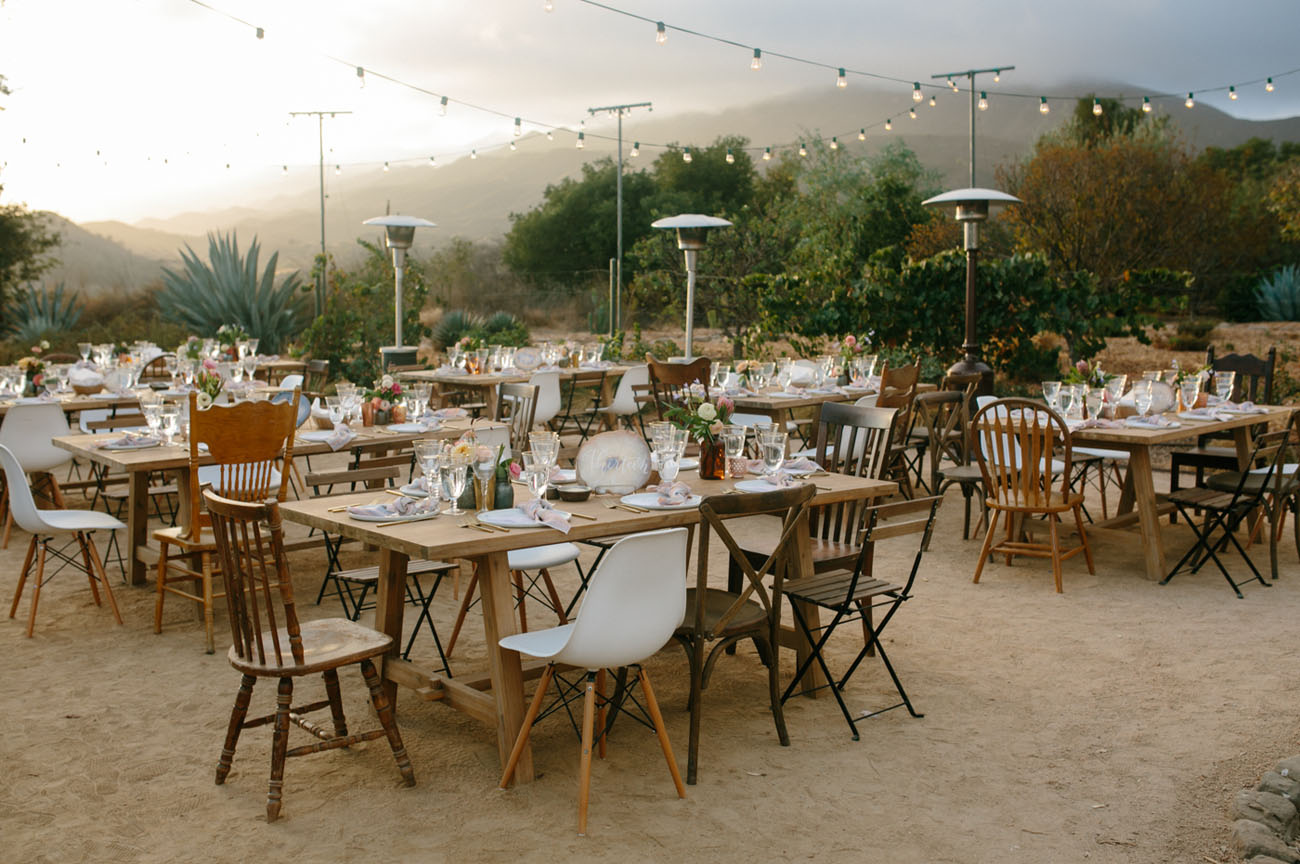 More than anything, we wanted our wedding to feel intimate, even though we would have 150 guests coming from all around the globe. Our goal was to make it feel as though we were having a low-key family-style dinner party, with our closest friends. 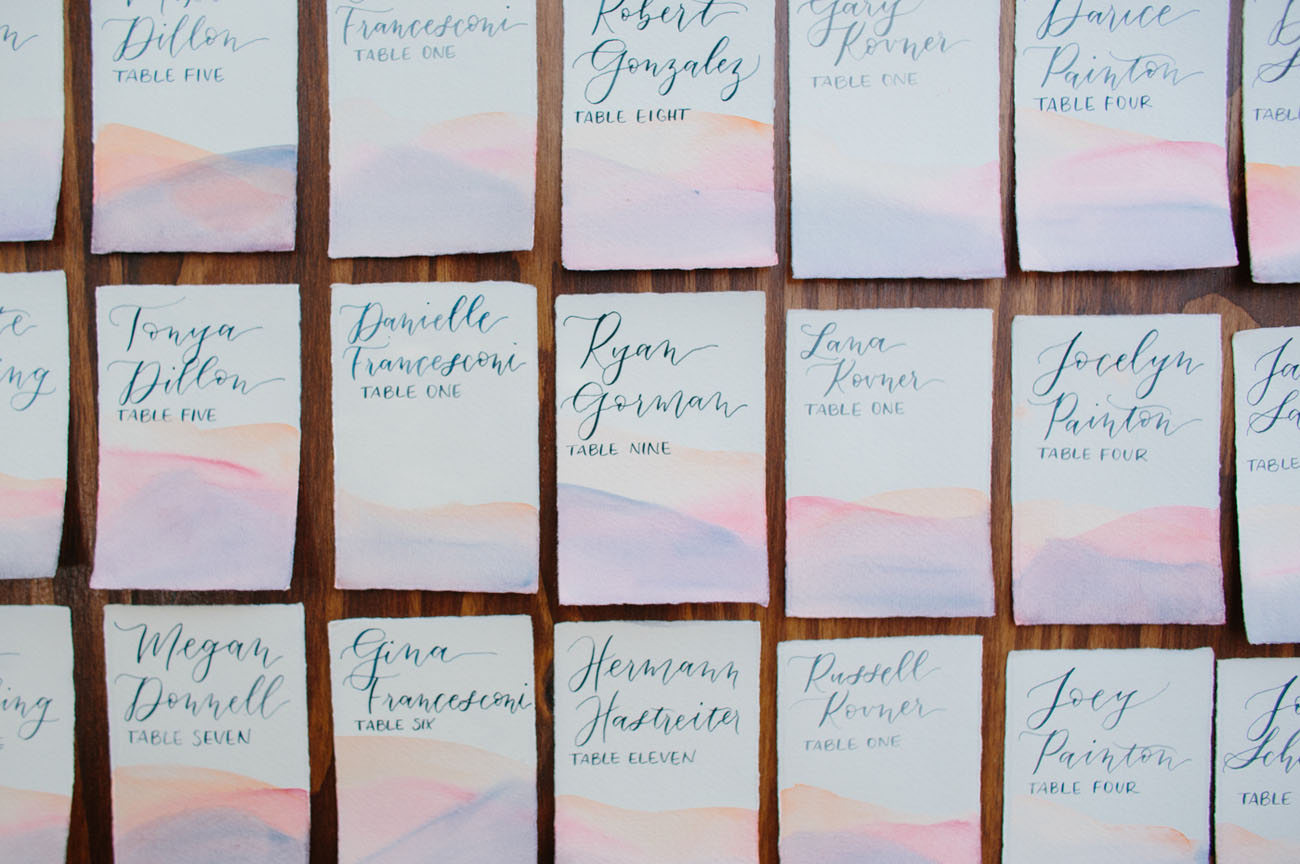 Those darling watercolor escort cards are by Sophia Loves Letters. 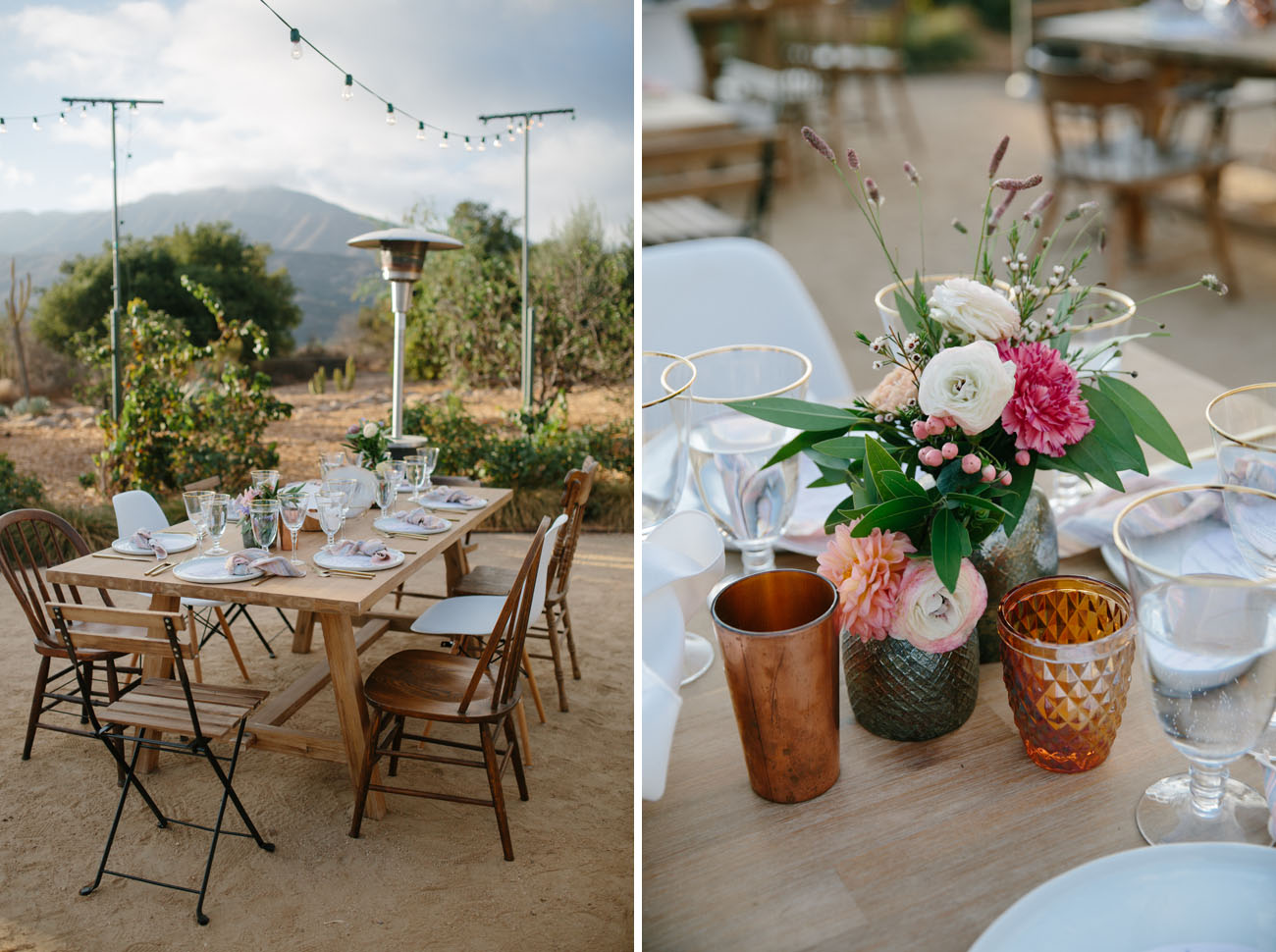 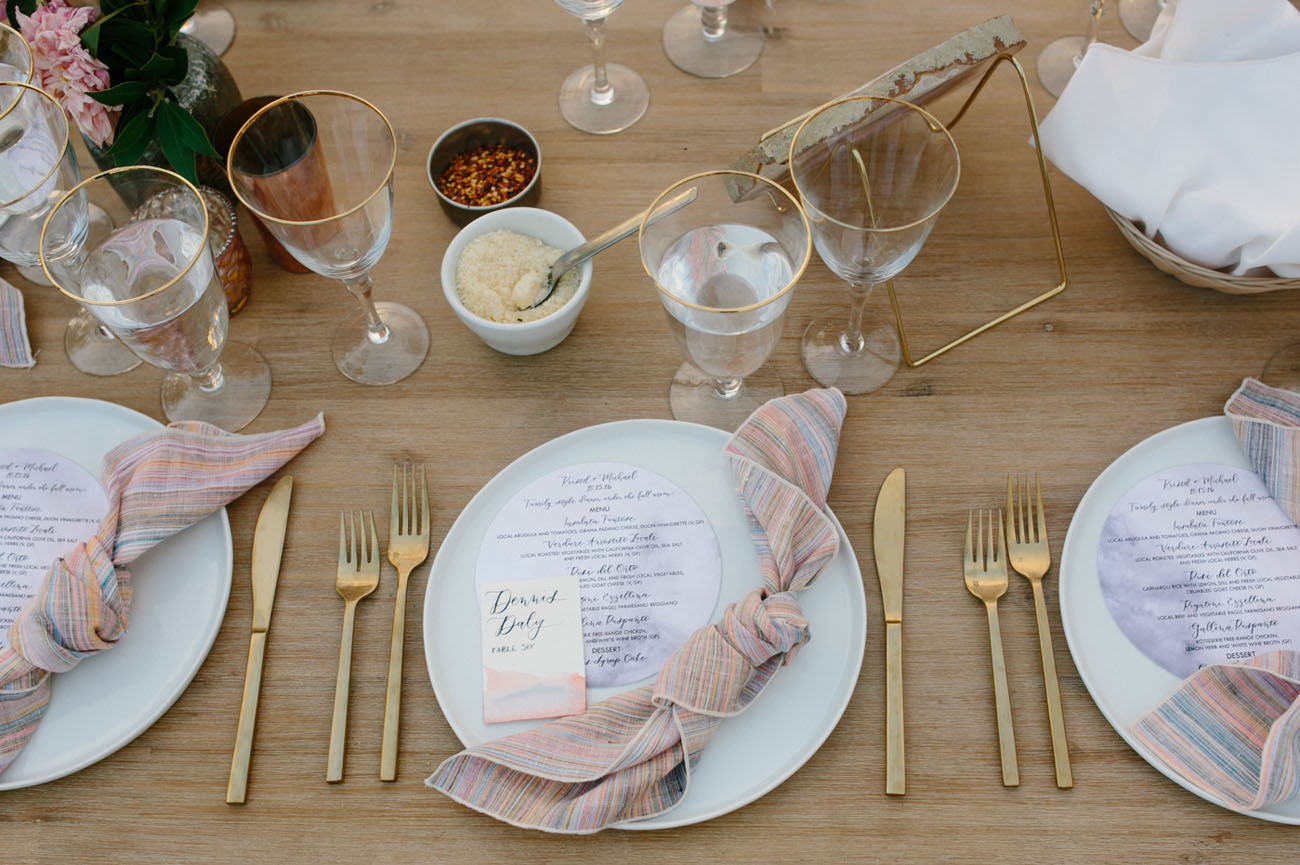 The groom owns a bar in LA and his team created two craft cocktails for the night. They used local lavender for a special cocktail, called the Lavender Luck; they also did a spin on the Paper Plane with bourbon called the Paper Moon. The dinner was catered by a local Italian restaurant — Osteria Monte Grappa — using farm to table ingredients from Ojai. 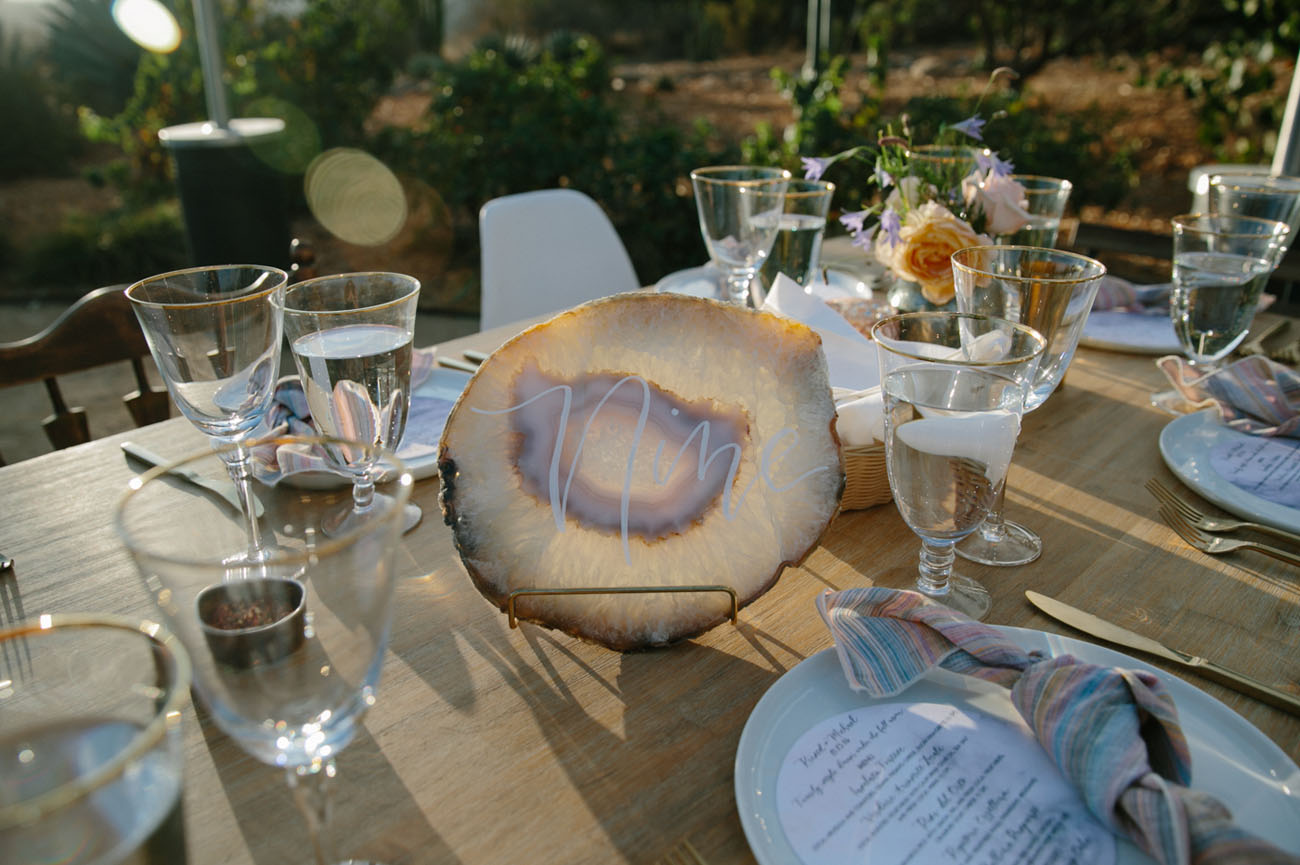 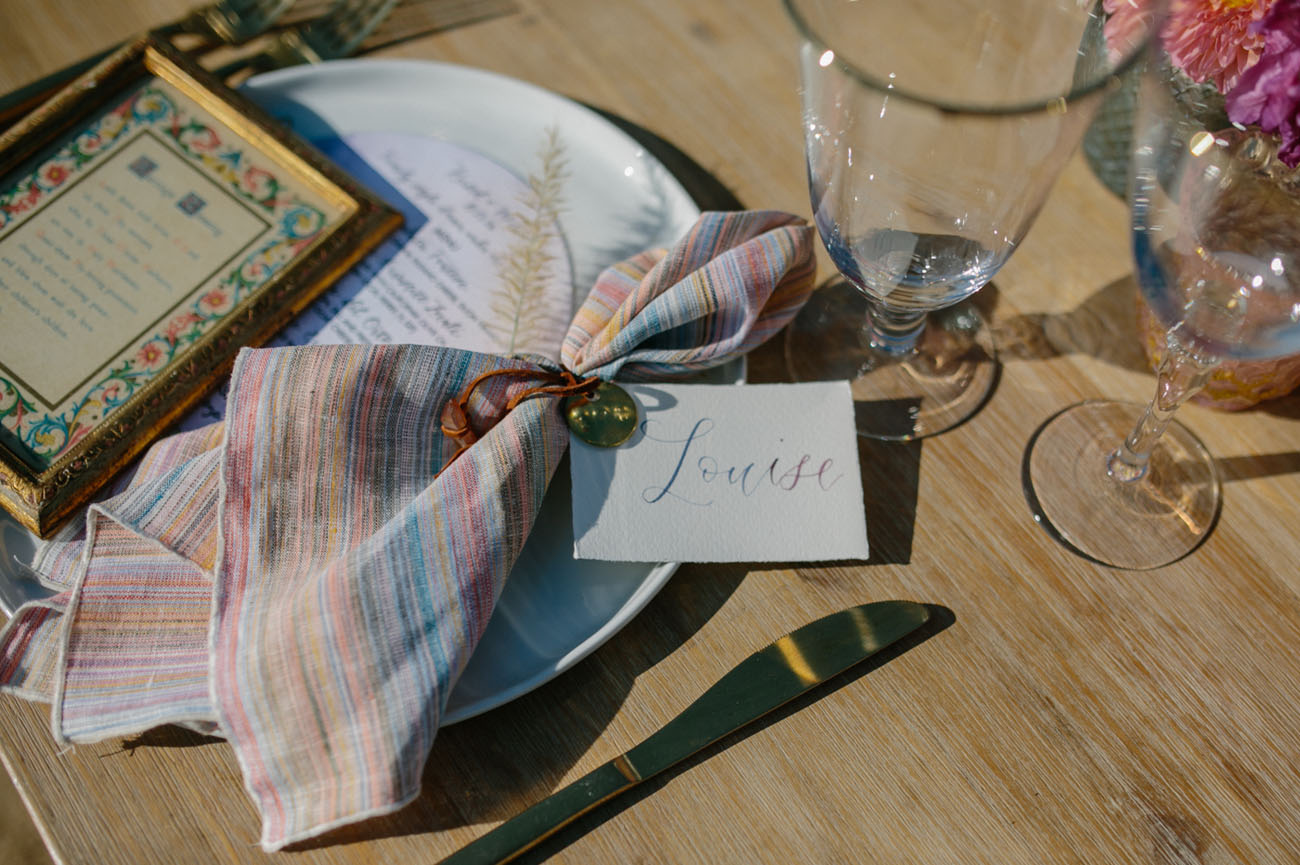 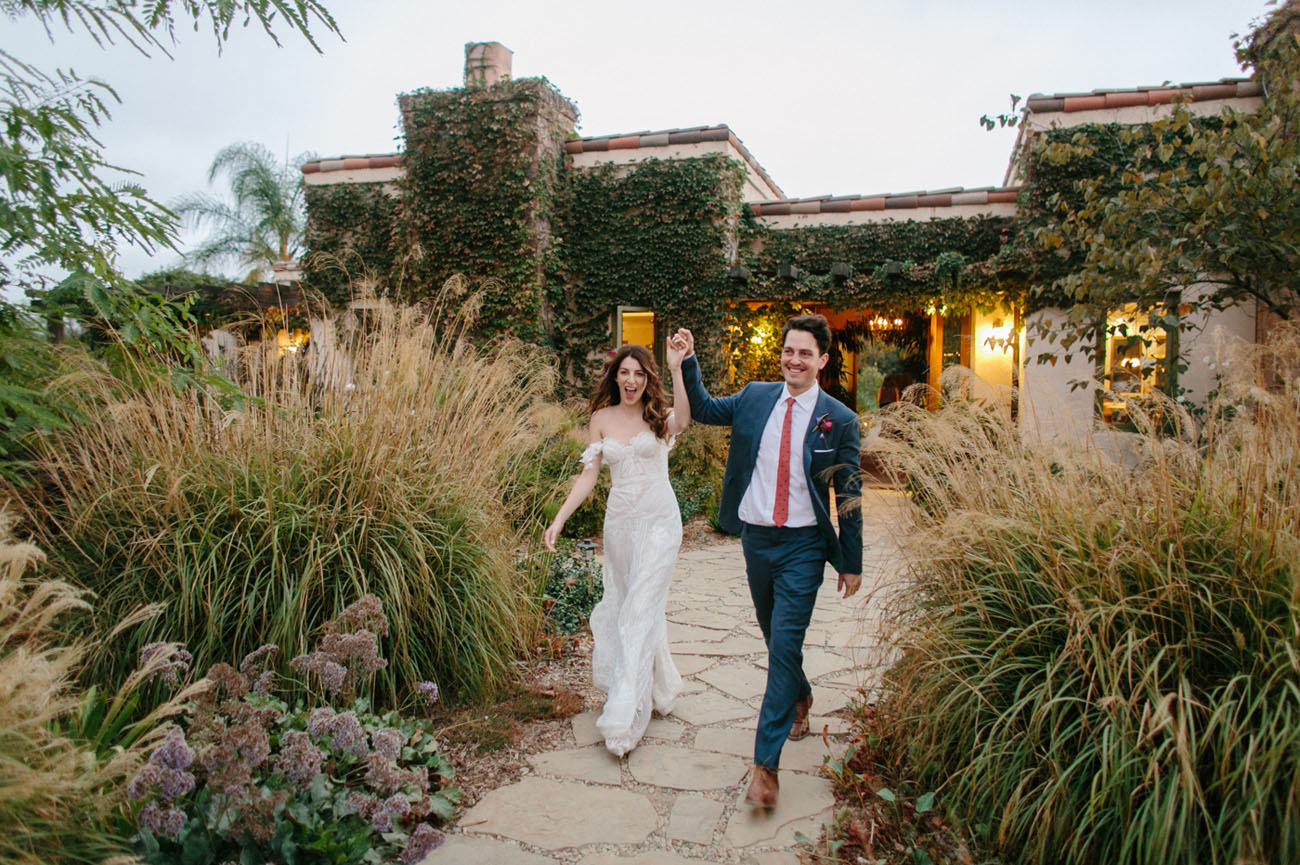 The happy couple! How sharp does Michael look in his suit from Paul Smith + shoes from Cole Haan. 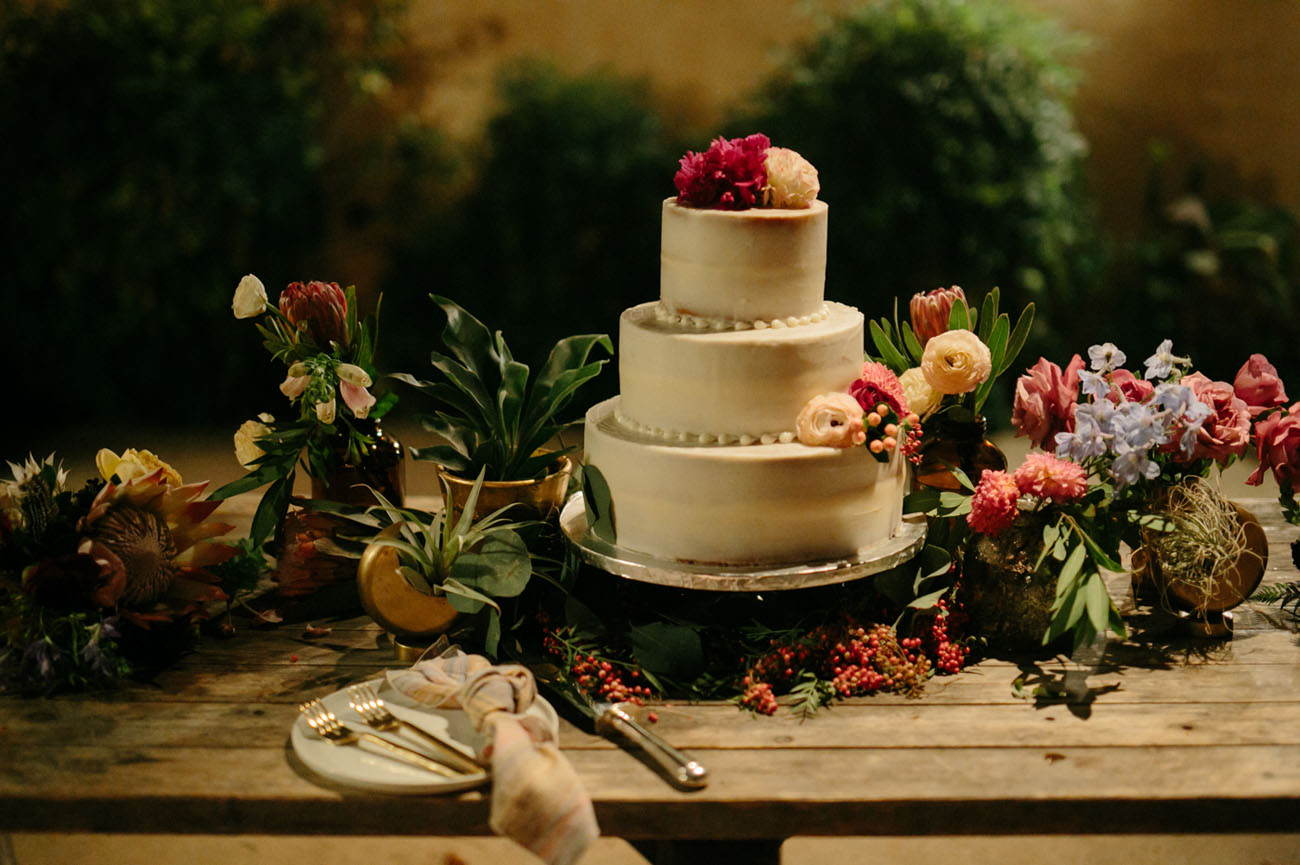 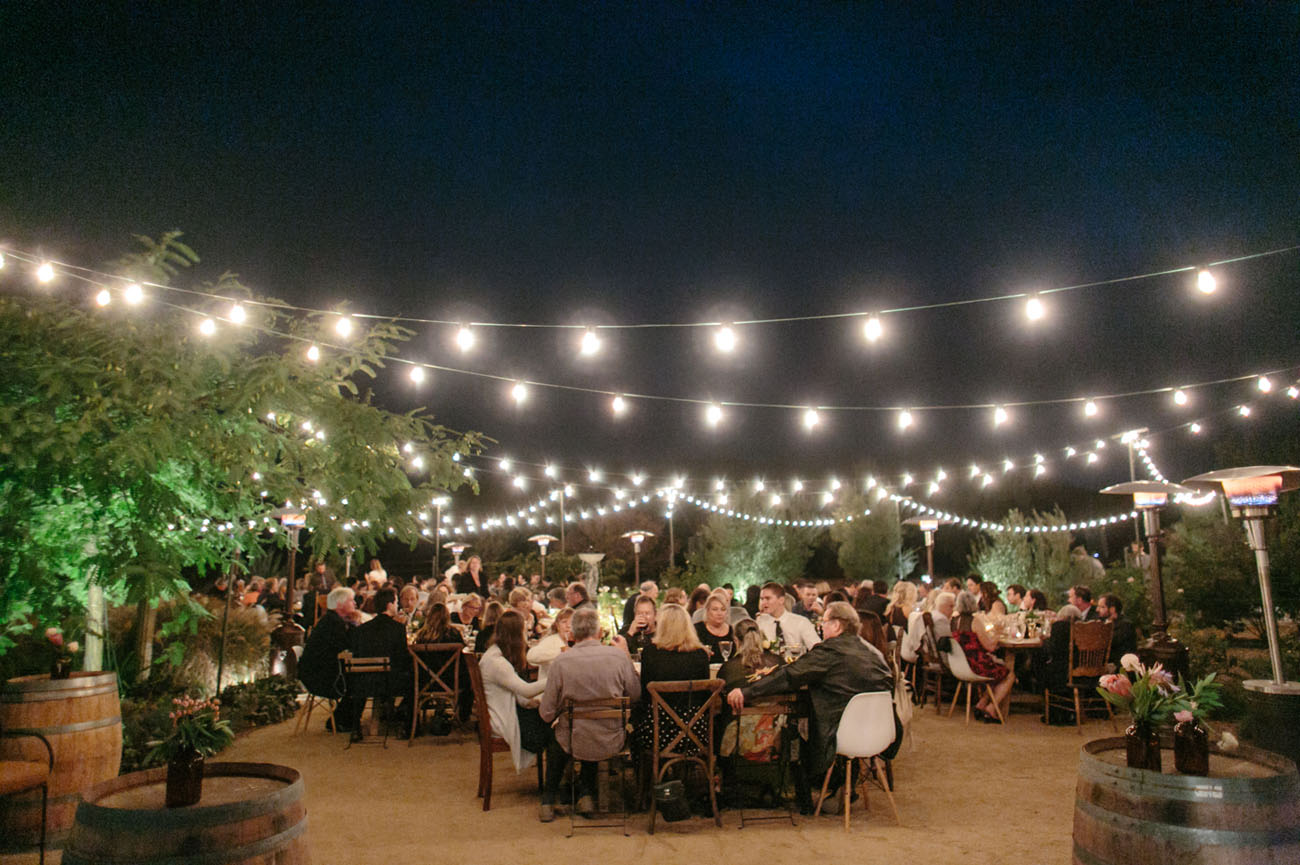 Above all, honor your relationship and shared vision for the day. Don’t get swept up in input from other people; make it yours and let it reflect your relationship. Also, get as much done early as you can, so you can relax and be present in the weeks leading up to the wedding.

K+M share Ojai means moon in Chumash, and the fact that our wedding was the night of a full moon just added more magic. The stars aligned for us that night.