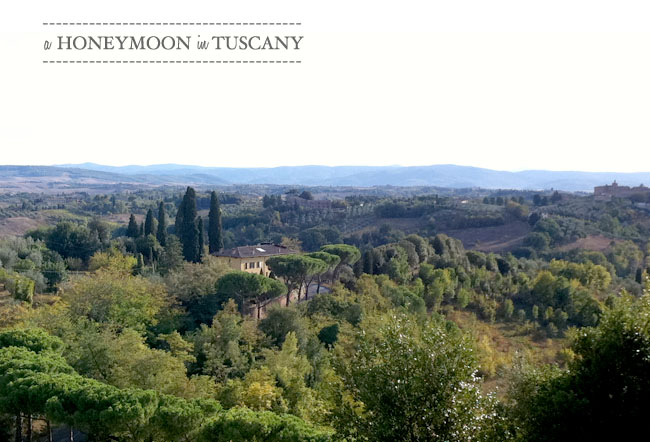 We spent some time in Italy for our honeymoon and fell in love, I guess who doesn’t?! So, we knew we wanted to go back but wanted to see some new areas. For our honeymoon we visited Cinque Terre (our most fave Italian towns), Venice, Rome, Milan and Lake Como. Since we didn’t get to Tuscany the first time, that was a must see for this trip (and if you missed the rest of our European trip, you can also read about our stops to Paris, Belgium and Berlin). We decided to stay in Florence as our base city for the 5 days and then do day trips to some of the smaller Tuscan towns. This worked out great for us, but something to keep in mind is that Florence is a very touristy town and crowded! If I was planning a trip back or making suggestions for your trip, I’d recommend staying in Florence for a few nights, then also staying in one of the smaller Tuscan towns – the best of both! :)

Our first day in Florence rained, but luckily Katie (from Ever After Honeymoons) raved about this wine + cheese bar (Il Santino) near our hotel, so we decided to stop in and give it a try. By US standards, this place was tiny (we almost missed it!) but offered really great cheeses + wines for not a lot of money. Totally recommend it. After a few hours, the rain stopped and we decided to explore a bit. On our map, we saw the landmark Piazzale Michelangelo, which promised great views of the city, so we walked up + up a giant hill (it is quite a hike!) but TOTALLY worth it. The most amazing views of Florence. We went at sunset and it was stunning. I was so bummed I didn’t have my good camera, but it is breathtaking. 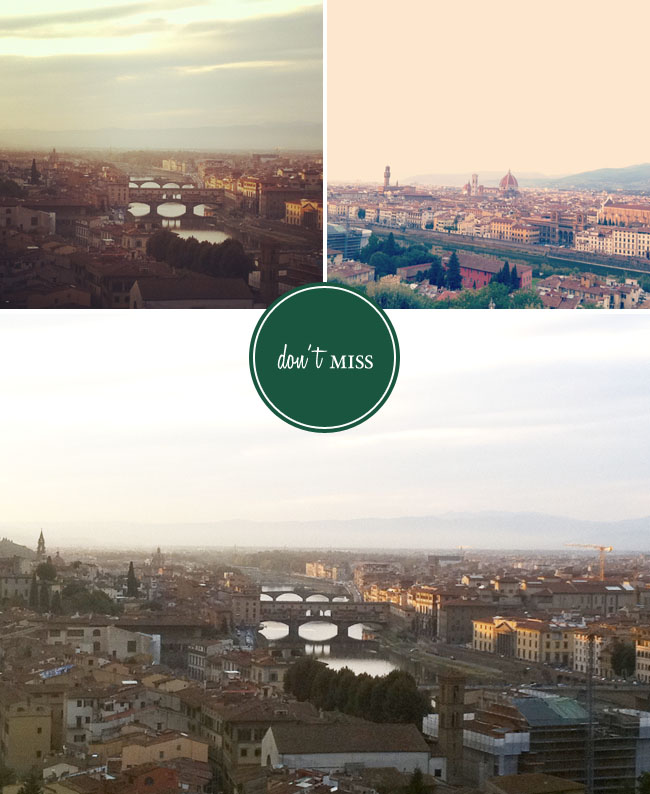 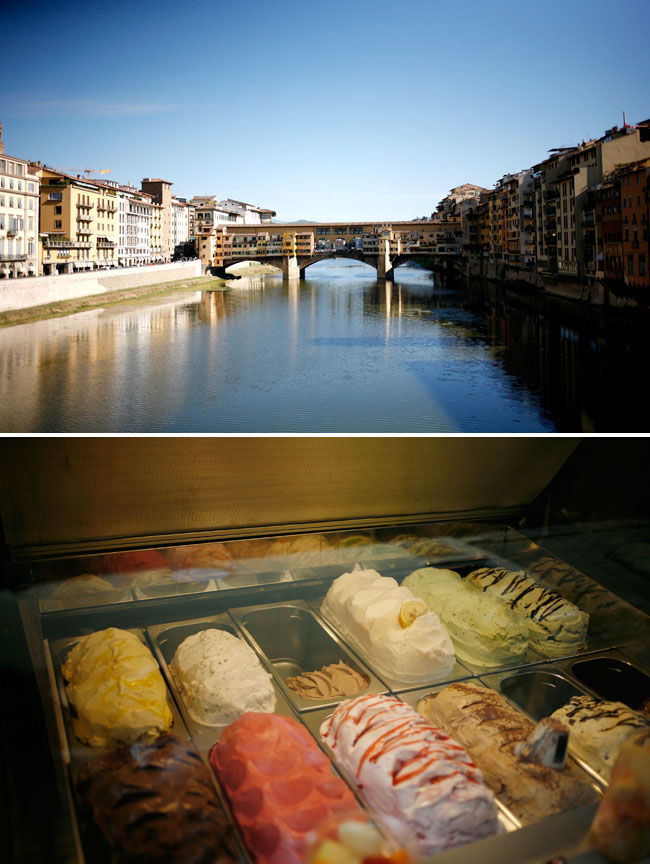 We loved walking around Florence – but since the streets were so crowded, we decided to take a day trip to the smaller town of Siena. I heard great things about the town and was super excited to check it out for myself. There’s a bus that can take you there direct from Florence (it’s a 1 hour trip) and so worth it! 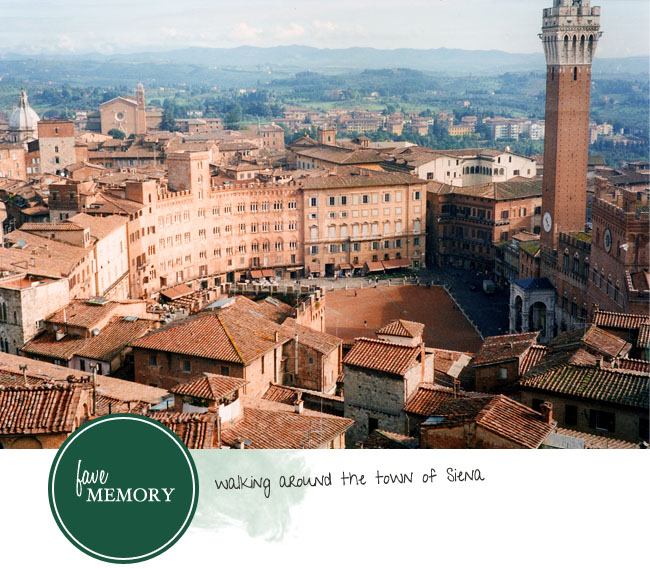 When we arrived in Siena, we had no idea where to go, but that’s also what made it so fun. We just started walking and then quickly began smelling the most amazing food. We stopped at this tiny restaurant for lunch, Osteria la Piana, and it was one of our fave meals of the trip. Pappardelle with wild boar meat (a Tuscan specialty), gnocchi and red wine –so tasty we had a bit more than we originally planned on having, but we were on vacation :). Delicious. After lunch we walked around the town and soon found the town center. Such a great town center that is was declared by UNESCO a World Heritage Site, a must see! (photo above from this site) We took a nap in the sun and just people watched for a while. Then, after a yummy cappuccino, we walked around the town to soak up more of the amazing views of Tuscany – so gorgeous and a perfect day… 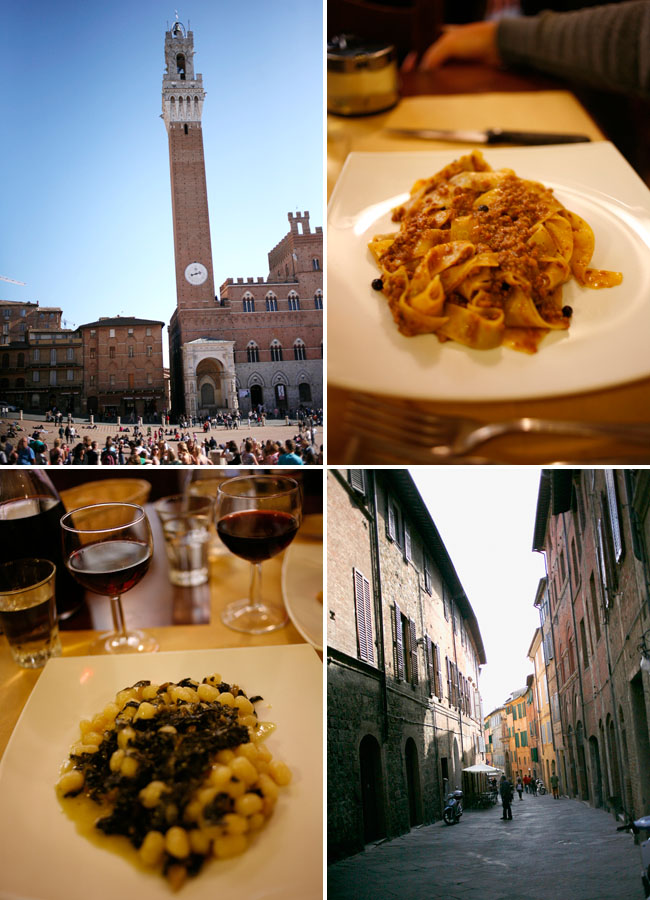 And if you love the idea of getting married in Siena – or anywhere in Tuscany – look up Erin from Tuscany Destination! She helps couples who aren’t from Tuscany with their wedding plans for the area. :) 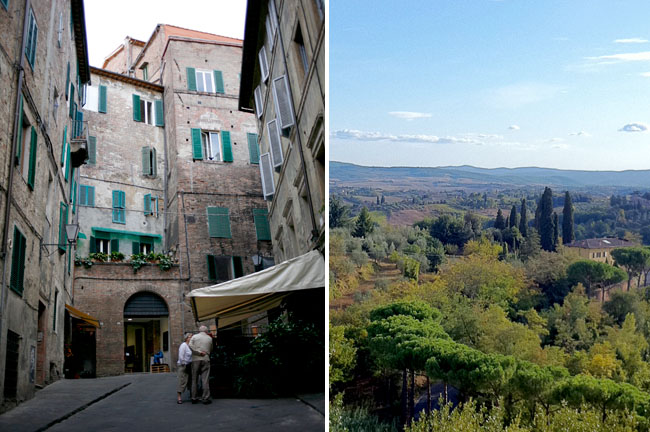 Thanks again to Katie at Ever After Honeymoons for the help with our lodging! The first three nights we stayed at the Hotel Gallery Art. It was right near the famous Ponte Vecchio – so it was nice and central. Awesome modern design + loved the art that was displayed in the hotel. It was fun staying at such a modern hotel in such an historic city.  A great breakfast was also included in the rate. 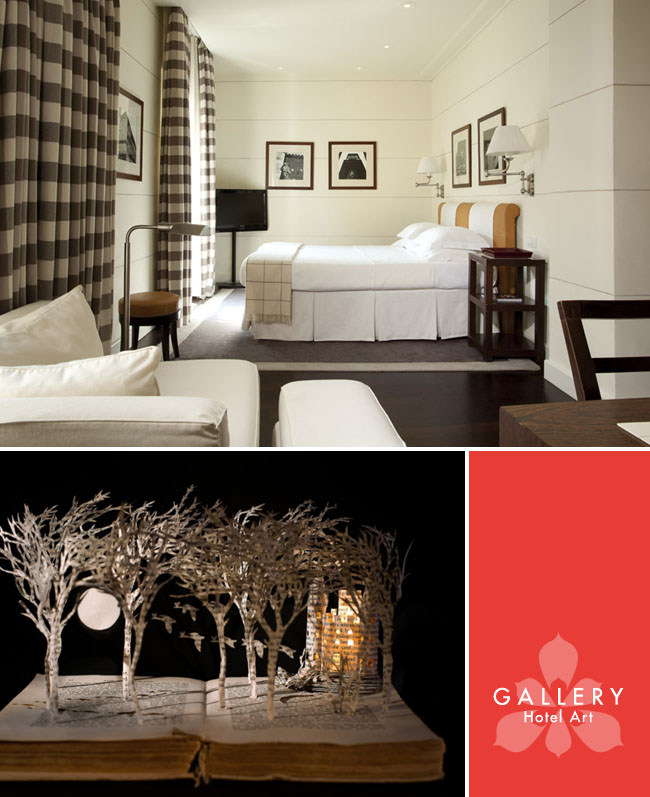 They had a rad bar and restaurant there also – highly recommend both. We usually ended the night with a drink at the bar where they had the most unusual drinks (see below!). The restaurant is great too, since it is more asian influnced and a nice break from all the Italian food (I know I didn’t think I would need a break, but we did love to mix it up a bit!). 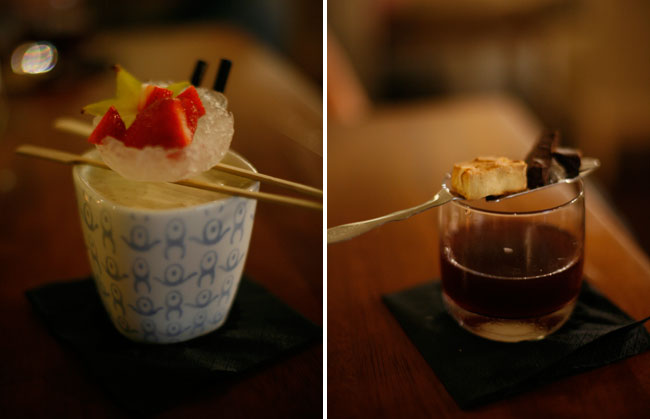 The last two nights we moved away from the center of Florence to the Four Seasons Florence. The Four Seasons is a bit outside the main area of Florence, which provides a nice break from the crowds – it is actually an old palace! Our room was pretty amazing, as were the grounds and the rest of the hotel. We also spoke with the wedding planners there and learned that it’s a popular spot for weddings. Super fun to hear that they share the GWS love of making your wedding day personal as they cater each wedding to the couple – no wedding packages here!  The planners told us a bit about a wedding they were in the middle of planning and it included training birds to fly in and out of the ceremony, it sounded pretty incredible. If you’re planning a wedding in Florence and have even the most extravagant requests, I’m sure this is the place that can deliver. 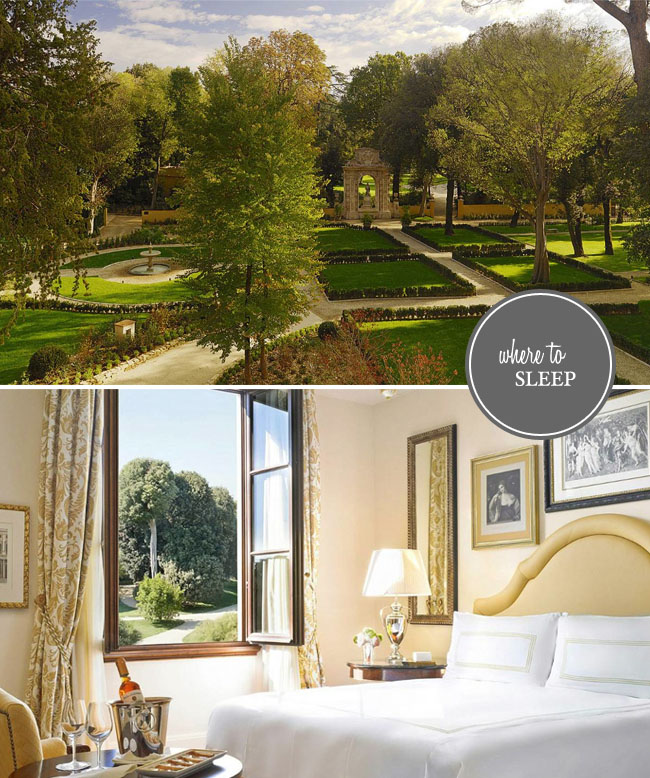 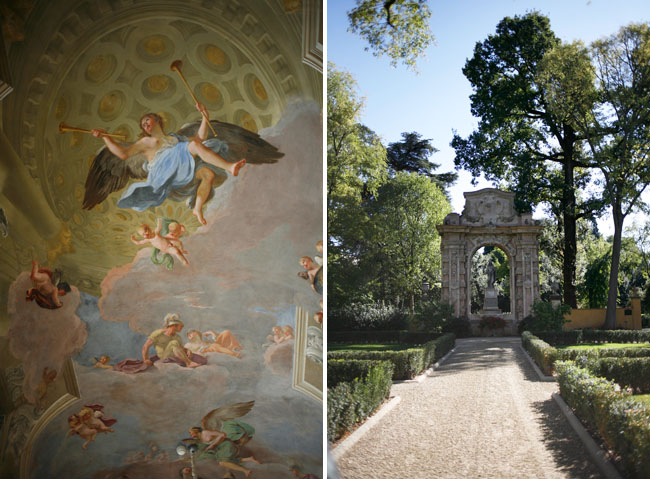 One of our favorite meals of the trip was at Il Santo Bevitore. They had the most delicious burrata, pasta and steak tartare. It’s owned by the same people as the cheese + wine shop we stopped at a few days before (we actually wanted to go here for dinner that night but they were booked, so recommend a reservation – totally worth it!) Something to also keep in mind when traveling in Italy – most of the best restaurants aren’t in the middle of the tourist areas, so venture away from all the tourists to where the locals ear. Also, don’t go anywhere with tourist menus that have photos (that is a big no for me anywhere, but espcially when travling in Europe). 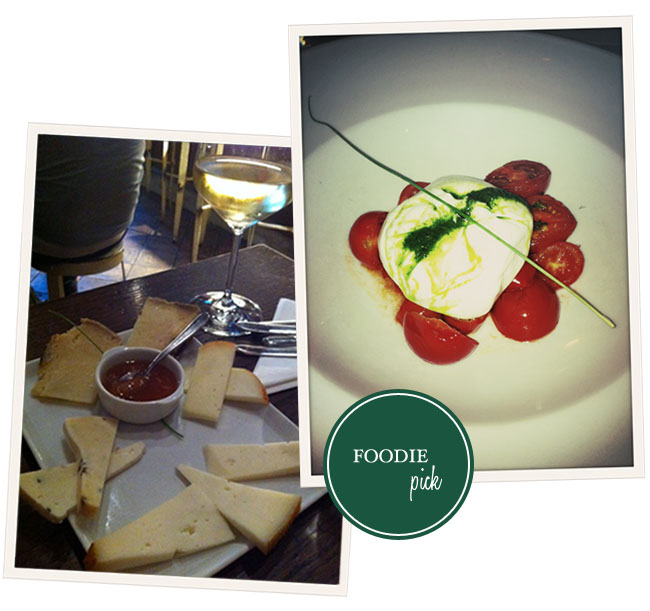 We also took a day trip to Lucca, which is a walled in city about 2 hours from Florence. We found some great pizza there and had a lovely walk around the city. Another tip to rememeber – we were there on a Sunday and they really do close down most shops and restaurants for the afternoon – something to keep in mind! It was a bit chilly that day, but lots of people were riding bikes around the walls of the town which looked super fun. 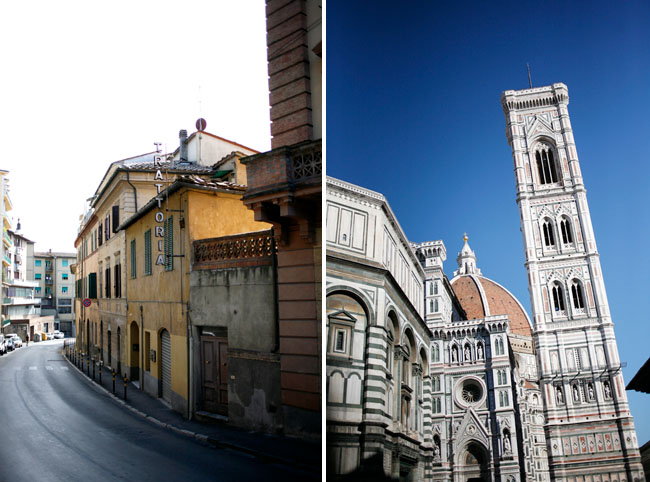 All in all we loved our time in Florence + Tuscany! Can’t wait to go back and explore more of the smaller towns around the area. Is anyone planning a trip to Tuscany for their honeymoon? Or have you been and have a tip to leave? Would love to hear in the coments. :)