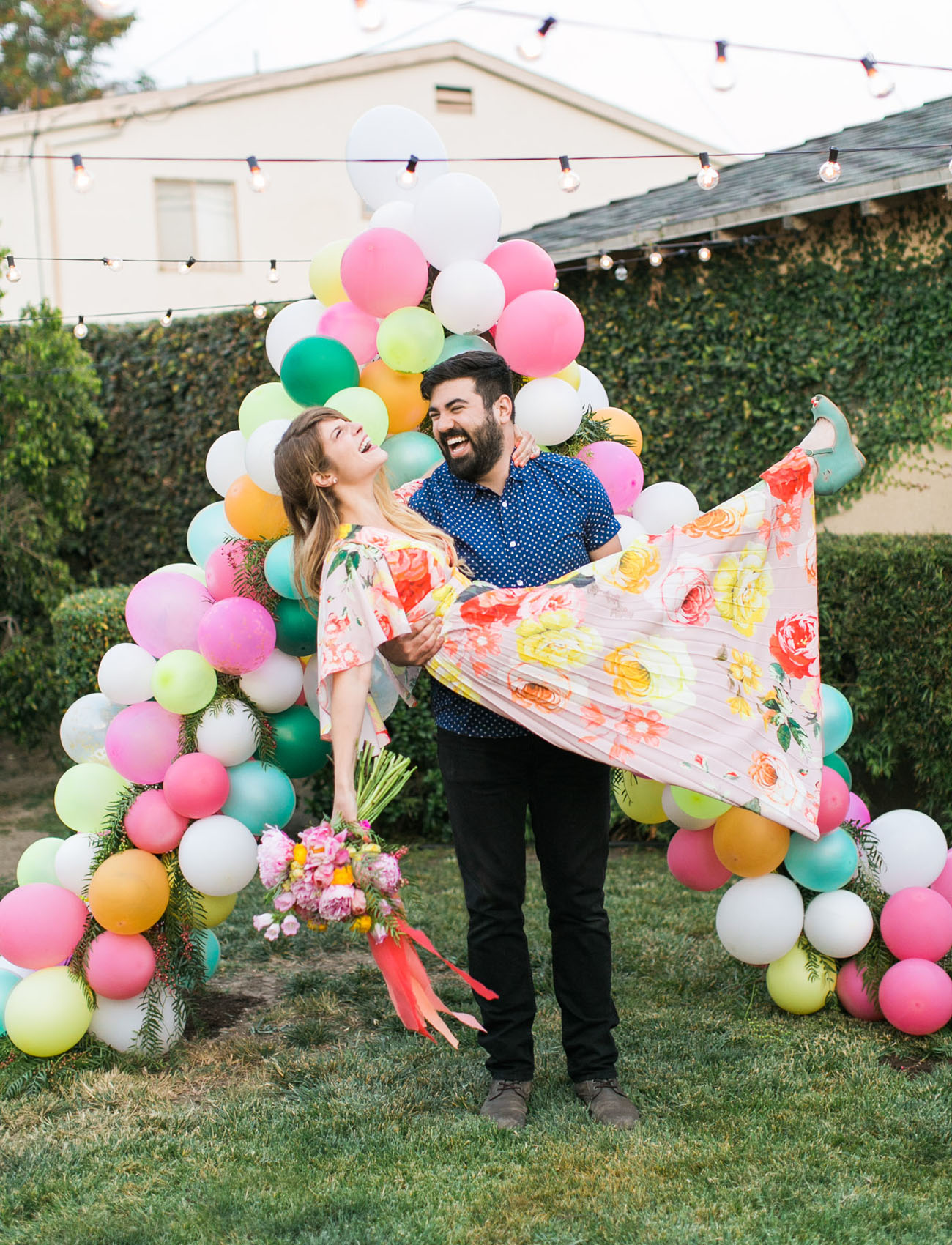 Proposals are the very start to most of what we get to share here daily on GWS, so we love when we get to give some love to this amazing, exciting event in a couples life! Today we’re sharing how Mike popped the question to one of the sweetest, most talented wedding photogs around, Mary Costa! And, spoiler alert, it involves LOTS of balloons + flowers (by Shindig Chic) sparklers, friends + fam and, yep, fun :) We could definitely gush about the details for a while, but figure it’s best to let Mike, Mary + the photos by J Wiley Photography do all the talking! 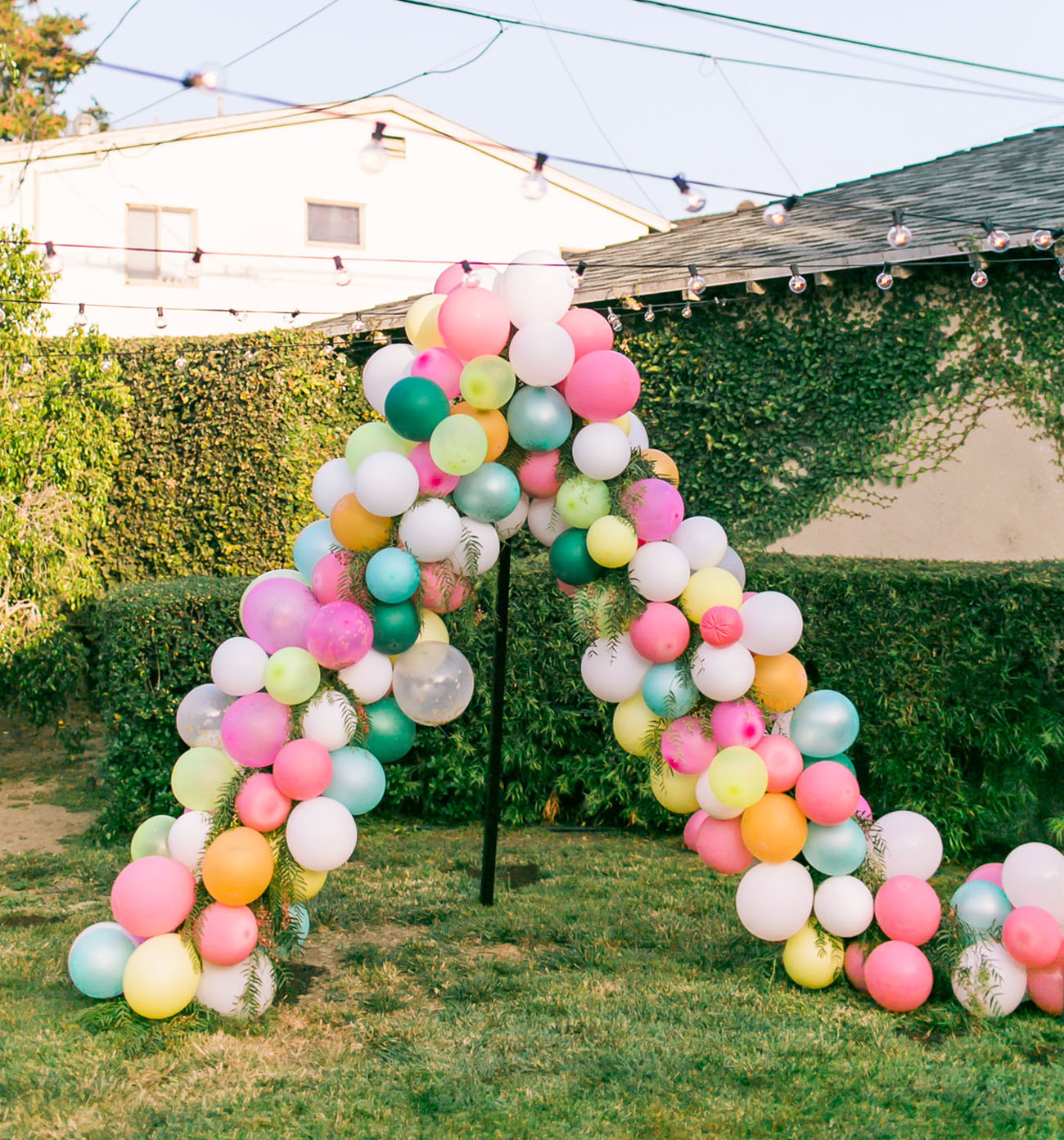 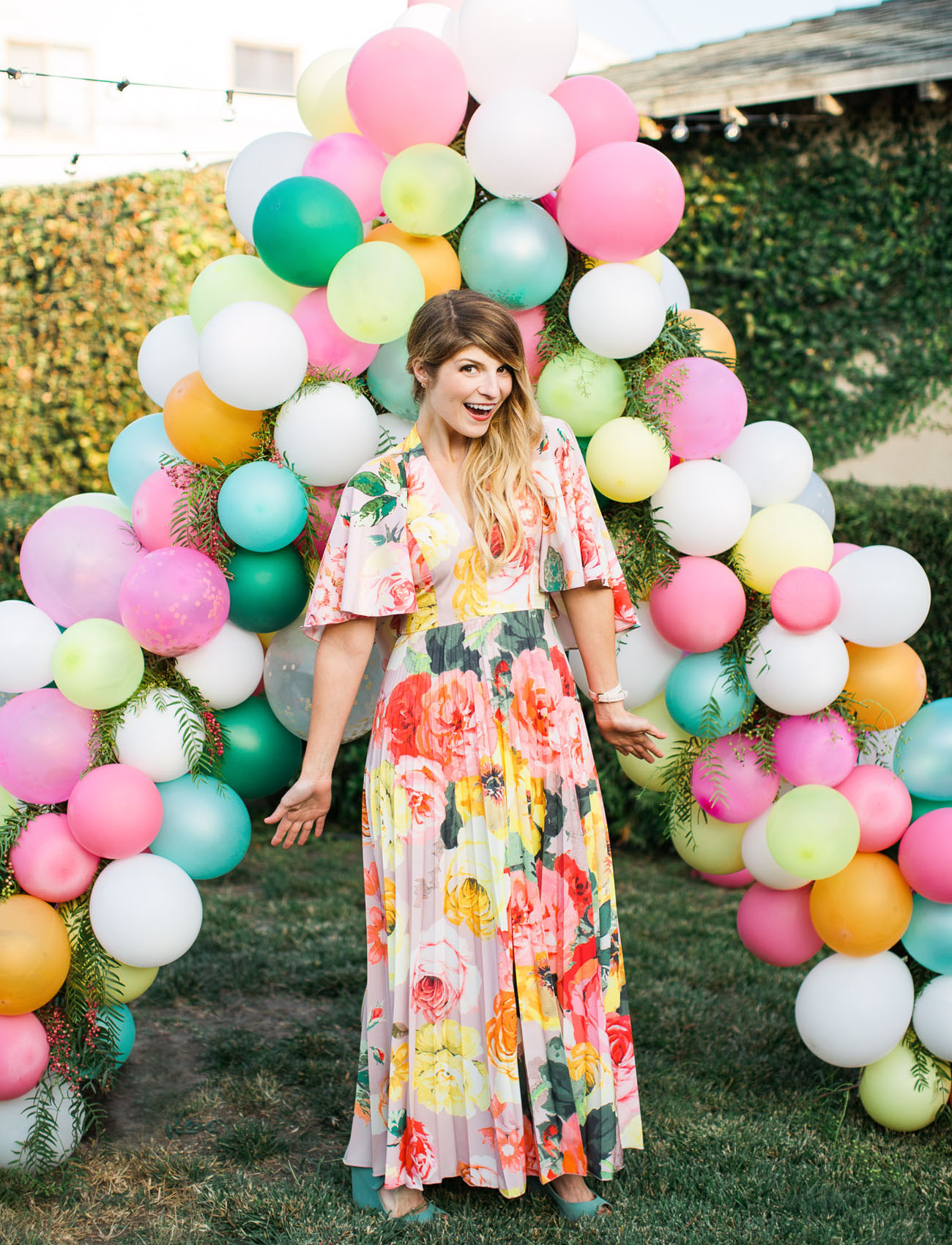 OK, srlsy, how cute is Mary?!! She looked extra-adorable on proposal day, too, in one of our very fave floral print dresses from ASOS! 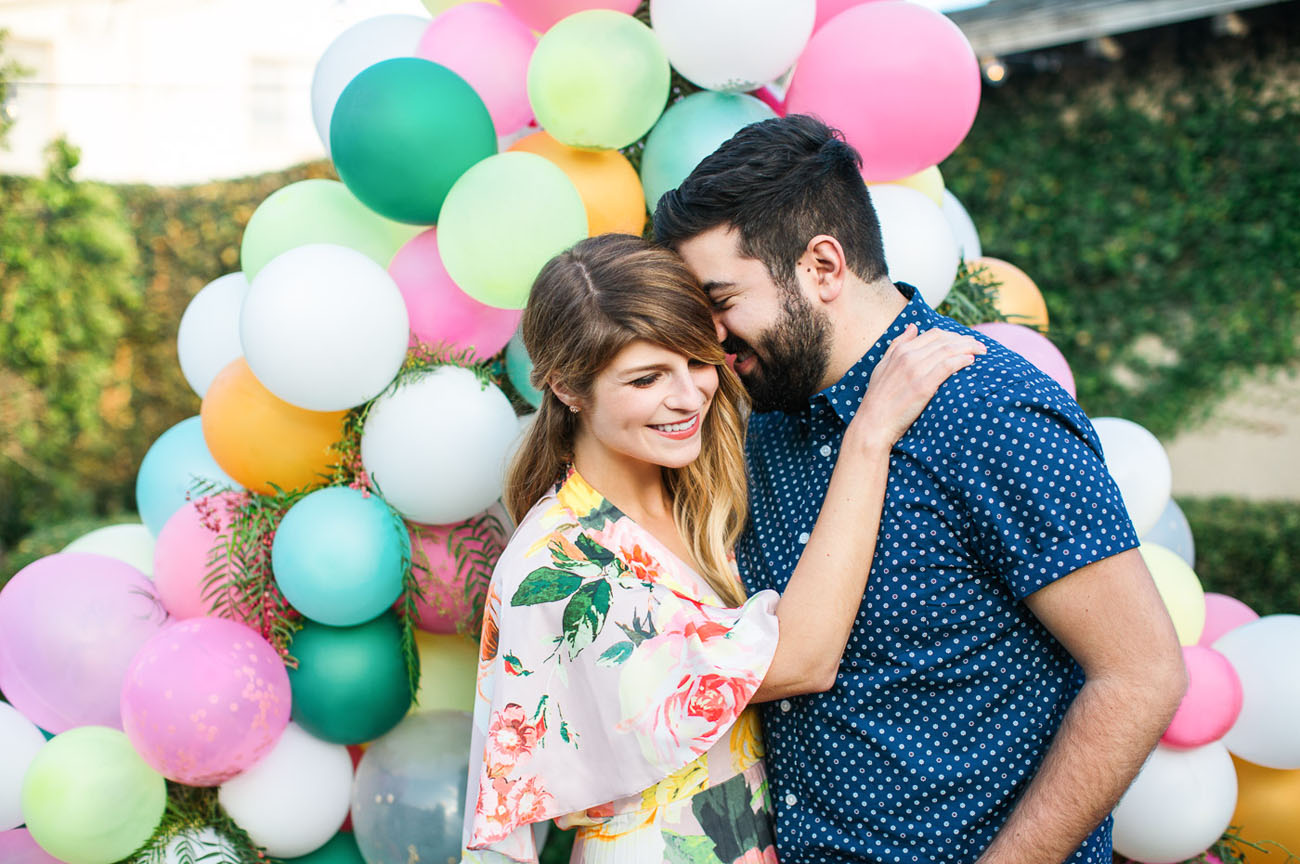 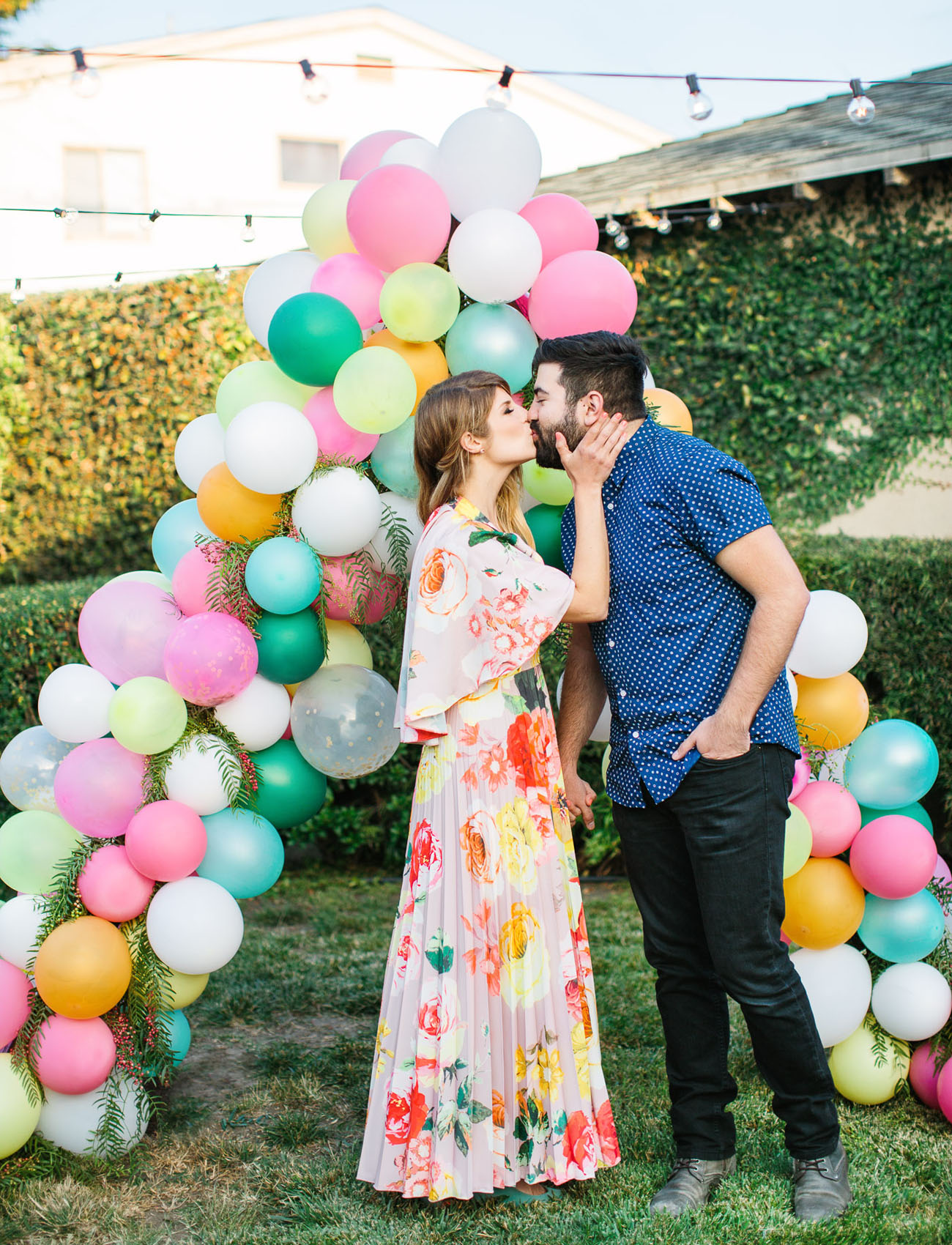 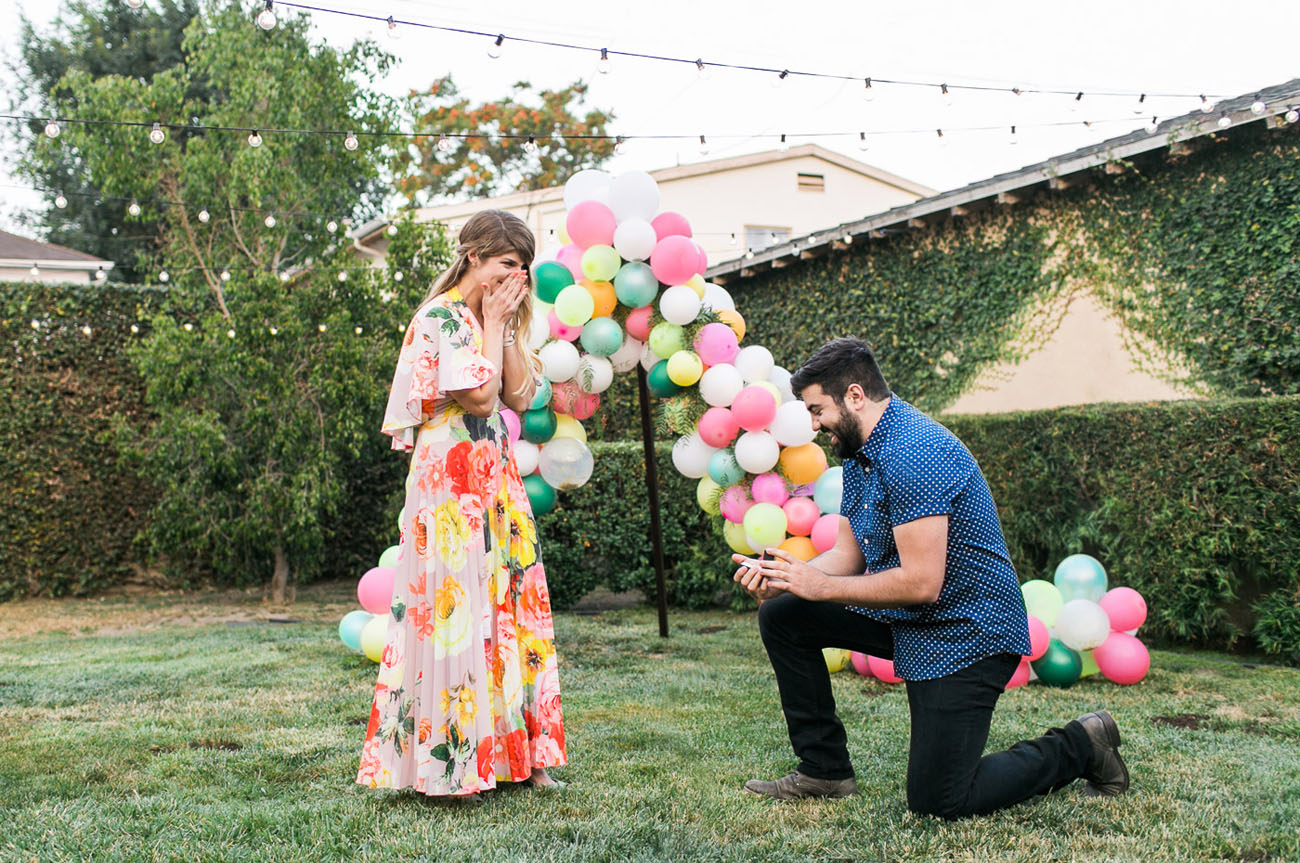 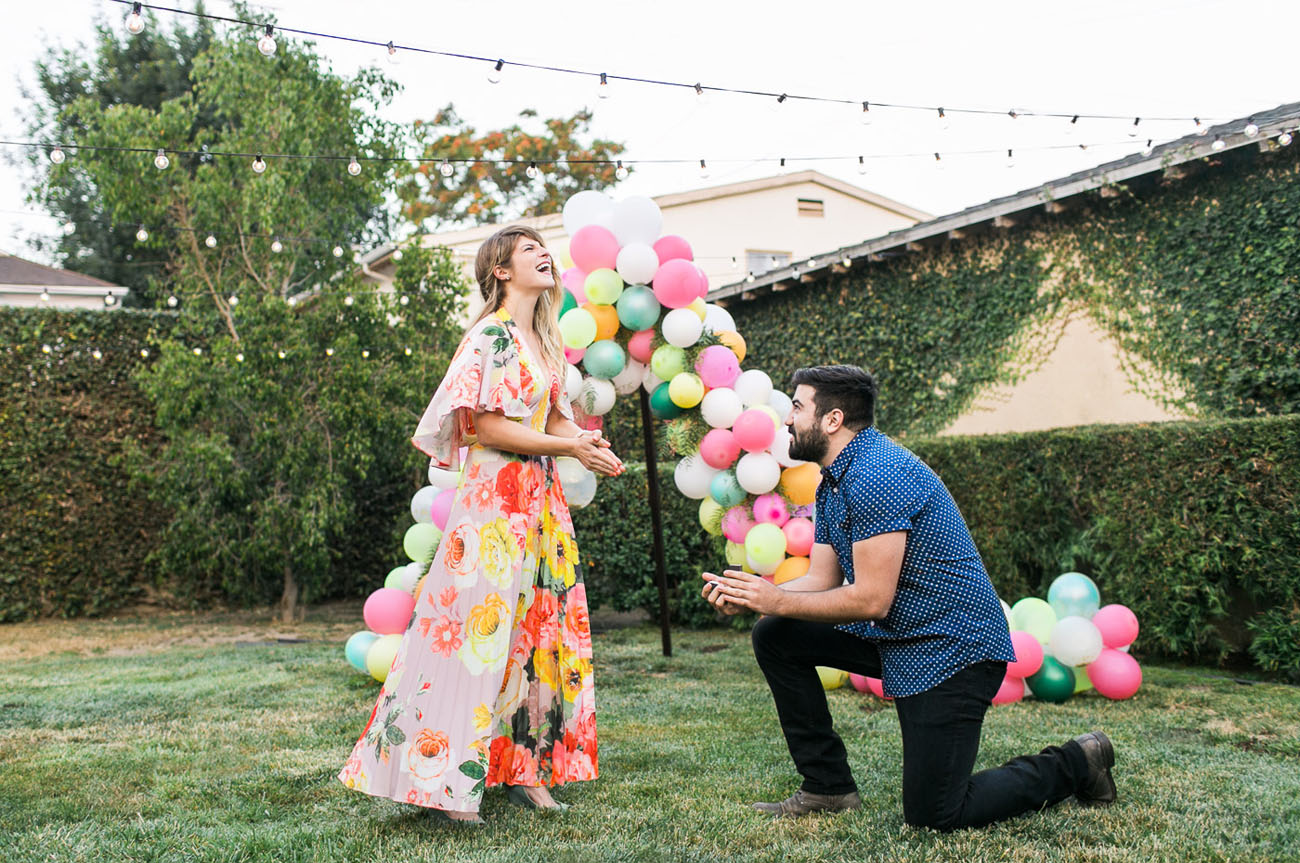 Mike’s Perspective: The universe first led me to Mary in January 2012, but we didn’t actually meet face-to-face until April 2013. So let’s see here, if my calculations are correct that’s over a year of cyber stalking. Let me explain. This could take a while.

At the time I was working at a big fancy agency, just trying to keep my head down and do my best to “make it” in La La Land. Needless to say, I wasn’t remotely interested in dating anyone at the time, or even toying with the idea of creating an eHarmony profile (ah, the innocence that once was the world without Tinder!). We had just gotten back from Christmas break, and Ryan, my desk mate, was showing me some photos of an epic bonfire he had orchestrated at Dockweiler Beach over New Year’s. I was marveling at these insane photos of dead Christmas tress going up in flames. As he’s clicking through these photos we stumble upon a wide shot of Ryan and his group of ragtag New Englanders. My eyes zoom in on this mystery woman. Some people say they don’t believe in love at first sight. I agree – the mere idea of falling for someone purely from an aesthetic vantage is both unrealistic and shallow. That said, have you ever seen a picture of this girl? Go ahead, try not to be completely smitten as you scroll through her Instagram feed. I double dog dare you! 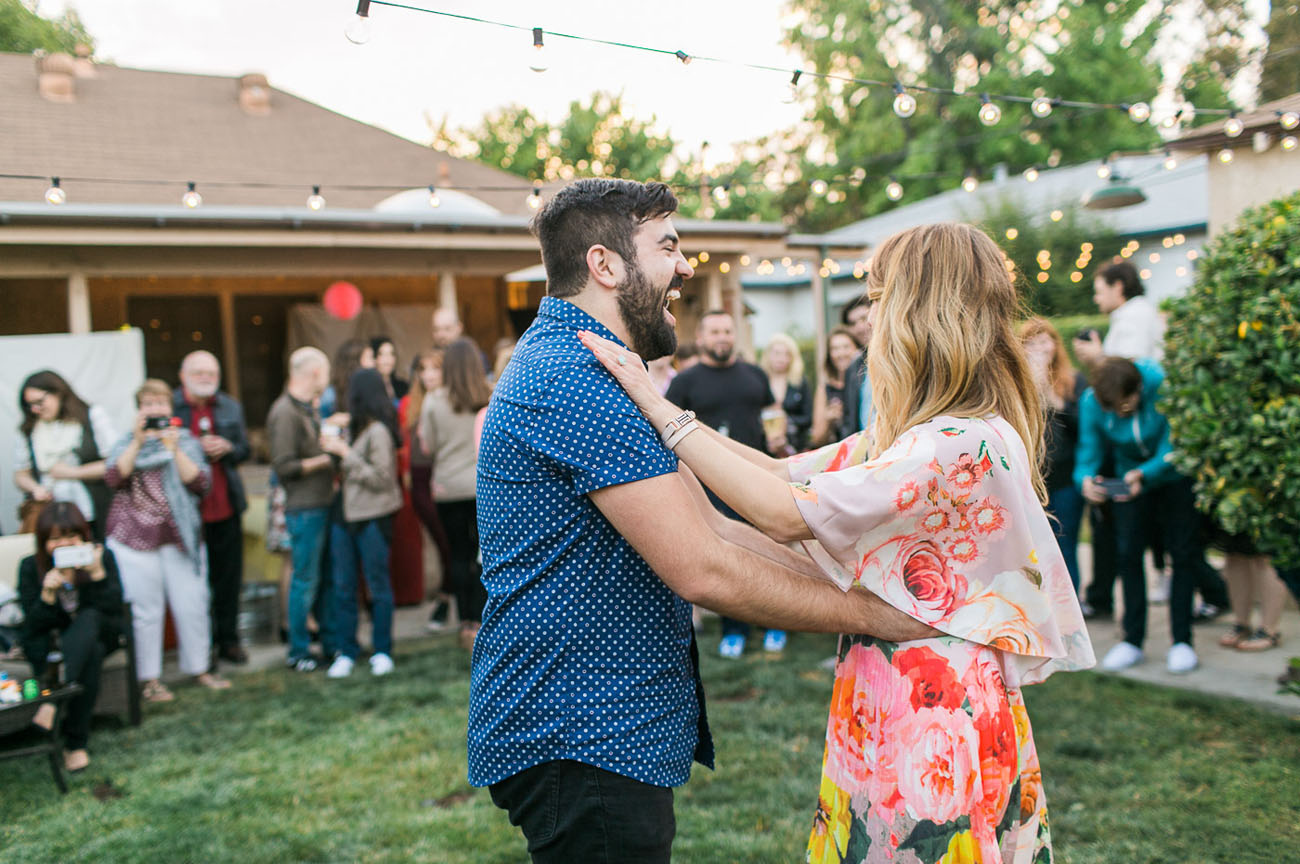 Unfortunately, Mary was off the market. So began my long phase of stalking her on social media. Granted it’s not too hard to get to know her via the World Wide Web. Between her blog posts, Instagram feed, website, etc….I had a bounty of material to digest before we ever even spoke to one another. Some say creepy, I say endearing! You be the judge.

Fast forward to 2013. Mary just happens to tag along with some mutual friends to see my band play a show in Silverlake. I got off stage, and was swiftly introduced to Mary Costa. What a name, what a gal. I shook her hand, as to not overtly lead on that I had been studying her from afar for months. Not 10 minutes later, I came back to find Mary and properly introduce myself, but alas she had left already. Curses. A few more months go by, and now I happen upon a bar in Hollywood for Ryan’s friend’s birthday party. Let’s take a moment to thank Ryan. Thanks, Ryan! Okay, don’t blow it again, Mike. Tell her you want to take her out. Tell her you love her blog. Tell her you want to be her husband. Maybe leave out that last part. 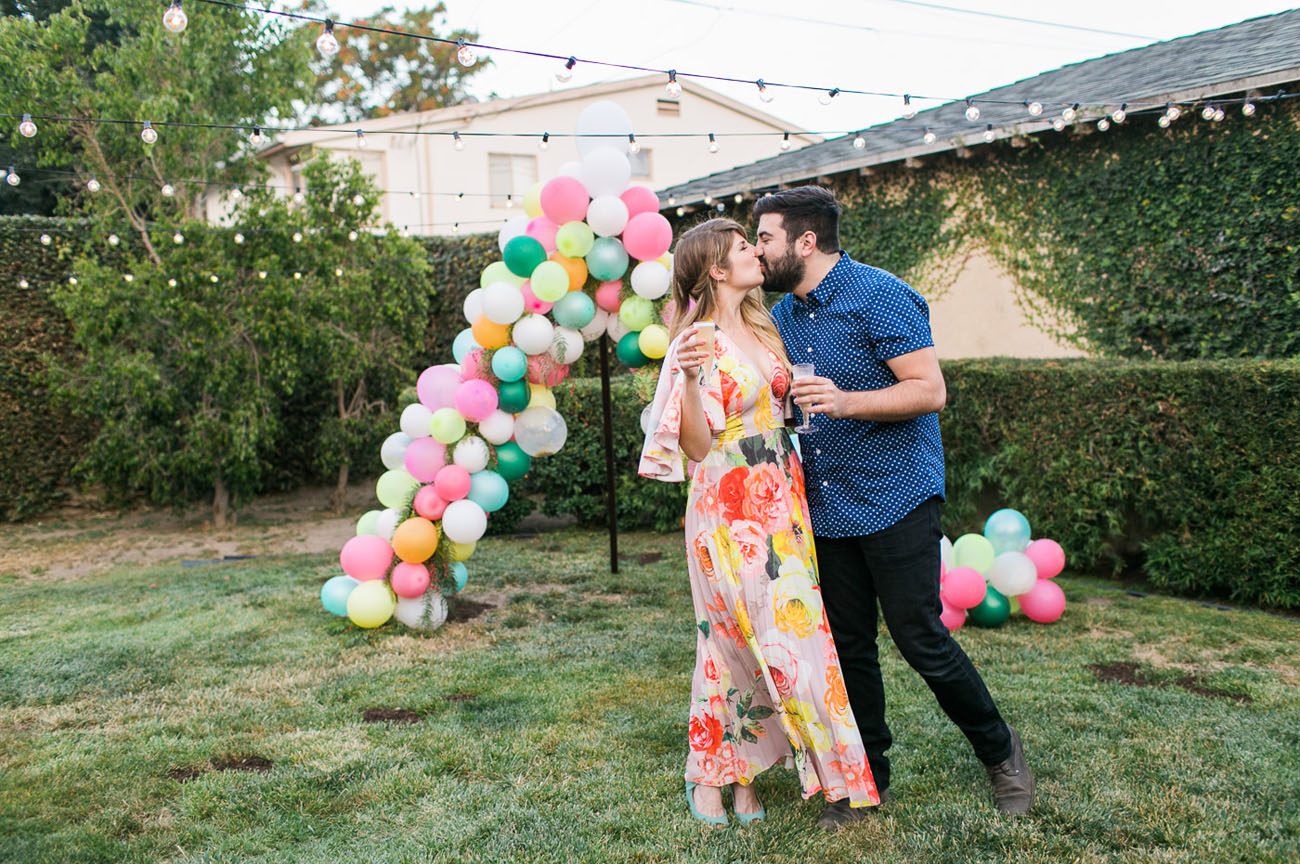 You can probably see where this leads from here. I asked for her number, I took her on a date, we made out like teenagers…the rest is now and forever the amazing adventures of Mike & Mary!

I knew I wanted to make Mary my wife as soon as she professed her undying love of The Wonder Years, and proceeded to reenact a scene from Season 4 in public. I just had to figure out the exact moment to trap her forever! Kidding. Mary had been planning her 30th birthday party since the day after her 29th, and I knew this would be the perfect time to hit her with the ‘ole Yes or No question. Her lovely parents (shout-out to Trudi & Ed!) flew in all the way from New Hampshire to celebrate, and my best friend Christen offered up her beautiful backyard to host this special moment. Let’s take a moment to thank Christen. Thanks, Christen! I cannot tell you how nervous I was. Actually I can. I was very nervous. Fortunately, Mary and I are lucky to have a plethora of super duper talented friends, and I had no shame in enlisting their help. Shindig Chic went above and beyond constructing a massive balloon arch & bouquet, and J Wiley Photography flawlessly captured the moment. I call Jen the queen of candids! I’m also extremely impressed with everyone who attended for not spilling the beans. Mary truly did not see it coming, and for that I am very proud of each and every one of you who was clued in weeks in advance. I trust you more than I trust Congress.

A quick note on the subject of “the ring”, as I feel I cannot sleep soundly without sharing this valuable information with the world. Mary’s group of lady friends had the brilliant idea of making a Google Doc with ring preferences (sizes, stones, shapes, etc.) years ago. That way when the time came, us menfolk would know exactly what to get. Genius. Jewelry is so specific, and all any guy wants to do is get something the girl will love. So there’s my tip. Now let’s take a moment to thank Mary for saying yes. Thanks, Mary! 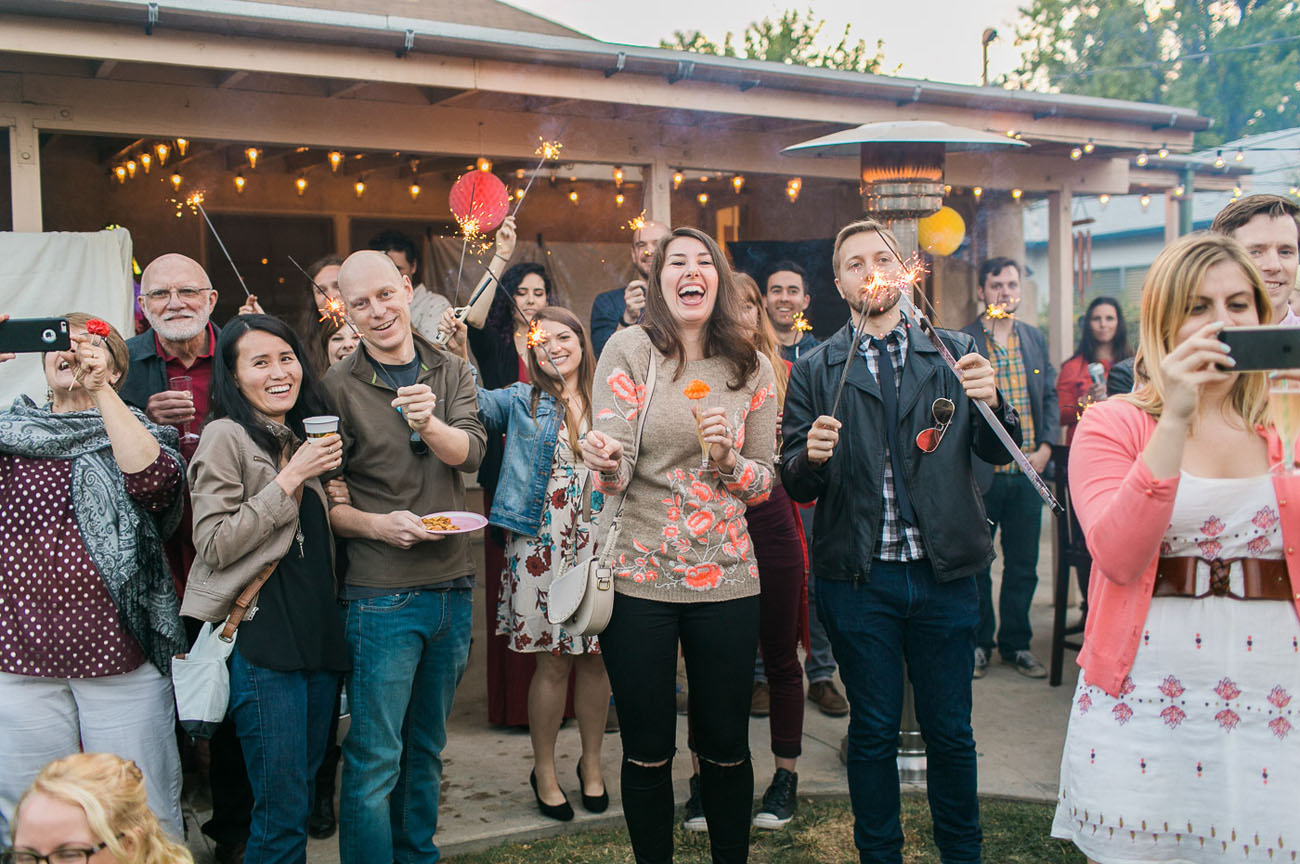 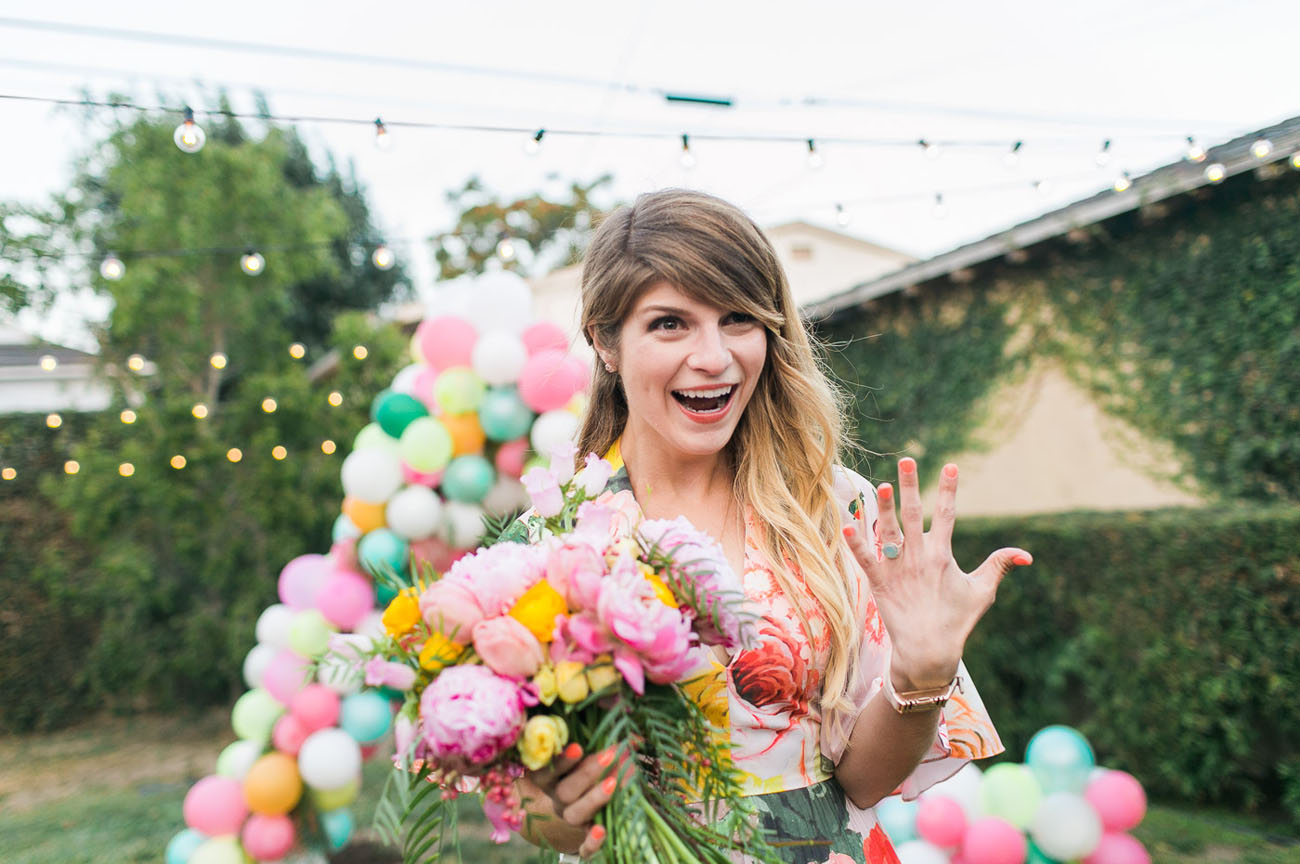 Mary’s Perspective: Mike and I met on April 18, 2013 (I have a thing for dates). He was playing drums at a show in Silverlake, and I accompanied our mutual friends, Jennie and Jeff, to the concert. (Fun fact – Jennie will be officiating our wedding!) Mike and I had emailed a couple of times previously because he was looking for a band photographer, although unbeknownst to me it was a clever rouse for us to meet. He had spotted my photo on Facebook over a year back and was no stranger to my photo blog…! The first thing I noticed about Mike was his amazing energy and brilliant smile. I told him so after the show, but he thought I was friend-zoning him! A few months later our paths crossed again at our friend Ellen’s birthday party in Hollywood. We hit it off immediately and went on our first date to a concert at the Bootleg in Echo Park on 7/11. We’ve been inseparable ever since!

His proposal was a total surprise! Sure, I’d been dreaming up engagement scenarios in my mind for awhile (I mean, who doesn’t??) and a birthday party proposal was definitely at the top of my list, but I honestly didn’t see this coming.

Our dear friends Christen and Brett offered to host my 30th birthday party in their backyard. My parents flew in from New Hampshire, and so many of my favorite people came to celebrate! 10 Things I Hate About You (my favorite movie) was playing on repeat, there was an abundance of chocolate chip cookies, and the photo booth was hopping. Everything was off to an amazing start!

I briefly got suspicious/hopeful when the amazing team at Shindig Chic showed up with a giant surprise balloon arch, and when my talented friend Jen of J Wiley Photography offered to take photos of Mike and I in front of it. Mike said, “Wait, I have to empty my pockets!” and I looked for a ring box – but nope, he really just needed to empty his pockets! I appreciate that I’m marrying a man who knows to avoid the horrors of a phone bulge in photos, hah! We took some pictures and went back to the party, so I was finally convinced that everything was simply for my 30th birthday. 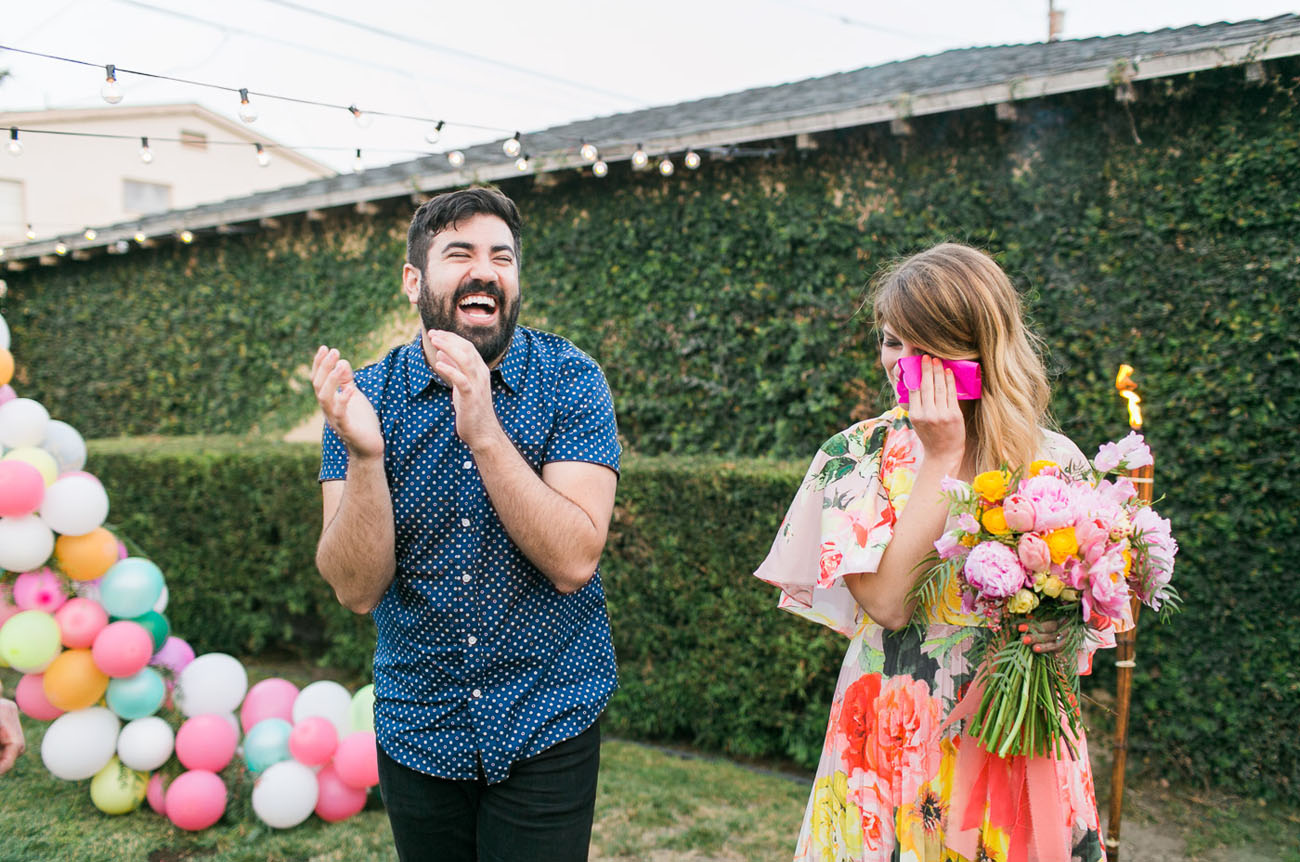 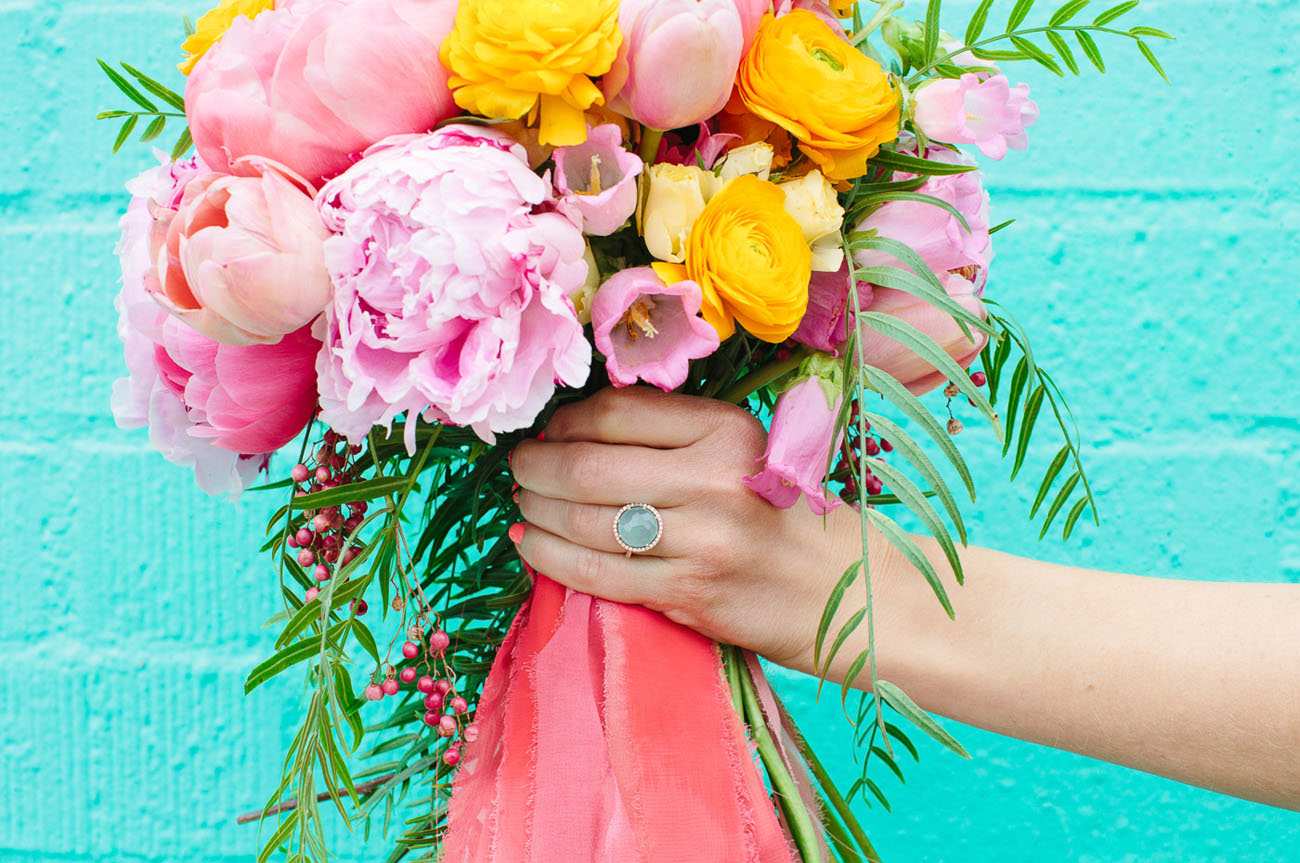 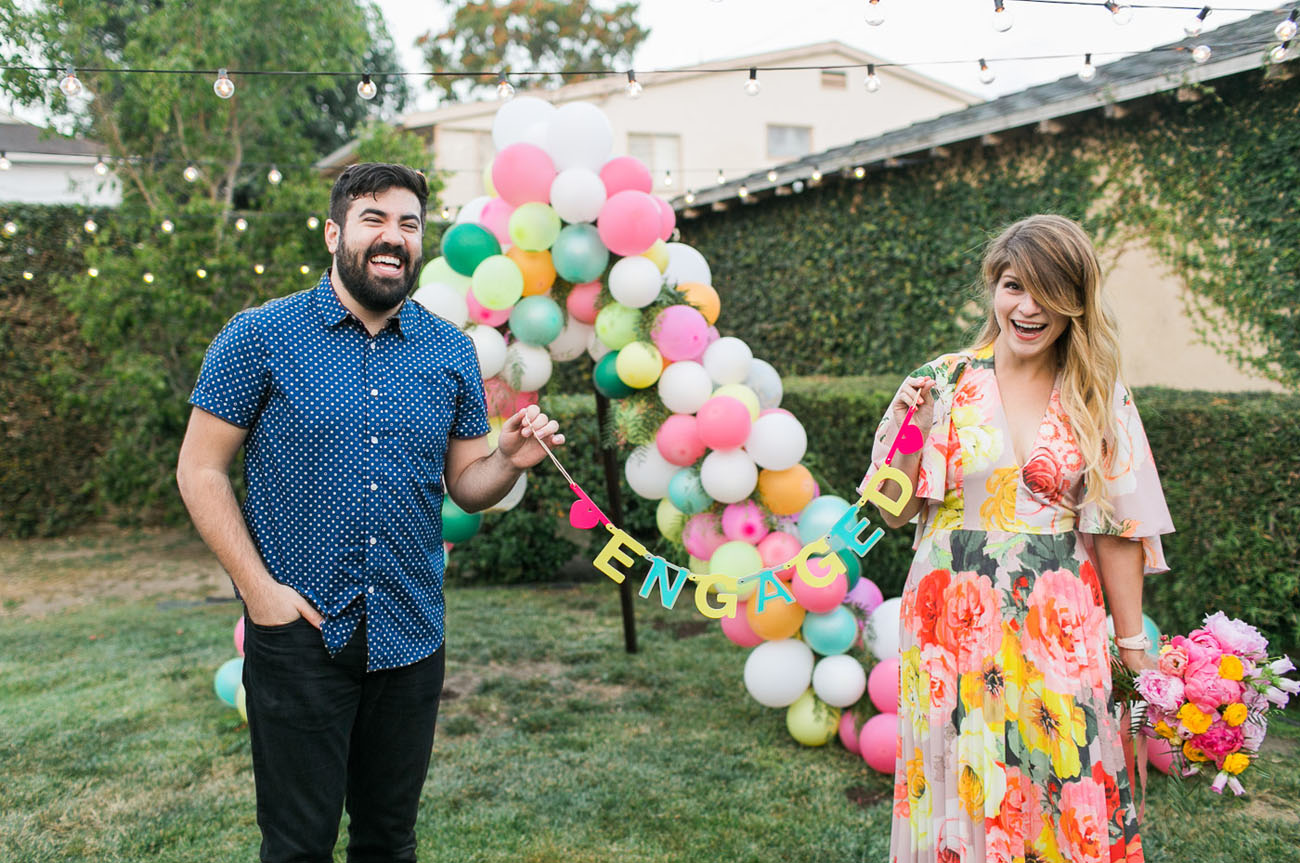 About an hour later Mike suggested that we should thank everyone for coming to the party. Without hesitation I ran out to the lawn and made an impromptu speech. I was so blown away by all of the efforts people had gone to that I was already choked up when Mike started talking after I finished. I was also confused when he started nervously repeating what I had just said, but then quickly realized what was happening when he dashed behind me to grab a ring box from Brett. The entire crowd (myself included) burst out laughing when Mike got down on one knee and said, “I’ve never done this before, bear with me for a moment!” I was so overwhelmed that my immediate reaction was “There are so many people here! To which he responded, “I figured you like a spectacle.” TRUTH. Among other things, Mike asked if I would dance in the kitchen with him forever. “Always!”

Before I knew it our song, “Looking Forward” by Crosby, Stills, Nash and Young was playing overhead. My cousin, Joel, handed us glasses of champagne, people lit off sparklers, a beautifully crafted bouquet from Shindig Chic appeared, and my friend, Ana, handed us a sign that read “engaged”! We were on cloud nine for the rest of the evening – it was truly one of the happiest nights of my entire life. 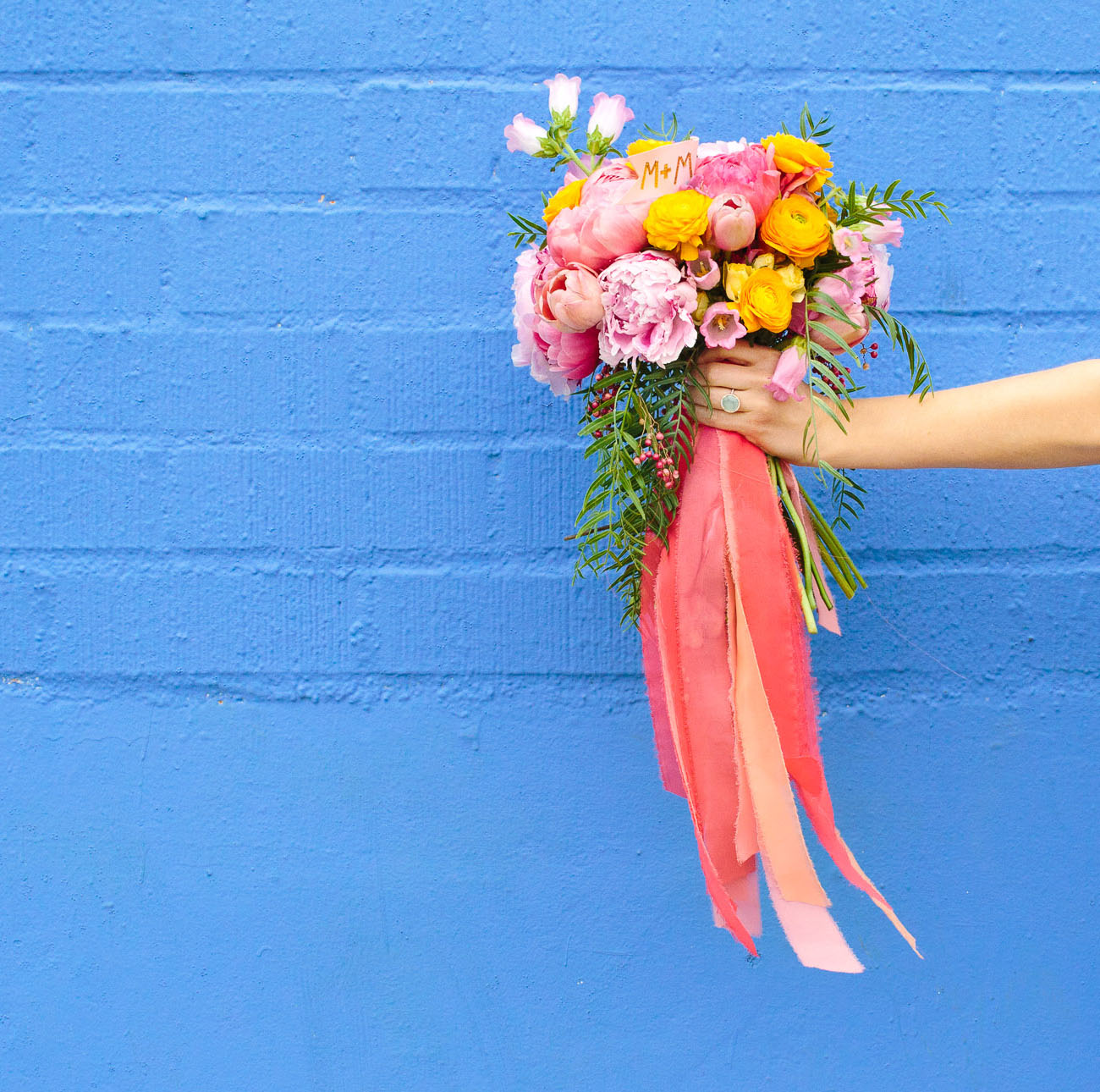 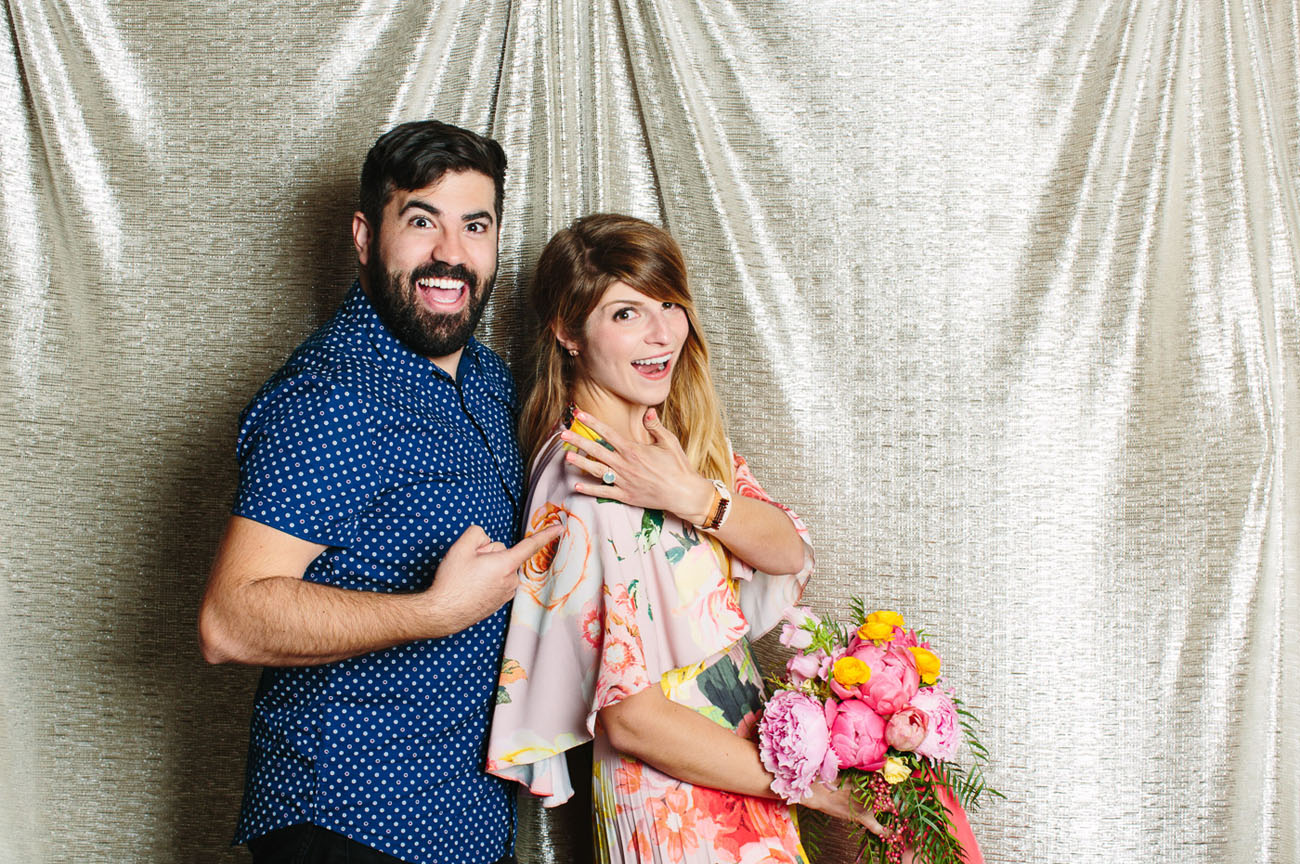 The absolute cutest, right!?! So much congrats to these two lovebirds! We wish you all the best and can’t wait to see what you dream up for your big day! ♥