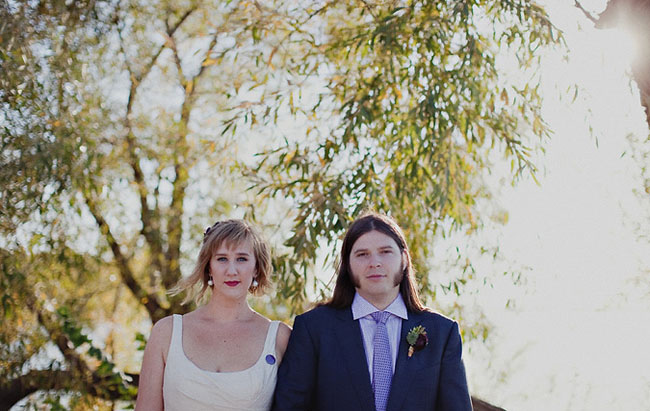 Anna + Andrew are both musicians and had such a fun + personal wedding full of DIY details. They both grew up outside of Wisconsin (her family is on the East Coast and Texas, and Andrew’s is in California), but rather than picking a destination, they decided to have everyone come to them since they currently live in Madison,Wisconsin. They’ve been in Madison for five years and really love it, so they wanted to convince their families that Madison was super rad – it is pretty rad, I’ve been there once and loved it! I love that they tried to keep everything as local as they could – including all the beer, the food, and the flowers. A bit more about the wedding from Anna…

When I started imagining our wedding, I knew I wanted something colorful, wild, and fun – just an awesome party. I hadn’t really committed to any colors but knew I wanted jewel tones, deep, bright hues, and a bunch of different colors involved – nothing too matchy. One of the turning points for the scheme of the day was the bridesmaids’ dresses. Louise at Sohomode was brilliant at finding dress fabrics that matched our bright, autumn vision, and we used their dress swatches to figure out Andrew’s party’s outfits – the closest thing matching all of the florals was aubergine, and we went from there. What blew my mind on the day of was that Erin (our florist, Daffodil*Parker) had found each girl’s actual flower – the one illustrated on her dress’s fabric – and incorporated it into her bouquet. I feel like the flowers absolutely made the look of the day.

Big thanks to Anda Marie Photography for sending over the lovely photos and congrats to Anna + Andrew! When we started planning and sent out our Save the Dates (using an illustration I’d commissioned from Ashley G for Andrew’s Christmas present in 2010), we got so much great feedback that we wanted something similarly cute & personal for the invitations. We asked our dear friend Lydia Conklin to draw a portrait of us – and on it, the heart with our initials became a running theme throughout the day. We used it on our invitations, programs, buttons, wall signage, photobooth, and welcome chalkboard – which is up in our living room now! Finding small details to pull the day together like that was really fun. 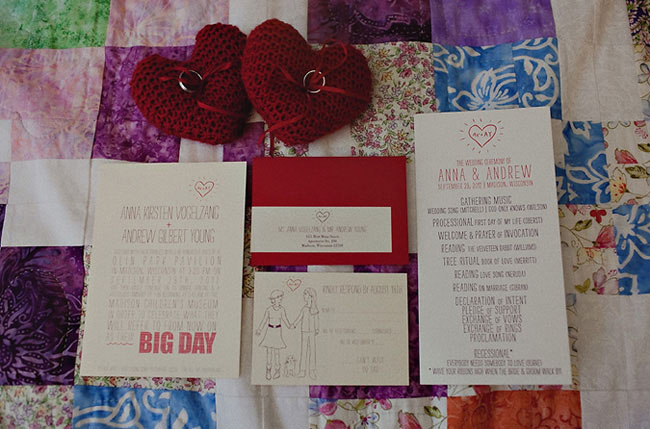 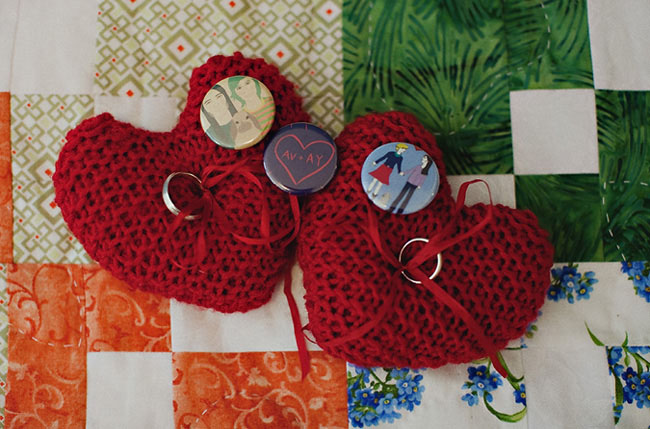 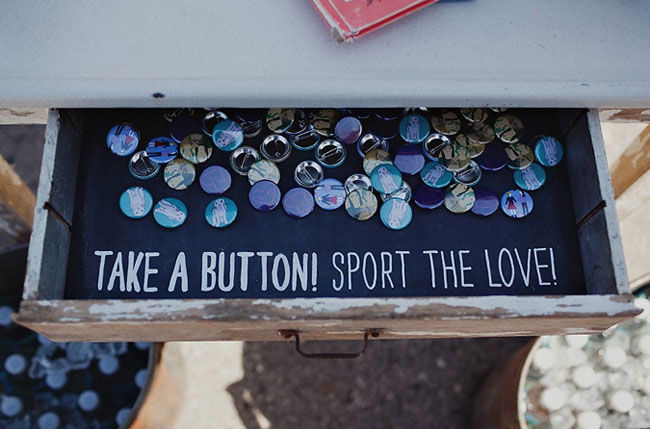 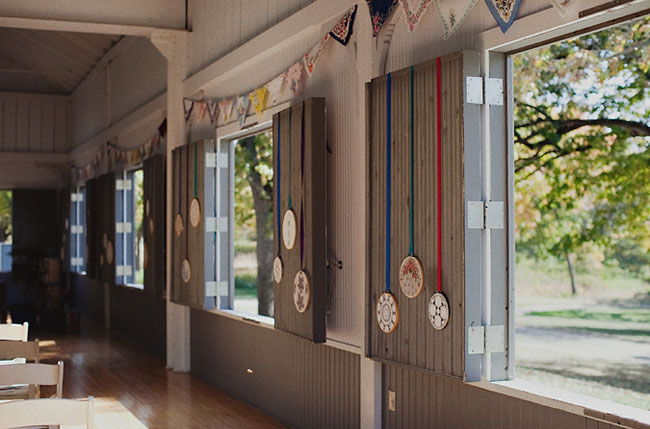 As for the ceremony, the starting point for the decor had been the hooped doilies – I’d found 9 or 10 at a craft fair by local vendor Little Dandelion Studios, and contacted her to ask if she could make me more. I was willing to craft a lot for the wedding, but one of the best decisions I made was letting go of the hunt-and-craft, and instead asking other folks to do things for me. I wouldn’t have been able to do it without their help. The doilies were a prime example – she ended up making me 30 more for our barn shutters, something I never would’ve had the time to do myself, nor the talent to do so beautifully. We wanted pops of color to go along with them, and had already chosen to make our own bunting banners with antique handkerchiefs we’d been collecting, so hooping some of those to match the doilies seemed like an easy supplement. Andrew’s mom and aunt ended up putting those together the week of the wedding. 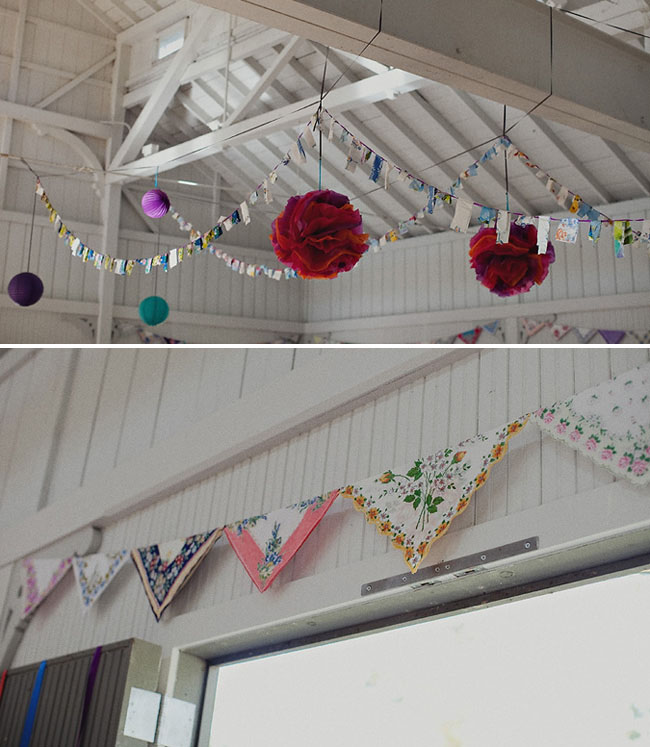 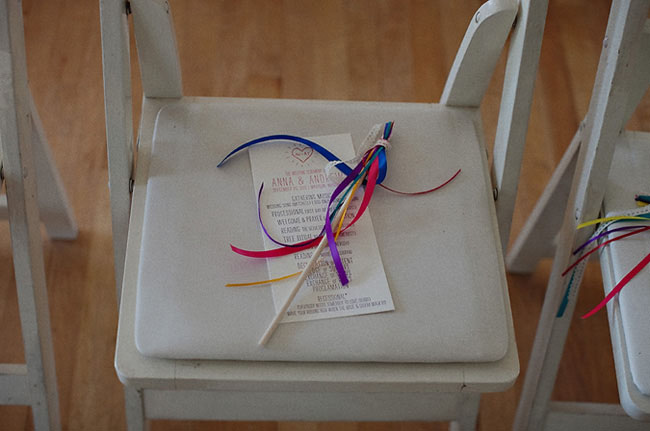 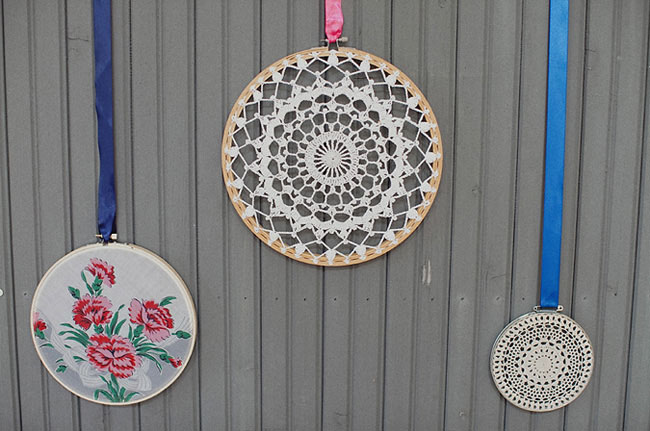 Recessional: Everybody Needs Somebody to Love – Wilson Pickett 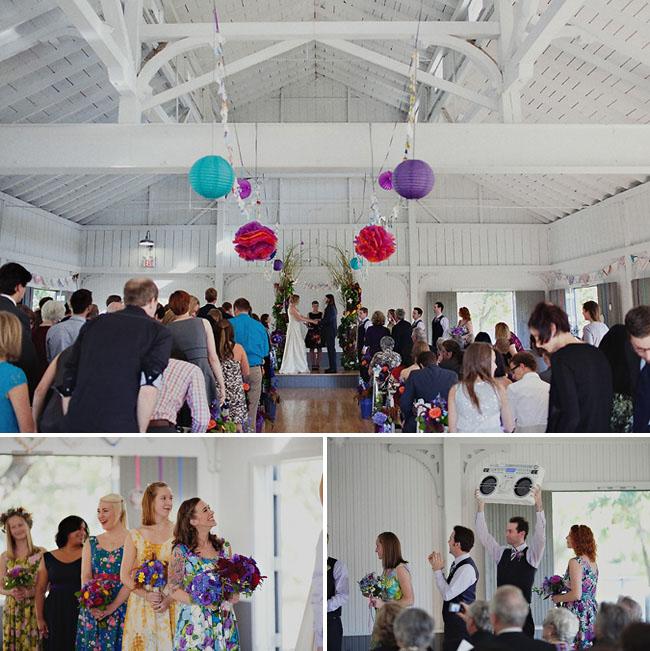 Andrew: Definitely the ceremony - I liked how it was really our own, and we were able to make it thoughtful & spiritual without making it stuffy. I was also really happy with the music. We were surrounded by great musicians but it seemed like, because they were all our friends, it wasn't a pain or just another gig, but that they were really happy to play. It was a great vibe & we knew all of the music was in great hands.

Anna: The ceremony was really special. A friend of mine had told me that she'd memorized her vows before her wedding, carrying them with her on a card for months, because she wanted to really know what she was promising. I really loved that idea. Andrew & I wrote our vows together a few months before and planned to recite them from memory at the ceremony, so we tested each other at random times leading up to the wedding - as a toast before dinner, driving to the grocery store, etc. When we actually said them during the service, I knew I was going to cry, but I was just a mess. It was the sweetest moment of the day.

We also exchanged cards during our first look and there was something quiet and magical to that - a really nice meditative moment before all the hoopla. 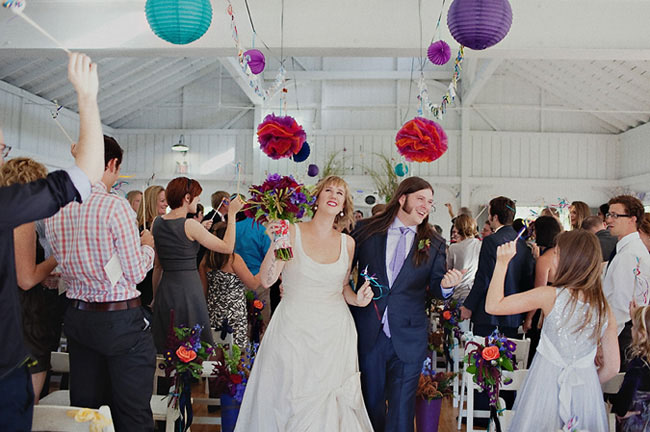 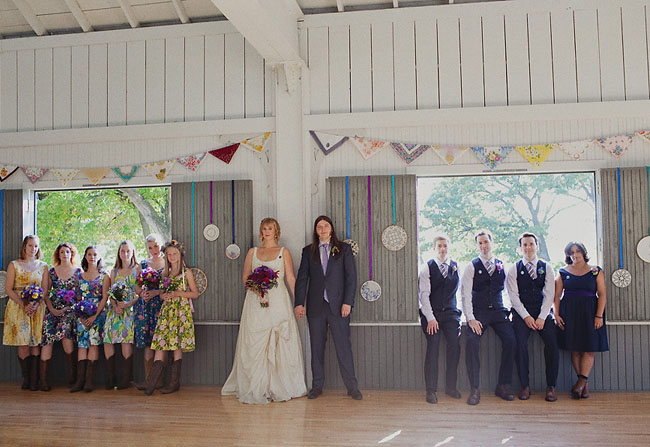 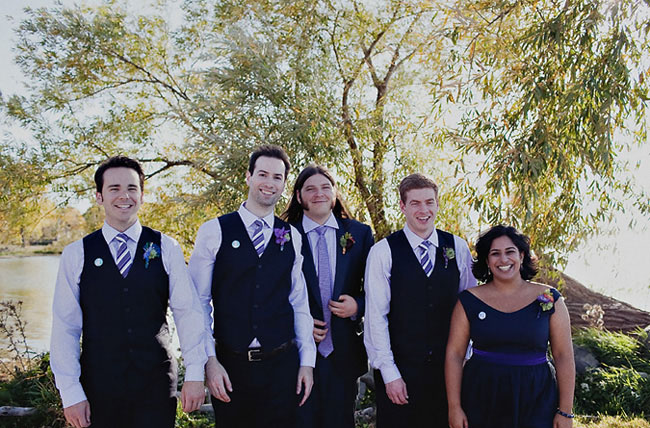 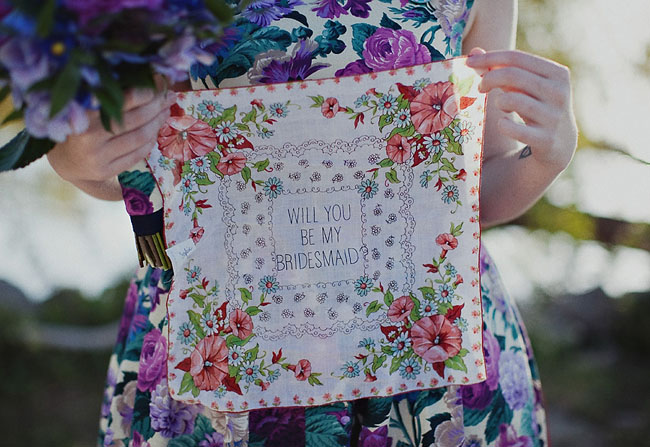 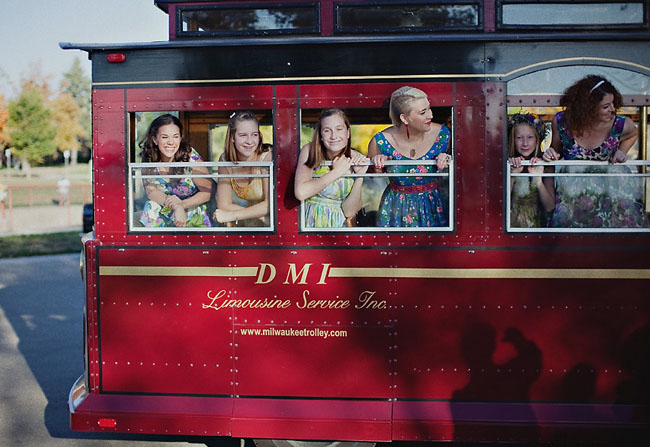 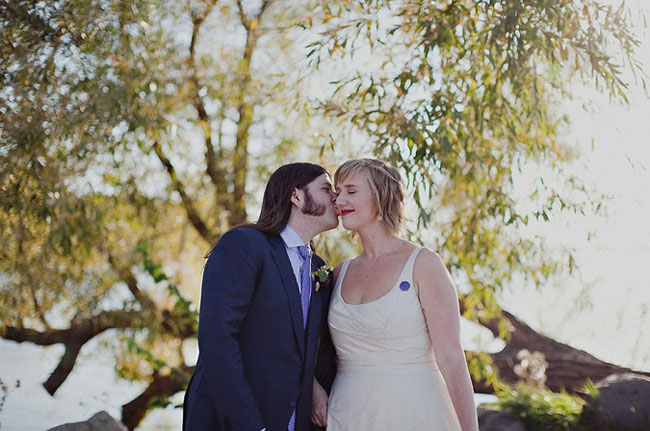 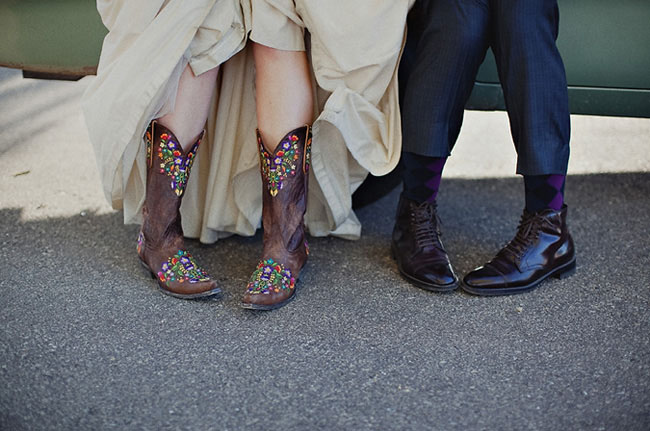 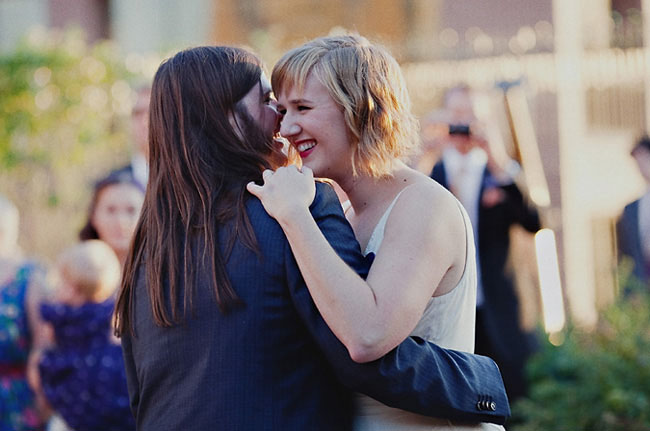 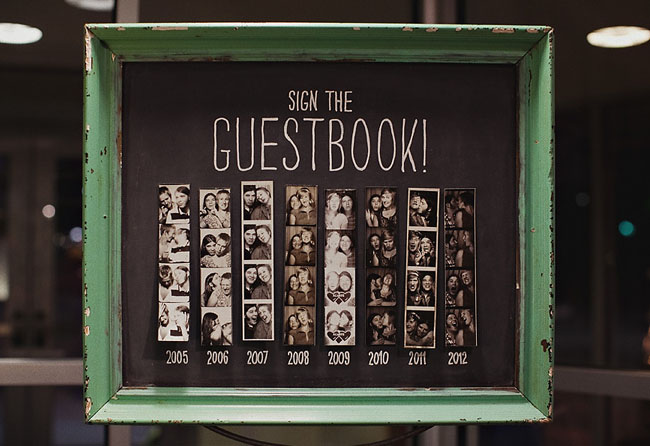 So many people encouraged us to focus on the details because they really would represent who we are as a couple, and it was so true. Taking the time to hunt, craft, or really create the little things made a difference, and everyone in attendance gave us great feedback on it. Buttons were an obvious choice for us because I make them when I go out on tour and we have that rhythm down, so they were done super quickly. It also ended up being a fun favor that people could take with them, and I love that everyone has one on in the photos!

Especially when I’m out on the road, I love scouring antique shops – as does Andrew’s mom – so once the two of us got started looking for specifics – like the champagne glasses, handkerchiefs, ball jars, salt & pepper shakers, patio cloths (for the napkins), and a few other pieces that ended up in the decor – the tulip bowl & large turquoise jars that served as vases – we were on a mission. I loved having a project to be on the hunt for. Andrew & I also spent time making the ribbon shakers, escort cards, and champagne tags. We actually had a wedding crafting party where all of our friends came over & helped us make stuff – we got all of the shakers done in one night! We never could’ve done it without their help, it was essential for us to have a team. Both of our families are spread out but they helped us from afar. As Andrew’s mom & I collected the table cloths, we’d each cut them into squares and ship them to my mom, who’d hem them into napkins. 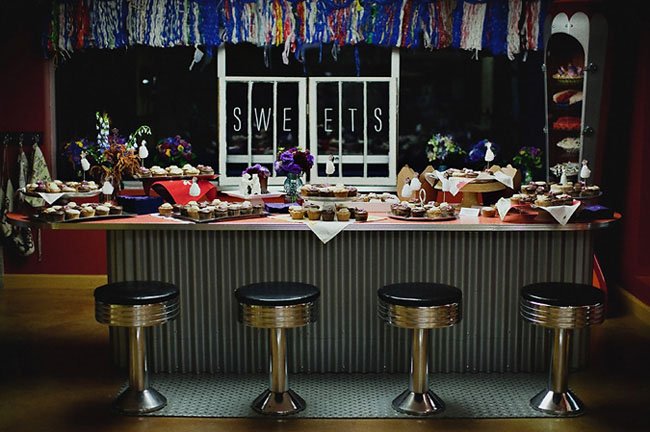 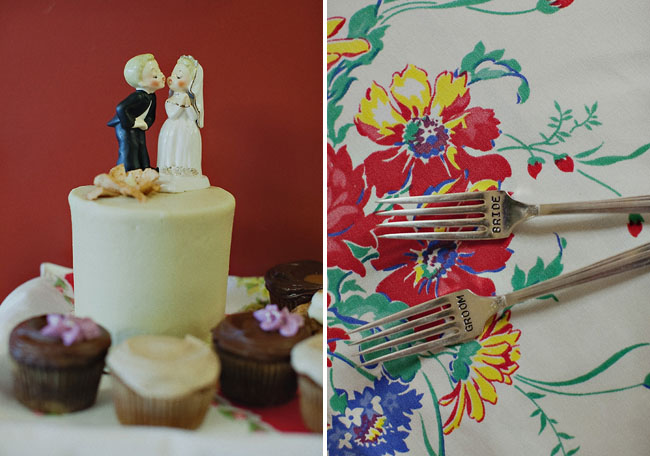 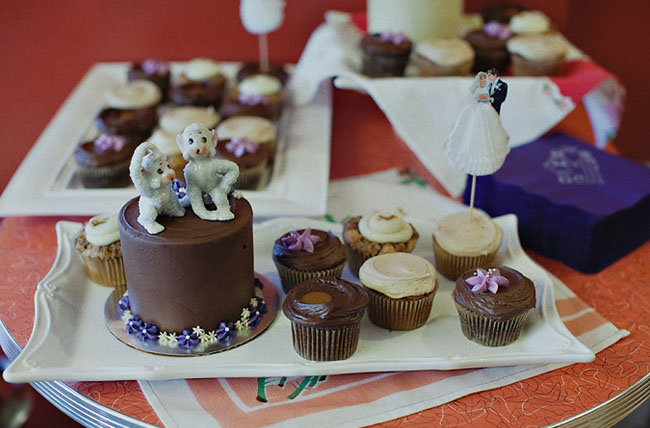 Playing together at the reception was probably my third favorite moment of the day. It was so great to play with all of our friends and family there – having everyone sing along was beyond perfect.

I felt really lucky to work with all the vendors we did. I had really specific wants, and had such faith and respect for all of our vendors that I knew once I’d explained a vision to them, they’d make sure they went off without a hitch. I felt as though our vendors were the most valuable investment we could make.

Leading up to the wedding: delegate responsibility & ask for help, get a day-of coordinator, & don't skimp on the details. Work consistently over a longer period of time so it becomes part of your routine. Sometimes it seemed dumb to be rubber stamping or working on our ceremony script so far out from the date, but the more things as you can knock off the list, the better.

Also really work as a team. Breaking up tasks was really helpful for us. Andrew took care of a lot of the vendor business while I did a lot of the styling and crafting, but he wasn't without opinions and made sure I included him when I was off in my own world. Some of the best ideas – the LPs as the centerpieces and the boombox during the ceremony, to name a few – came from him.

Once the wedding week comes: just let it go, relax if you can, & be as present and joyful during the day as possible. If it's a fun gathering and it reflects you as a couple, it will feel like the best party ever. And it probably was.