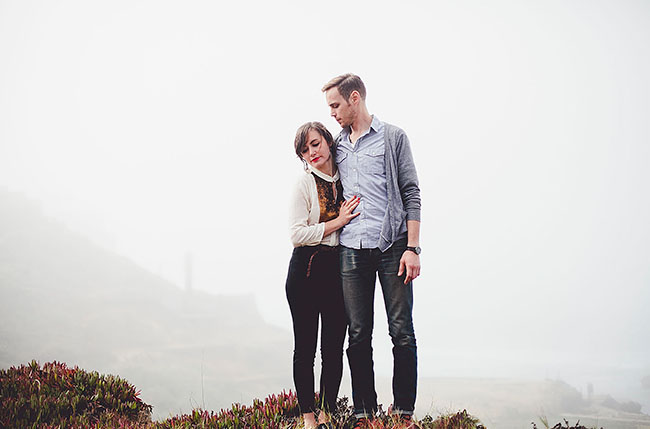 Cassy + John are all kinds of cute. And they totally rock in our book because they weren’t afraid to climb giant cliffs + caves, run through the chilly ocean water, and traipse through the forest for their super rad San Francisco engagement session with Jamie Jones Photography. All that made for a memorable + adventurous day – and the photos they came away with are just so good. The location they choose – SF’s Sutro Baths – was once a large, privately owned swimming pool complex built in the late 19th century. The facility was financially unprofitable and is now abandoned and sits in ruins. A cool bit of NorCal history, and a perfect shoot backdrop for this stylish, creative couple! 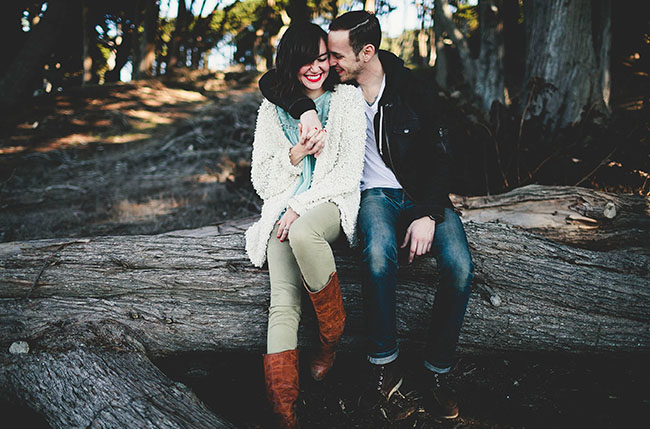 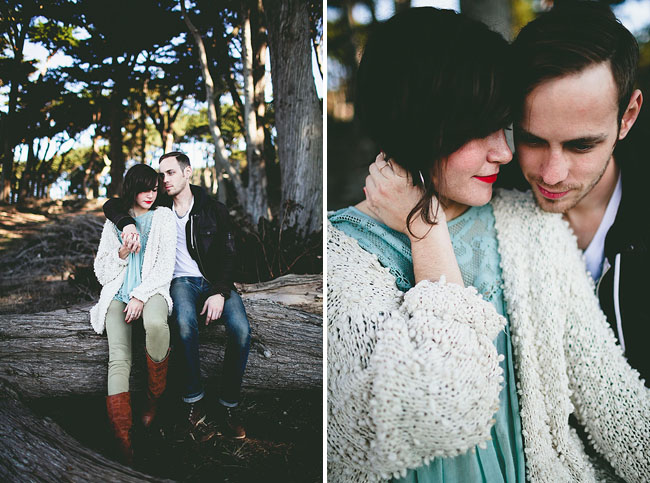 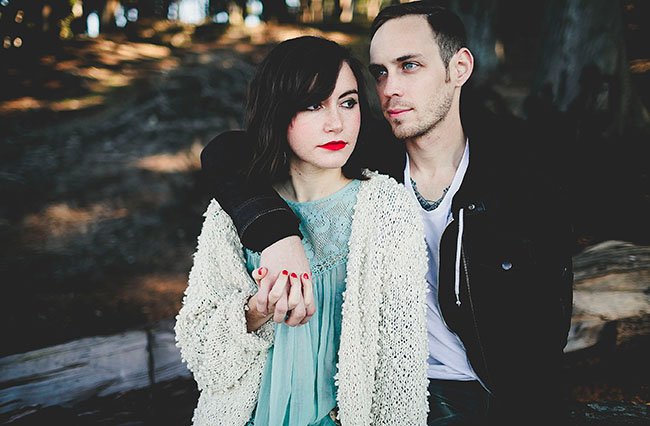 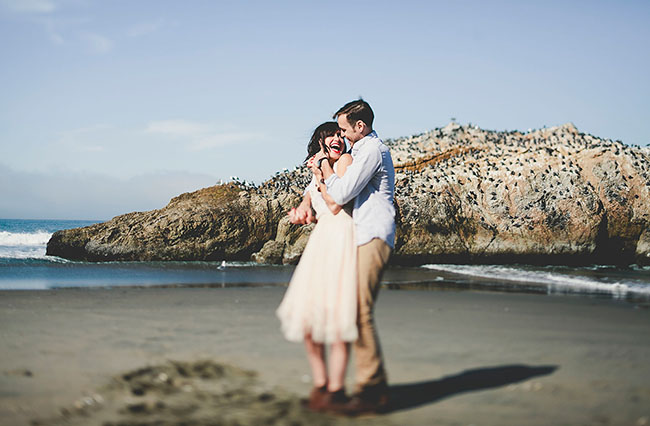 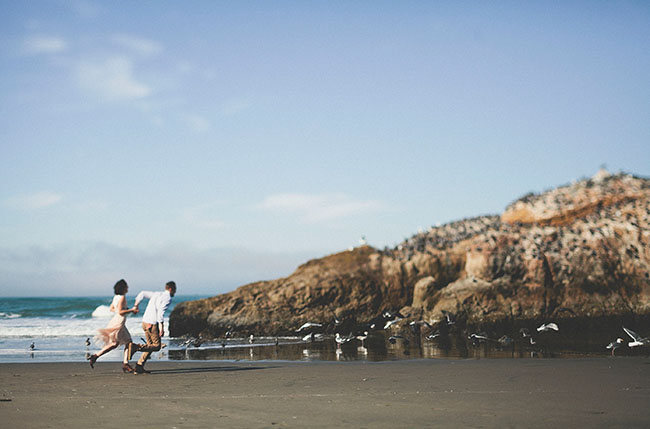 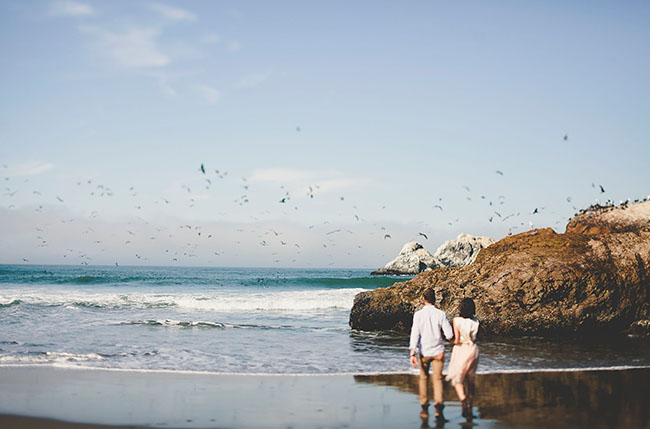 These shots with the birds are pretty breathtaking! 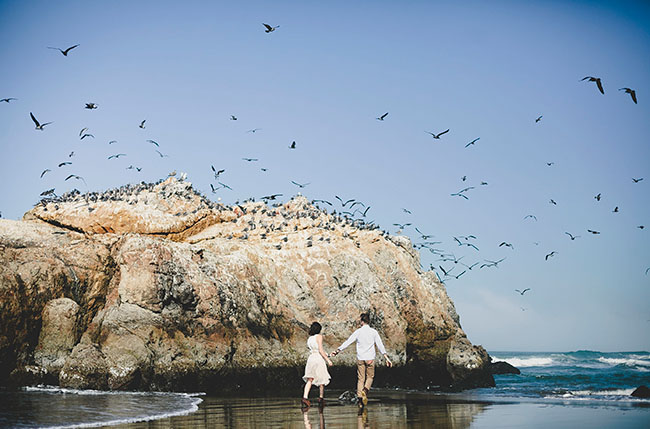 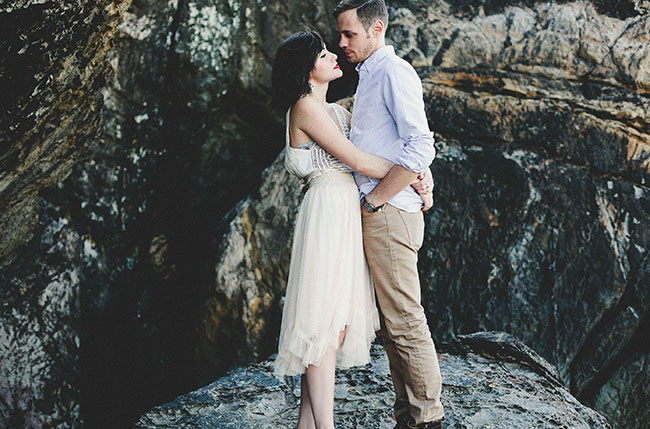 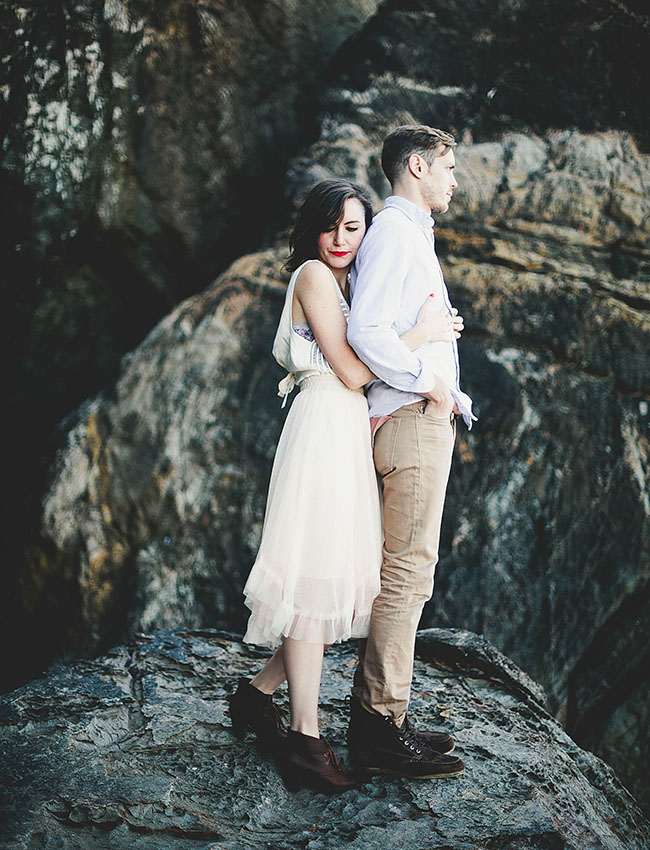 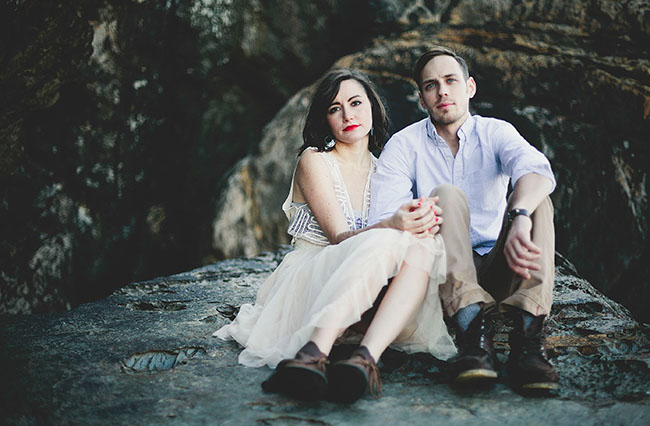 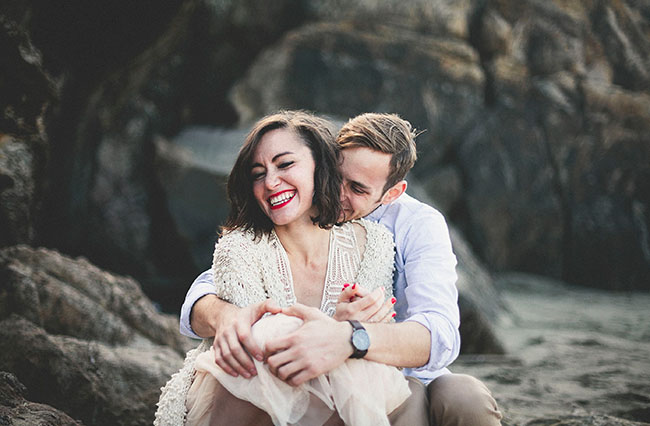 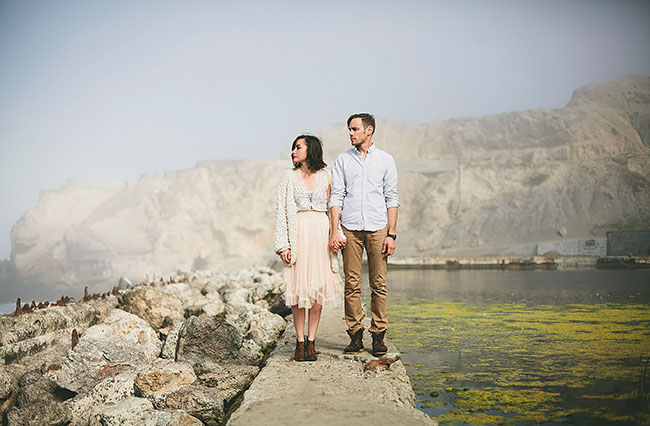 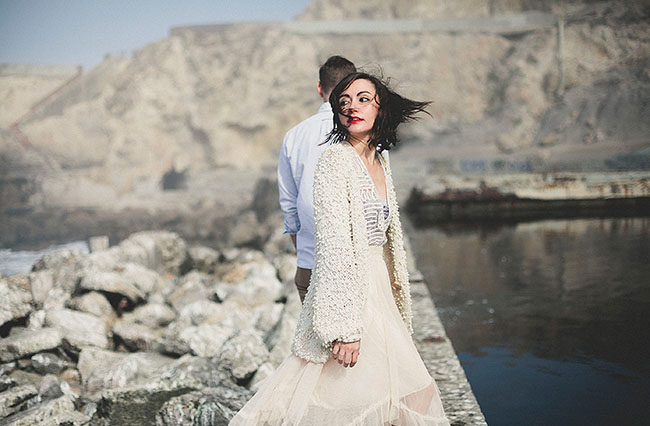 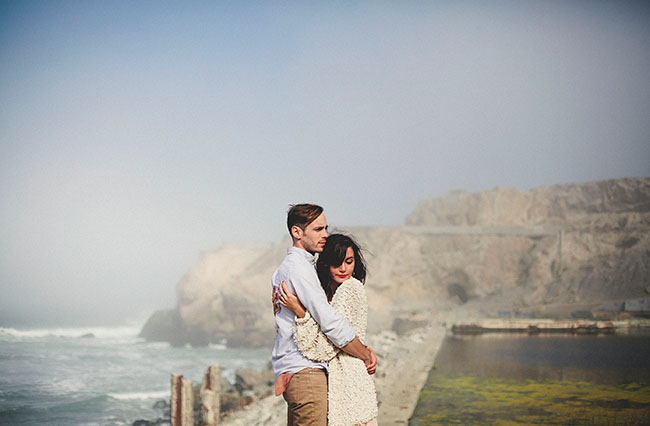 Cassy, how did you manage to hike to such heights in that uber-adorable outfit of yours? Spill your secrets, girl! 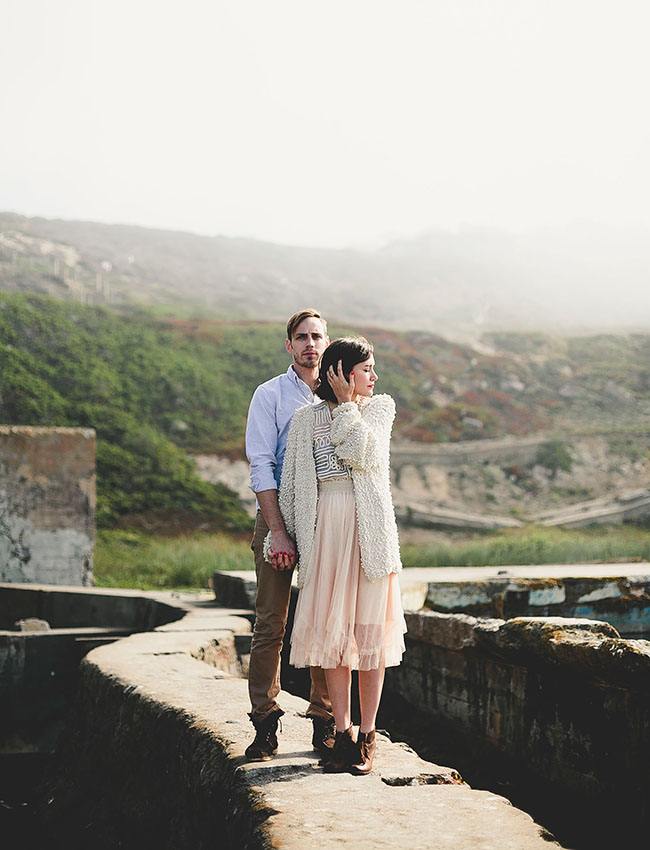 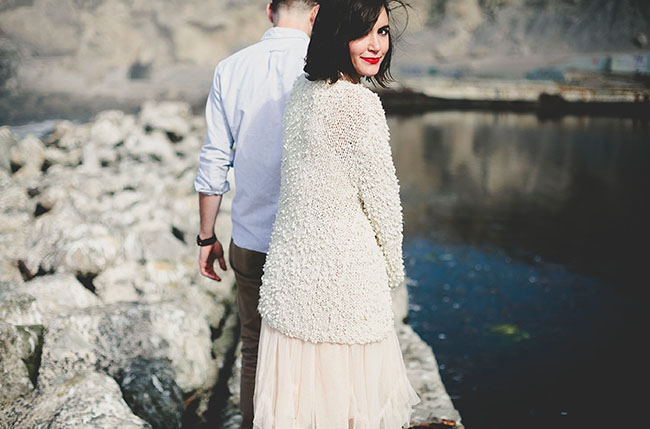 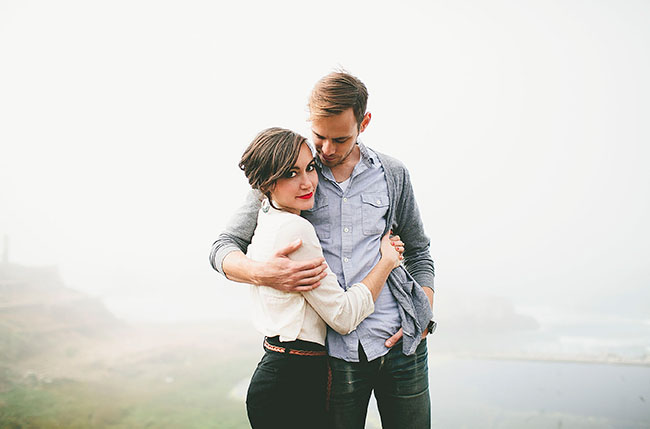 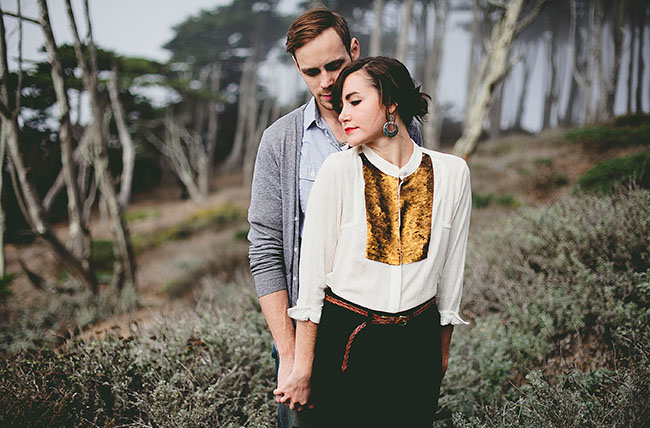 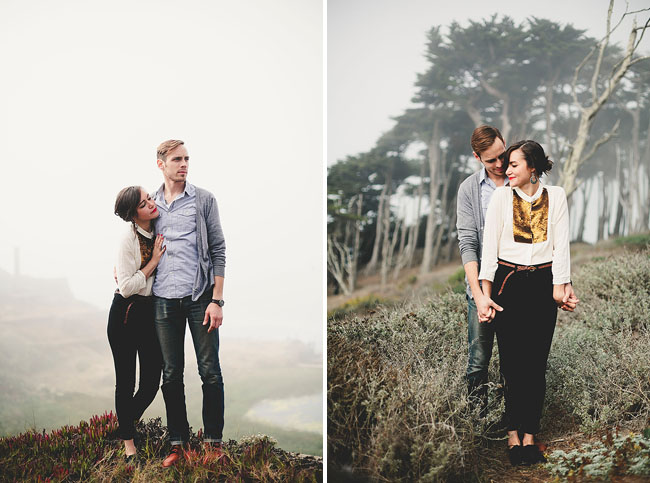 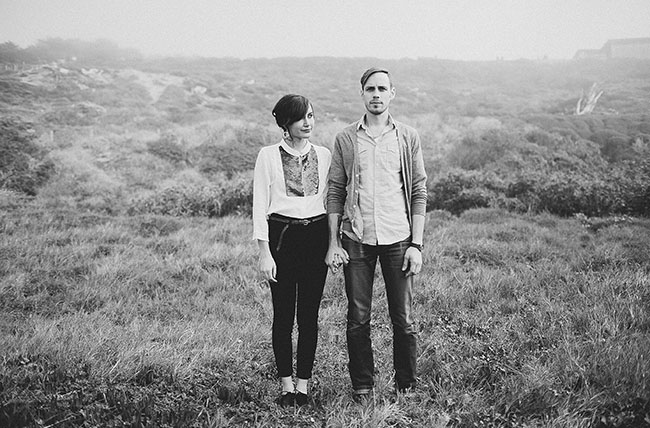 We met shortly after he had moved out to Portland, OR from Nashville to live with a mutual good friend of ours (I was living in Eugene at the time). We were both dating other people, but became casual friends over the years when I would visit and crash on their couches. He always left quite an impression, as I remember admiring his thoughtfulness over the nights around the campfire in their backyard talking religion, philosophy and life, but what really stood out was how funny he was. I was always laughing around him.

I was visiting Portland to look into moving and to see a friend’s band play at a local bar. He ended up coming along with a friend, and somehow we ended up on the back patio talking for hours, practically finishing each other’s sentences. It was uncanny how much of a connection we had and never realized it. I had recently gone through a bad breakup, and Johnny graciously waited about 6 months to finally ask me out. After our first date, it was pretty obvious to both of us that this was something different.

We immediately decided to jump into our relationship by taking a roadtrip throughout the Southwest with each other. Our friends guaranteed us that, at the end of our trip, we would either love each other or hate each other after spending that much time together so soon. Suffice it to say, we had discussed marriage by the end of that trip, and we both just knew we had finally met our other half.

Cassy + John, big time congrats on your engagement + thanks for sharing your photos with us!